You have permission to edit this page.
Edit

Diane Ford speaks at the first meeting of the Accepting Our Neighbors group at Upper St. Clair Township Library in 2019.

For several seconds that seemed much longer to those listening, Diane Ford had to take a moment to compose herself.

She was giving a presentation to Bethel Park School Board when she started to describe her grandson being subjected to racial slurs on a school bus.

“In recent years, these types of incidents have impacted the entire district,” she finally said while continuing to quell her emotions. “There are countless stories I can share, way too many to ever present in this forum.”

Ford attended the board’s final June meeting to provide a progress report on a Cultural Competencies and Inclusion Initiative she has led at the high school during the past two academic years. She prefaced her comments with a brief history of her family, starting with her great-grandfather moving to the Coverdale neighborhood of Bethel Park in 1927.

“I grew up in Coverdale on Cherry Street, and it was a type of utopia,” Ford recalled. “Many people with different ethnic backgrounds looked out for, took care of and loved each other. We ate together. We played together. We slept at each other’s houses. And of course, we got in a whole lot of trouble together.

“When we left Cherry Street, just blocks from our utopia, the world that we entered was not so loving, not so caring and not so accepting.”

One of six African-American students in Bethel Park High School’s Class of 1985, among roughly 555 graduates, Ford has remained in the municipality and is a longtime observer of local issues involving race.

“Growing up in Bethel Park presented its challenges, and I was certainly not the person who would walk away from any challenge, which brings us here today,” she told the board.

She has worked with the school district on attempting to promote unity and a better sense of understanding. In 2014, she and Tracy Ford, her sister and Bethel Park High School nurse, formed a club called STAND, Stand Against Negativity and Discrimination.

The Cultural Competencies and Inclusion Initiative started at the high school in 2018, with Diane Ford presenting an introductory assembly in the auditorium. Out of more than 1,000 students, she reported, 25 signed up for the program.

During the just-concluded academic year and before COVID-19 closing school, seven students were attending sessions, held during lunchtime, regularly.

“I believe that we made some good strides in hearing from the students who participated in the inaugural stages,” Ford told the school board. “They were able to share their thoughts, their ideas, and provide some insights based on their lived experiences.”

But limiting participation to high schoolers does not represent what she originally envisioned.

“My goal was to have a districtwide initiative, and it still is,” she said, optimally involving all stakeholders from kindergarten students through administrators and school board members.

Ford has submitted a proposal for such a program, with a recruitment plan and marketing strategy, for board members’ perusal.

“We have to do something now, that’s not going to take years to begin to implement,” she asserted.

In an interview after the school board meeting, Ford spoke about the general reluctance she has encountered in broaching topics related to racism.

“When was the last time a white person talked to a Black person about any of these issues? Nobody does that,” she reported. “No one has approached me and said, ‘Diane, I would like to talk to you about this. I would like to understand X, Y, Z. I genuinely want to know.’

“How do we ever heal if we don’t have these discussions?”

She also calls for moving beyond limited-scope, or what she terms “Band-Aid,” approaches to addressing problems:

“What people have to realize is that they cannot continue the same old way and think that they’re going to get different results.”

Club members voted for David Wylie, 2019-20 president, as Rotarian of the Year.

Kate Cole, new president of the McMurray Rotary Club, has the full support of her husband, Chris.

The sounds of a Peters Township youth baseball game weren’t precisely what Kate Cole was expecting to hear.

As the McMurray Rotary Club’s president-elect, one of her responsibilities was to organize the annual President’s Dinner, celebrating a year of accomplishments and looking ahead to the next 12 months. Following club tradition, she made arrangements for a formal event at an upscale venue. 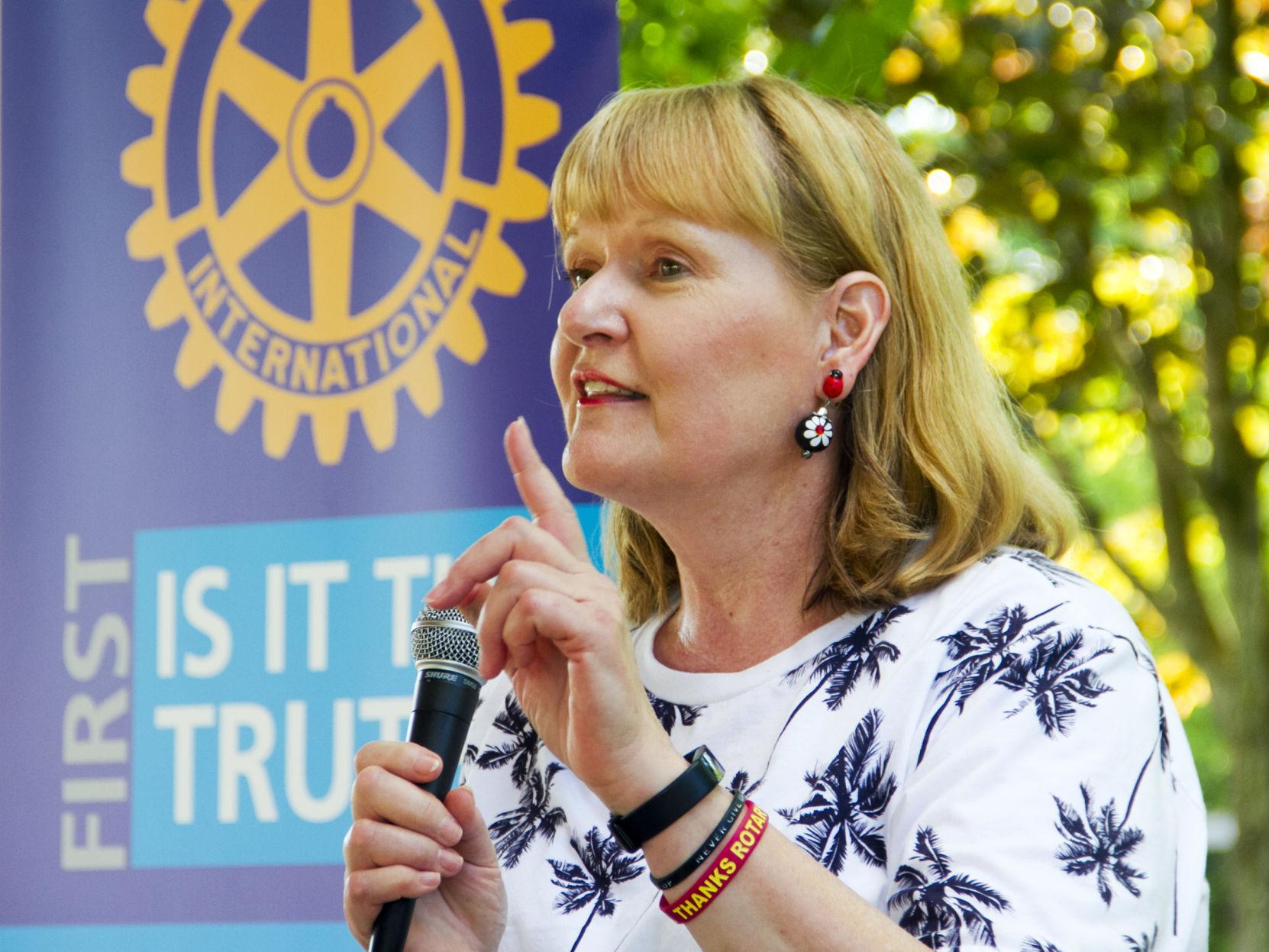 Stephanie Urchick, a Rotary director at the international level, is the first woman to have served as governor of District 7300.

Then, about 48 hours before the scheduled start, club members received notice that because of concerns related to COVID-19, the venue had shifted to Peterswood Park, in what turned out to be well within earshot of a ball field.

“We’re in a park shelter,” Cole acknowledged during the July 1 event. “There’s no part of any of our plans for this year that included a park shelter. But we’re here, and we’re doing it.”

The change of scenery represented the latest of the club’s adjustments to the worldwide health crisis. For example, with regular meetings not occurring as usual on Wednesdays at Atria’s Restaurant, members starting getting together weekly by videoconference.

“I’m really happy to see everybody in person,” Cole said at the start of the President’s Dinner, which, because of circumstances, ended up including no dinner. “It has been – I counted it the other day – 112 days since we’ve had Rotary together, and this is just fantastic. Thank you all for rolling with the punches with our last-minute change.”

The event typically features the handing out of awards and other symbols of recognition. But also because of COVID-19, this year’s recipients followed the social-distancing protocol of retrieving items from tables, with no accompanying handshakes. 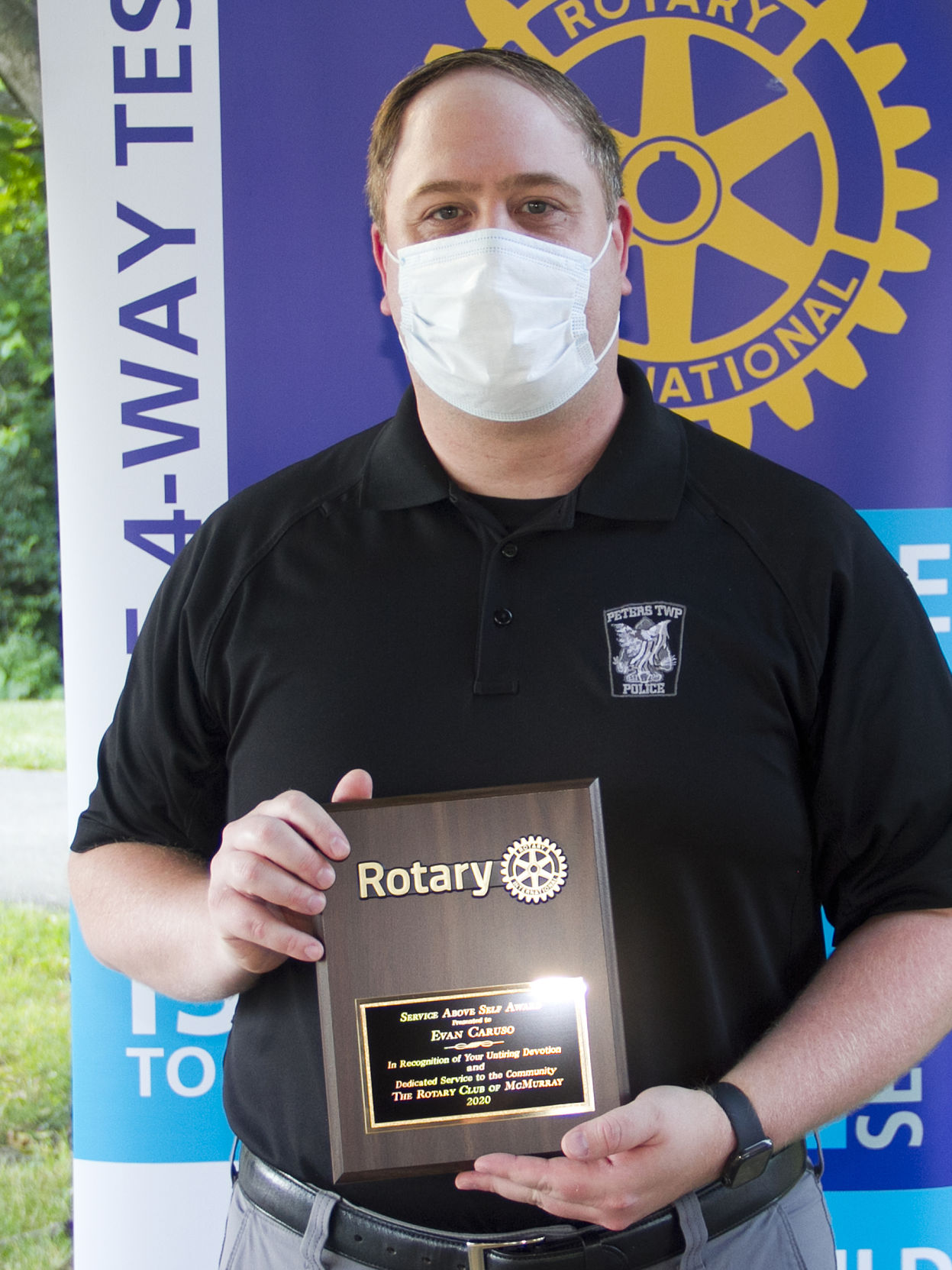 A Service Above Self recipient is Detective Evan Caruso of the Peters Township Police Department.

Among the honors accorded each year is the Service Above Self Award, which usually goes to a club member. For this year, members decided to recognize someone from the Peters Township community.

“We were looking for an individual to recognize. That turned out to be quite a challenge, because there are so many people in our community who do a lot of good,” board member Jim Mortimer said. “So today, we’re going to recognize three people.”

Among the honorees was Lt. Jordan Cramer of the Peters Township Fire Department, who worked with the Rotarians in setting up a “neighbors helping neighbors” program for people affected by COVID-19. 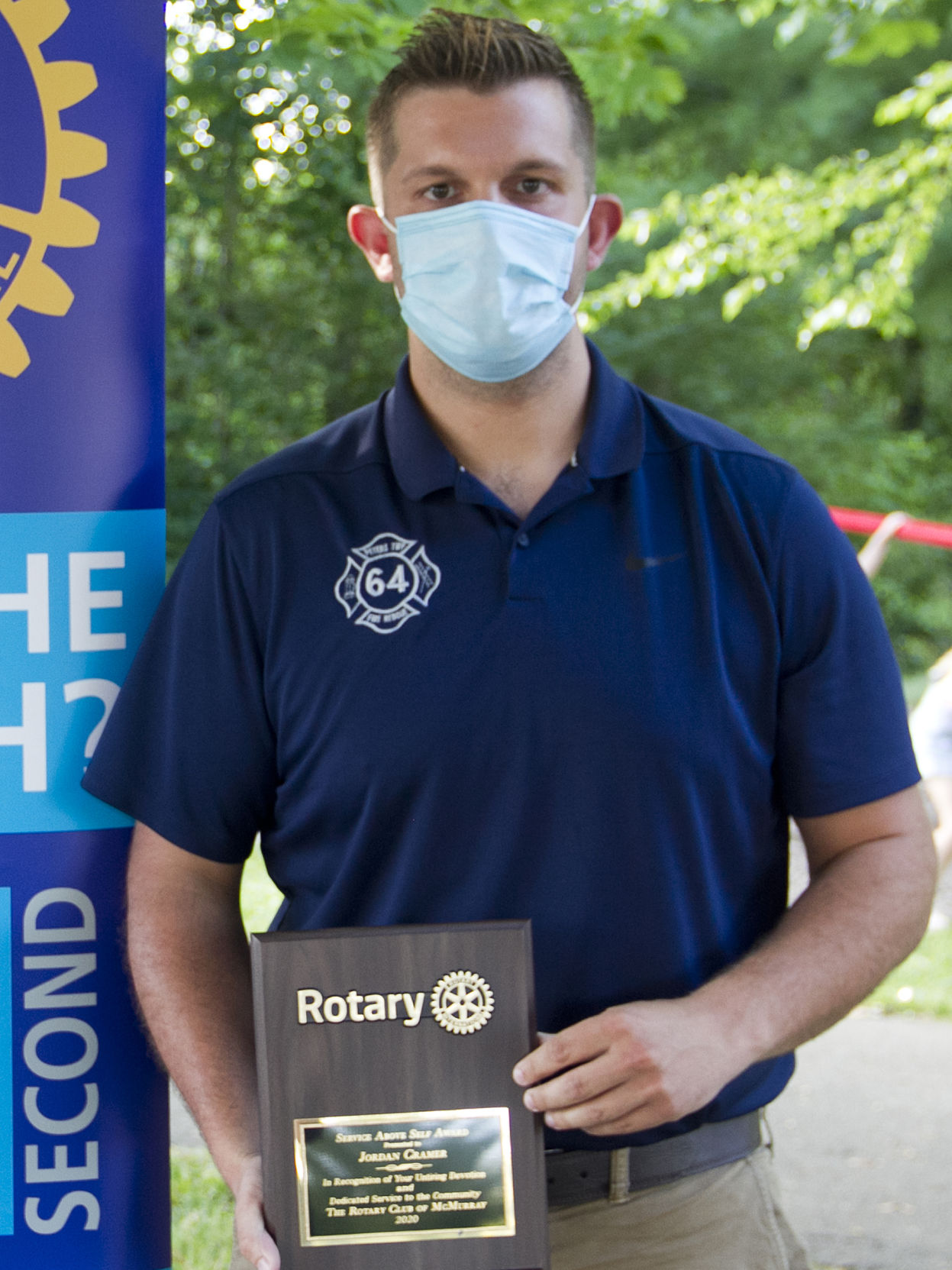 A Service Above Self recipient is Lt. Jordan Cramer of the Peters Township Fire Department.

“Fortunately, we didn’t have to implement anything,” Mortimer reported. “But we were behind him and the rest of the fire department.”

The other Service Above Self recipients were township police Detective Evan Caruso and Dan Price, a paramedic and senior supervisor for Peters Township Ambulance Service.

Within the club, a vote among members resulted in Rotarian of the year honors going to David Wylie, who served as president for 2019-20.

“This Rotarian has done a fantastic job in not only running the club meetings but also making sure that everybody feels like they were engaged,” longtime member Al DeLucia said in making the announcement.

For 2020-21, DeLucia is serving as governor of Rotary International District 7305, leading a region that extends from the state line east to Cambria County. He is the first McMurray Rotarian to hold the distinction. 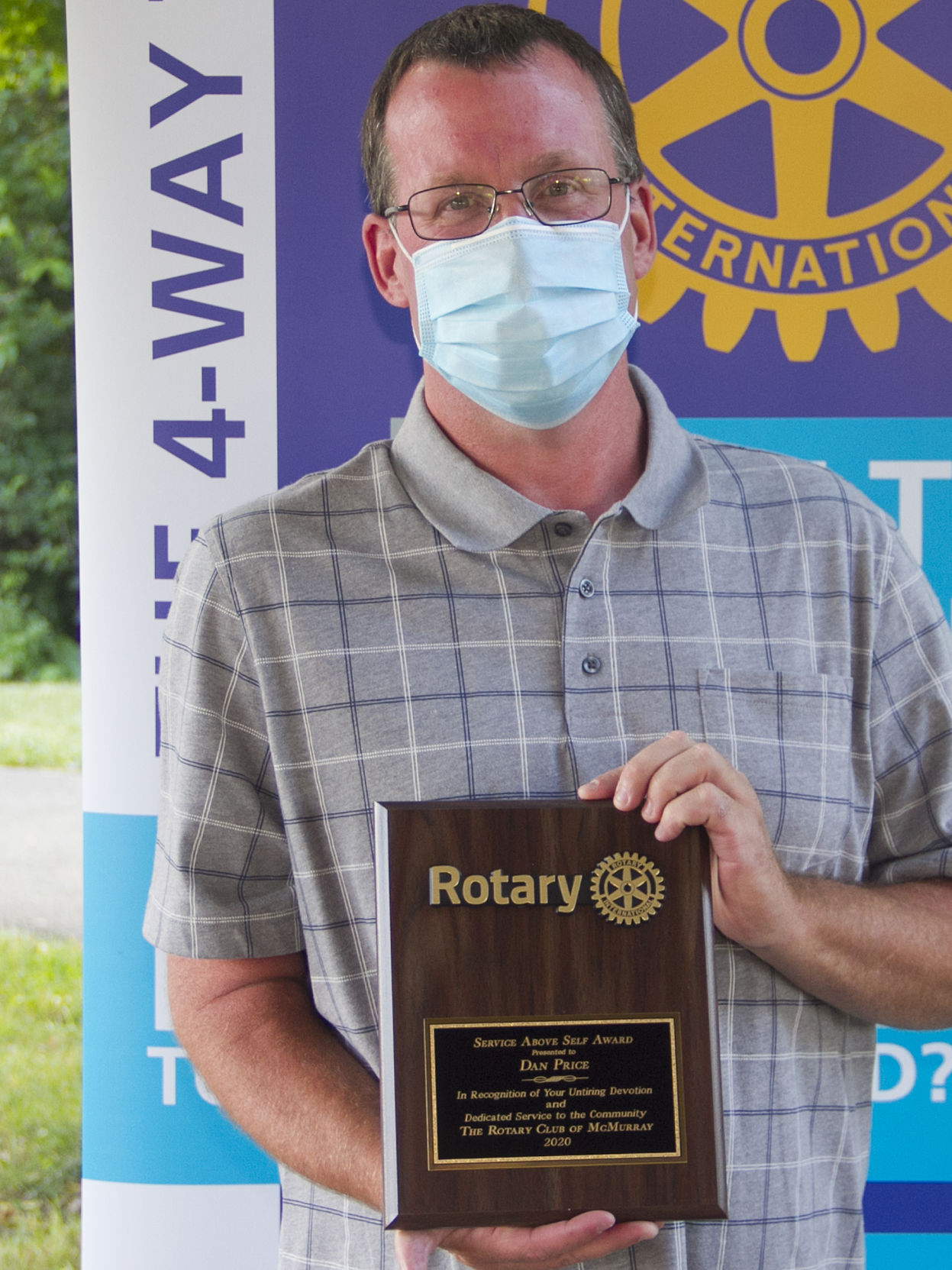 A Service Above Self recipient is Dan Price of Peters Township Ambulance Service.

For his part, Wylie said that although COVID-19 caused the cancelations of many planned activities, the club still made a substantial impact in supporting community organizations:

“My figure was that the total raised and distributed over the last 12 months was $41,748.”

For Cole – whose grandfather Paul Groff and father, Larry Winter, were club members – the new leadership represents quite a change for an international organization that excluded women until the 1980s. In fact, she announced an initiative to continue growth in that regard.

“We’re at about 30 percent women’s membership right now,” she said. “My goal is 50 percent in the next two years.”

Swearing in Cole, along with other club officers and board members, was Stephanie Urchick, a McMurray Rotarian who serves internationally as director of Zones 33-34, and area that takes in Western Pennsylvania to the Caribbean. 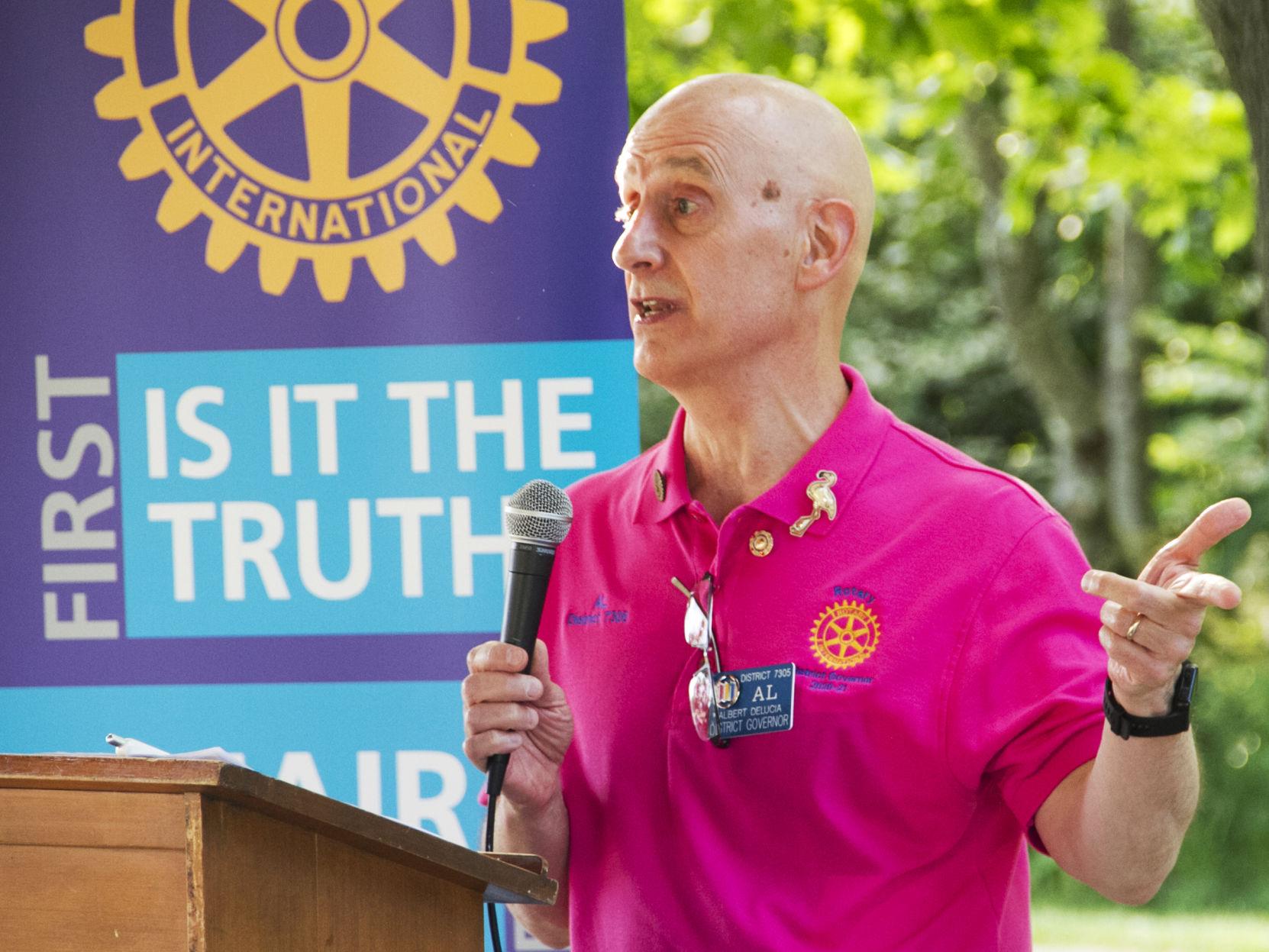 “One of the reasons I’m here tonight is that I’m not traveling. I’m grounded. We’re not going anywhere until next year, if even then,” she said about the organization’s world leaders. “Rotary did that as a precaution, keeping the health and safety of members at the forefront.

As a result, she has shifted to meeting virtually with people on multiple continents, without having to leave her North Strabane Township home. And by the same method, she also has been able to participate in her home club’s meetings.

“We loved getting together every week at Atria’s and shaking hands and hugging and doing all the things that we did. And suddenly, it was ripped from us,” she said. “But we kept doing what the world is craving. The world wants connection.”

In fact, the club has gained a new member since hosting solely online meetings: Sydnee Romanko, who at Peterswood Park had her first opportunity to meet most of the other members in person. 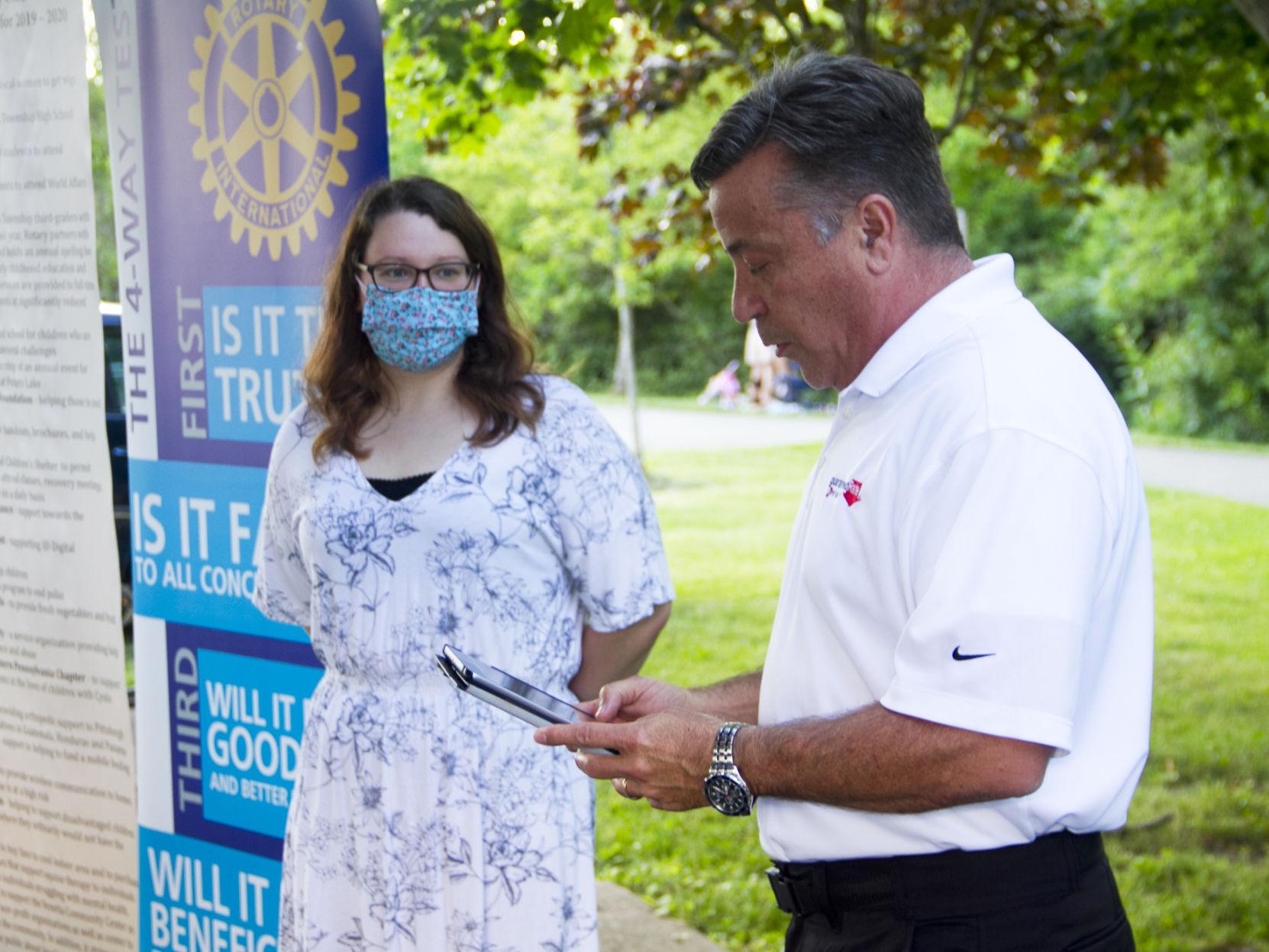 Also during the event, three members – Pamela Linnon-Flinn, Myra Oleynik and District Judge Jesse Pettit – were designated as Paul Harris Fellows, named for Rotary’s founder. The honor acknowledges individuals who contribute $1,000 or who have such contributions made in their name to The Rotary Foundation, which supports humanitarian, educational and cultural exchange programs worldwide.

Two other members, DeLucia and Romain Frieden, were recognized for additional levels of Rotary Foundation support.

In accepting her presidency, Cole spoke about meeting the challenges presented by current circumstances while continuing to fulfill Rotary’s philanthropic mission. 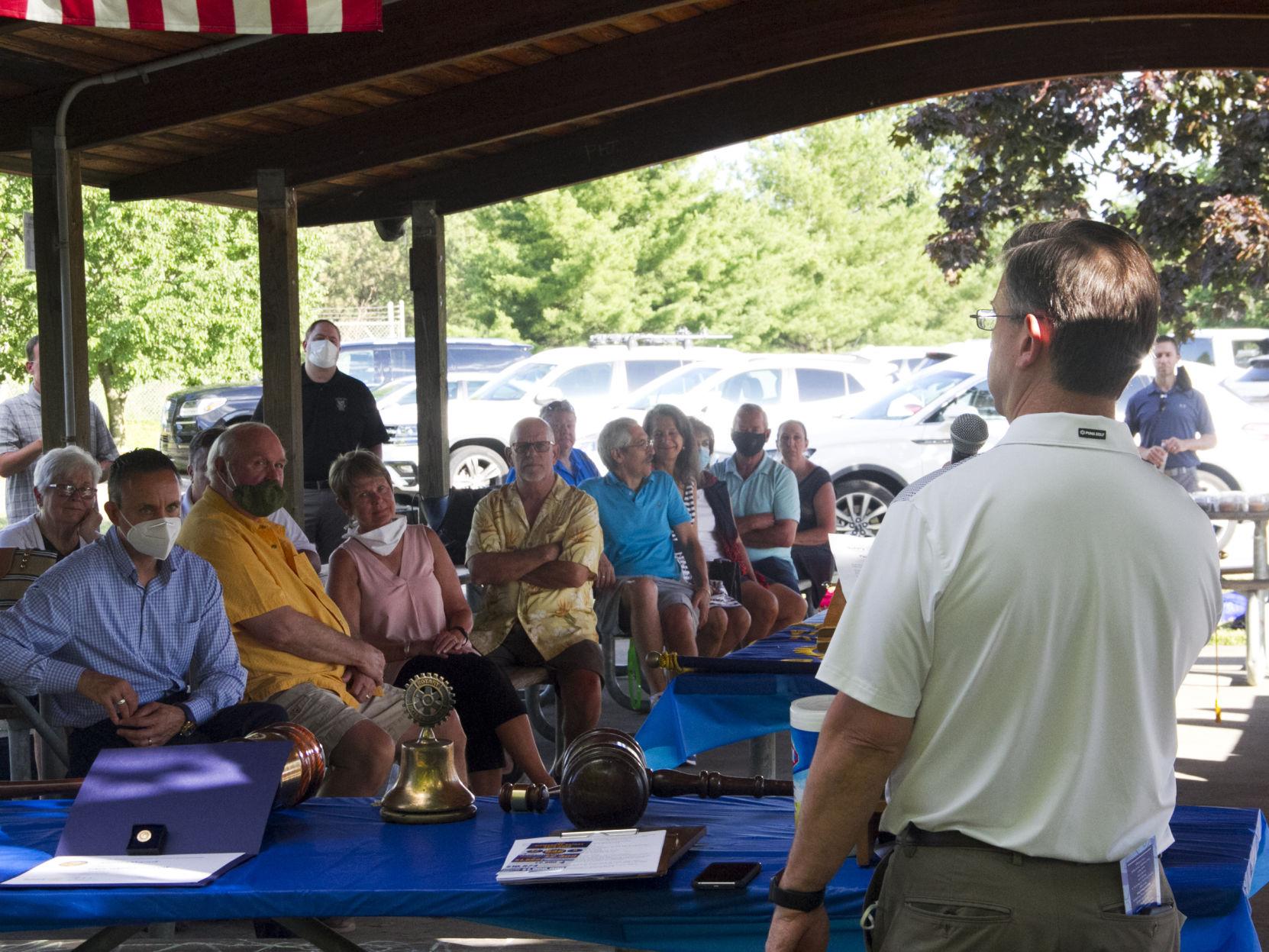 A Peterswood Park picnic shelter serves as the location for the President’s Dinner, which this year does not include dinner. 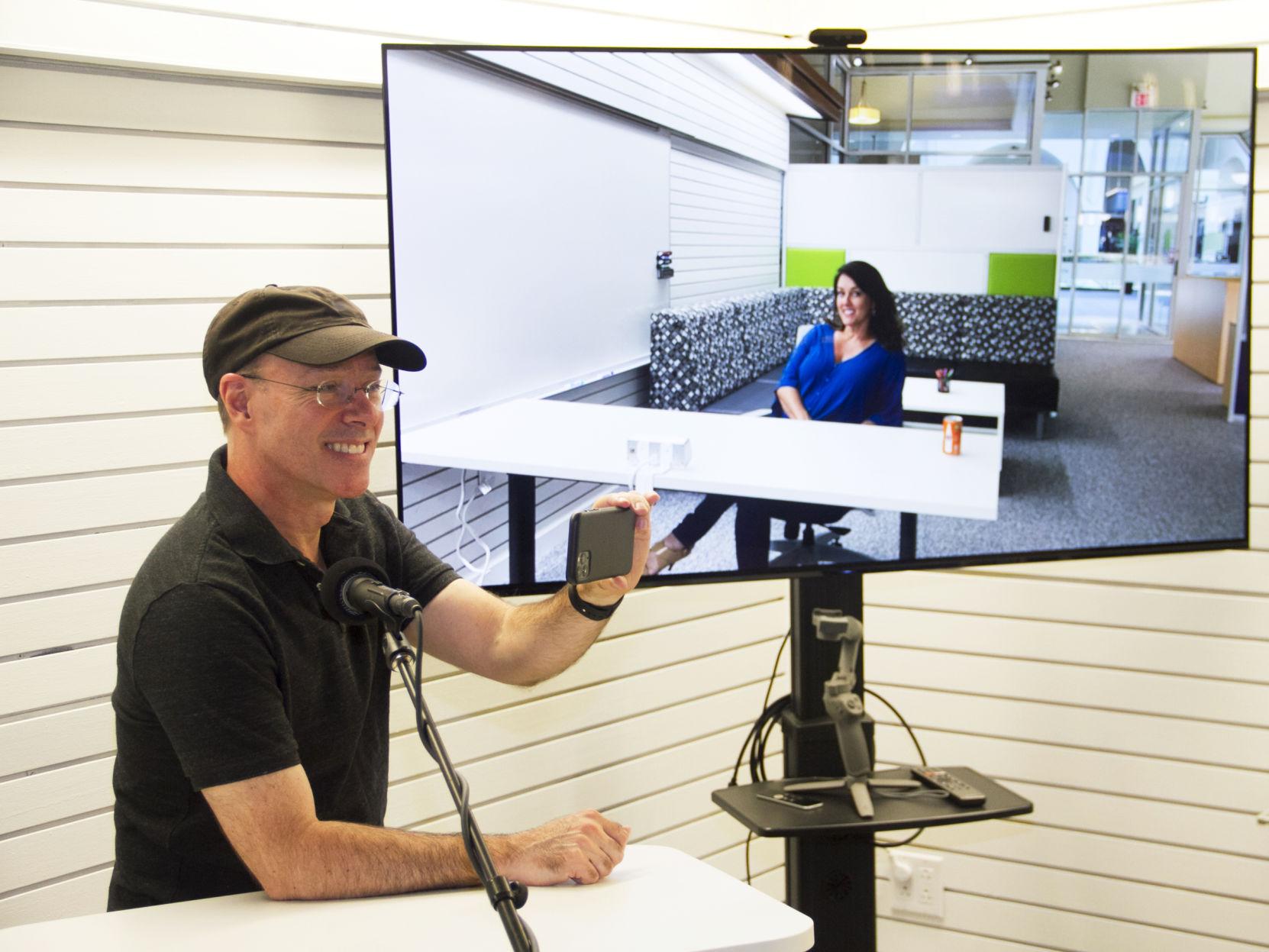 Tom Earley takes video of his wife, Heather. The video instantly is pictured on a screen, demonstrating a technologically advanced system for educational purposes.