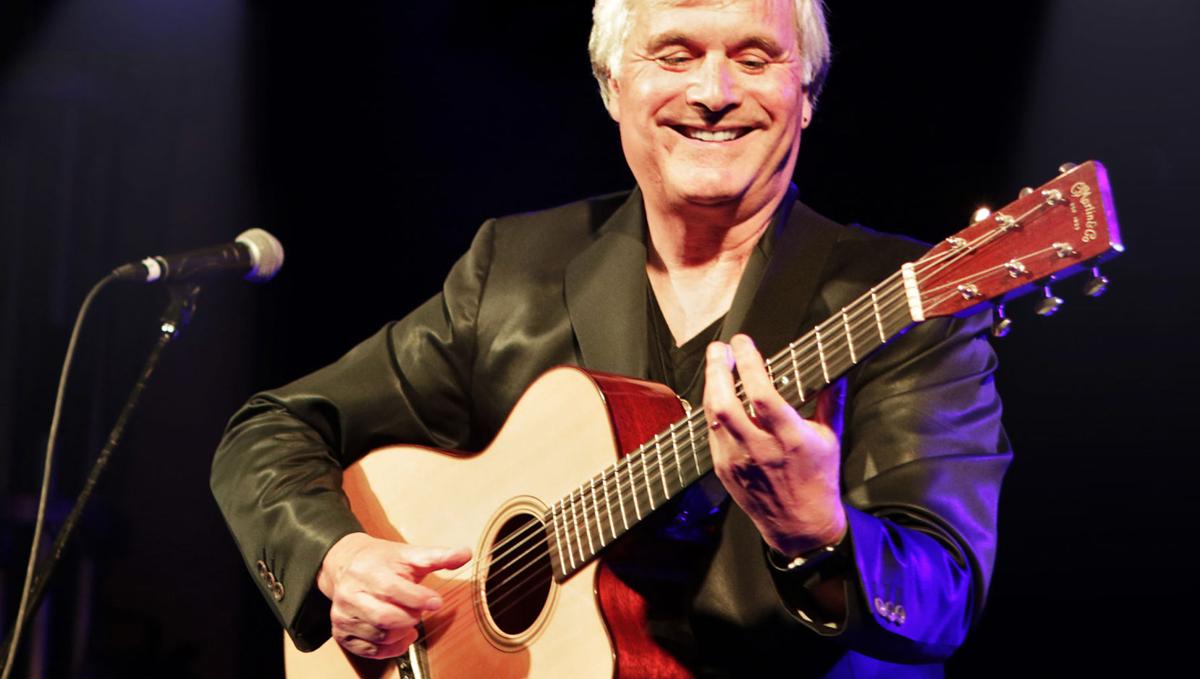 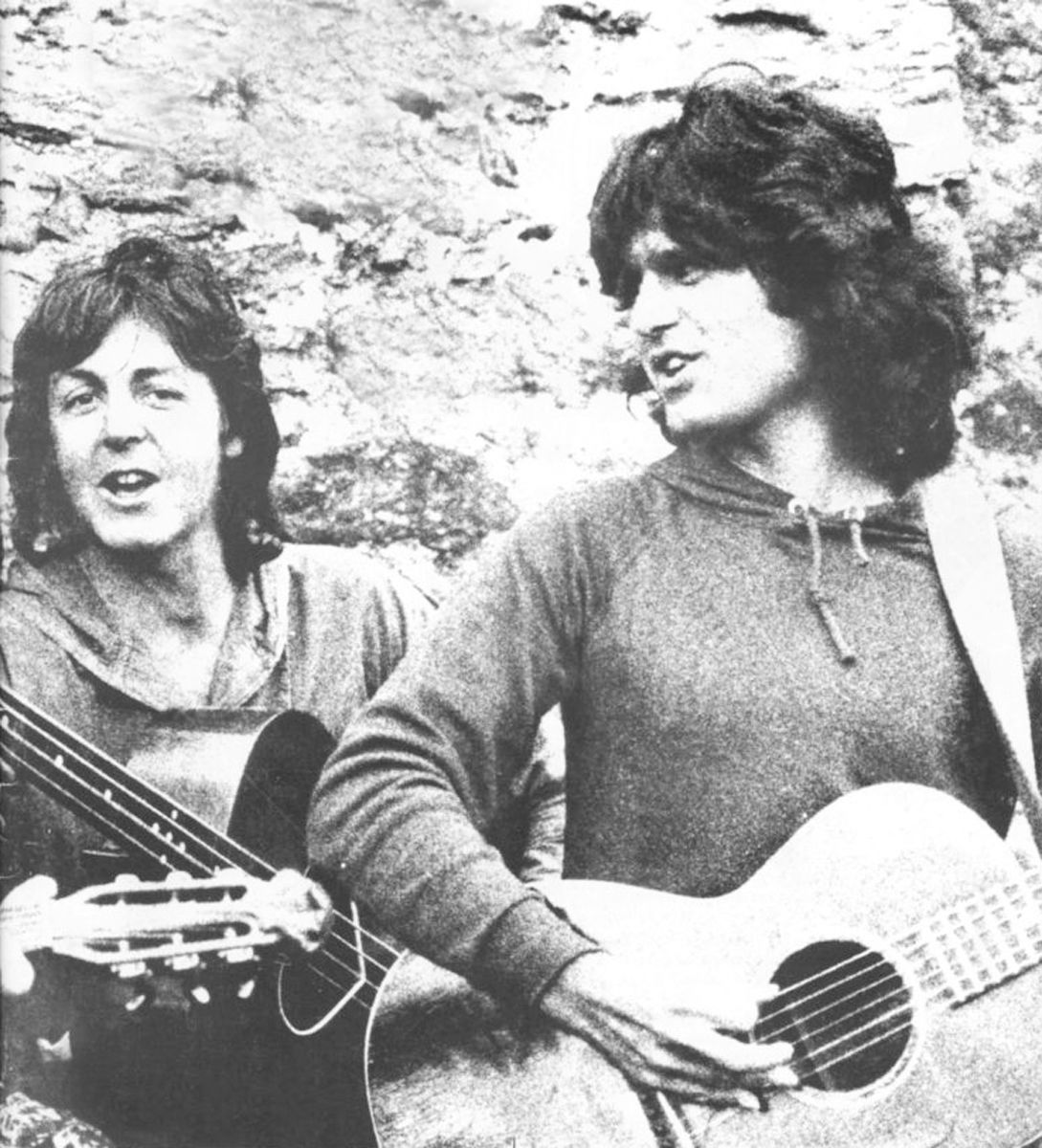 A member of Wings from 1978 to 1981, Laurence Juber has plenty of pictures of himself with Paul McCartney. This image is on the cover of Juber’s photographic memoir, “Guitar With Wings.” 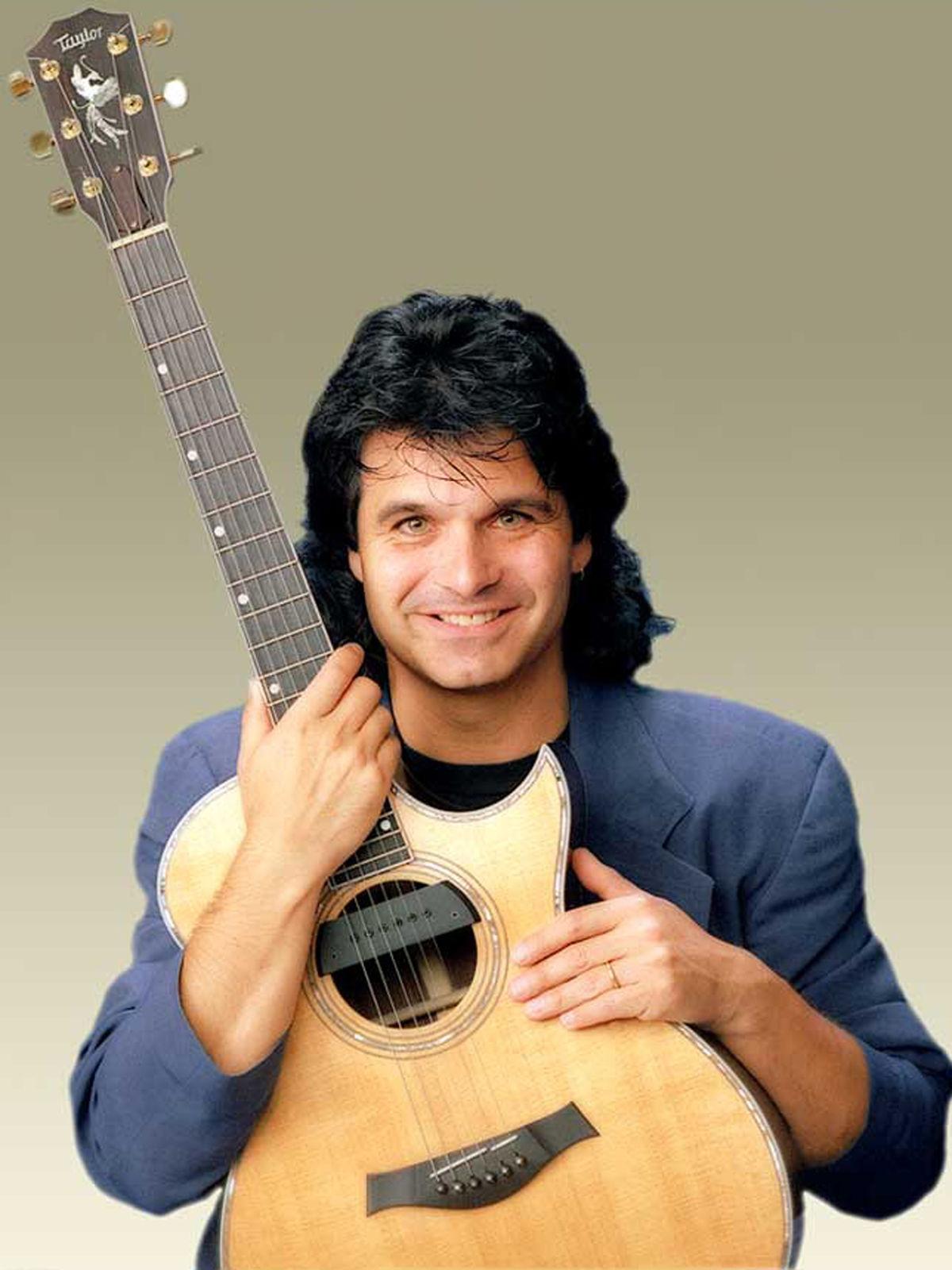 In 1984, Laurence Juber played this Taylor guitar on Al Stewart’s ”Train to Munich.”

Three of guitarist Laurence Juber’s albums cover songs by the Beatles, as you would expect from a musician who once was in a band with Paul McCartney.

Tunes by the Fab Four and other British Invasion-era acts are in Juber’s concert repertoire these days, but he also tends to play a wide variety of other material, from his originals to selections straight from the Great American Songbook.

“The thing that got me into Wings in the first place was the fact that I was versatile,” Juber said about his 1978-81 tenure with the McCartney-led group. “That, and I fit the suit,” he joked.

His versatility will be on display when he brings his signature-model Martin guitar to Mt. Lebanon for a performance from 7 to 9 p.m. March 24 at Temple Emanuel of South Hills, 1250 Bower Hill Road. The free concert, in honor of Rabbi Mark Mahler’s upcoming retirement after 38 years with the Temple, is sponsored by the synagogue’s Diskin Music Fund.

“Even though I don’t sing, the guitar does the singing for me,” Juber said. “I play what we call finger-style guitar. It’s completely self-contained. I’m playing melody. I’m playing bass and rhythm, all at the same time.”

He had a special request for his Temple Emanuel setlist.

“They had asked me if I could give some attention to Jewish composers. Then I looked at my repertoire and realized that a big chunk of it already was by Jewish composers,” he said. “You start looking at the history of American songwriting, and that’s how it is.”

Christmas songs, too, he pointed out, including the most successful of all: Gene Autry’s “Rudolph the Red-Nosed Reindeer,” the second best-selling record of all time until the 1980s, was by Jewish songwriter Johnny Marks.

Juber’s guitar graces many a collection, with 26 of his own albums released to go with playing on releases by artists varying from fellow Wings member Denny Laine to Curved Air singer Sonja Kristina to the Monkees to, most recently, “Unleash the Love” by Mike Love of the Beach Boys, released in November.

“I also played on the first Alan Parsons record,” Juber said about the 1976 release “Tales of Mystery Imagination.” But I didn’t know it until I read it in a magazine, like, 25 years later. Nobody told me what the session was for.”

He joined Wings as lead guitarist prior to the recording of “Back to the Egg,” released in 1979 as what turned out to be the final non-solo McCartney album. “Rockestra Theme,” the first track on the album’s second side, won the first Grammy Award for Best Rock Instrumental Performance.

“My particular incarnation of Wings, which was that last period, was somewhat different than the earlier periods,” Juber recalled. “It was really more of a rock ’n’ roll band.”

The first release under his name was the 1982 EP “Standard Time,” featuring the first song he ever wrote for finger-style guitar, “Maisie.” Recorded during the “Back to the Egg” sessions, McCartney, Laine and Wings drummer Steve Holley also play on the track.

Juber re-released “Standard Time” digitally on his own label in February, on the heels of his “LJ Can’t Stop Playing the Beatles,” the third album in that series, last March. The first one, “LJ Plays The Beatles” (2000), was voted one of Acoustic Guitar Magazine’s top 10 albums of that style of music.

His rendition of “Pink Panther Theme” was the lead track on “Henry Mancini: Pink Guitar,” winner of the 2005 Grammy for Best Pop Instrumental Album.

Among Juber’s recent projects is performing music for the “Roseanne” ABC-TV reboot. He also worked on the original, along with hundred of other series and films as a session guitarist in Los Angeles.

“I’m versatile,” he reiterated, “and I think that’s part of what keeps the audience engaged at the concerts. It has a pretty dynamic range to it, and people always seem to enjoy themselves.”