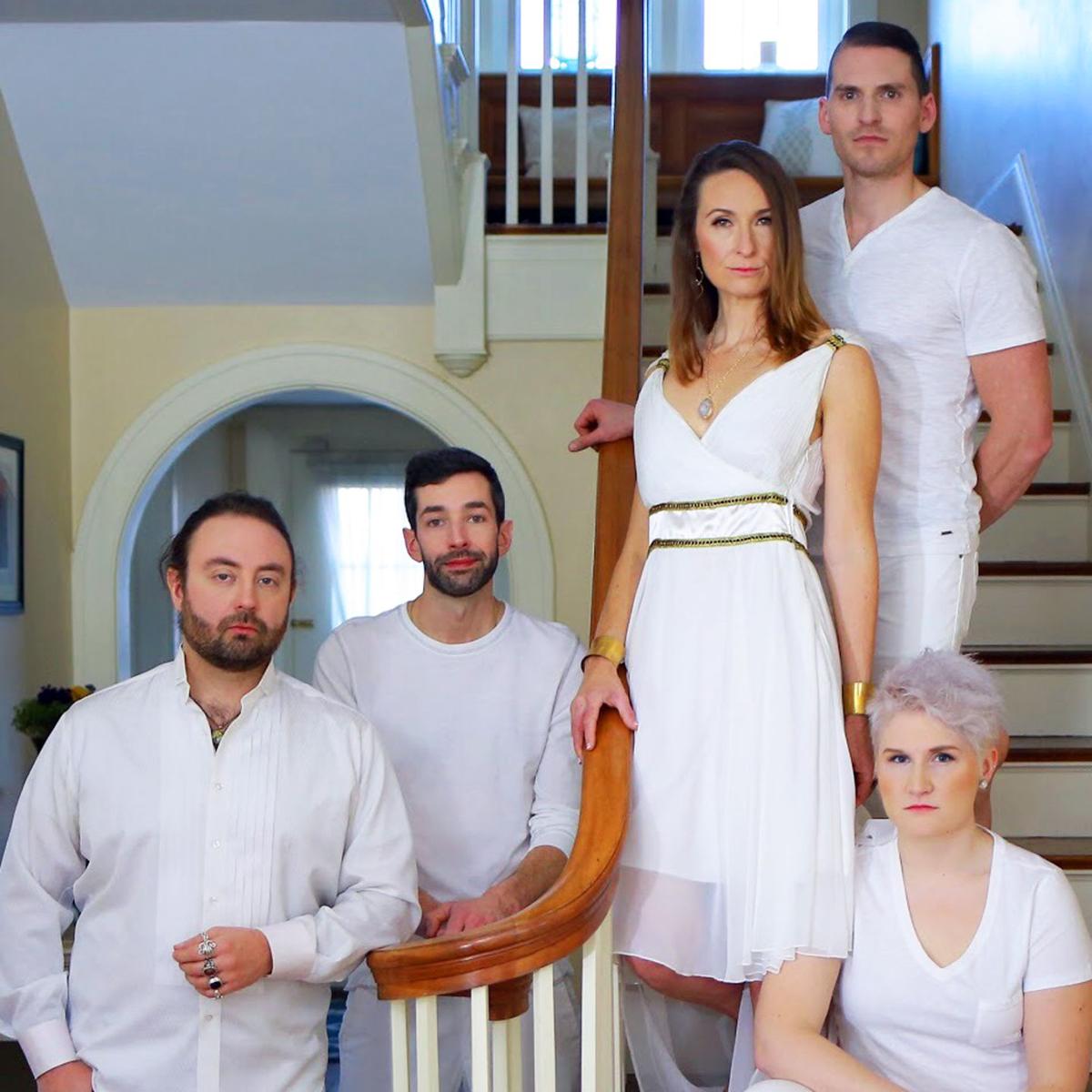 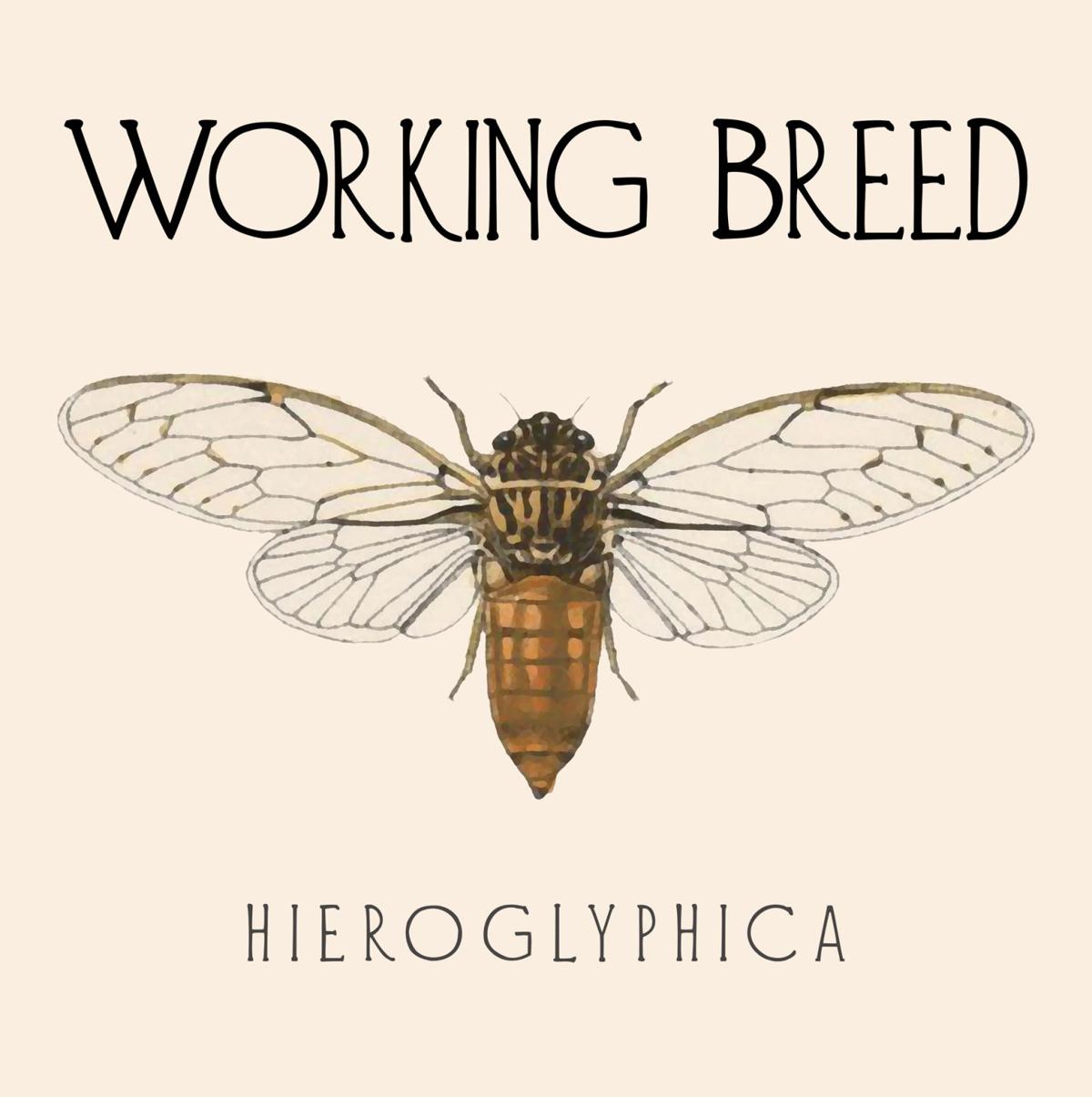 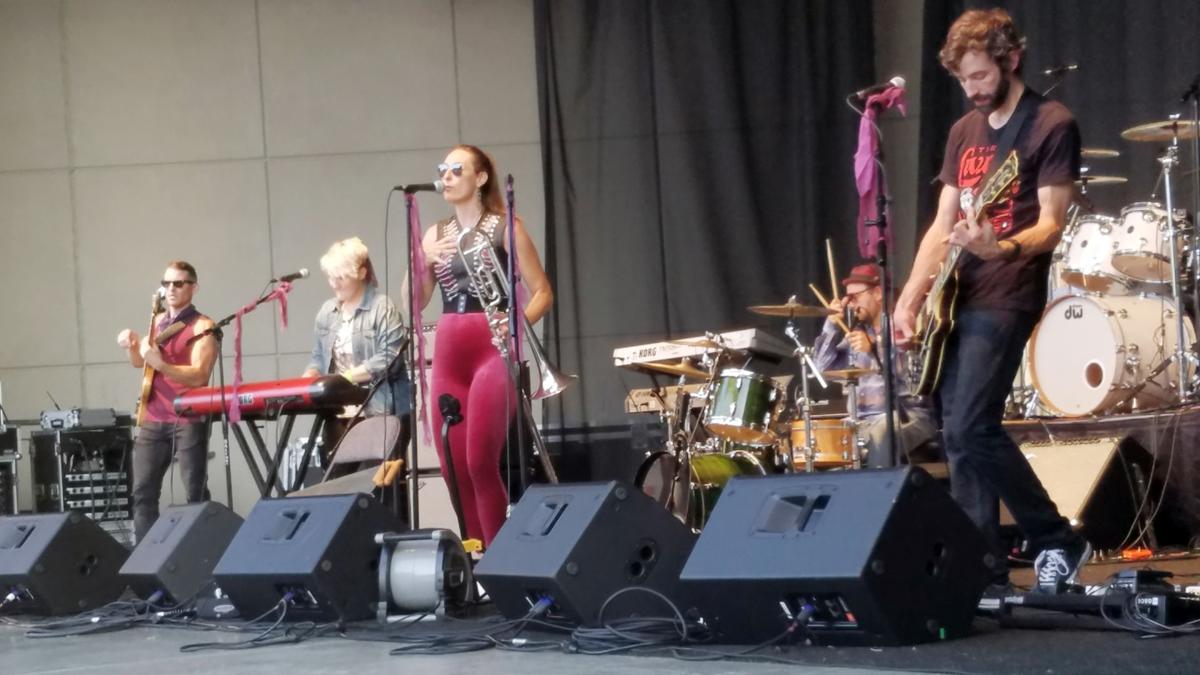 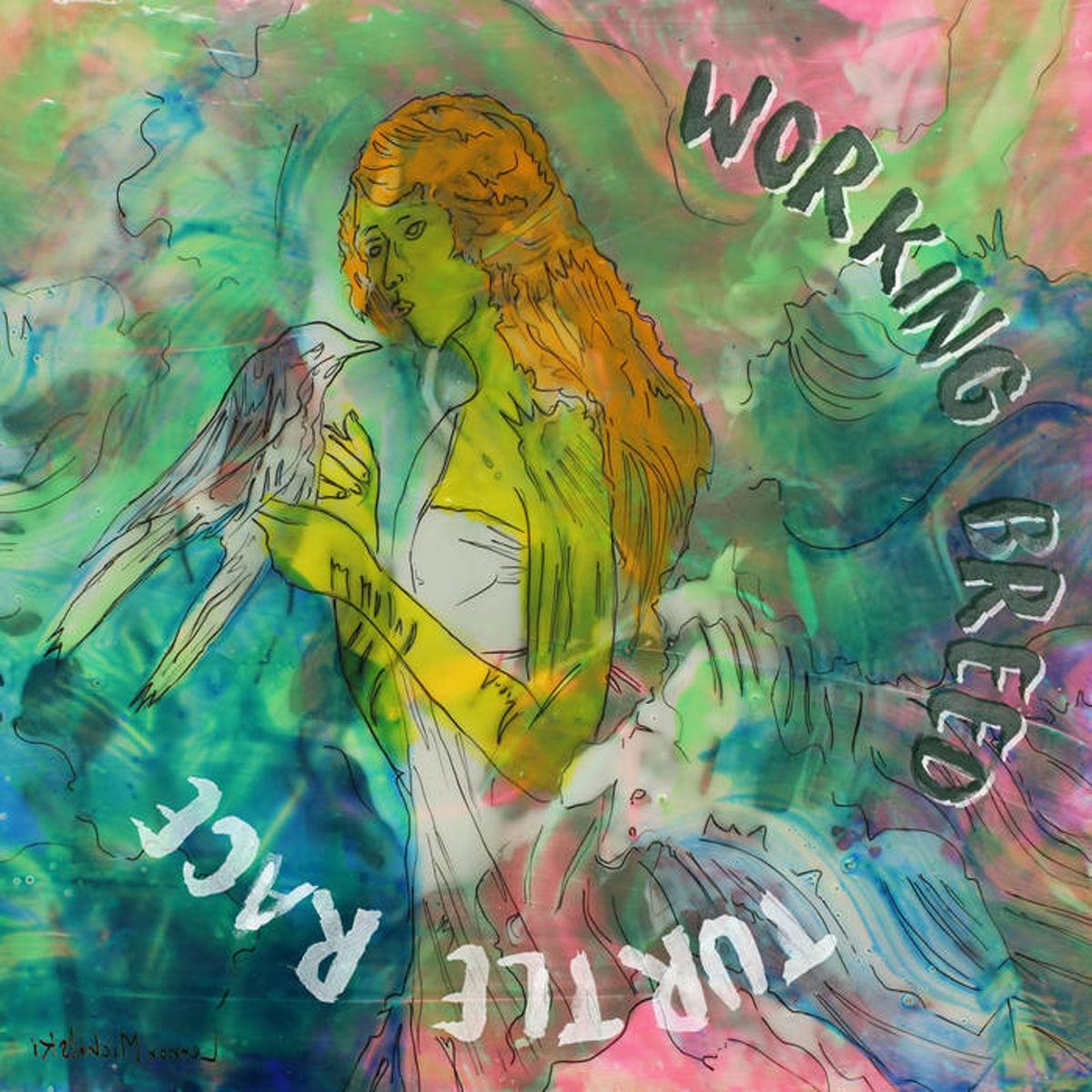 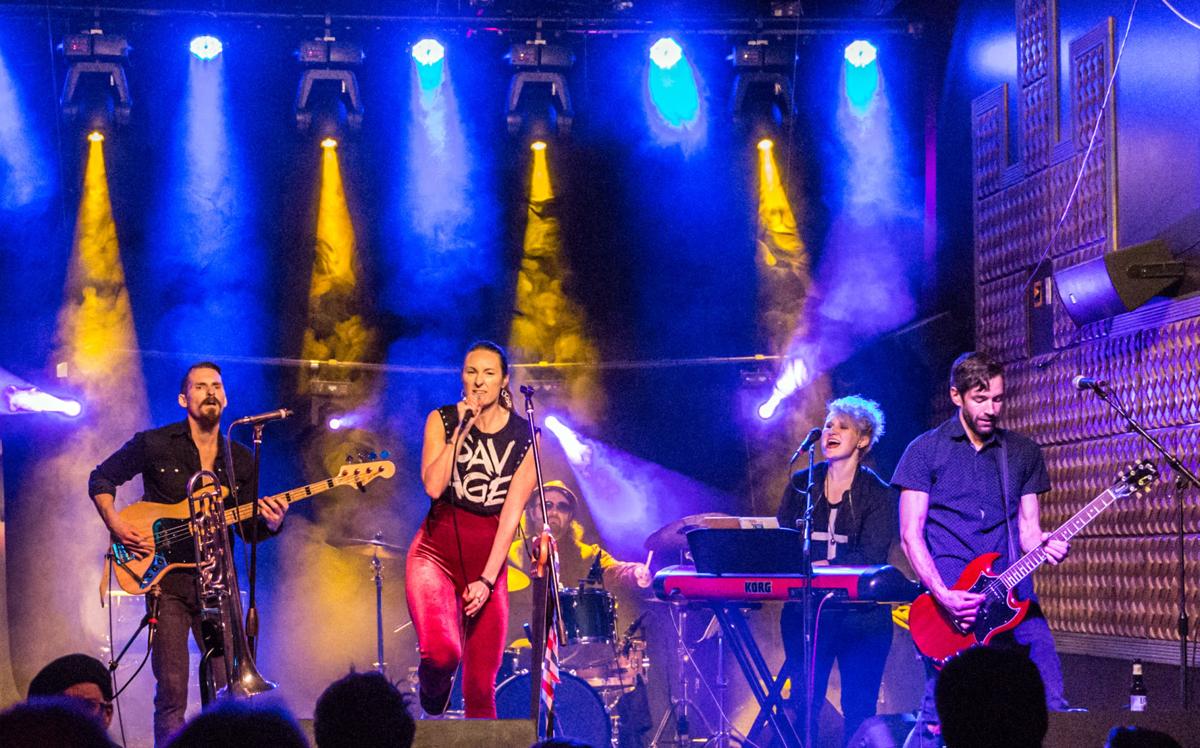 The members of Working Breed enjoy that the band’s name reflects the history and sensibilities of their Pittsburgh home.

But if you expect their music to be workmanlike, think again.

“I like surprises,” the band’s lead vocalist said. “I like to give the audience an experience that they haven’t had before. Maybe.”

She’s Erika June Christina Laing, as listed in the credits for Working Breed’s debut album, “Hieroglyphica.” And given her penchant for the unconventional, the Brookline resident plays a variety of instruments including musical saw and “Mimosa Pudica Plant Sonification & Speech Synthesis.”

“We were all done with everything on the album,” she said about the three-and-a-half year process leading up to its release. “But at the last second, I was like, ‘Guys, I have an idea.’”

She had written a song called “Sensitive Plant” – that’s Mimosa pudica, also known as shameplant, which folds inward when touched – and decided she wanted to record an intro for the album version involving said species.

Now, keep in mind that in her professional life, Laing is a project scientist in Carnegie Mellon University’s Machine Learning Department, plus she’s a clinical associate at the UMPC Brain Mapping Center.

“I got three,” she said about her Mimosa pudica. “I brought them home, and I did my little electromagnetic readings on them, like I do for the brain.”

The resulting sounds made for great musical accompaniment.

“Then on top of that,” she added, “I made this little silly poem that is synthesized speech, because supposedly what the plant feels is really hard to understand.”

OK, now that you have a small taste of what “Hieroglyphica” is about, you can check out Working Breed when it plays the album in its entirety during a release show scheduled for Aug. 24 at Thunderbird Café & Music Hall in Lawrenceville.

Along with Laing, members of the band are Mt. Lebanon High School graduates Michael Dugan on guitar and Jonah Petrelli on bass, plus keyboard player Chloe Wieczorek and drummer Jeremy Papay. All seven of the full-length songs on “Hieroglyphica” have the music credited to Working Breed as a whole.

“We don’t think of the band as being about any one particular person,” Laing said. “It’s an entity. It’s all of us. And because of that, we don’t want to ignore anybody as a player.”

So many of the tracks on the album stretch out with good, old-fashioned instrumental solos.

“There are a ton of talented players in the band, and it’s cool to showcase everybody’s abilities,” Dugan said.

And from his perspective as a guitarist, “A lot of the stuff in Working Breed stretches me and gets me out of my comfort zone, and really is not easy at times. It can prove to be really difficult. But it’s a labor of love, and you work on it and end up really appreciating it.”

Unfortunately, work on “Hieroglyphica” took place during a period in which three band members lost parents to cancer.

“I had already decided to go back to Florida to spend time with my dad,” Laing recalled, “and we decided that would be the perfect time to start a record, for some reason.

“For me, at least, it was great, because it kept me involved up here with these guys and they were super awesome about always being there for me,” she said. “I would come back every six weeks, and we’d work a little on the record and we’d have a show.”

A main reason for the project’s length was the band members’ desire to present a product of high-quality audio, and they credit co-producer Matt Vaughan, another Mt. Lebanon High School graduate, with a significant role in achieving the goal.

“He had a good ear to help us through this whole experience,” Laing said. “We mixed it so we were so happy, and then we sent that best thing ever that we could make to Frank Arkwright at Abbey Road.”

Yes, that’s right. “Hieroglyphica” was mastered by a sound engineer – he also has worked with the likes of Elton John, Joy Division and Blur – at the London recording studio made famous by the Beatles.

And the combined effort shows, from the crystal-clear keyboards that accentuate the start of “Mo Fo Ro Ro,” the album’s opening track, through the 12 seconds of the final note Laing sings in the closer, “Orange Fluff.”

Along the way is a unified concept, in the band’s words, “formed through jaunty songs of independence, histrionic ballads of heartache and reverent tributes to healing.”

“Turtle Race,” for which the band made an acclaimed video, addresses betrayal – “She can have your entire being” – and features an often-applicable assessment of love that’s unprintable here.

Similar language shows up in a different form on “Mo Fo Ro Ro,” with Petrelli’s lyrics using a certain expletive as a celebration of what always has been at the core of rock ’n’ roll.

Perhaps Working Breed’s outside-the-box approach best is represented with “My Chimera,” which features Laing’s trombone playing through a jazzy track that verges on torch song territory in the middle before the main theme re-emerges to include a scorching solo by Dugan.

Listeners to Pittsburgh FM stations WYEP and WDVE already have heard Working Breed through their playing of “My Chimera,” and now the full “Hieroglyphica” – named for a species of cicada that Laing also sampled for the album – will be available.

Working Breed takes the stage at 9:30 with guest musicians on horn and cello, plus a full production theme and set design.

“It’s an eclectic night for celebrating an eclectic album,” Laing said, to which Dugan added:

“From an eclectic band.”