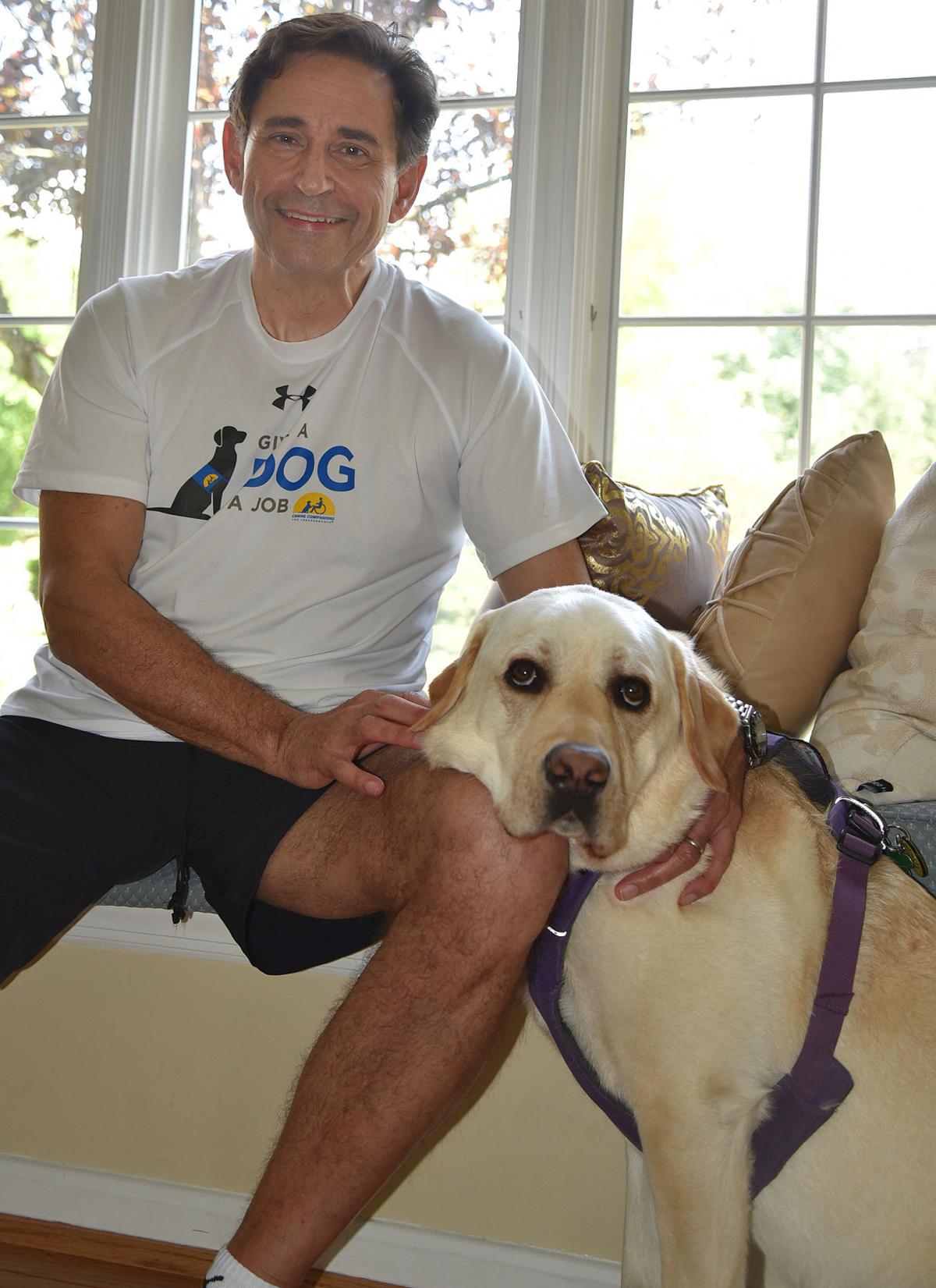 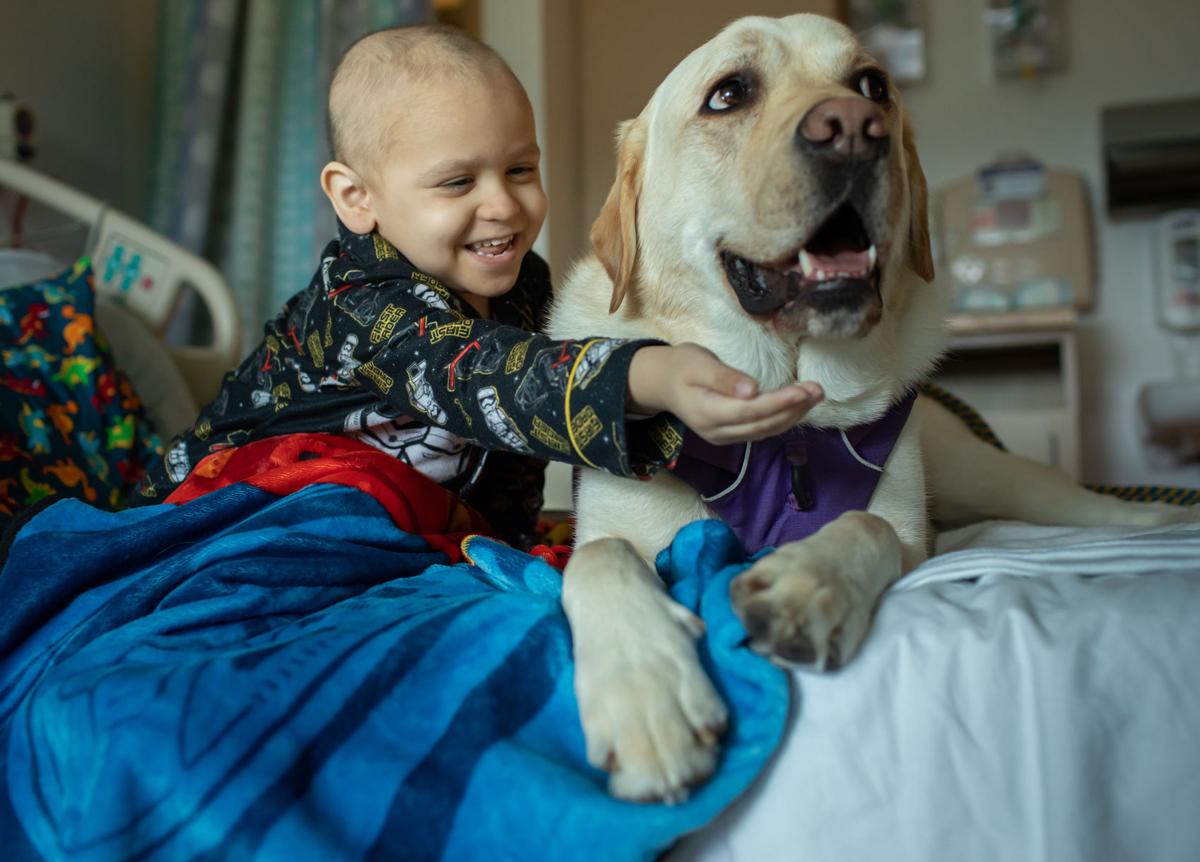 Tristan Kostley enjoys his visit with Eddie. Owned by Jim Caprio of Upper St. Clair, the Labrador retriever is part of the Children’s Hospital Pet Friends Program. He is one of the therapy dogs that makes in-room visits to the young hospital patients.

Jim Caprio’s life really has gone to the dogs. Since purchasing Eddie from Canine Companions for Independence, the Upper St. Clair resident spends much of his time tethered to the Labrador retriever. In addition to helping his master recover from surgery, Eddie makes the rounds visiting patients at Children’s Hospital of Pittsburgh and South Hills nursing homes.

“Magic moments,” Caprio called them. “Eddie is a connector of people. A catalyst to a relationship. If I just walk into a room, the patients may just look at me and it can be hard to relate, but if you have a dog, they bond right away.”

When Caprio lost his pet, Rocky, a lab that lived for 15 years, he bonded right away with Eddie. “It’s the best money I’ve ever spent,” he said. “Rocky was just a nice dog. A pet. Eddie’s more than a pet. Right now, he’s a working dog. He’s a busy dog, but he loves it.”

Eddie and Caprio are involved in the Children’s Hospital Pet Friends Program. Twice a week, they travel to Bloomfield and pay “in-room” visits, seeing approximately 12 to 15 children during a two-hour shift.

“It is a hugely successful and popular program and I am so blessed and happy to be a small part of it,” Caprio said. “I have never done anything as cool as this. Bringing joy to kids is kind of like a holy moment. Usually they and their parents have had a tough day and everybody who’s coming through the doors has bad news, but when we come through the door, it’s a whole new thing.”

When Eddie enters a room, he usually leaps onto the patient’s bed.

“When he’s in the hospital, he is all business. He loves to play. He’s a jumper – that’s what he does best – and he’s a great distraction, because while the kids are playing with the dog, the parents can talk to the doctors. It’s been a fabulous thing and it makes a big difference for the kids.”

There is a big difference between a therapy dog and a service dog. Though Eddie was being trained for the latter, he didn’t make the cut. According to Caprio, a therapy animal helps others, goes places and has a handler. A service dog does a specific job to help a person and requires a higher skill set.

“I don’t know why Eddie didn’t make it as a service dog, but he does other things well,” Caprio said. “He doesn’t bark. He heels perfectly. He’s not rattled by sounds or people. He loves to play ball. He’s one fantastic dog and in the end, he’s perfect for what he does. I am so lucky to have him.”

This winter, Caprio discovered just how fortunate he was to have Eddie by his side. During a trip to Florida, the New Kensington native hit his head on a palm tree while talking on his cellphone and walking on a trail. He fell and tore a tendon in his quadricep muscle. “Eddie stayed with me. Licking me all the time until help arrived,” said Caprio. “He’s a great dog.”

Once back in Pittsburgh, Caprio required surgery to repair the injury. Through his own personal rehab, Eddie has been there every step of the way. Every morning, he’d lay next to Caprio in the hospital bed set up on the first floor of his house. Eddie would also accompany Caprio with his exercise and walking.

“Just having him around lowers my blood pressure,” said Caprio, who had open-heart surgery 15 years ago. “When he’s around, I feel better.”

The Walk For Children's will be held June 1 at Flagstaff Hill at Schenley Park. Registration begins at 8 a.m.

After the opening ceremony at 9:30 a.m., a patient champion ceremony and parade will be held. The walk begins at 10 a.m.

The route measures 2.3 miles and starts and finishes at the same point.

There is also a half-mile loop available for those wishing a shorter stroll.

During his recuperation, Caprio brought Eddie to Children’s Hospital, where instead of making in-room visits, the pair worked the transplant floor, welcomed visitors and interacted with patients. Come June 1, however, Caprio plans to fully participate with Eddie in Walk Day, one of the hospital’s largest fundraisers. This year marks the first time the Pet Friends will enter a team, with all volunteers walking with their dogs.

“One way or another Eddie will walk,” said Caprio, whose right leg is still encased in a brace. “The Pet Friends program at Children’s is so important, not just to me but to the parents and children. They look forward to it. It breaks up the day. It’s a fantastic program and it’s humbling to visit these kids and when you walk into their room, the ones who have been there for months, and you see the photos of the dogs that visited them on their bulletin boards. It’s just an honor to be part of it, to see the quality of nurses and be around so many amazing people that do a fantastic job helping others.”

Eddie also helps the other end of the spectrum as Caprio ministers to seniors in nursing and retirement facilities throughout the South Hills, such as Paramount Senior Living of Peters Township, The Grand Residence in Upper St. Clair, Baptist Homes in Castle Shannon, Providence Point in Scott Township and Bethel Park Senior Living.

A Eucharistic Minister at St. Benedict the Abbot Church in McMurray, Caprio distributes Holy Communion to seniors during religious services. He also entertains them with music he plays on his guitar. After the praying and singing, Eddie works the crowd.

“It’s a new and different use of the therapy dog,” Caprio explained. “Very cool.”

While different than the hospital visits, the nursing home trips prove just as rewarding for Caprio.

“I love the old people. They are so dear, so gentle, so needy and in a lot of ways so happy,” he said. “The senior citizens are just as positive about the visits, but it’s so different. The older folks enjoy the attention because they are all alone. They like to see the dog because it breaks up the monotony. And, they want to talk. The kids just want to interact with the dog. There’s not a whole lot of conversation with them. They talk to the dog.”

With two or three other therapy dogs, Eddie also makes routine appearances at the Upper St. Clair Public Library. Once or twice a quarter, he attends the literary sessions for pre-schoolers and early elementary-school aged students. “Eddie lays down and the kids read to him,” Caprio said. Certified under Therapy Dogs International, Caprio added, “they want the dogs to be working.”

Though he turns 66 on May 29, Caprio, himself, continues to be employed. A vice president of sales and marketing for United Refractories, located in McMurray, he hopes to work until he turns 70.

“I love my work, the people I work for and the projects I work on,” he said. “I also think the key to good health is staying active.”

Eddie certainly helps in that regard as he requires the utmost attention regarding his own fitness. Eddie adheres to a special diet and gets plenty of exercise – at least two miles of walking a day – to maintain a healthy weight, between 72 and 75 pounds.

“We watch what we feed him,” Caprio said. “Eddie’s never ever had people food, because you don’t want him to beg. And, he needs exercise to stay fit because he has to do a lot of things, like jumping in and out of a car.”

As long as he, himself, stays healthy, Caprio says he would like to devote his full attention to his therapy dog activities once he does actually decide to retire. His endeavors have brought him peace and joy.

“What Eddie does is just cool. He provides a distraction from whatever people are going through, an escape from pain and loneliness. If, with Eddie, we can help create magic moments for others and help them find a way to be positive, then that’s a slam dunk. Nothing has made me happier than doing this.”