You are the owner of this article.
Edit Article Add New Article
Welcome, Guest
News
Sports
Life & Culture
Events Calendar
Lottery Results
Fish Fry Map
Weather
Classifieds
e-Edition
South Hills Living
Get Our Newsletter
Get the Almanac
Advertise With Us
Submit Content to The Almanac
Contact Us
About Us
1 of 14 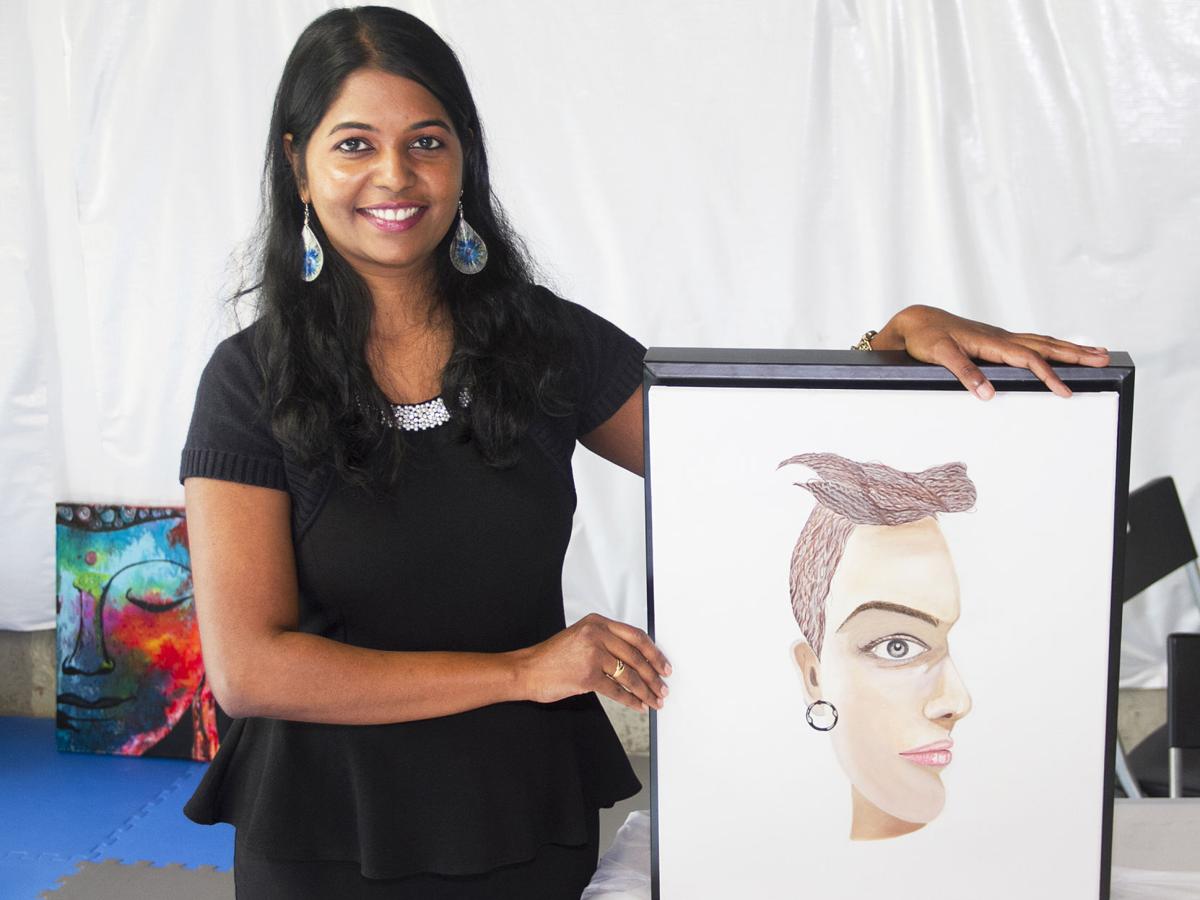 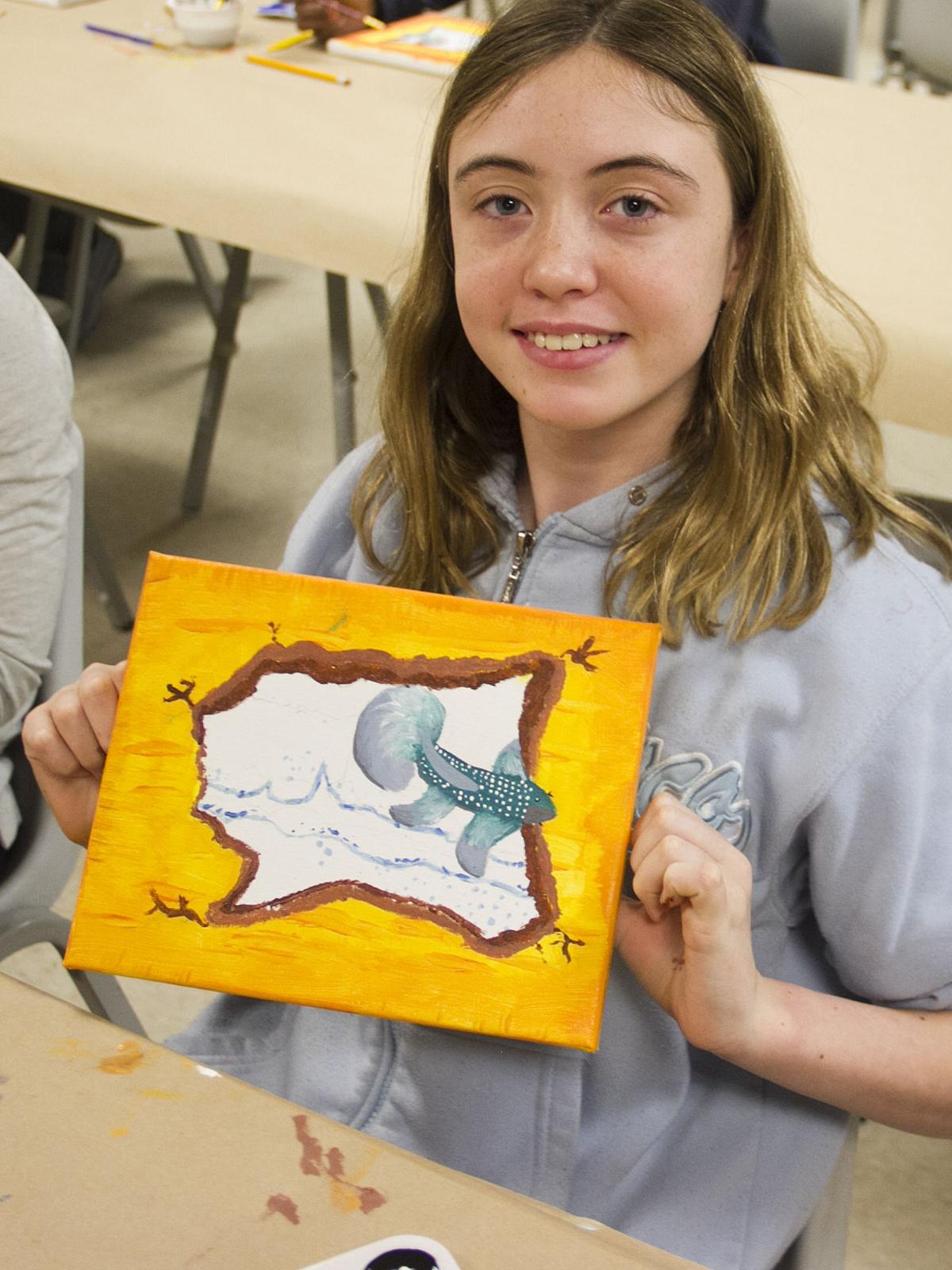 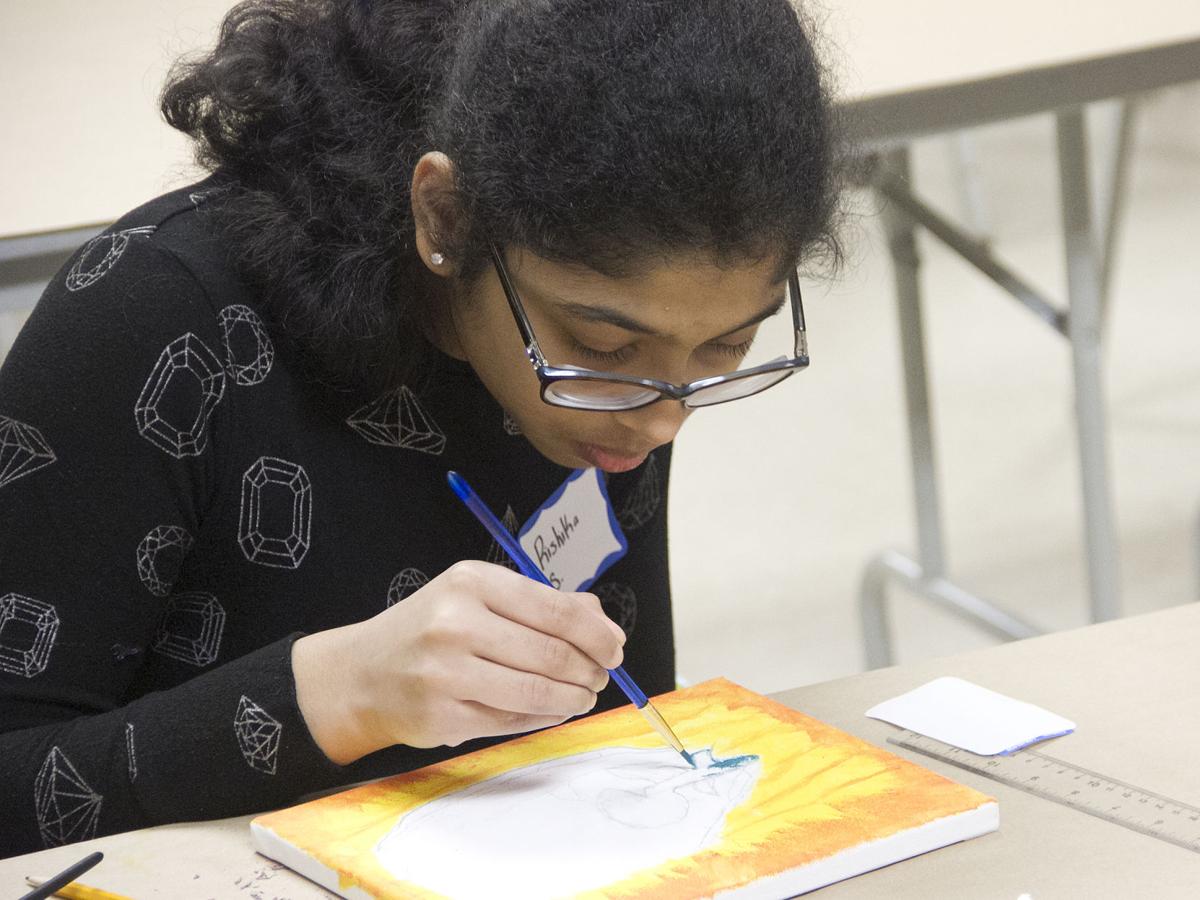 Rishika Somireddy works on her painting. 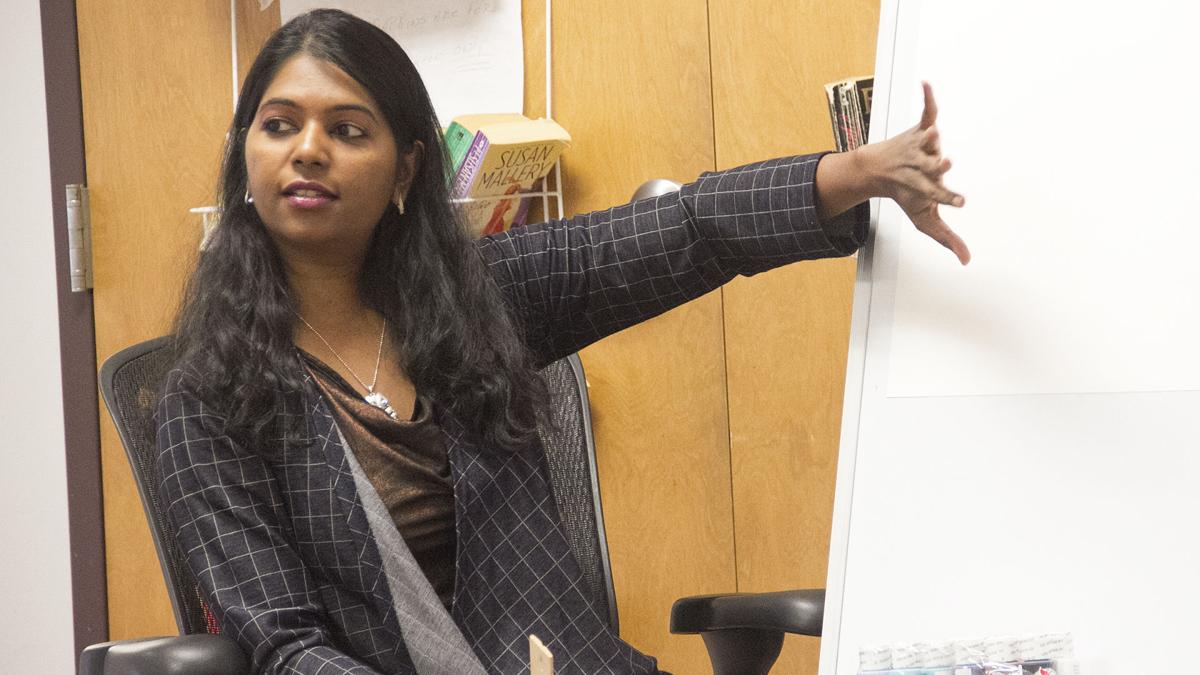 At the start of her art class, Selva Priya describes what eventually will be portrayed. 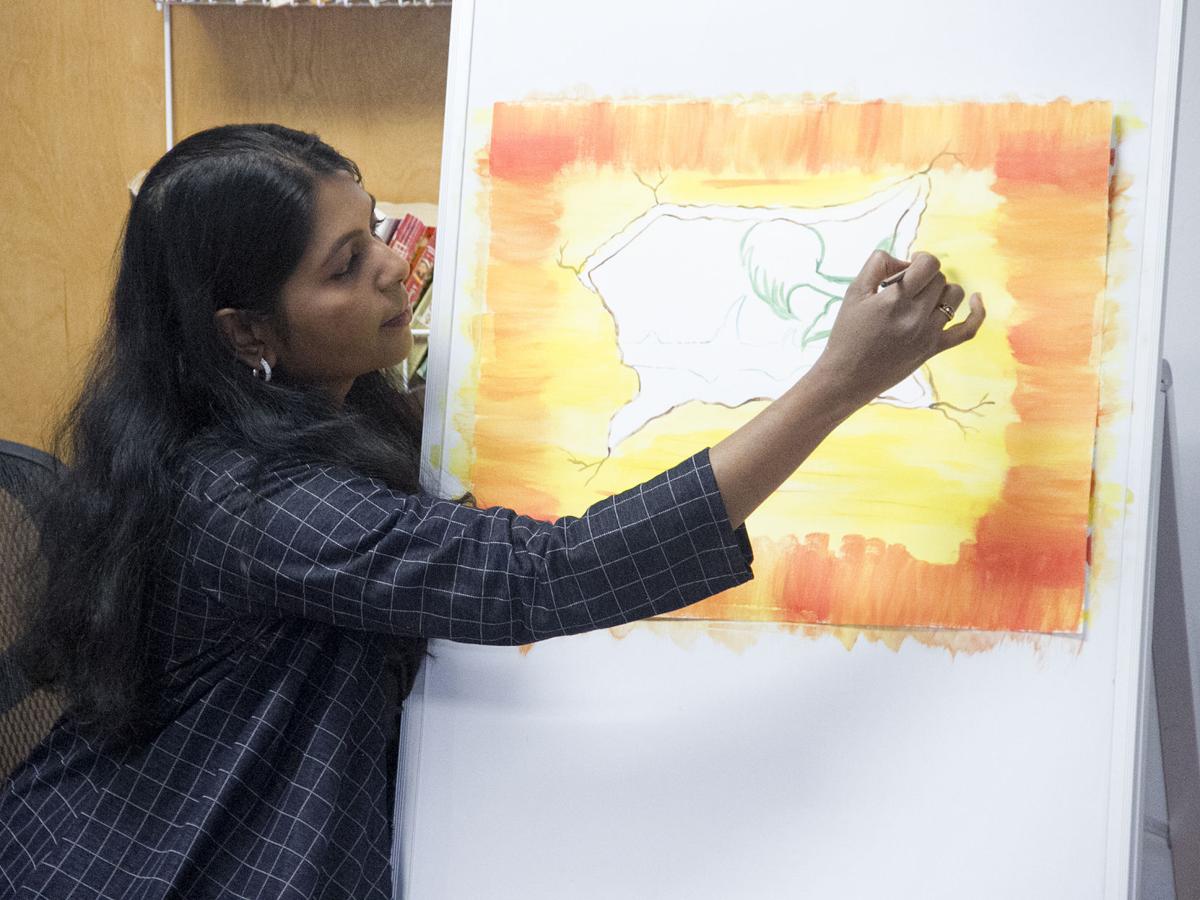 Selva Priya demonstrates with her own painting as she provides step-by-step instruction. 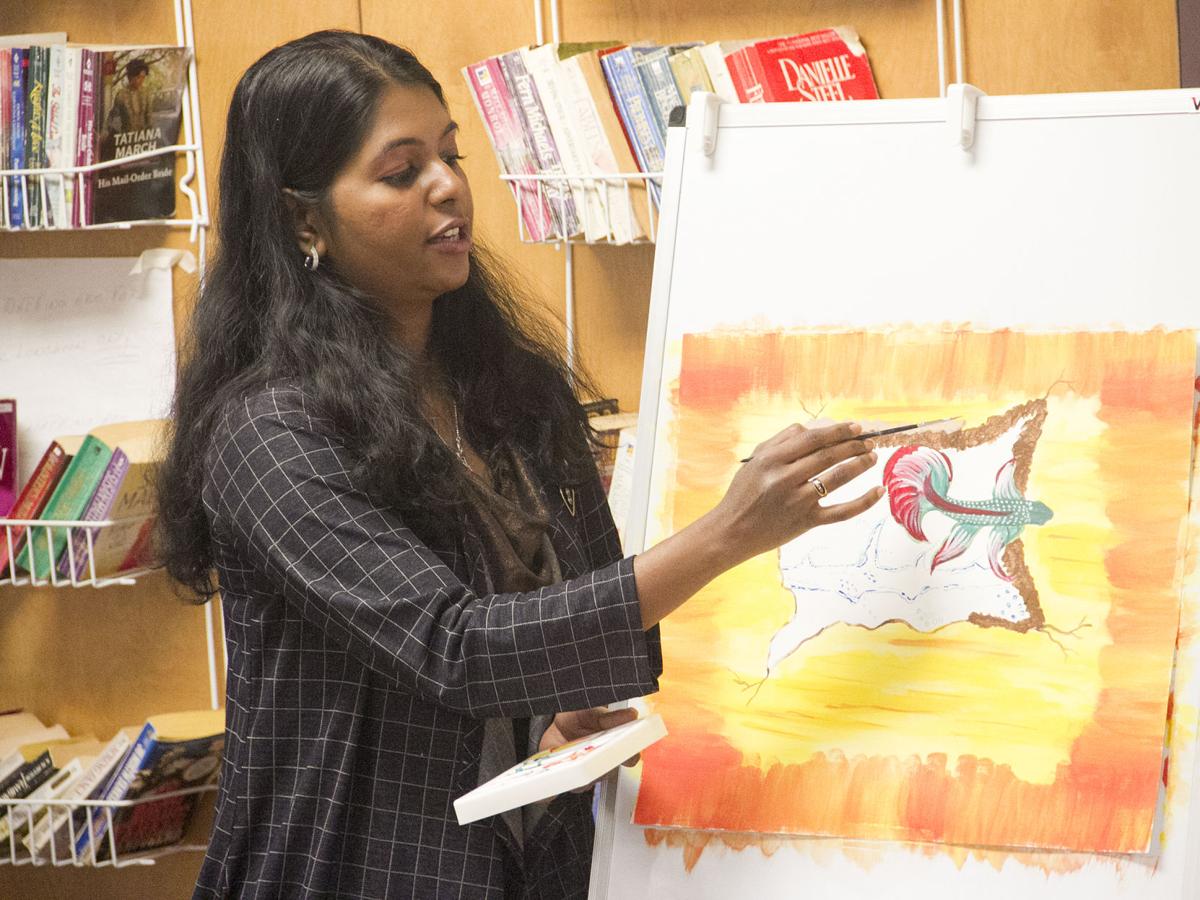 Selva Priya puts finishing touches on her painting during the class at South Fayette Township Library. 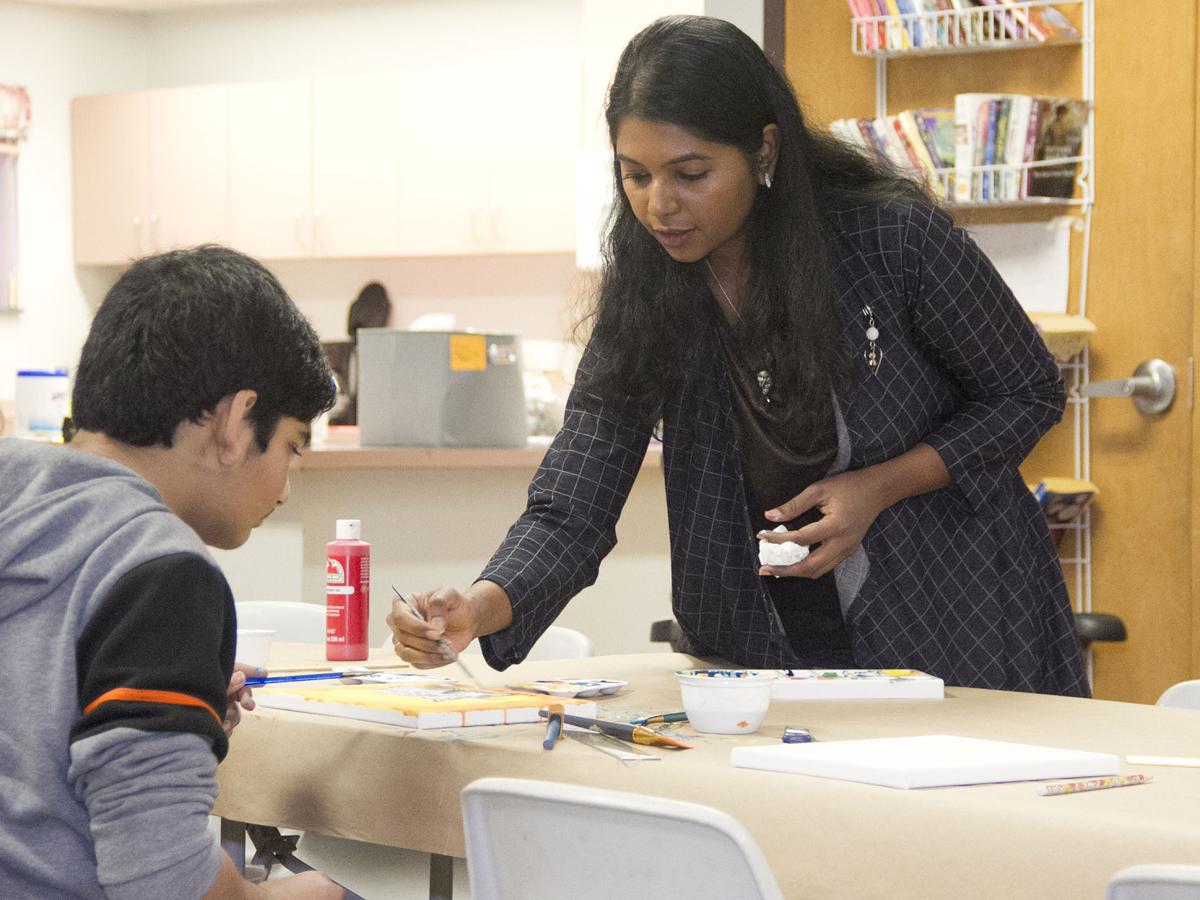 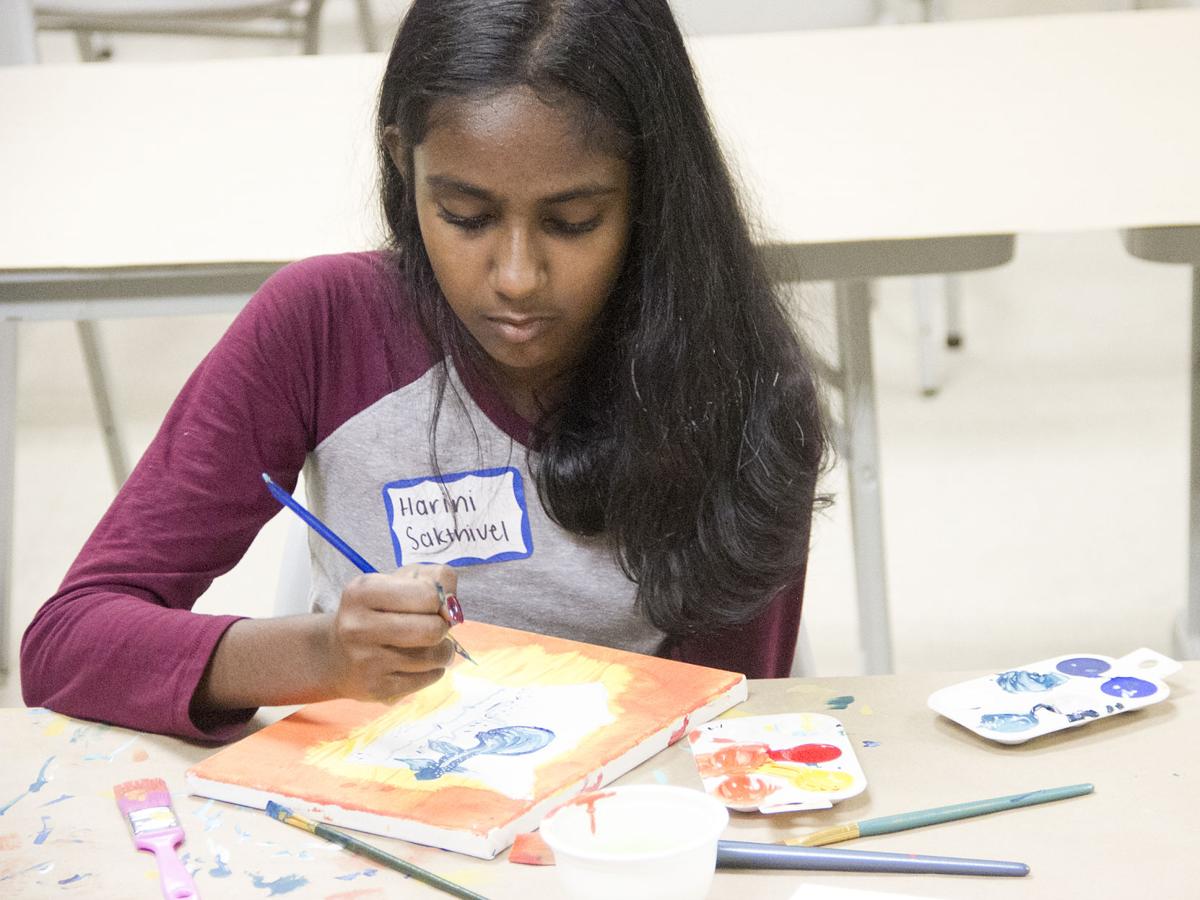 Harini Sakthivel works on her project. 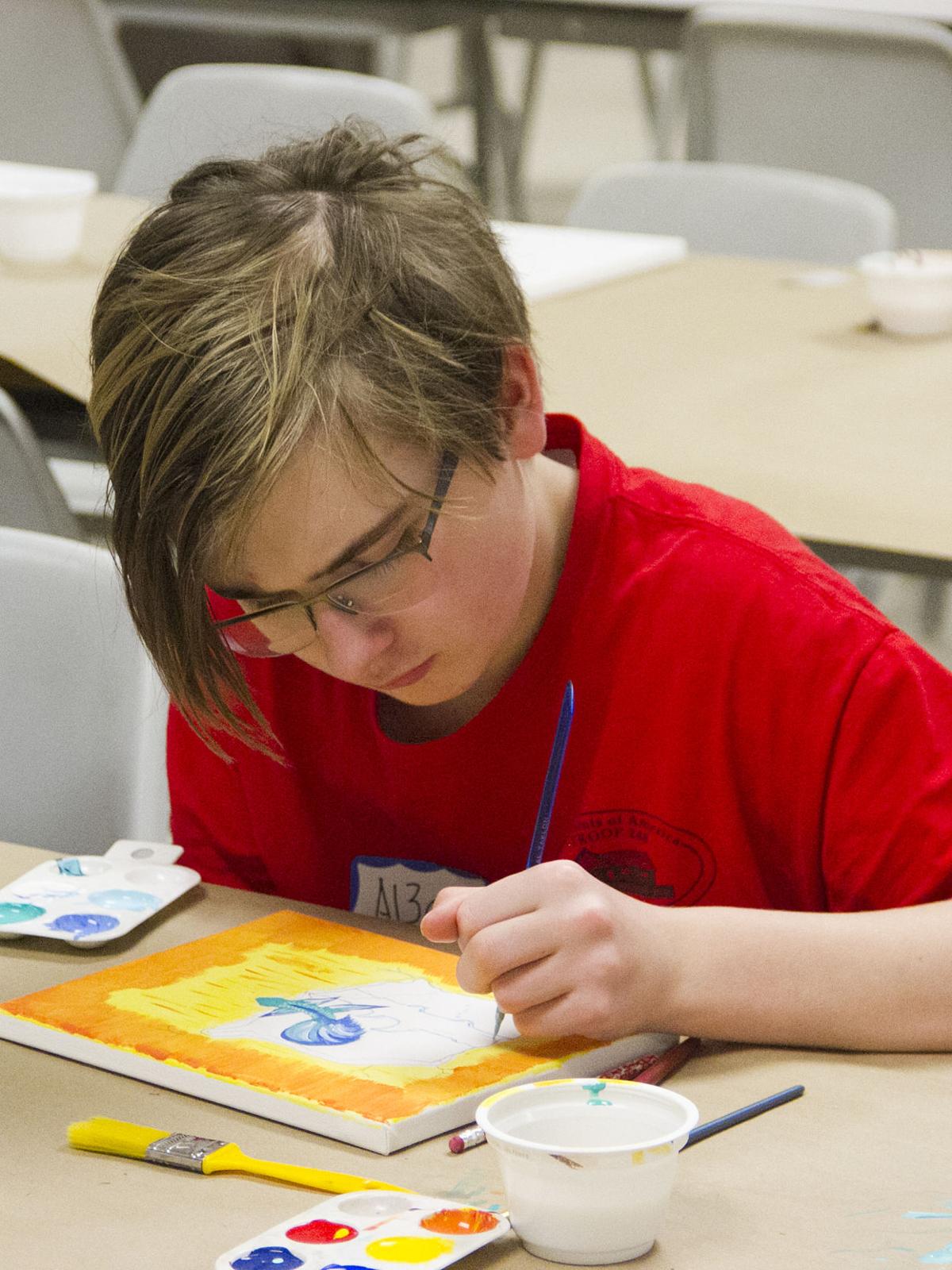 Alec Richards works on his project. 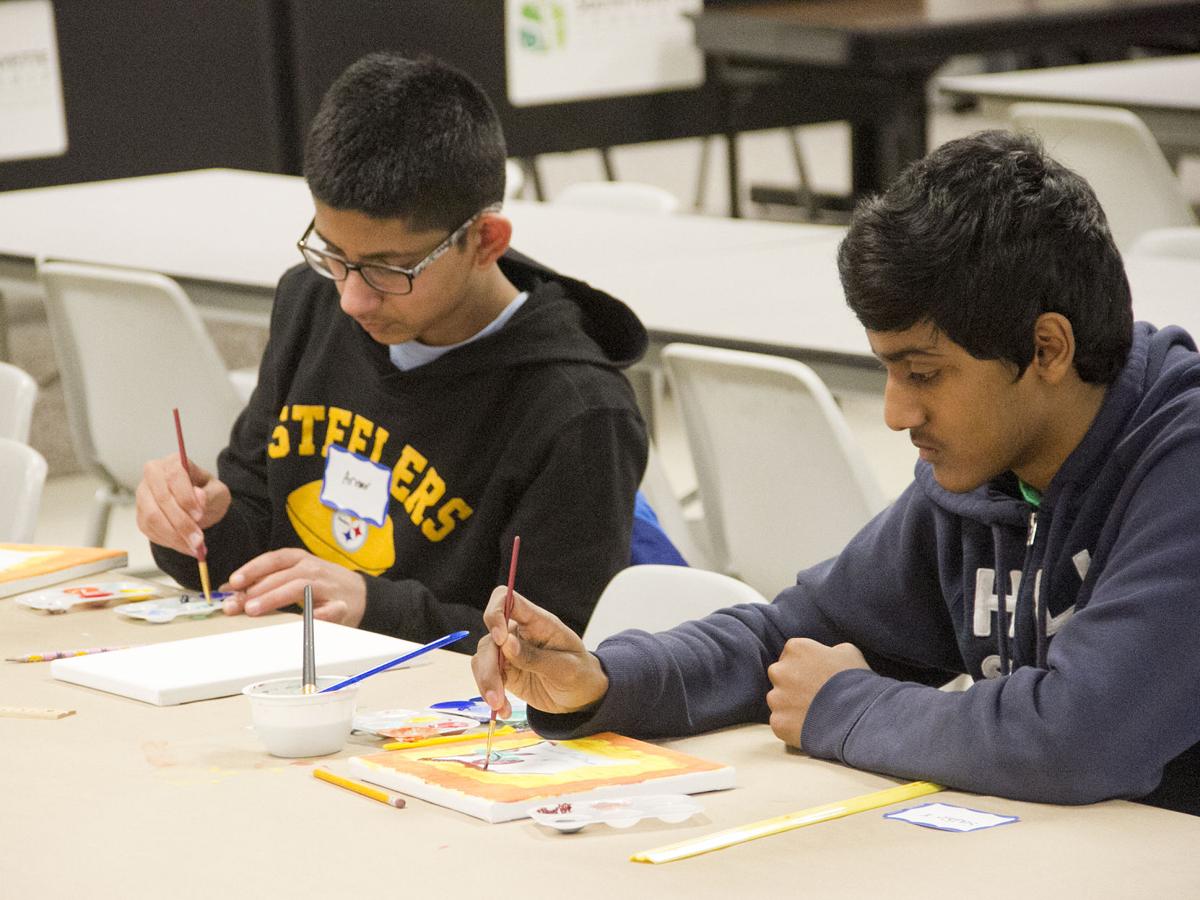 Arnav Kumar and Sudhir Vemula work on their projects. 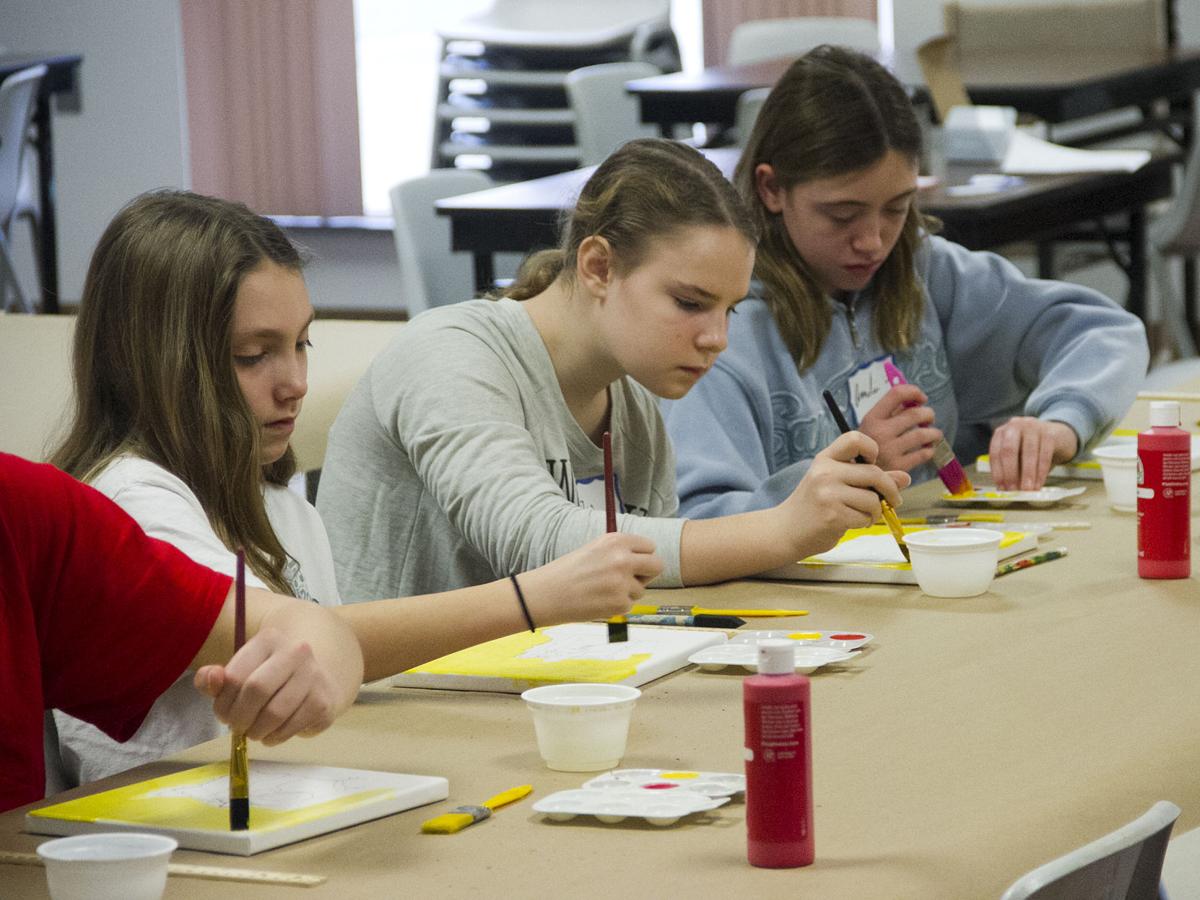 From left are Ava Lauterbach, Zoe Unruh and Amelia Keller. 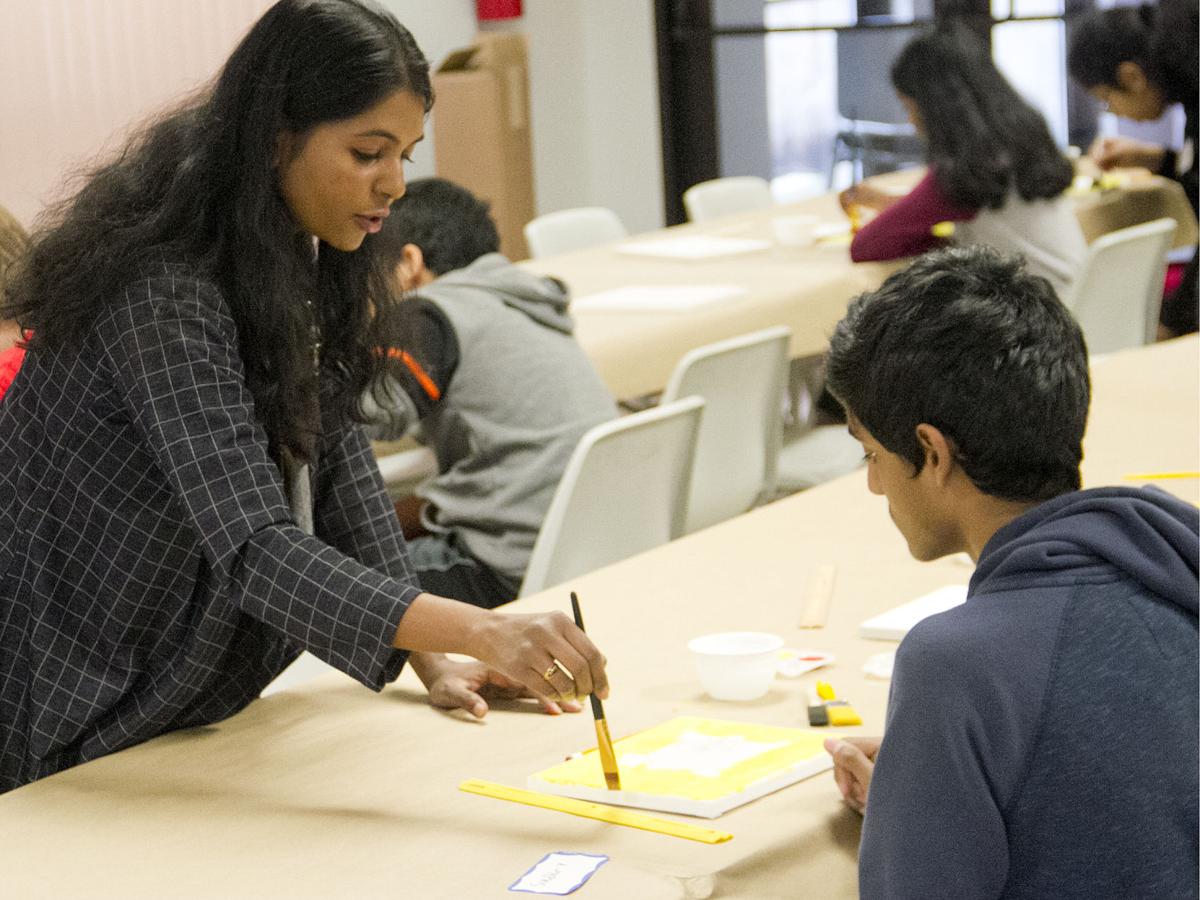 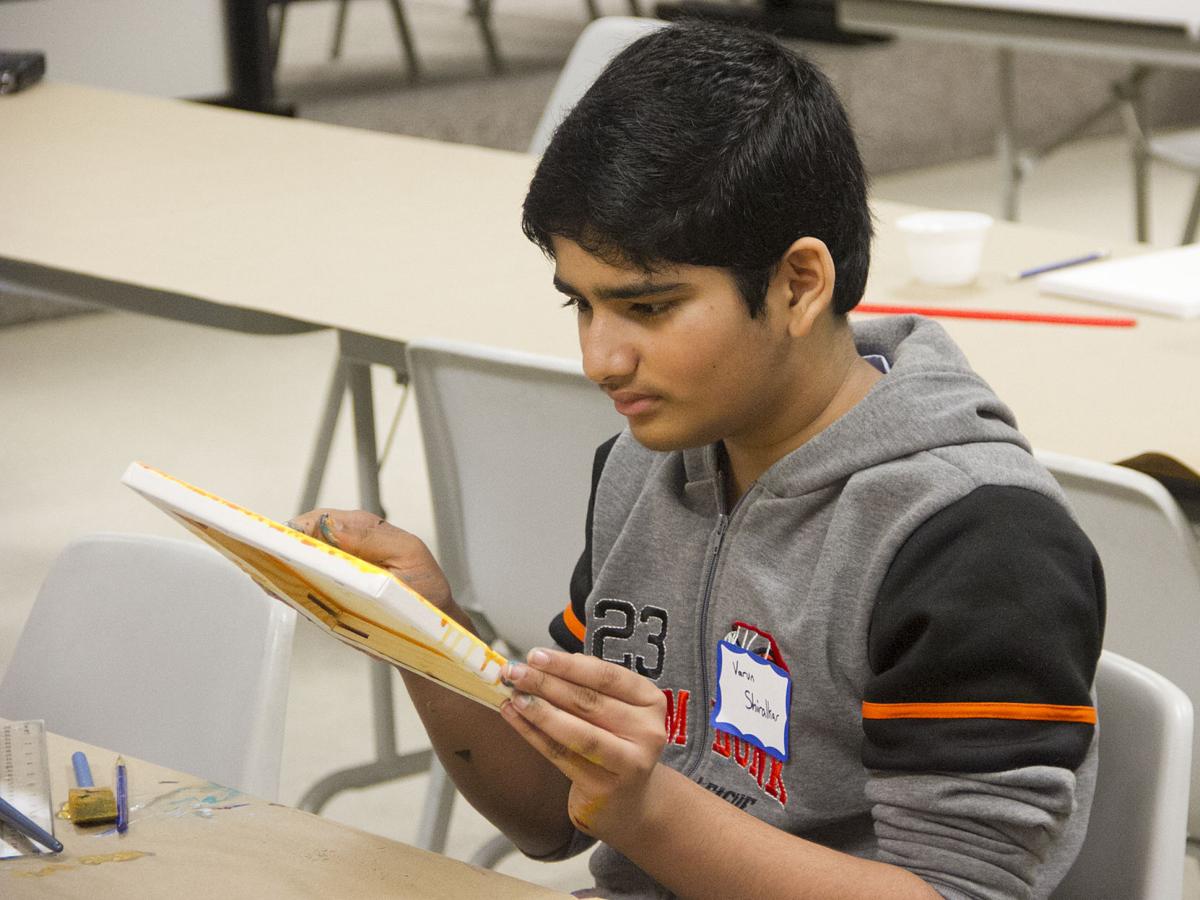 Varun Shiralkar takes a close look at his painting to see the 3-D effect. 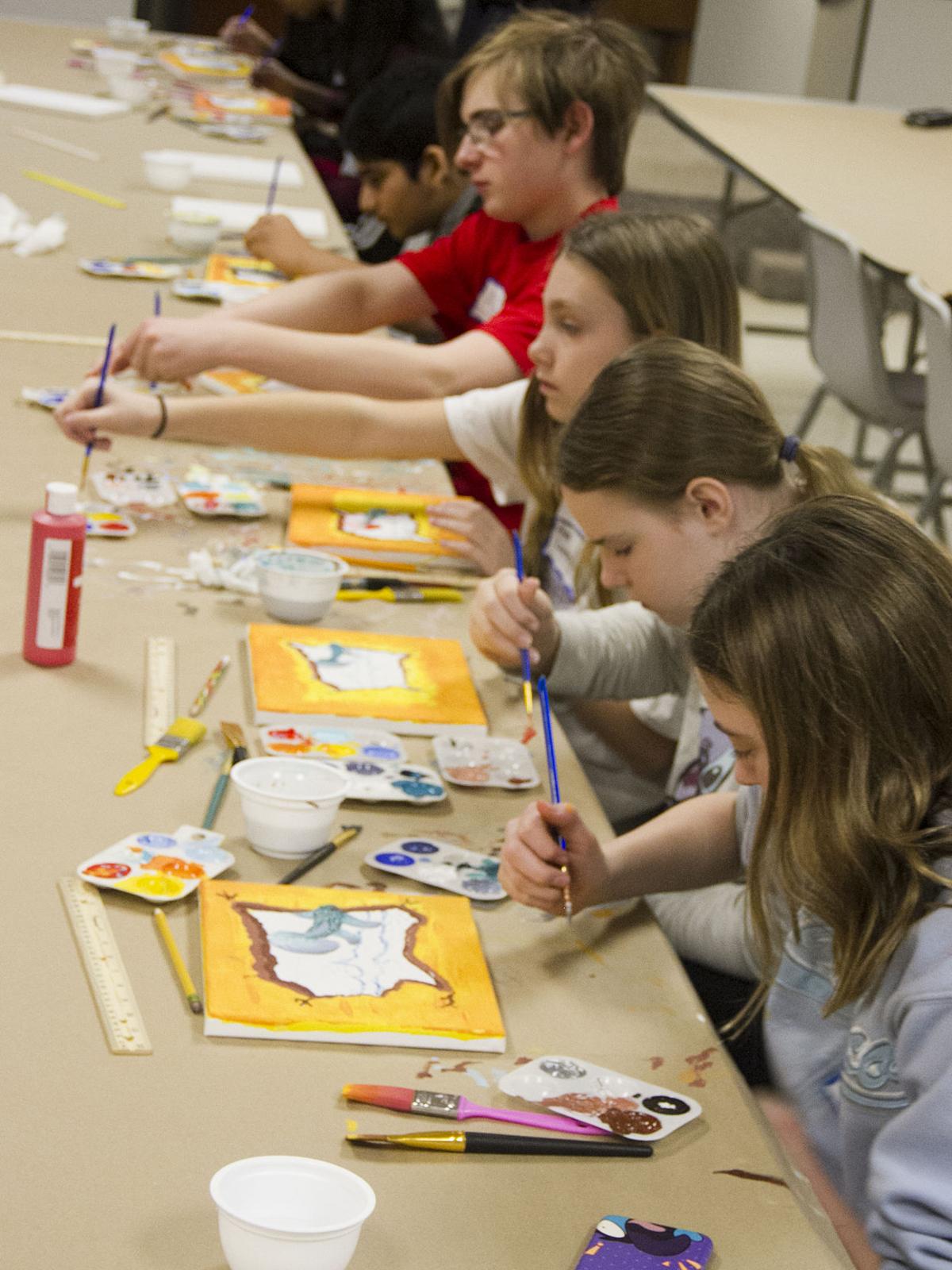 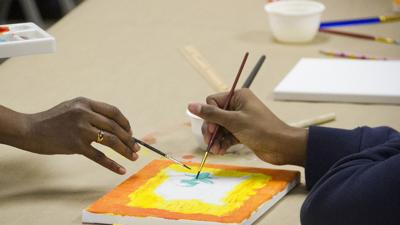 Harini Sakthivel works on her project.

Alec Richards works on his project.

Arnav Kumar and Sudhir Vemula work on their projects.

From left are Ava Lauterbach, Zoe Unruh and Amelia Keller.

Varun Shiralkar takes a close look at his painting to see the 3-D effect.

You’ve heard of a fish out of water, but not quite the way artist Selva Priya portrays it.

“We’re going to create a feel of depth with shadows and light in the painting, so that it looks like it’s not on a flat surface,” she told a group of youngsters recently at South Fayette Township Library. “It creates an embossed effect with all the shadows in it.”

Starting with a blank canvas and guiding her students along the way, everyone involved emerged about two hours later with paintings in which the fish, indeed, appear as if they’re more three dimensions than two.

Priya, who prides herself on the inventiveness of her techniques, came up with the idea when planning for what became the first class she conducted at the library.

“I thought, teenage kids need some kind of a new technique, not like regular art,” she said, with plenty of actual three-dimensional possibilities available working with the likes of heavy paint, modeling clay or plaster of Paris.

But all of that takes a long time to dry.

“So we talked about that and finally decided we would just create a painting that would give a depth feeling with shadows and light,” Priya said. “They would also have something that they could take home immediately, not making it dry for one more week.”

The South Fayette resident has been painting since she was 9, more prolifically when she was younger and less so when she started a career, got married and eventually was raising twins, Kavya and Oviya, now 8.

About three years ago, she started again in earnest.

“I already had this passion and interest, so I kept doing more and more paintings,” she said. “What really was a big step was the Emerging Artist scholarship.”

Each year, the Dollar Bank Three Rivers Arts Festival awards scholarships to individuals with little to no experience exhibiting in festivals. Included are complimentary booths, tents, tables and other necessary items, along with mentorship and networking opportunities.

When she applied for a 2019 award, Priya knew she’d be up against some stiff competition.

“Even to pay and get a booth there, it is really tough. So a lot of people told me, ‘It’s not for local artists. It’s very high-end,’” she recalled. “But I somehow had the confidence that I would somehow go through this.”

Again, her inventiveness paid off:

“They only pick artists who have their own original-themed artwork.”

Priya is self-taught, picking up the paintbrush at age 9 and soon winning art contests in her hometown of Tirunelveli in the Indian state of Tamil Nadu, not far from the nation’s southern tip.

As a university student, she had the opportunity to display her talents on an eminently visible scale.

“For events, they would call me to do giant-sized rangolis in front of the college,” she said, referring to the art form in which patterns are created on the floor or ground using materials such as colored rice, sand or flower petals.

She moved to the United States 12 years ago when her husband, Yuvaraj, took a professional position in the Pittsburgh area. After her children turned 5, Priya went to work as a clinical data analyst for UPMC.

As of September, she has a second job.

“A lot of people were asking me, ‘You have great talent. Why don’t you teach our kids?’” she said, and at first, she balked because of the time investment. “Then I thought I should take this art to other people. I should start teaching.”

She now has about 30 students taking lessons at her Priya Arts studio. Among their assignments are making special creations for holidays, including Christmas cards for senior citizens.

“That was really touching. A lot of them said they don’t get visitors or don’t get any cards during the holiday season,” Priya reported. “The kids were so happy that their artwork had some meaning.”

With Valentine’s Day approaching, she said, a similar project is in the works:

“When the students know that it’s creating a meaning, that somebody is looking forward to their art, they are really practicing well and coming out with good paintings. It’s a win-win.”