You are the owner of this article.
Edit Article Add New Article
You have permission to edit this article.
Edit
Welcome, Guest
News
Sports
Life & Culture
Events Calendar
Lottery Results
Fish Fry Map
Weather
Classifieds
e-Edition
South Hills Living
Get Our Newsletter
Get the Almanac
Advertise With Us
Submit Content to The Almanac
Contact Us
About Us
1 of 9 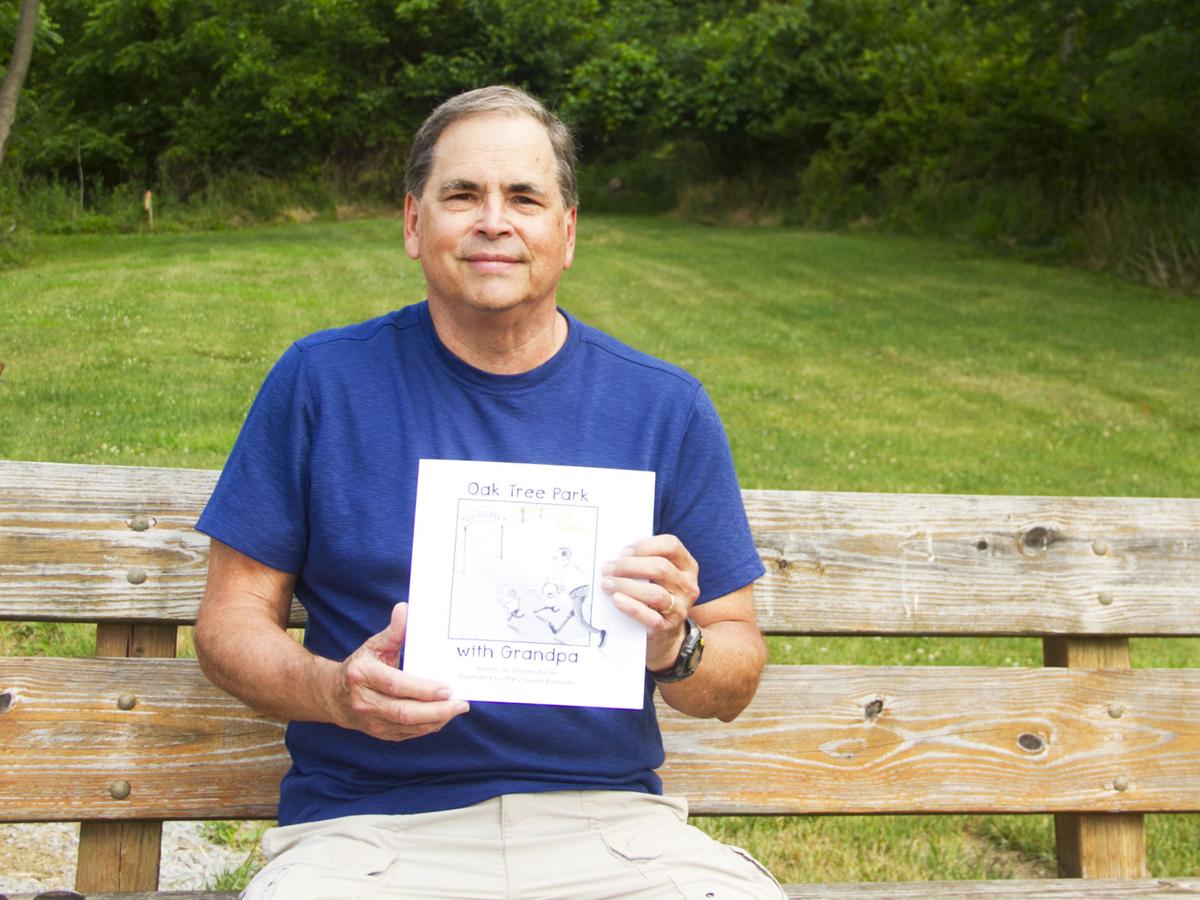 Bill Morse displays his latest book at the title location in Bethel Park. 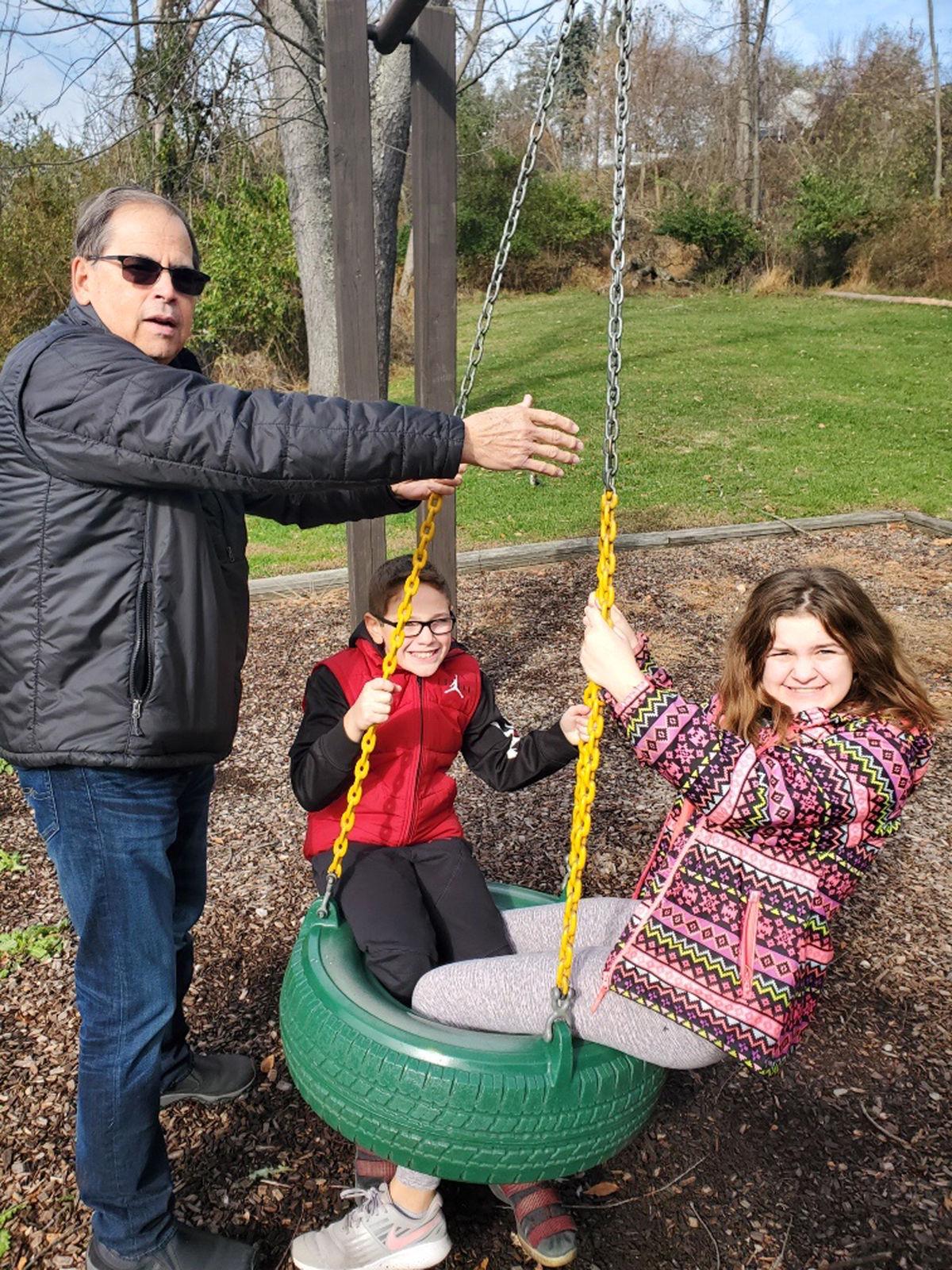 Gavin and Alana Morse enjoy a tire swing in Oak Tree Park, with their grandfather helping with the proceedings.

Then: Gavin and Alana Morse at Oak Tree Park, circa 2011 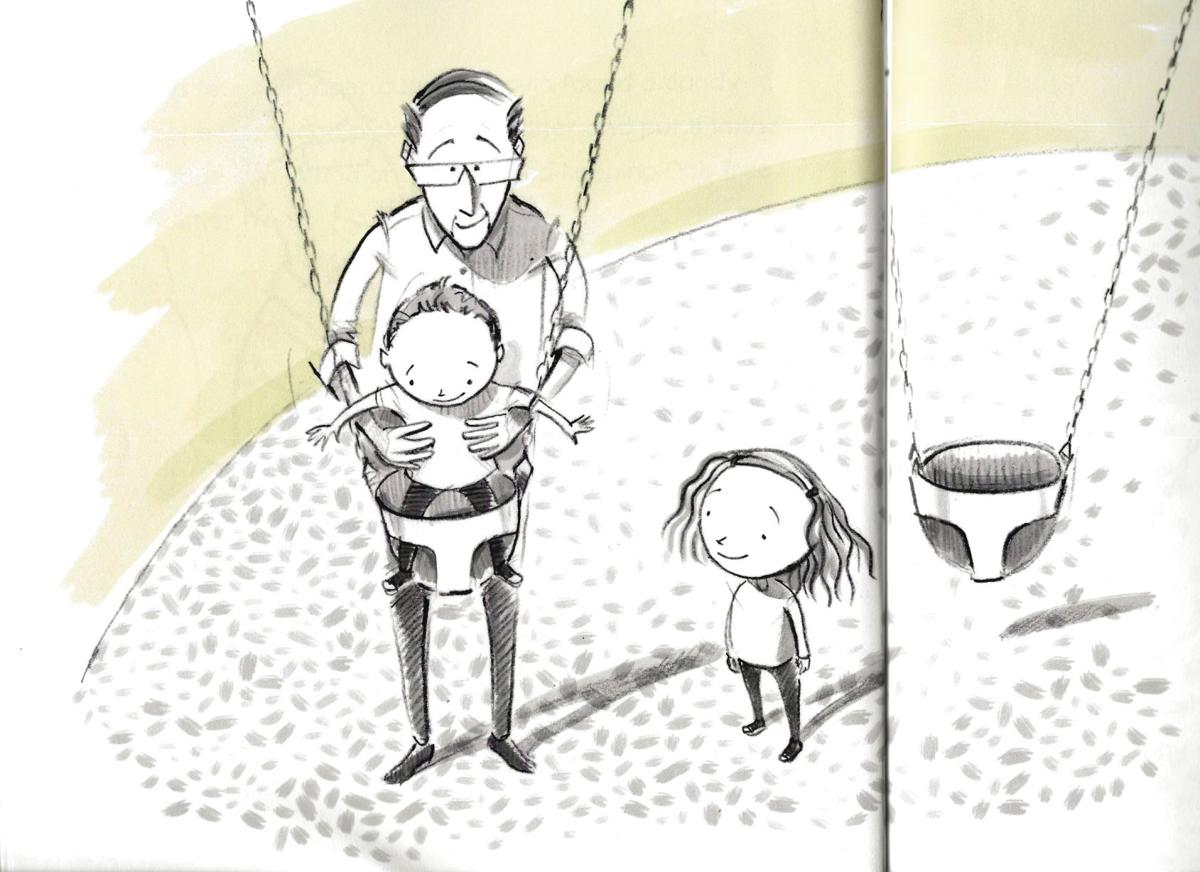 Illustration by Mary House-Richman in “Oak Tree Park With Grandpa” 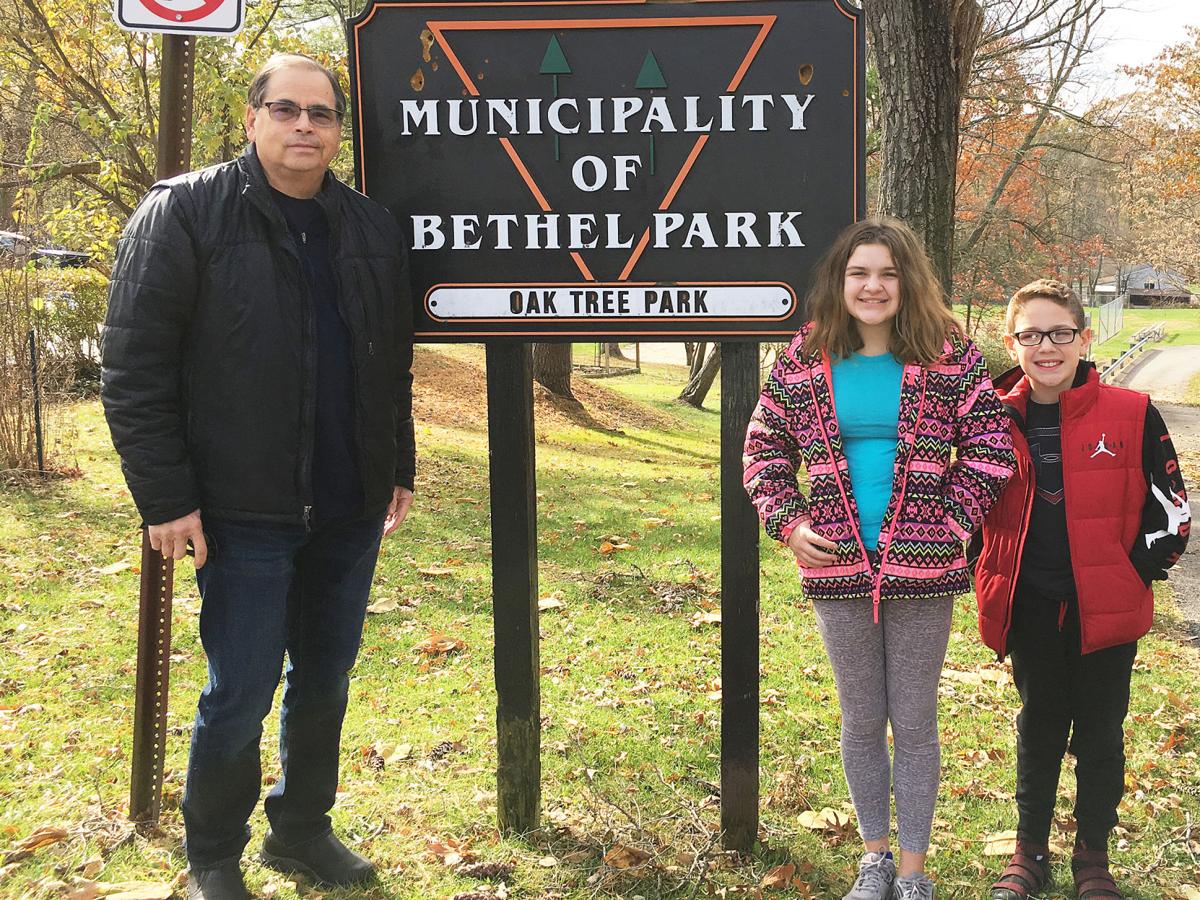 Bill Morse with grandchildren Alana and Gavin Morse, years after the events chronicled in “Oak Tree Park With Grandpa.” 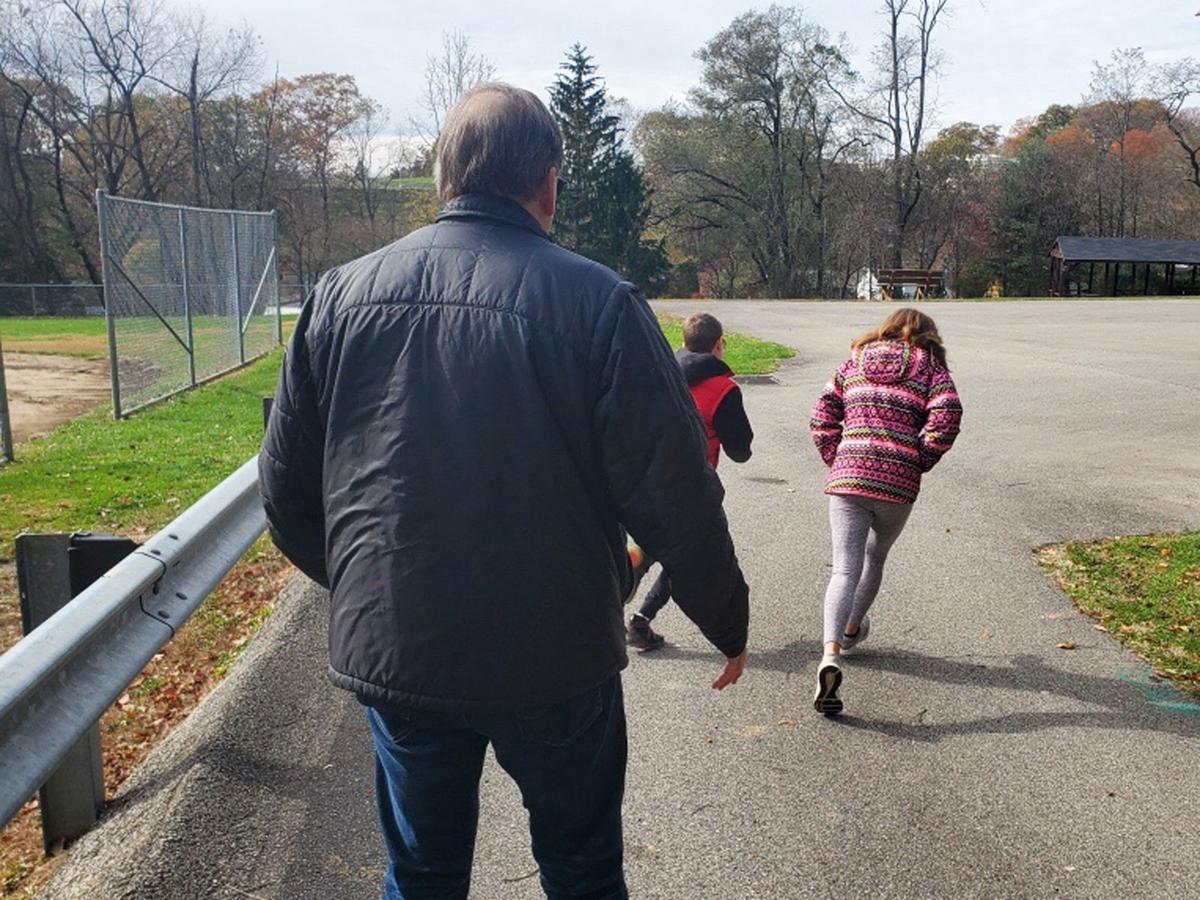 Gavin and Alanna head toward the playground, just as they did when younger. 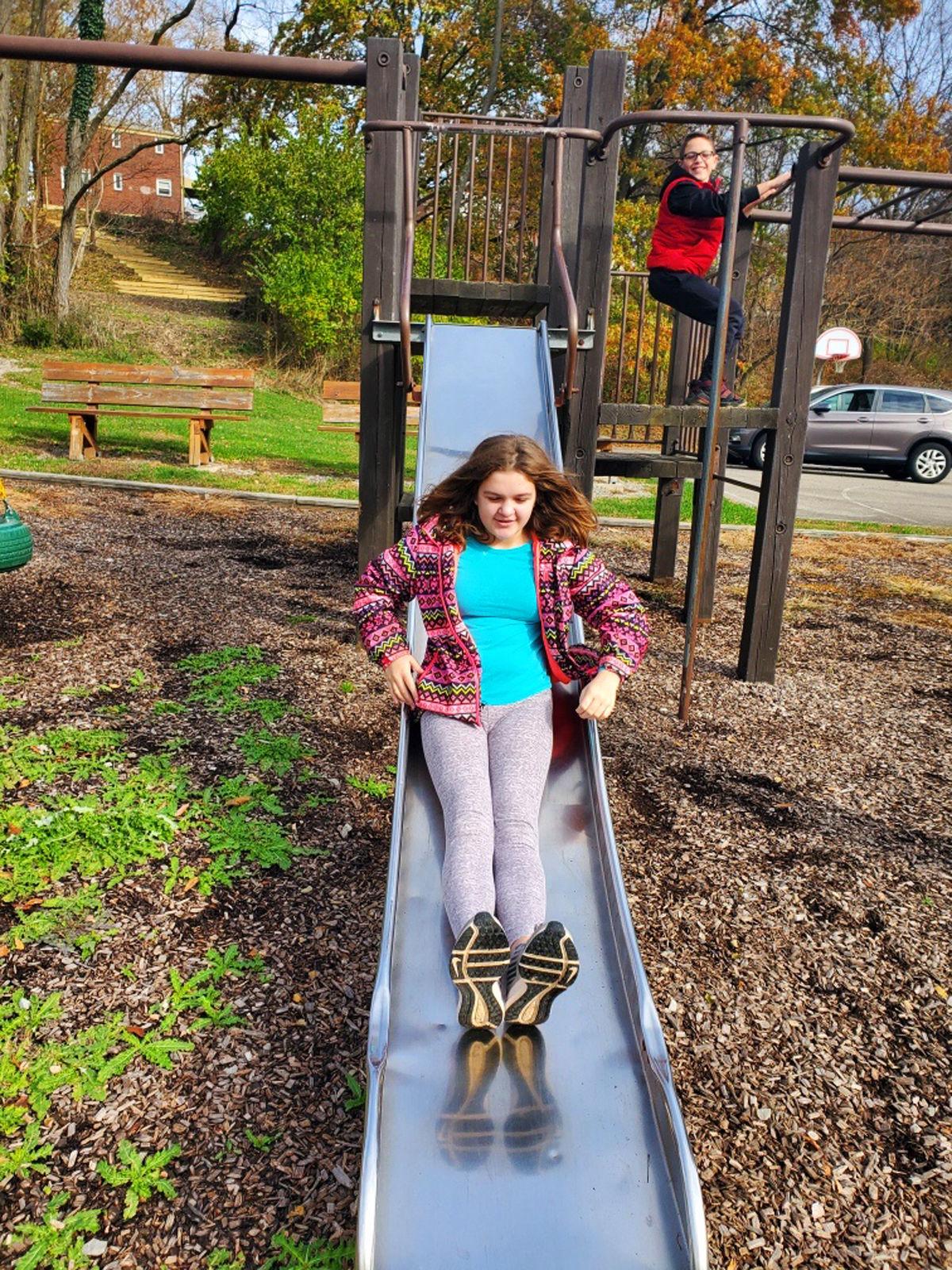 Alanna tries the sliding board on an apparatus that since has been removed from Oak Tree Park. 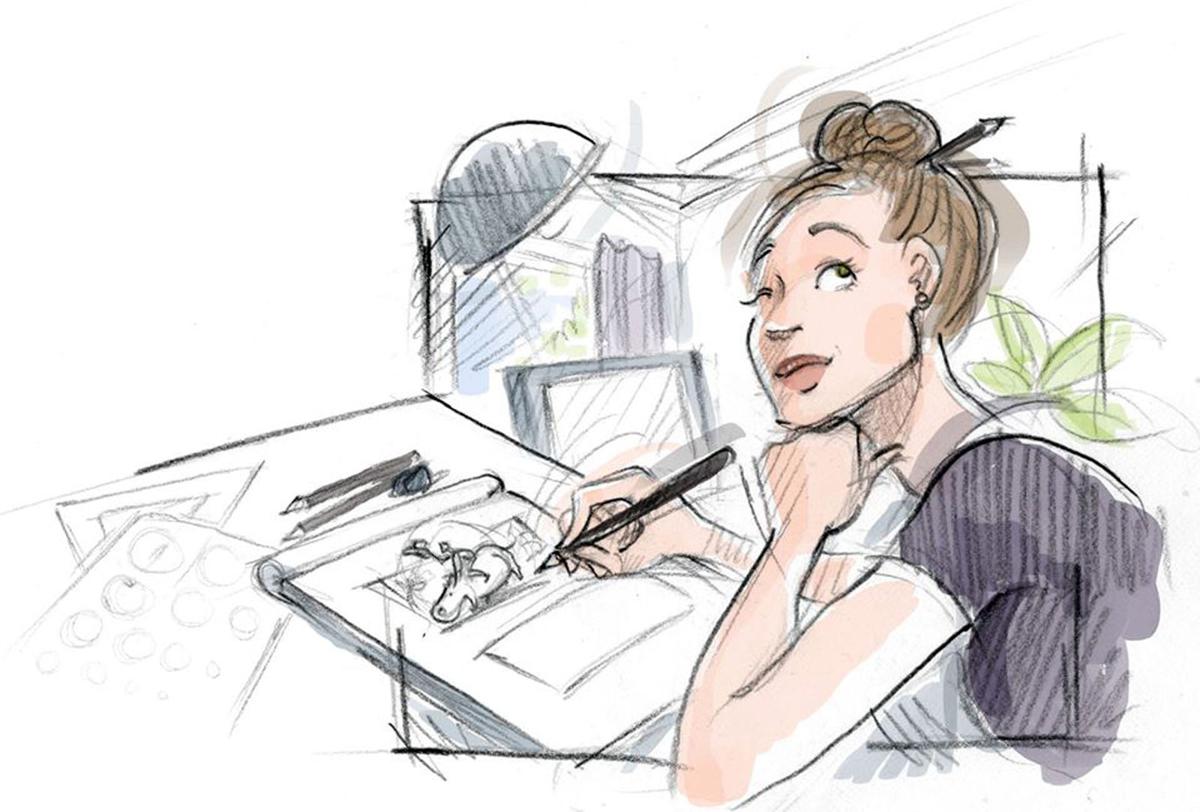 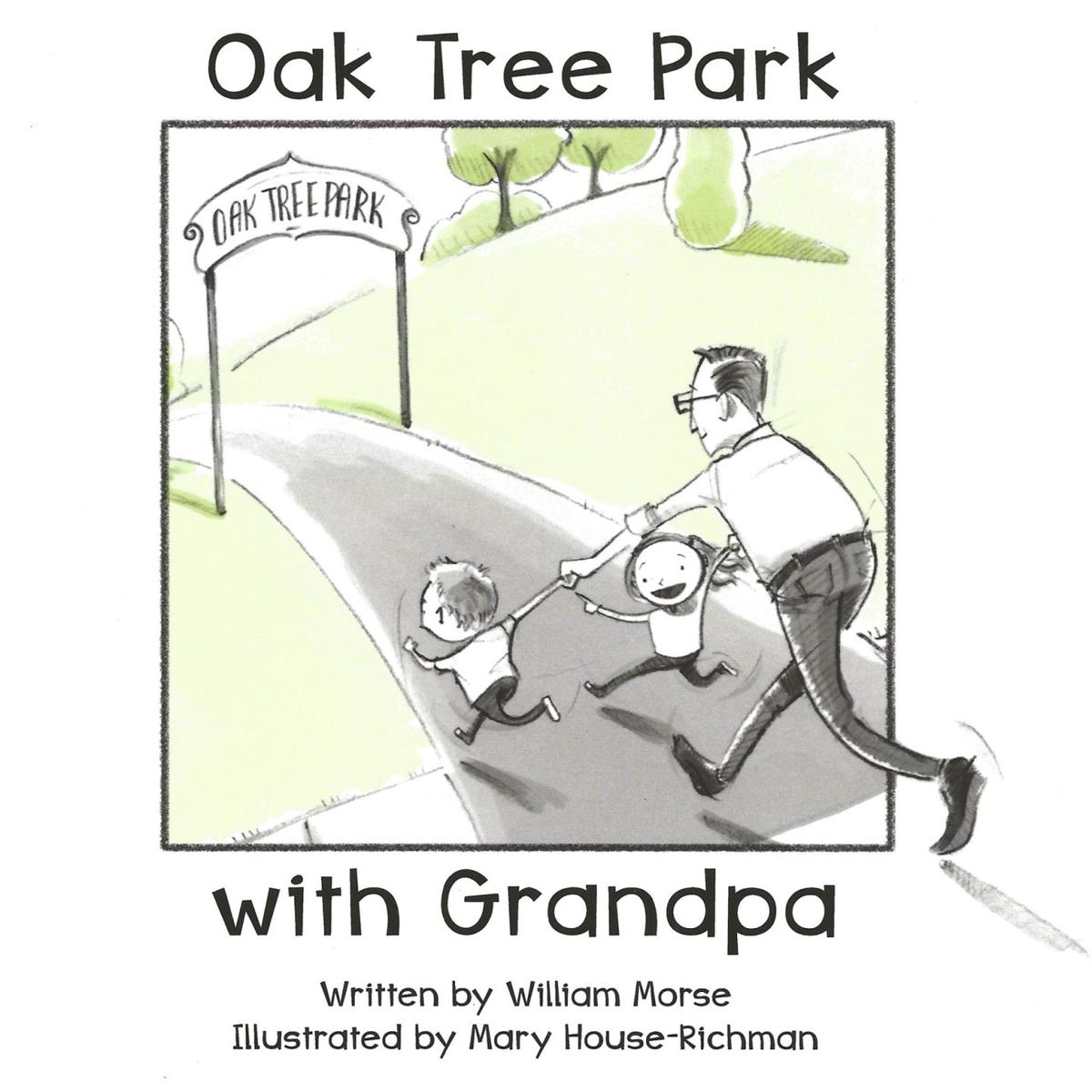 Bill Morse displays his latest book at the title location in Bethel Park.

Bill Morse with grandchildren Alana and Gavin Morse, years after the events chronicled in “Oak Tree Park With Grandpa.”

Gavin and Alanna head toward the playground, just as they did when younger.

Alanna tries the sliding board on an apparatus that since has been removed from Oak Tree Park.

That serves as a wistful mantra for many a parent and, in Bill Morse’s case, a grandparent.

He has many a fond recollection of spending quality time with his children’s children, memories he has preserved in a distinctive format.

“Oak Tree Park With Grandpa,” taking its name from the Bethel Park recreational area off Summit Street, is the latest in a series of books he is writing for children, featuring his grandkids as main characters.

In this case, they’re Alana and Gavin Morse of Upper St. Clair, now both in double digits as far as age goes. As even younger youngsters, they would become particularly excited about visits to the park near their previous home.

The entrance to Oak Tree Park involves a walk down a relatively steep hill, and Bill would hold hands with Alana and Gavin as they proceeded.

“We’d talk about safety first, because this is a steep road for little kids, and they’d want to run,” he recalled. “I would let them go when I thought it was safe, and they’d take off toward whatever swing or whatever slide. Usually, it was the same sequence. They’d go to the slide first.”

“SAFETY FIRST” – the phrase is capitalized throughout the book – turns out to be a recurring theme, including when Grandpa and the youngsters do everyone a favor by ridding the park of litter.

“Well, they weren’t allowed to,” Bill recalled, at the insistence of their grandmothers. “So they would point out the litter, and I would pick it up.”

The sequence of events is illustrated by Mary House-Richman of Portland, Ore., who received high praise from the author.

“It’s really been the key to this whole thing,” Morse said.

They’re working on another book – it’s seashore-themed, with magical mermaids and all – that will represent their fourth effort together after being connected through Bill’s daughter, Julie Morse Kenney of Glenside in suburban Philadelphia.

She’s the mother of his other grandchild, Colton, who figures prominently in Bill’s 2019 books, “The Star and Her Friends” and sequel “The Star and the Tree.”

“I rescue a star who never gets picked as an ornament,” Bill said about what he writes in the former. “You know how you might have a box of ornaments, and you always leave one in that box. And that little ornament gets sad.

“Thankfully, that ornament has friends who get picked, and then they invite the star to clean up her act. And they put batteries in, and they have a dog that helps.”

The story has a Christmas tree inquiring of the ornaments:

“What’s going to happen to me? You guys are all going to go back in the box. Where does the tree usually go?”

“And so the dog says, ‘Well, they usually drag the tree out to the end of the driveway.’ And the tree start to cry,” Bill explained. “Santa Claus comes and checks the tree out and says, ‘You’re not recyclable. You’re reusable.’ And so the tree gets put in the basement.”

Bill pointed out that many of his stories have the common theme of rescue, which goes back a long way.

“It started when I was a child, and I used to tell stories to my sister when we were doing the dishes. It was a story about a magical witch called ‘Witch Willard,’” he recalled. And the title character would accomplish feats like saving folks from a flood.

Also contributing to Bill’s interest in the theme was his 34-year career with Pennsylvania Department of Corrections.

“I ran community-based corrections programs,” he said, “rescuing offenders coming out of jail and helping them reintegrate.”

Now that he’s retired, the South Park Township resident has plenty of time to pursue being an author. And in “Oak Tree Park With Grandpa,” he gives credit where it’s due, dedicating the book to the grandchildren who enjoyed the visits so much.

“Also,” he writes, “dedicated to the grandmas, Barbara Gardner and Carole Morse, who joyfully took care of Alana and Gavin while grandpa Bill Morse took naps after his walks and ice cream trips.”