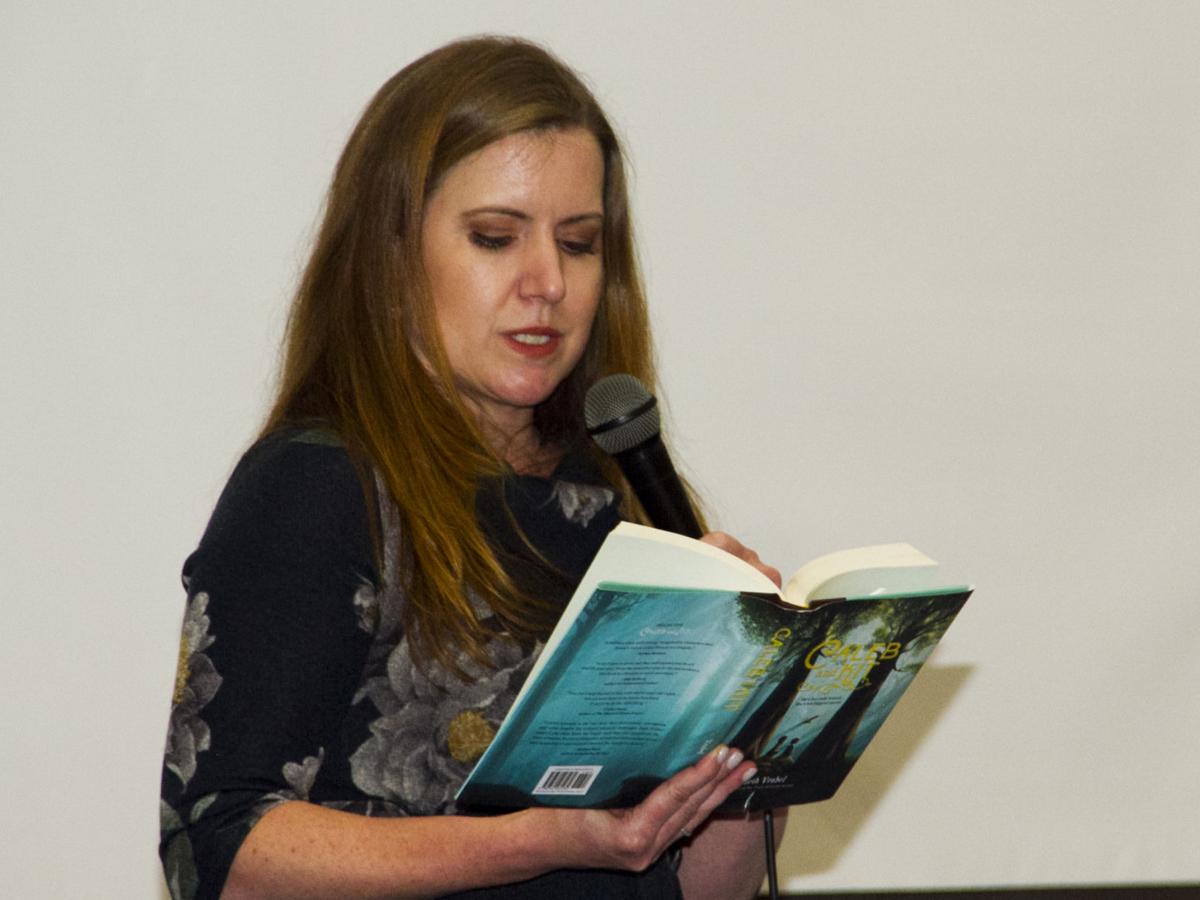 Beth Vrabel reads from her book “Caleb and Kit” during her visit to McMurray Elementary School. 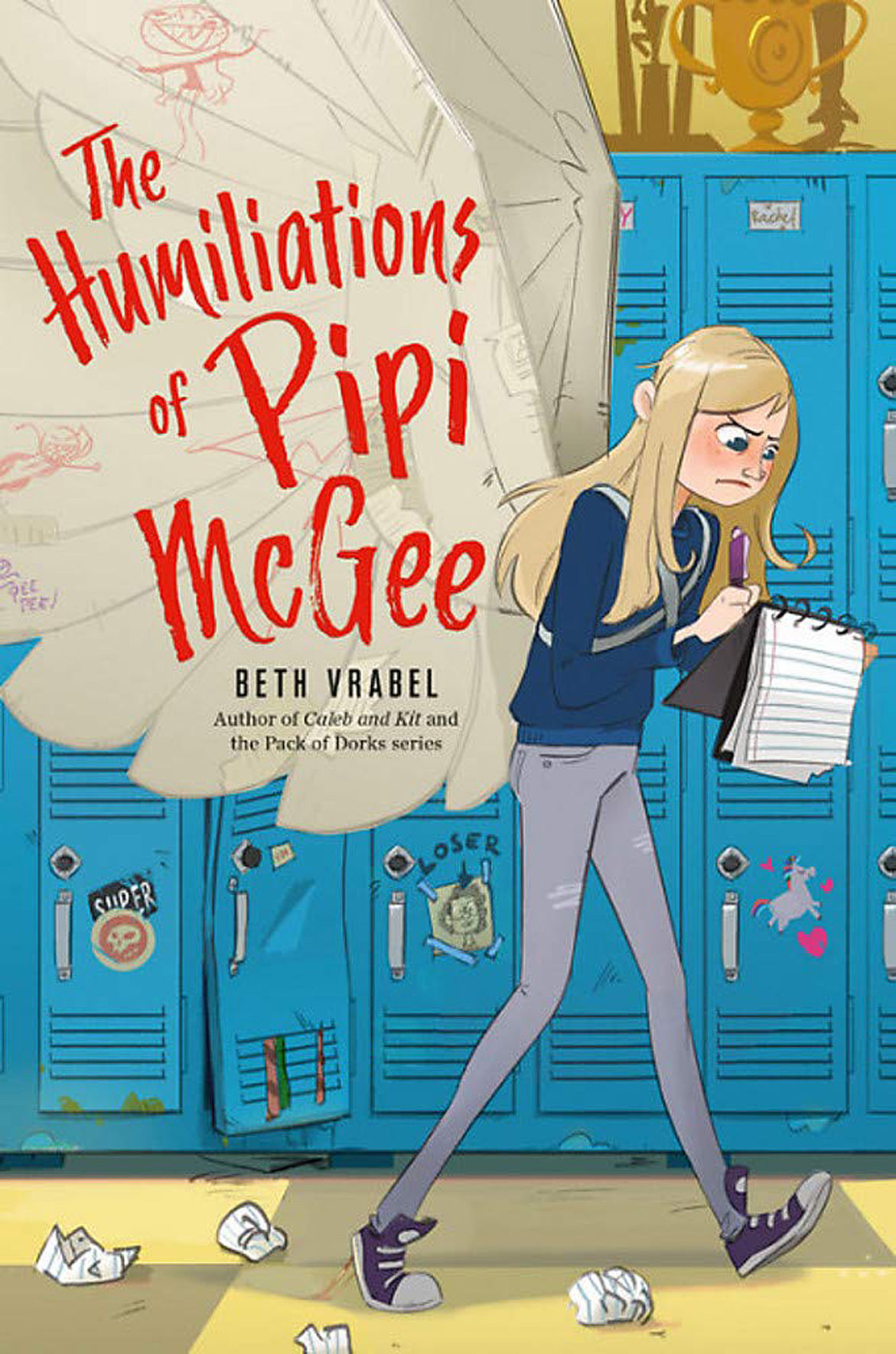 Beth Vrabel reads from her book “Caleb and Kit” during her visit to McMurray Elementary School.

When she was young and not particularly athletic, Beth Vrabel made the winning shot in her grade’s championship basketball game.

The author of books for middle graders received a hearty round of clapping when she told the story during a recent visit to McMurray Elementary School in Peters Township. The reaction she got at her own school wasn’t quite as friendly.

“When I turned around, I didn’t get this wonderful applause,” she recalled. “I got a long boo.”

It turned out that Vrabel, who was less than popular among her classmates to begin with, had put the ball in the wrong basket.

“That’s a moment that I relive again and again, and really need to drive home why that stays with me,” she said.

She has had nine books published, and two more are scheduled for next year. Her latest is “The Humiliations of Pipi McGee,” which came out in September and drew inspiration from the long-ago championship game and, well, other humiliations of Beth Vrabel.

And then there are the further humiliations of other people, in response to a question she posted on Facebook:

“What is the worst thing that happened to you in middle school? I’m going to use it for a book.”

Much of her McMurray presentation focused on the power of storytelling and encouraging the school’s fifth- and sixth-graders to follow her lead and give writing a try, something she first did when she was about their age.

“It was terrible. It was awful,” she admitted. “But I shared it with my mom. She read it, this terrible story, and instead of focusing on the problems, she focused on the potential and the person in front of her, that her quiet child had found her voice, discovered she was strong, discovered she was brave, because it takes to write a story down and it takes a whole lot of bravery to share your story.

“And then she looked at me and said, ‘Someday, Beth, you’re going to write a story and it’s going to be published.’ And I could picture a book with my name on it. That was the moment I became a writer.”

As such, she had some advice for the McMurray students.

“You don’t have to wait to be in charge of your story, to be the one telling your story. You already have your stories. You have unique experience, perspective, insight that can be a story only you can tell.”

The power also is there to tell the stories of otherwise reticent people, such as Vrabel’s father, who at her urging – and during a family gathering, to boot – revealed the details of his first kiss. It seems that a bunch of youngsters arrived in town to stay with their aunt, who lived two blocks away from his York County home, and he was urged by one of the visiting boys to kiss one of the girls.

“And my dad, a shy, quiet person, was like, no, until the girl put her hands on her hips and said, ‘Yeah, I dare you,’” Vrabel reported. “My dad looked around, gathered his courage and pecked her on the cheek. And at that moment, the screen door flew open and her aunt yelled, ‘What’s going on out here?’

“My dad jumped up, and he ran as fast as he could those two blocks back to his house. He slammed the front door. He ran up the stairs to his bedroom, slammed that door and didn’t come out again until those two weeks were up, and that little girl and her brothers and sister had left.”

At that point of the story, Vrabel’s great aunt recalled giving her father a hard time.

“This wasn’t my dad’s aunt who said that. This was my mom’s aunt,” Vrabel said.

“My parents had been married at that point for 15 years before they realized that their first kiss was with each other.”

Talk about the power of storytelling. Now, consider sharing yours.

It’s never too late, either.