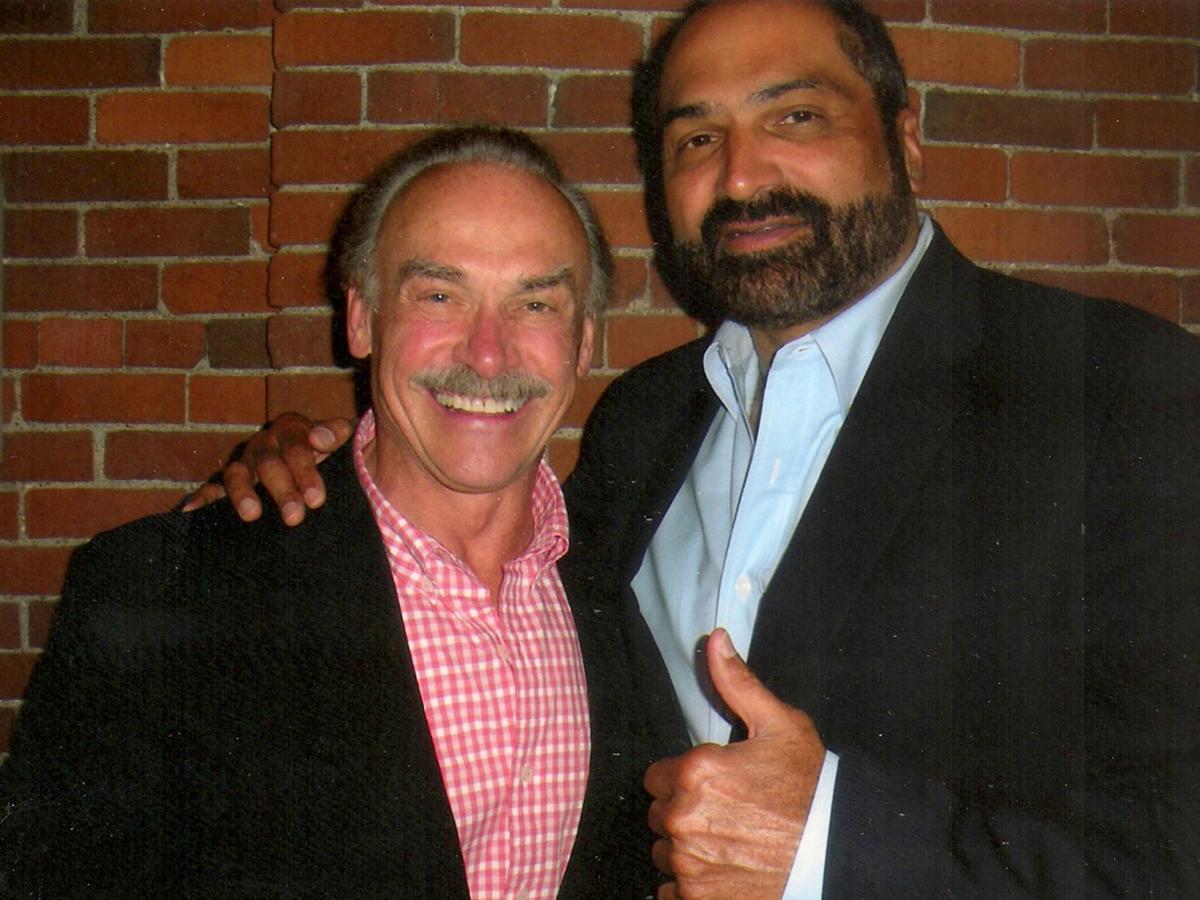 Featured on the back cover of “Franco, Rocky & Friends – It Pays to be a Good Guy,” is Jim O'Brien's photograph of Rocky Bleier, left, and Franco Harris. 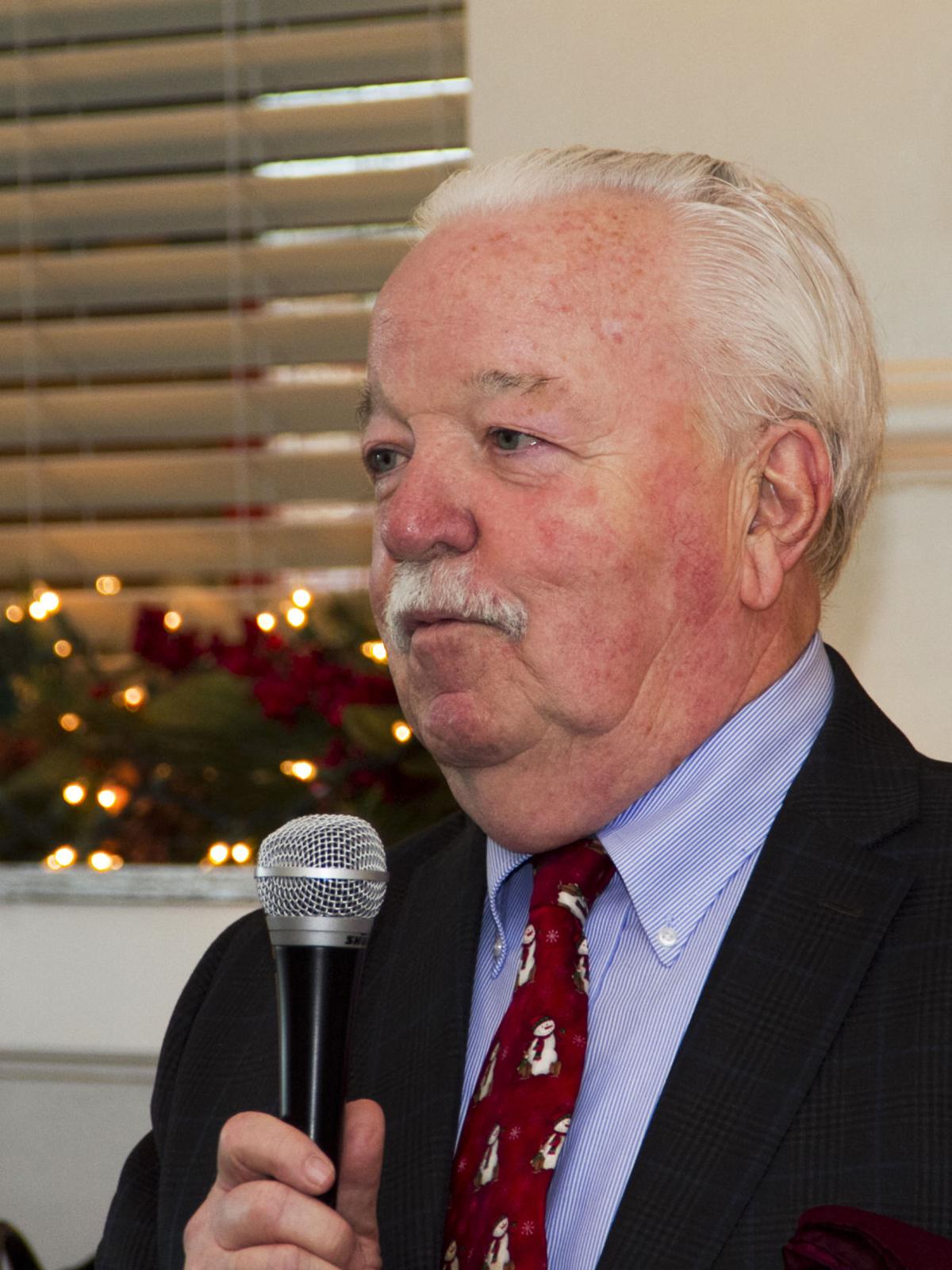 Jim O'Brien speaks during the Good Guys Luncheon series he hosts at Atria's Restaurant in Peters Township. Rocky Bleier and Franco Harris both have been guests of the series. 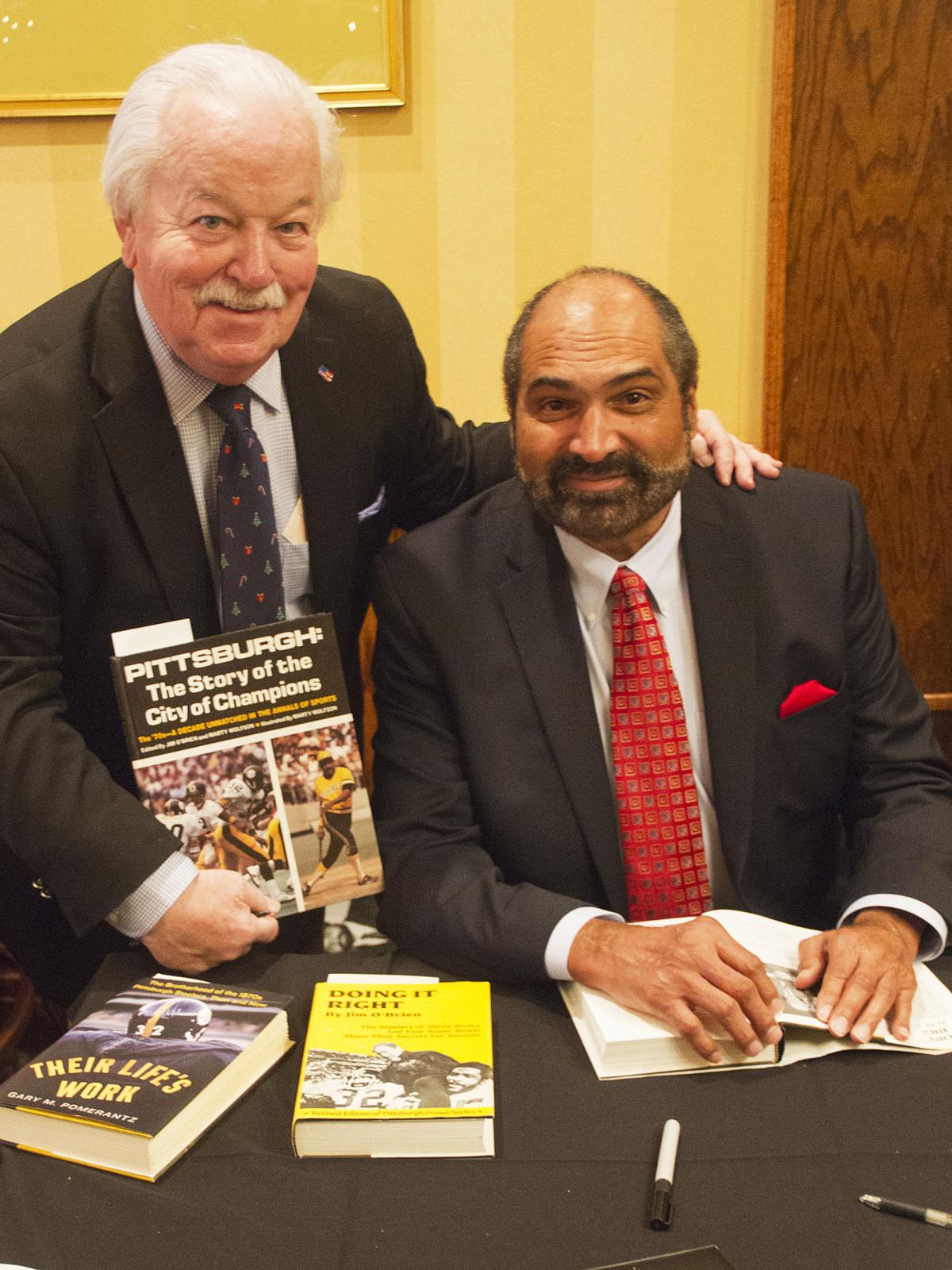 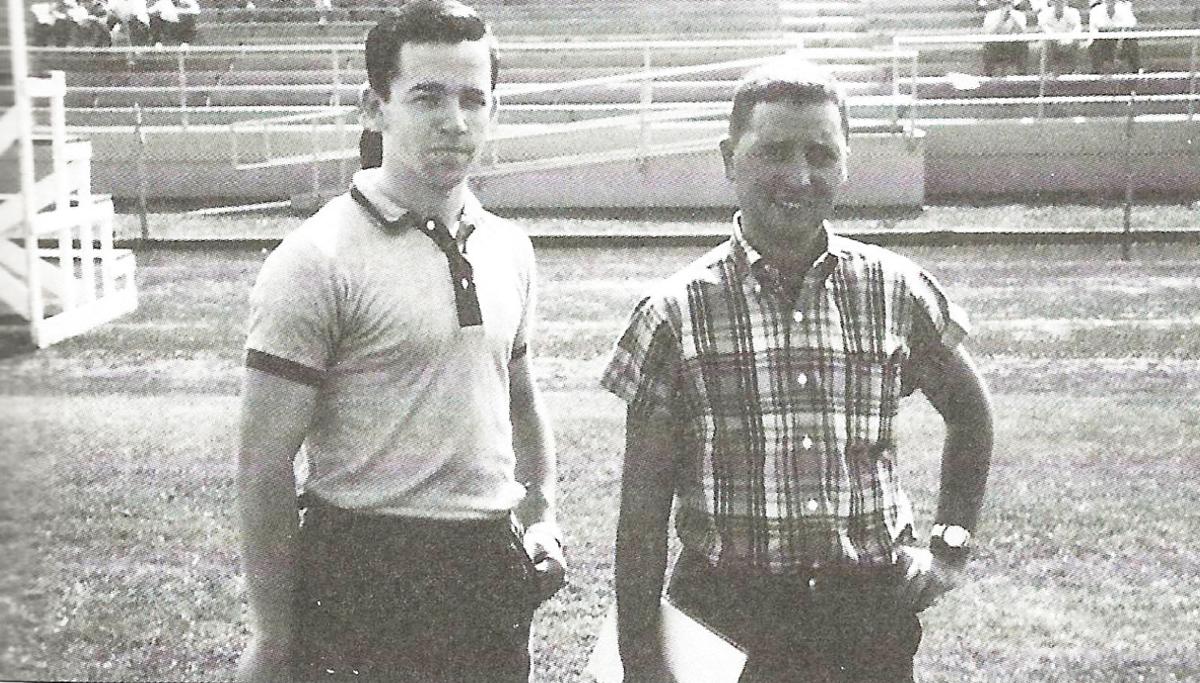 A photograph in the latest book by sports author and historian Jim O’Brien shows him standing next to the late Pittsburgh broadcasting legend Myron Cope, both young enough to look as if they could be contemplating asking classmates to the prom.

The shot is from preseason training for the University of Pittsburgh football team in 1962, giving some indication as to how far back O’Brien goes in covering athletic pursuits, in Western Pennsylvania and beyond.

In the introduction to the 480-page “Franco, Rocky & Friends – It Pays to be a Good Guy,” former Pittsburgh Steelers linebacker Andy Russell writes:

“Jim O’Brien is clearly the true chronicler of Pittsburgh sports teams and events, safeguarding our so meaningful sports folklore.”

The book bearing the title in honor of Russell’s running back teammates Harris and Bleier is the 30th O’Brien has published, and he will discuss it at 7 p.m. Jan. 30 at Upper St. Clair Township Library in an event co-sponsored by Peters Township Public Library.

“Franco, Rocky & Friends” reads much like one of O’Brien’s storytelling sessions: He has many of them, and they’re in no particular order. That kind of casual approach will appeal to readers who prefer to open a book at random and read a shorter section or two at a time.

A flip of the pages might reveal the story of Bleier, who was injured in mid-football career while serving in the U.S. Army – Robert Urich played him in the film version – returning to Vietnam decades after the fact.

Or perhaps readers will encounter the reprint of a question-and-answer piece O’Brien did with Harris for the August 1984 issue of Inside Sports magazine. And the date may be recognizable as about the time Harris was headed to Seattle to end his football career.

Wherever readers land, O’Brien is eager to share his reminiscences, observations and opinions from various conversations and interviews over the decades, in most cases presenting former Steelers and other Pittsburgh sports luminaries as regular folks, or the “Good Guys” of the book’s subtitles.

Its “& Friends” component is strong, with the author presenting stories involving a dizzying array of familiar names, including Pro Football Hall of Famers Mel Blount, Joe Greene and Jack Ham, and this year’s nominee Troy Polamalu, about whom O’Brien writes: “He seems too nice to be a pro football player.”

The hundreds of images throughout “Franco, Rocky & Friends” almost are worth the price of admission, so to speak.

From vintage shots of athletes in their prime to contemporary photos of retired legends, readers can spend quite a while reliving decades worth of Western Pennsylvania sports memories. Many represent the work of George Gojkovich, with whom O’Brien has worked for nearly 50 years.

Some of the images go somewhat beyond the sporting pale, such as a certain native of Hoboken, N.J., shown “enlisting” in the Franco’s Italian fan club in December 1972. Yes, Frank Sinatra joined the same month that Harris made one of the most famous plays in National Football League history, the Immaculate Reception.

In his book, O’Brien provides details of how the nickname for Terry Bradshaw’s effective playoff-game-winning completion to Harris, usually credited to Cope, came to be. It seems after the game, Cope received a call from a woman who told him a friend of hers named Michael Ord had proclaimed, loudly, in a downtown Pittsburgh bar:

“This day will forever be known as the Feast of the Immaculate Reception.”

A longtime Upper St. Clair resident who now lives in North Strabane Township, O’Brien doesn’t shy away from addressing the bad with the good, such as the stories of players like Hall of Famer Mike Webster who took turns for the worse after their playing careers ended. The author even includes a necrology of former Steelers of the past half century who have passed away, including punter John Bruno, who succumbed to skin cancer at age 27.

Even more briefly, he recalls a late-1960s encounter with pianist and Steel City native Erroll Garner, in Toronto, where O’Brien was covering a fairly new hockey team called the Pittsburgh Penguins.

“How do you account for the fact that so many great jazz musicians are from Pittsburgh?” the young journalist asked the music immortal.

Garner’s answer, again, almost is worth the price of admission:

“I guess because they were born there.”