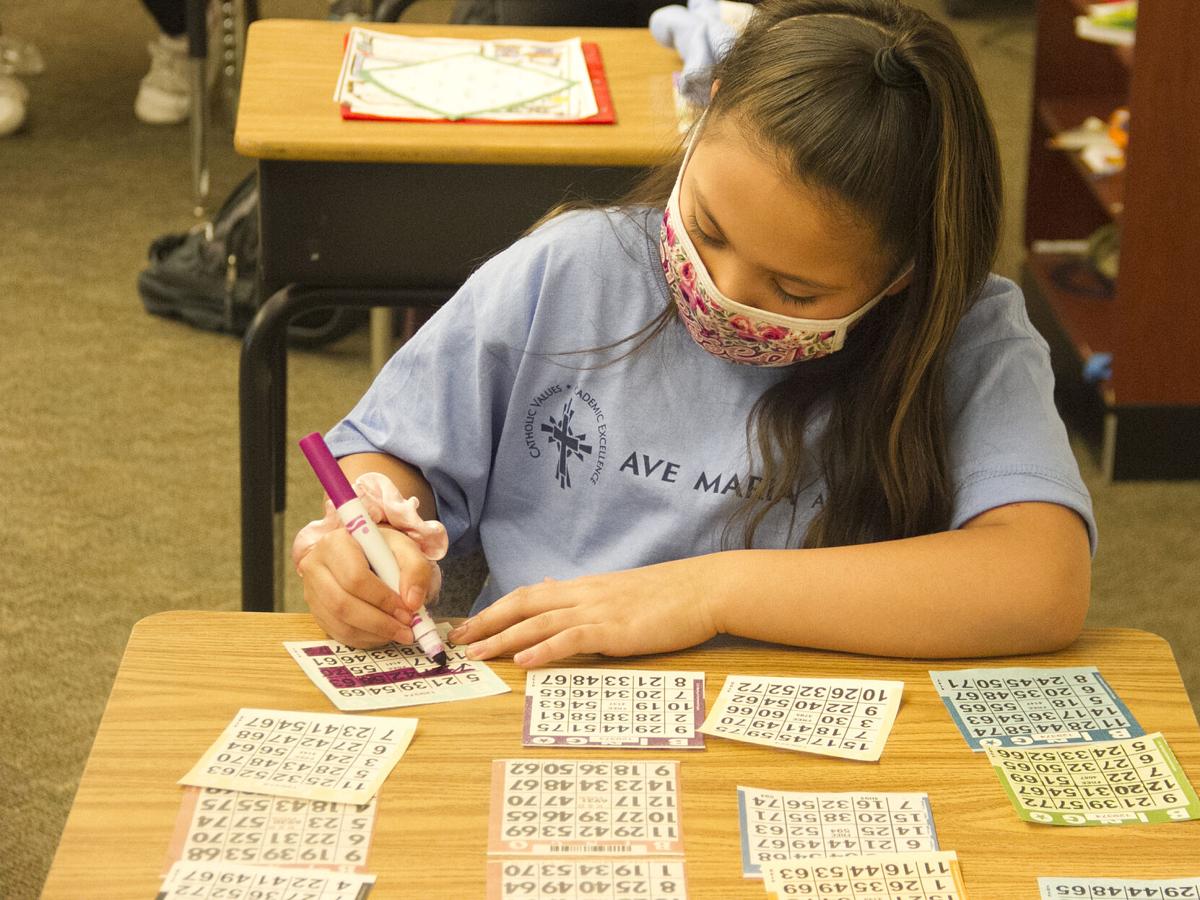 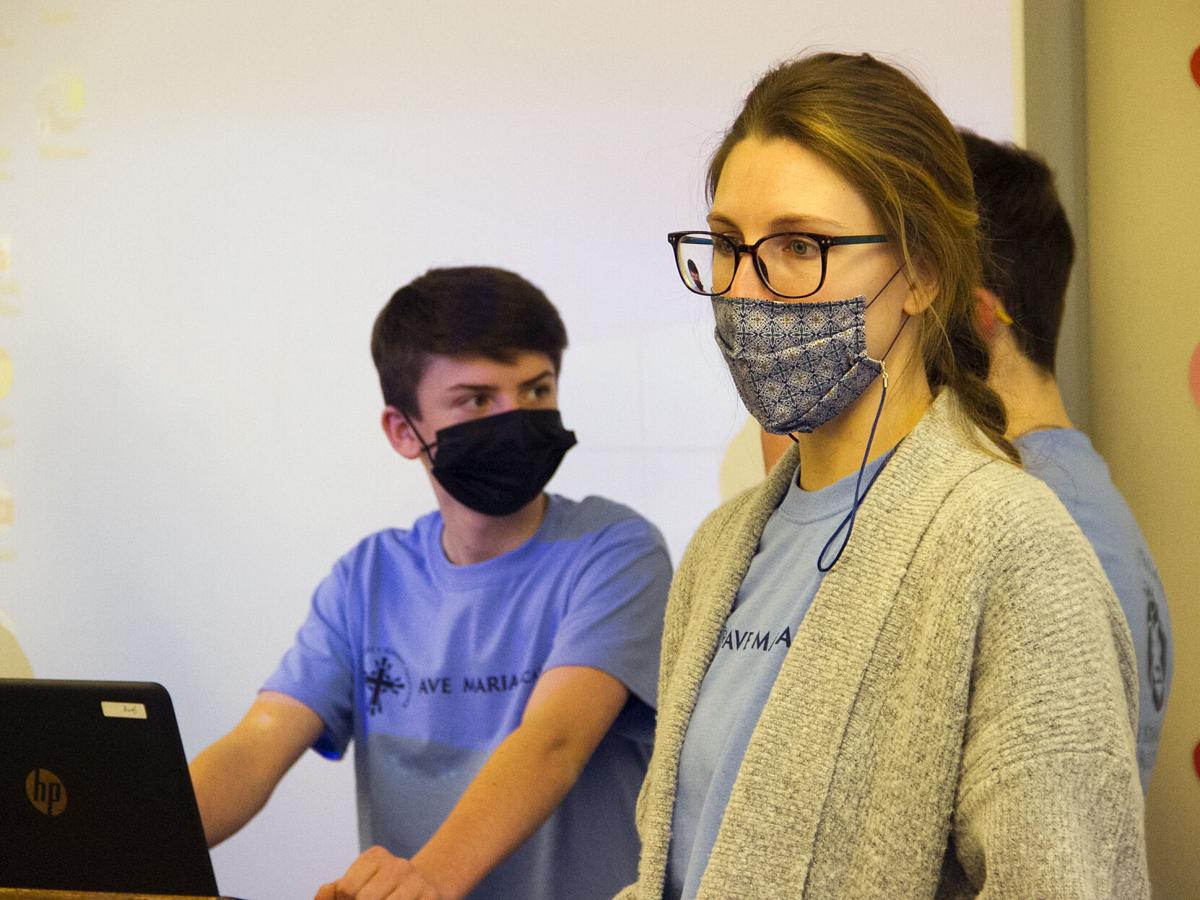 Teacher Kimberly Limberiou addresses her fourth-grade class prior to them embarking on a game of bingo as part of special Catholic Schools Week activities. 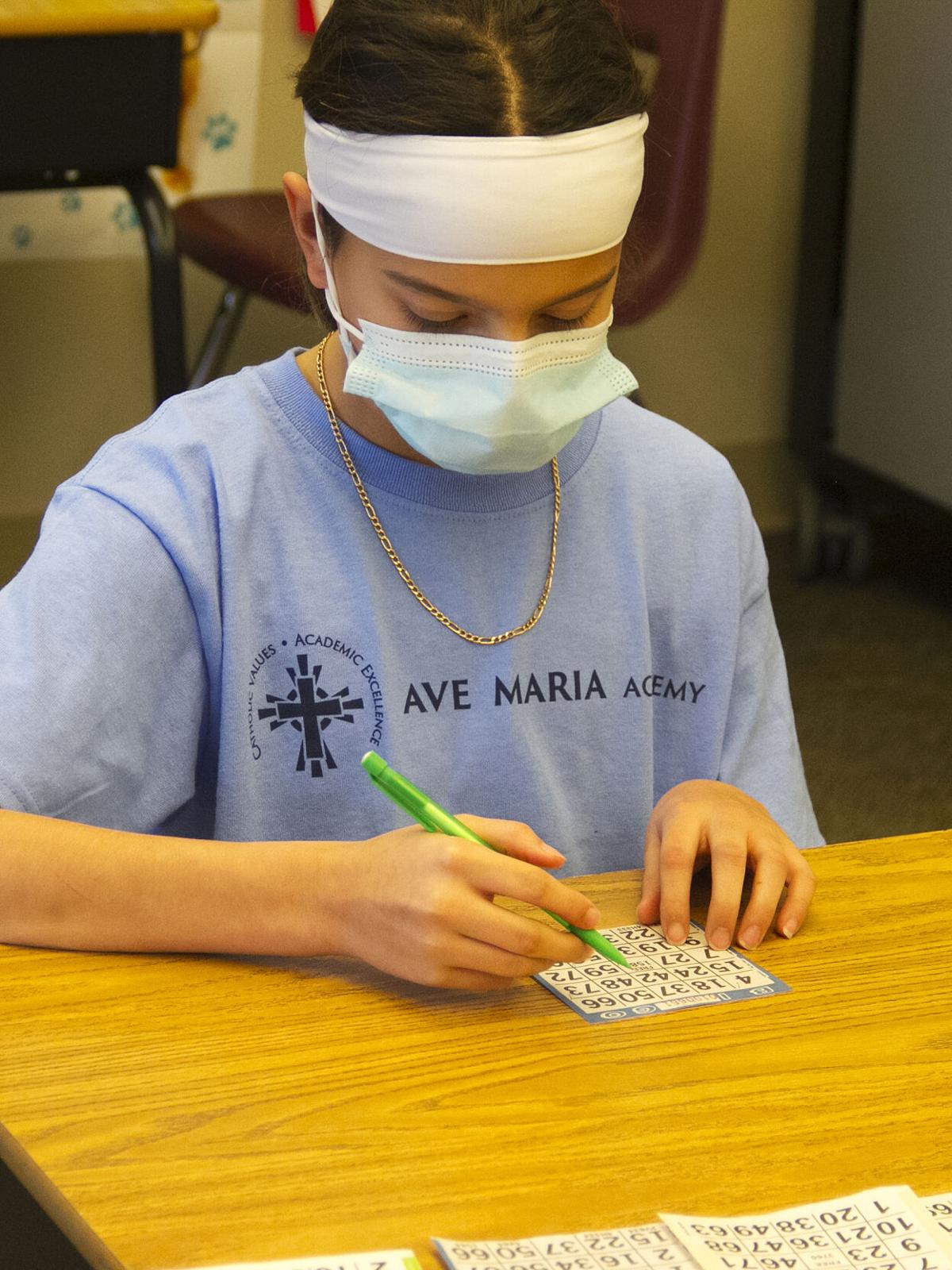 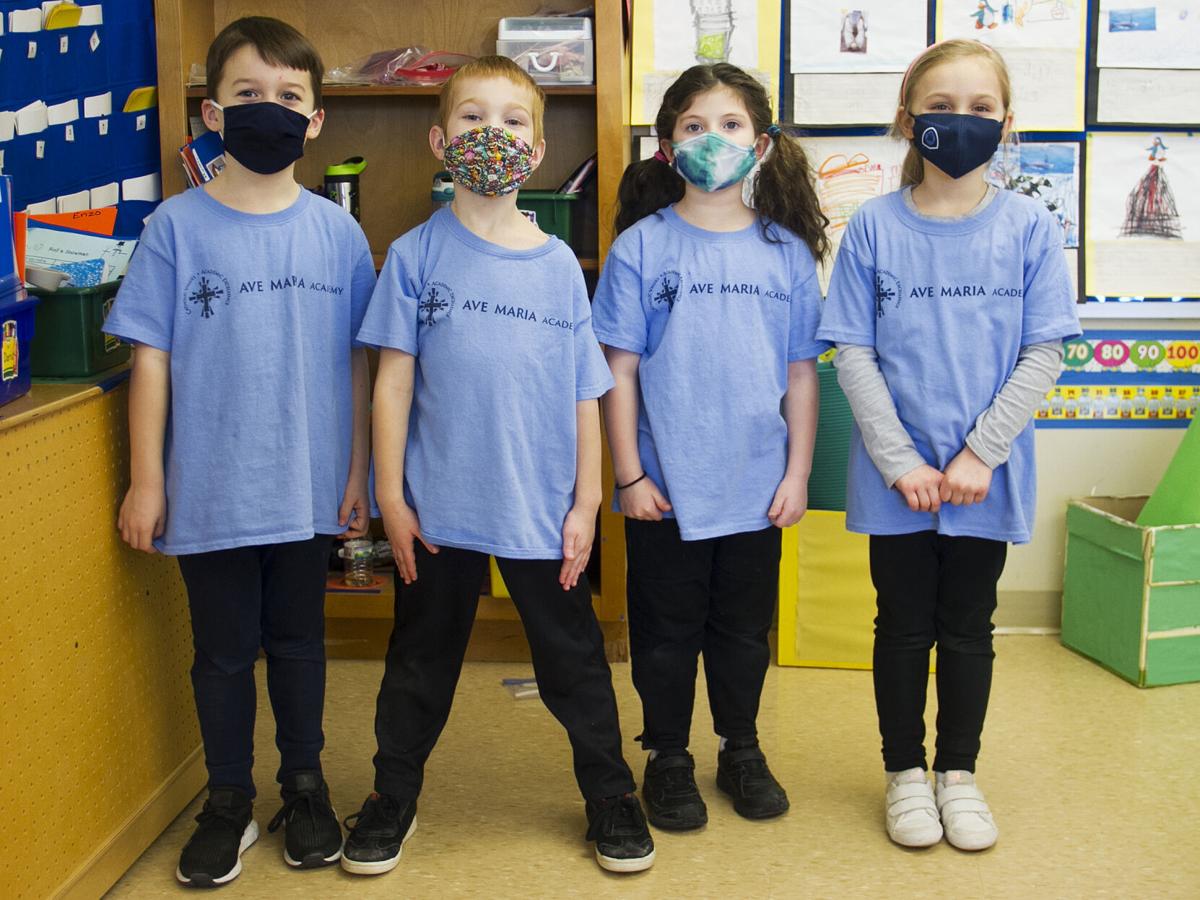 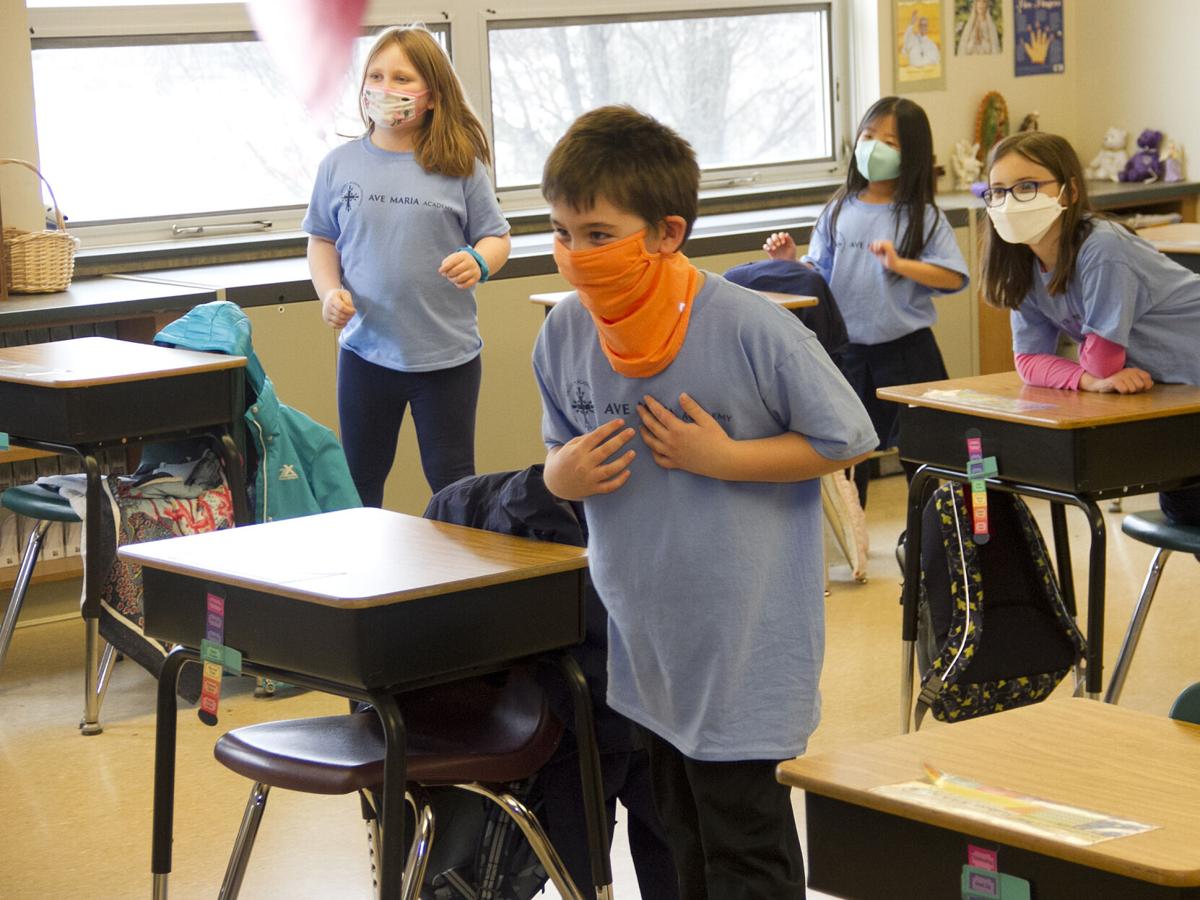 Getting ready to dance along to a video are, from left, Maria Smersky, Bernard O’Keefe, Paisley Tran and Nicole Paschke. 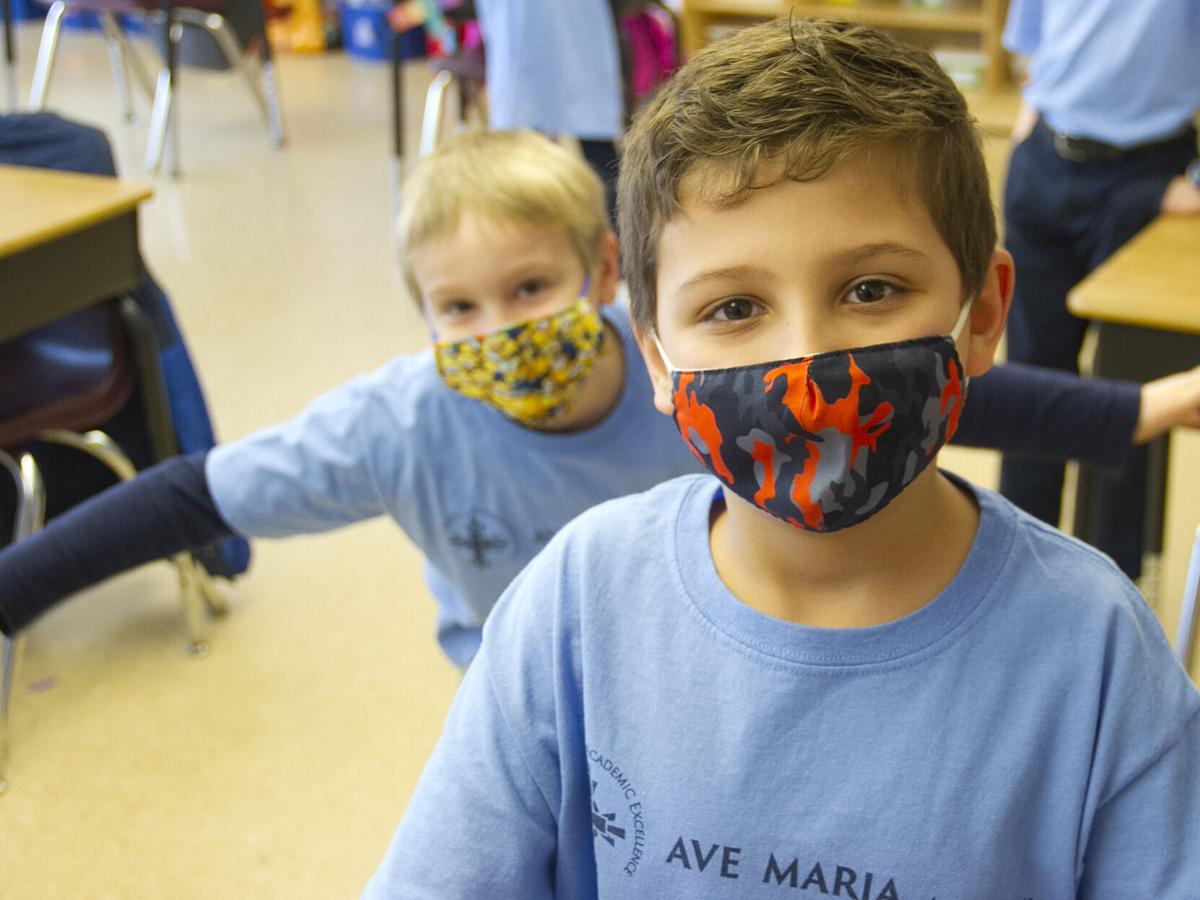 Smiling under those masks are Enzo D’Eramo, right, and Domenick Podkul. 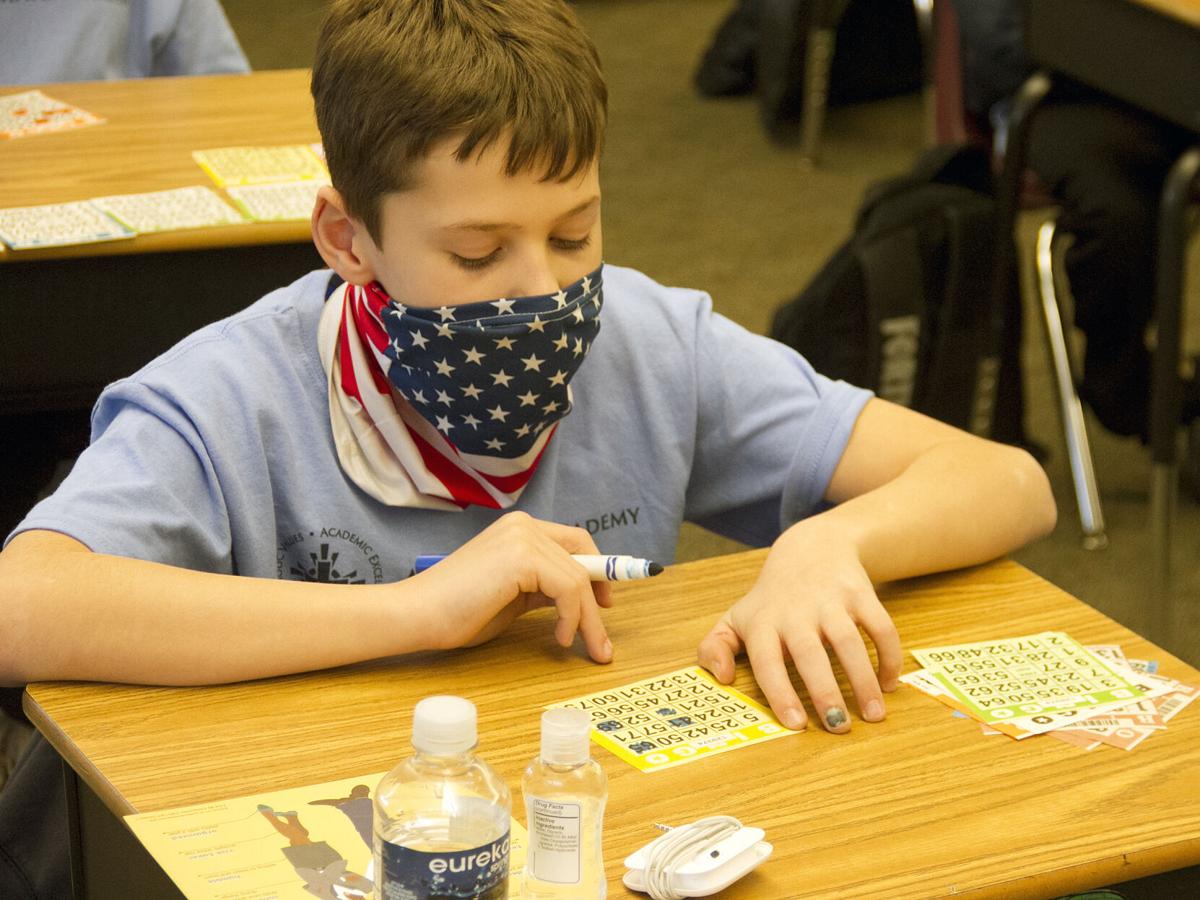 Gabe Crea gets ready to mark his bingo card.

Teacher Kimberly Limberiou addresses her fourth-grade class prior to them embarking on a game of bingo as part of special Catholic Schools Week activities.

Getting ready to dance along to a video are, from left, Maria Smersky, Bernard O’Keefe, Paisley Tran and Nicole Paschke.

Smiling under those masks are Enzo D’Eramo, right, and Domenick Podkul.

Gabe Crea gets ready to mark his bingo card.

The manner of determining the numbers may be different, but the end result remains the same:

Rather than using the traditional bingo balls, students at Ave Maria Academy’s Bethel Park campus had a computer program handy for generating everything from B-1 to O-75.

And in Kimberly Limberiou’s fourth-grade class, Lupita Berumen Roque was the first student to fill five of those numbers across her bingo card.

Playing the time-honored game represented one of the many special activities during Catholic Schools Week, which was held Feb. 1-5. Ave Maria’s celebration represented the first for the new school, which was created by the Diocese of Pittsburgh prior to the start of the current academic year with campuses in Mt. Lebanon, previously St. Bernard School, and at the former St. Thomas More School in Bethel Park.

“As Principal of Ave Maria Academy, I’ve had the honor of witnessing our teachers and professional staff, as we embrace this tradition of celebrating Catholic schools daily, both spiritually and intellectually, during this unique time in our history,” administrative leader Lynne Lynch said. “I am thankful to our families, our benefactors and most importantly, our children, for continuing this long line of shared values and academic excellence.”

In meeting the challenges of the COVID-19 pandemic, Catholic Schools Week activities included a virtual component.

“I think that the kids have adapted to that so many months into school now that they’re so used to it,” Limberiou said. “They still are able to take away so much from it, because the people who are putting into it give so much.”

She gave the example of high school students who presented a virtual Junior Achievement program for the benefit of Ave Maria Academy.

“You could tell they prepared so much for it, and they were willing to share and they were excited about it,” she said. “And I think the kids were able to feel it on this side of the camera and were able to interact just the same way.”

Other activities included a multi-campus pen pal program, lip-sync contests, and Popcorn and Comfy Clothes Day. Also, the school launched an initiative within the Olweus Bullying Prevention Program, which originated in Norway more than three decades ago and continues to promote good peer relations and promote a positive educational climate.

At Ave Maria, each student received a T-shirt courtesy of the Parent-Teacher Guild, and they will wear it on the same day once a month to remind each other about the school’s kindness expectations

Since the start of the academic year, the school has been able to offer in-person education on a consistent basis and in a safe manner during the pandemic.

“I think that things are going much better than I ever would have expected. We’re in person, and a lot of schools can’t say that. So it truly is a blessing. I feel like we’re being watched over for that reason,” Limberiou said “I’m just happy to be here every single day, with the kids every single day. They need it so much.”