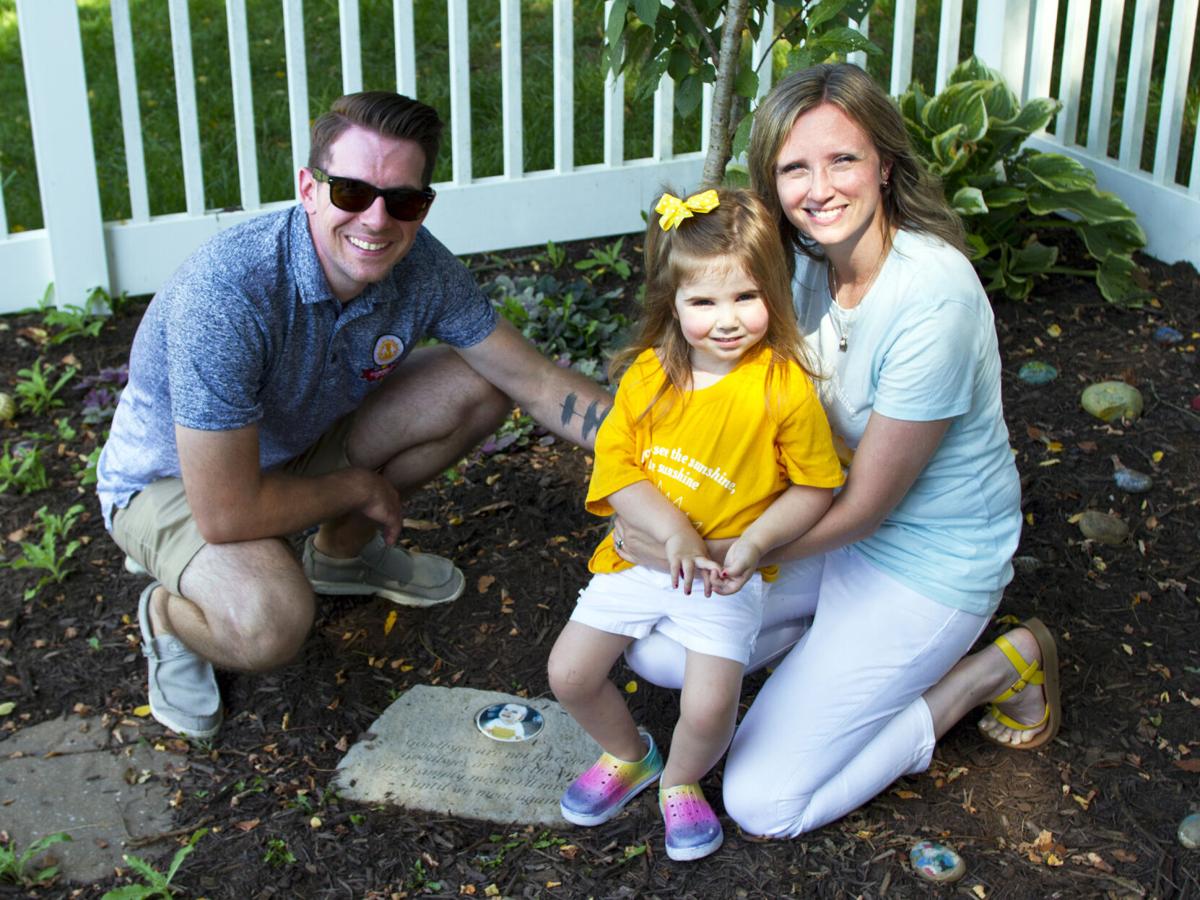 Ryan and Stephanie Pauley, with daughter Eliana, established a garden at their Bethel Park home in memory of Scarlett. 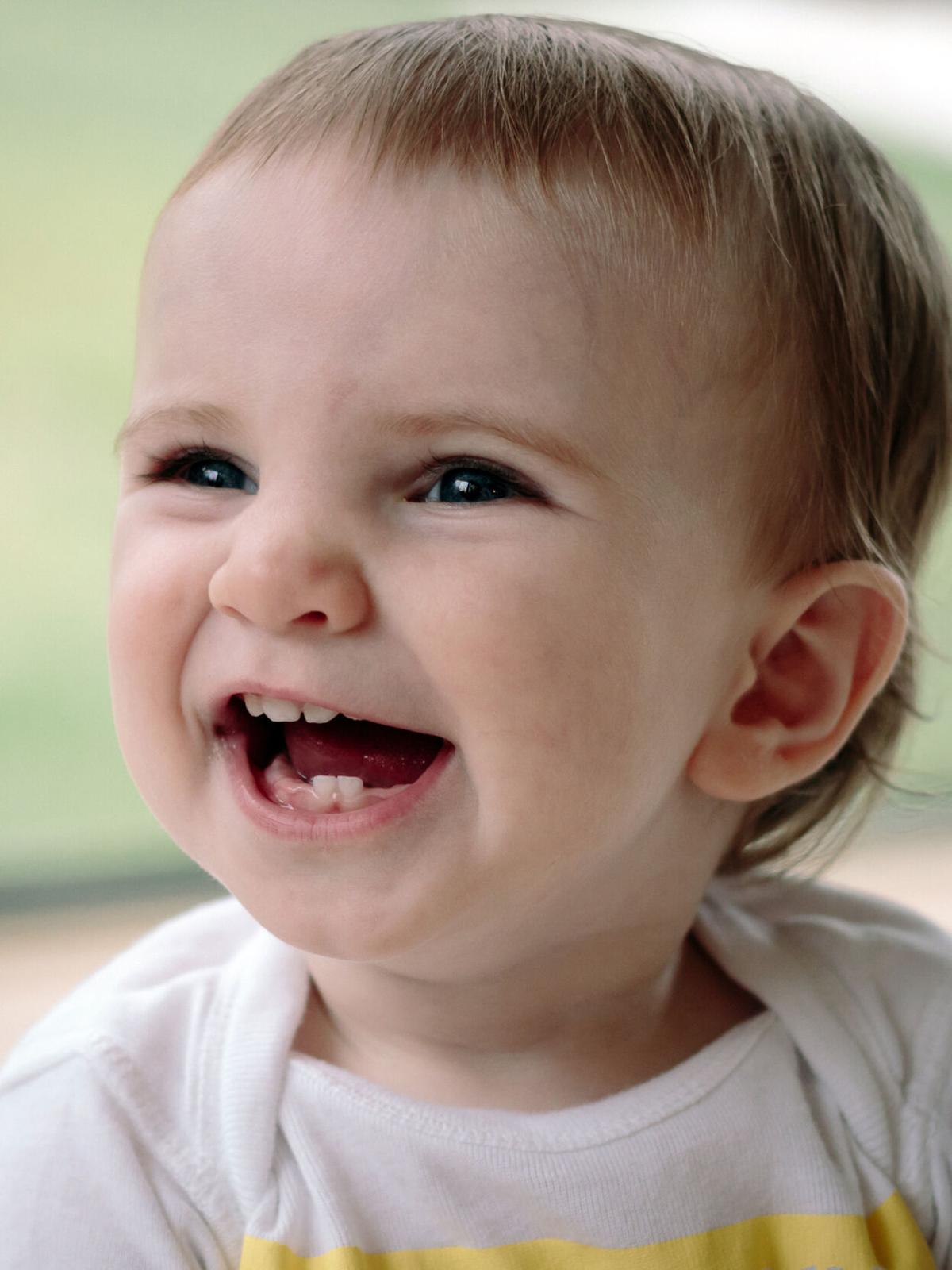 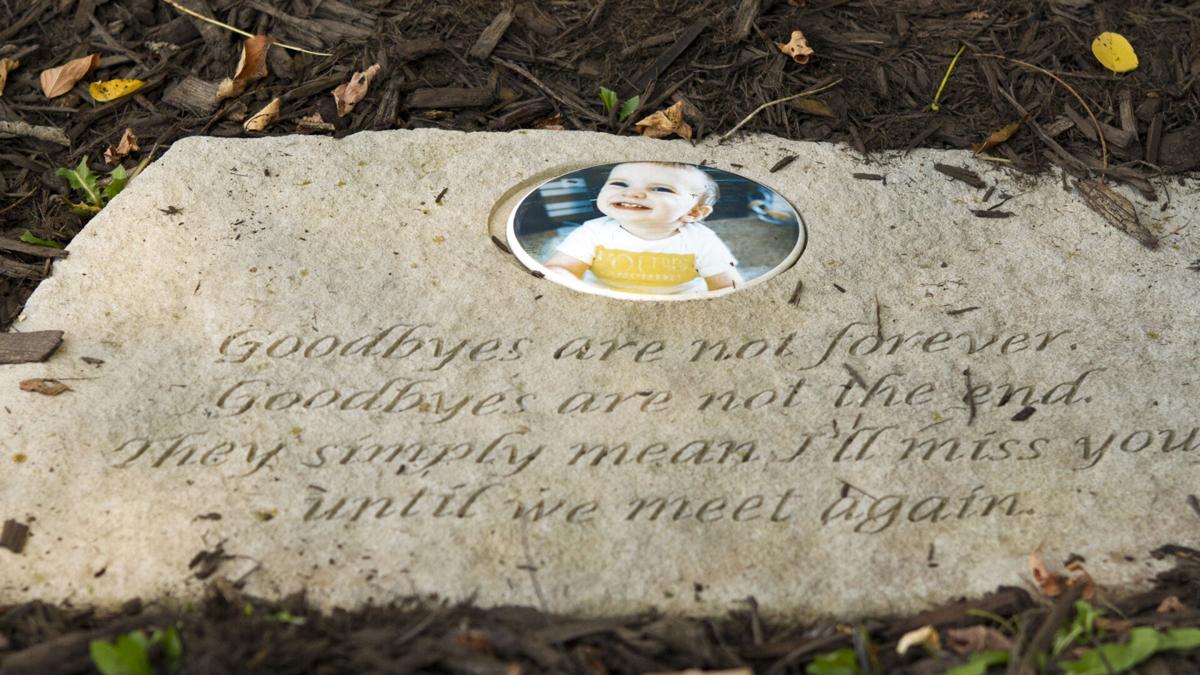 A feature of the garden dedicated to Scarlett Lillian Pauley 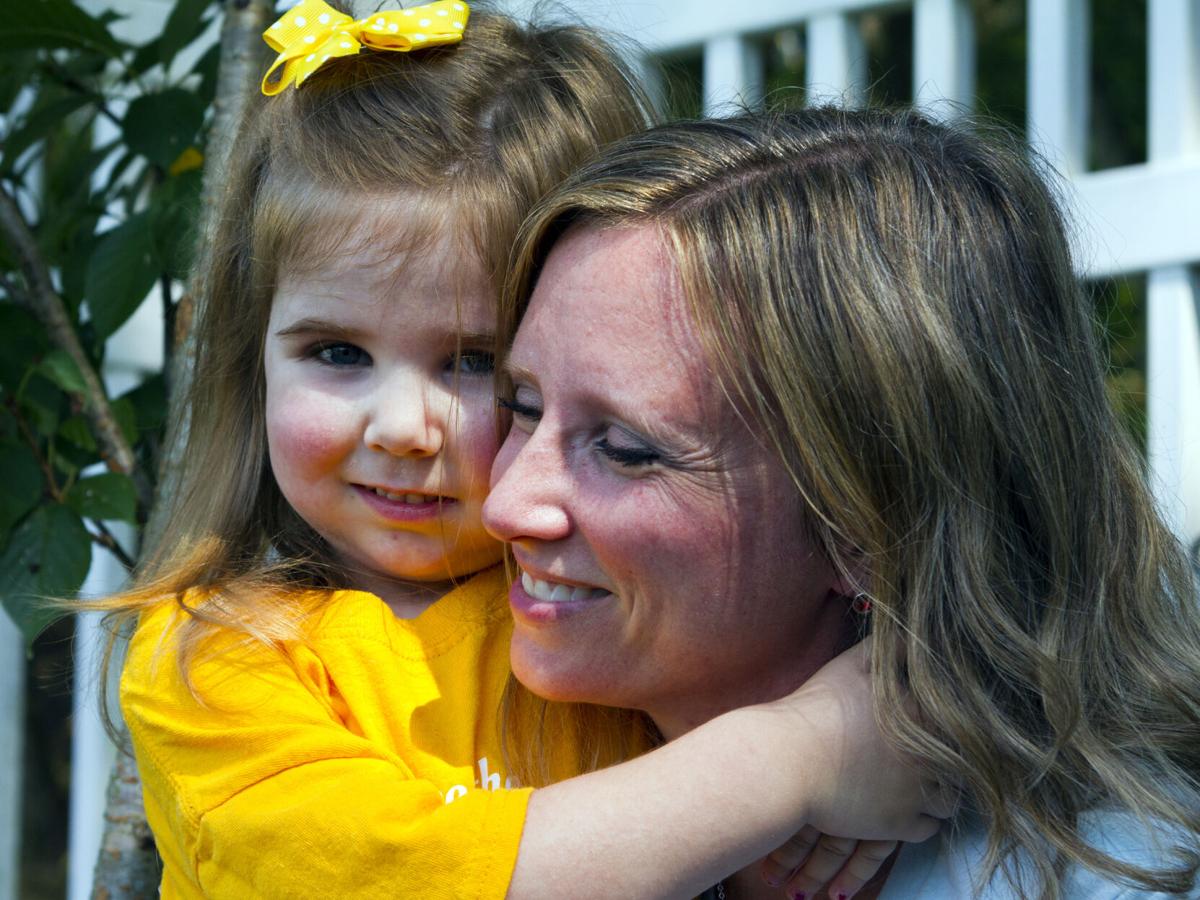 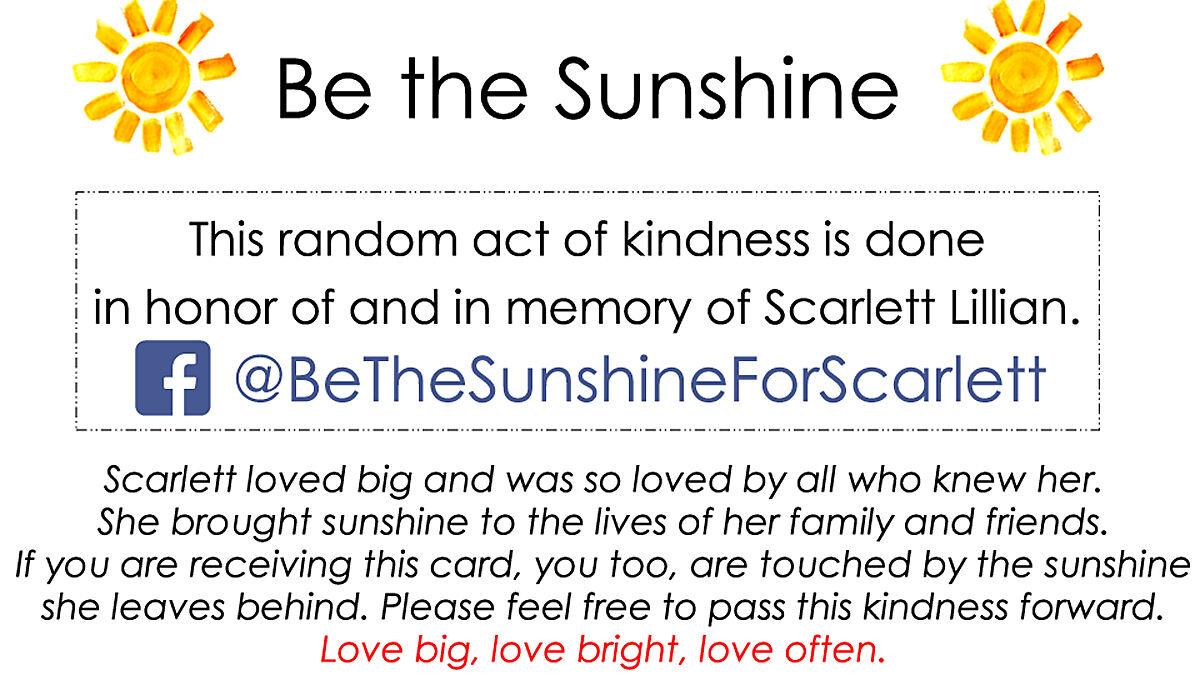 Be the Sunshine cards, designed by Laura Losi, are available for download and printing at www.facebook.com/bethesunshineforscarlett. 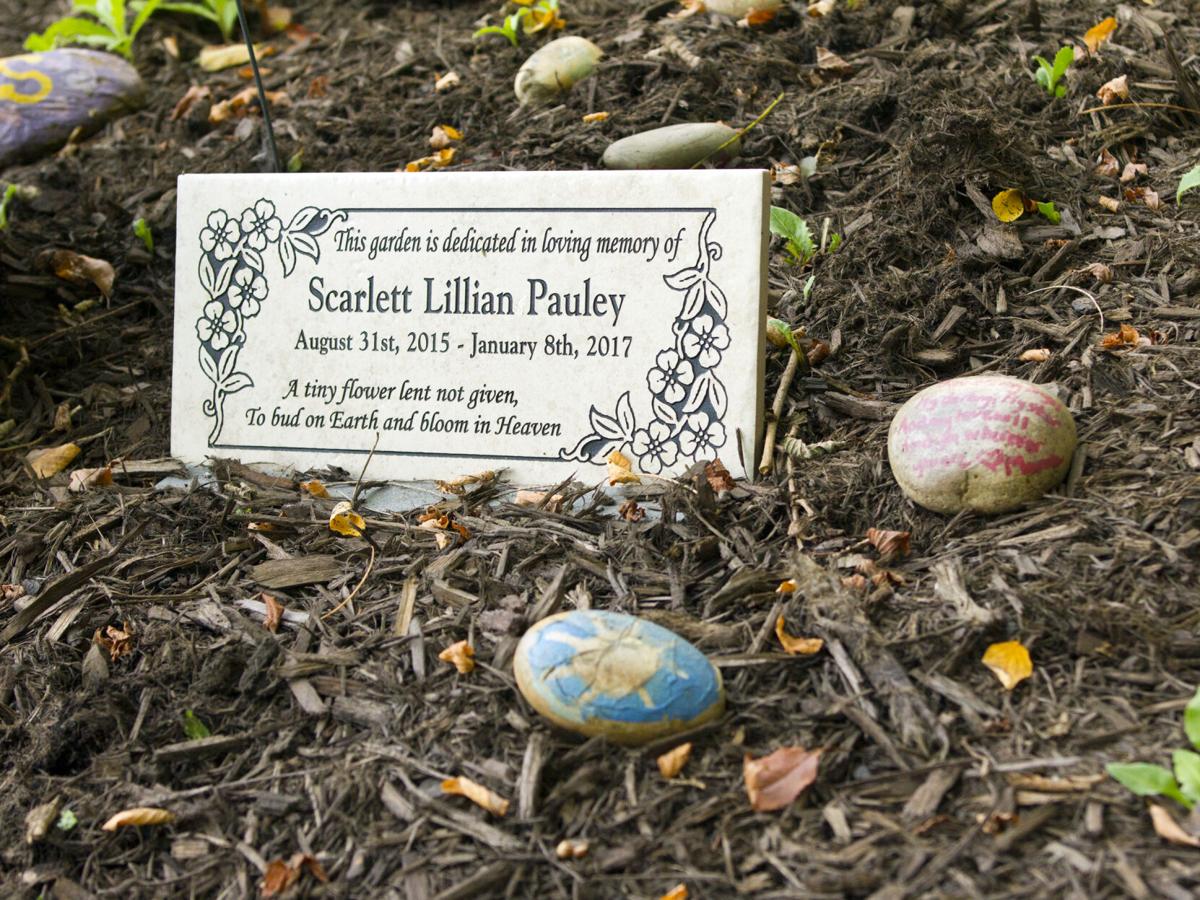 Never to be forgotten

No matter what the weather holds for Aug. 31, it’s possible to help make it an effectively sunny day.

Specifically, anyone can join the Be the Sunshine for Scarlett Community by performing a random act of kindness or two, putting smiles on the faces of the folks they assist and especially of the Bethel Park couple who started the effort in memory of their daughter.

Ryan and Stephanie Pauley encourage those who are either givers or recipients to share their experiences at www.facebook.com/bethesunshineforscarlett, where Sunshine cards to hand out are available to download and print.

“We love hearing about it, because it really does get us through the tough days,” Stephanie said.

Although the Pauleys enjoy hearing about acts of kindness every day, those performed Aug. 31 hold a special place for them.

To honor her, Ryan and Stephanie formed the nonprofit Scarlett Lillian Pauley Foundation, which promotes awareness about what is known as Sudden Unexplained Death in Childhood, and helps finance researches into its causes and supports families who go through what they had to endure.

“We can’t care for Scarlett physically, the way we want to,” Stephanie said. “But we knew immediately that we wanted to care for her memory.”

Her favorite song was “You Are My Sunshine,” and so her parents decided to draw on that for the name of their kindness campaign.

“Actually, in that very first Facebook post that I made sharing that Scarlett had passed away, I didn’t even think much about it, but I asked people to perform a random act of kindness in Scarlett’s memory,” Stephanie recalled. “And that’s how the Sunshine cards were born.”

“It started out, of course, locally. But as it started to grow, we had some people in other countries passing them out,” Ryan said.

Sure to be helping her parents pass them out is Eliana, the couple’s exceedingly photogenic 3-year-old second daughter.

“She knows her sissy,” Stephanie said. “She knows sissy lives in our heart and that sissy is in Heaven with God, and with her grandfather and her great-grandfather. And our cat: She tells people, ‘sissy’s in heaven with Colby.’”

“The first time it happened, thank God, we were at her pediatrician’s office. We were waiting for her doctor to come in, just for a normal checkup,” her father recalled. “What they tell you is, it’s normal. It happens very often, and there’s no concern.”

In fact, a few members of his family had similar occurrences.

So Stephanie and Ryan didn’t worry too much, nor did they when Scarlett came down with the sniffles a few months later, after returning to preschool at the start of 2017.

“It’s not even fair to say she had a fever, because she didn’t have a fever: 99.7. I will remember that for the rest of my life, that number. That was her temperature,” Stephanie said. “We gave her a bath. We read books. We put her to sleep and went about our evening.”

A bedroom check later revealed that she had stopped breathing, and she was taken to St. Clair Hospital.

“We weren’t at the hospital for very long before they brought us in and told us they had tried, but, there was nothing that they could do,” Stephanie recalled, pausing to dry tears with tissue paper. “We had no idea what happened to her.”

They still do not.

An autopsy by the Allegheny County Medical Examiner’s Office failed to provide an answer. Testing by the Registry and Research Collaborative of the SUDC Foundation, the national Sudden Unexplained Death in Childhood advocacy nonprofit, produced the same lack of a resolution.

“With what medical knowledge is able to give us at this point, we have done everything we can to find out what happened to Scarlett. But we have not given up that we will be able to find out,” Stephanie said.

Because the SUDC Foundation receives no public funding, the Pauleys want to provide financial support toward applicable research.

“We would not have gotten through a lot of the things we had to get through without that organization and their support of us,” Ryan said. “They’re completely a lifeline.”

After Eliana Pauley was born, she spent the first month of her life in a neonatal intensive care unit.

“She ultimately was diagnosed with sleep apnea, which, I’ll admit, was a real kick in the teeth after having a daughter who passed away in her sleep,” Stephanie said. “When something like Scarlett’s death happens to a family, sometimes people are quick to say that, oh, it’s so rare. It’ll never happen again. But when it happens to you, you find no comfort in statistics.”

Going on 4 years old, Eliana accompanies her parents to events where they share information about the foundation named after her sister, and she always is ready to flash the cutest of smiles for photographers.

“You can see it. She’s doing great,” Ryan said.

Because of her past issues, she does wear a pulse oximeter to bed.

“We know what her heart rate is. We know what her oxygen level is. And that is so incredibly comforting to us,” her father said. “I don’t know how we would have made it putting her to sleep without that.”

Stephanie and Ryan continued Scarlett’s sunshine theme with Eliana: Her name means “daughter of the sun” in Greek and “He has answered” in Hebrew.

“We believe that Scarlett hand-picked the most incredible little soul up in heaven and sent her to us in Eliana,” Stephanie said.

Like her sister, Eliana enjoys being read to, but the Pauleys haven’t yet been able to share with her Scarlett’s favorite book, “Barnyard Dance.”

But Shannon Pauley, Ryan’s sister-in-law, is head of the youth services department at Peters Township Public Library and came up with a way to help make the book extra special for the family.

“After Scarlett passed, she reached out to Sandra Boynton, the author, and let her know about Scarlett,” Stephanie said. “And Sandra Boynton actually redesigned the cover of ‘Barnyard Dance’ to say, ‘Everyone dance for the glory of Scarlett Lillian.’”

Stephanie recalled how Ryan would accompany her reading by doing his own version of barnyard dances, and she once used her cellphone to record the bedtime routine.

“She’s on my lap and I’m videoing it. So you can’t see Ryan, unfortunately, but you can see Scarlett. And you can see her reacting to Ryan doing this dance,” Stephanie said. “It’s one of our most treasured possessions.”

Although the act bears her daughter’s name, Stephanie Pauley attributes much of that to her at one time having worked for Sen. Bob Casey, who introduced the legislation along with a bipartisan group of lawmakers in the U.S. Senate and House of Representatives.

Whatever the case, the law strengthens efforts toward a better understanding of sudden deaths among children.

“There is no standardization in terms of a death investigation,” Stephanie said. “Especially in the cases of SUDC, in order to get good research, you need good data. And you can’t get good data if you’re not collecting it the same way. In some ways, you’re kind of comparing apples with oranges.”

Scarlett’s Sunshine Act also establishes a grant program for states to engage in activities to address Sudden Unexplained Death in Childhood, the category of death in children ages 1 to 18, and Sudden Unexpected Infant Death, for those younger than 1.

And part of the effort seeks to provide support for grieving families, which in Stephanie’s view is essential.

“We had no idea this could happen. Once we lost Scarlett, we thought we were the only people on the face of the planet who were unlucky enough to have something like this happen to them,” Stephanie recalled.

“Then we learned that we weren’t alone,” she added. “When you’re hurting and you’re grieving, alone is never a good place to be. It just magnifies that feeling.”

Regarding their perseverance, she and her Ryan frequently are told, “I don’t know how you do it.”

But really, we weren’t given a choice,” Stephanie said. “There was no alternative for us, other than just trying to find a way to do some good for Scarlett.”

Along the way, they are providing education about a category of death that occurs for one out of every approximately 100,000 children.

“We want everyone to know that this happens,” Stephanie said. “And we want if, heaven forbid, this happens to another family, they know they are not alone and there is support for them.”