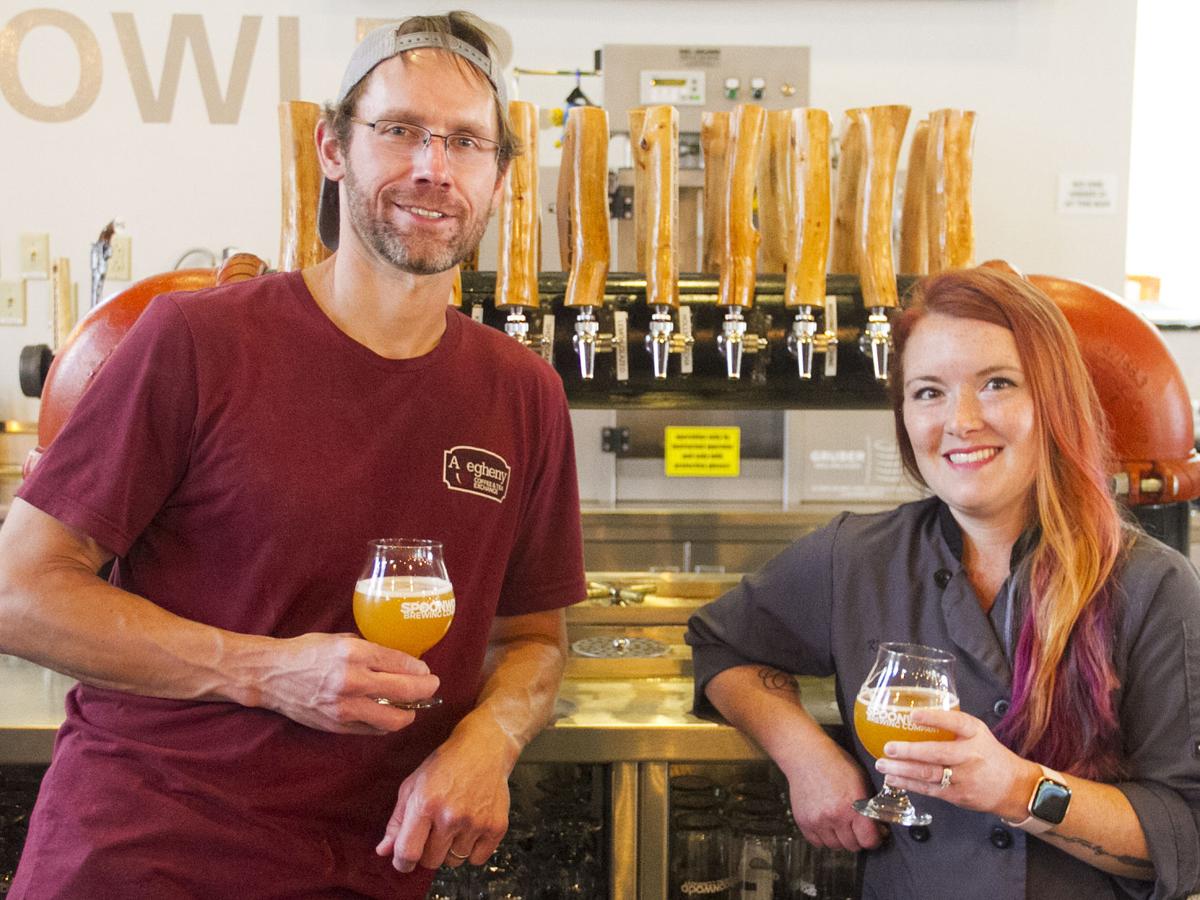 Steve Ilnicki and Kayla Milliron get ready to give Lemon Glazed Ale a try at Spoonwood Brewing Co. in Bethel Park. 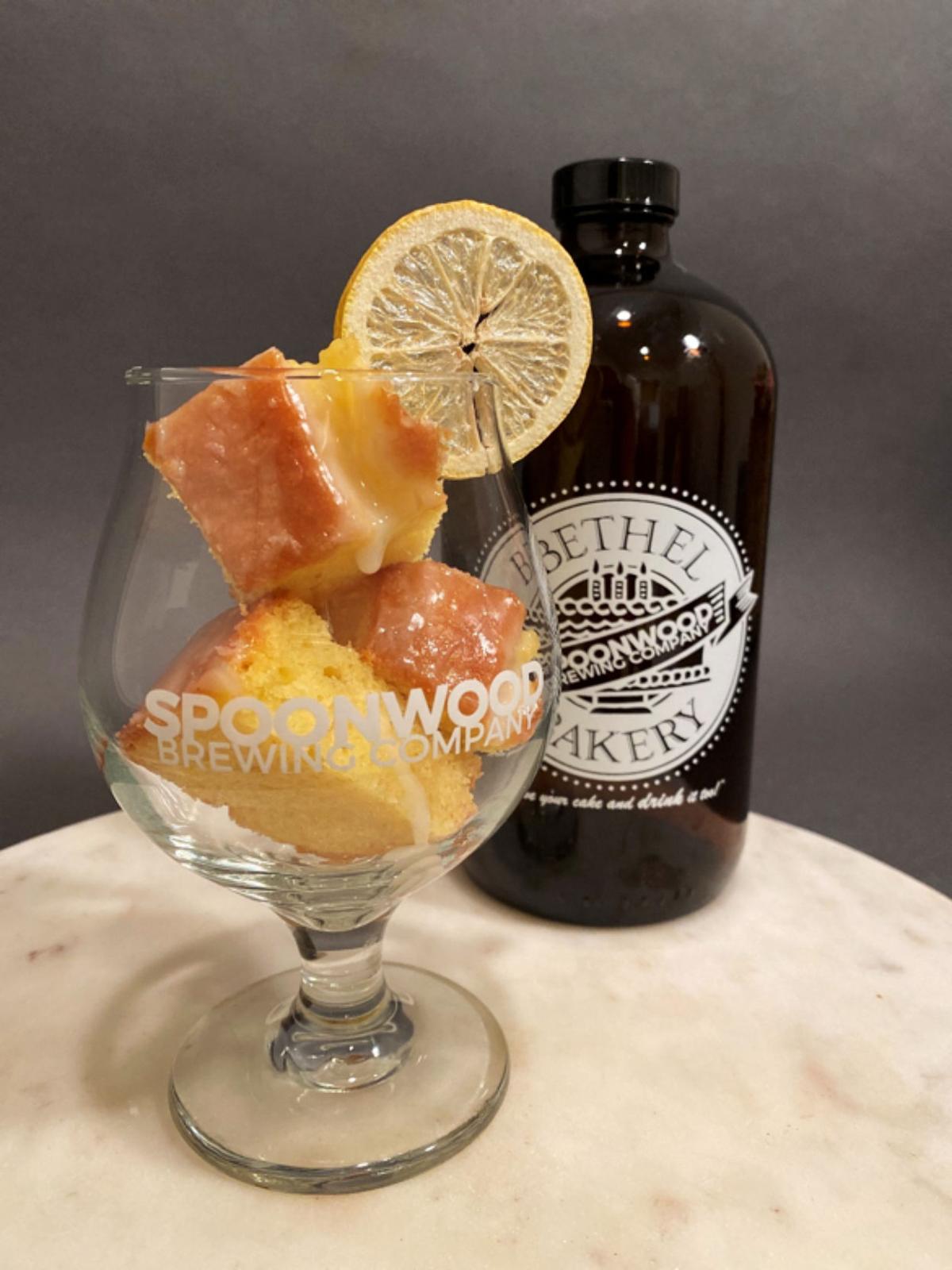 Even though Granddad may have balked at this kind of combination, beer aficionados are not.

You may remember Granddad enhancing the flavor of his beer with, say, tomato juice. Or perhaps it was something a mite stronger.

Odds are that he never, ever would consider adding anything from the bakery to the blend.

That was then. This is now. And a collaborative effort between two Bethel Park businesses has put a distinctively delicious spin on the taste of beer.

As June wound to a close, Bethel Bakery and Spoonwood Brewing Co. joined together to present Lemon Glazed, a crème ale brewed using the bakery’s yellow cake and lemon puree among the ingredients. The beer’s release marks the fourth such product by the partnership, starting last year with Retort Chocolate Raspberry Cake Stout, and followed by Pumpkin Drop Porter and Donut Ale.

“I think that the pastry flavors are really great jumping-off points for a beer,” Spoonwood brewer and part owner Steve Ilnicki said.

“Pastry beers, themselves, are actually like a bona fide subcategory these days,” he said. “People are doing things that are inspired by the flavors, if not putting the ingredients into the beer, which we’ve been doing. Every one of them has involved some version of a pastry or a cake that we put either into the kettle or into the mash tun.”

For the uninitiated regarding the brewing process’ particulars – that includes many folks who are eminently familiar with end product – the step of mashing involves combining a mixture of milled grains with hot water in a vessel known as a tun, and letting it soak. The resulting liquid is called the wort, and that subsequently is boiled with hops in a brew kettle.

By whatever method it’s accomplished, beer with baked goods has proved to be popular at Spoonwood.

Kayla Milliron, Bethel Bakery’s pastry chef, recalled some folks walking into the brewery just in time for a new release, saying: “We’ve been waiting for this all week.”

“People get really excited about it,” she added, “before they even know what it tastes like.”

The impetus for the collaboration began with John Walsh, who co-owns the bakery with his wife, Chris, whose father, Morris, founded the business in 1955. Along with its longtime Bethel Park location on Brightwood Road, the business has a store on Route 19 in North Strabane Township.

“John had said he wanted to focus on local, versus doing something with Pittsburgh in general,” Milliron said. “So I thought, well, why not Spoonwood?”

That certainly resonated with the folks at the brewery.

“We were thrilled right from the get-go to do something together,” according to Ilnicki.

Starting as a home brewer, Ilnicki has been making beer professionally for almost a decade, and he has been at Spoonwood since it opened in early 2015. From the outset, the bar and restaurant on Baptist Road had been offering a variety of styles and flavors.

The Bethel Bakery partnership has steered the selections in new directions.

“If nothing else,” Ilnicki said, “we definitely never put cake or anything else like that into a beer.”

Nor, of course, did Granddad.