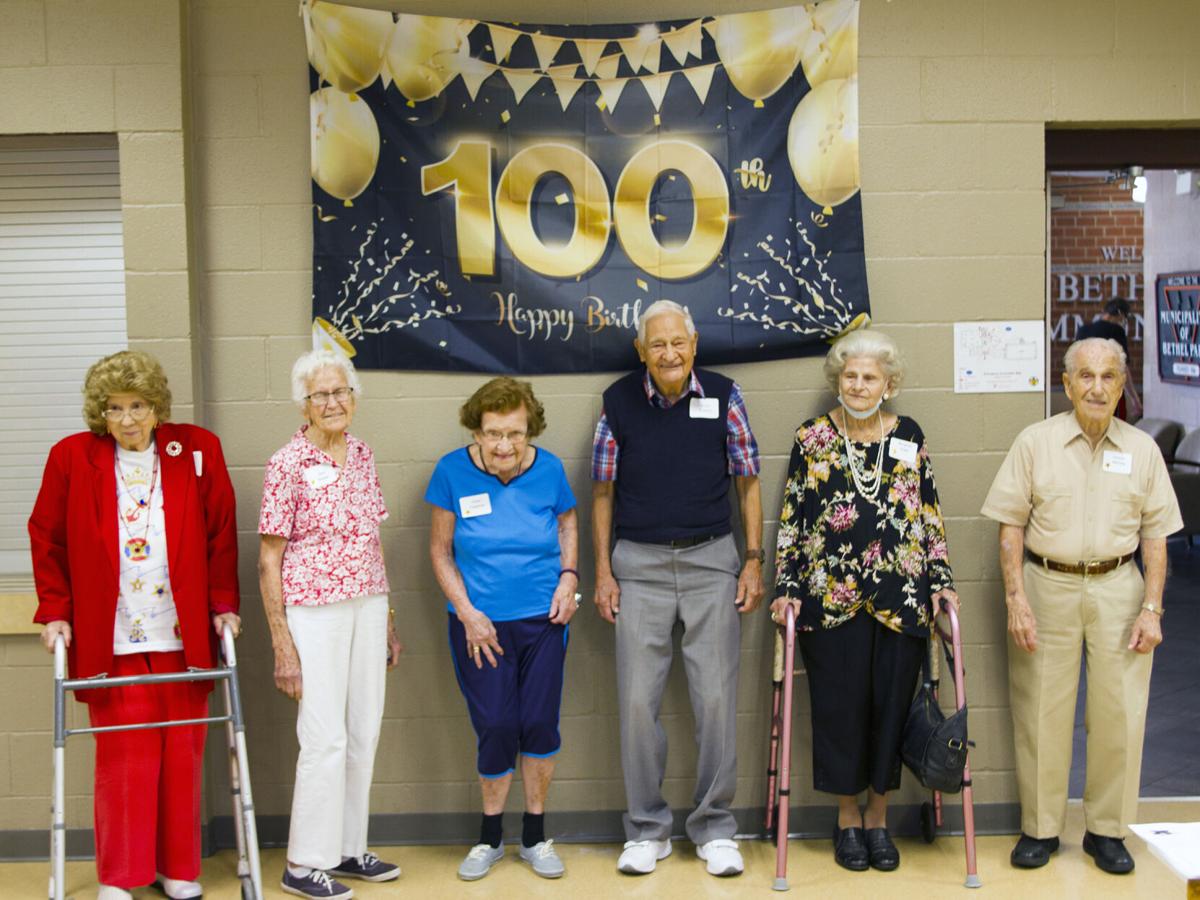 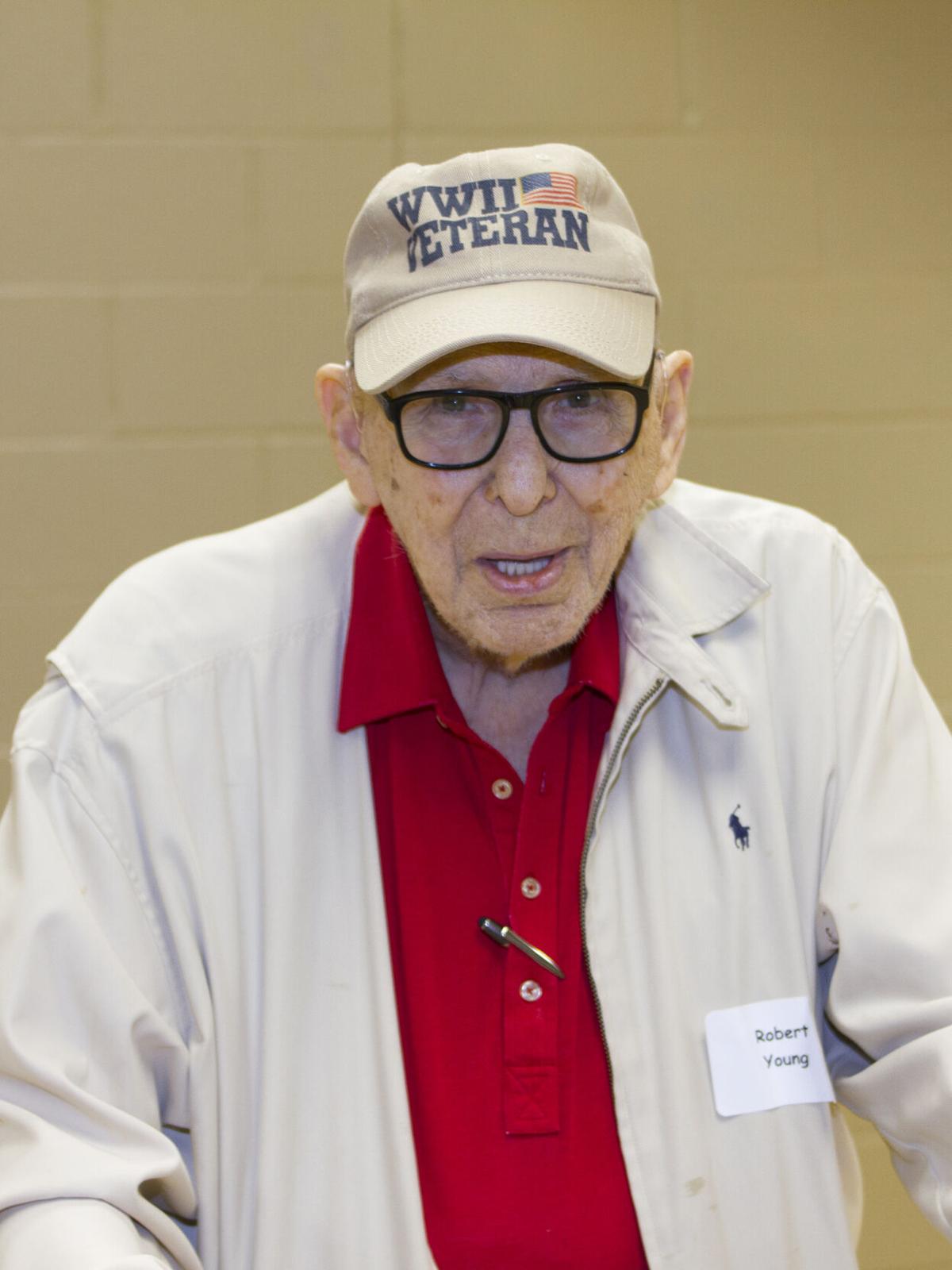 Robert Young served with the U.S. Navy in the Pacific Theater during World War II. 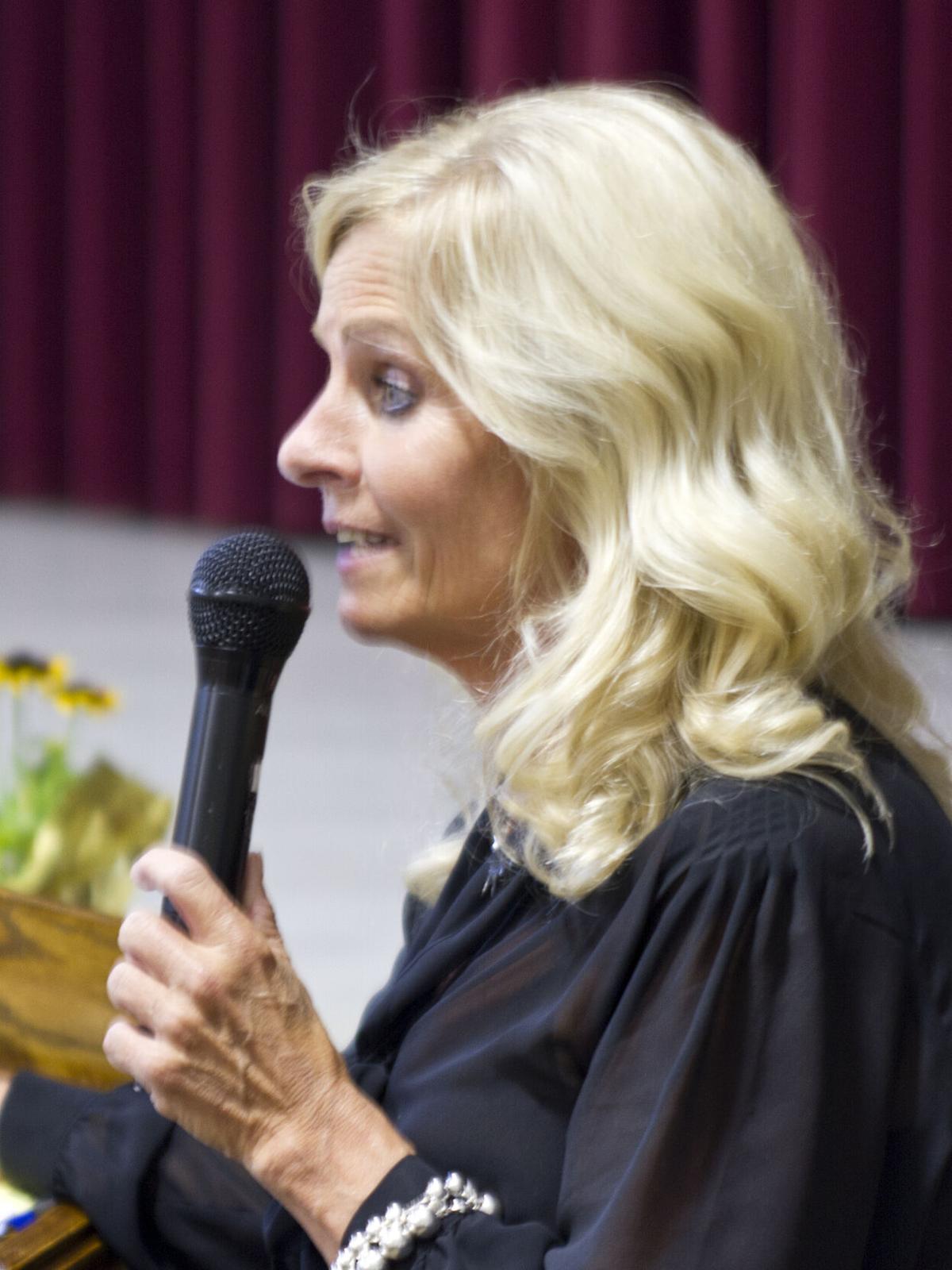 Judy Vieceli advises those at the luncheon to be wary of scams. 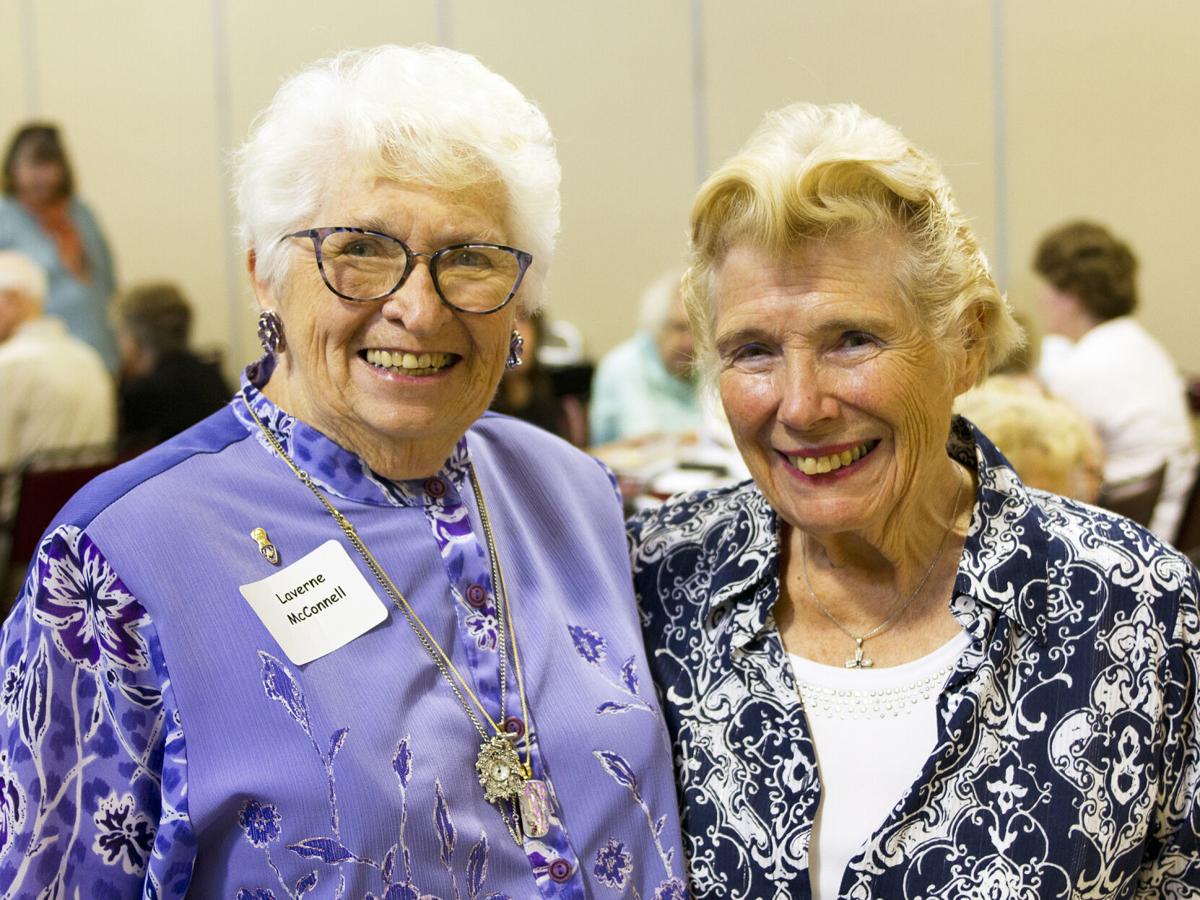 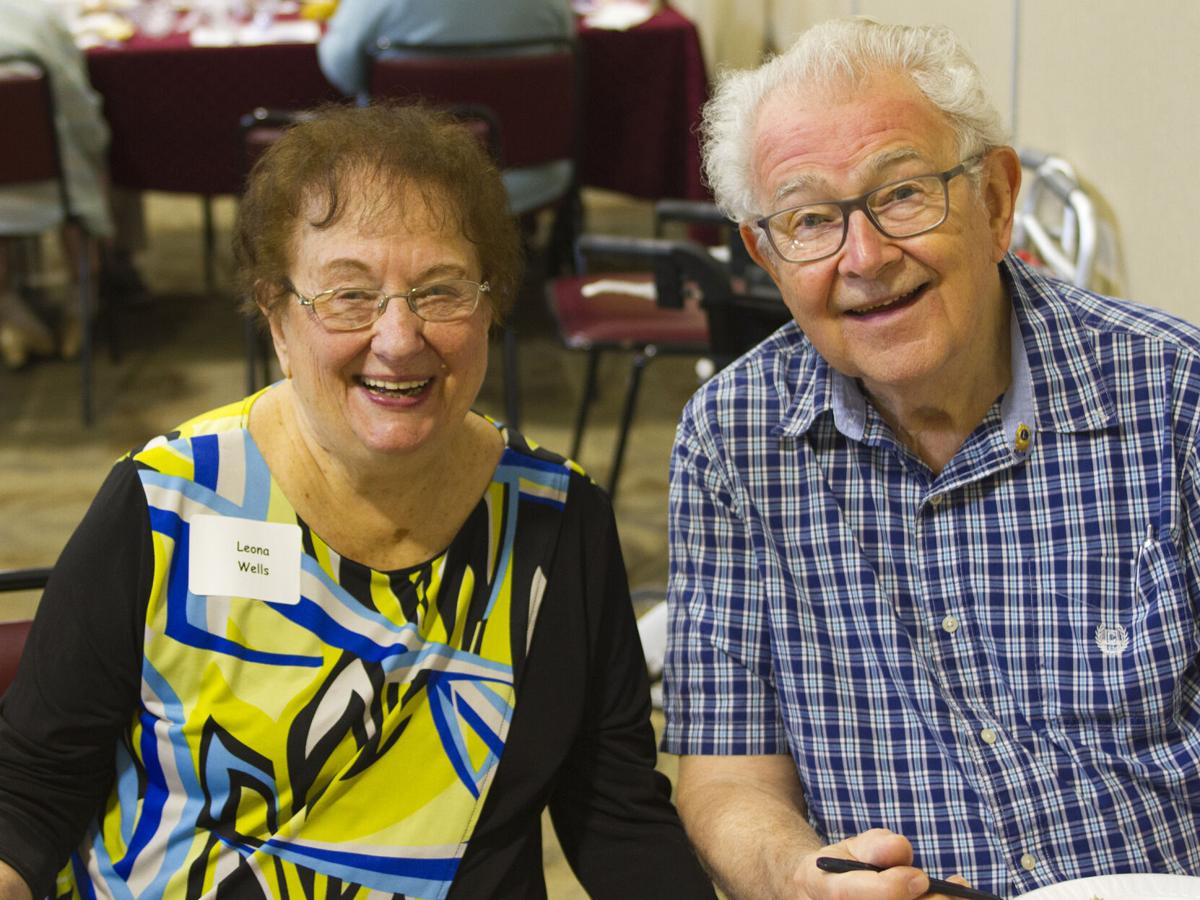 Attending the luncheon are Leona Wells and her husband, Jay, who represented the 40th District in the Pennsylvania House of Representatives from 1971-74.

Herman Skerlong, who turned 101 on July 26, attributes his longevity to luck.

Attending the luncheon are Leona Wells and her husband, Jay, who represented the 40th District in the Pennsylvania House of Representatives from 1971-74.

Herman Skerlong, who turned 101 on July 26, attributes his longevity to luck.

For 17 years, Bethel Park has hosted a 90-Plus Club luncheon to celebrate the lives of residents who have reached a certain age.

“We’re going to make it a Hundred-Plus next year,” joked Mayor Jack Allen, who served as the event’s sponsor and master of ceremonies.

Allen opened the proceedings by introducing half a dozen guests who were born in 1921 or before, including Margaret Kappa, Violet Cumpston and Jean Benson, all of whom are 103, and Herman Skerlong, who is 101.

Pete Edwards turned 100 Jan. 2, and as of the Oct. 8 luncheon, Lorraine Stokes was ready to become a centenarian eight days later.

The 90-Plus tradition was started by former Mayor Cliff Morton, along with his wife, Joan, and Lorraine McConnell. Both of the women joined this year’s festivities at Bethel Park Community Center.

Prior to a lunch of stuffed turkey with all the trimmings catered by Ma and Pop’s Country Kitchen, guest speakers Gary Allen and Dorothy Vandruff provided information about Allegheny County’s Lifespan program and Bethel-St. Clair Meals On Wheels, respectively.

And at the invitation of the mayor, Judy Vieceli of First National Bank told a cautionary story about an attempted scam involving a Bethel Park senior citizen who wanted to withdraw $30,000 in cash.

“I’m kind of nebby, so I needed to know why he needed it,” Vieceli said. “He proceeded to not tell me, and then he said his lawyer told him not to tell anybody what he was doing.

“That’s a red flag right there,” she added. “Nobody in the professional world would ever tell you not to tell somebody something.”

Eventually, she learned he had received a call from someone claiming the gentleman’s grandson was in jail, and a young man purporting to be the grandchild got on the call.

“All he heard was a male voice. It wasn’t his grandson,” Vieceli said. “Unfortunately, they target seniors, because grandchildren are everything to us.”

She then contacted Bethel Park police.

“I was so impressed with how they handled it,” she said. “They were so good with this gentleman. They came in. They talked to him. He, at 80-some years old, set up the sting for them. That was so brave.”

Vieceli advised those attending the luncheon to be extremely wary of similar calls.

“Get off the phone,” she said. “Call your daughter. Call your son, and make sure the kids are OK.”

On a brighter note, Gary Allen, Bethel Park site coordinator for Lifespan, described numerous activities and programs that are offered, from exercise classes for all levels of physical ability to cooking classes, crafts and card playing.

Regarding Bethel-St. Clair Meals On Wheels, manager Vandruff said the service has been based at Bethel Presbyterian Church for 50 years, and she has been cooking during 38 of them.

Volunteers deliver hot meals and lunches on weekdays, “and some goodies on Friday, because we get things donated,” she said.

A small donation is requested.

“If you cannot afford it, do not hesitate to call, anyway,” Vandruff said. “The community of Bethel Park is very good to their organizations.”

That includes Meals On Wheels, which donated treat bags for the 90-Plus Club luncheon. Other donors were Bethel Bakery and Dairy Queen with desserts, Shrubs-N-Stuf with flowers and UPMC with hand sanitizer.

For more information about Lifespan, visit www.lifespanpa.org/social-services/senior-community-resource-centers/bethel-park or call 412-831-7111. More about Bethel-St. Clair Meals On Wheels is available at bethelparkmealsonwheels.com or by calling 412-835-1039.