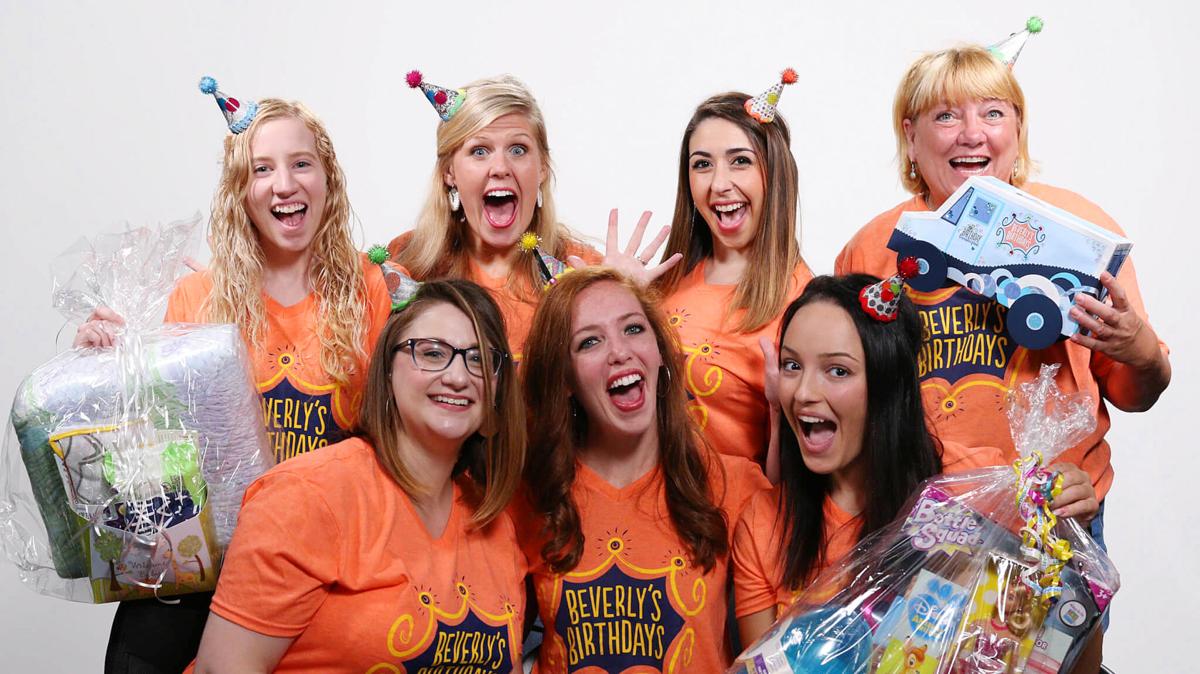 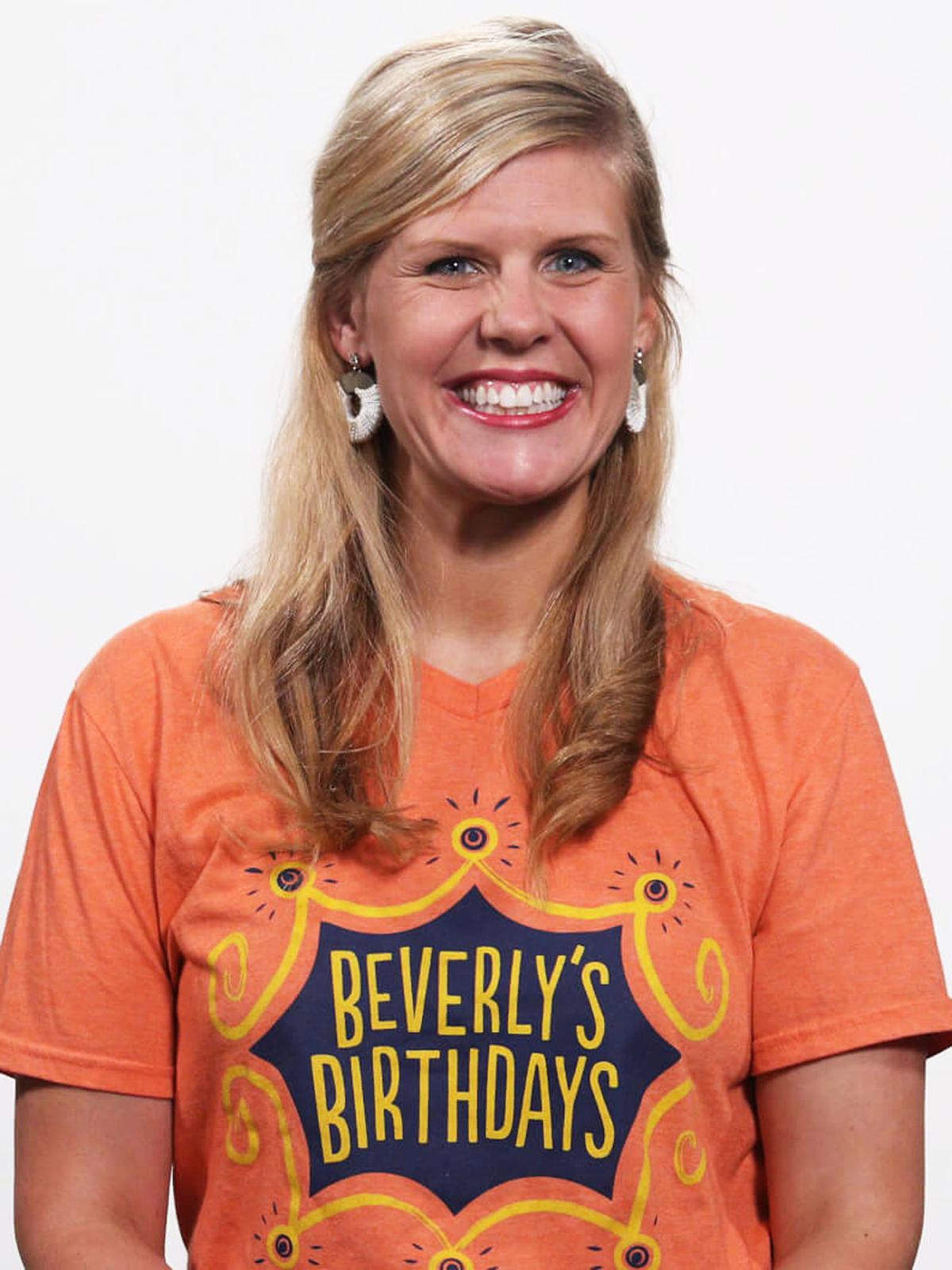 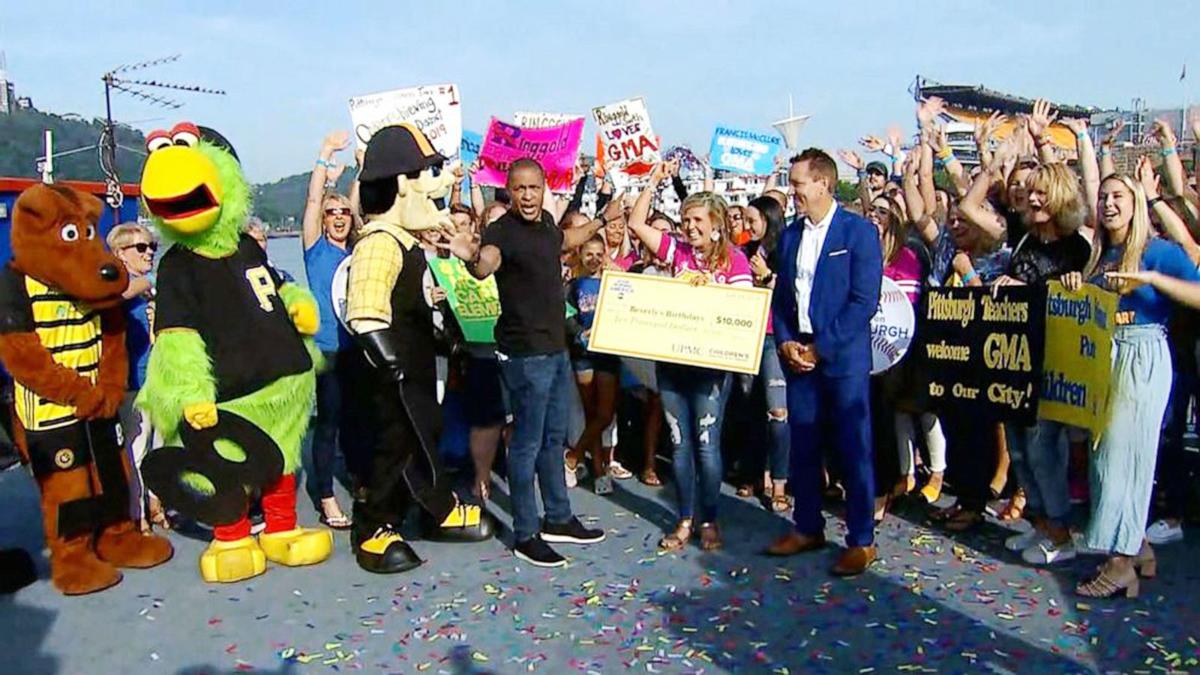 Megs Yunn receives a donation on behalf of Beverly’s Birthdays during her June 25 appearance on ABC-TV’s “Good Morning America.”

Fans of “The Honeymooners” will recall the episode in which Ralph appears on television as the Chef of the Future and promptly is dumbstruck.

Megs Yunn’s recent “Good Morning America” appearance pretty much was the opposite.

“It was cool,” the Bethel Park native said. “I was a speech major in college, so there’s a level of me that likes public speaking.”

And so a national audience learned about Beverly’s Birthdays, the nonprofit she founded in 2012 to provide parties for children who otherwise would not have the opportunity to blow out candles on a cake.

“They found me,” she said about staff members for “Good Morning America,” which averages more than 4 million viewers per episode. “They knew they were going to be in Pittsburgh, and they wanted some possible charities that could benefit. Thankfully, Beverly’s Birthdays has had a lot of positive press, and so when they researched us, they were happy with what they saw.”

The donation adds to fundraising that has brought in $3.3 million toward providing birthday celebrations for more than 25,000 Southwestern Pennsylvania youngsters each year. Her organization now has a staff of 10, works with 68 social service agencies and 88 schools, and provides programs to all five regional Allegheny County Children, Youth and Families Partnership offices.

This month, Beverly’s Birthdays launched the Birthday Boutique, a “mobile fashion truck” that travels to parties.

“We met a girl named Kayla who was 16 and shared with us that she had never even owned a dress before,” Yunn said. “For me, that is tragic, and we decided that we were going to get her the dresses that she needed for her birthday.”

Because of abuse, the teen was in a residential treatment facility at the time. A few months later, Yunn received a card from staff members who were working with the teen.

“It’s not lost on us that from the day she got those dresses, something inside of her shifted,” Yunn said the card read. “You gave her hope.”

And so the Beverly’s Birthdays folks are calling the Birthday Boutique “hope on a hanger,” providing needed clothing and something more.

“It’s enhancing the already really fun birthday party experience by helping them with some basic needs, but also allowing them to feel important,” Yunn said.

A 2002 graduate of Bethel Park High School, her sense of altruism extends as far back as she can remember.

“I’ve always had the heart for service. I was very involved in high school with student council and volunteering, and I then I was an AmeriCorps volunteer,” she said about the federally funded civil society program. “That was my first foray into really doing service full-time.”

The Beverly’s Birthdays foray started when she met the girl for whom the organization is named.

“When Beverly shared with me that she had never had a birthday party or her own slice of birthday cake, not only did it shock me, but in that moment I was really embarrassed that I had never even thought that a child might not have a birthday,” Yunn said. “It was just very much an ‘a-ha!’ moment that I said, I’m going to do something about this. And I did.”

In June 2011, she submitted her idea to the national “BE BIG in Your Community Contest” and was selected as a first-place winner from among more than 1,000 entries across the United States. She received a $2,500 award that helped her start Beverly’s Birthdays.

“It was after that first party that I turned to my husband and I said, ‘I love this. I think I want to quit my full-time job,’” she said.

“He has been my rock through all of this,” she said. “He really loves what I do and he’s proud of me, and so for me, this is a family organization helping families. He believed in me from day one.”

The result has been thousands of celebrations in the past seven years.

“Really, the heart of what we’re doing has never deviated. We are providing birthdays for families in need,” Yunn said. “And it’s not about the stuff, even though that’s a portion of it. We’re giving presents, but it’s about validating to these children and these families that we see you and that you matter.

“That is a very powerful sentiment,” she continued, “especially if you’re anyone dealing with something that’s difficult. And if that can give you a little bit of bright and a little bit of light to get you through to the next day, then that’s a gift that will keep on giving.”

Now a resident of North Huntingdon Township, Yunn encourages others to follow her lead in helping others.

“I think anyone can have a Beverly moment,” she said. “If you hear something or you see something that really kind of strikes you, and you think you can do something to have a positive influence on changing that, then do it.”