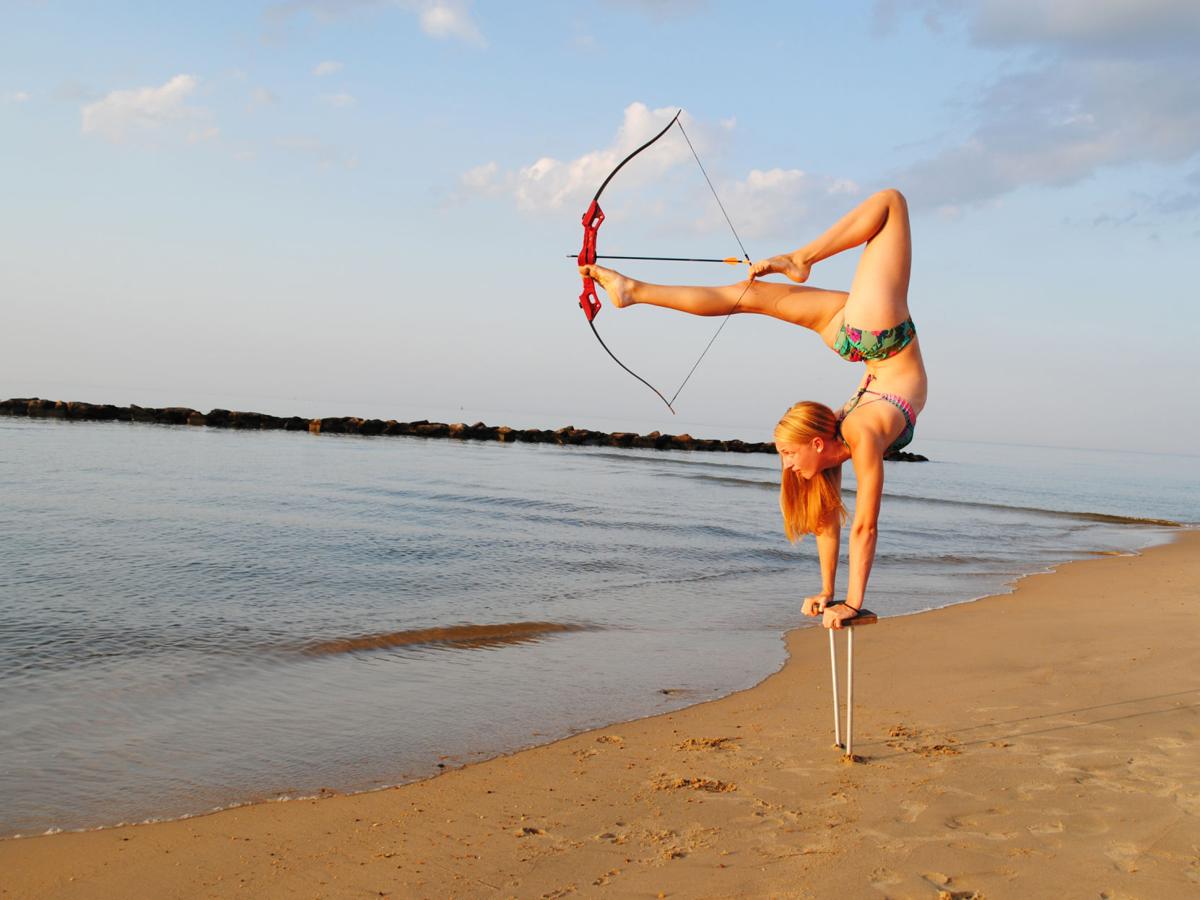 Abby Richert displays her form as a foot archer, one of the many skills she has developed in which she hopes will lead to a career in the circus. 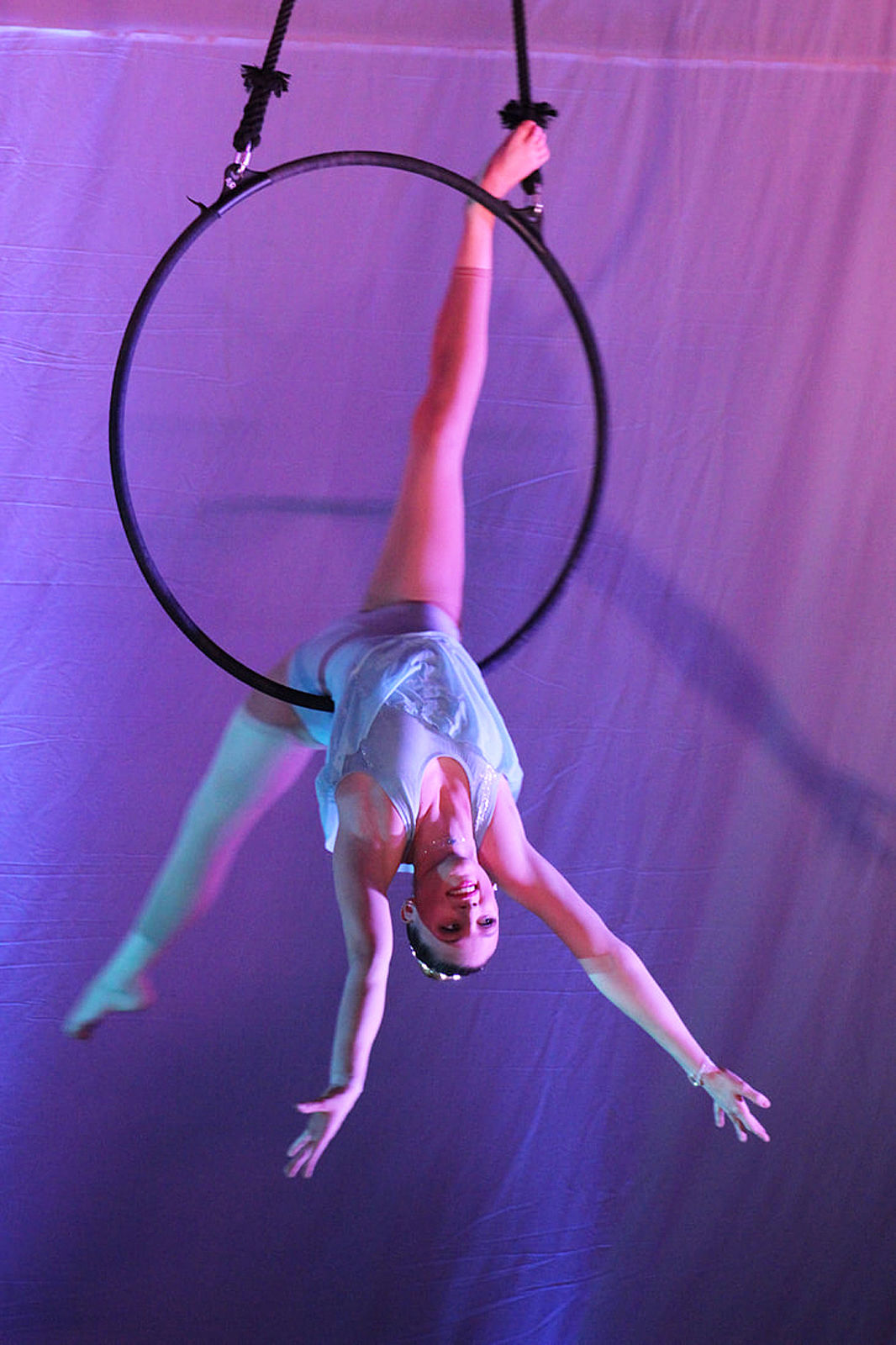 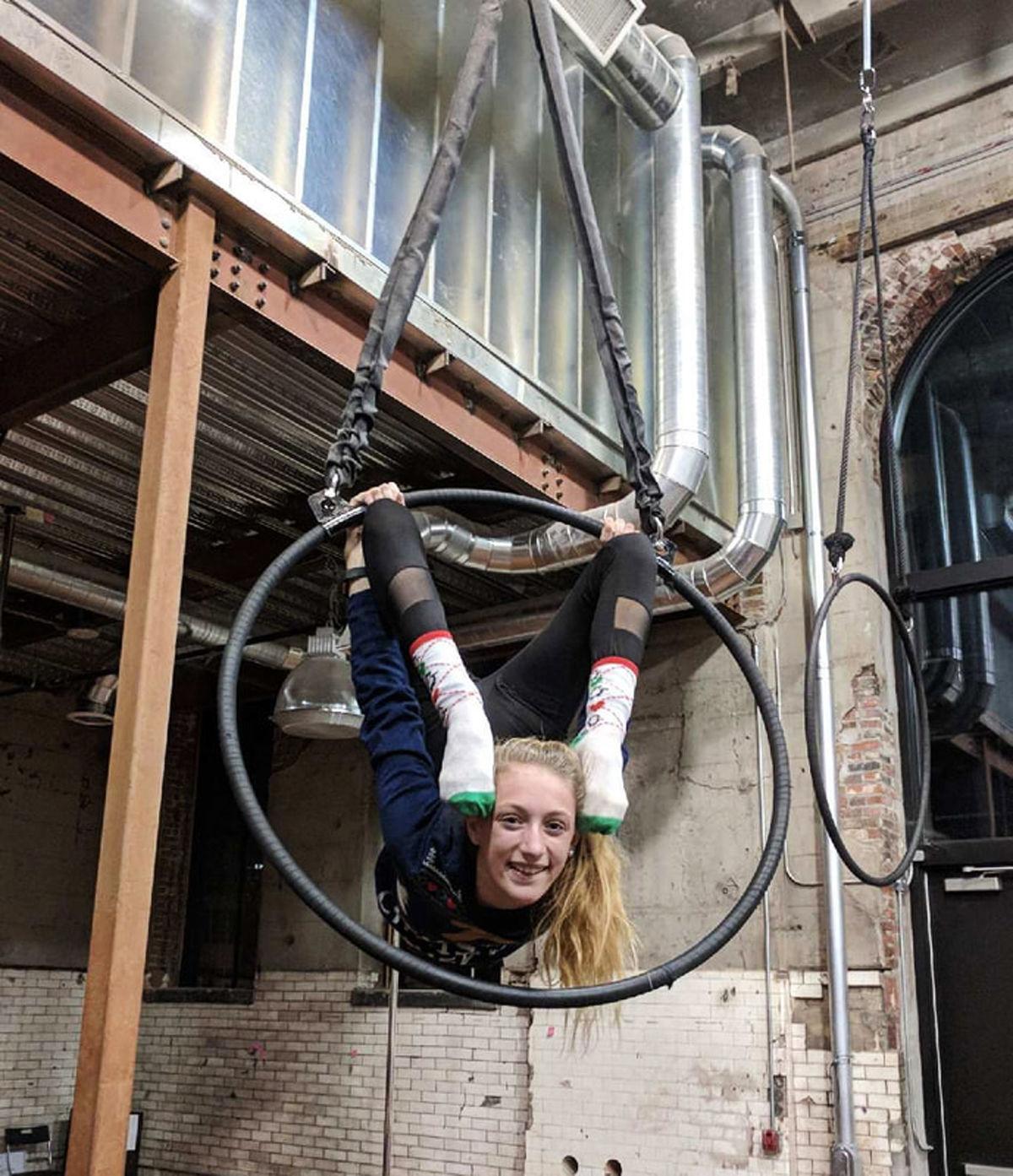 Prior to COVID-19, Abby Richert was training extensively at Iron City Circus Arts in the South Side. 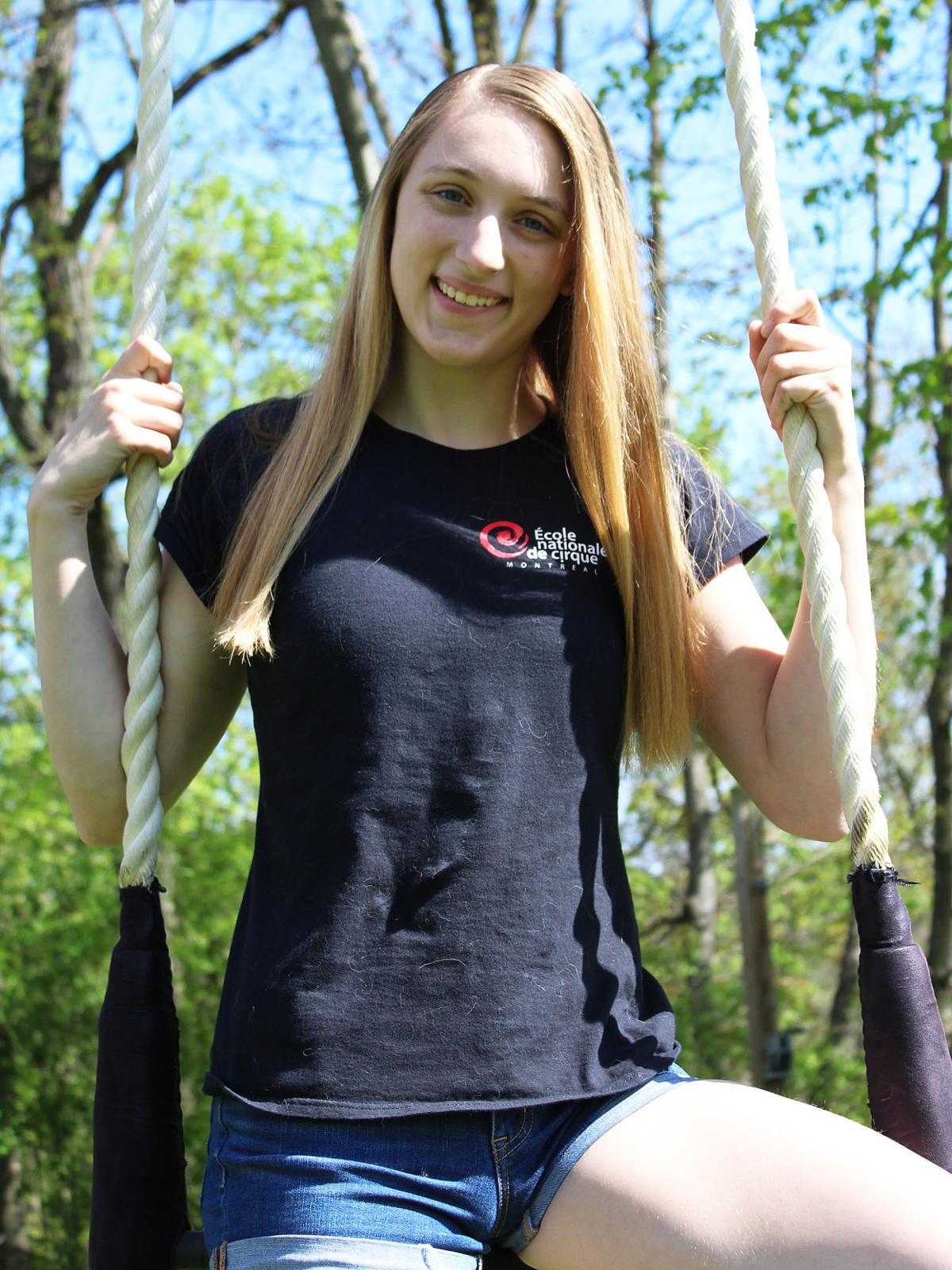 Abby Richert has continued her training in her Bethel Park backyard. 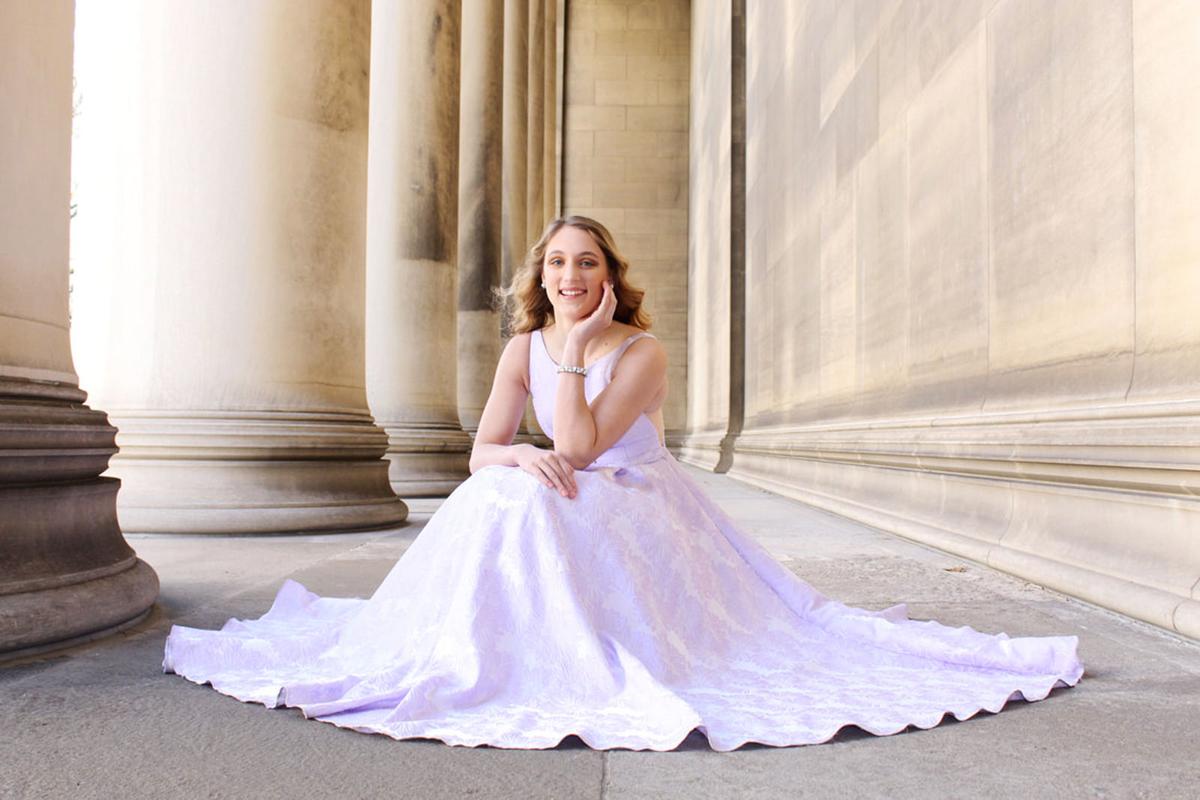 Bethel Park native Abby Richert was accepted into École nationale de cirque in Montreal where she will finish her last two years of high school. 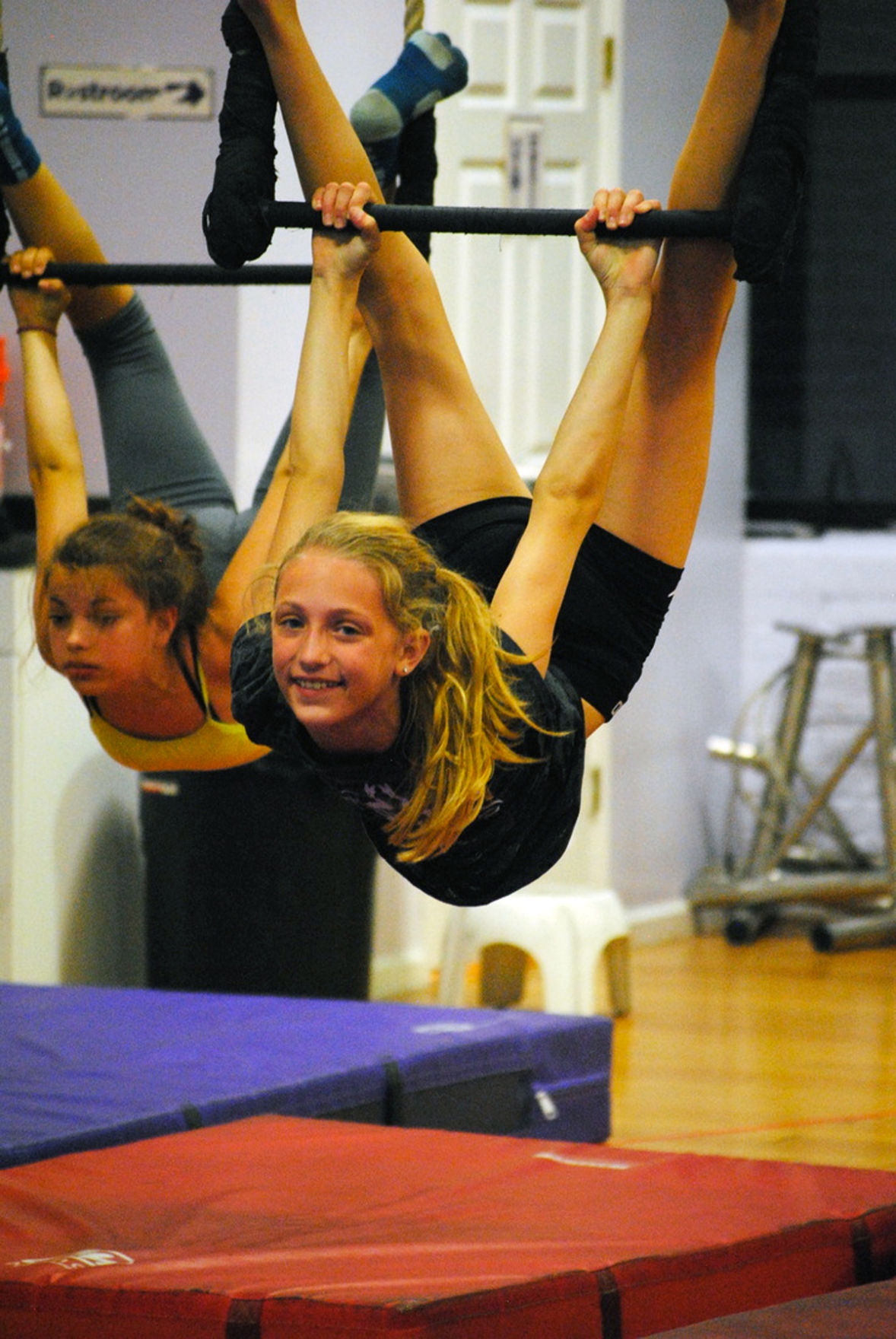 As a youngster, Abby Richert did some training at the Philadelphia School of Circus Arts. 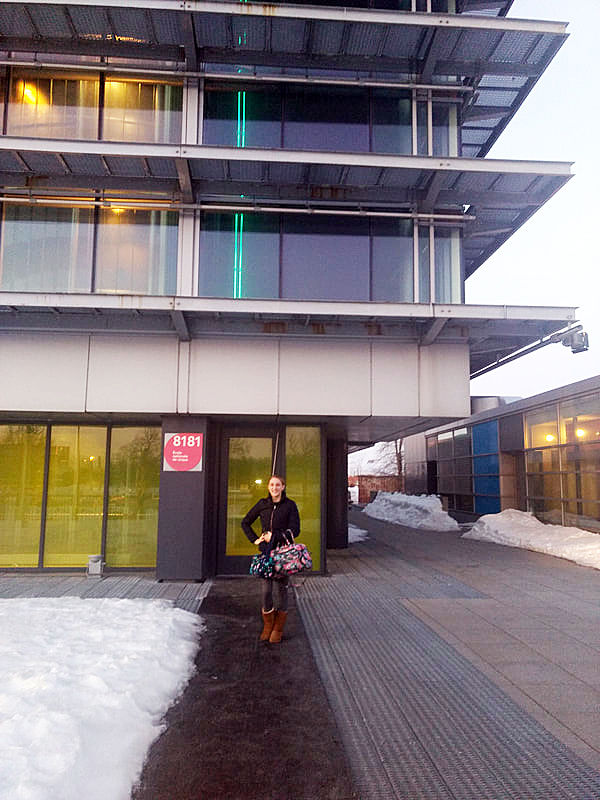 Abby Richert displays her form as a foot archer, one of the many skills she has developed in which she hopes will lead to a career in the circus.

Prior to COVID-19, Abby Richert was training extensively at Iron City Circus Arts in the South Side.

Abby Richert has continued her training in her Bethel Park backyard.

Bethel Park native Abby Richert was accepted into École nationale de cirque in Montreal where she will finish her last two years of high school.

As a youngster, Abby Richert did some training at the Philadelphia School of Circus Arts.

“I came home from school one day,” the Bethel Park resident recalled, “and I was really upset because this boy was basically telling me, ‘What you do is not really athletic. You don’t really have to be strong to do that. You guys kind of just like twirling around.’

What she does often has to be seen to be believed, feats of dexterity and panache that, indeed, require a significant amount of athleticism and strength.

They also can land you on a national TV show.

Seeking the ultimate “I’ll show you” reply to her naysayer, Abby decided to try out for the Universal Kids network’s obstacle-course extravaganza “American Ninja Warrior Junior.”

“At the time, I was so upset. I said, ‘I want to show people that I’m strong. Let’s send in a casting tape.’ And so it just took off from there,” she said. “Soon, we were flying out to L.A.”

As excited as she was to appear on the series, with her episode airing in March 2019, she was even more thrilled to learn this spring about making another cut: acceptance to attend her final two years of high school at École nationale de cirque – that’s National Circus School, for those who haven’t studied French – in Montréal.

If at least the “cirque” sounds familiar, the home base of the internationally renowned Cirque du Soleil is just around the corner from the school, and the two institutions have a strong connection.

And as far as her career plans go, that’s as good as it gets.

“Abby’s goal is to be 18 and travel the world with Cirque du Soleil,” her mother, Lisa, said.

Not just anyone can attend École nationale de cirque. At least 70% of the maximum of 25 students enrolled in the high school program each year must be Canadian, as per the conditions of government funding.

Plus school officials tour that particular country looking for talent.

Despite the apparently slim odds of an American making the grade, Abby’s parents drove her to Montréal in February so she could audition in person, rather than simply submitting a video.

The audition, she reported, lasted for more than 10 hours and included her demonstrating abilities across numerous disciplines, including acrobatics, strength, flexibility, dance and acting. She also came up with a spontaneous dance trapeze performance for the school personnel judging her and numerous other applicants.

“After that, they had us all line up, and we all did a short interview with the judges,” Abby recalled. “And then I was allowed to leave.”

École nationale followed up by sending academic tests for her to take at Lincoln Park Performing Arts Charter School, where she is a sophomore dance major.

“It took four days to complete all of them,” she said.

Finally, she received word she would be accepted. Actually, her father, Todd, received an email to that effect at about 10 p.m. one evening.

“My whole family was watching the ‘Tiger King’ documentary, and then my dad just paused the TV,” Abby explained. “And then as soon as he said, ‘Bon jour,’ we were all like, ‘My gosh!’ It was nice that everybody was together for it and we could all celebrate together, even though we couldn’t have a celebration with my extended family.”

Even though COVID-19 has prevented such gatherings and closed the places where Abby studies – along with Lincoln Park, they include Elite Dance by Damian and Iron City Circus Arts – she continues to train on the 25-foot aerial rig set up in her backyard.

Her path to Cirque du Soleil, she hopes, began with taking dance lessons at a young age, accompanying her sister, Haley.

“I saw that my sister was taking a tumbling class at the dance studio I was going to, and I was really interested in it,” she recalled. “I went into the class and was terrible.”

Despite the inauspicious start, she persevered.

“I just kept picking it up faster, and then from there I realized that I was very flexible and was doing thing in the class that other kids couldn’t,” Abby said.

Attending a birthday party at an aerial studio piqued her interest in circus-type activities, and attending Cirque du Soleil performances really helped seal the deal. Talking with one of the performers, in fact, steered her toward Montréal.

“He said how he went to this school for his last two years of high school, and then Cirque hired him immediately,” Lisa said. “He kind of gave us this plan of what we were going to do for her, because we live in Pittsburgh. This isn’t a circus town. This is not something that most people in Pittsburgh do.”

“But you don’t just study your major discipline up there. They really want a well-rounded athlete,” she said. “So you have to study strength and flexibility, because those two are so important to any discipline you do, in general. And then they really want you to have acrobatics training, dance and acting, because that makes an overall performer.”

One type of performance Abby can do is foot archery, the art of shooting an arrow with a bow while doing a handstand, a feat that came in handy when fulfilling a science teacher’s assignment to come up with a Rube Goldberg contraption.

“She told us that she really wanted something unique and for us to think outside of the box for this,” Abby said. “So I mentioned to my dad: ‘How can I make this unique? I really want to stand out from the rest of my class.’”

He’s the one who suggested her activating the contraption with a foot-launched arrow, and it took Abby just a few tries to make everything work, with Lisa capturing the results on video.

“I showed it to my teacher, and she loved it,” Abby reported.

Apparently, producers at “Good Morning America” did, too. After Lisa submitted the video to the long-running ABC-TV series, a nationwide audience was treated to a look at Abby’s skills in September 2018.

If all goes according to her Cirque plans, audiences around the world will be next.