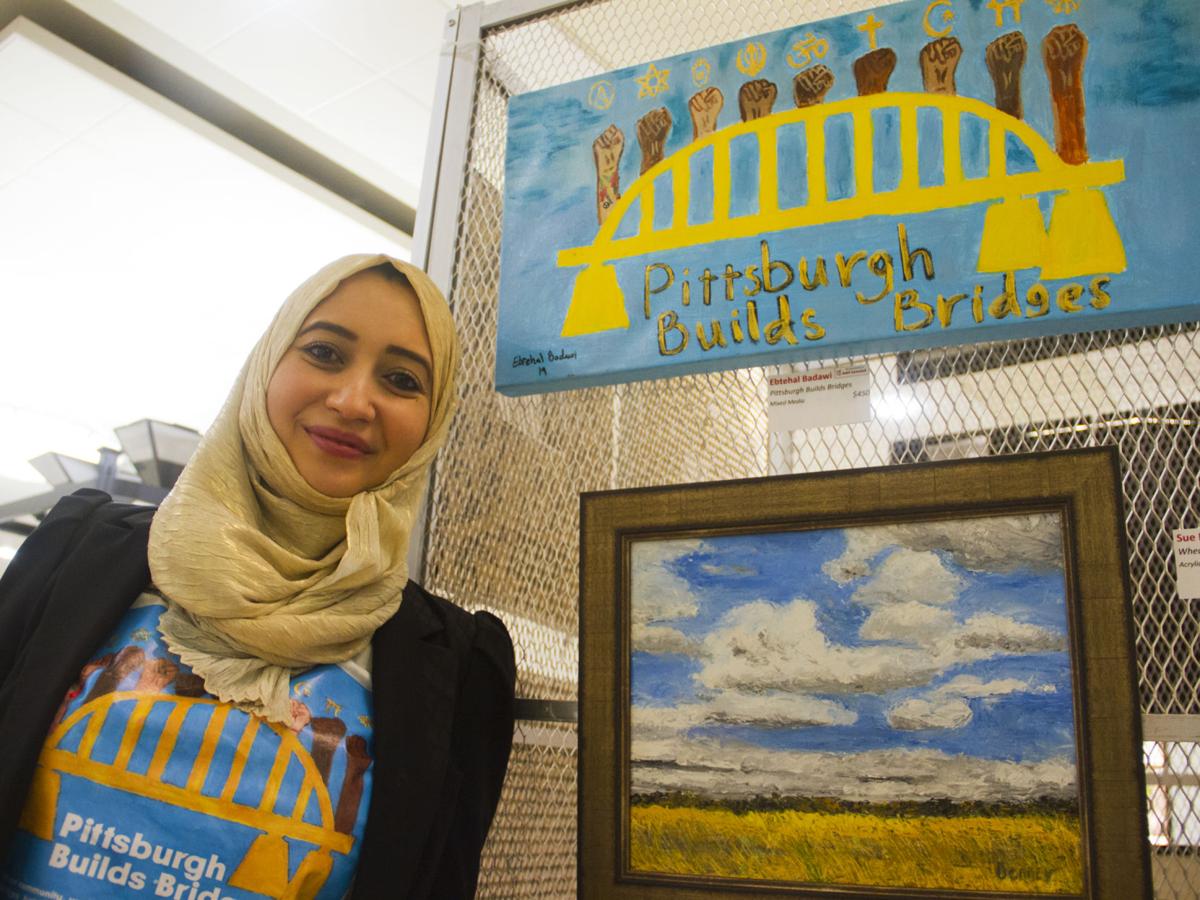 Ebtehal Badawi shows her painting “Pittsburgh Builds Bridges,” both the original and T-shirt version, during an art show at the Galleria of Mt. Lebanon. 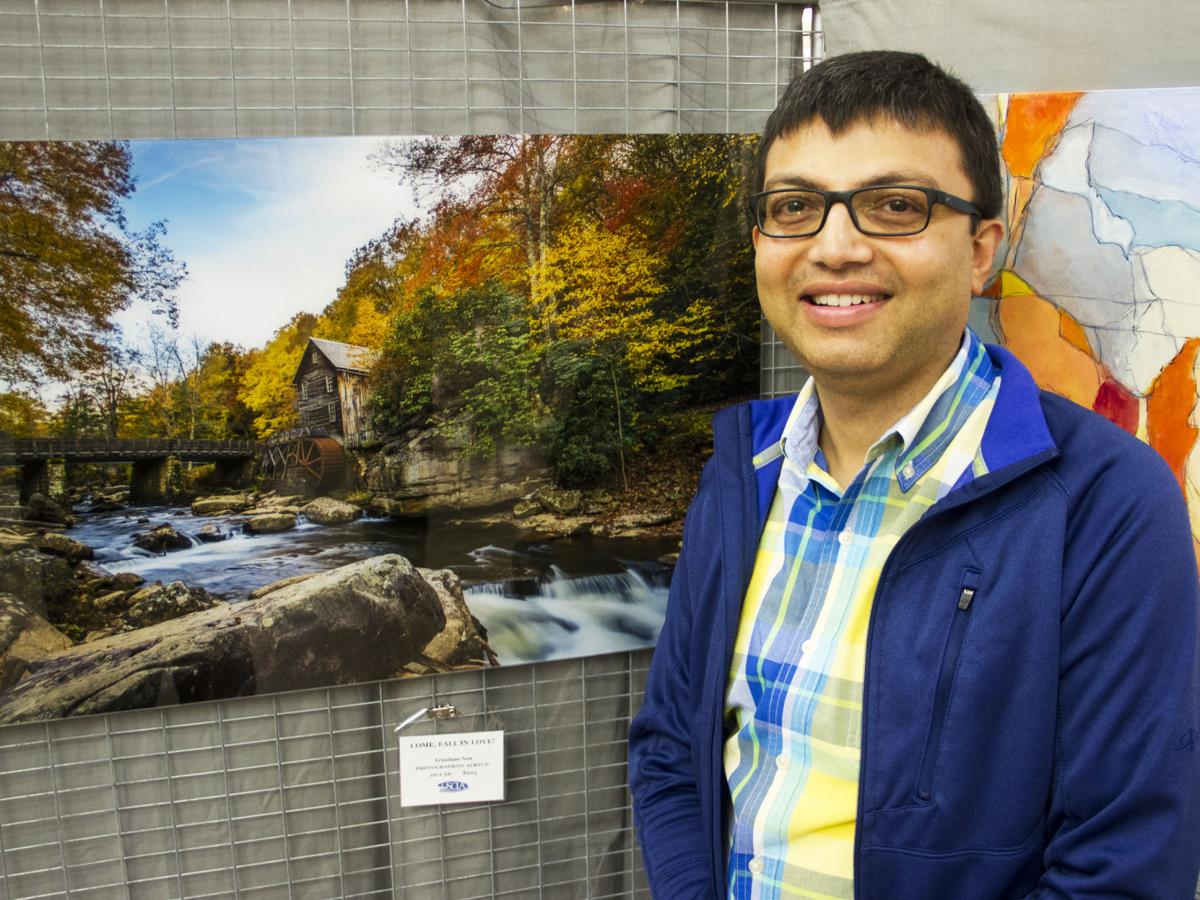 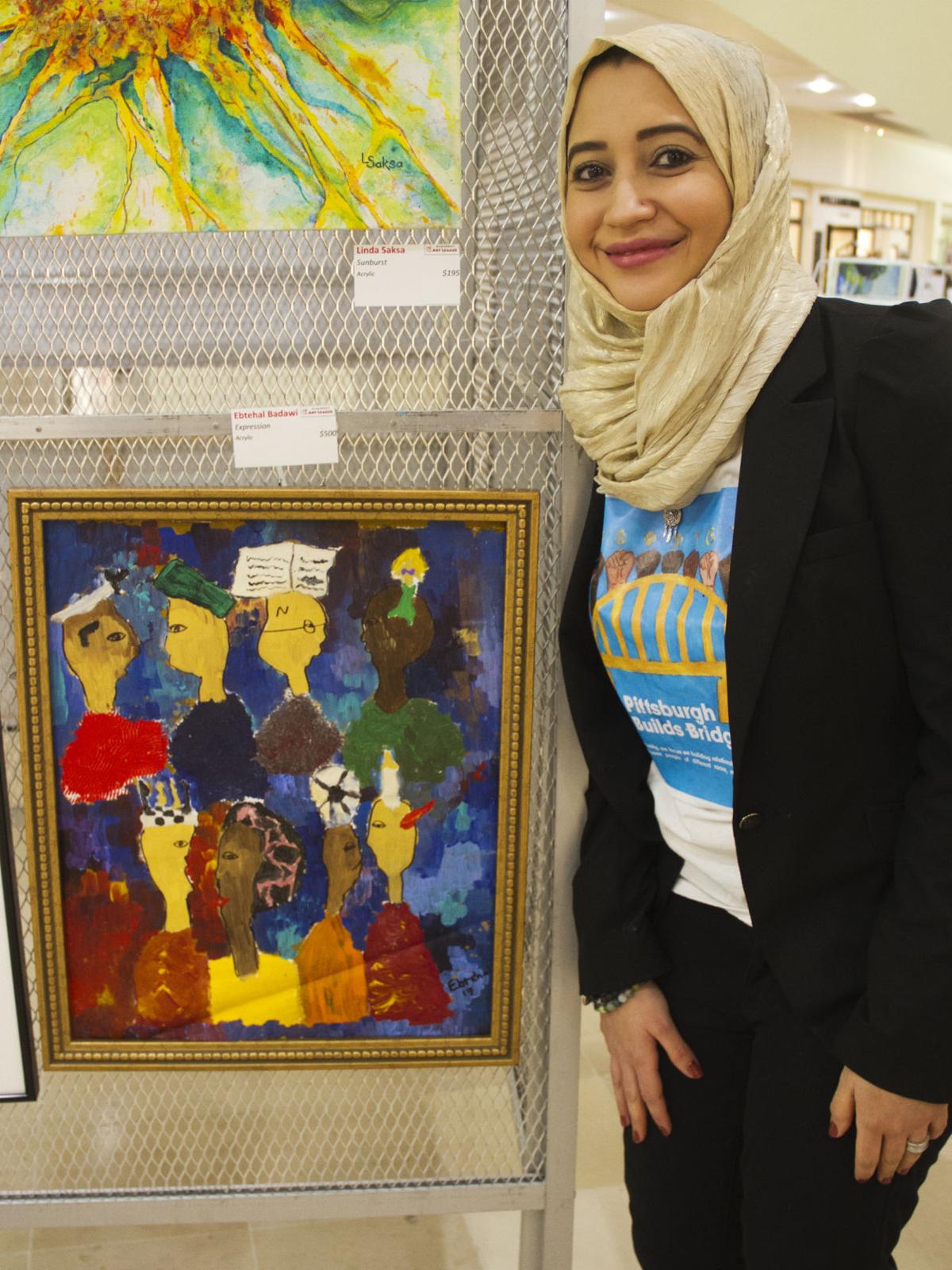 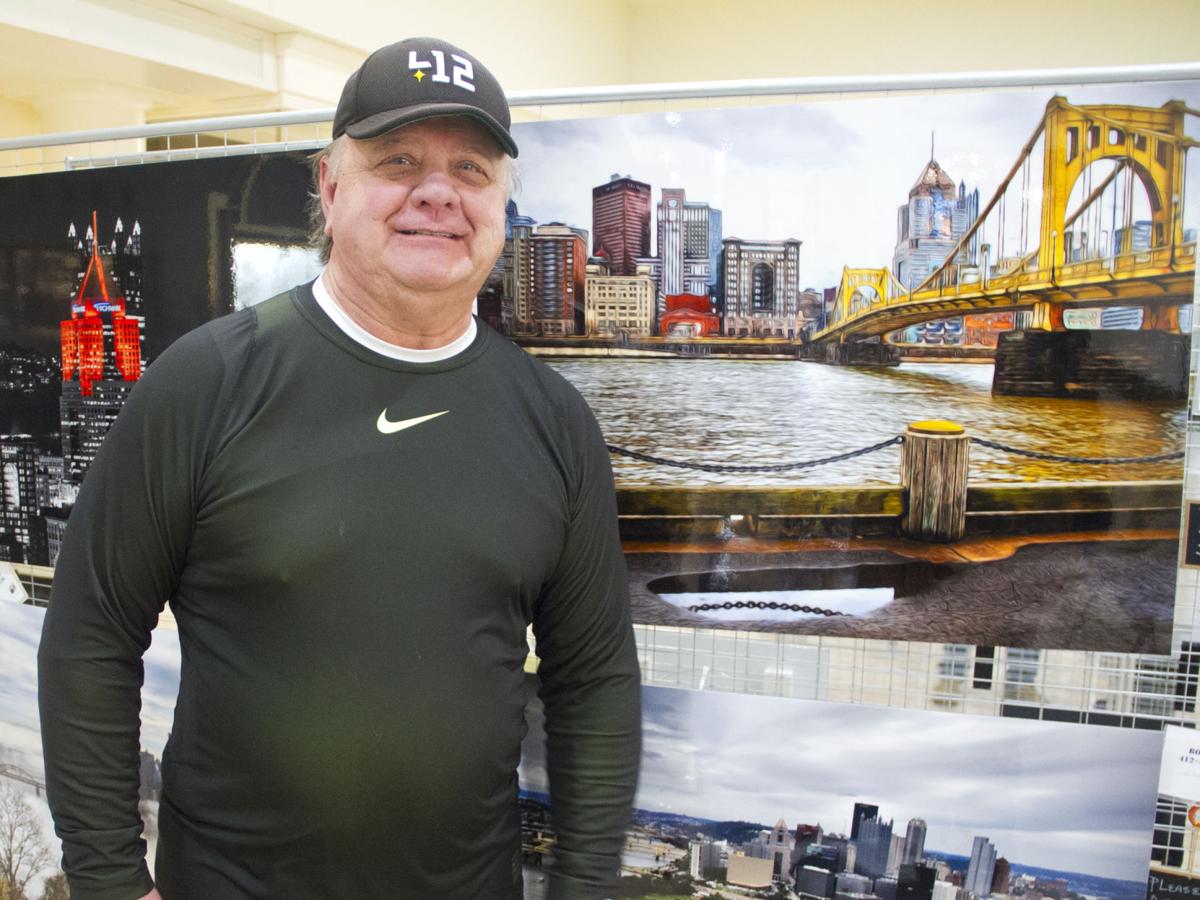 Photographer Bob Hayes displays some of his shots of Pittsburgh. 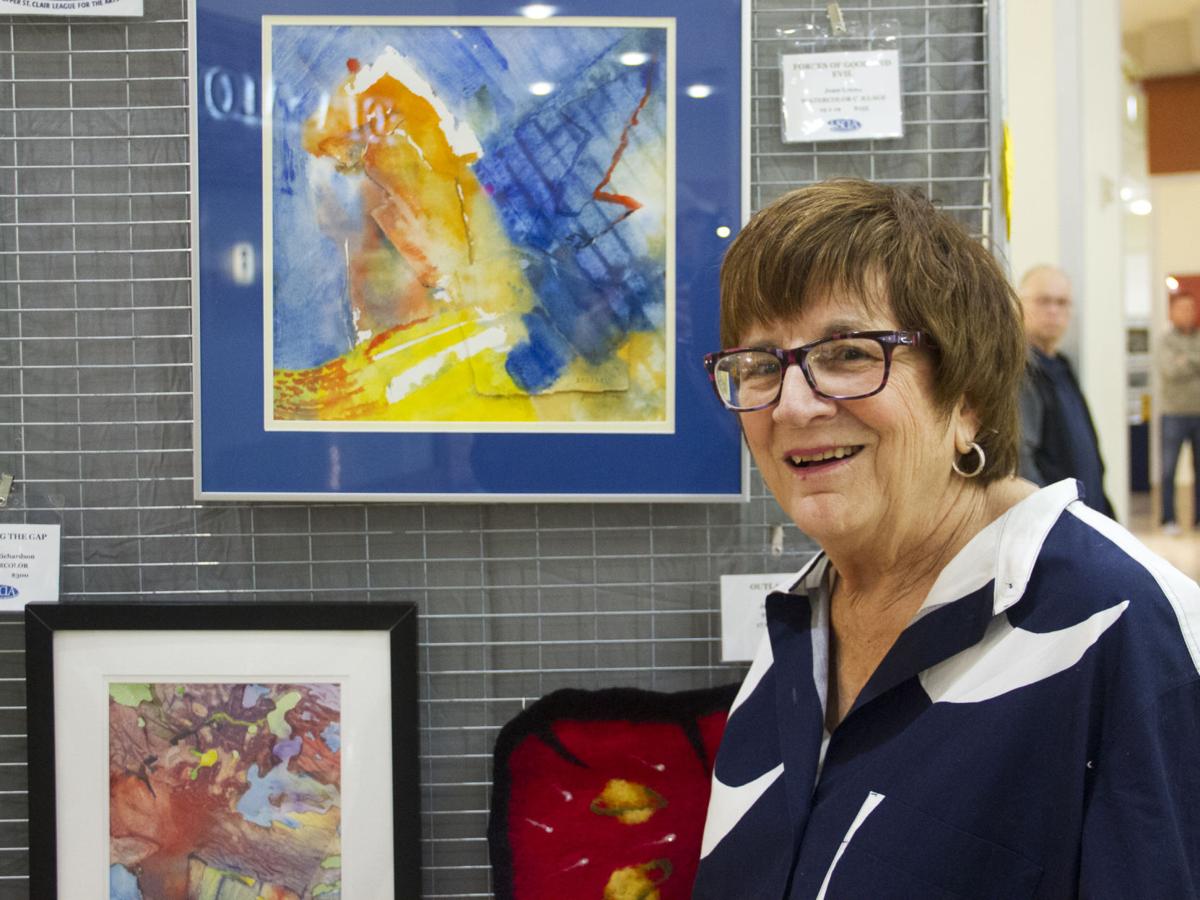 Joan Green of Upper St. Clair with her watercolor collage “Forces of Good and Evil” 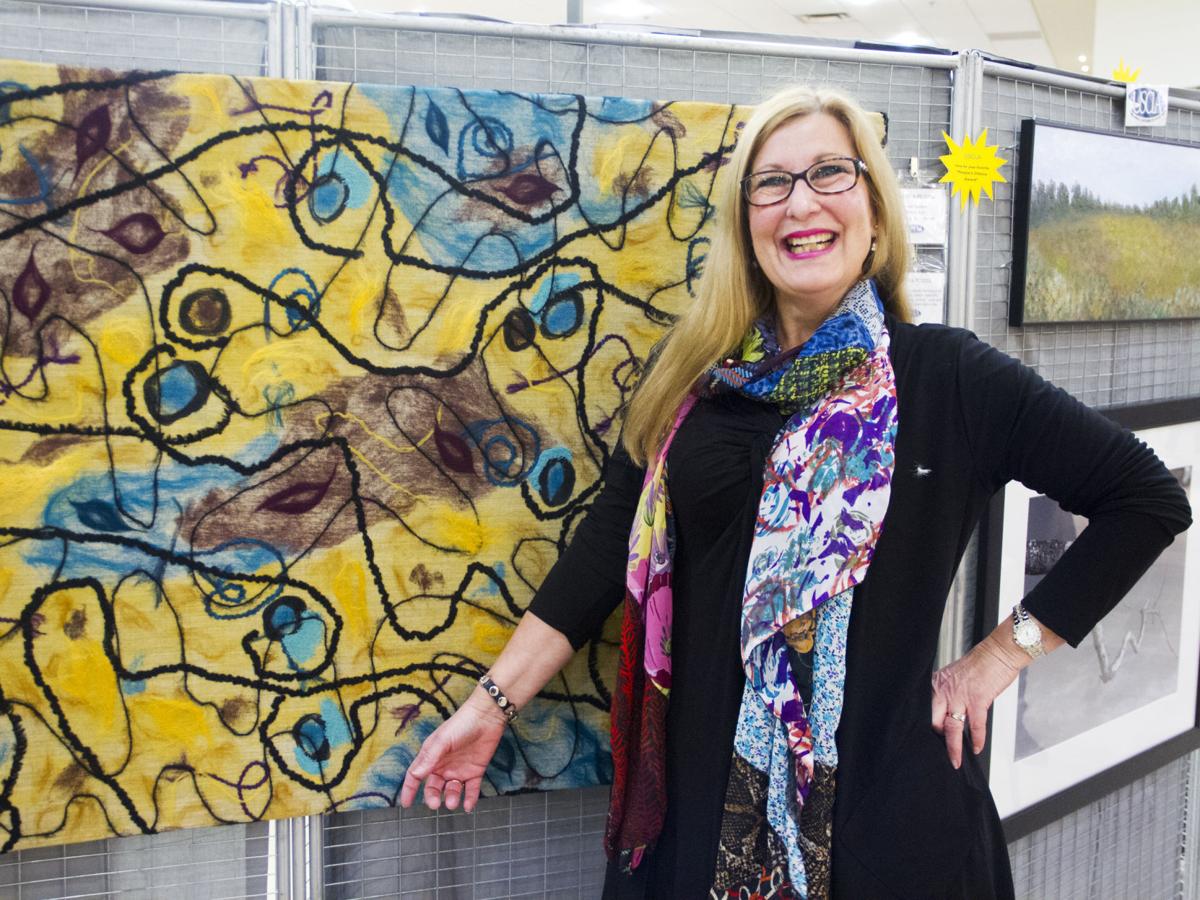 Felt artist Judé Ernest, a Mt. Lebanon resident and Upper St. Clair League of the Arts member, had several pieces on display at the show, including one that took third place. 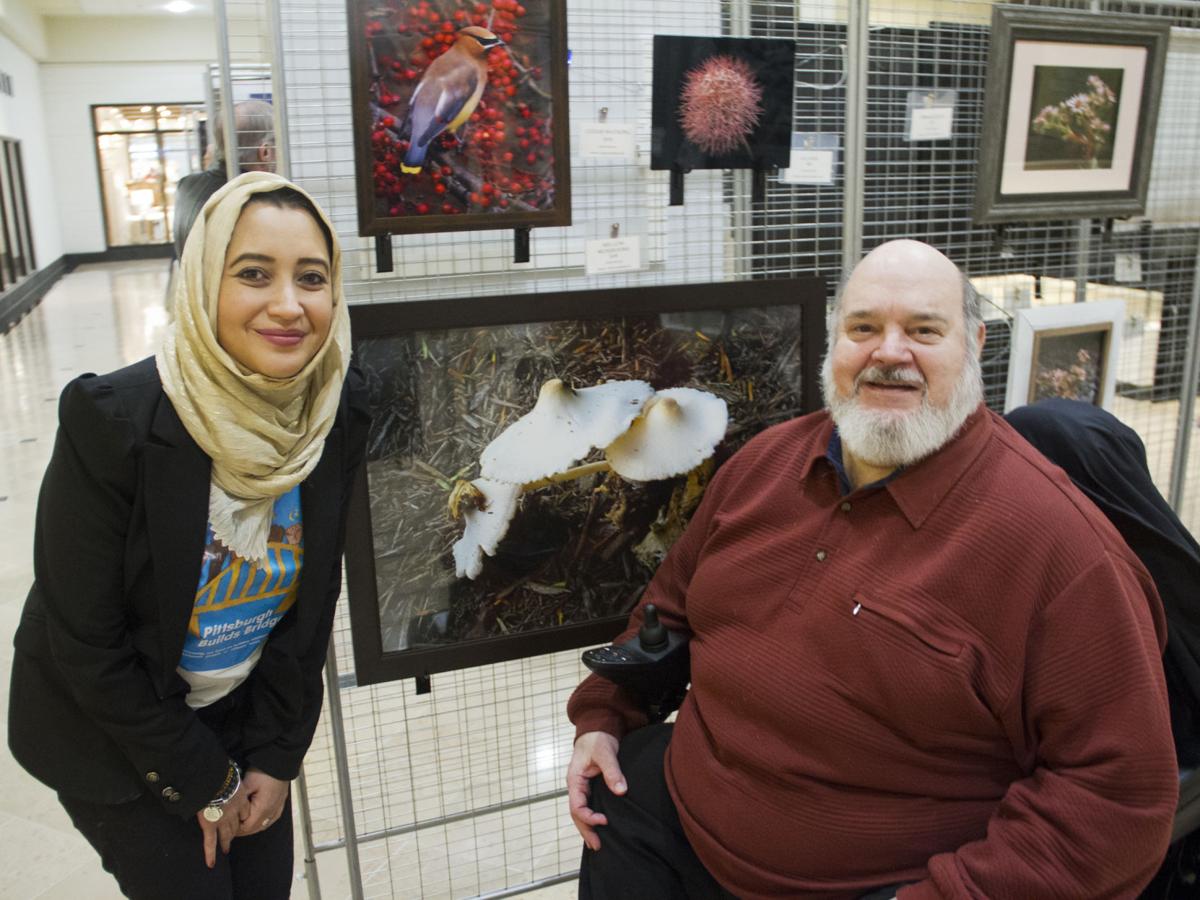 Ebtehal Badawi shows her painting “Pittsburgh Builds Bridges,” both the original and T-shirt version, during an art show at the Galleria of Mt. Lebanon.

Felt artist Judé Ernest, a Mt. Lebanon resident and Upper St. Clair League of the Arts member, had several pieces on display at the show, including one that took third place.

Pittsburgh and bridges practically are synonymous. Throw in a few tunnels – some construction crews, too – and there’s the city, in a nutshell.

Ebtehal Badawi has taken the association in a new direction.

The McMurray Art League member’s mixed-media work “Pittsburgh Builds Bridges” centers on the theme of connecting people in Western Pennsylvania and beyond, regardless of their differences.

The painting was on display as part of Spring Art Show 2019 at the Galleria of Mt. Lebanon, featuring creations from members of seven artists’ groups around the South Hills. And for the event’s March 2 reception, Badawi wore a short with “Pittsburgh Builds Bridges” imprinted, with an accompanying statement:

“In our community, we focus on building relationships. We strive to build bridges between of different races, religions and cultures.”

A Pleasant Hills resident, Badawi said the impetus for the work came in response to a December incident at Chartiers Valley High School in which a Syrian refugee student was injured and hospitalized. The design will be featured in conjunction with a March 30 panel discussion at the University of Pittsburgh, “Building Bridges in Our Communities,” presented by Pitt’s Muslim Alumni Council and Muslim Student Association.

Another of Badawi works displayed at the Galleria, “Expression,” depicts four pairs of individuals facing one another and conversing.

“As they share their differences, all these beautiful colors come out of them,” Badawi explained. “A lot of us are afraid of the unknown. But as we get to know each other, as we share, we learn that we are all the same. We love the same thing. We hate the same thing. There is more that connects us than separates us.”

Bridges in Pittsburgh and beyond also figure prominently in the work of other artists in the Galleria show. Arindam Sen of Upper St. Clair, for example, displayed his photograph of the Fort Pitt Bridge with the city’s skyscrapers in the background, as captured shortly after sunrise.

Contrasting the urban scene is his “Come, Fall in Love!” photograph on acrylic, which he took at Babcock State Park, along the New River Gorge in West Virginia. The scene depicts a stream flowing from under an old stone-pillar bridge.

“As a photographer, I keep doing research: What are the places I should go and visit?” the Upper St. Clair League of the Arts member said. “I found someone who put it live on Facebook saying that Babcock State Park this year has a beautiful color. And then overnight, I actually decided, OK, let’s go tomorrow morning. That’s how impromptu it was.”

Also represented at the Galleria were members of the Photographic Section of the Academy of Science and Art of Pittsburgh, which meets in Mt. Lebanon. Among them was Bob Hayes, who also enjoys pointing his lens at scenes that include bridges, such as his shot of the Roberto Clemente Bridge crossing the Allegheny River.

One of his photos features mist hovering above the Monongahela River against the backdrop of Pittsburgh’s skyscrapers.

“This is the type of shot that you have to be patient with,” he explained. “The fog was at the top of the buildings, and then it had to settle. So that took an hour and a half.”

Joan Green, another Upper St. Clair League of the Arts member, works in a different type of medium.

“A friend told me she had a great watercolor teacher. I said, ‘I can’t draw.’ She said, ‘Oh, come. You’ll have a good time.’ That was 13 years ago,” Green recalled.

She’s been employing the talents she discovered ever since.

“It’s very relaxing, very soothing, and if ever I can’t sleep at night, I go down in the basement and paint.”