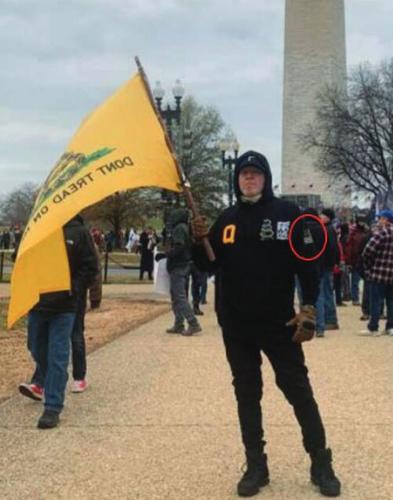 A photo provided by the U.S. Department of Justice shows Kenneth Grayson of Bridgeville holding a Gadsden “Don’t Tread On Me” flag before he entered the U.S. Capitol during the Jan. 6 attack on Congress. 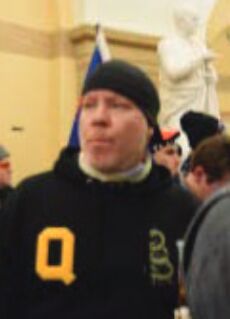 This screenshot provided by the FBI shows Kenneth Grayson of Bridgeville inside the U.S. Capitol during the Jan. 6 riot.

A photo provided by the U.S. Department of Justice shows Kenneth Grayson of Bridgeville holding a Gadsden “Don’t Tread On Me” flag before he entered the U.S. Capitol during the Jan. 6 attack on Congress.

This screenshot provided by the FBI shows Kenneth Grayson of Bridgeville inside the U.S. Capitol during the Jan. 6 riot.

The Bridgeville man who live-streamed himself storming the U.S. Capitol during the Jan. 6 attack on Congress pleaded guilty Tuesday in federal court in Washington, D.C., and will be sentenced later this year.

Kenneth Grayson pleaded guilty to one felony count of civil disorder during an hour-long hearing before U.S. District Judge Tanya Chutkan, who has handed down tough sentences to other Capitol rioters who have come before her.

Federal investigators said Grayson rented a van and traveled with several other people from the Pittsburgh area to attend a rally in support of former president Donald Trump near the White House, before his group marched to the Capitol and entered the building. He live-streamed on social media a video of himself inside the basement crypt during the riot, which investigators used to identify him.

Chutkan walked Grayson through the facts of the case, asking him to acknowledge every aspect of what he did in order for her to accept his guilty plea.

“We’re not going to rush this,” Chutkan told him. “You need to understand every aspect of this decision.”

During some portions, however, Grayson appeared hesitant to answer or seemed to want to add context as Chutkan laid out the narrative of his role in the riot.

“Yes, there was a reason for it, but yes that did happen,” Grayson said about how his group got into the building.

“I don’t know if I can add more?” Grayson said before trailing off.

“You can’t plead guilty to something you didn’t do, so I’m walking you through the facts of the (case),” Chutkan said.

Chutkan then asked Grayson about his time in the crypt area of the Capitol and whether he joined the mob of Trump supporters interfering with police officers trying to clear the building as Congress was certifying Joe Biden’s election as president.

“Unintentionally, I did, your honor,” Grayson said.

That prompted the judge to ask Assistant U.S. Attorney Maria Fedor whether she had an issue with Grayson’s responses. Fedor said she wanted the record to be clear that what Grayson did was illegal and that he knowingly participated in the riot.

“When you went into the Capitol, did you see the commotion and disturbance going on?” Chutkan asked the defendant.

“Did you know you weren’t supposed to be there?” Chutkan asked.

Two weeks before the presidential certification, Grayson sent text messages to an acquaintance indicating he planned to disrupt the proceeding.

“I’m there for the greatest celebration of all time after Pence leads the Senate flip!! OR IM THERE IF TRUMP TELLS US TO STORM THE (expletive) CAPITAL IMA DO THAT THEN!”

Grayson confirmed to the judge that he sent the text message as he pleaded guilty to the felony civil disorder charge, which deals with obstructing, impeding or interfering with police officers in their duties at a federally protected function.

Grayson, 53, was arrested Jan. 26, 2021, less than three weeks after the assault on the Capitol. He was initially jailed, but released on bond a few days later and he’ll continue to be free until his sentencing. Chutkan is scheduled to sentence Grayson in person at 2 p.m. Dec. 19 in U.S. District Court in Washington, D.C.

He faces up to five years in prison, although Fedor and his federal public defender, Ned Smock, apparently reached an agreement on the parameters of the sentence they will ask for as part of the plea deal. The terms of that deal were not released, but Chutkan noted that she is not bound by that agreement and that she can issue a harsher sentence as she has typically done with other Jan. 6 defendants.

“I can go above that if I choose to, do you understand that?” Chutkan said.

A pre-sentence investigation will be performed by federal authorities, and friends and relatives of Grayson will be permitted to send letters to Chutkan vouching for his character.

“I don’t know anything about you,” Chutkan said. “The more I know about you the better I can tailor the sentence.”

Mike Jones has been a news reporter since 2005, covering crime, state and municipal government, education and energy. He has worked at the Wheeling Intelligencer, Observer-Reporter, Charleston (W.Va.) Daily Mail and Patch.com.