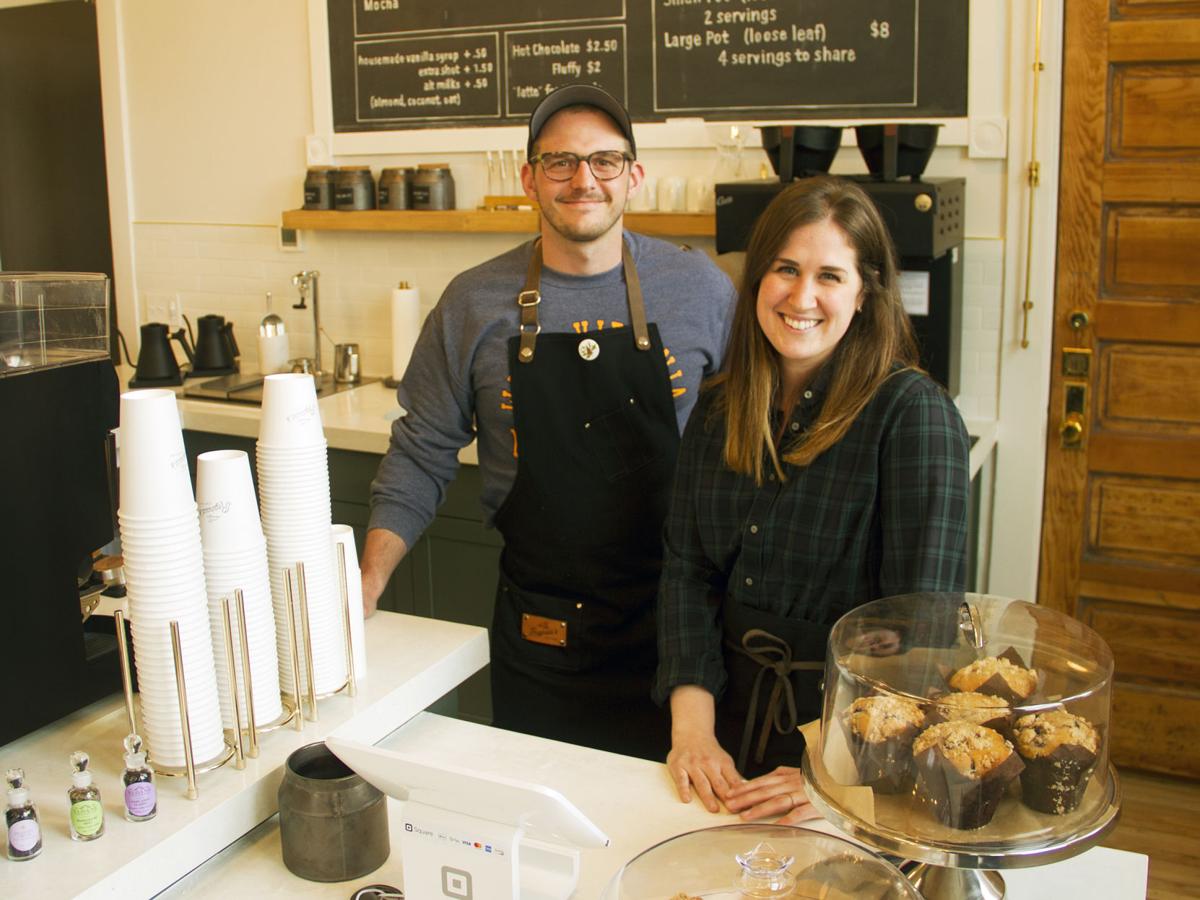 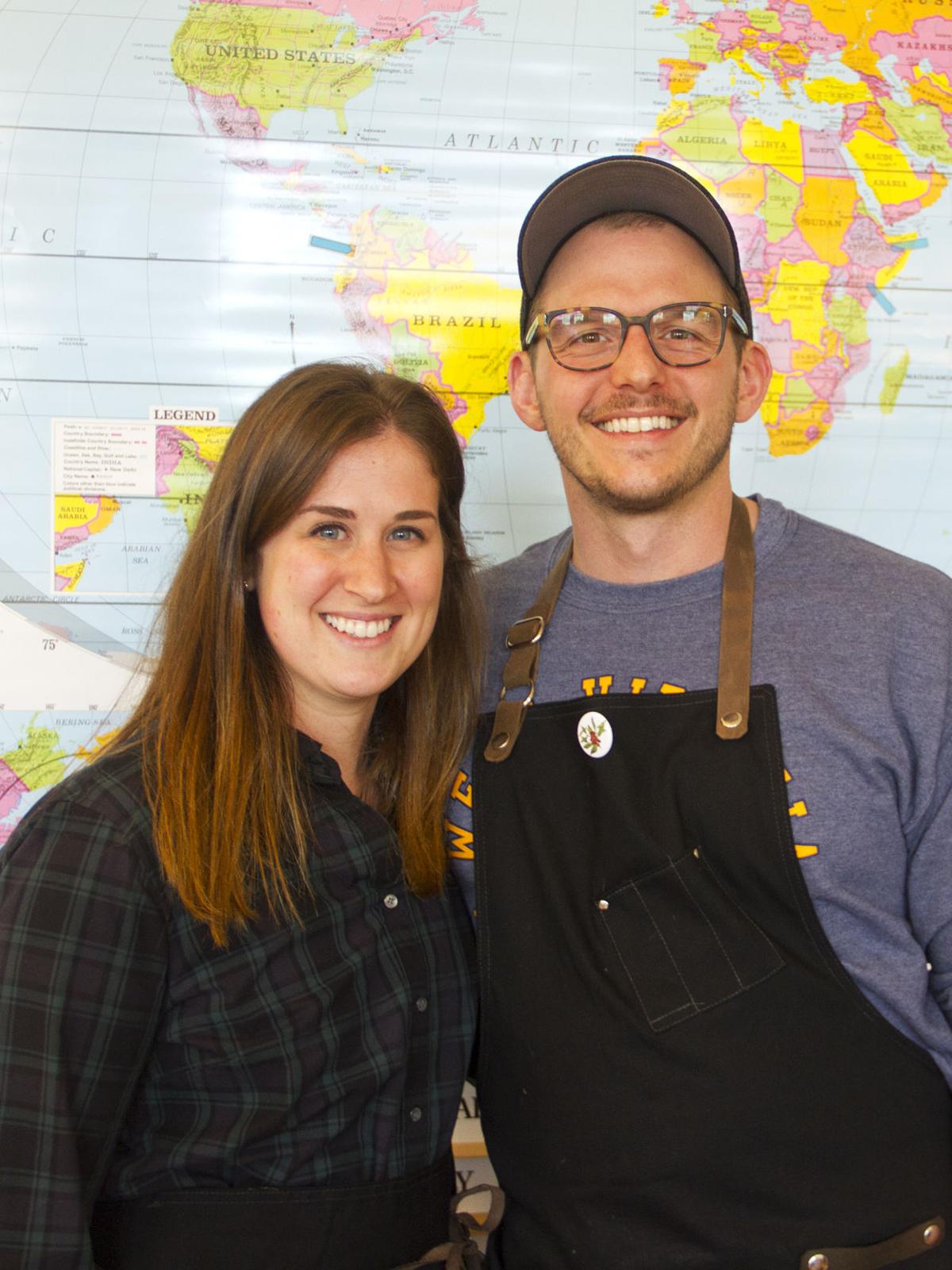 Julie and Matt Koczko have a world map at Reginald's highlighting the countries of origins for the beans roasted at the shop. 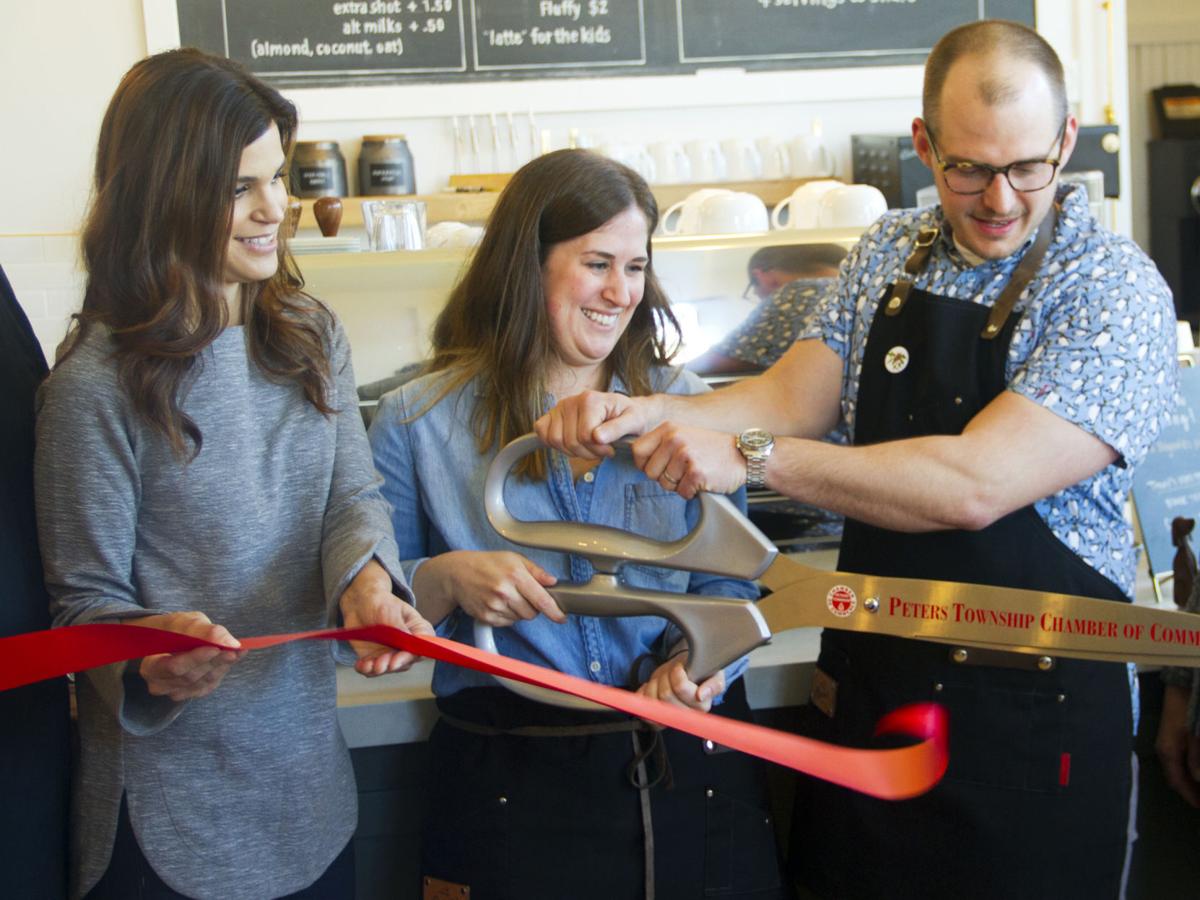 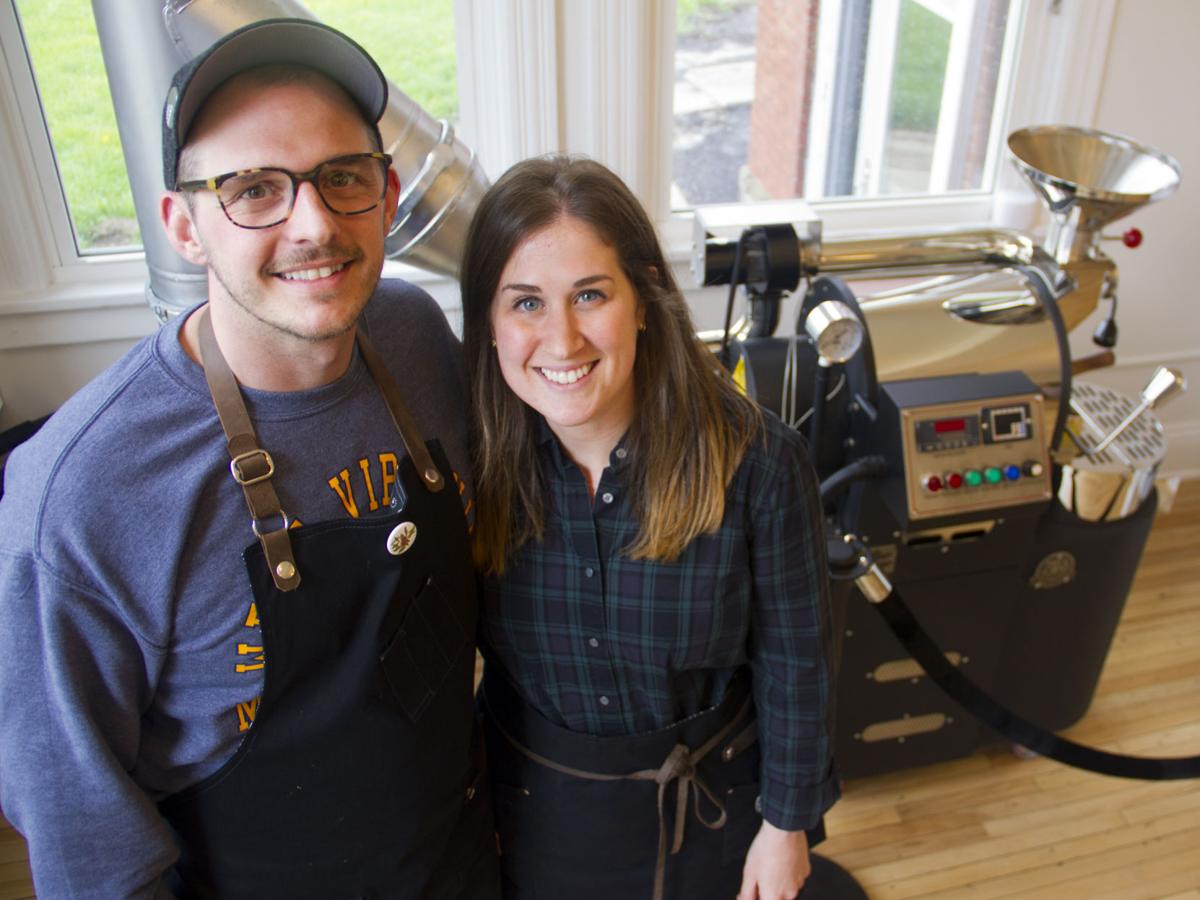 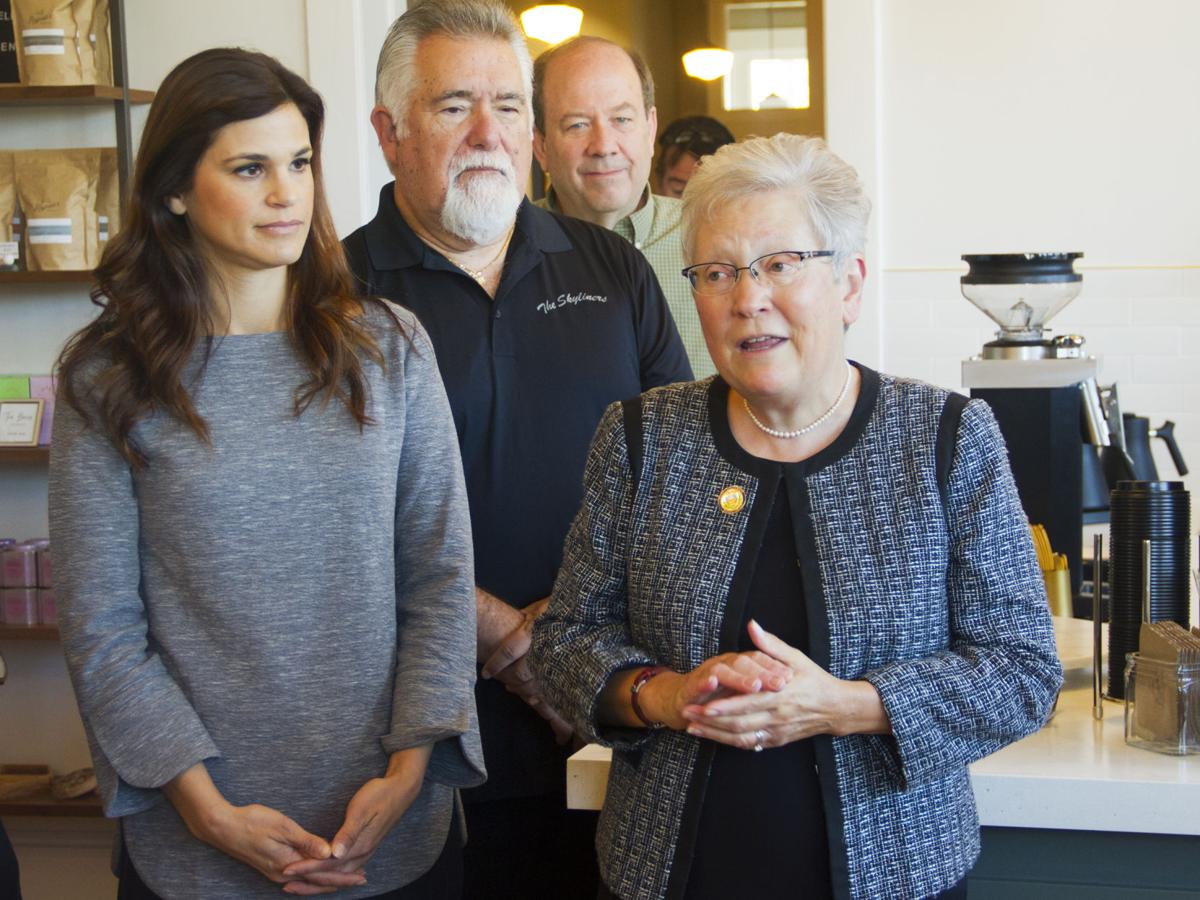 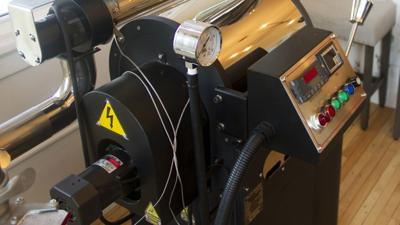 Pay a visit to Reginald’s Coffee, and a definite canine theme in the decorations and even the company logo will appear.

The theme also applies to the name of the new establishment, which owners Matt and Julie Koczko took from one of their dogs.

“If Reggie were a human,” Julie said, “he would have the personality of someone who would sip coffee and read the paper.”

Reading, as it turns out, is eminently appropriate for the shop’s location in one of the former classrooms at Schoolhouse Arts and History Center in Bethel Park, the South Park Road building that was constructed in the early 20th century as Bethel High School.

During the past few years, members of Bethel Park Historical Society have done a remarkable job of rehabilitating the structure as a community asset. The Koczkos contributed by renovating the space for their business along with an entrance featuring a ramp for accessibility.

“That was kind of the last thing that needed to be done before we could open,” Julie said. “So now everybody can get into the building, which is great.”

Reginald’s grand opening, complete with a ribbon cutting, took place April 20, with a contingent of elected officials joining the celebration. Among them was Allegheny County Council member Sue Means, who attended elementary school in the building.

So did her father, Pete Edwards, a World War II veteran who now is 98.

“I’m so excited because this is a place where we’re going to build relationships with our friends and family,” Means said. “We’re going to make memories.”

The Koczkos’ memories of that day might focus on how busy they were following the ribbon cutting, hustling to serve customers who wanted to try drinks featuring Reginald’s roasted-on-the-premises beans.

The roaster, which can accommodate batches of two kilograms – that’s close to 4.5 pounds worth of beans – serves as a focal point for the café, situated in front of a big bank of windows and, much like a museum piece, behind a velvet rope.

A coffee connoisseur, he started roasting his own beans several years ago after discovering he could do so using a popcorn popper.

“You could make maybe two ounces at a time, and that’s enough for maybe a couple of drinks. So it would take you hours to roast your coffee for the week for you and your wife,” he said. “And as soon as you’d start to use it over and over again, the thing would burn out, so you’d have to get another one.”

They graduated to a larger machine and began to share the roasted beans with family members and friends.

“Everybody was liking it, so we were kind of saying, why don’t we think about selling it?” Matt said.

Although Reginald’s represents their first foray into business ownership, Julie’s family has plenty of experience along those lines. Her late grandmother Fern Schmidt founded Johnny’s Drive-In, known for its Monster Burger, in West Elizabeth, and her parents, Bill and Debbie Pigozzi, have owned several ventures, including starting the Monkey Bar in Pleasant Hills.

“They’re entrepreneurs, so hopefully it runs in the family,” Julie said.

She and Matt are graduates of Thomas Jefferson High School who moved to Bethel Park, where Julie originally lived, after they were married. Along with Reggie, mostly Brittany spaniel with some Chihuahua, they have another rescue dog, Lulu.

As such, it would seem as if they have a built-in name should they decide on another business venture.