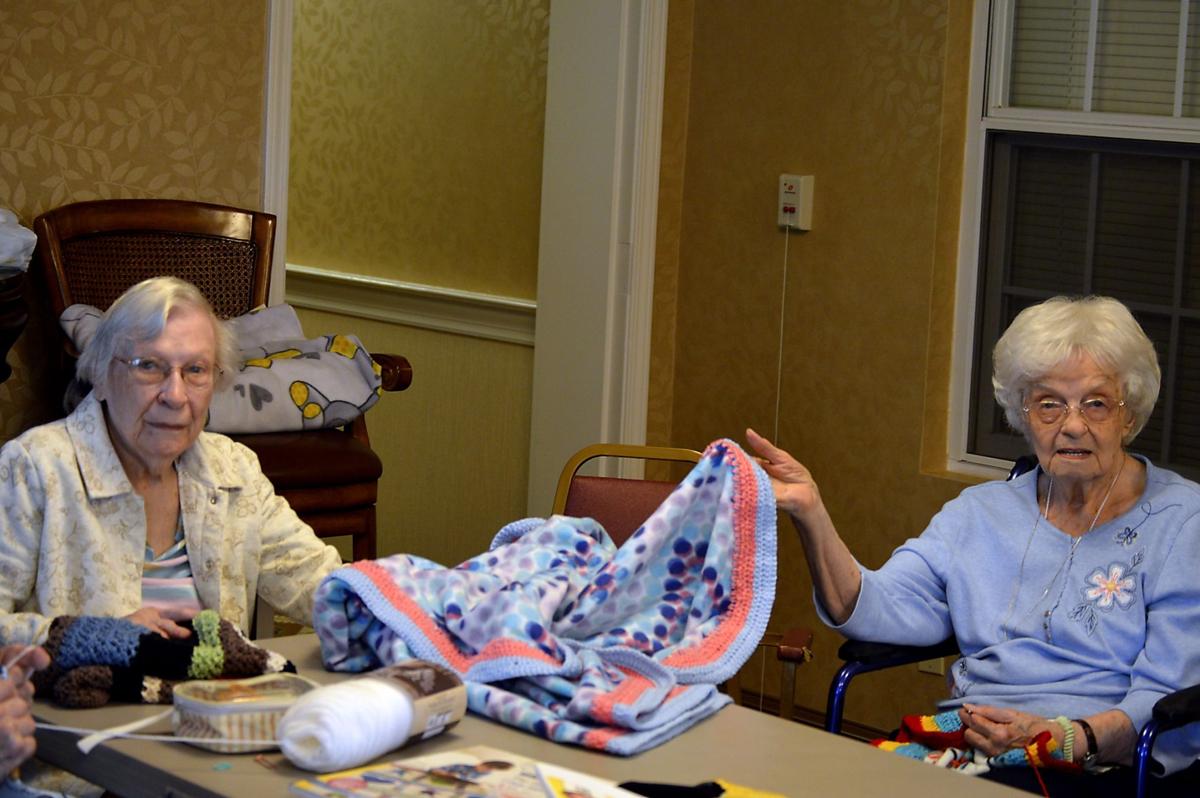 Ede Moore (left) and Helen Stasik hold one of many blankets the group at Country Meadows has made for children in local hospitals. 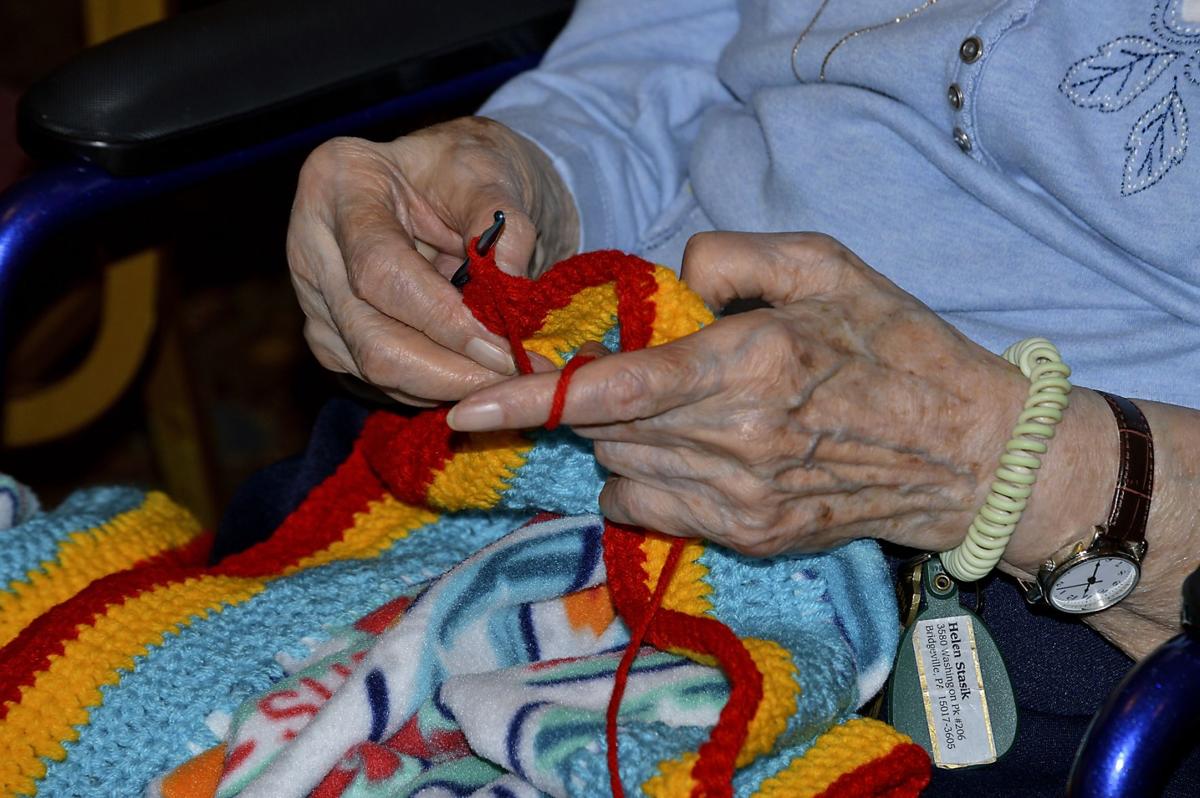 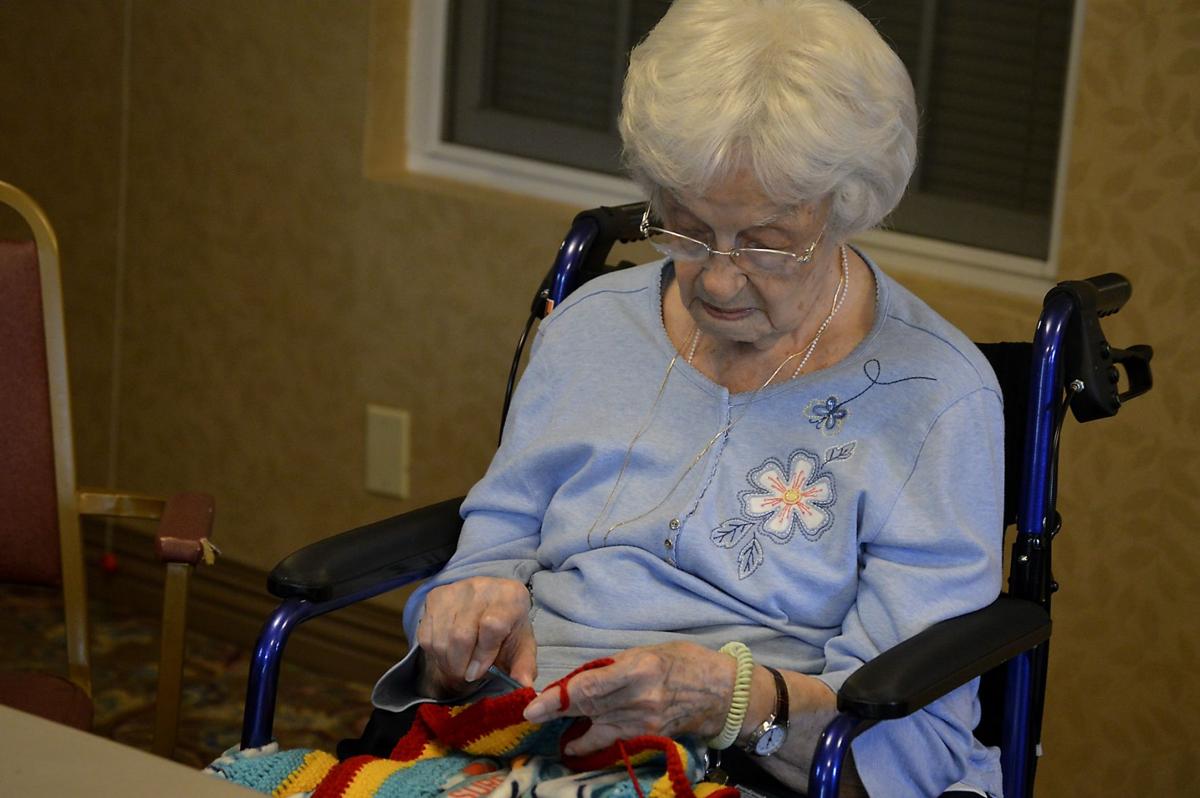 Helen Stasik, 93, went through physical therapy for arthritis in her hands to be able to take part in the project.

Ede Moore (left) and Helen Stasik hold one of many blankets the group at Country Meadows has made for children in local hospitals.

Helen Stasik, 93, went through physical therapy for arthritis in her hands to be able to take part in the project.

There are about eight women in the room, most in their 80s or 90s. Another woman walks in.

“Do you want to learn how to knit or crochet?” asks Ede – everyone calls her Ede.

Though she politely declined, that’s not the first or last time Ede is going to ask someone to join her group that makes blankets for babies and children in hospitals.

Since 1995, a nationwide initiative called Project Linus that utilizes 400 chapters across the country has provided more than six million homemade blankets to ill or traumatized children. Ede originally got involved with her church, Christ United Methodist in Bethel Park.

When Ede, 93, of Scott Township, came to Country Meadows earlier this year, she brought the project with her, and the group of eight blanketeers have knit, crocheted, quilted or sewed more than 40 blankets over the summer.

“I felt that they would enjoy making these blankets,” Ede said. “I knew that there were women who could knit or crochet, but they didn’t have a purpose. Now they have one.”

The women are part of the Greater Pittsburgh Area Chapter, which serves Allegheny, Butler, Washington and Westmoreland counties.

The blankets they make at the retirement home in South Fayette go to West Penn Hospital’s Neonatal Intensive Care Unit and Pediatric Burn Unit, as well as Children’s Home of Pittsburgh and Lemieux Family Center. Due to being used in hospitals, the blankets must adhere to high standards. They must be handmade, washable, smoke free and chemical free, and a standard size.

Ede said the blankets are “precious” to the families. In cases in the NICU when a baby dies, the family takes the blanket home with them.

“It’s very important and it means a lot to the families,” Ede said.

Along with Ede are several other women at Country Meadows who meet every Tuesday at 10:30 a.m. Grace Caputo, 89, started crocheting when she was 8 years old, and Helen Stasik, 93, has been knitting so long she can’t even remember when she started.

Before Ede brought the project to Country Meadows, Stasik had stopped knitting due to arthritis in her hands. So she could help out with the project, Stasik starting doing physical therapy about six months ago and she started knitting this summer.

“It’s something that’s special,” Ede said. “I’m very proud. I never thought I’d get this much of a response.”

Ede was also grateful for Country Meadows and its help in the project, as they provide the materials for the women to make the blankets.

“Country Meadows is very supportive of this project,” Ede said.

Along with meeting every Tuesday, the women also spend countless hours in their own apartments making blankets throughout the week.

On this Tuesday morning, two new women are learning how to knit and crochet so they can join the project, and there to help are women from Christ United Methodist Church.

Brenda Pavlack said she’s amazed by the talent the women at Country Meadows have.

“These ladies have a gift,” Pavlack said.

She’s communicated with families who have received blankets from the Greater Pittsburgh Area Chapter, and the consensus is clear.

“Everybody loves a good blanket.”