You are the owner of this article.
Edit Article Add New Article
You have permission to edit this article.
Edit
Welcome, Guest
News
Sports
Life & Culture
Events Calendar
Lottery Results
Fish Fry Map
Weather
Classifieds
e-Edition
South Hills Living
Get Our Newsletter
Get the Almanac
Advertise With Us
Submit Content to The Almanac
Contact Us
About Us
1 of 13 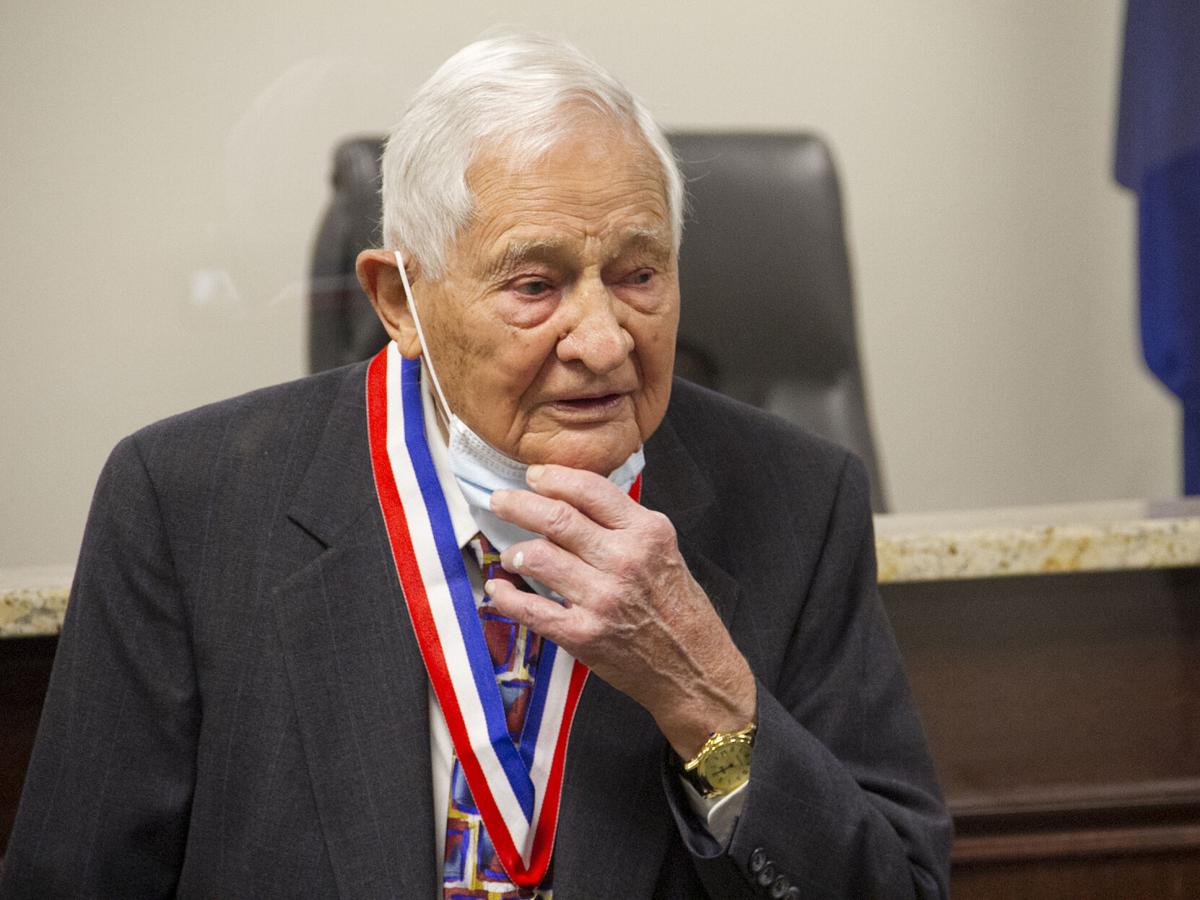 Peter Edwards Jr., properly socially distanced from everyone, pulls down his mask to speak during the celebration of his 100th birthday at District Judge Ronald Arnoni’s office. 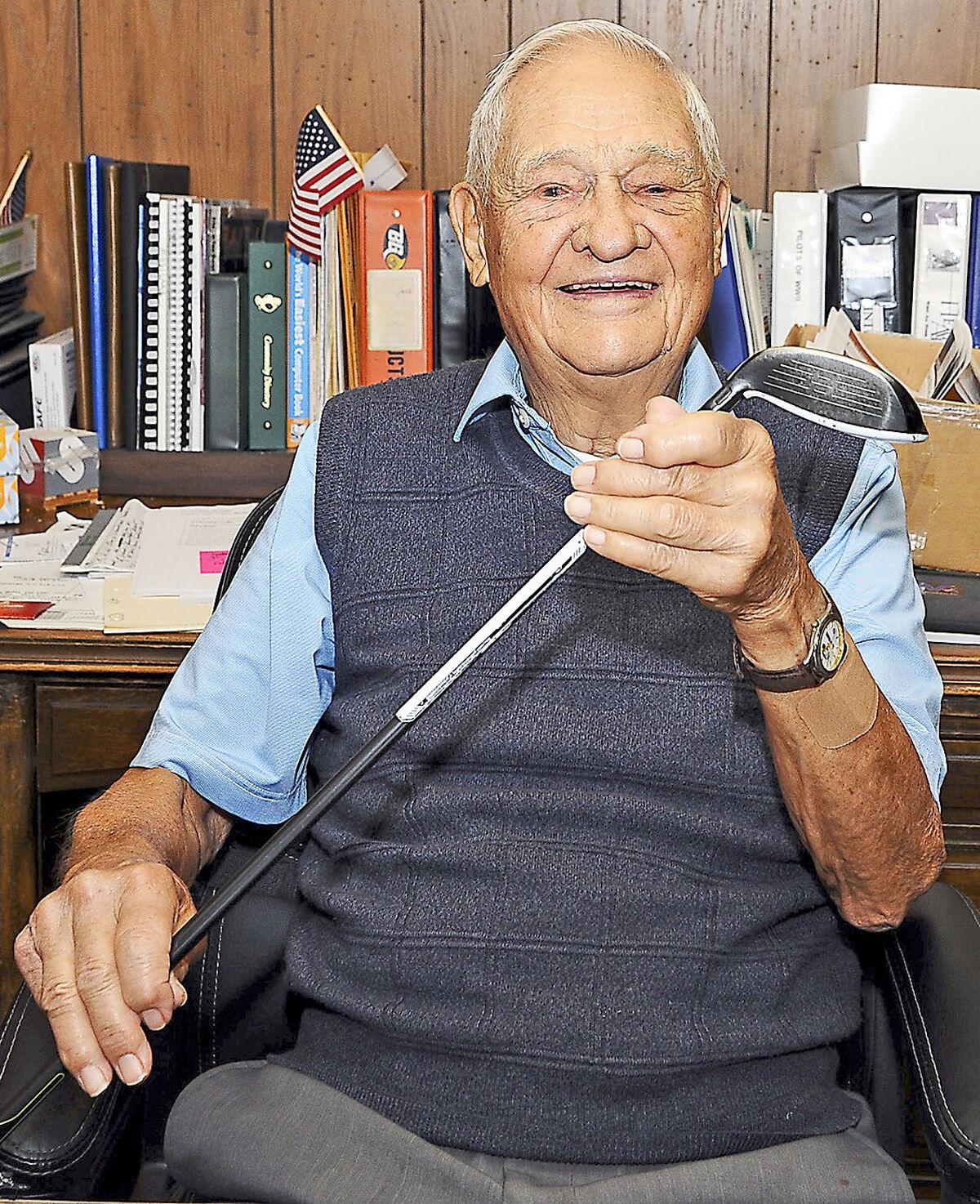 Peter Edwards has been playing golf since he was 15, when Franklin Roosevelt was in his first term as U.S. president. 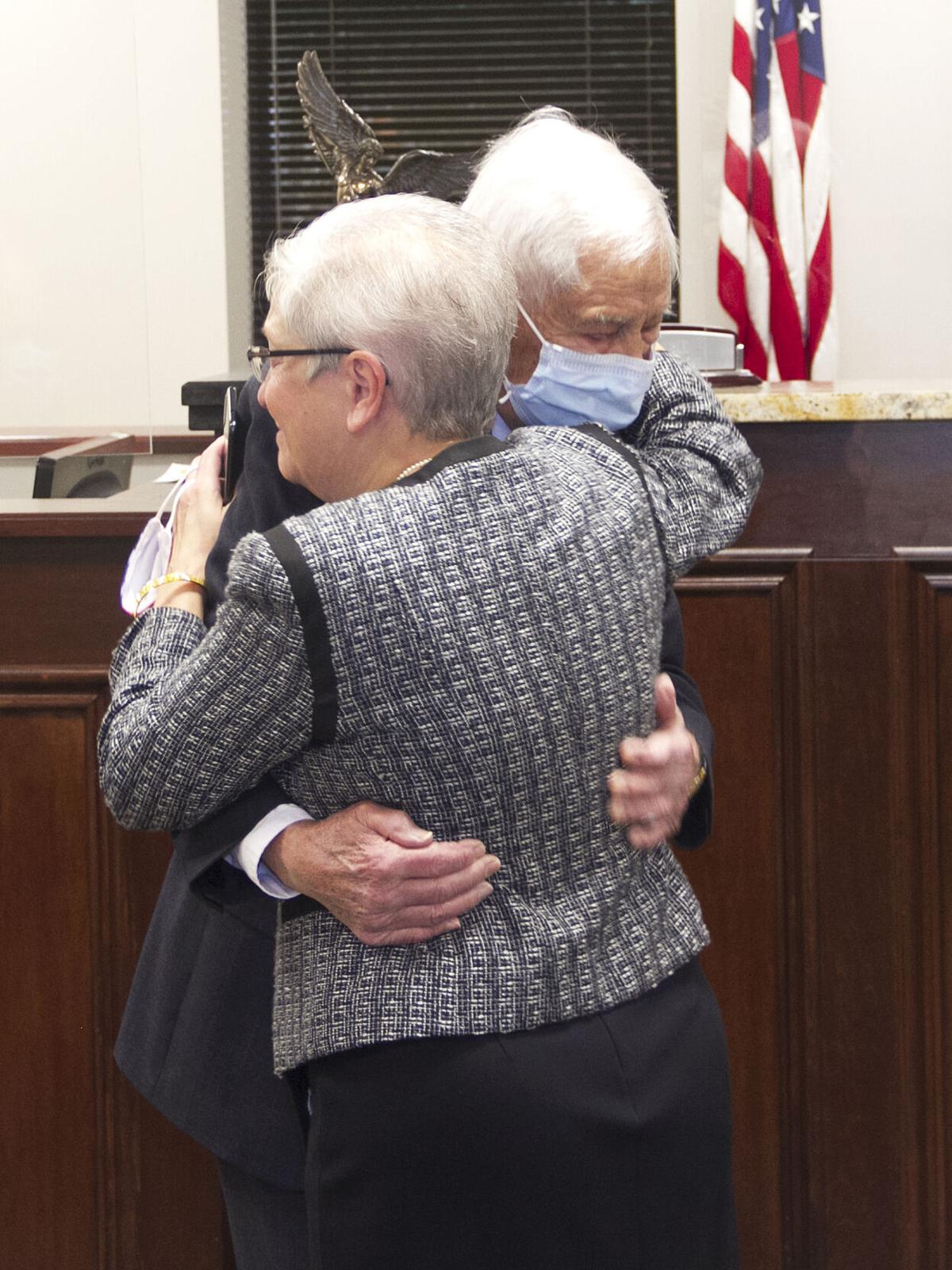 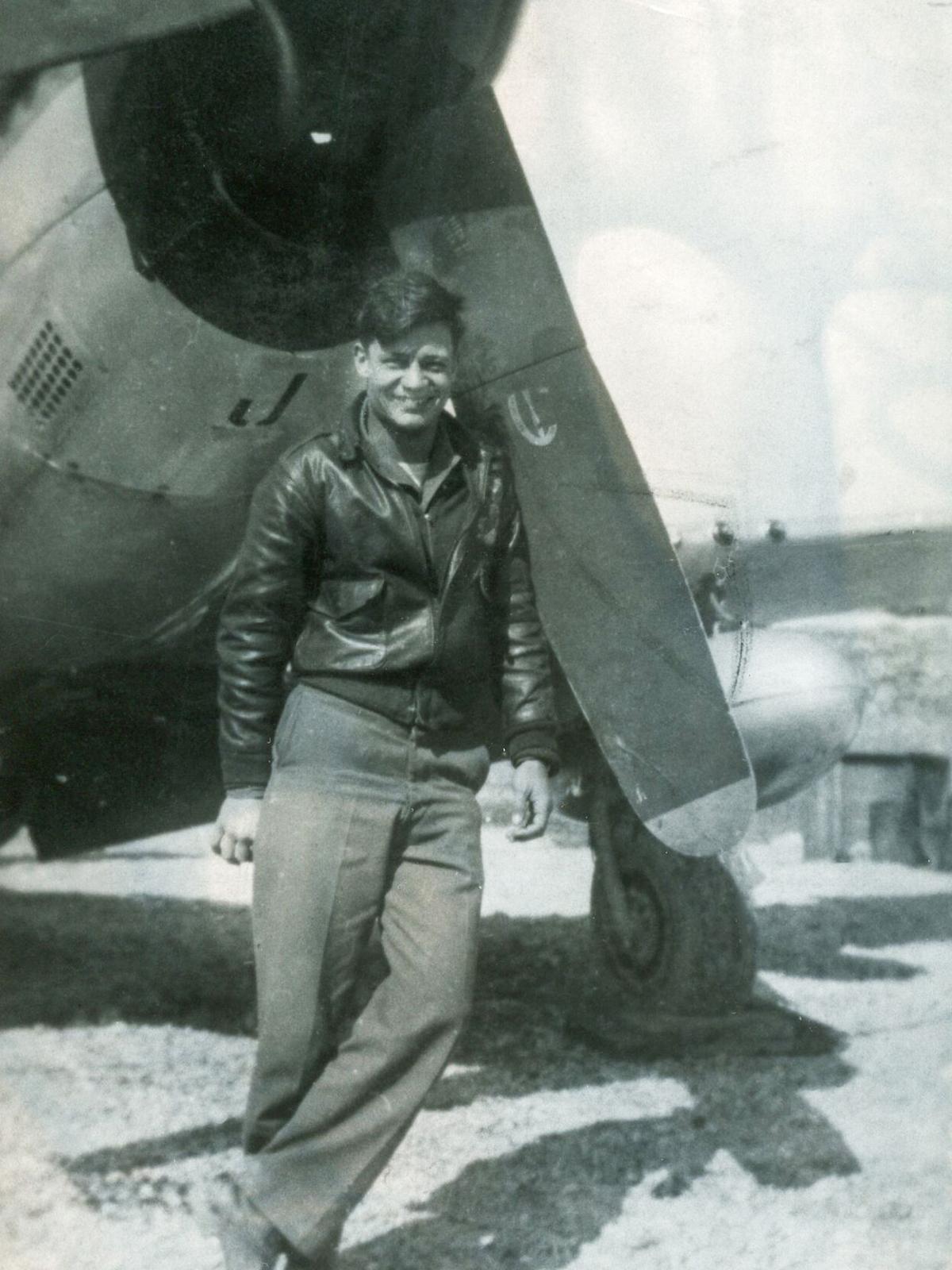 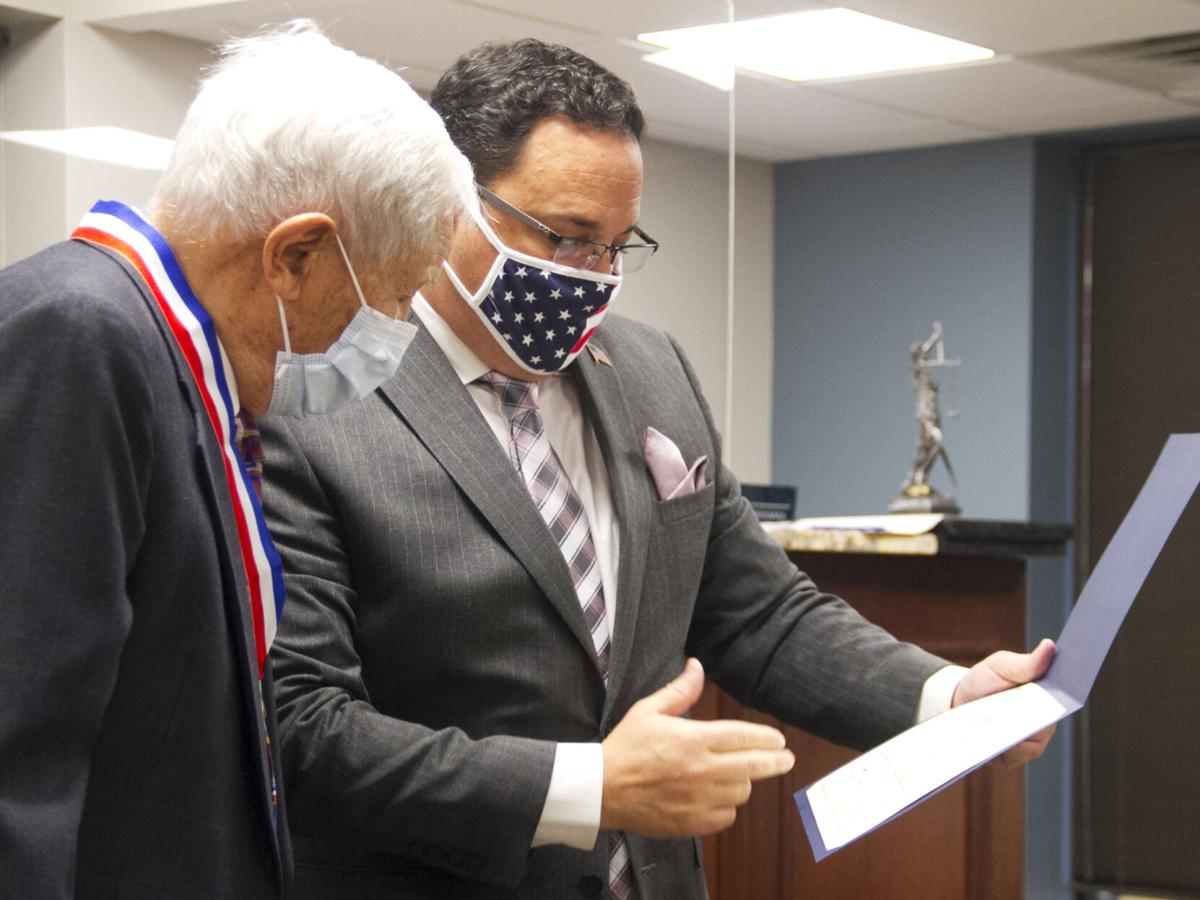 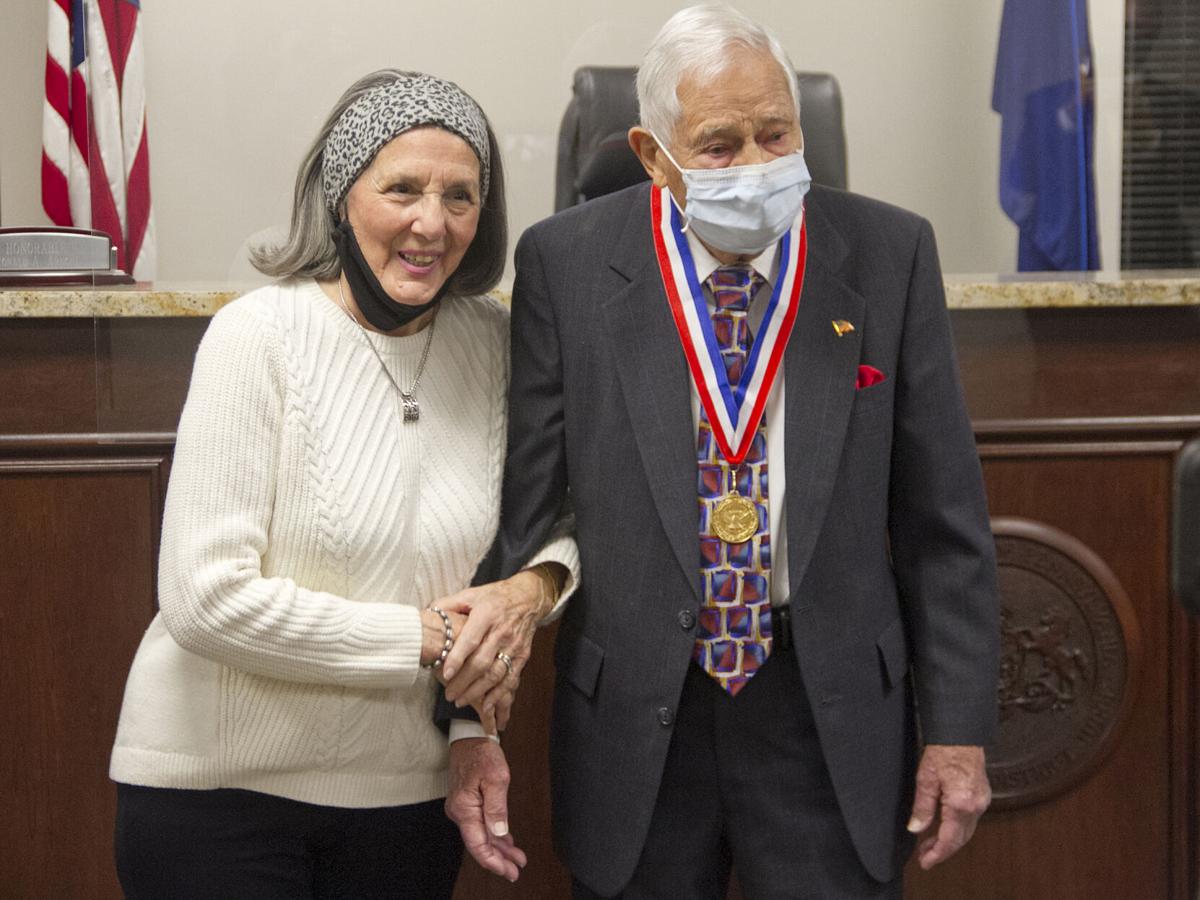 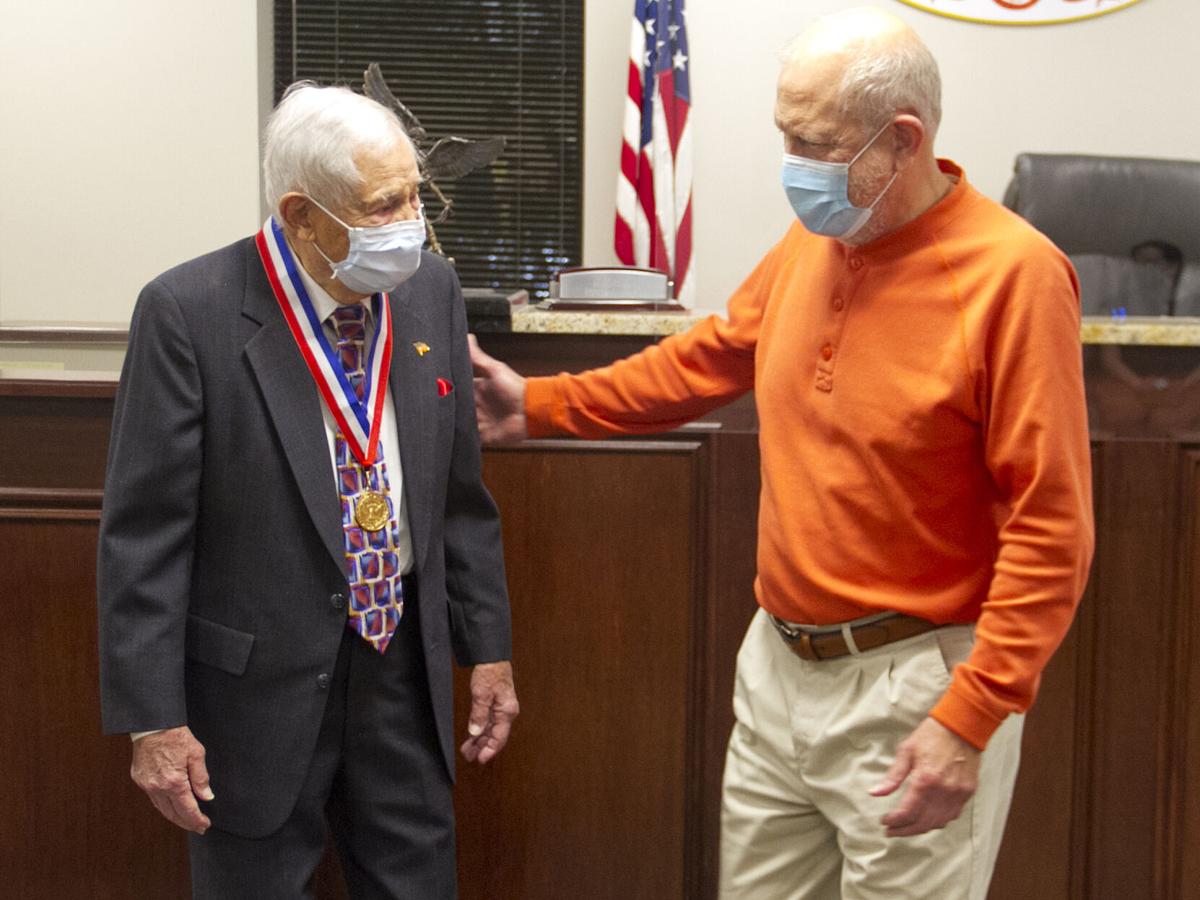 Peter Edwards Jr. is congratulated by his son Mark. 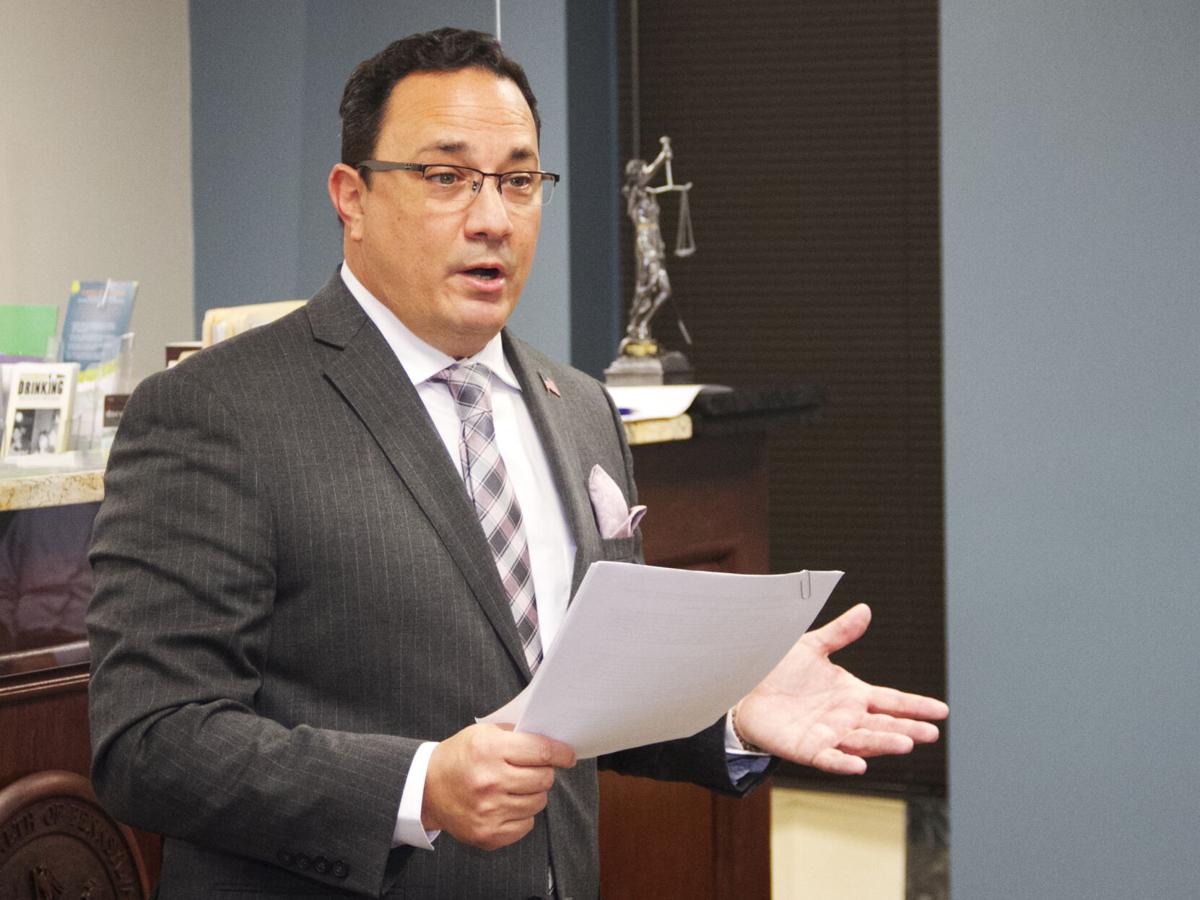 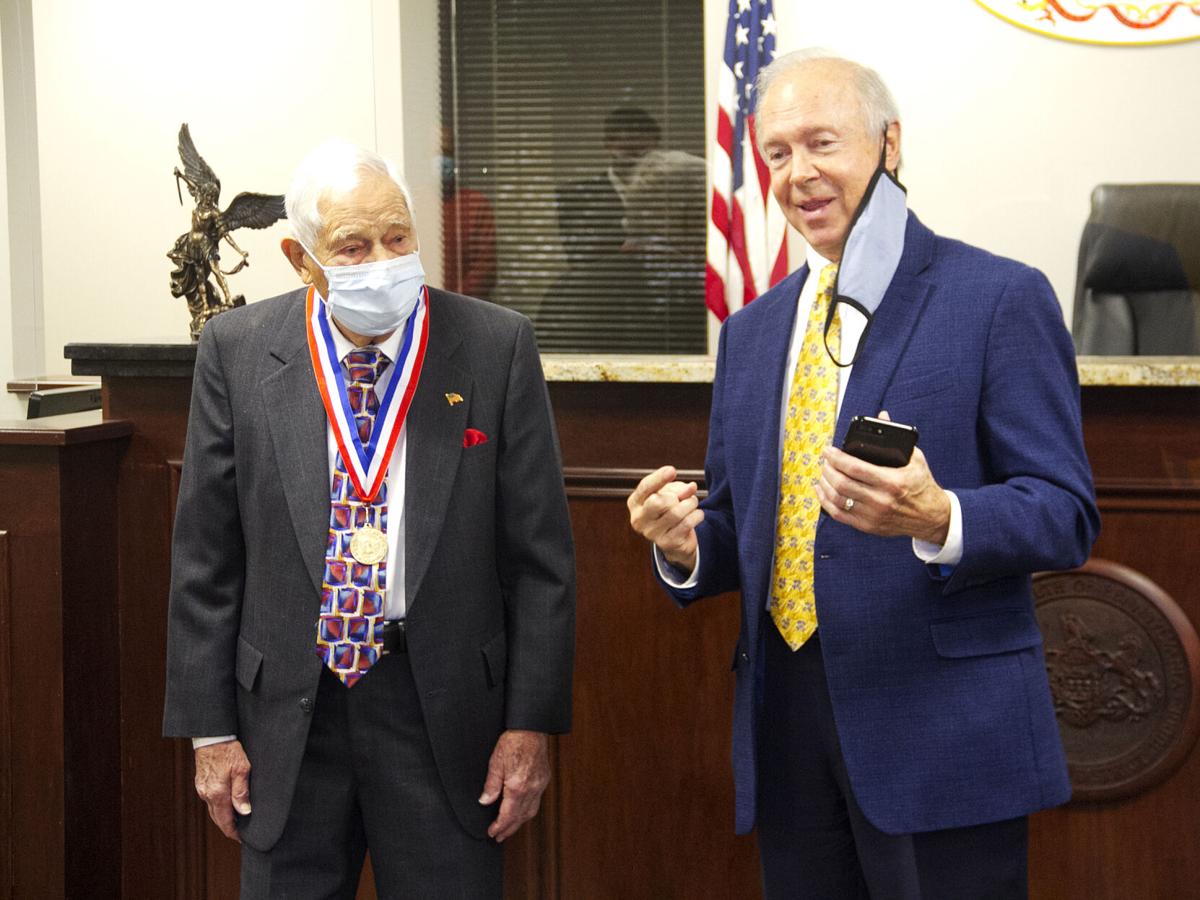 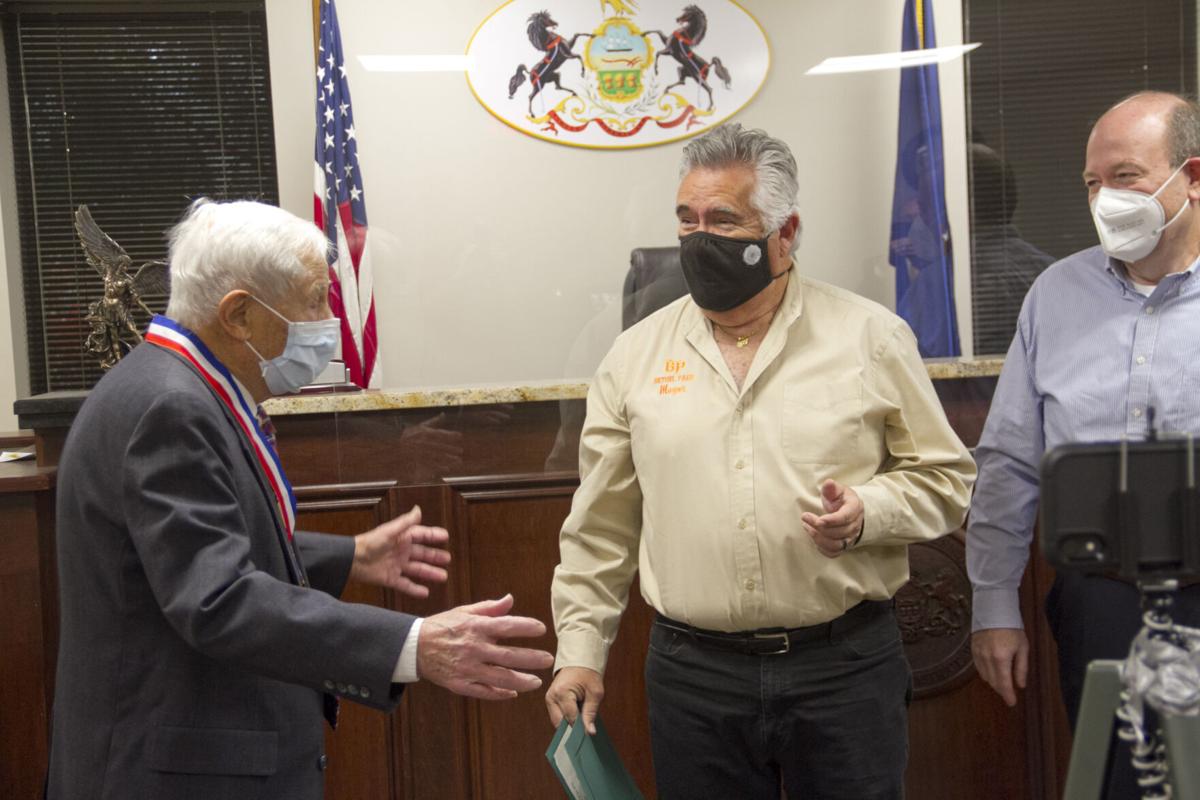 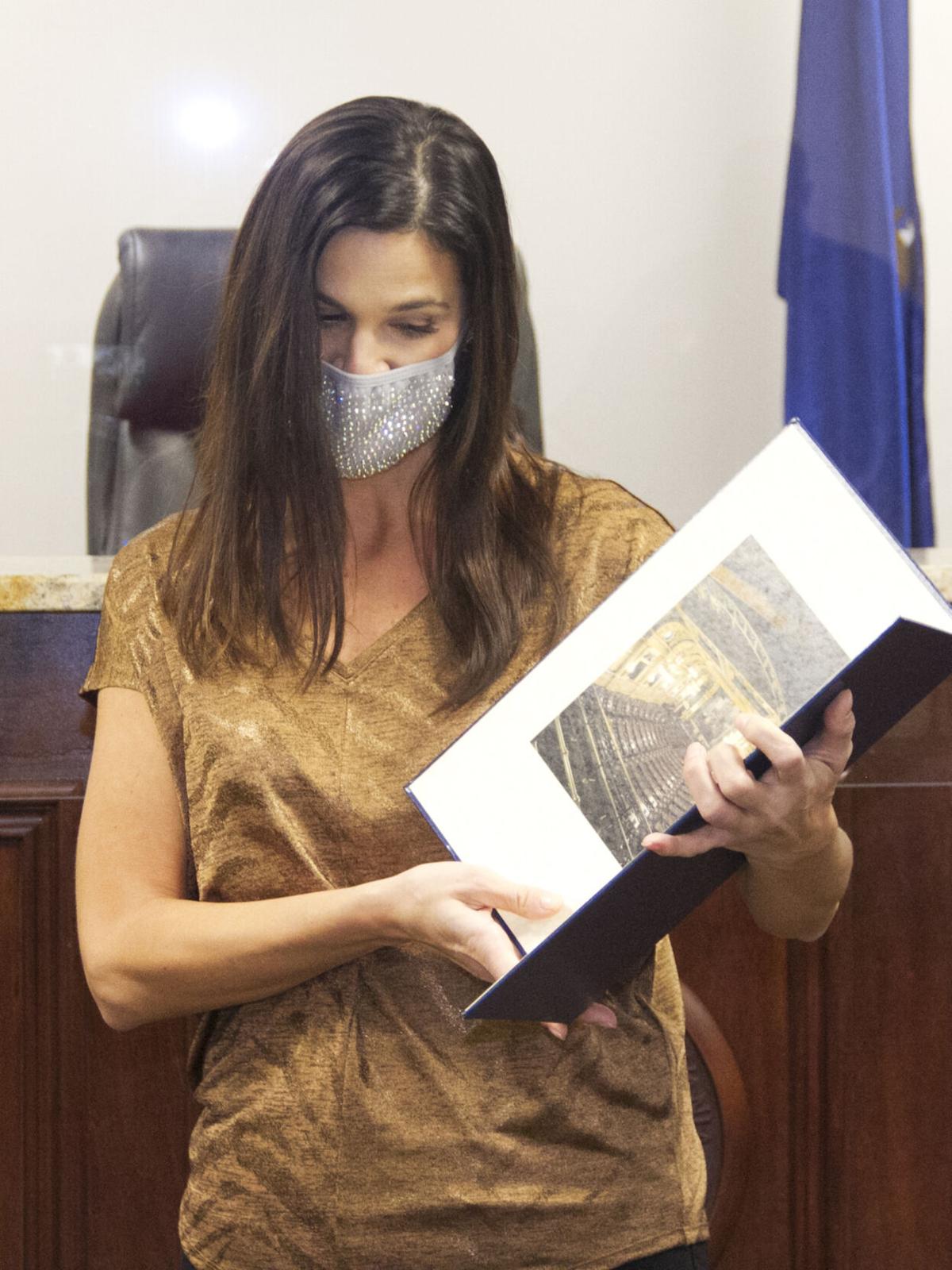 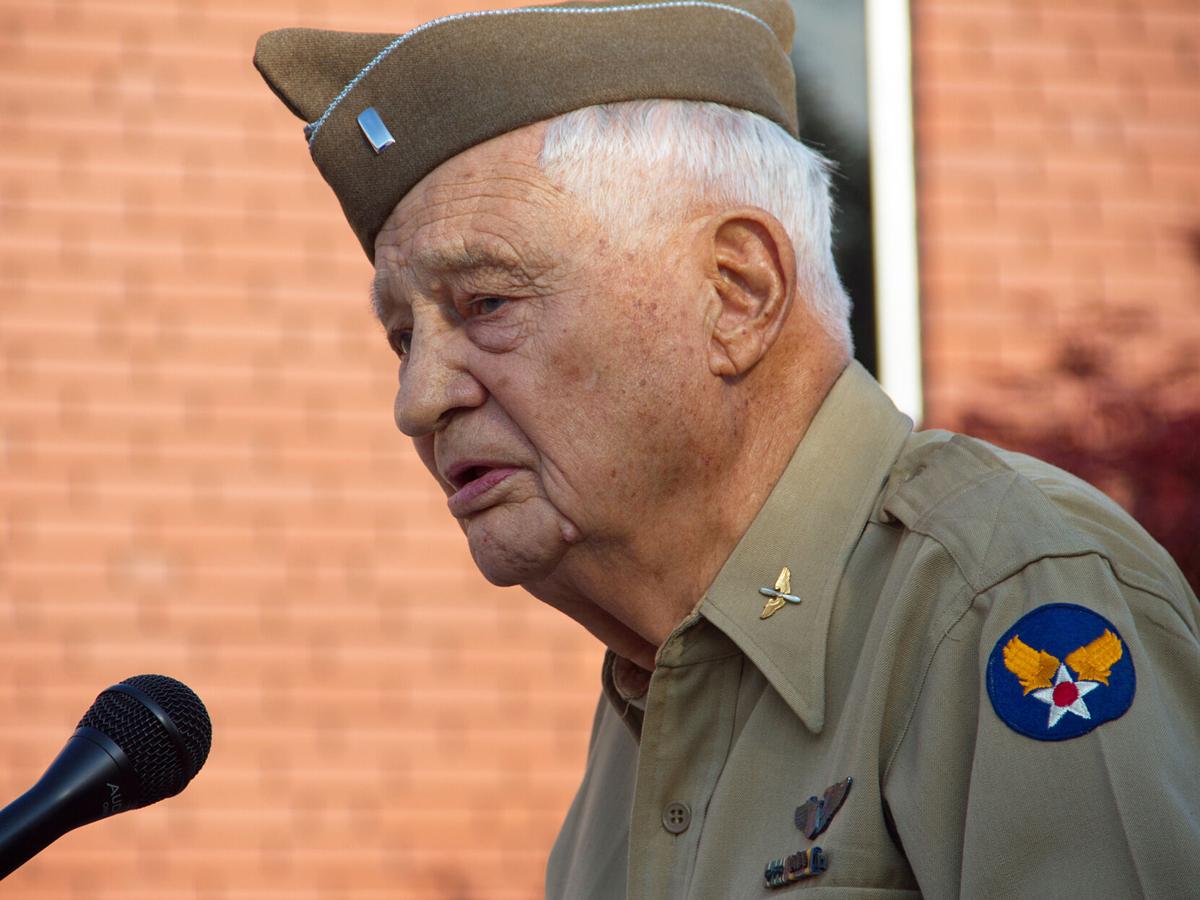 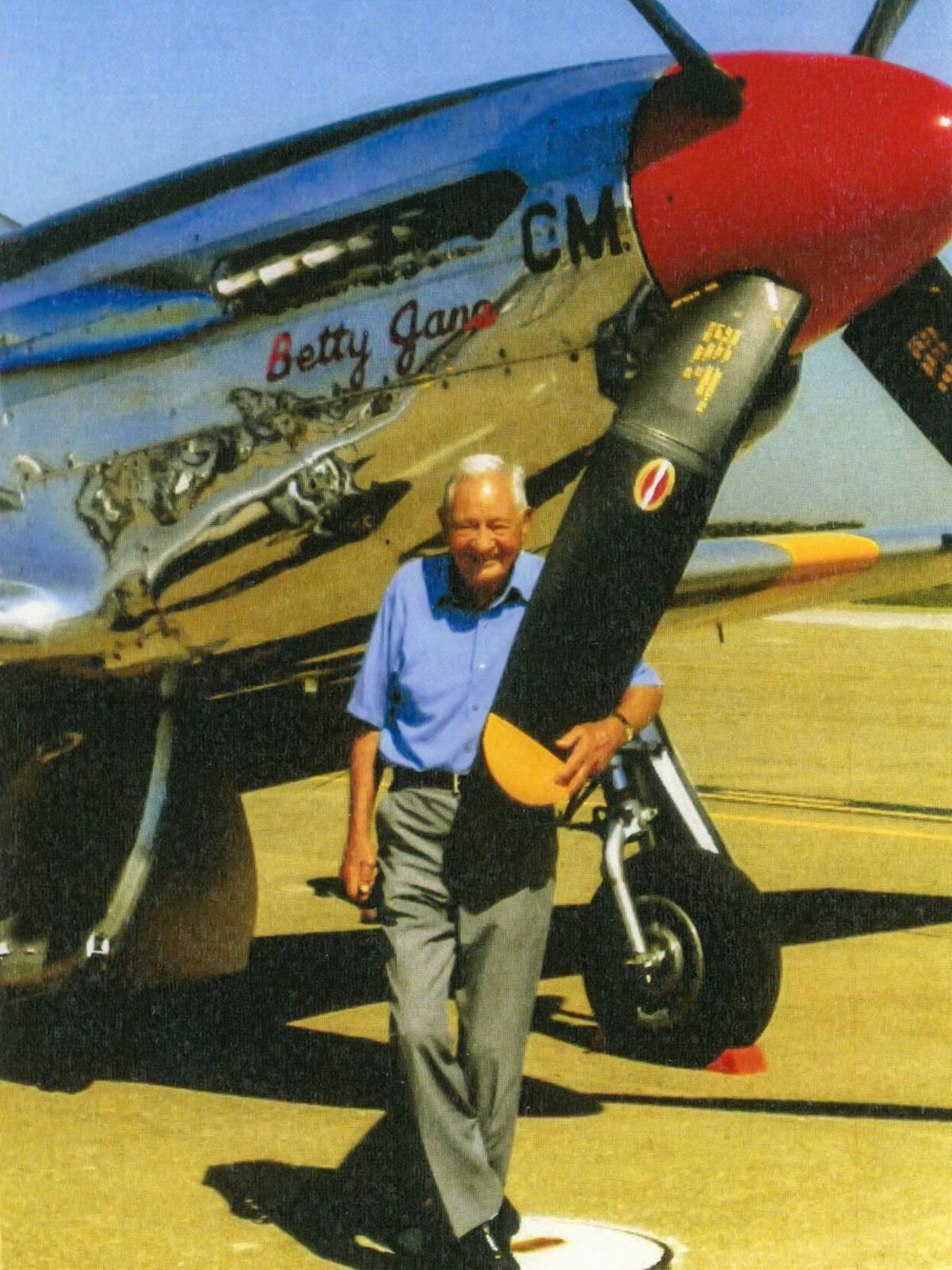 Peter Edwards Jr. with a P-51 Mustang, the type of aircraft he flew during World War II

Peter Edwards Jr., properly socially distanced from everyone, pulls down his mask to speak during the celebration of his 100th birthday at District Judge Ronald Arnoni’s office.

Peter Edwards has been playing golf since he was 15, when Franklin Roosevelt was in his first term as U.S. president.

Peter Edwards Jr. is congratulated by his son Mark.

Peter Edwards Jr. with a P-51 Mustang, the type of aircraft he flew during World War II

The secret to longevity just might have something to do with spending as much time as possible on the golf course.

If so, Peter Edwards Jr. can serve as Exhibit A.

To celebrate the occasion of his 100th birthday Jan. 2, District Judge Ronald Arnoni gathered a small group at his Bethel Park office a few days beforehand. The talk often turned to Edwards’ affinity for the sport of fairways and greens, including some applicable words from his wife, Adeline.

Yes, she does mean present tense.

Pete has shot 18-hole scores lower than his age, for example, on 103 occasions. When he was 94, he finished a game with 84 strokes. And three years later, he sank a hole-in-one on No. 5 at St. Clair Country Club.

Those kinds of performances tie right in with one of his stated goals in life, as he related during the celebration of becoming a centenarian.

“Whatever I do, I want to do the very best I can, no matter what it is,” he said.

“I want to treat people,” he added, “like people treat me.”

Apparently, that has worked out well for all involved.

“I know a lot of people in the area, and nobody has ever said one bad word about Pete Edwards,” Arnoni said.

He presented the longtime Bethel Park resident, who now lives in Peters Township, with a Lifetime Achievement Award from the Special Court Judges Association of Pennsylvania. Other honors bestowed upon Edwards were a proclamation from Bethel Park Mayor Jack Allen and a special tribute from the state House of Representatives, presented by Rep. Natalie Mihalek, R-Upper St. Clair.

Edwards’ daughter Sue Means compiled a lengthy biography of her father for Arnoni to read, covering his birth in Dormont, his family moving to what then was Bethel Township in 1926, and Pete graduating from Bethel High School in 1938. A star football player there, he is an inductee of the Bethel Park Athletic Hall of Fame.

He was attending Colgate University on Dec. 7, 1941, when word came about the Japanese attack on Pearl Harbor, Hawaii.

“Pete decided that he, at some point, wanted to join the military,” Arnoni said. “He enlisted in the Army Air Corps Aug. 12, 1942. He wanted to finish college, and he did, a little bit early, actually.”

Prior to shipping off to Europe, he married his first wife, Ruth, and they eventually had four children.

During the latter stages of World War II, Edwards flew 49 missions aboard the P-51 Mustang as a bomber escort.

“His closest call came when he was flying over Germany, over a train, and a boxcar opened up and machine gun fire rained upon his aircraft,” Arnoni said. “Interestingly enough, not a bullet hit the plane.”

After returning stateside, Edwards started his own company while working part-time for Brookside Lumber, which his father founded in 1926. Eventually, the younger Peter became Brookside’s president and chief executive officer, and he finally retired in November – yes, of 2020 – at age 99.

In the interim, he served in leadership roles for numerous community organizations in and around Bethel Park, all the while golfing with his St. Clair Country Club friends, who named in his honor an event called the Edwards Cup.

“I’ve had a wonderful, wonderful life,” he said to wrap up his birthday celebration, “even better than Jimmy Stewart.”