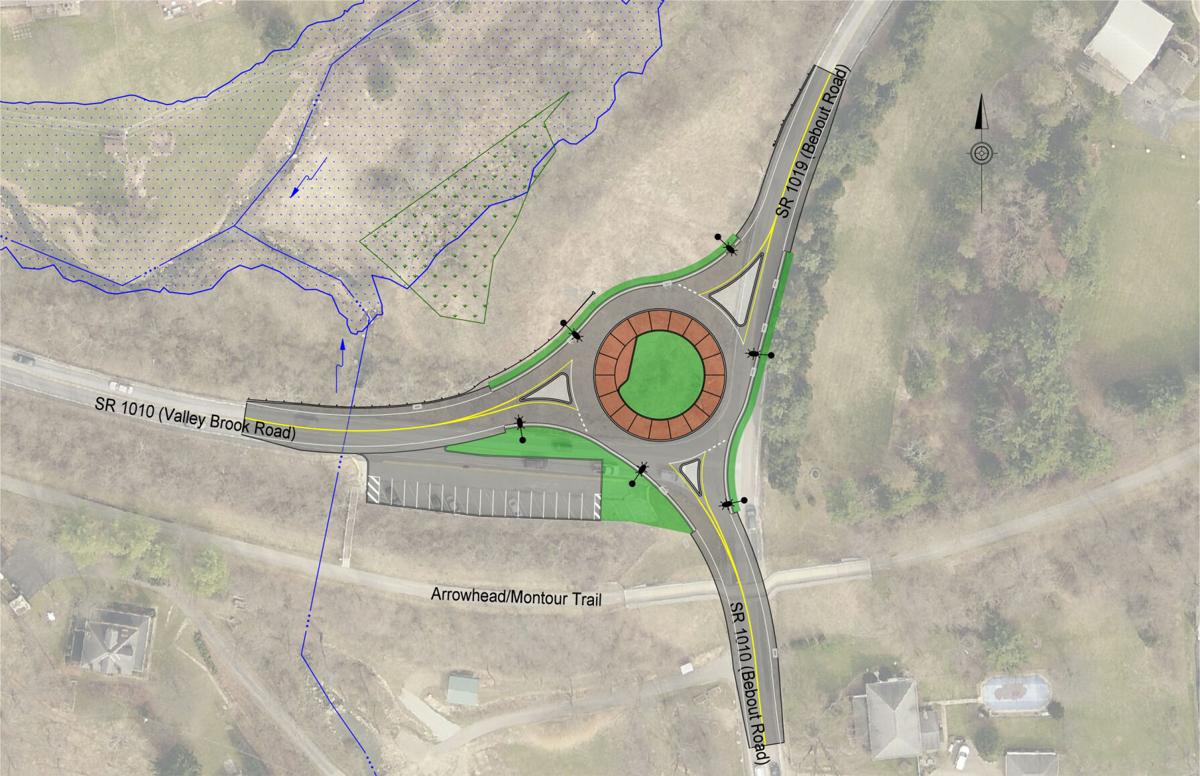 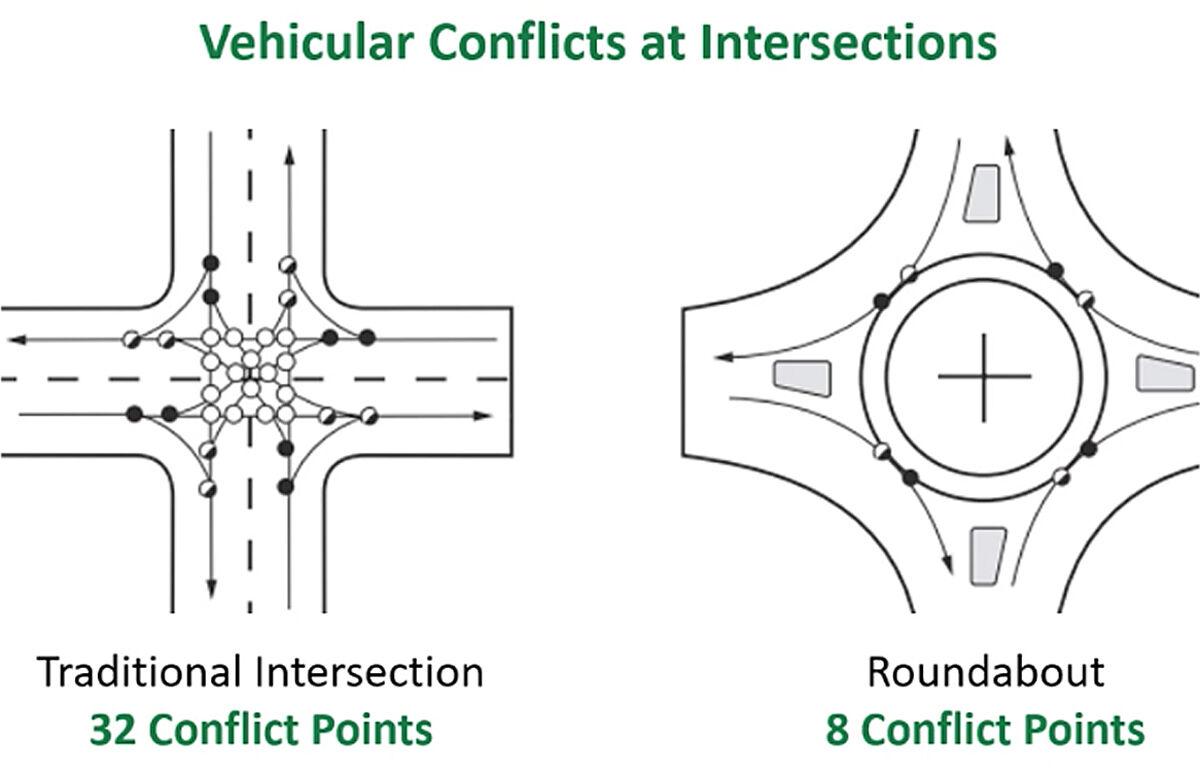 A safety factor involves the number of potential "conflict points" at intersections with traffic lights compared with roundabouts, as presented by the state Department of Transportation.

Among those presenting virtually were, from left, Andrew Thompson, Rachel Duda and Brian Svesnik.

A safety factor involves the number of potential "conflict points" at intersections with traffic lights compared with roundabouts, as presented by the state Department of Transportation.

Among those presenting virtually were, from left, Andrew Thompson, Rachel Duda and Brian Svesnik.

Some of the reaction to the proposed design for reconfiguring a Peters Township intersection prompted a request from a state Department of Transportation official.

Duda made the comment during a virtual public information session regarding plans for the point where heavily traveled Valley Brook and Bebout roads meet.

“We have used them successfully throughout our district, even dual roundabouts and two-lane roundabouts,” she said Tuesday. “This project will definitely improve the delay, level of service, capacity and safety of this intersection.”

Targeted for the 2023 construction season, the project aims to provide some measure of relief for drivers of the 11,000 vehicles that use Valley Brook daily and the 6,000 on Bebout.

PennDOT project manager Brian Svesnik discussed the process that led to the selection of a circular configuration.

“During the alternatives analysis, we had looked at widening both Valley Brook and Bebout roads to add left-turn lanes and a traffic signal,” he said, citing the cost of installing and maintaining signals as a mitigating factor.

He also cited the safety factor.

“Your crashes are limited to sideswipes, rather than head-on or T-bone collisions,” he said. “So ultimately, that’s why we went with the roundabout.”

Duda said PennDOT examined nine years’ worth of data from 22 roundabouts, “and fatalities were reduced by 100%, serious injuries by 77%, minor injuries reduced by 57%.”

Property damage did increase by 21%.

“That’s typically because people are trying to get used to using them, and there could be some sideswipes at first,” Duda said. “But the total number of crashes dropped by 21%.”

“Capacity-wise, they carry about 30% more traffic than stop-controlled intersections,” she said.

Beyond the numbers, District 12-0 officials joined representatives of consulting firms Urban Engineers and McCormick Taylor Inc. to provide an overview of the project and encourage members of the public to share comments for consideration in the drafting of a final plan.

One aspect is to improve access to a parking lot off Valley Brook Road for users of the Arrowhead Trail, which crosses Bebout Road by bridge just south of the intersection.

“We did maintain the same number of parking spots from the existing to the proposed,” said Andrew Thompson of Urban Engineers.

He also spoke about how construction could proceed in terms of relative disruption to traffic.

“One of the benefits of having a full detour, with us shutting down the entire and detouring people around it, would be that it’d shorten the construction timeline,” he said.

The alternative would be “closing one leg of the intersection and at a time, then detouring traffic around it,” Thompson said. “This requires a slightly longer construction timeline. It would still be within one season. But it has the benefit of being less impact to the traveling public, as well as emergency services.”

He stressed that no decision in that regard has been made yet.

“We just want to make it clear to the public, and if they have any input about desired detour, we’d love to hear from you.”

For more information and to access a video of the virtual presentation, visit www.peterstownship.com and click on “Details and Meeting Link.” Brian Svesnik can be contacted at bsvesnik@pa.gov or 724-415-2400.