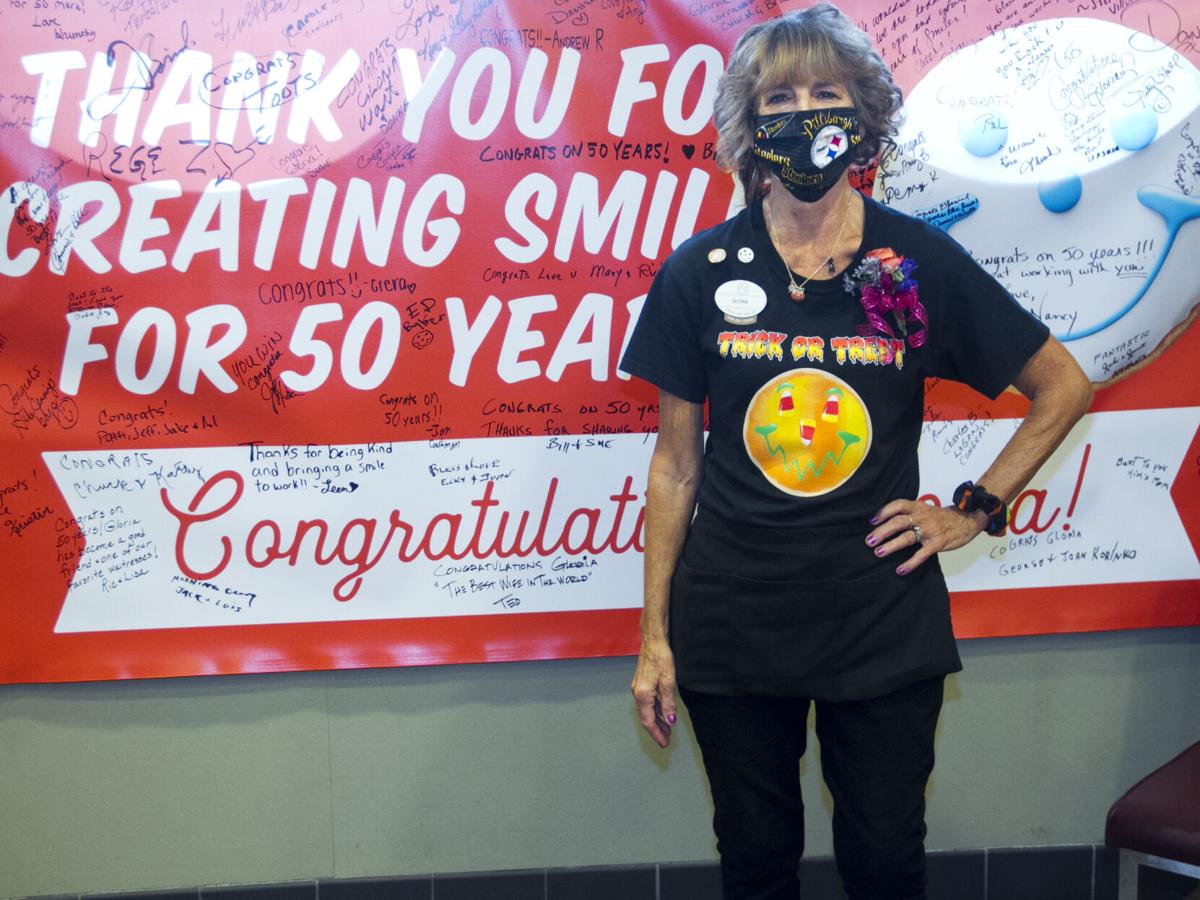 A banner in the lobby of Eat’n Park on Route 88 in Bethel Park celebrates Gloria Rack’s golden anniversary at the restaurant. 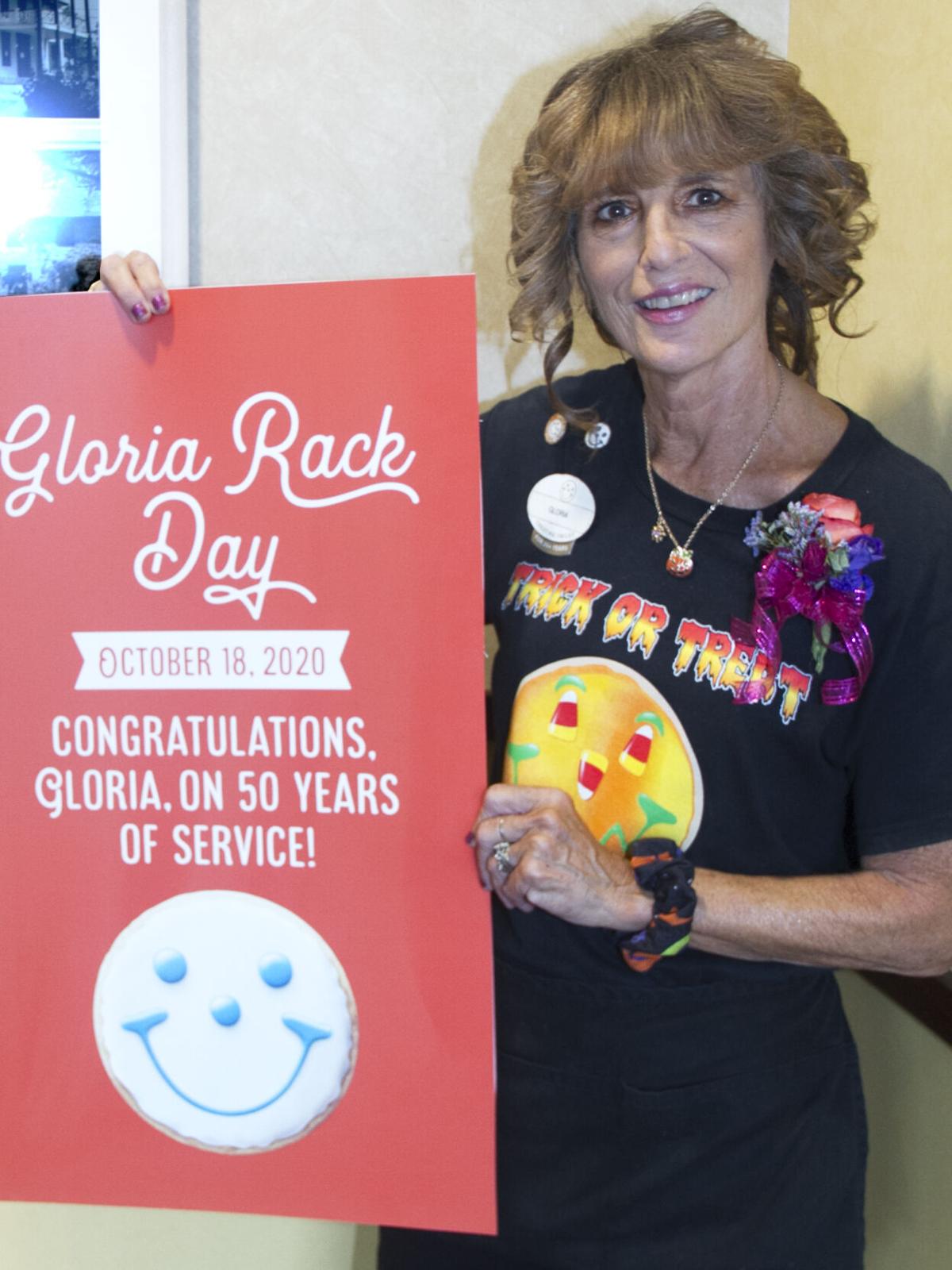 A banner in the lobby of Eat’n Park on Route 88 in Bethel Park celebrates Gloria Rack’s golden anniversary at the restaurant.

Some people look their age.

As a 17-year-old Bethel Park High School senior, she went to work at a local restaurant on Route 88. On Oct. 18, Eat’n Park celebrated 50 years of her employment, and customers must have been doing double takes after they did the math.

But yes, she has been a mainstay at the restaurant since tagging along with one of her friends.

“She left an ink pen in a shirt at the cleaners, so she got fired and says, ‘Gloria, I have to go get a job,’” Rack recalled. “And I came down here and I started working with her.”

They were carhops, primarily taking trays of food and drinks to customers’ vehicles, with some not-so-scintillating duties in addition.

“We used to have to sweep the whole lot at night,” Rack said, and that included the winter. “I used to go home with frostbite, and my dad would say, ‘You’re not working there anymore,’ because my feet would be frozen, because we just wore miniskirts.”

These days, she keeps nice and warm while serving diners inside Eat’n Park’s comparatively new Route 88 restaurant, which opened in 2016. She has built a loyal customer base and, in turn, has displayed an impressive degree of loyalty as an employee.

“In all the years I’ve worked with Gloria, she’s never missed a day. She never calls off,” Donald Sypolt, her general manager, said. “Back when the restaurant was open late at night, sometimes they had a tough time getting midnight help. She’d walk over and work a few hours to help the restaurant, and stay for her shift in the morning because all the regulars were coming in.”

She and her husband – Ted is a graduate of nearby South Park High School and the owner of Rack Signs and Awnings – live pretty much right around the corner from Eat’n Park, where she has become something of a legend not only for her longevity, but her largess.

“She’s been one of our single biggest supporters of our annual Children’s Hospital campaign, Caring for Kids,” Trina DeMarco, director of corporate communications and community partnerships, said. “Gloria has raised tens of thousands of dollars, and this restaurant is always one of our top money raisers.”

Much of the money is raised through chances on new vehicles, and Rack has done wonders with that.

“I’d come down at night when I wasn’t working, and I would go through the whole dining room and sell the raffle tickets,” she said, plus her regular customers always are eager to support the cause that was launched in 1979 to benefit what then was called the Children’s Hospital Free Care Fund.

“I remember it was a Lincoln Town Car the first year,” Rack said about a particularly enticing prize, “and somebody won a Buick with the winning ticket I sold one year.”

With the COVID-19 pandemic affecting the operation of businesses everywhere, the viability of the 2020 campaign has been questioned. But DeMarco provided it would occur again.

“It’s happening this year,” she said. “It’s going to look different, but Caring for Kids is going to happen.”

Rack is sure to do her part, and in the meantime, she is glad to be serving her customers again following the restaurant’s temporary closure. And she certainly is appreciative of all the congratulations she has received for her 50th anniversary, although the occasion also has prompted plenty of questions.