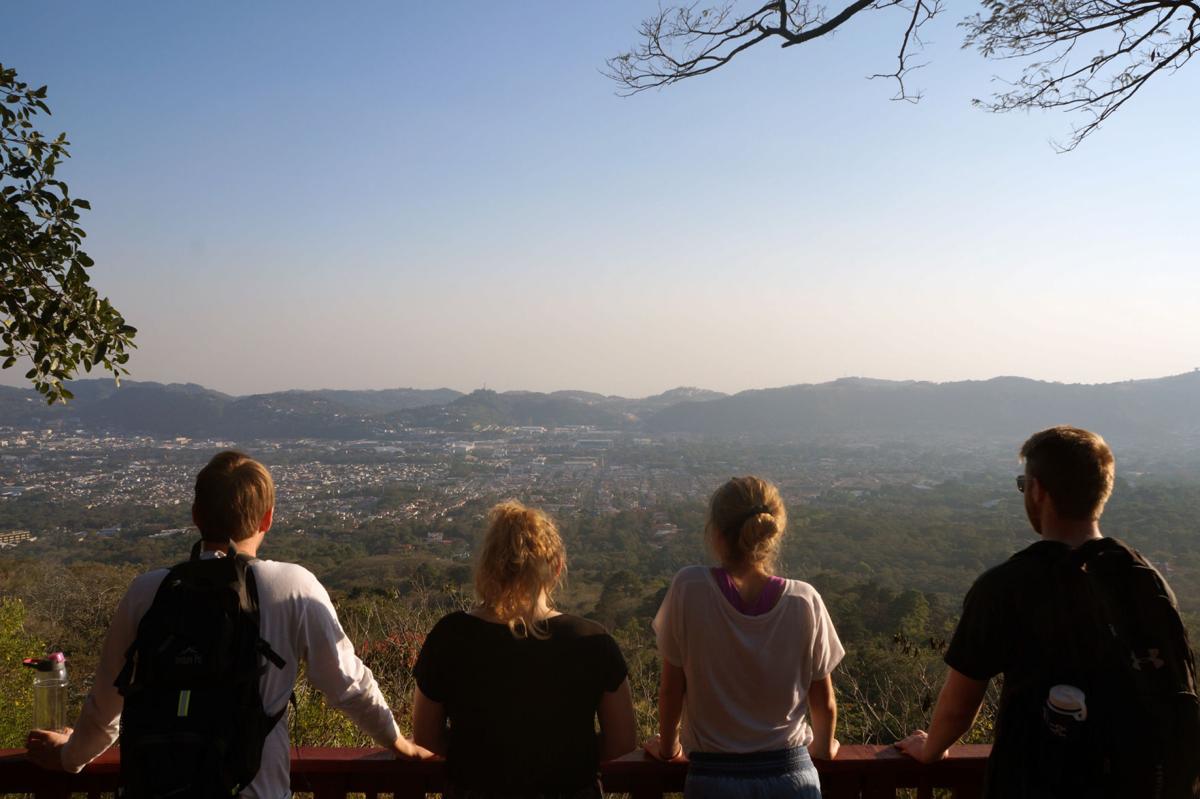 Visitors from John Carroll University get a picturesque view of San Salvador, the capital of El Salvador. 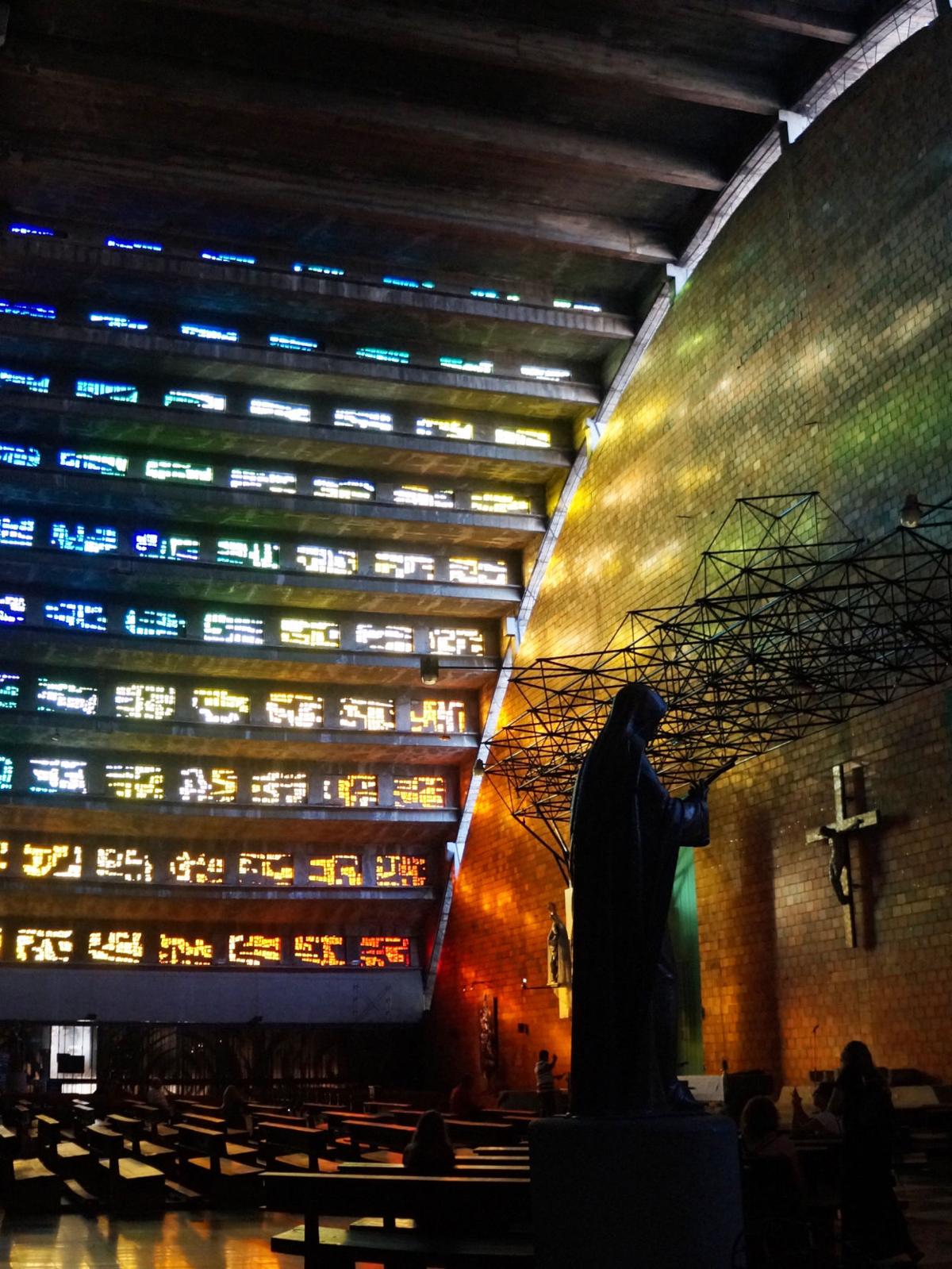 View inside the Iglesia el Rosario in San Salvador, a church created in 1971 by artist and architect Rubén Martinez and now a prime El Salvador attraction 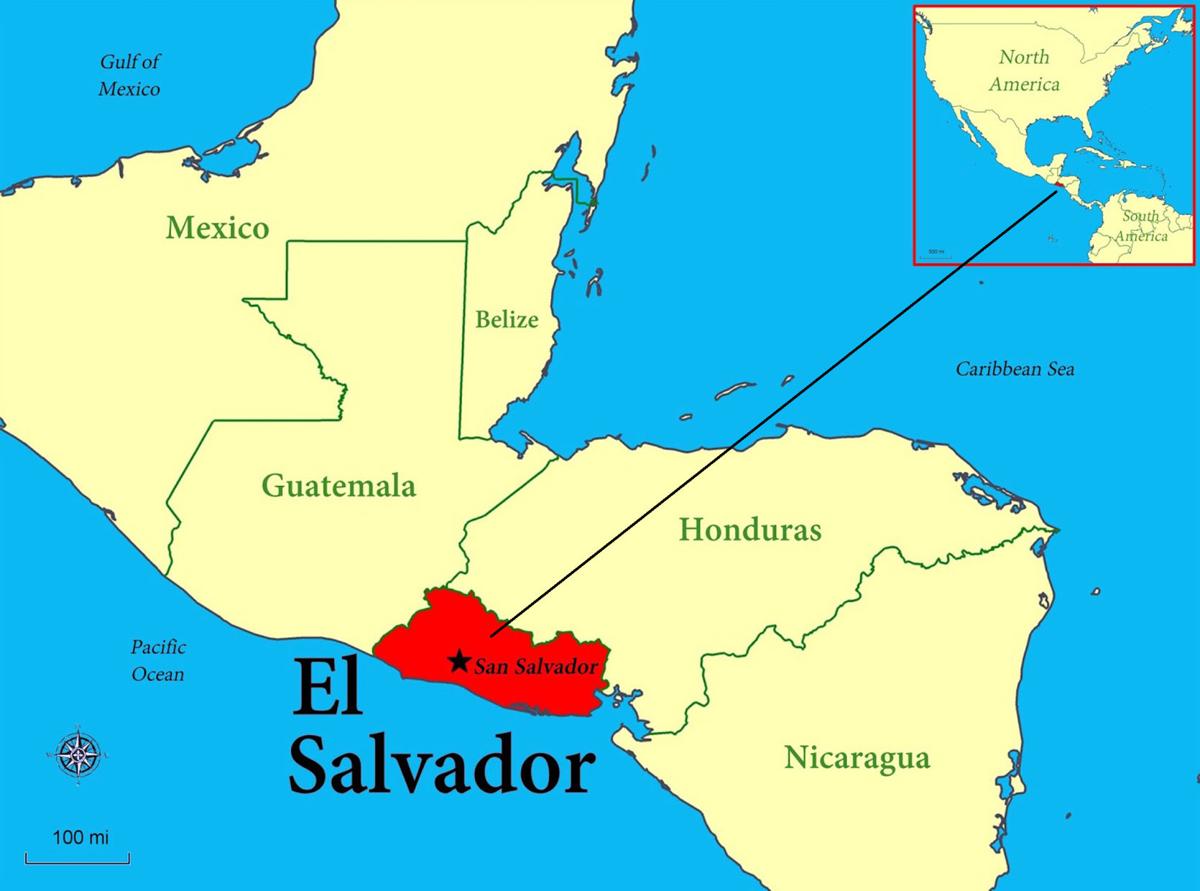 Students on the Campus Ministry Immersion Experience Program’s trip to El Salvador stand for a group photo in front of an example of local culture. 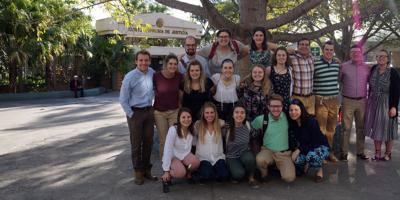 And so a group of John Carroll University students visiting the tiny Central American nation in early January were lacking their usual lines of communication, and as such were unaware of the latest happenings back home.

“We saw a newspaper as we were in the grocery store with Donald Trump’s face blown up,” sophomore Julie Booth recalled. “Our translator read us the article, and at least personally, I was enraged. I have always been proud that I’m an American, and in that moment, I immediately felt embarrassed and ashamed.”

The article, of course, ran in the wake of the disparaging, vulgar language attributed to the U.S. president about the relative merits of certain countries, El Salvador chief among them.

Booth, a 2016 Mt. Lebanon High School graduate who was taking part in John Carroll’s Campus Ministry Immersion Experience Program, found a much different environment than what such commentary would suggest.

“We obviously stuck out. We were these pasty white kids walking around gleaming in the sun,” she admitted. “And every person that we met, there was so much love in them. They wanted to get to know us. They wanted to know why we were in their country, and they would thank us for coming down and wanting to learn about their culture.

“The fact that someone like our president can be so close-minded to that is such a hard pill to swallow,” Booth continued, “and also that so many people think that way. And we can do all we want to try to change it, but it might not work the way we want it to.”

Her path to El Salvador began last spring, when she applied for the immersion program, through which students travel to domestic and international locations where they are exposed to issues of poverty and injustice.

“Ever since, I think, my junior year of high school, I really started understanding that people are not treated fairly in the world,” Booth said. “Beneath it all, we are all the same people, and I know that sounds so cliché. But everyone has the same wants and desires when you get to the root of it.”

Based on her interest in addressing social justice, she was assigned to the group traveling to continental North America’s smallest nation, covering an area about one-sixth of the size of Pennsylvania. It is also among the countries with the highest murder rate.

“I knew where El Salvador was, but I hadn’t really heard that much about it,” Booth recalled. “So when I started doing research and seeing about the violence, I honestly was a little scared. I was questioning whether it would be safe for me to go.

As part of her research, she read about Archbishop Óscar Arnulfo Romero y Galdámez and his attempts to help oppressed and marginalized Salvadorans overcome their circumstances. His assassination while celebrating Mass in 1980 instigated a 12-year civil war that basically solved nothing.

“One of the most interesting things that I learned when I was down there is that even 25 years after the war, there’s still that extreme divide between the wealthy and the poor, and people not having a voice,” Booth said.

Efforts toward change, though, continue today with organizations such as Christians for Peace in El Salvador, John Carroll’s community partner that made arrangements for the scholars during their 10-day stay and provided the translator.

The organization’s primary mission is to research and investigate migrants who were killed or disappeared en route to the United States, working to “try to get the remains of Salvadorans back to El Salvador so that the families can have some kind of peace,” Booth explained. “That was very difficult for me to hear.”

A component of the immersion program is for students to get together following the trip and share perspectives.

A study trip to Arizona gave sophomore Fabi Shipley a firsthand look at life and death where the two countries meet.

“One of the girls in our group said that she went down to El Salvador supporting Trump’s ideas, and that we should build the wall,” Booth said about the multibillion-dollar proposal for the U.S.-Mexico border. “And then she came back, and her views are 180. She has completely changed.

“That really struck me: What if everyone who feels that way would go somewhere and see, oh, these people are loving people?”