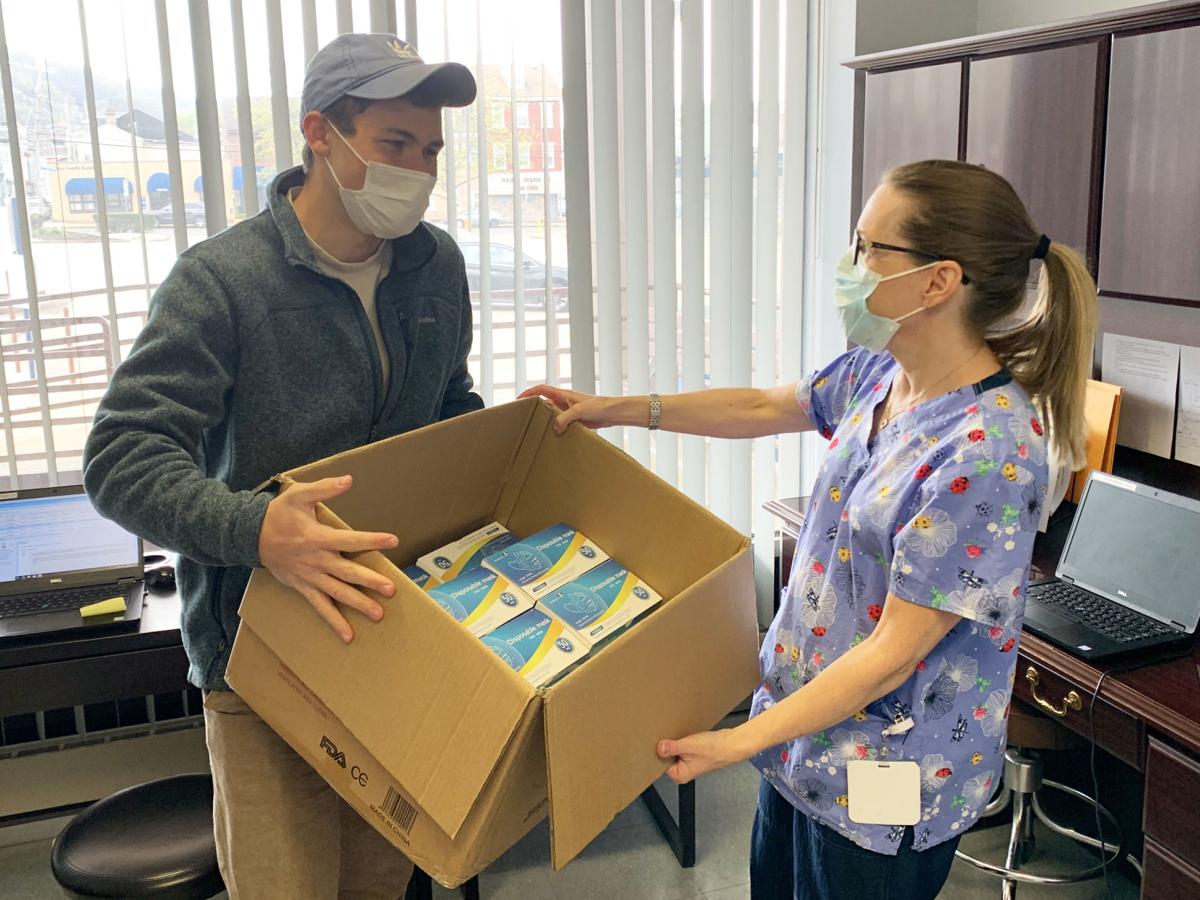 Ezra Gershanok delivers masks to the Birmingham Free Clinic in Pittsburgh’s South Side. 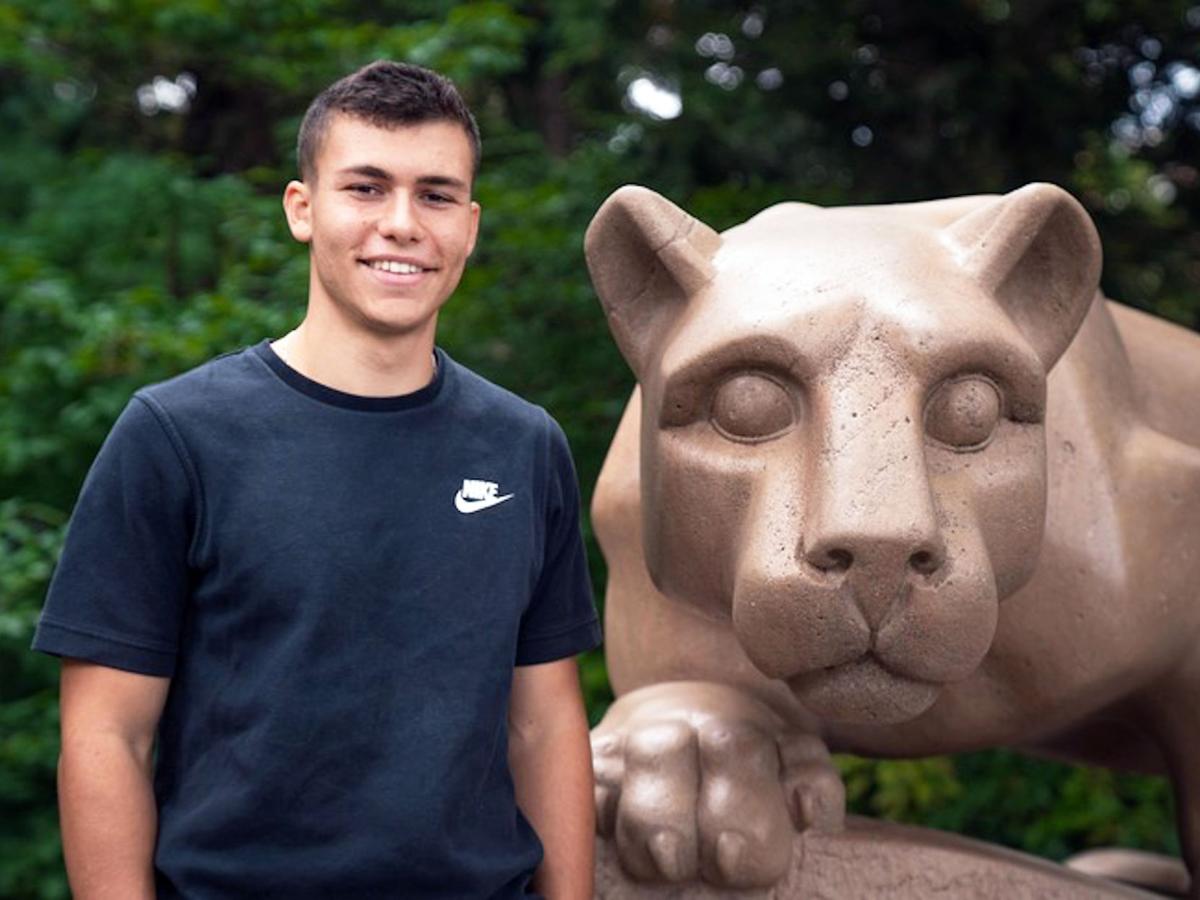 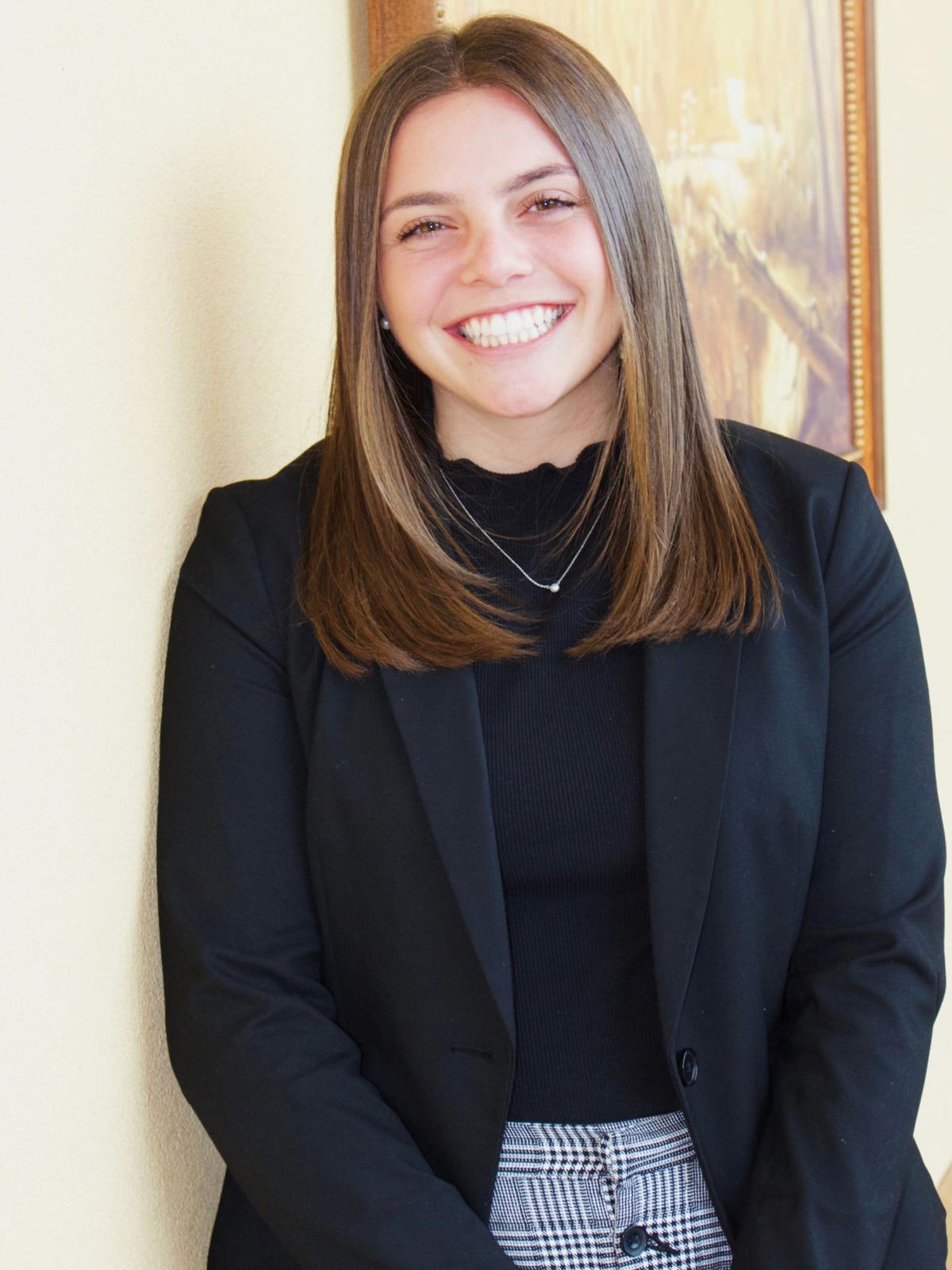 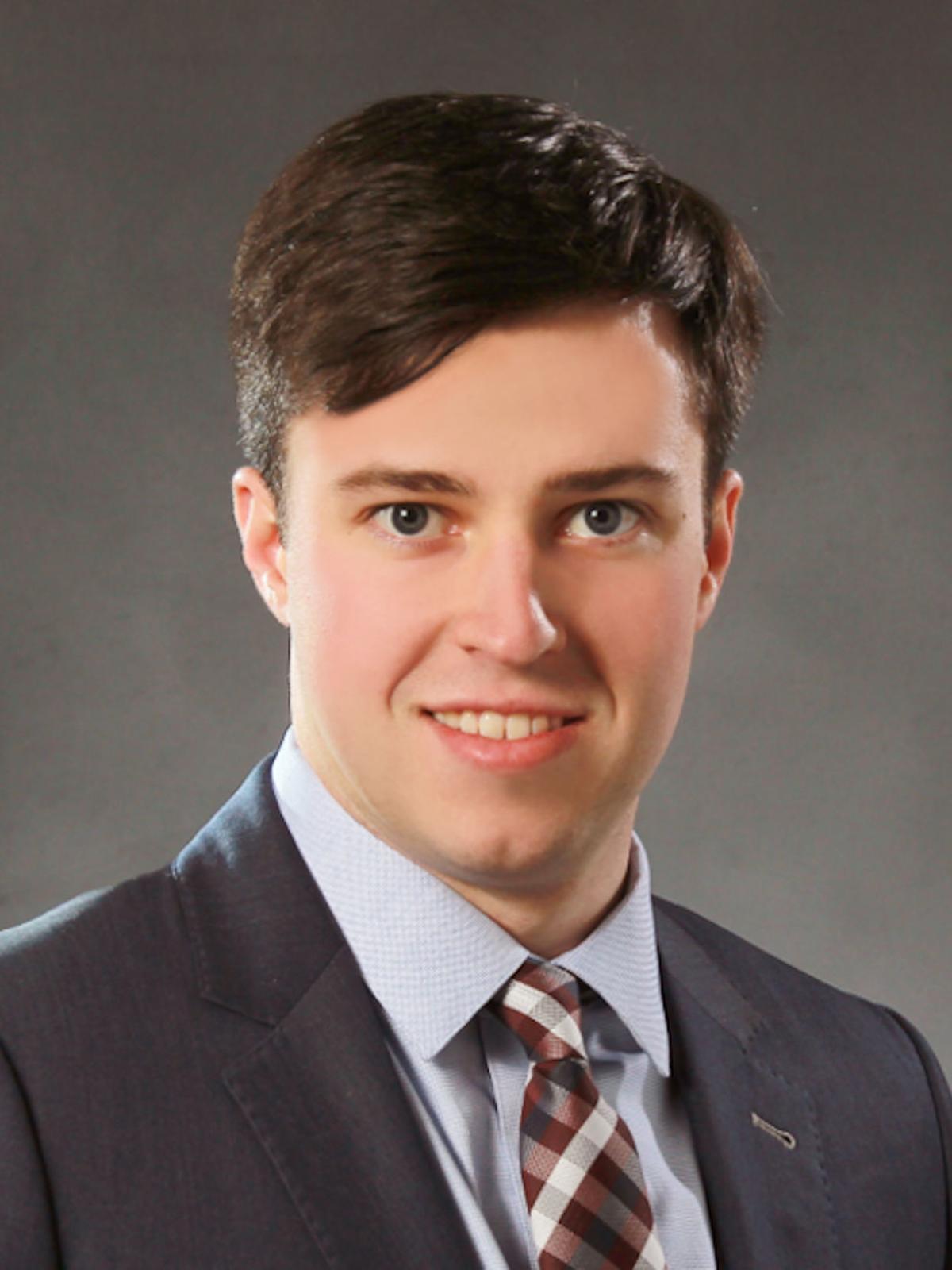 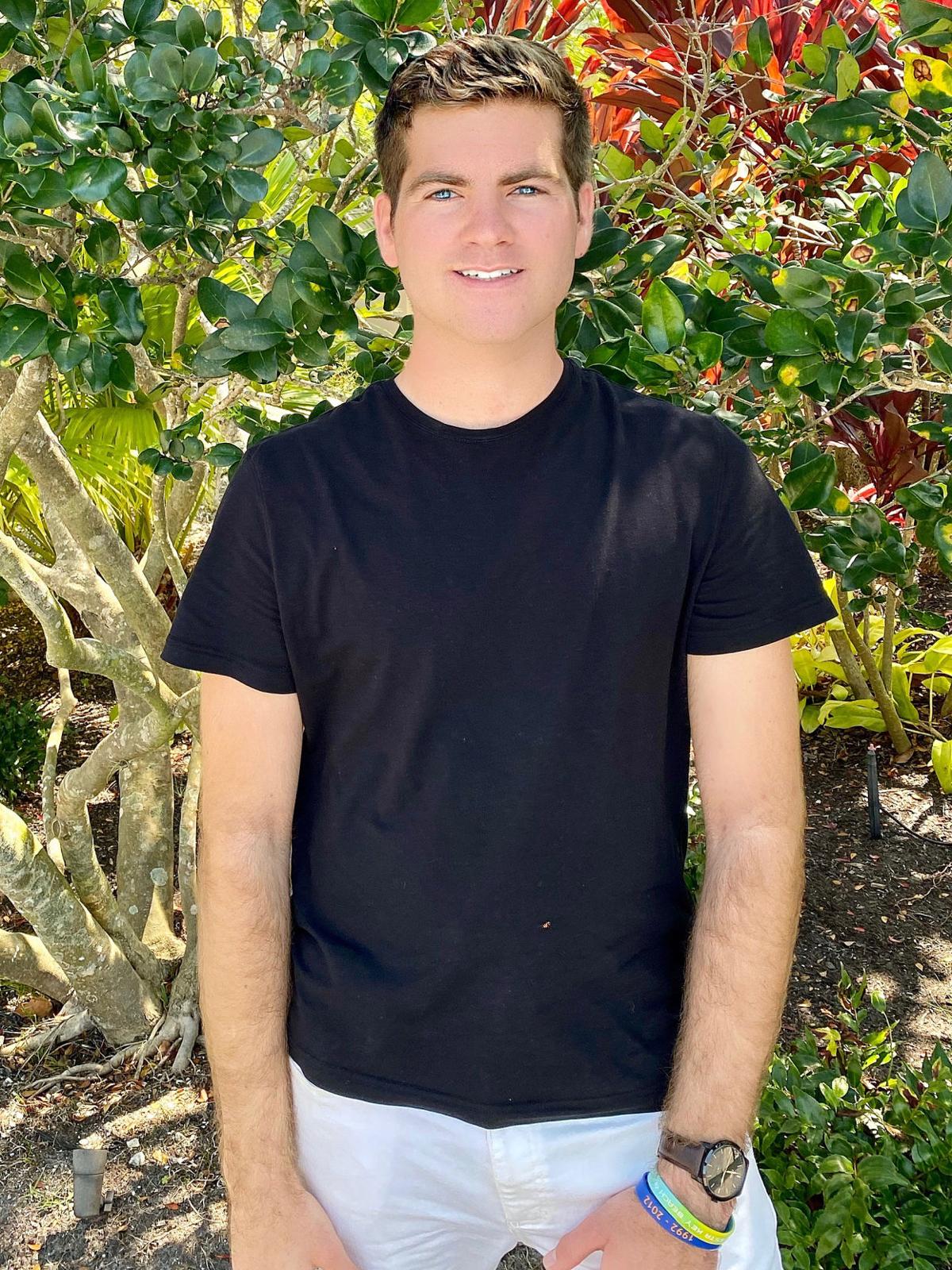 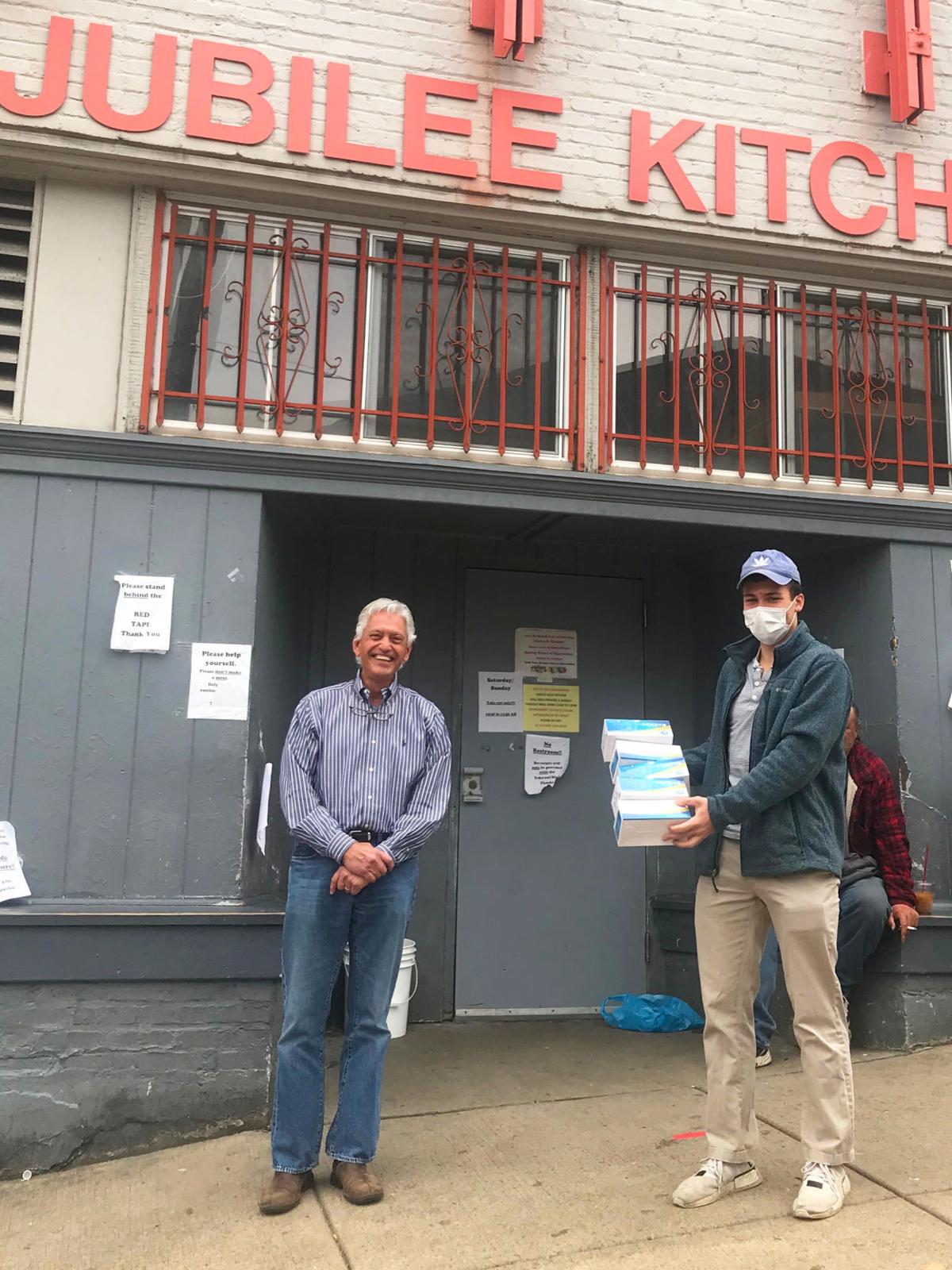 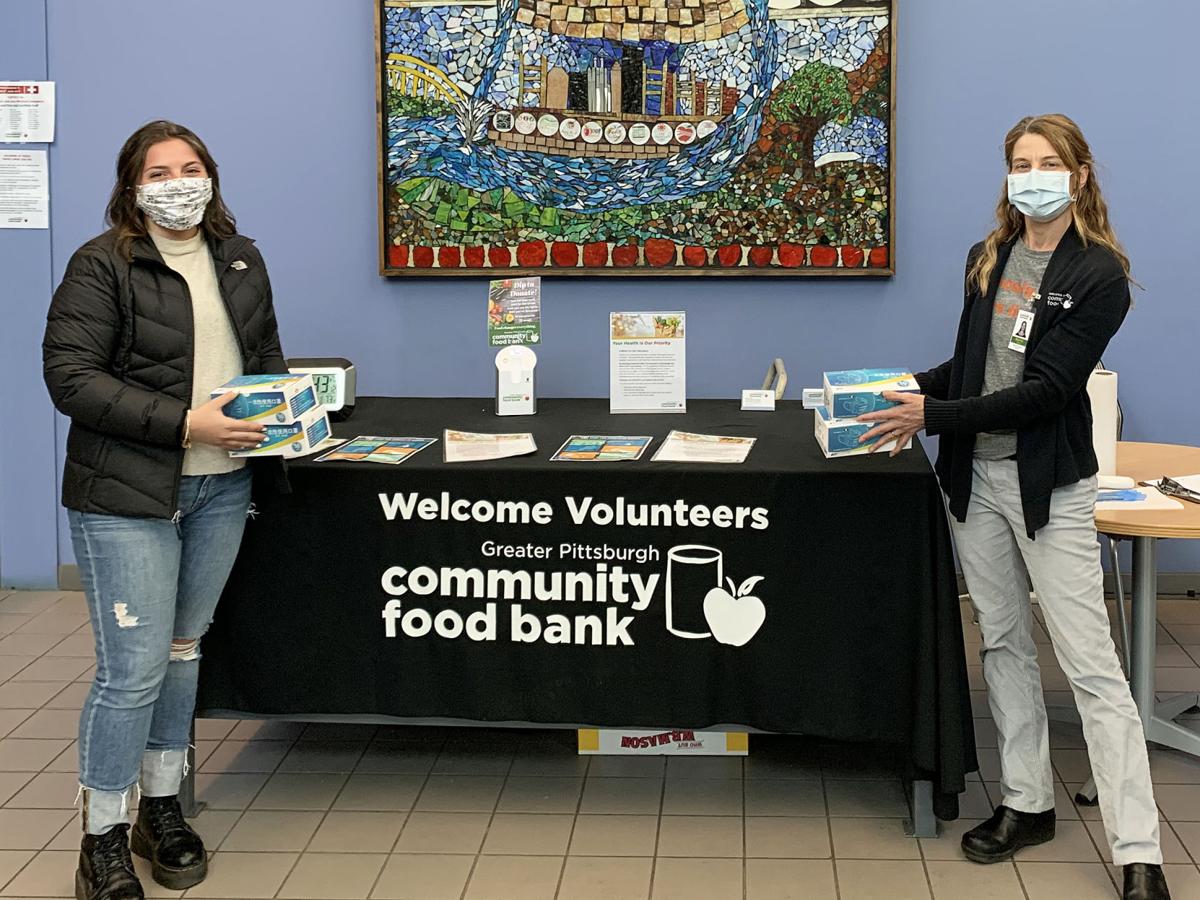 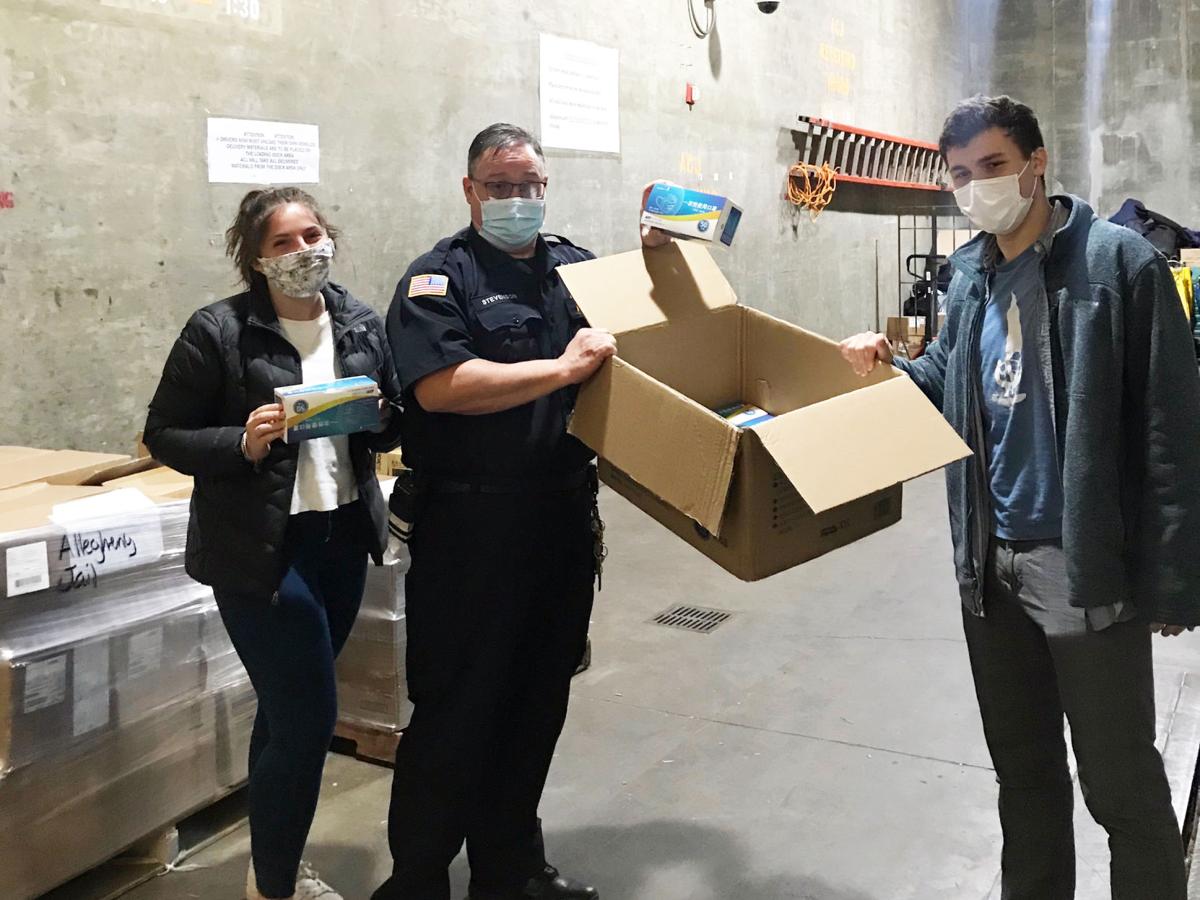 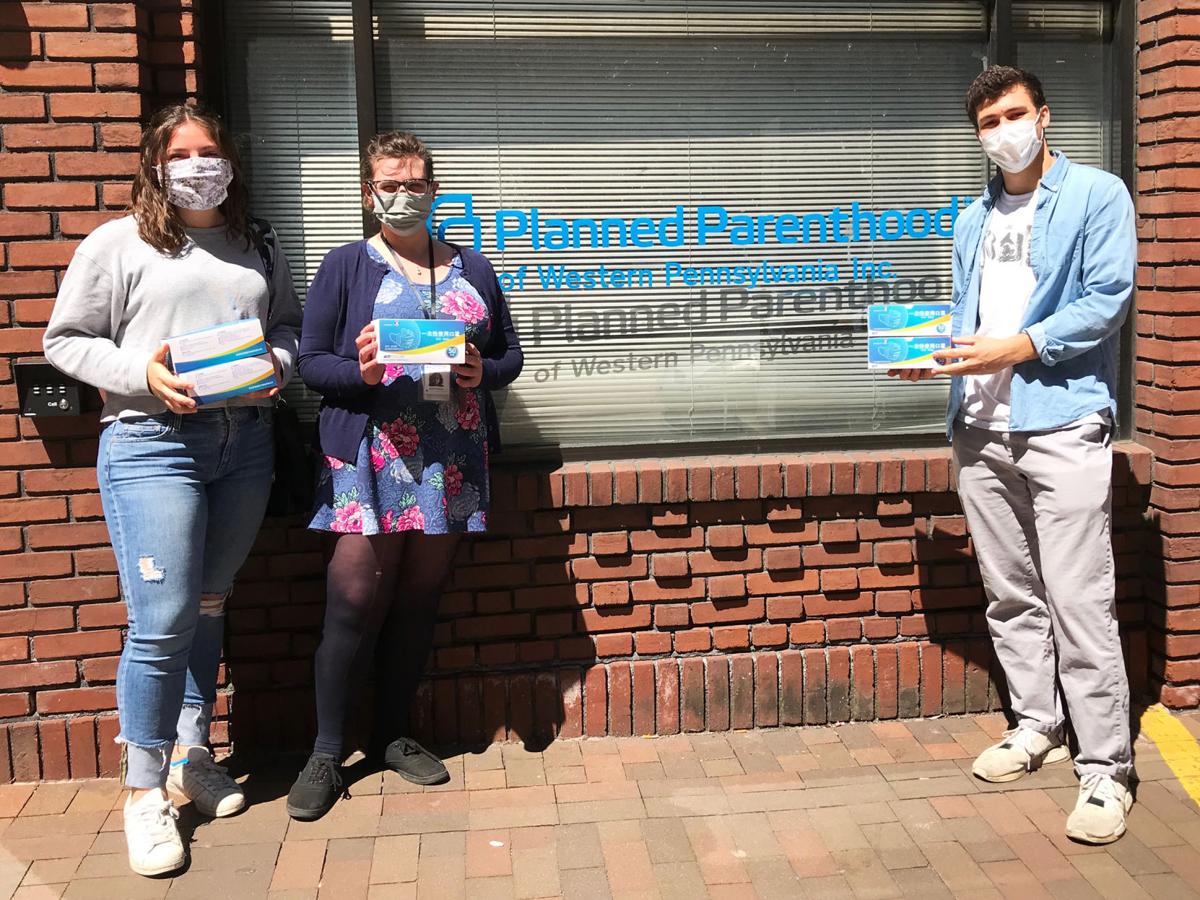 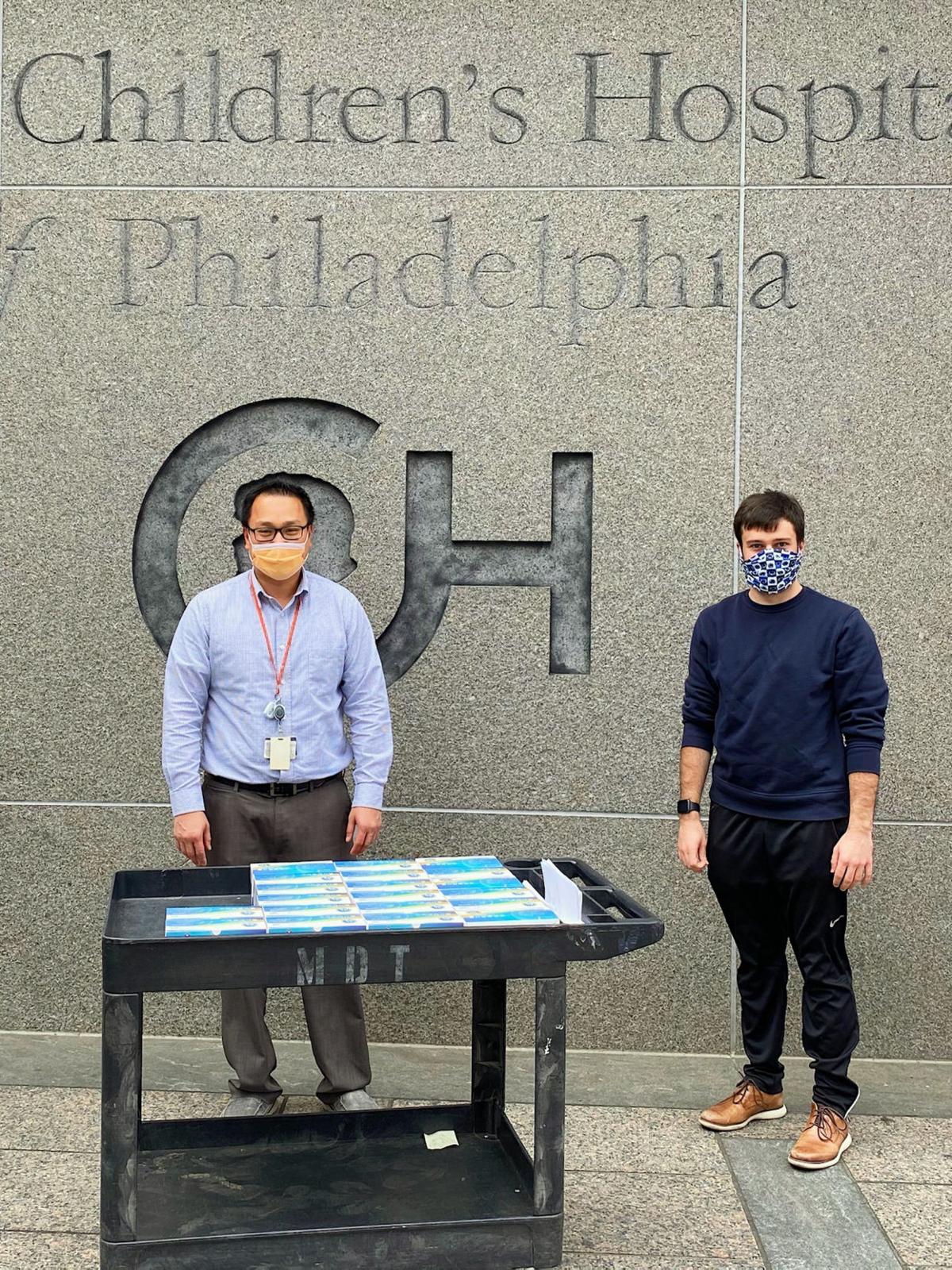 Brendan Bernicker delivers masks to the Children's Hospital of Philadelphia.

Ezra Gershanok delivers masks to the Birmingham Free Clinic in Pittsburgh’s South Side.

Brendan Bernicker delivers masks to the Children's Hospital of Philadelphia.

One of the keys to a successful product is coming up with a catchy name for it.

So when Mt. Lebanon resident Ezra Gershanok and his friend Jacob Halbert had the idea for marketing a cellphone holder that also serves as a handy spot for an ID card and the small metal device for accessing a dorm room, they came up with an idea.

Yes, both are college students, juniors at competing Big Ten universities: Gershanok at Penn State and Halbert, Michigan. Under normal circumstances, their experiences with the Keyper would make for a good story in and of itself.

But the product has opened, if you will, an opportunity for them to combine efforts with a couple of other collegians in an altruistic project for the benefit of tens of thousands of people.

Together with Upper St. Clair resident Rayna Recht, a sophomore at Tulane University, and Brendan Bernicker, a Penn State graduate who is studying law at Yale, Gershanok and Halbert have formed the COVID Response Network, with the motto “Every Hero Needs a Mask.”

Their goal is to deliver 100,000 face masks to organizations in need by June 1, and their ability to provide the personal protective equipment stems from the relationship the Keyper entrepreneurs developed with a producer in China, a man named Marion. In March, they were on a video call with him.

“We were talking about Keyper, and we saw next to him, he had these masks,” Gershanok recalled. “He offered to send them to us, and at first, we thought, OK, maybe there will be essential businesses that need to buy masks. So we were looking into selling them.”

They quickly changed their approach.

“The more we thought about it, we realized that this could be a huge opportunity to possibly help people,” Halbert said.

They posted information about the masks on social media, and the first responses they received were from representatives of hospitals.

“They were independent hospitals that were affiliated with UPMC, but not necessarily connected to the same supply chain,” Gershanok said. “We could get masks in bulk to people who are disconnected from the supply chain.”

To start, they set up a fundraiser that generated $1,500 for the Children’s Home of Pittsburgh and Lemieux Family Center to purchase masks, for which a $1 donation buys two. The effort drew the attention of former Penn State classmate Bernicker, who was seeking a way to provide more organizations with protective wear, and he contacted Gershanok and Halbert.

“We had a conversation at 5 o’clock on a Sunday evening, and we were officially a corporation at 11:30,” Bernicker said. “And we were fundraising starting that next day.”

Recht came aboard shortly after. She has been friends with Gershanok and Halbert since they attended camp together in West Virginia, and she has been using her social media skills to help market the Keyper.

“She has, without question, multiplied the effect that we’ve been able to have several-fold,” Halbert said. “So we’re really lucky that she’s also part of our team.”

Since then, the members of the COVID Response Network have been working toward their ultimate goal, delivering masks to nearly 30 organizations in Pittsburgh, Harrisburg, Philadelphia, New York City, Atlanta and the Tampa-Sarasota area in Florida, where Halbert lives.

Nonprofits in New Haven, Conn., the home of Yale University, also have benefited.

“Once the COVID reached the U.S. and it became apparent that I wasn’t going to be going to class in person anymore,” Bernicker said about the university’s physical closure, “I started working at a soup kitchen in New Haven and helping people apply for unemployment and various things like that. I realized pretty early on that people who were working at soup kitchens and homeless shelters and places I was going didn’t have the equipment that they needed.”

As a senior, she led the school’s annual Mini-THON to raise money for Four Diamonds, an organization that assists children who are battling cancer and their families at Penn State Health Children’s Hospital in Hershey. The event generated more than $40,000, far exceeding the $30,000 goal.

“That was actually one big reason why I chose to go to Tulane,” she said, citing the New Orleans university’s strong service component. “When this hit and we were all sent home, it was really a strange position to be in, especially being at the age that’s at the least risk, and not knowing how to make a difference and how to help.”

And so she was more than enthusiastic about joining the COVID Response Network team.

“I wanted to not only make a difference, myself,” she said, “but to show other people my age that it doesn’t take much to make even a small impact on your community.”

Making an impact on the network’s efforts are various logistical considerations that are subject to frequent change. At one point, the Chinese government modified requirements for labeling on packages containing masks, Halbert said.

“So our producer had to switch out the boxes for 48,000 masks,” he reported. “Of course, that delays everything. And now that it’s delayed, the shipping price has gone up.”

Problems can occur in the United States, too, as he illustrated with the example of one shipment.

“It was in Pennsylvania, maybe an hour outside of Pittsburgh, and then they shipped it all the way back to China,” he said. “And then it had to come all the way back from China to the U.S. again.”

Once the masks do make their way to Recht, Bernicker, Gershanok and Halbert, they deliver them personally to the organizations.

“It’s been great to be able to go to soup kitchens, homeless shelters, the jails and different places where there’s a ton of need, and bring them the stuff that they need to be safe,” Bernicker said.

“There are a lot of people who are standing out on the front lines, taking care of the people in our community who really need it right now, and we’re really proud to be able to support them and all the amazing work that they’re doing.”