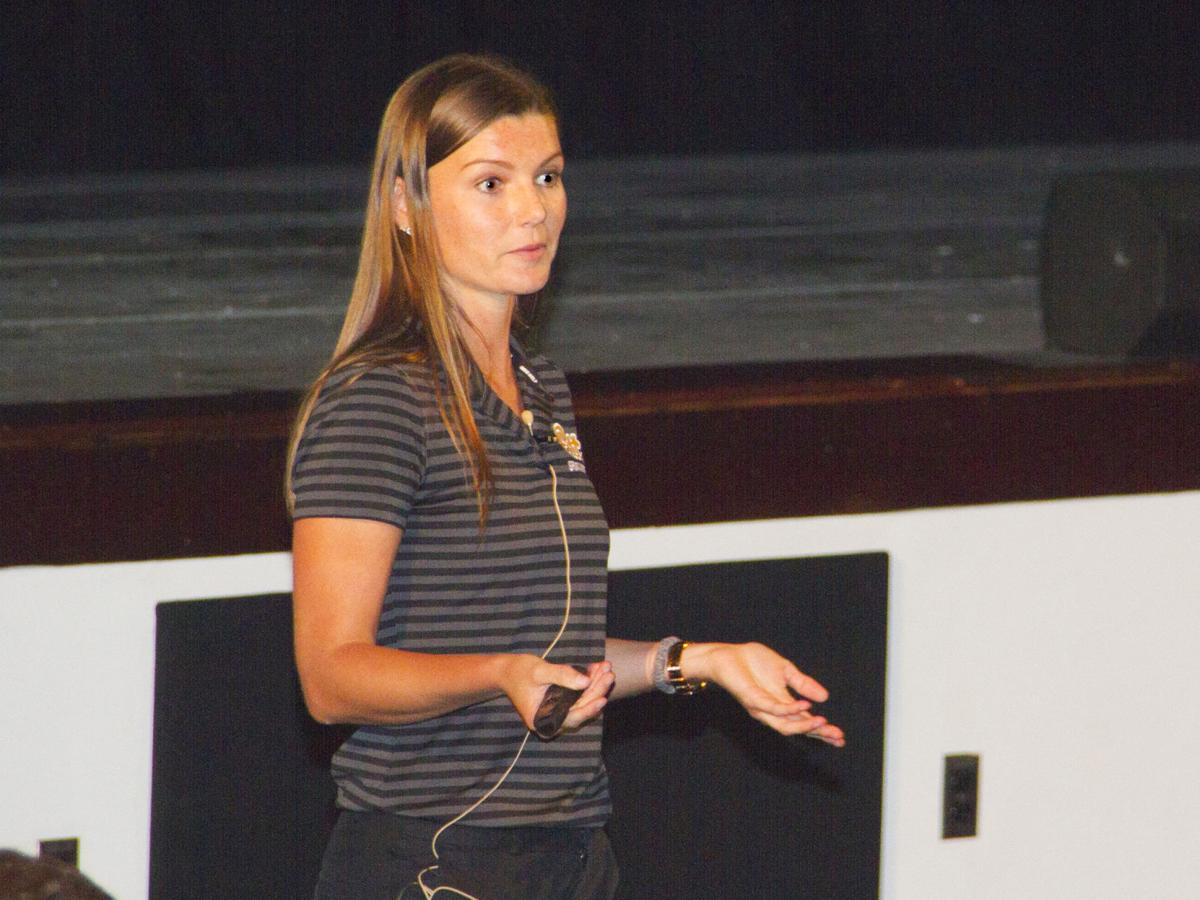 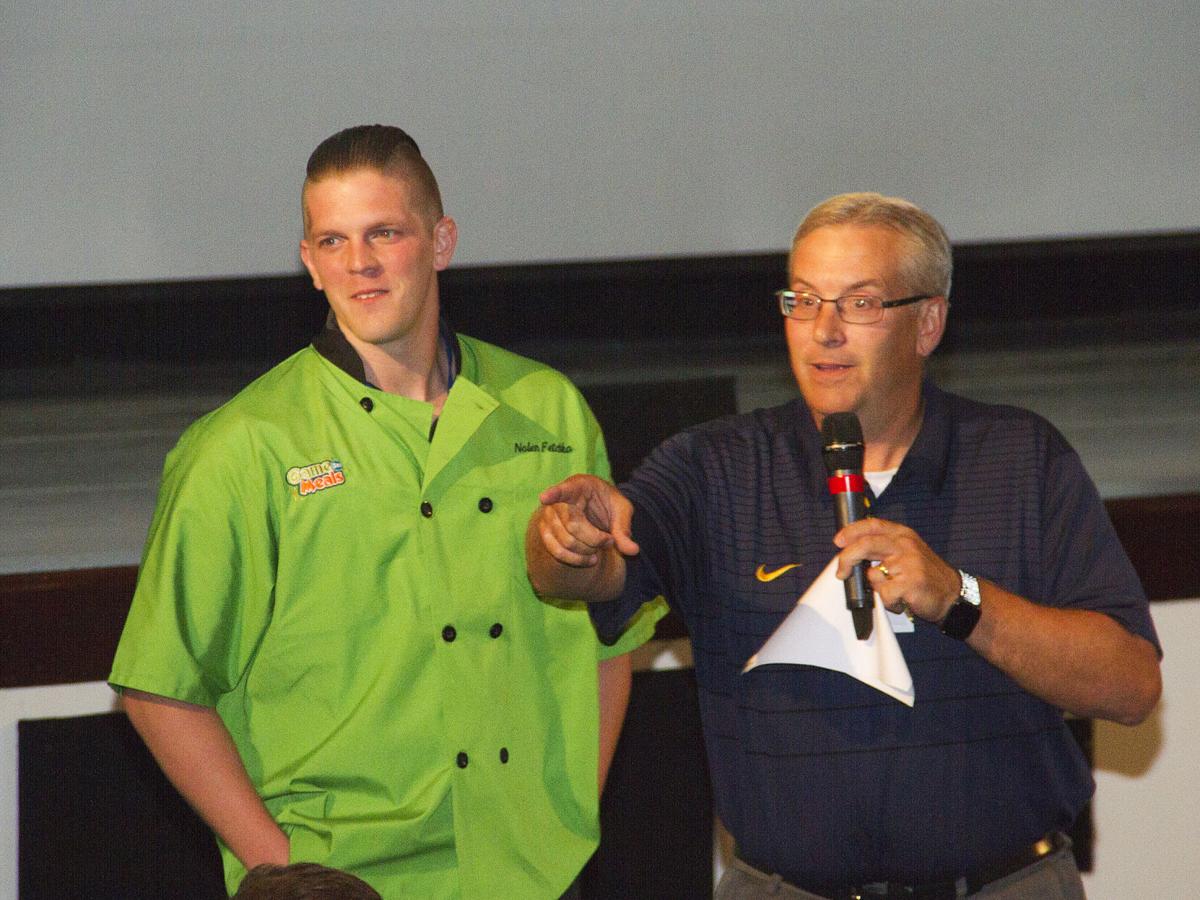 The legendary hot dog consumption by Babe Ruth notwithstanding, athletes traditionally have had a fairly good idea of what they should and shouldn’t eat.

As the world of sports has grown in popularity, so have efforts to pinpoint the best dietary habits. And Mt. Lebanon High School athletic director John Grogan is bringing that type of information to his students.

“One of the things that we’re looking for in our athletic program is that we want to find different ways to help you understand better about sports nutrition,” he told fall athletes during Wednesday’s preseason gathering in the school auditorium. “This is another avenue that could give us an advantage on game days, not to mention the ability to develop good habits that you can take with you going forward.”

And so any adults who may have been in the audience also could benefit from the expertise provided by the evening’s guest speaker: Auburn Weisensale, director of nutrition for the University of Pittsburgh athletic department.

Her visit was arranged through a collaborative effort of Joe Beaman, the university’s director of dining services, and his counterpart at Mt. Lebanon, Nolen Fetchko, to let high school students in on what the college athletes are learning.

While Weisensale’s discussion of diet and hydration was aimed at young people who train and compete on a regular basis, much of the information she presented could apply to people of all ages who follow their doctors’ orders and exercise regularly.

Carbohydrates, for example, often are perceived as something to be avoided because of their propensity to help cause weight gain. But Weisensale spoke about their benefits, including the effects of eating foods that contain simple carbohydrates, such as white bread and white rice.

“They’re easy on your GI tract,” she said. “So if you’re someone who maybe gets an upset stomach before performing or training, your simple carbohydrates are the best source of energy because they digest within 15 to 30 minutes. They can get into your bloodstream and give you energy.”

“It digests a little bit slower, so it will give you sustained fuel over a longer period of time,” Weisensale said. “So throughout the day, we recommend that you eat whole grains. You eat your complex carbohydrates. And then right before training or during training is when you’d have those simple carbs.”

For athletes, consuming protein always has been a prime consideration. Some misunderstand the reasons.

Many snacks, of course, contain high levels of fat. But as is the case with carbs, certain types of fats can be beneficial.

“As an athlete, you want to focus on unsaturated fat,” Weisensale told the students, recommending such food choices as avocado, walnuts, salmon and peanut butter. “This type of fat actually helps reduce inflammation and it aids in recovery. The more you exercise, the more inflamed your muscles get. We want to reduce that as much as possible, to help reduce soreness and get you guys back to feeling refreshed sooner.

“Your saturated fats, on the other hand, actually slow down the blood flow,” she added. “So the nutrients can’t get out to your muscles as efficiently. That actually makes you feel more sore and impairs your recovery.”

She also talked about a “post-workout window” with regard to nutrition.

“You have about 30 minutes after a training session or after a competition to really refuel your body in its optimal state,” she said. “Your heart is pumping fast. Your blood is pumping through your body. And when you eat food, it’s going to digest pretty quickly, and it’s going to get those nutrients out to your muscles to help repair them more efficiently than if you finish practice and then didn’t eat anything until two hours later.”

For student athletes who travel to compete, a postgame meal may be a long time coming. So Weisensale suggested they carry along snacks that contain carbohydrates and protein, such as chocolate milk, a peanut butter and jelly sandwich or apple with peanut butter.

She also discussed nutritional supplements and how taking them can lead to problems.

“A lot of athletes are failing drug tests, and most of the time they’re failing it because they didn’t know a banned ingredient was in there,” she said.

Supplements labeled “NSF” have been tested by a third party, and according to Weisensale, “You’re about 99% safe from failing a drug test.”

But in other cases, buyer beware, such as the story she told about a young man whose father gave him a supplement to enhance his performance playing basketball.

“The kid got really dizzy after taking it and had to sit down. He wasn’t able to play in those summer league games,” she said. “They actually investigated the supplement and did some tests on it, and they found that there was meth in it.”

Those kinds of examples is why Weisensale and her colleagues espouse eating properly as the path to performance enhancement.

“Food first is kind of what we preach,” she said.