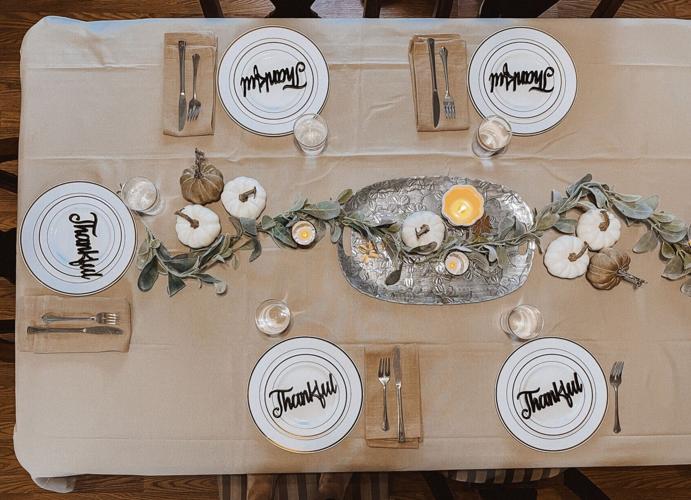 Friendsgiving is a modern take on the traditional Thanksgiving holiday, celebrated with a small (or large!) group of friends. The holiday is tailored to each group of friends; some folks celebrate upscale vegan Friendsgivings, while others dress down and dine on take-out. 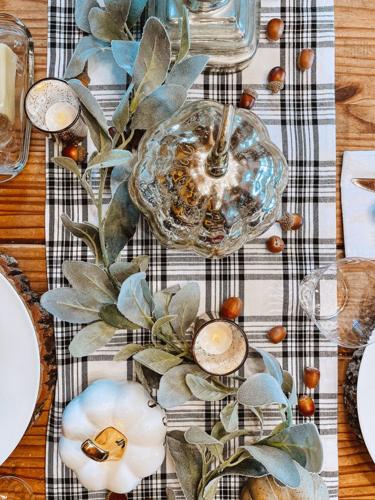 Friendsgiving is what you make it. Some opt for a formal dinner party, complete with hors d’oeuvres, while other groups of friends-turned-family dress casually and compete at board games over homemade desserts and favorite wines all evening long. 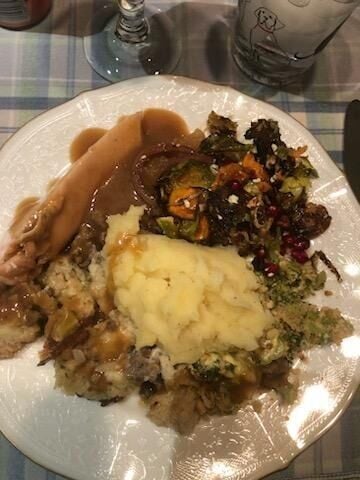 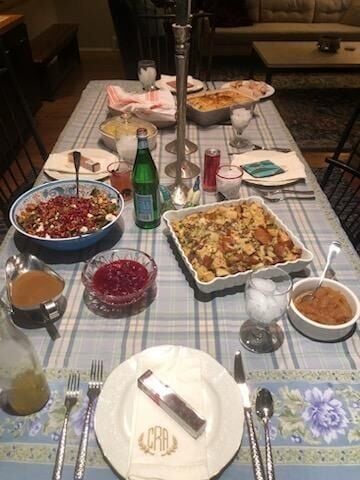 “Any time you gather, be it friends or family, around the table, and you’re in a position to have a great meal in a warm, safe place with people that you truly care about and who truly care about you – now, more than ever, I’m profoundly grateful for those opportunities,” said Christy Bean Rowing, who set the Friendsgiving table for her guests Buffy Hasco, Katie Jones Goldman and Eileen O’Hara last Thursday.

Friendsgiving is a modern take on the traditional Thanksgiving holiday, celebrated with a small (or large!) group of friends. The holiday is tailored to each group of friends; some folks celebrate upscale vegan Friendsgivings, while others dress down and dine on take-out.

Friendsgiving is what you make it. Some opt for a formal dinner party, complete with hors d’oeuvres, while other groups of friends-turned-family dress casually and compete at board games over homemade desserts and favorite wines all evening long.

“Any time you gather, be it friends or family, around the table, and you’re in a position to have a great meal in a warm, safe place with people that you truly care about and who truly care about you – now, more than ever, I’m profoundly grateful for those opportunities,” said Christy Bean Rowing, who set the Friendsgiving table for her guests Buffy Hasco, Katie Jones Goldman and Eileen O’Hara last Thursday.

But increasingly people are carving out time during this busy season to gather with pals for wining, dining and board gaming at annual Friendsgiving get-togethers.

“What was so wonderful about hosting a Friendsgiving is everything was done without a sense of obligation, which was very, you know, relaxing,” said Christy Bean Rowing, executive director of Washington Citywide Development Corp., who hosted her first Friendsgiving last Thursday. “We weren’t inviting people because we had to. We weren’t making a certain dish because we had to. It was just what we wanted to do.”

The idea to celebrate Turkey Day with friends-turned-family can be dated to a 1994 episode of the hit TV series “Friends,” but the term “Friendsgiving” didn’t enter the lexicon until 2007, when it made the rounds on an early internet forum called Usenet, according to Merriam-Webster dictionary.

Friendsgiving earned the spotlight in a 2011 Bailey’s Irish Cream ad, which debuted the term to primetime audiences. Shortly after, an episode of “The Real Housewives of New Jersey” – aptly titled “Gobblefellas” – centered around a Friendsgiving event aired, and the holiday has trended upward ever since, with 40% of Millennials reporting they planned to celebrate this year, according to YPulse, a subscription-based syndicate research organization that focuses on Millennial and Gen Z trends.

Gen Z, too, is all about Friendsgiving. YPulse reported that 36% of Gen Z’ers were hosting or attending a Friendsgiving gathering, typically celebrated the week before Thanksgiving, though some friends gather the week after and still others carry the turkey fun into early December.

The beauty of Friendsgiving, Rowing found, is in its malleability.

“We weren’t sort of chasing the newest recipe. We did a throwback to the dishes that we all grew up with. We did the old-school Betty Crocker broccoli casserole; I made applesauce – something that my great-grandmother used to make every year. It wasn’t fancy,” Bean Rowing, of Mt. Lebanon, said. “We weren’t worried about a football game or something like that. There was no rush. We all just sat, relaxed and talked, and just felt very grateful for being in one another’s company.”

If Friendsgiving can be anything – a formal sit-down dinner, a vegan potluck, a competitive game night complete with wine and dessert – do social rules apply? How does one go about hosting or attending a Friendsgiving gathering?

It all begins with the invitation, said Daniel Post Senning, co-president of the Emily Post Institute, a fifth-generation family business that literally wrote the book on etiquette.

“The invitation is so important. It’s key. It’s where you define your role as host and guest, as far as the etiquette,” said Post Senning. “If you’re the one hosting, you want to think about giving those cues. The way that you issue an invitation will also start to set a tone for the event. The medium is part of the message. If you send someone an invitation, you’re more likely to get a reply. For some people, text is going to work really well. You can also do it via phone call, email.”

The Mt. Lebanon ladies planned a casual Friendsgiving affair via text, Bean Rowing said, which worked wonderfully. Post Senning said it doesn’t matter if the occasion is formal, with artful postal invitations, or low-key, with a quick phone invite: all offers to attend Friendsgiving should include lots of details, including start and, where appropriate, end time, and expectations for guest contributions.

The invitation also cues guests into whether the gathering is adult-only or kid-friendly. Hosts, craft that part of the invite with care.

“This is the host-guest dance,” Post Senning said. “You want your invitation to be welcoming. My general guideline is to keep the invitation itself framed as positively as possible. I might think about the language, like, ‘Looking to keep this an adult affair’ as opposed to ‘No kids, please,’” he said, noting that parents should understand their children’s comfort – and attention-levels – and plan accordingly.

Fur babies are a separate but, for many, equal issue, and Post Senning recommends hosts speak specifically to guests traveling with dogs or cats to let those Friendsgiving invitees know if the event is pet-free.

Guest etiquette includes taking a host’s lead, but invitees are welcome to ask clarifying questions, Post Senning said. (Guests bringing a dish may ask if the host needs a vegetarian side; those between two outfits might ask which is more suited to the occasion.)

Preparing for the gathering is one thing, but arriving is another – guests, arrive on time, and hosts, greet every guest warmly, perhaps with a drink in hand and always with a welcoming smiling and enthusiastic hello.

“I would say all the rules that guide good conversation still apply. Just because it’s not your mother doesn’t mean it’s OK to ruin dinner with a heated argument,” he said. “If I’m going to go in one of those riskier directions, I’m going to hold myself accountable.”

Hosts and guests often focus on the lead-up to an event and the gathering itself, and transitions, Post Senning said, are an oft-overlooked but important moment of Friendsgivings. When the table is cleared, and the lights dimmed or the music softened, that’s a sign the evening is coming to a close.

“It’s not up to a guest to say goodbye to every single person,” he said, but, “Say goodbye to the host. Thank them on the way out the door.”

And hosts, “thank guests for attending and for any contributions they made to the party, whether that was telling a really funny joke or for a really yummy cauliflower dish.”

Bean Rowing said she and her first-ever Friendsgiving guests had so much fun, they already have plans to celebrate the modern holiday again next year.

“There was no stress. We were all just so happy to be there that it didn’t even cross our minds to take a selfie,” Bean Rowing laughed. “I felt sheer appreciation for quiet time with friends, to catch up. It was great.”

Appreciation is one piece of Friendsgiving etiquette guests and hosts will want to heed. First-time guests should follow up with a handwritten thank you within a week of the event, Post Senning said, while regular Friendsgiving attendees should reach out to their generous host or hostess with a text or phone call (although handwritten thanks are always appreciated).

And while propriety guides an occasion, Post Senning said that, ultimately, there are no hard-fast etiquette rules for a fantastic Friendsgiving.

“People are redefining communities and traditions all the time. Ultimately, it’s about the spirit that you bring to the event. The warmth of your welcome, the graciousness you show when things go wrong, the good humor you bring to situations that are a little awkward,” Post Senning said, the smile in his voice evident over the phone.

“It’s about an experience of being together, the ritual of sharing good food. Whether you celebrate around a table or around a football game or with a group of mimes from around the world, those are the details, but if you’re honoring the spirit of coming together and express and cultivate gratitude, you’re honoring the spirit of the tradition. The spirit ... is what’s going to stick with people.”