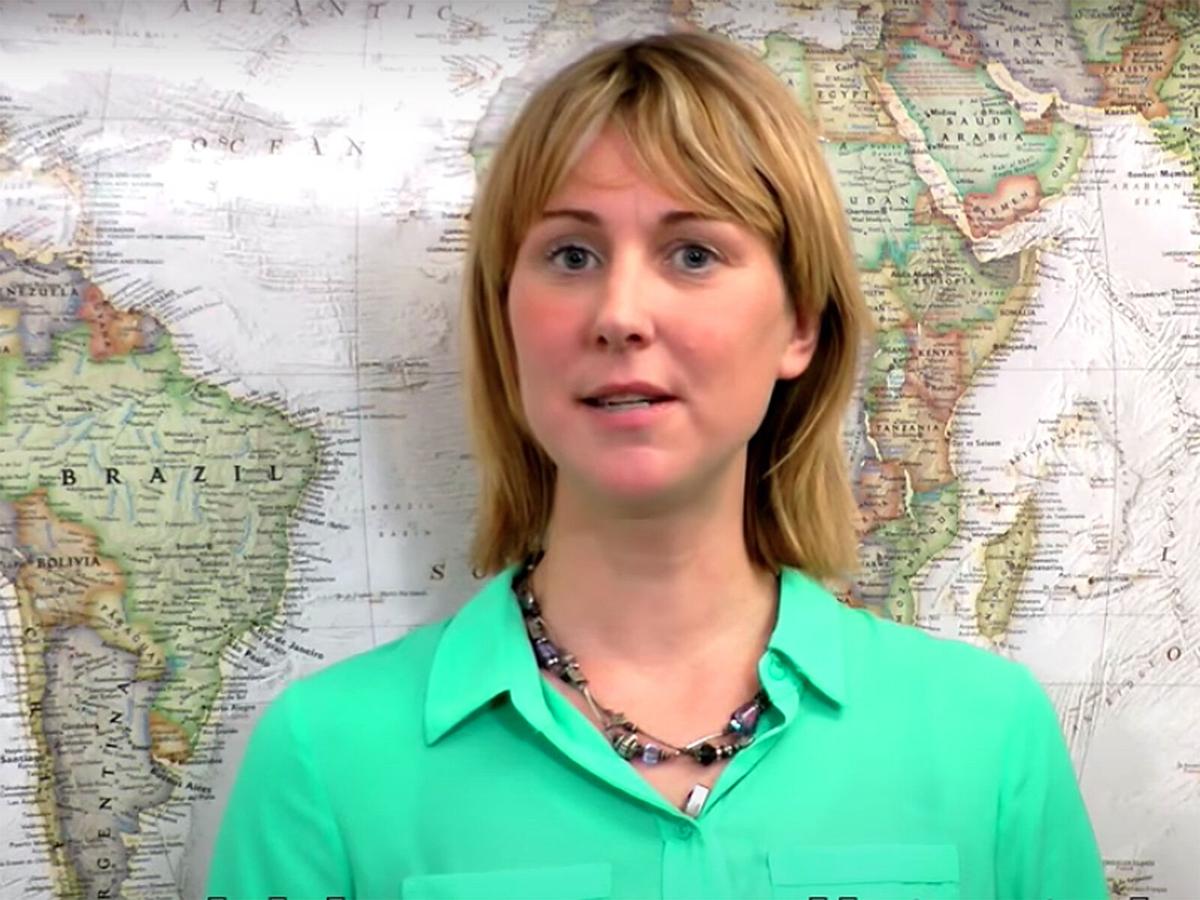 Marie Young tells prospective students about the Unviersity of Pittsburgh’s Irish program in an explanatory video. 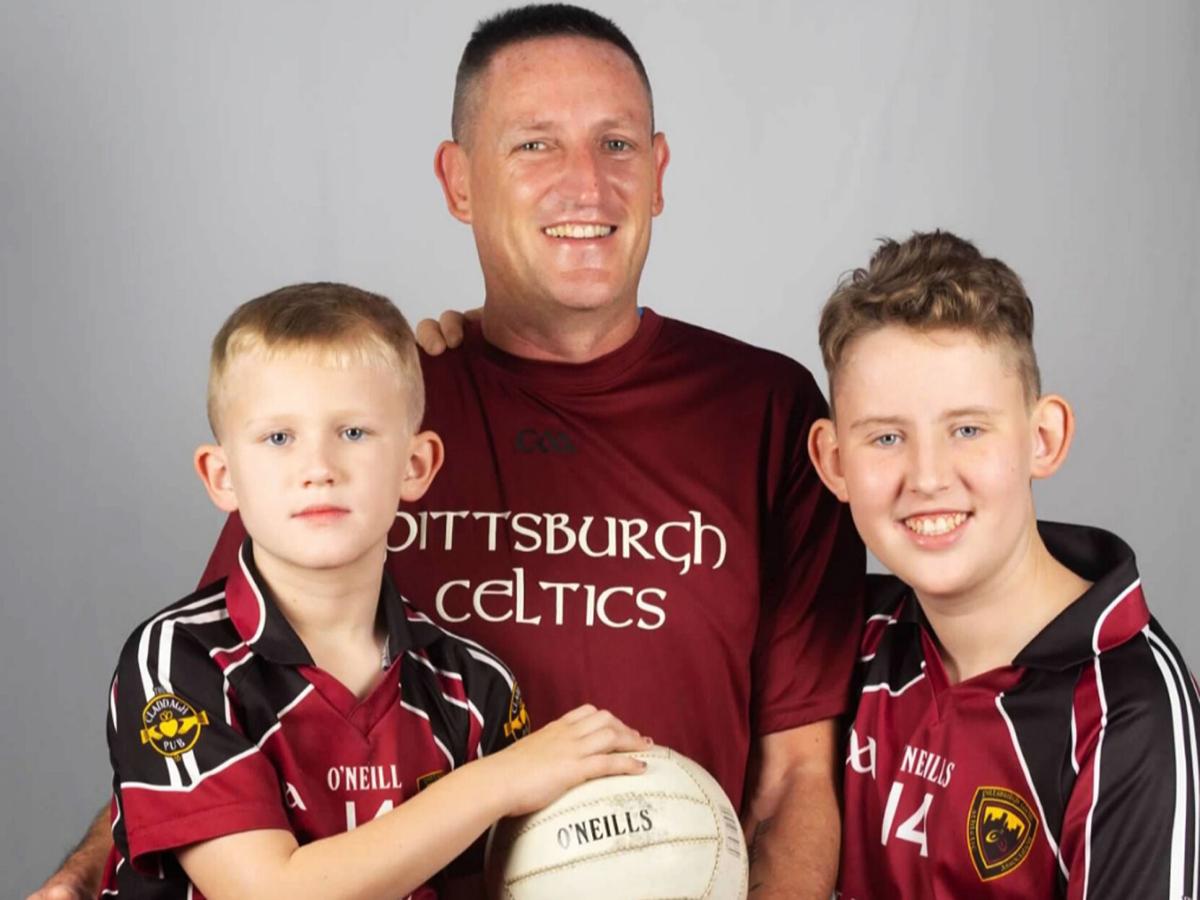 Ready for some Gaelic football are, from left, Tierney, John and Ronan Young. 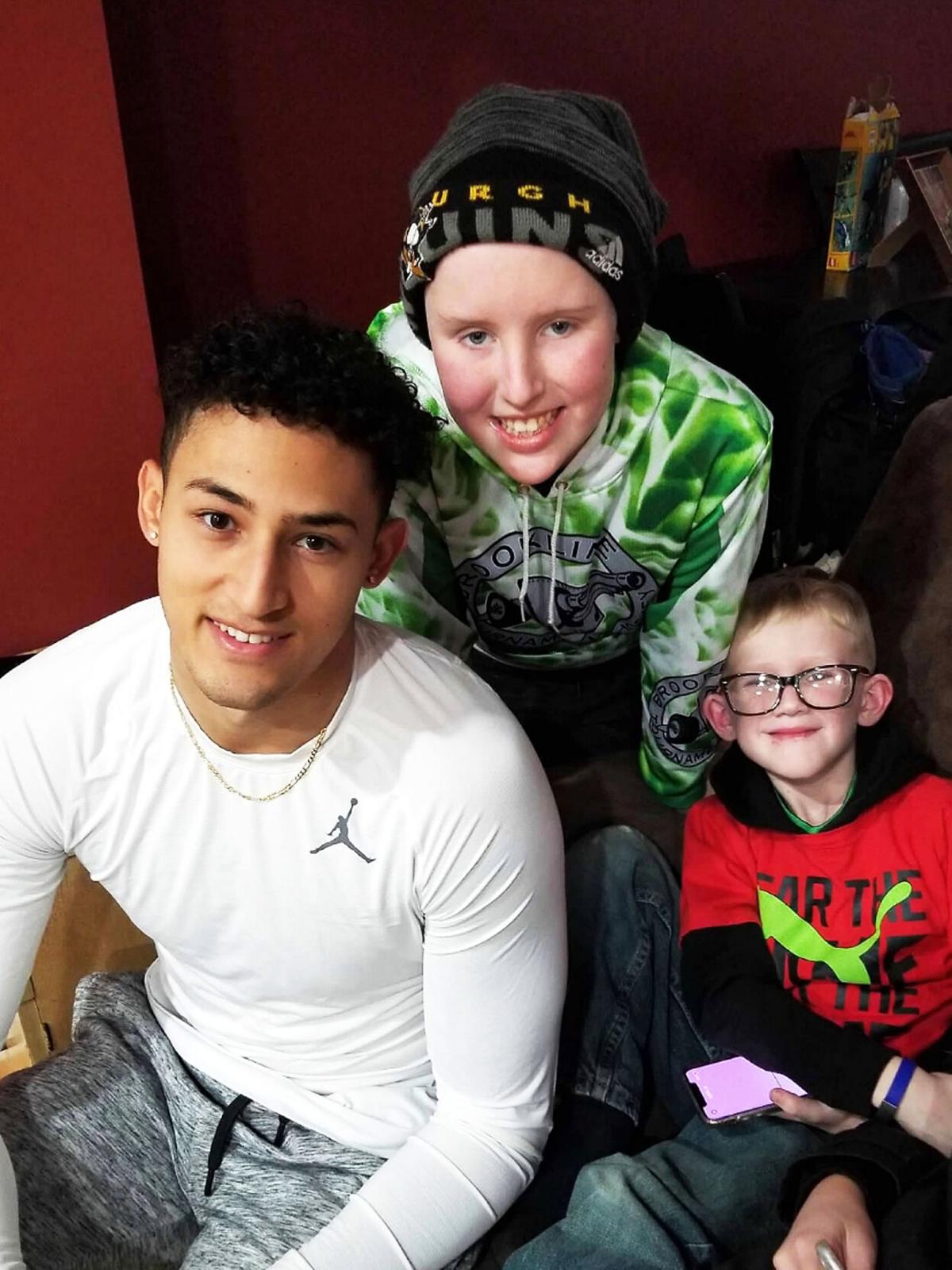 From left are Jack, Ronan and Tierney Young. 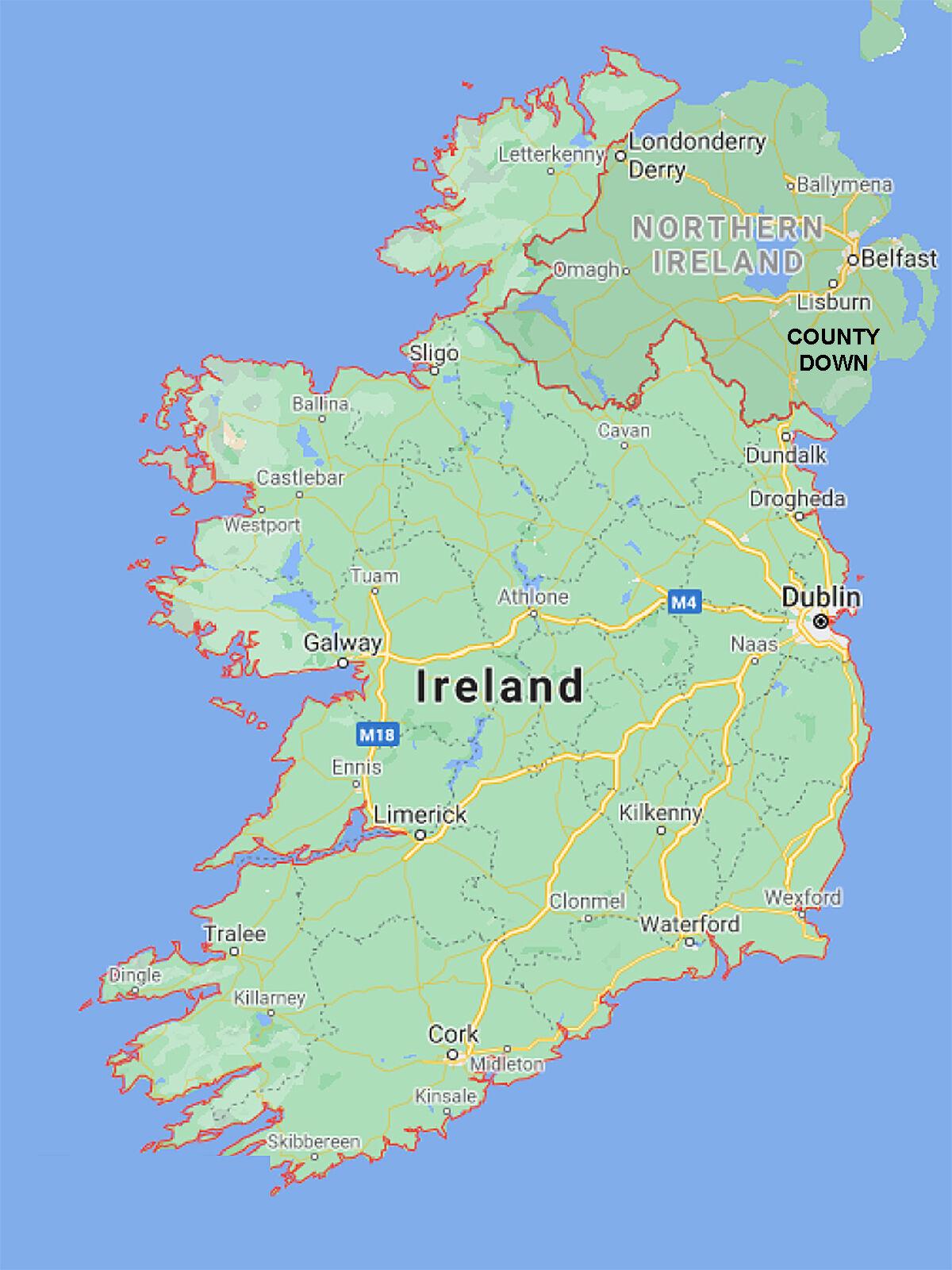 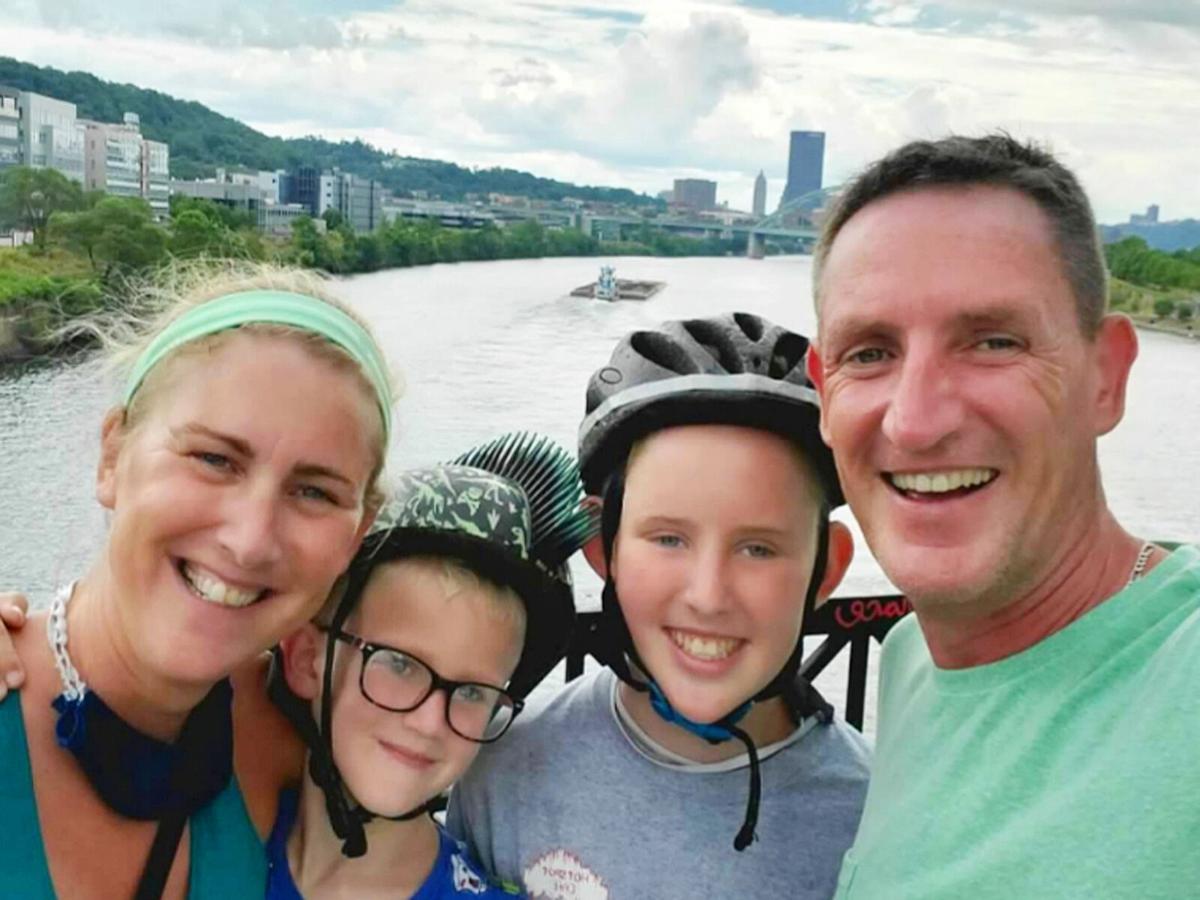 From left are Marie, Tierney, Ronan and John Young.

In Ireland, there’s no green beer.

But in Pittsburgh, there are green jerseys, as seen being worn by Penguins players on the ice in the middle of each March.

As St. Patrick’s Day approaches, John and Marie Young of Mt. Lebanon take a similar attitude to the people of their native country, where the Day of the Festival of Patrick is more of a religious and cultural celebration than its bacchanal of an American cousin.

“I tell my students, the whole time I never saw green eggs and ham at 8 o’clock in the morning in the saloon,” Marie said about growing up in Ireland. “Kegs and eggs. I mean, what is that?”

John’s job connects him directly with the Penguins’ jerseys, green and otherwise. He is director of sales and marketing for Pro Knitwear in Brookline, the supplier of uniforms to Pittsburgh’s National Hockey League franchise and other major-league sports teams.

“We’re currently working on a version that will be used on March 16,” he said, for the Penguins’ pre-St. Pat’s Day game against, appropriately for a celebration of Ireland, the Boston Bruins.

“Marie and I are so involved in the culture, the language and the sports environment, and that gives us a little creativity to put that in there, into those jersey designs,” John said. “And the Penguins are fairly flexible in regard to allowing us some leeway on those jerseys.”

If the word “Piongainí” would happen to appear on the shirts, that represents the team’s nickname in Gaeilge, the Irish language.

That’s a taste of what Marie teaches within Pitt’s Less-Commonly-Taught Languages Center.

“We typically have small classes, which suits us in a language base. And certainly right now, it’s lovely because we’re online,” she said regarding the instructional transition prompted by COVID-19. “It’s really nice to have that interaction one-on-one. It gives them time to be able to speak. It gives me time to get to know them.”

Her Irish culture class, which she teaches in English, generally has a larger size, “which again suits us, because it’s group work, finding out what it would be like if you were to travel to Ireland.”

Actually, she and some of her students usually have the opportunity to travel across the Atlantic Ocean for a study abroad program, at least during summers not marred by a pandemic. The itineraries have included visits to high-profile locations in Dublin, Ireland’s capital and Marie’s original hometown, including Oireachtas, the National Parliament, and Aras an Uachtaráin, the president’s official residence.

She said most of the students have some connection with Ireland, either through family or participating in cultural activities such as Irish dance.

“We definitely increased our numbers over the years with ancestry.com and things like that,” she said. “Our programs are getting traction in the university. We have an Irish minor now, so that has kind of put us up there with the same standard of a Spanish course or a French course, and kind of go away from that Less-Commonly-Taught Languages idea.”

In Ireland, Gaeilge is becoming a more commonly spoken language after being pretty much supplanted by English over the centuries.

“We’re moving away from that kind of ‘old woman by the fire lamenting’ to it being modern,” Marie said, referencing the language’s growing presence on social media. “TikTok even has Irish. So the young people are really trying to make a go of it, because they realize that this is their language.”

Gaeilge even is making a comeback in Northern Ireland, the six counties of the traditional province of Ulster that are under the control of the United Kingdom rather than the Republic of Ireland.

“The idea of the Irish language used to be very political,” Marie said, “kind of, if you were a Catholic you spoke Irish and if you were a Protestant, you didn’t.

“However, of late, because the political situation has kind of calmed down somewhat, people are now looking at the language and realizing, hang on. This is our heritage. This is our language, and it’s like telling somebody from France, you can’t speak French.”

John grew up in County Down, Northern Ireland, before coming to the United States in 1991. He maintains strong ties to his roots especially through his longtime involvement with the U.S. Gaelic Athletic Association, at first by playing the sport of Gaelic football.

Today, he serves as vice chairperson of the American county board, as it’s called, of the Ireland-based, globally prevalent Gaelic Athletic Association.

“It’s not just about sport,” he said. “It is about promoting our culture throughout the world, really.”

In addition to such pastimes as Gaelic football and handball, hurling, camogie and rounders, the association works toward the advancement of Irish music and dance, and, of course, Gaeilge.

Peil Ghaelach, in Gaeilge, is John’s sport, and Pittsburgh has a Gaelic football team, the Celtics, that has competed since 1975. Participation is growing on a national basis, he said.

“It’s interesting to see people who didn’t grow up with the sport take it up and become very involved in it. Our membership would be about 55% non-Irish and 45% Irish,” he reported. “The non-Irish have actually outgrown the Irish involved in the association.”

With regard to the rising popularity, John said the activity fills a void for many people locally.

“If you look at American sports, if you’re a competitive athlete, there’s not much left for you after college if you don’t make it into the pros,” he said. “So I think we fill a void for competitive American athletes.”

The Youngs’ sons – Tiernan, 7; Ronan, 13; and Jack, a University of Michigan senior – all have participated in Gaelic sports, and their parents encourage them to celebrate their Irish heritage along with American traditions and values.

That includes speaking Gaeilge, which John and Marie often use when talking about the kids, “often in negative connotation,” she said.

“They don’t know, and then they get mad,” she added. “And we’re telling them, ‘Well, listen. You should learn it, and then you’ll know exactly what we’re saying.”