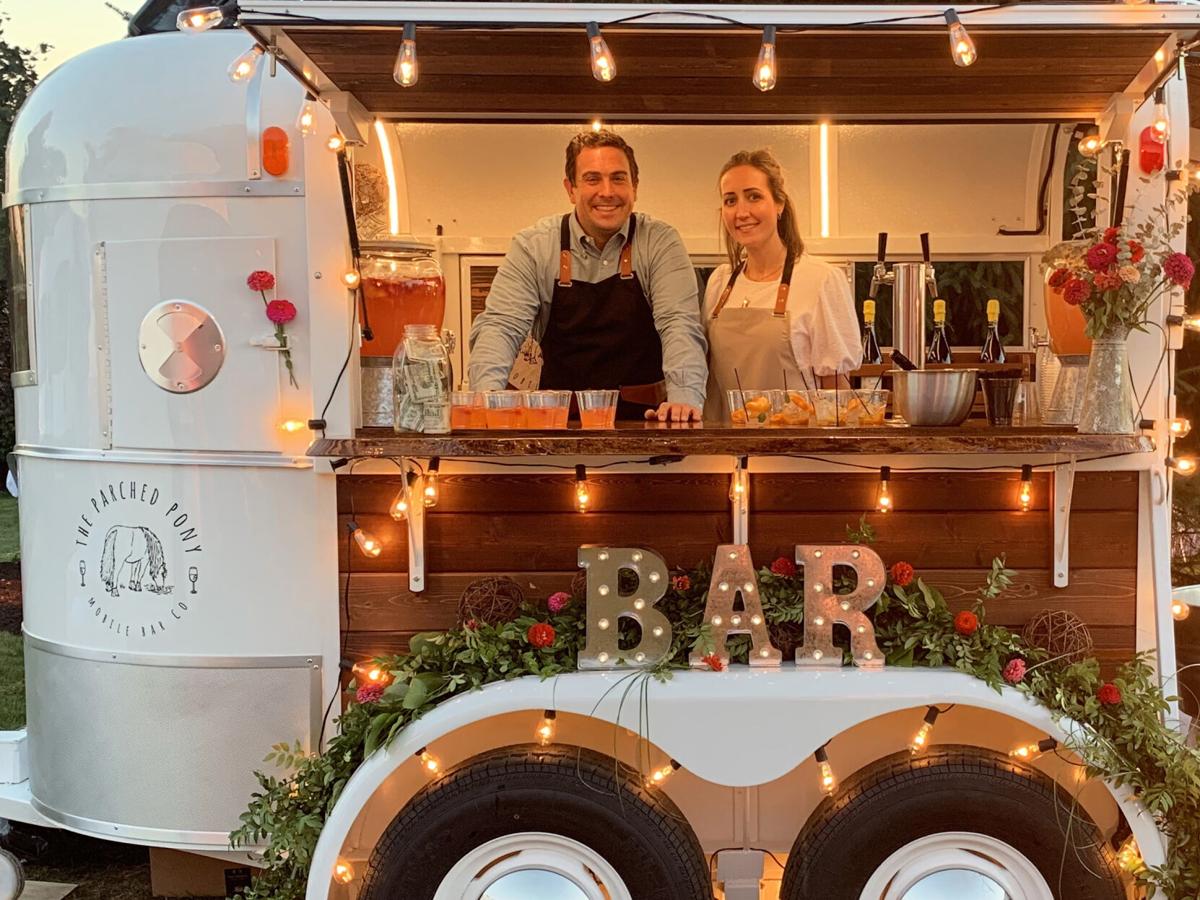 Ryan and Amy Bruckner show the fruits of their investment. 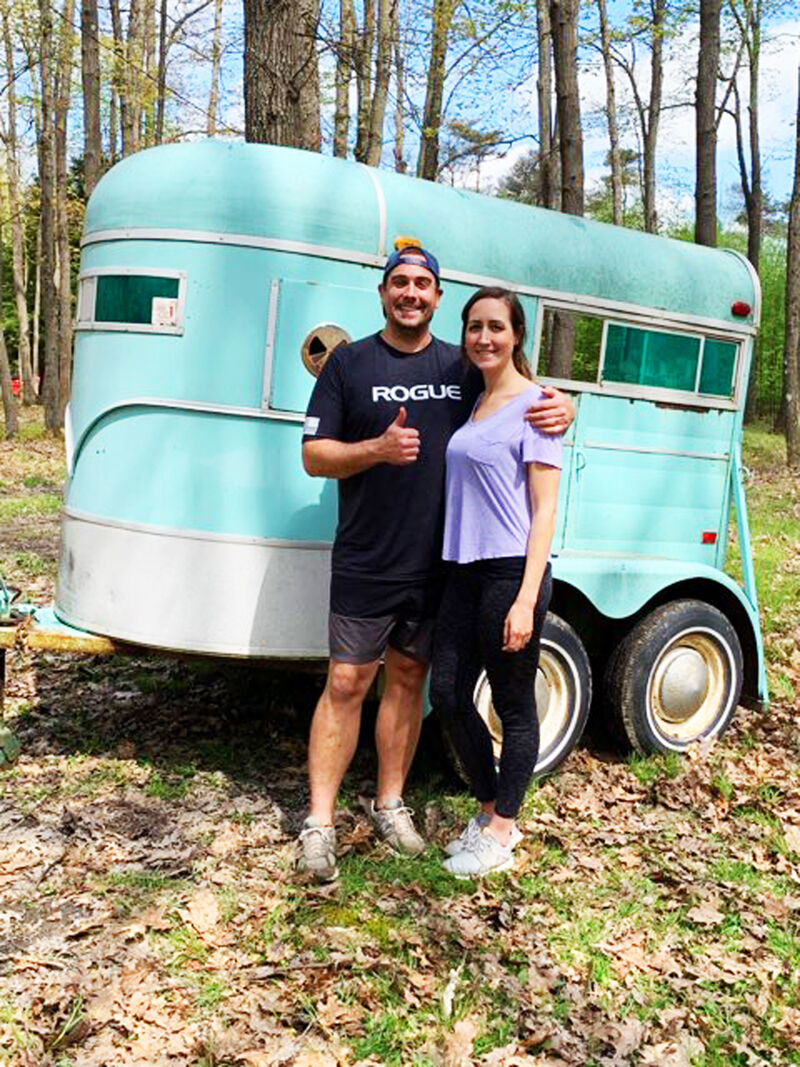 In the beginning, Ryan and Amy Bruckner bought an old pony trailer, in which pigs traveled, too. 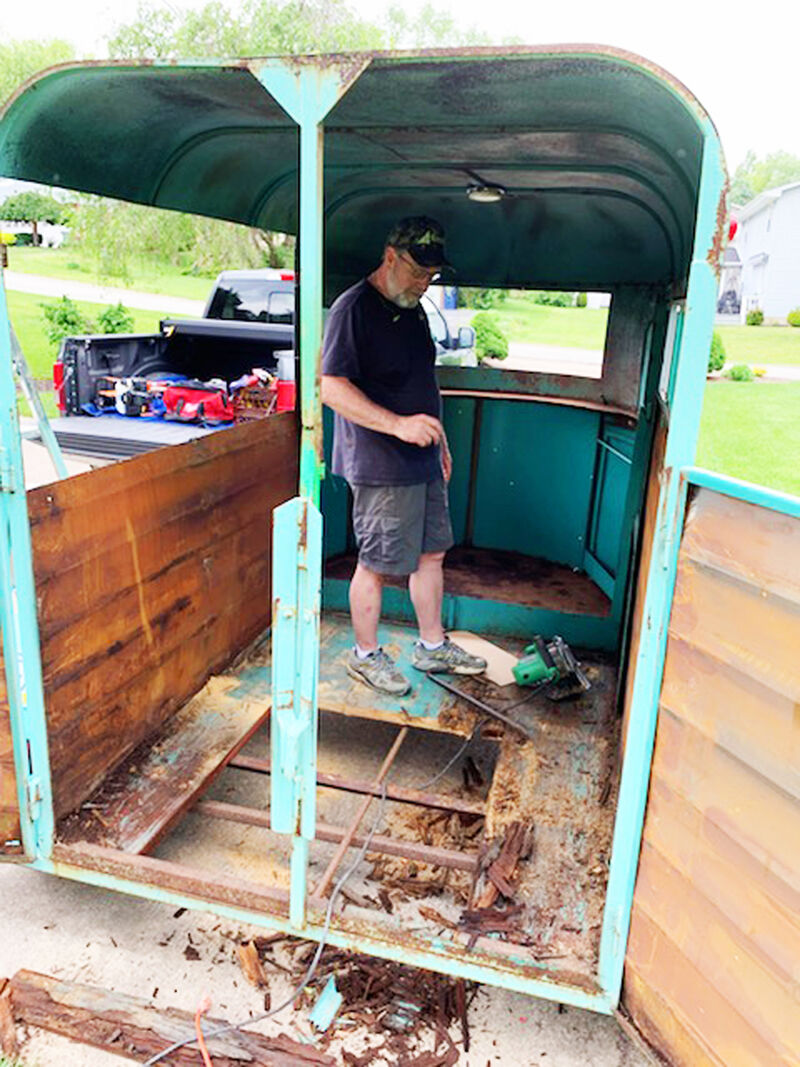 Carl Bruckner has a look at the condition of the trailer’s floor prior to its overhaul. 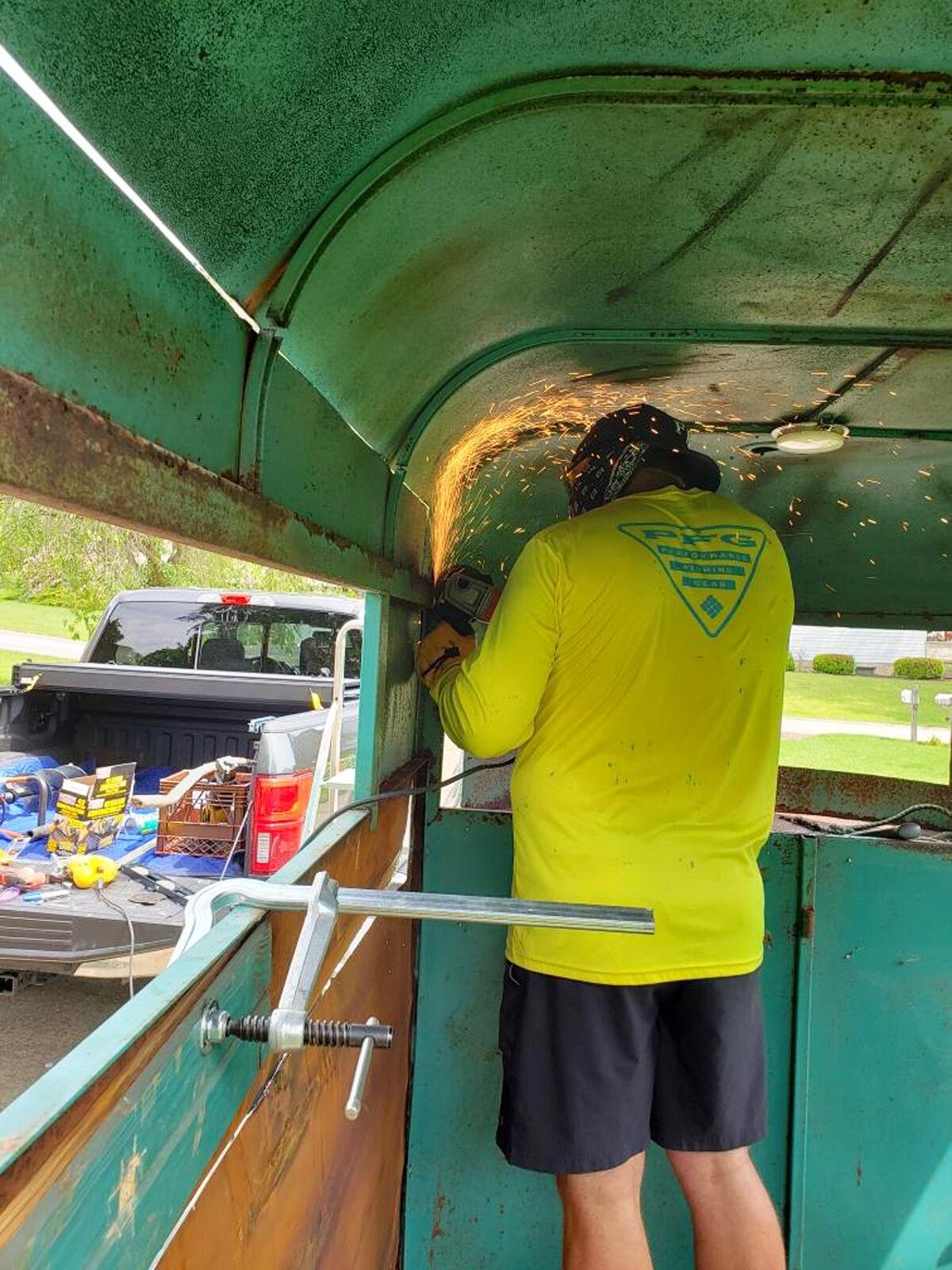 Work progresses inside the trailer. 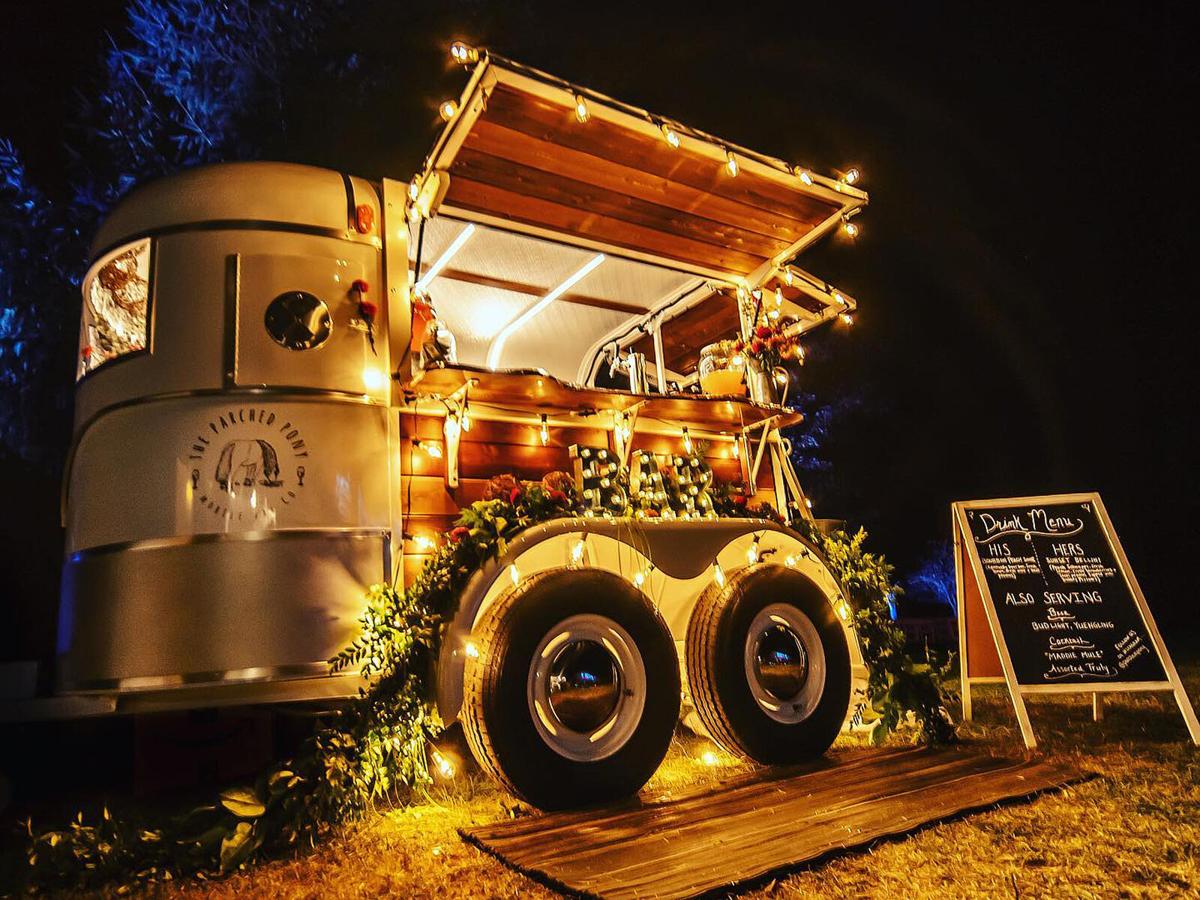 The Parched Pony Mobile Bar Co. is open for business. 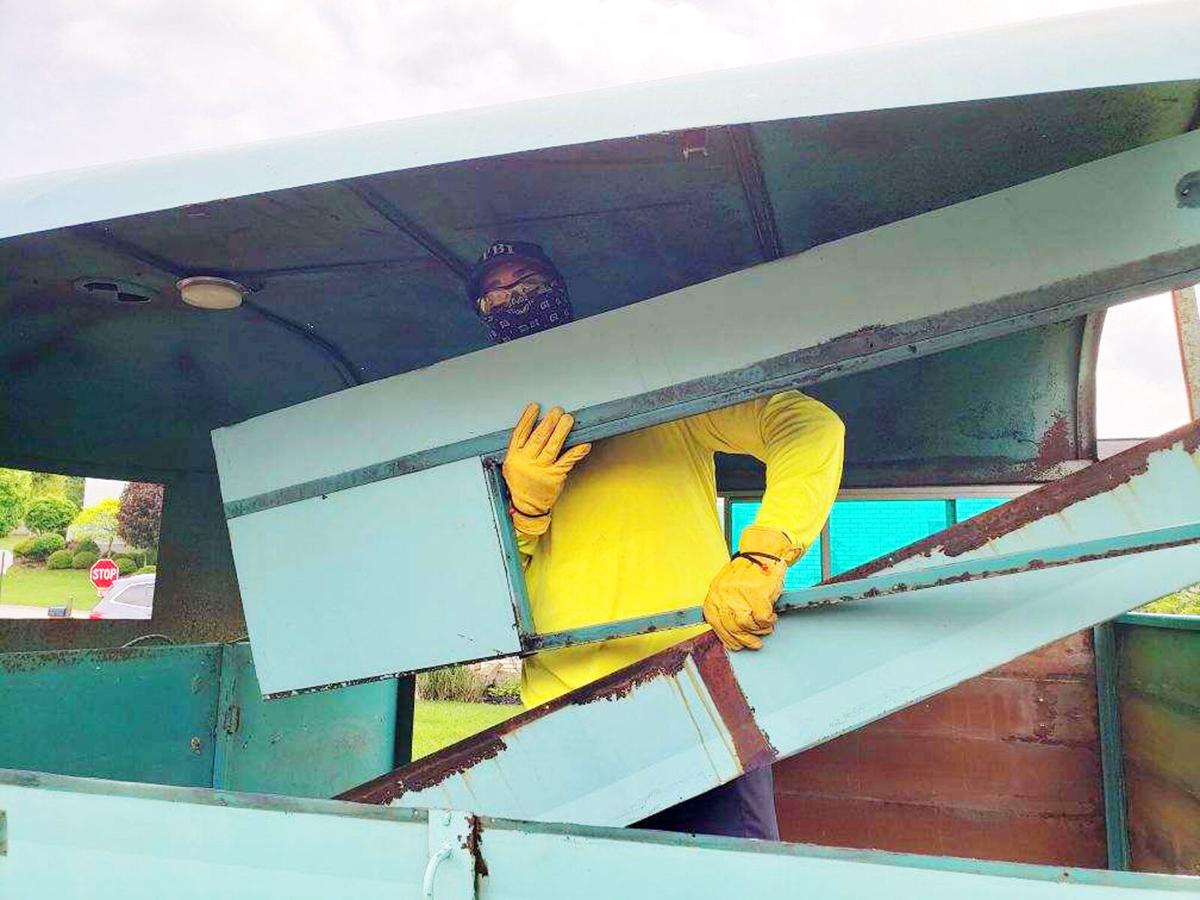 The remodeling effort shapes up with the removal of part of a side of the trailer to make room for a service window. 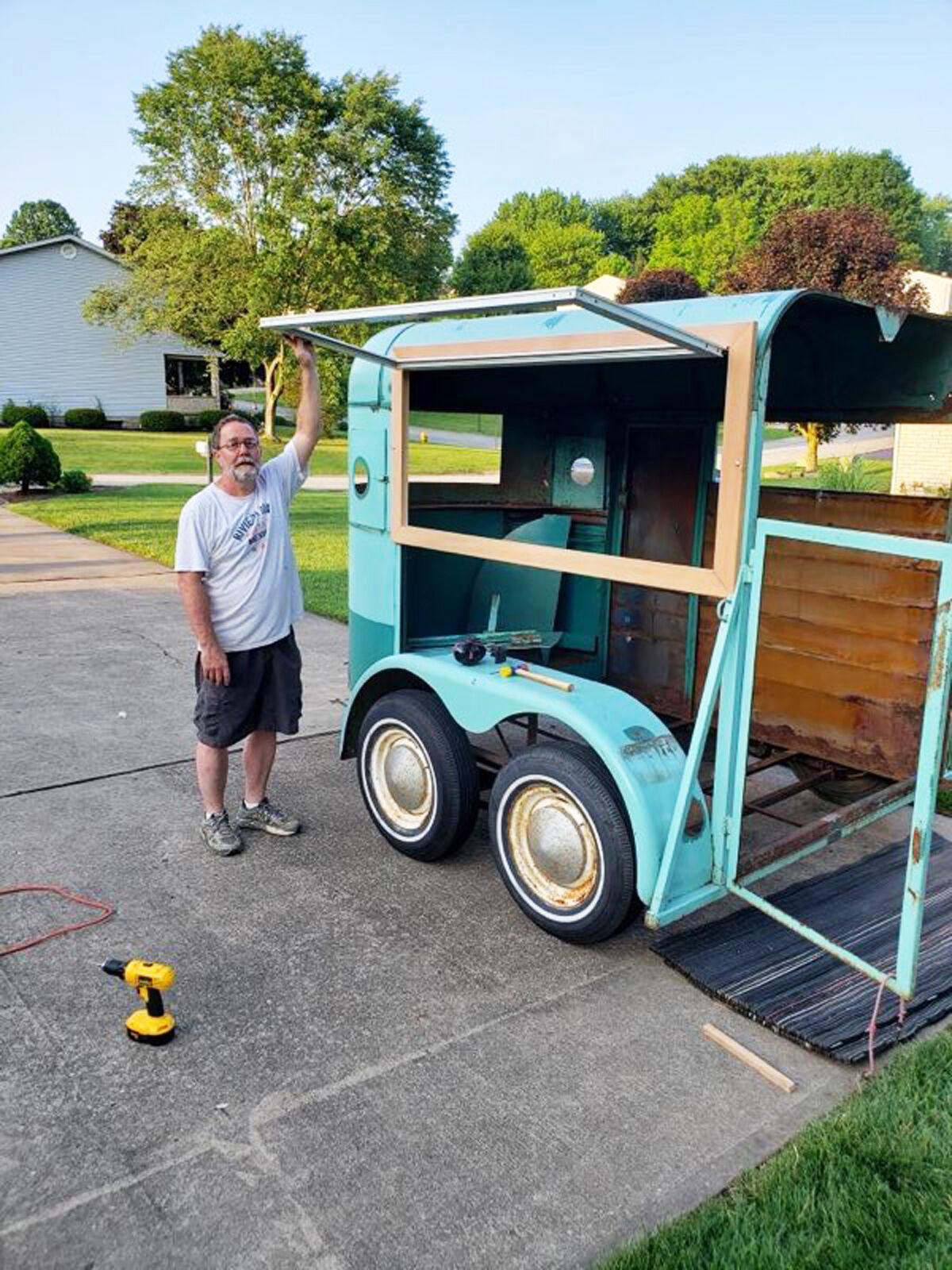 Ryan and Amy Bruckner show the fruits of their investment.

In the beginning, Ryan and Amy Bruckner bought an old pony trailer, in which pigs traveled, too.

Carl Bruckner has a look at the condition of the trailer’s floor prior to its overhaul.

Work progresses inside the trailer.

The Parched Pony Mobile Bar Co. is open for business.

The remodeling effort shapes up with the removal of part of a side of the trailer to make room for a service window.

A trip to visit family members in a rural area near Cook Forest State Park turned into the start of something special for South Strabane Township residents Ryan and Amy Bruckner.

“We were making a bend at a corner, and we saw it out across this farmer’s field, at the edge of the wood line,” Ryan recalled. “We were like, ‘Oh, man, look how cool that thing is.’”

The “thing” in question is a trailer for ponies – pigs, too, in this case – built back in 1971, and when the Bruckners took a closer look, they discovered … well, let’s call it unsightly evidence of the animals that were hauled around inside.

“It was this ugly green-bluish color at the time,” Ryan said. “And the floor was rotting out, but I thought it was just perfect.”

Today, the conveyance has fulfilled his vision as the centerpiece of the Parched Pony Mobile Bar Co., the Bruckners’ foray into the catering business, ready to provide a distinctive touch to outdoor gatherings.

Amy actually had seen examples on social media of repurposing vintage horse carriers as portable taverns, and mentioned to Ryan the possibility of doing something similar.

“I thought it was going to be hard to turn that into what it is now,” she said. “But he kind of always tells me, ‘Oh, don’t worry about that. Just trust me.’”

She also trusted Ryan’s father, Carl – he’s a fabricator by profession – to turn the half-century-old trailer into something of which to be proud.

“His dad is really, really good at everything like that and kind of a perfectionist,” Amy said. “And then once I saw the two of them working on it, I just trusted them and knew it would turn out really, really, really nice.”

Besides some time for the trailer at Powell’s Auto Body in Bentleyville for sandblasting and a new coat of paint, Carl and Ryan performed the work themselves, from replacing floorboards to fashioning a new service window to removing an interior wall that once separated traveling pigs from ponies.

“Our goal through the entire project was no shortcuts,” Ryan said. “We wanted everything to look and feel very top-notch and high-end.”

The Bruckners gave the Parched Pony a trial run with half a dozen outdoor gatherings while the weather allowed, and the response would seem to indicate a bright future for the venture.

Speaking of which, another key to the operation has been bar manager Beth Endres, another South Strabane resident. She joined the Bruckners around the time they were feeling the crunch of launching a business on top of their regular full-time jobs.

Oh, and they have four young children.

For Endres, the connection came about through a conversation with friends during a Zumba fitness class.

“I just happened to mention that, as my retirement job, I wanted to reconstruct a pony cart and make it my own bar,” she said. “Lo and behold, sitting there was Ryan’s cousin. She listened to everything I said, and then she got in touch with Ryan. And next thing I know, Ryan is contacting me.”

Ryan, meanwhile, was a teammate on Trinity High School’s football team with Cody Endres, Beth’s son, who went on to play quarterback for the University of Connecticut.

“I loved the idea of working with Beth, and we’re fortunate that she was interested in doing it,” Ryan said.

As for Endres, who actually has quite a while to go before retirement, she is looking forward to working with the Bruckners to trot the Parched Pony out once more, in time for what everyone hopes can be a plethora of post-pandemic parties in the great outdoors.

“It’s good to have the down time right now to plan and get all our ducks in a row,” she said, “and start strong in the spring.”

Inquiries about the Parched Pony Mobile Bar Co. can be directed to parchedponybar@gmail.com.