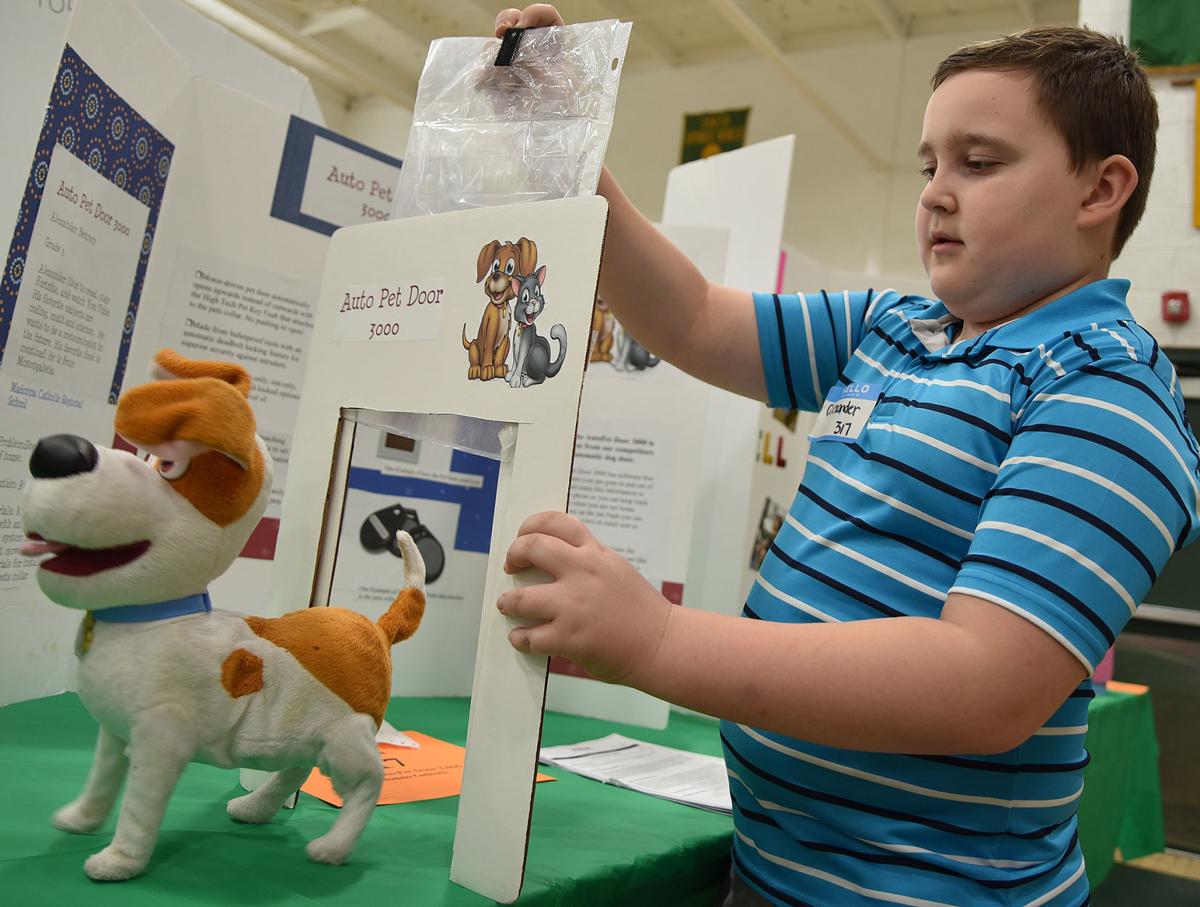 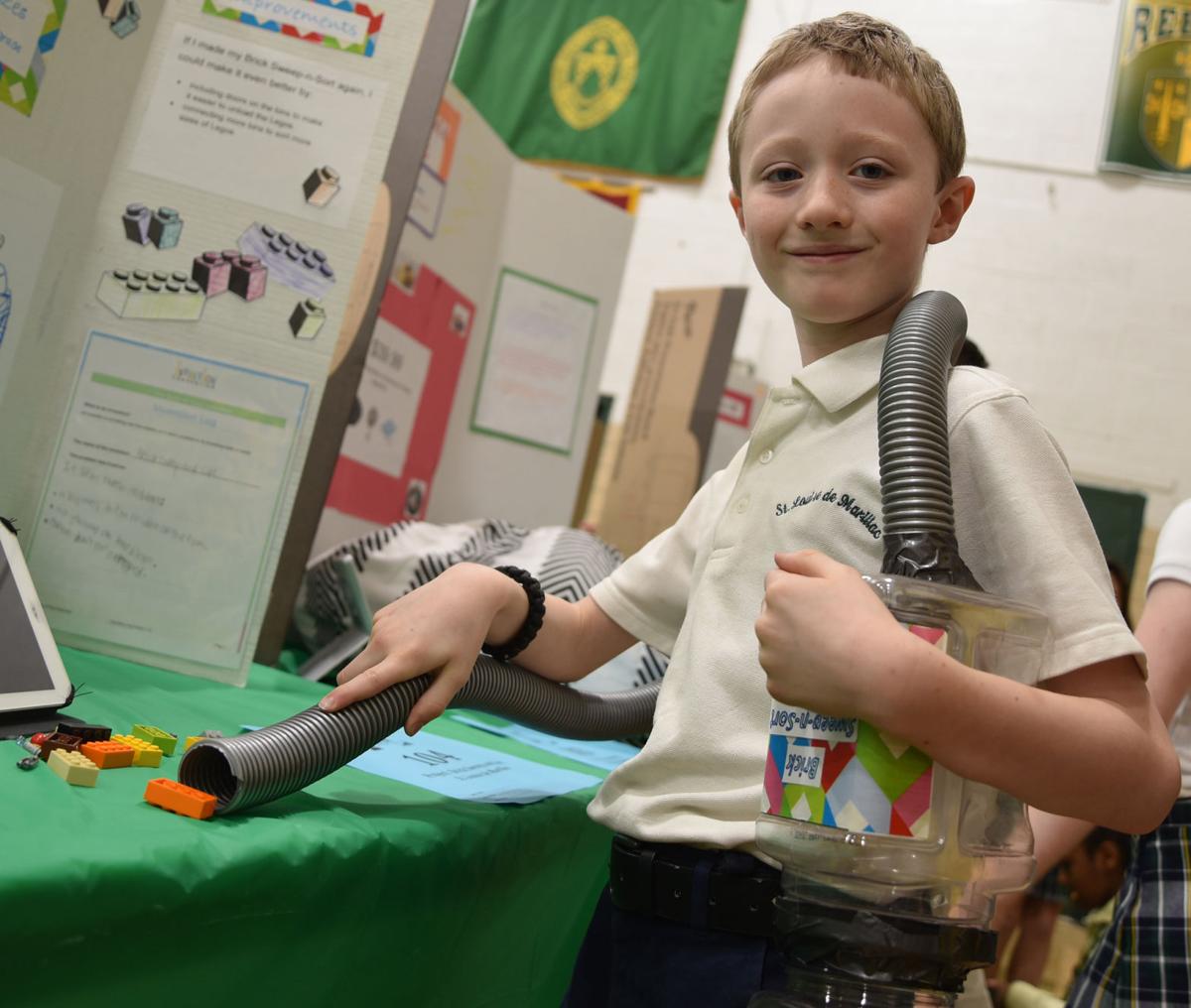 Sam Moze, 8, of Bethel Park demonstrates how his Brick Sweep and Sort device works to clean up messes loose Legos can make in a child’s bedroom or play area. 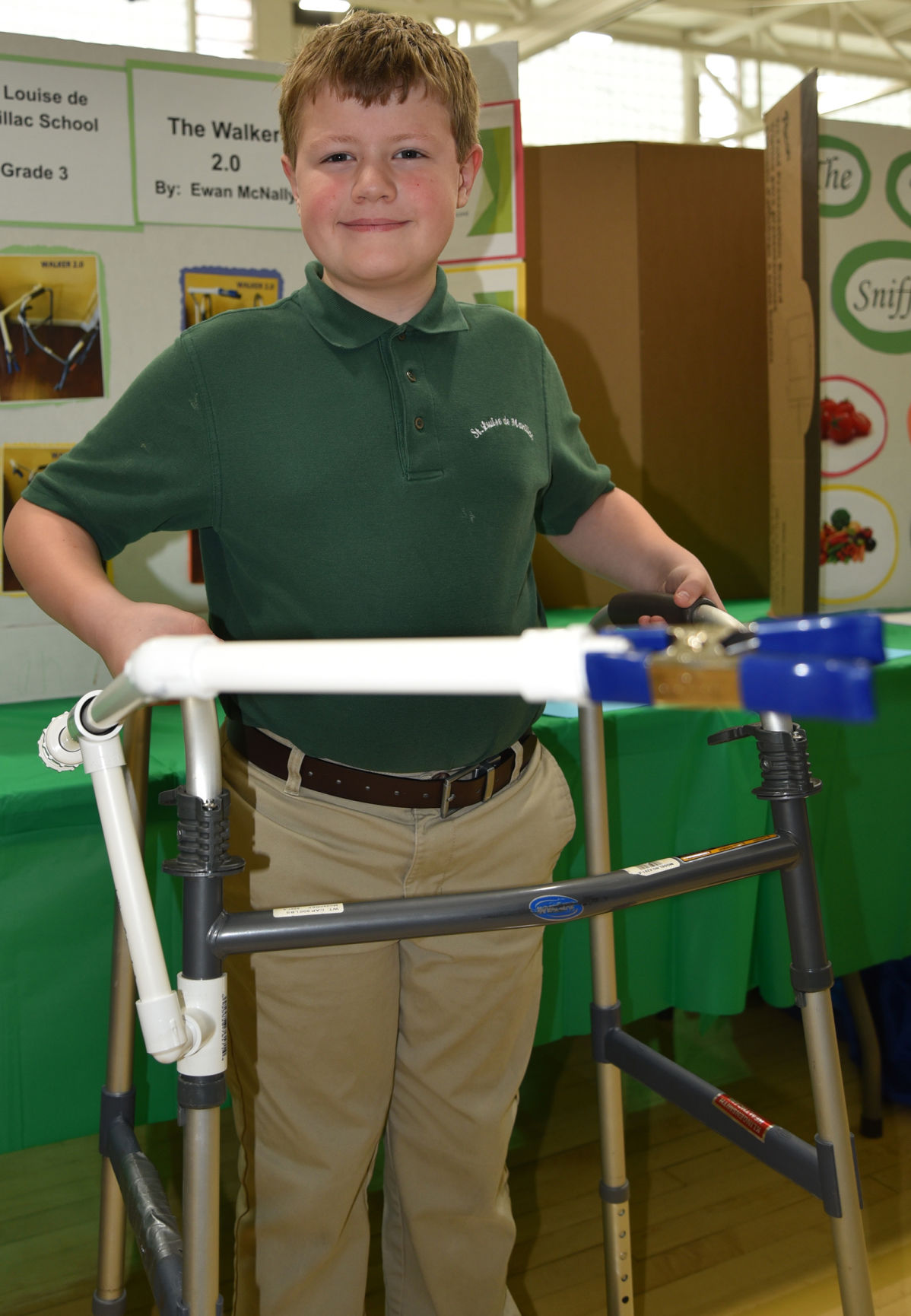 Ewan McNally, 9, of Peters Township designed a better walker. He attached a grabber to the device so as to enable those with limitations to reach objects beyond their grasp. The St. Louise de Marillac third-grade students hopes to refine the invention with more modern and automatic touches. 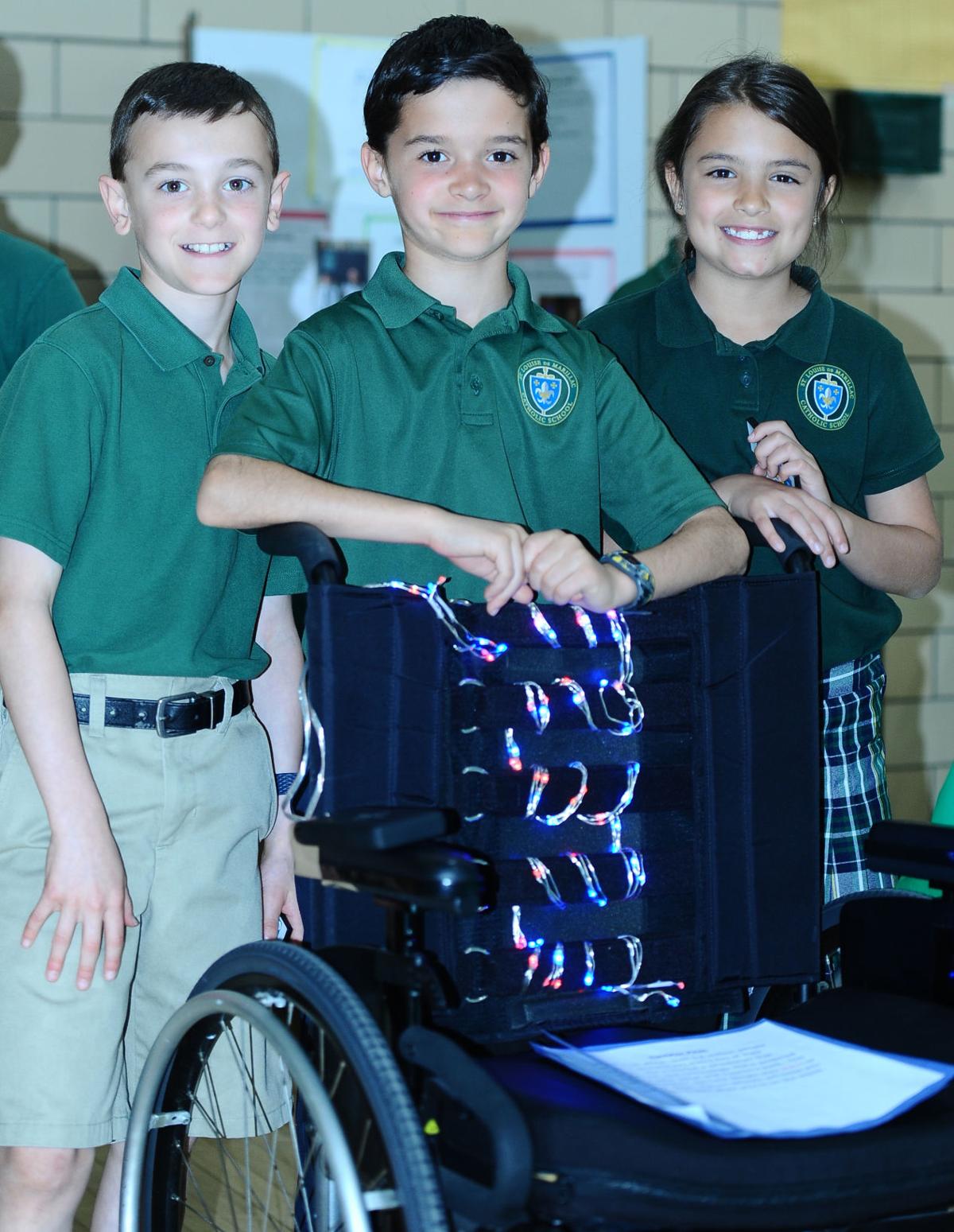 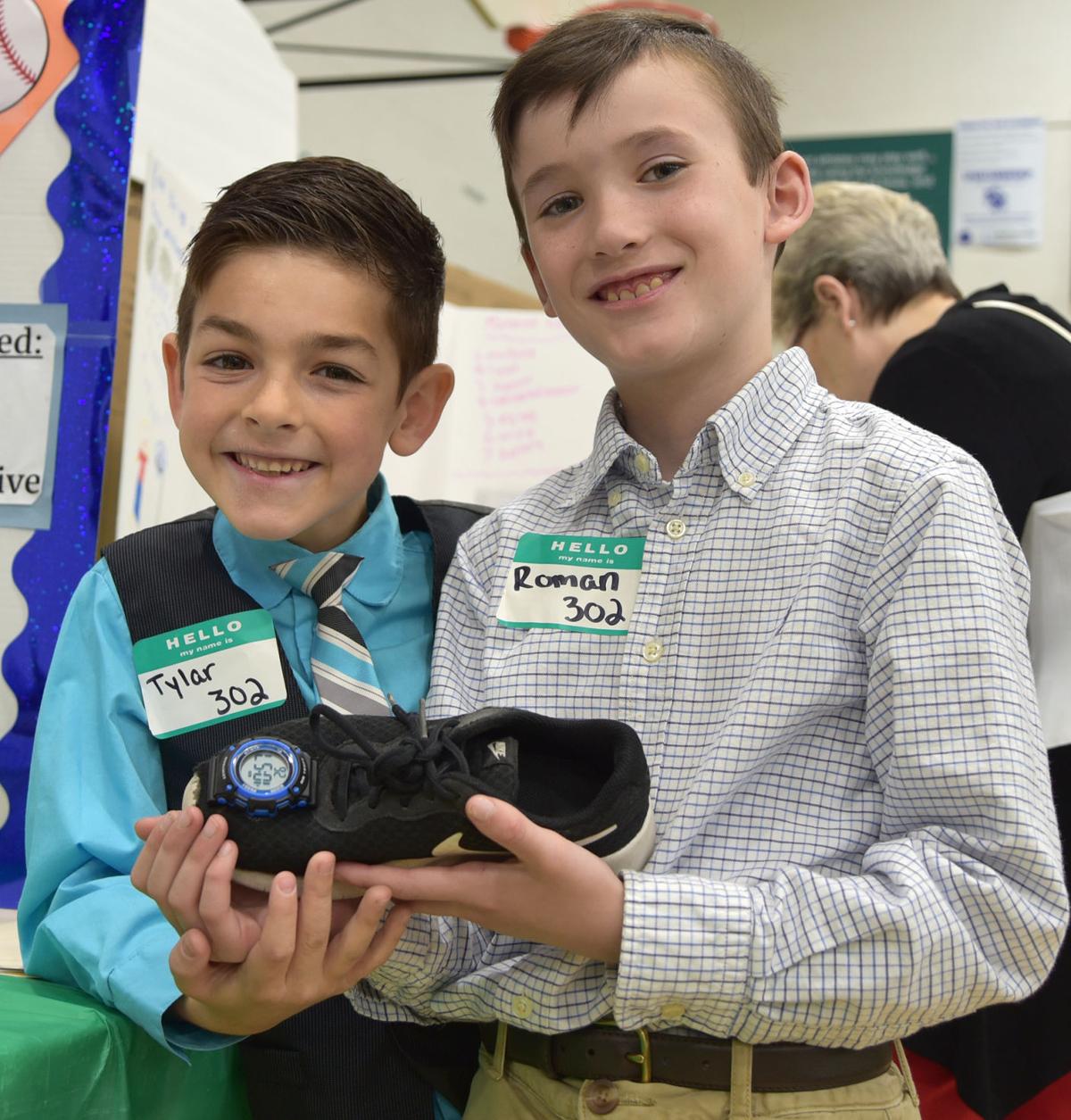 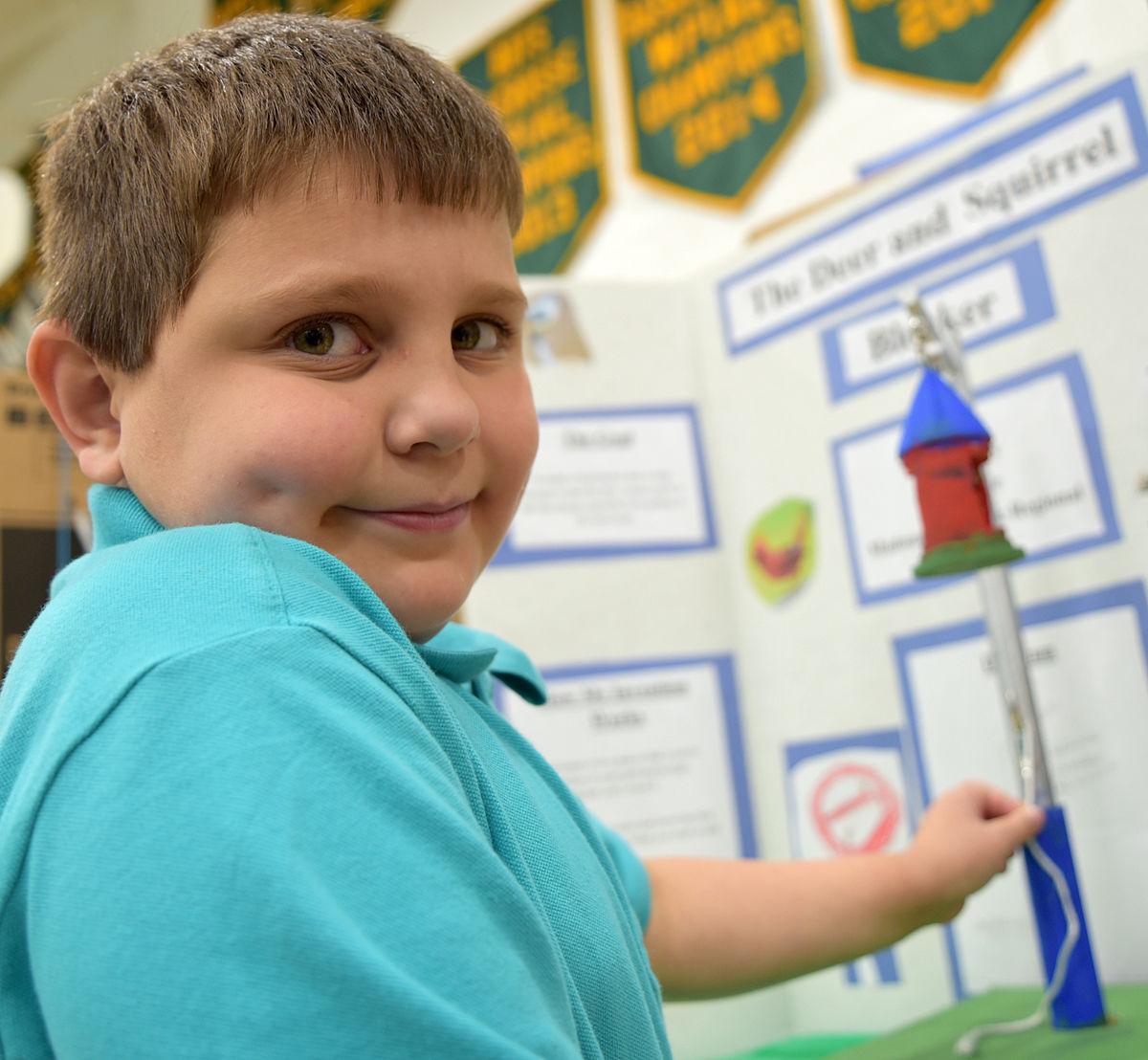 Eli Lindley of Mingo demonstrates his Deer and Squirrel Blocker. While the Madonna Catholic second grade student has a squirrel feeder in which the birds are getting in the way, he created this invention to prevent wildlife from eating food set out for birds. The contraption won first-place honors for his grade during the Invention Convention held at Seton LaSalle High School.

Sam Moze, 8, of Bethel Park demonstrates how his Brick Sweep and Sort device works to clean up messes loose Legos can make in a child’s bedroom or play area.

Ewan McNally, 9, of Peters Township designed a better walker. He attached a grabber to the device so as to enable those with limitations to reach objects beyond their grasp. The St. Louise de Marillac third-grade students hopes to refine the invention with more modern and automatic touches.

Eli Lindley of Mingo demonstrates his Deer and Squirrel Blocker. While the Madonna Catholic second grade student has a squirrel feeder in which the birds are getting in the way, he created this invention to prevent wildlife from eating food set out for birds. The contraption won first-place honors for his grade during the Invention Convention held at Seton LaSalle High School.

Toys, pets and grandparents dominated the themes for the gadgets created by more than 270 grade-school students and displayed at the Invention Convention held recently at Seton LaSalle High School.

“The innovative thinking and creativity of these students was so inspiring,” said SLS principal Lauren Martin. “They were so excited about their inventions and thrilled to present them to others, including their peers.”

The students, representing six Catholic elementary schools in southern Allegheny and Washington counties, eagerly discussed their projects with 20 judges. They talked about how they came up with the invention and what problem it solves. They were also encouraged to mingle with each other and talk about the logistics of working together to improve upon their initiatives.

“The event wasn’t just about putting up the highest score and winning,” said Michael Gianoutsos, director of innovation at SLS. “It was about looking at each other’s inventions, meeting people and making friends, too. It was about seeing what other people are doing and how the students could collaborate with others in the future. Maybe they had a cool prototype and they could continue to work on it with somebody else from another school that had an equally exciting idea. The possibilities are endless.”

For the students, the possibilities regarding their inventions mainly centered around improving lifestyles and freeing up time to pursue other interests.

For example, Alexander Benney, 8, of Monongahela designed the Auto Pet Door. The Madonna Catholic third-grade student owns a dog and two cats. It is his “responsibility” to let the pets out three times a day. Because he said that he doesn’t “like to get up” to do that, he decided to invent the motor-driven door that automatically opens upward, instead of outward, and is regulated by a high-tech key fob attached to the pet’s collar.

“Now they can go in and out on their own,” he explained.

The device was made from bulletproof resin and featured an automatic deadbolt locking system. “For superior security against intruders,” Benney said.

The door also featured a four-way control with in-only, out-only, full-access or closed-and locked options. As any good salesman, Benney expounded further upon the product’s other features.

“Opens only when pet is approaching. Dual-range controls allow you to set independent inside and outside activation distances. Airtight, weatherproof, windproof. Closure cannot be kicked out and easily mounted flush to the wall. Fits large pets up to 100 pounds.”

Benney then demonstrated the door and added unabashedly, “I think my invention’s really cool.”

Sam Moze, 8, of Bethel Park, however, would define his device as neater, literally and figuratively. The St. Louise de Marillac second-grade student created the Brick Sweep and Sort. It vacuums loose Legos and separates them at the same time. Moze’s mother motivated the project.

“She’s always getting on my case to clean my home and Legos can get all over the place. Especially for me, I noticed that I have Legos all over my room and sometimes it’s really, really hard to clean them up. So I invented this,” Moze said, posing proudly with his machine.

Ewan McNally, 9, of Peters Township was impressed with his classmate’s sweeper. “I’m not as big into Legos as I once was,” said the third-grader, “but I thought that one was a pretty good idea.”

McNally added the Invention Convention, too, was “a very good idea because it can show your creativity and what people think should be invented.”

McNally thought a better walker could be designed for individuals with difficulty grasping objects. So he simply affixed a grabber to its handle.

“My granddad (Richard Lanz) has a hard time picking things ups and reaching things from shelves, so I thought he needs this on his walker,” McNally said. “I think this will help a lot of old people, especially when they are coming out of the hospital.”

McNally hopes to refine the design to allow the grabber to reach the ground. Eventually, he hopes to replace the buttons with motors so that the operators can better control the motions.

McNally, who may follow in his father’s footsteps and become an engineer, sees the potential in his project. “If it actually comes to market, then I am going to be super happy and so proud of myself,” said the son of Molly and Tom McNally.

McNally is equally proud of his other classmates. Caius Belldina, Perri Hoffrage and Colton Ginsburg created a heating and cooling system for wheelchairs. “That invention right there,” McNally said, “is really beneficial to people in wheelchairs.”

The trio of third-graders noted that there are 3.6 million people in the United States that are in wheelchairs. They also mentioned they had relatives and friends that have disabilities and are limited in their mobility. Their device used car seat technology, a battery pack and a solar panel to control temperatures.

“When it’s hot out, you would be able to cool down. If it was really cold out, then you could turn on the hot and you would heat up,” they explained simply while demonstrating the multicolored device. “We think this will help a lot of people.” They added that they all want to go into creative careers, “because we like inventing things.”

Roman Moschetta of Monessen and Tyler Rodriguez from Charleroi like playing sports as much as they enjoy improving upon their pastimes. So the Madonna Catholic Regional School second graders designed Cool Time. Because most leagues do not allow athletes to wear jewelry, including watches, the pair designed a shoe that tells time. Attached to the top of an athletic shoe, is affixed the face of a digital clock.

“So you just look down at your shoe and you can see your time,” they said. “The only thing you can’t play with it is soccer because you have to kick with your toe,” said the avid runners.

Moschetta says he wants to continue making inventions or maybe he will become a patent lawyer. “There are lots of jobs that I want to be doing,” he said.

If Rodriguez doesn’t grow up to be the next Sidney Crosby or Christiano Ronaldo, then he says he’ll opt for being a president, likely of a big corporation. “Then you could make this on sale,” he said pointing to the shoe, “and you could put it in different brands.”

Enthusiasm such as Moschetta and Rodriguez displayed during the assembly excited the organizers of the event as well as spectators. “The energy was amazing,” said Martin. “I am grateful to the schools for promoting innovation and critical thinking, and for making the time and putting in the effort to support these awesome kids.”

“It was wonderful. Fabulous,” added Betty Parnell, who came to support her granddaughter, Sabrina. She designed a hairbrush with a built-in cream rinse. Used in the shower, it tames unruly hair, especially the type prone to tangle. “These kids are good. Their ingenuity is inspiring. There was something unique about each project. It’s amazing how much knowledge is here. It’s great,” she said. “The schools are really preparing the students for the future. They are really putting a lot into educating the students. I could have never done this. I would have been calling my dad.”