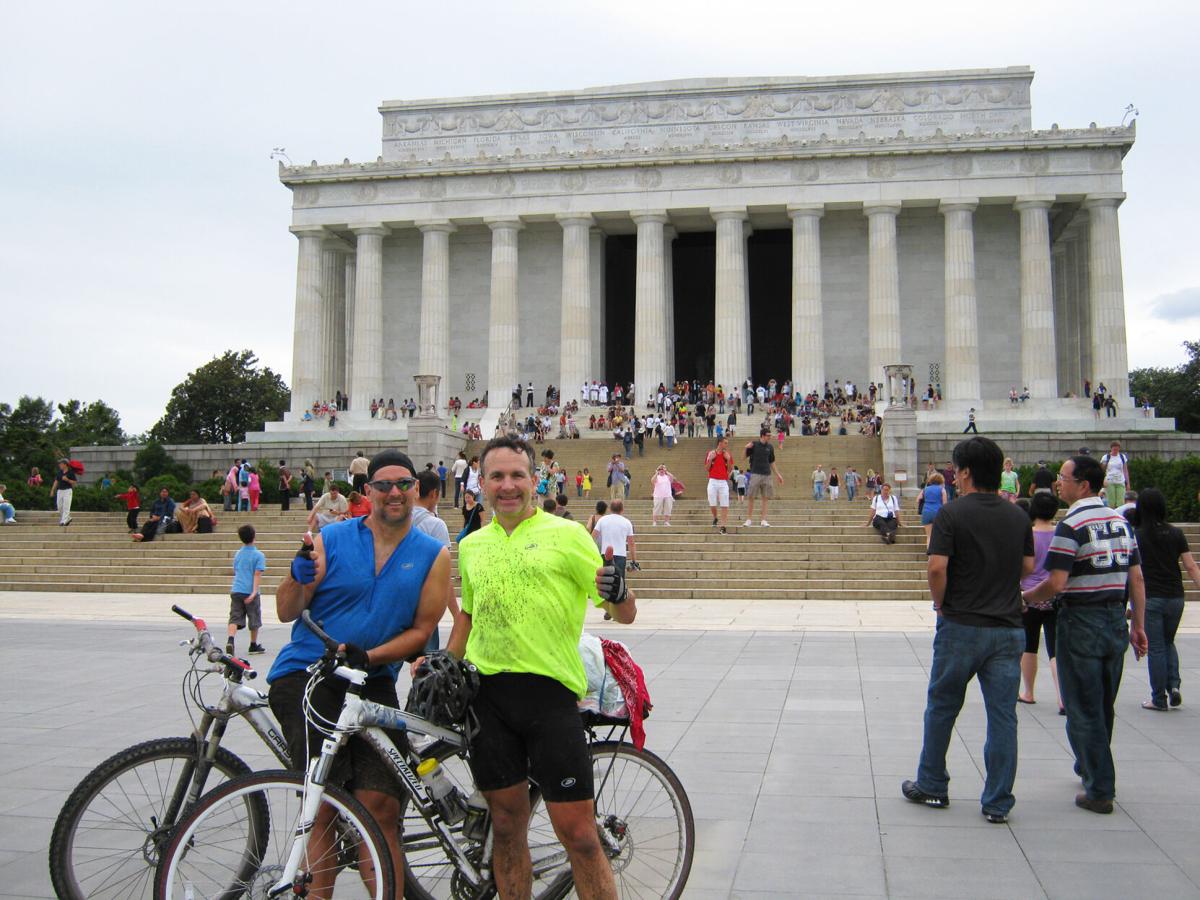 Finish line at the Lincoln Memorial, 2010 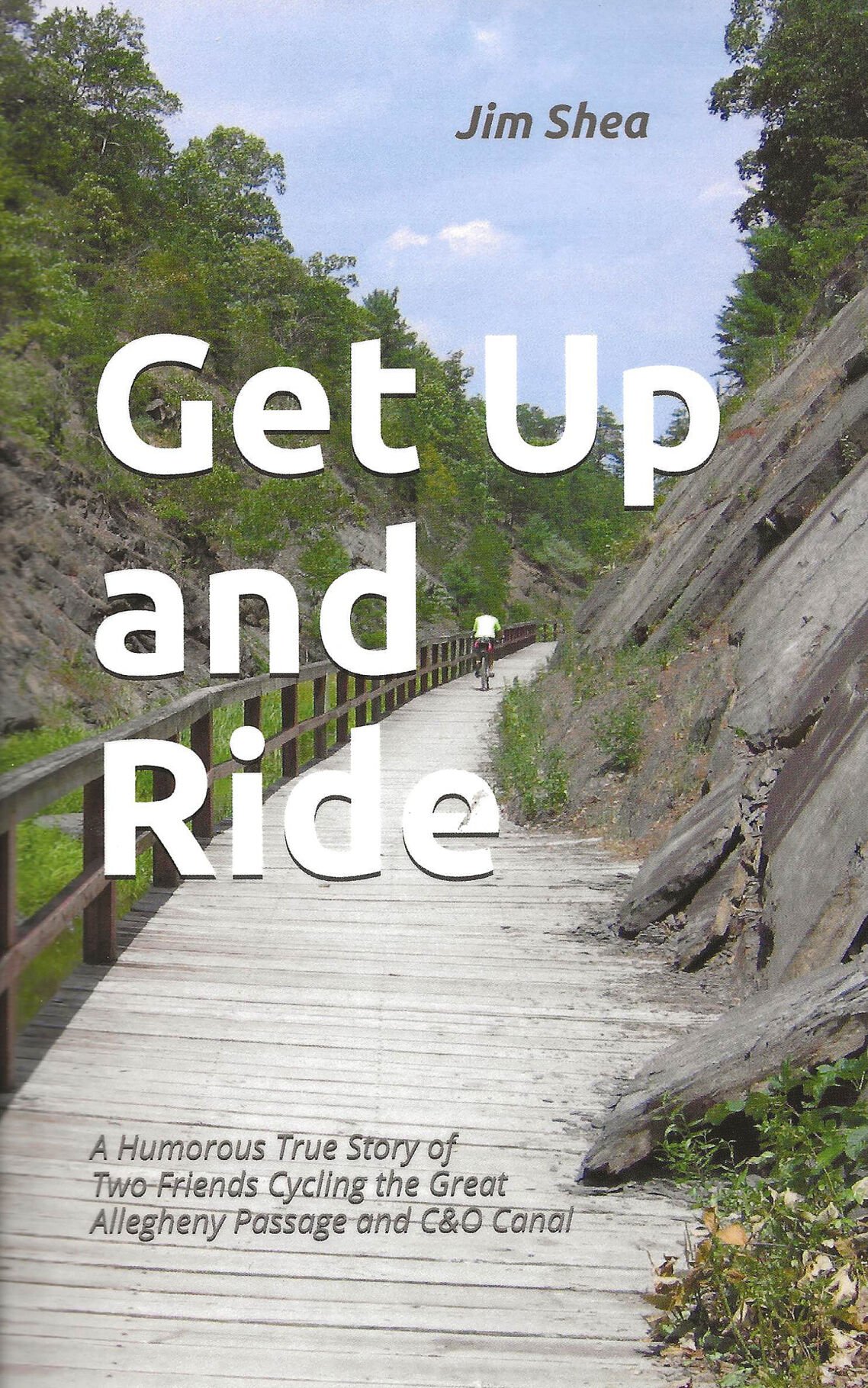 Jim Shea's first book is more than simply a travelogue. 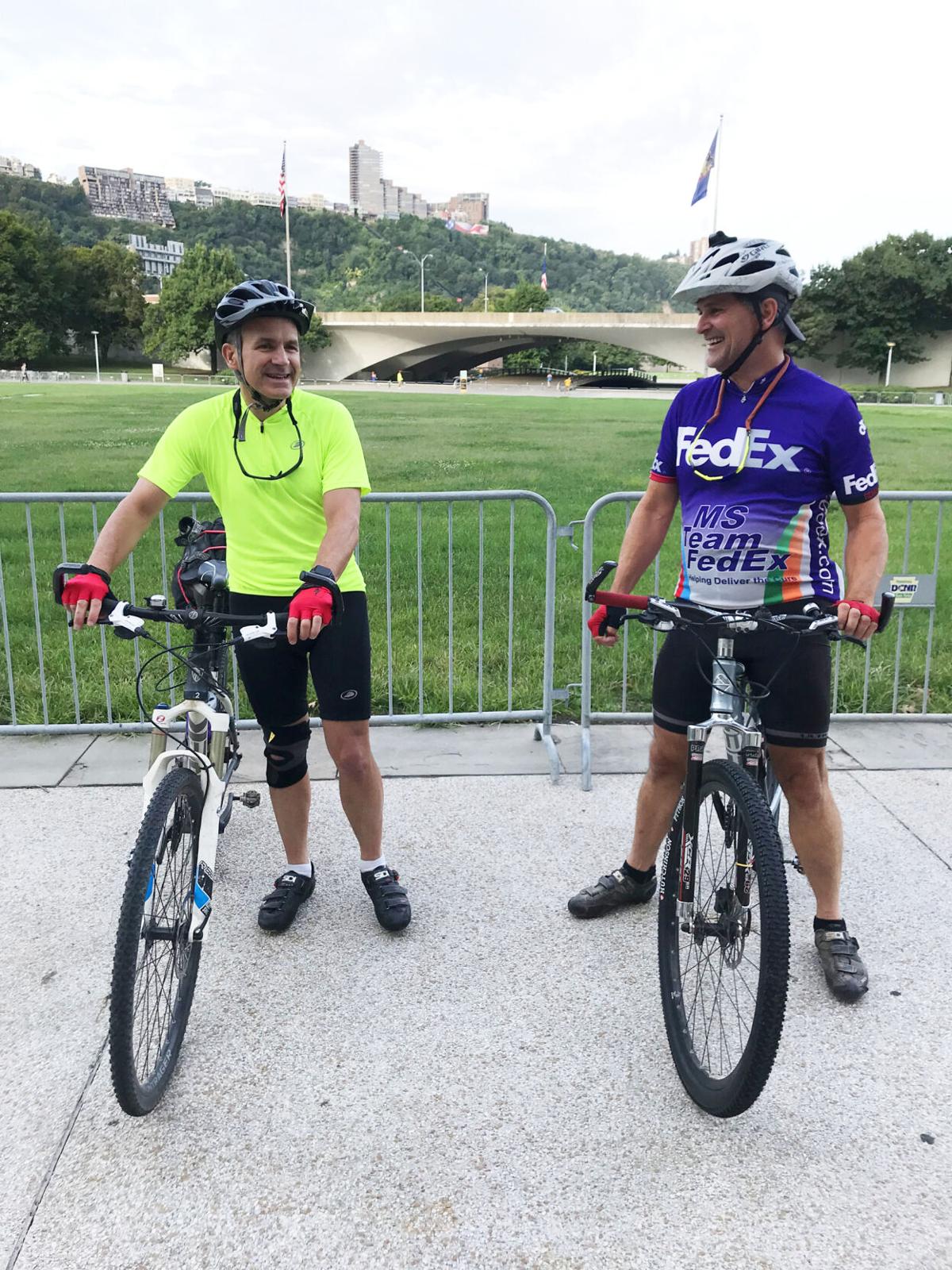 Jim Shea, left, and Marty Moldovan get ready to start their 2010 trek at Point State Park in Pittsburgh. 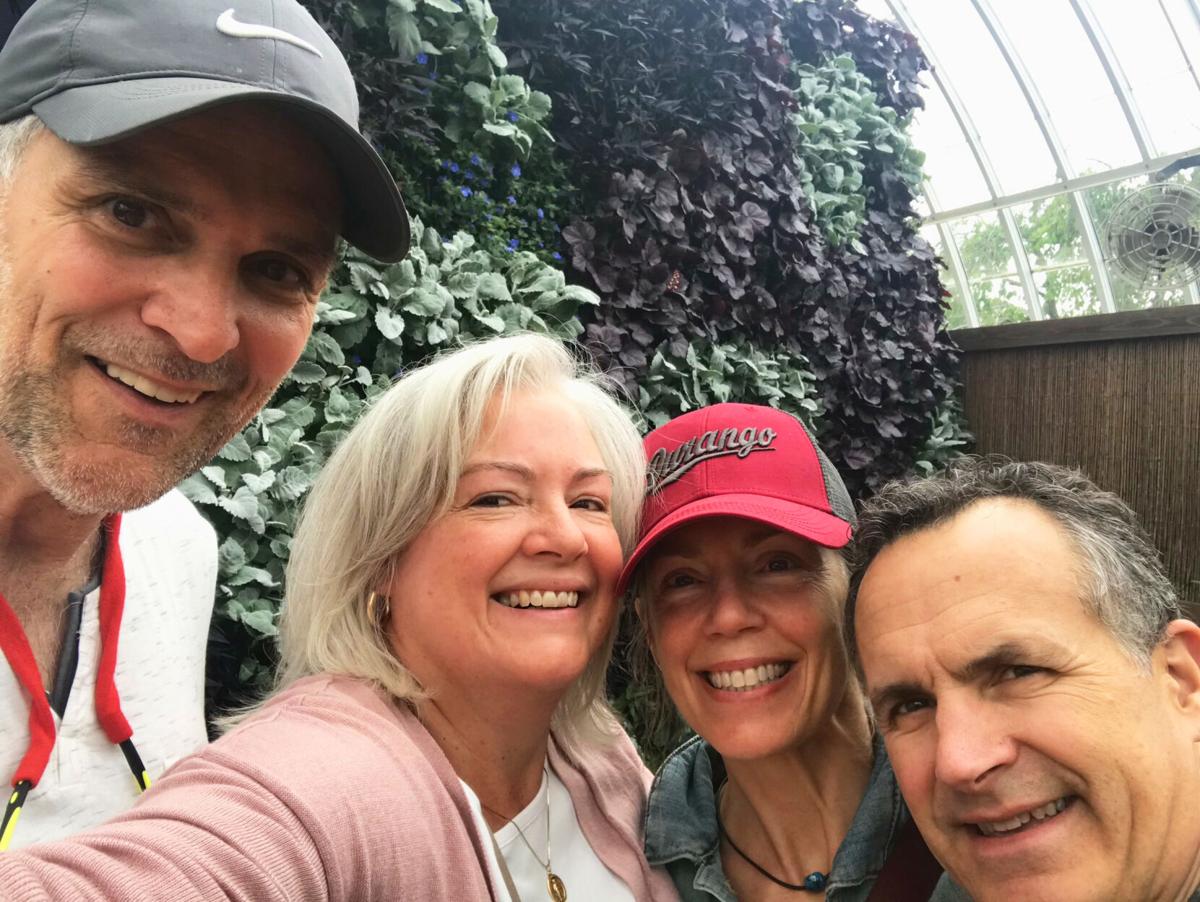 Marty and Belle Moldovan, and Katie and Jim Shea 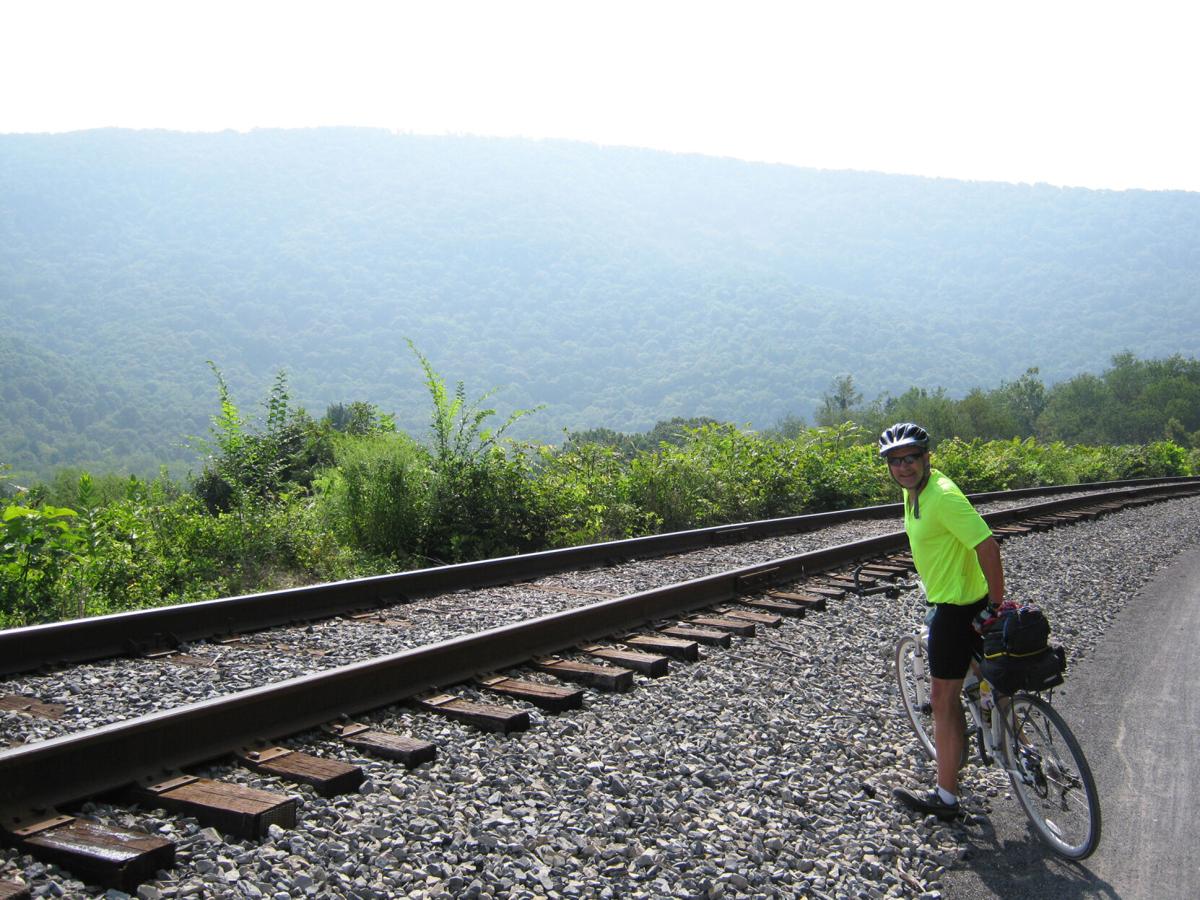 Jim Shea is pictured during the 2010 trip at the Horsehoe Bend near Cumberland, Md. 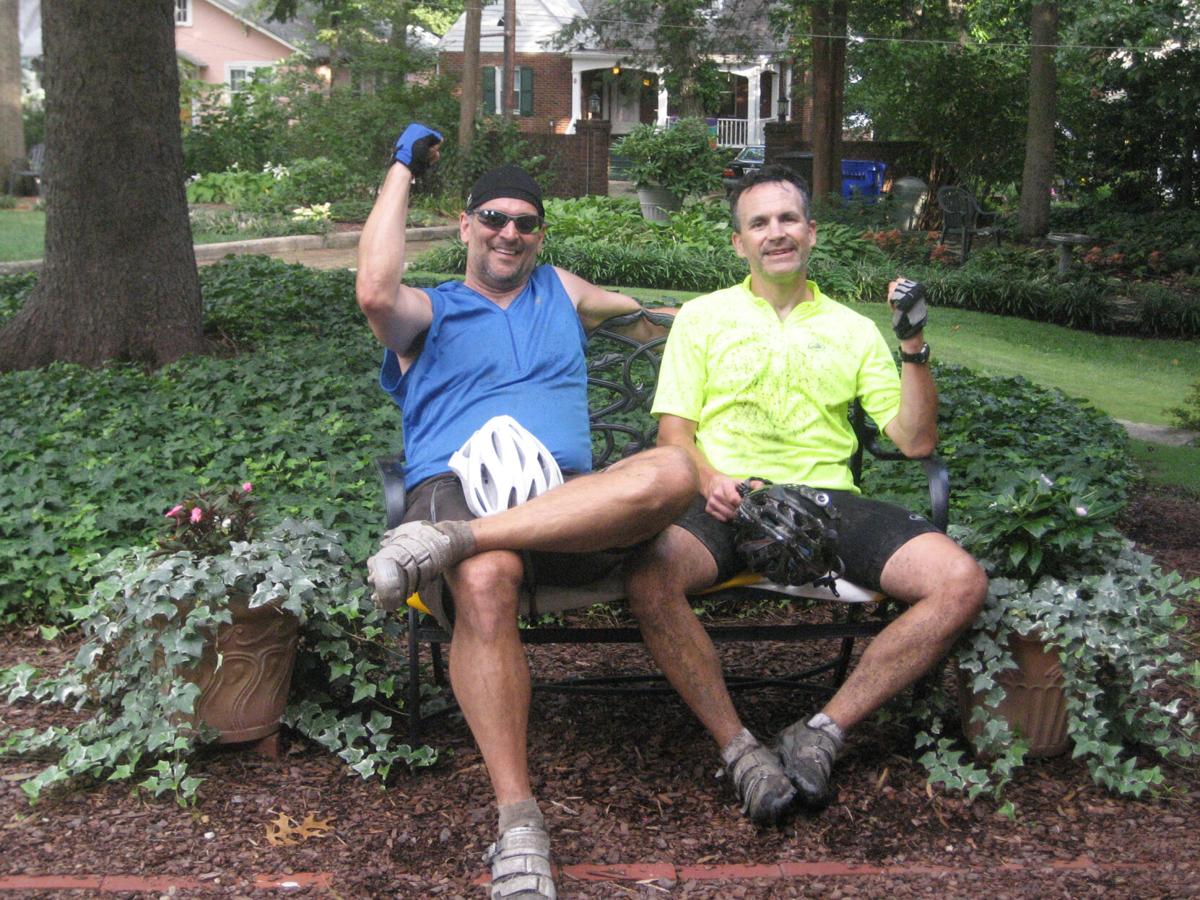 Finish line at the Lincoln Memorial, 2010

Jim Shea's first book is more than simply a travelogue.

Jim Shea, left, and Marty Moldovan get ready to start their 2010 trek at Point State Park in Pittsburgh.

Marty and Belle Moldovan, and Katie and Jim Shea

Jim Shea is pictured during the 2010 trip at the Horsehoe Bend near Cumberland, Md.

The first words of the Prologue to Jim Shea’s first book purport:

“I have never written a book or even a short story. In fact, I haven’t even read many books.”

As the bad guys would say to Maxwell Smart:

“I find that hard to believe.”

Shea’s “Get Up and Ride,” ostensibly a travelogue of a five-day bicycling trip along the Great Allegheny Passage and C&O Canal trails, reads like he’s been down the path of authorship before.

That’s because the Upper St. Clair resident and his traveling companion, brother-in-law Marty Moldovan, both like to tell a good story, and it has translated well into book form.

Far from representing a “we did this … and then we did this” approach, “Get Up and Ride” integrates plenty of local color and history to complement a series of mostly amusing anecdotes in presenting a narrative that tends to draw in readers pretty much immediately.

And it tends to hold their attention consistently.

“A number of people have read this book who hadn’t read a book in like five years, 15 years, 20 years,” Shea said. “And they say this is an easy-to-read book. It draws you in, and it brings you some laughs and fun and joy.”

Actually, that was his intention.

“It’s such a tough time these days, with COVID and politics and everybody stressed and feeling negative,” he said. “And I thought this would bring a little bit of laughter.”

He and Moldovan made the bike hike in 2010, 335 miles from Pittsburgh to Washington, D.C. As the book relates, they stopped at some interesting places and met some fascinating people along the way.

In Shea’s view, the trip actually represents a trio of journeys: the cycling trek, obviously, along with him venturing to his boyhood him in the D.C. area.

“The third journey is me learning from Marty and learning to be a little more like him,” Shea said about his brother-in-law, who takes a rather laid-back approach to life. “I’m an active person, always on the go, traveling, working 70-hour weeks. What it forced me to do is get out of my comfort zone, slow down and appreciate the moment.”

In fact, the book mentions how Moldovan advised Shea not to wear a wristwatch anymore. And to this day, he doesn’t.

The genesis for “Get Up and Ride” was during a family vacation – Katie Shea and Belle Moldovan are sisters, so Jim, Marty and both families went – in 2012, two years after the epic expedition. Shea started batting out some recollections on his laptop, and he returned to it the following summer. Then he began to add more during business trips, until the content grew to about 40 pages’ worth.

“Belle and Marty were over for dinner one time, and I brought it out. They didn’t know I was working on it. Katie, my wife, was surprised by it, too,” he recalled. “I said, ‘Look what I’ve been working on,’ and they just howled. Marty just thought it was hilarious. So Marty was game for it. He said, ‘Yeah, go for it.’”

They were involved the rest of the way.

“Although my name is on the cover, this book was a total family project and a labor of love which we have thoroughly enjoyed over the last couple of years,” Shea wrote.

“This book gave her something to be really excited about,” Shea said. “She got into it, and I involved her in it, too. She read it. She would make editing suggestions and things like that. She says, ‘That book got me through COVID, basically.’”

And she’s not finished. A violin player, Phyllis is working with her son, a guitarist, on music for the audio version of “Get Up and Ride.”

Along with making for an entertaining read, the book is serving another purpose.

Part of the proceeds are going to the Allegheny Trail Alliance, a coalition of seven trail organizations in Southwestern Pennsylvania and western Maryland that is charged with promoting and enhancing the Great Allegheny Passage, which ties into the trail system of the Chesapeake & Ohio Canal National Historic Park.

“They’re just treasures. They’re amazing. And I wanted to raise awareness and get more people excited about doing that,” Shea said. “You don’t have to do it in five days. Some people take seven days, eight days, 10 days.”

Locally, he is offering similar support for the Montour Trail Council, which oversees the path the pair used for training prior to heading toward D.C.

“I’ll remember a conversation as it happened, and I’ll be able to, even a couple of years later, like play that back,” he said, explaining about Moldvan: “He has a visual memory. I don’t. He will remember exactly what a scene looked like. The combination of the two helped us re-create these scenes in the book.

And they do so quite effectively, especially considering the whole “never written a book” scenario.

“Get Up and Ride” by Jim Shea is available at www.amazon.com. For more information, visit www.Facebook.com/getupandridebook.