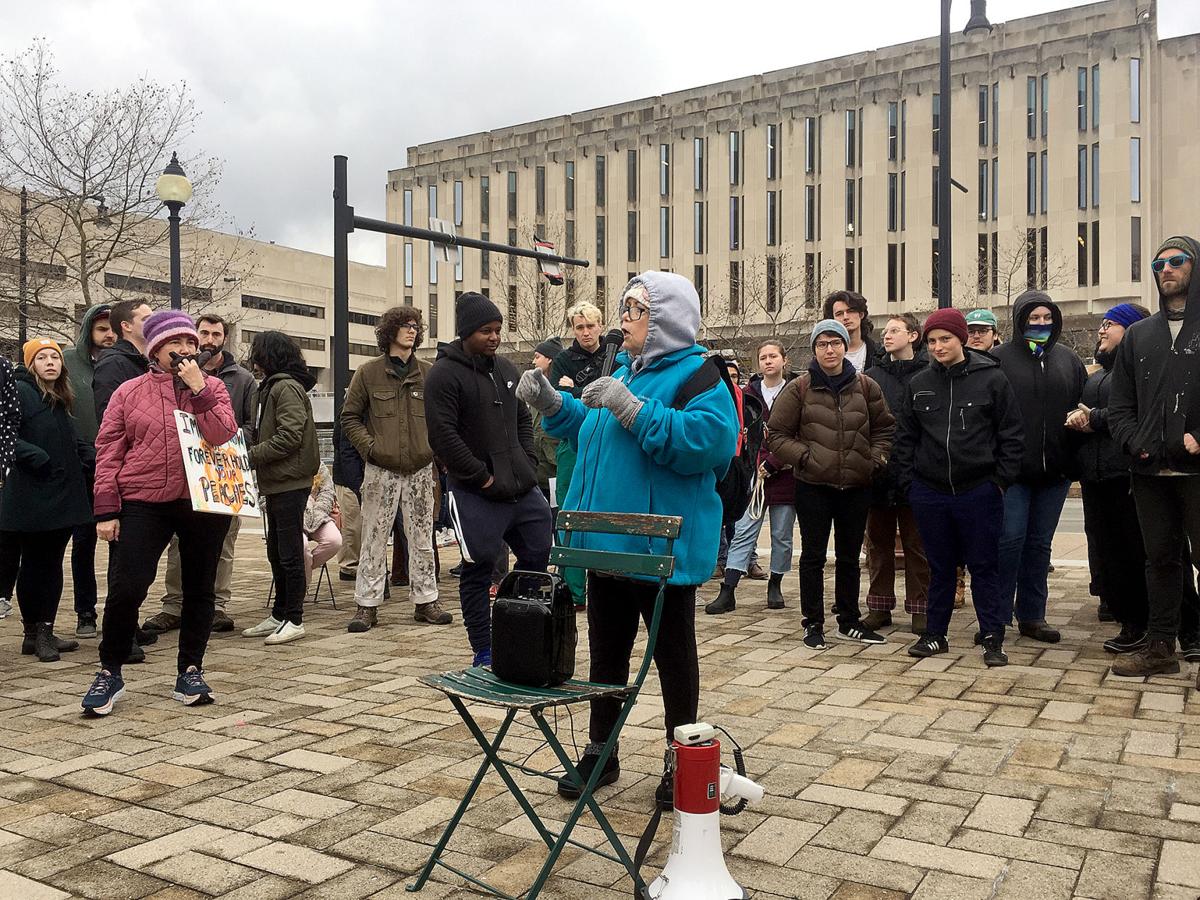 Diane Santoriello of Oakmont, whose son was killed in Iraq, addresses the crowd on Saturday during an anti-war protest in Pittsburgh. 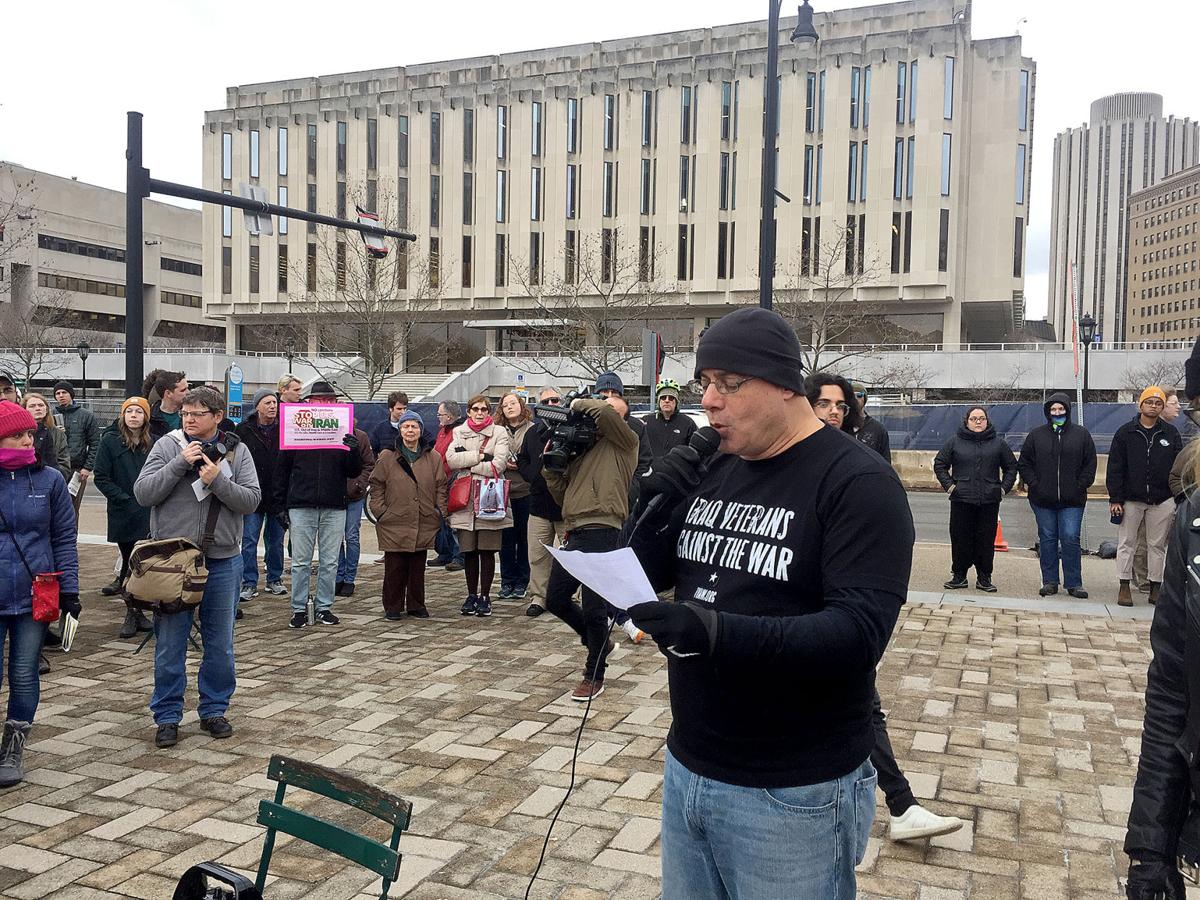 The Rev. Paul Dordal of Pittsburgh, an Iraq War veteran, speaks about the “20/20 vision” he acquired during his time overseas. He spoke on Saturday during a protest in Pittsburgh’s Oakland neighborhood. 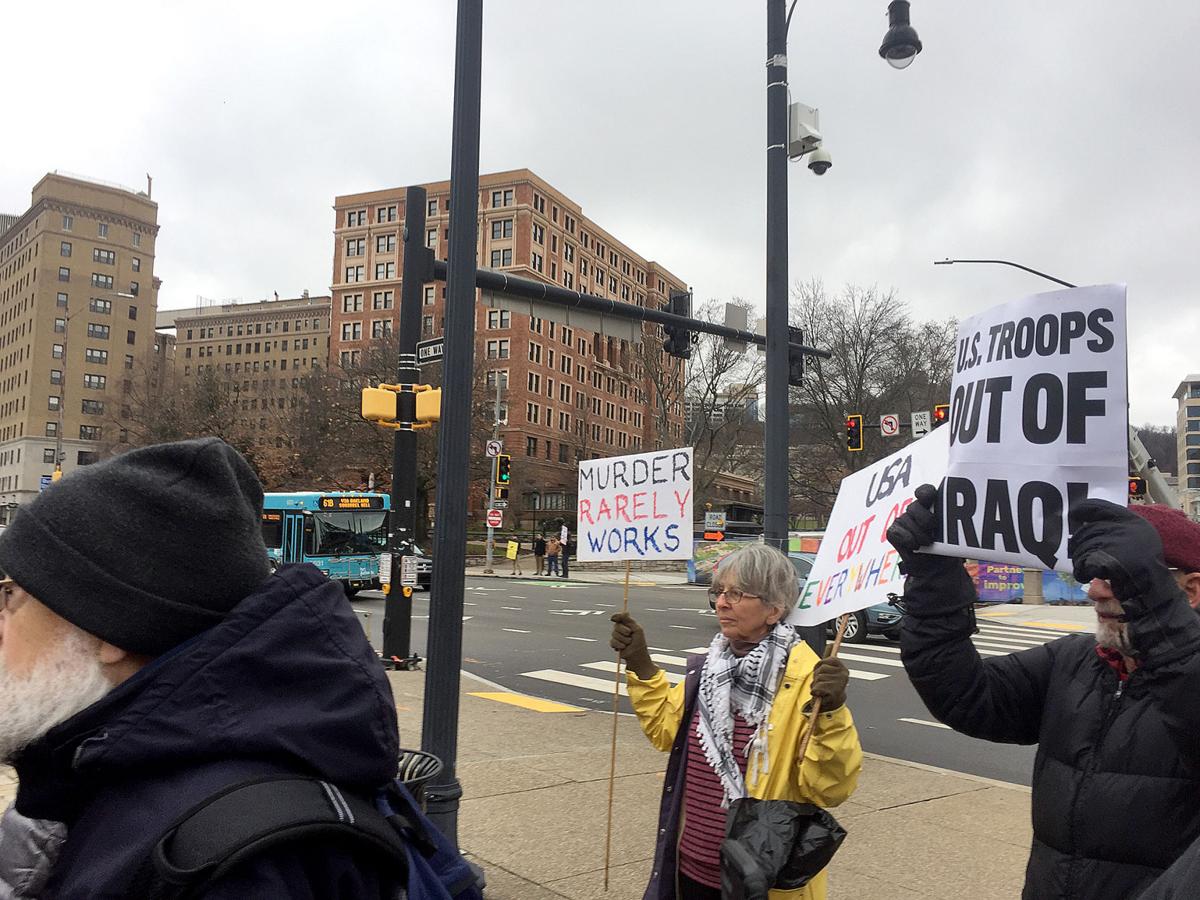 Diane Santoriello of Oakmont, whose son was killed in Iraq, addresses the crowd on Saturday during an anti-war protest in Pittsburgh.

The Rev. Paul Dordal of Pittsburgh, an Iraq War veteran, speaks about the “20/20 vision” he acquired during his time overseas. He spoke on Saturday during a protest in Pittsburgh’s Oakland neighborhood.

Gold Star mother Diane Santoriello could easily build her politics around seeking revenge for her son’s death 15 years ago. She doesn’t.

“It’s déjà vu,” she said Jan. 4 at an anti-war protest in Pittsburgh. “We’ve got people lying. We have Democratic leaders who are dancing around, not coming out (and) fully condemning (President Donald Trump). What he did was wrong. It’s just wrong – wrong, wrong, wrong.”

Santoriello, of Oakmont, said the improvised explosive device that killed Army 1st Lt. Neil Santoriello Jr., 24, in Khalidiyah, Iraq, was believed to have been traced back to Iran.

Still, two days after a U.S. drone had assassinated Iranian Gen. Qassem Suleimani in a strike at Baghdad International Airport, Santoriello at the demonstration opposed the U.S.’s military actions. (The Iranian military responded Jan. 7 by attacking two bases in Iraq with missiles, although no casualties were reported. President Trump said Jan. 8 that the United States did not intend to respond to that attack.)

The event attracted a crowd estimated between 150 and 200 people on Schenley Plaza in the Oakland neighborhood. It was organized by the local chapter of the anti-war ANSWER Coalition, and one of dozens across the United States that day.

The Pentagon followed the assassination with an announcement it would send 3,000 more troops to the region.

“The people of Iran and Iraq are not our enemies,” said Taylor Goel, of Swissvale, local ANSWER coordinator. “The people of Iraq and Iran are not the enemies of the working people in the U.S. Workers in the U.S., the only war we should be waging is class war.”

At one point, protesters from a knot of a few people who appeared to be holding their own rival event – which included a poster with the words “DEPORT KUSHNER” with Stars of David on either side of a drawing of Jared Kushner, who is Jewish – crossed Forbes Avenue and got into a shouting match with some members of the larger group who called them “Nazis” until the interlopers walked away. Kushner is a White House advisor and Trump’s son-in-law.

But the main protest brought together a range of people whose shared goal was to avoid further additions to the body count that’s heaped to somewhere between 500,000 and 1 million in the post-9/11 U.S. wars in Iraq and Afghanistan. That figure includes thousands of U.S. troops and hundreds of thousands of civilians.

In an interview following remarks he made to the audience, Shahid Faroughi, of the Pittsburgh Anti-Imperialism Committee, described himself as supporting Marxism, Leninism and Maoism. He said the weekend event was only a “good start.”

He said nothing short of “people’s war, revolution” would end the “unjust wars” that benefit the ruling class. He said such a popular uprising was inevitable, if not necessary in the next year or two.

Others tied their activism to their lived experience. Following a combat deployment to Iraq in the late 2000s, the Rev. Paul Dordal of Pittsburgh became active in the veterans’ anti-war movement.

The former Army chaplain and Syro-Chaldean priest said he received “20/20 vision” during his time in-country, when he “realized that the United States is the aggressor and provoker of the majority of conflicts in the world,” and the people who suffer because of those incursions are not enemies of the American people.

For many in Schenley Plaza, events of the preceding few days were evocative enough to merit skepticism.

“We were lied to in Vietnam; we lost in Vietnam,” said Emily DeFerrari, of Pittsburgh, who held signs in each of her hands: “MURDER RARELY WORKS” and “USA OUT OF EVERYWHERE.”

“We were lied to about Iraq; we lost in Iraq,” she added. “We lost in Afghanistan. What makes us think we’re going to win by telling the same lies about Iran? It makes you wonder, are these not accidents, but is this what the United States is trying to do to perpetuate our war machine? Because that’s what we export.”