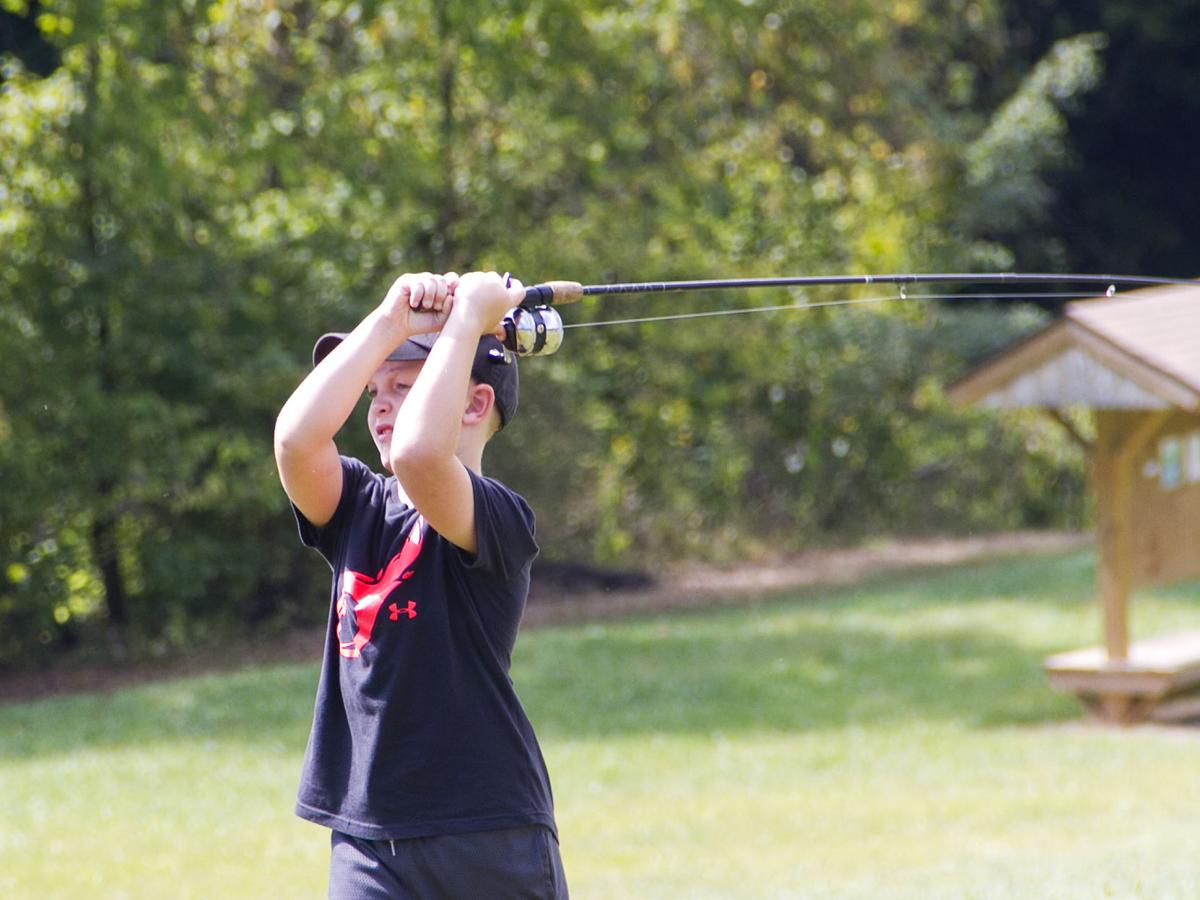 Finn McKigney practices casting during the family fishing program at Canonsburg Lake hosted by the Pennsylvania Fish and Boat Commission. 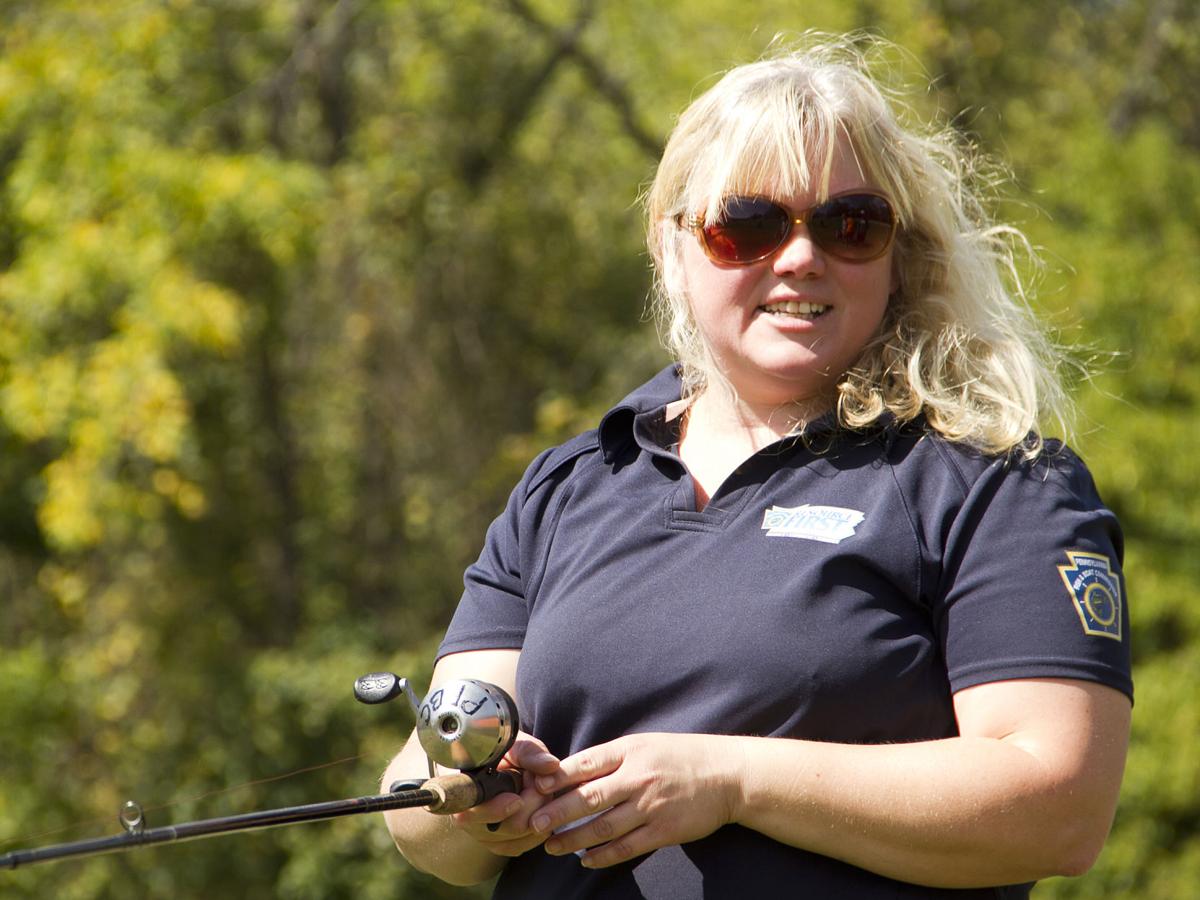 Mandy Smith, education specialist for the Southwestern Region of the Pennsylvania Boat and Fish Commission, discusses how to cast safely and effectively. 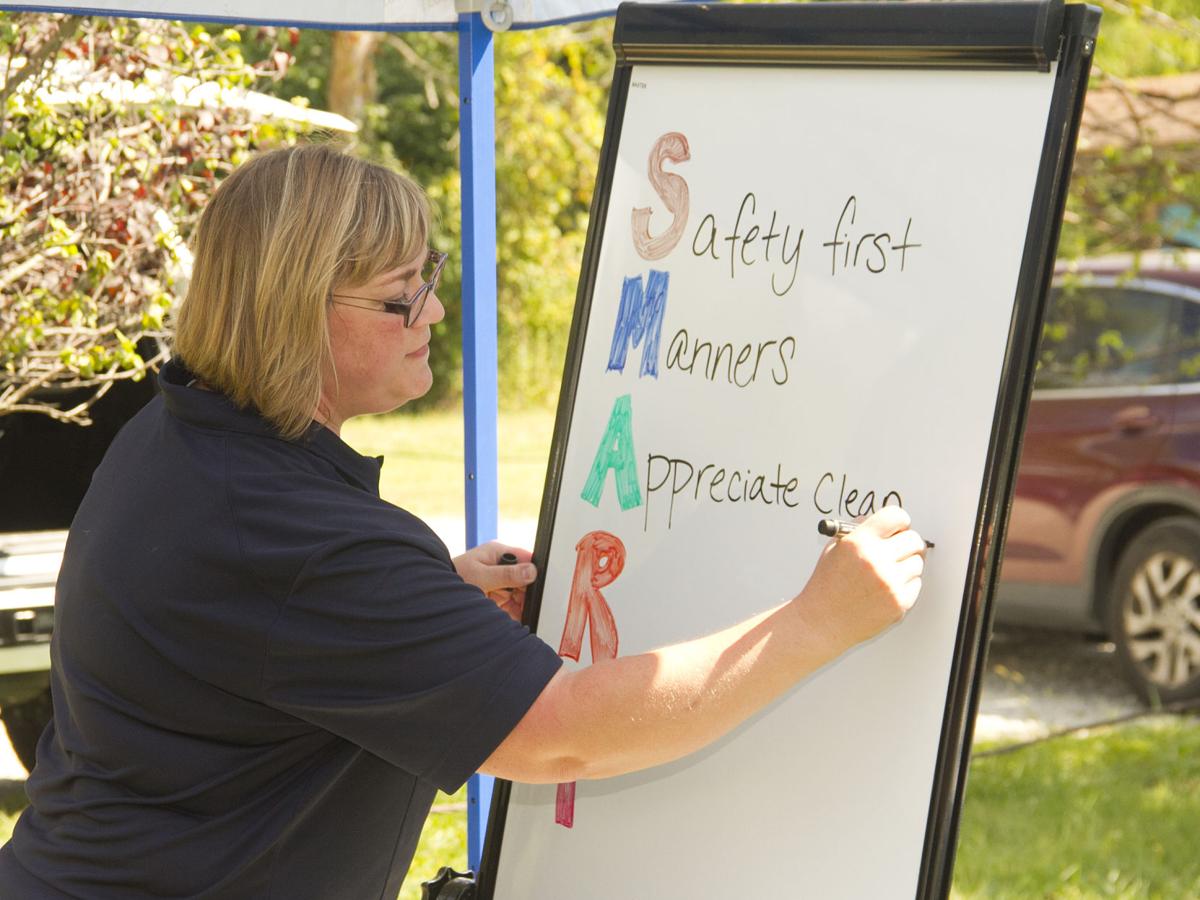 Kristi Niekamp, environmental interpretive technician for the Southwestern Region of the Pennsylvania Fish and Boat Commission, gives a presentation on the SMART approach to fishing. 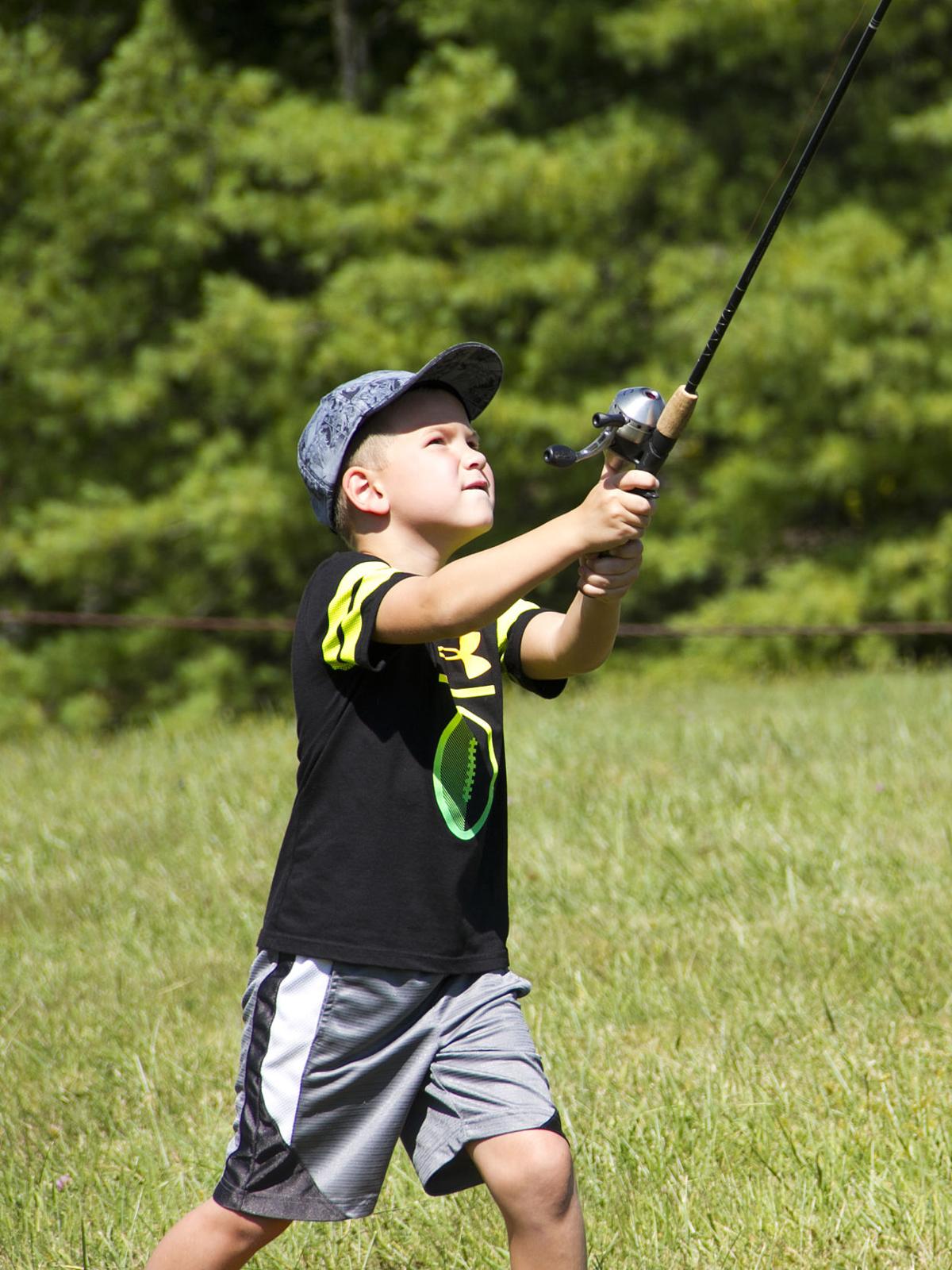 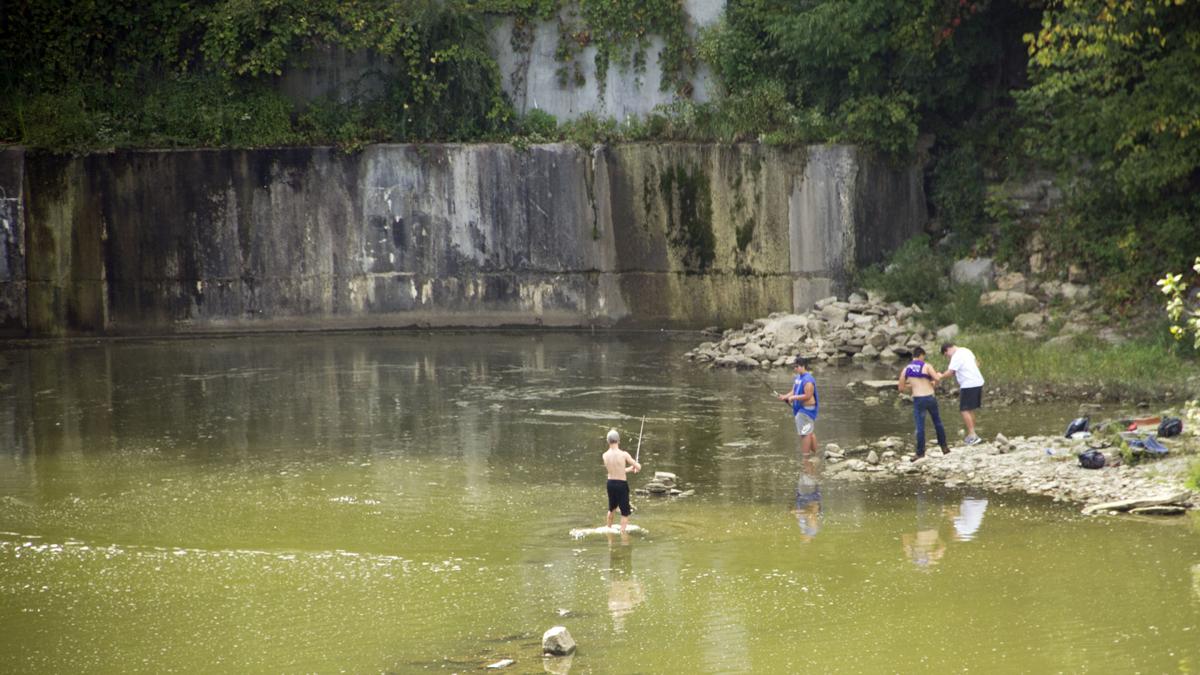 Finn McKigney practices casting during the family fishing program at Canonsburg Lake hosted by the Pennsylvania Fish and Boat Commission.

Mandy Smith, education specialist for the Southwestern Region of the Pennsylvania Boat and Fish Commission, discusses how to cast safely and effectively.

Kristi Niekamp, environmental interpretive technician for the Southwestern Region of the Pennsylvania Fish and Boat Commission, gives a presentation on the SMART approach to fishing.

Kristi Niekamp was talking trash next to Canonsburg Lake in Peters Township.

“We always say that you know where there’s a good fishing spot because there’s lots of garbage,” she said. “Unfortunately, people who go fishing have a poor reputation of not cleaning up after themselves.”

She and others with Pennsylvania Fish and Boat Commission are trying to change all of that.

Niekamp and colleague Mandy Smith visited the lake Sunday for a family fishing program that included an introductory presentation on the SMART approach to enjoying the activity.

Youngsters – adults, too – spent half an hour learning about various aspects of fishing safety, manners, appreciating clean water, releasing fish and teaching others before embarking on sessions for tying tackle knots and practicing casting. Then it was time to hit the water.

Niekamp, environmental interpretive technician for the commission’s Southwest Region, led off the SMART discussion with the most important topic: how to be safe while fishing, starting with a basic consideration.

And once someone is so equipped and it’s time to fish, there are still more aspects to be considered, Niekamp said.

“Pay attention to what you’re doing,” she said. “Always know who is around you. Always know where your fishing gear is.”

Regarding manners, Niekamp suggested a way to improve the not-so-tidy reputation of people who fish.

“Anything that you take out with you, whether you have snacks or drinks or bait containers, make sure you take all of that stuff back with you and throw it away if there’s not a trash can at the lake where you are,” she said.

That includes gear, too.

“Somebody brought us a turtle once that was all tangled up in fishing line,” Niekamp reported. “Luckily, that one we were able to get untangled and released, and it was OK.”

She said, though, an owl in a similar situation was not so fortunate.

At Canonsburg Lake and other waterways, Audubon Society of Western Pennsylvania provides pipes into which line can be discarded.

Littering, of course, also can have an adverse effect on the cleanliness of water, as can the time-honored tradition of tossing in rocks.

“It splashes. It makes a lot of noise and commotion. It also stirs up all the dirt and the sand and the silt on the bottom, and it makes it really cloudy,” Niekamp said, and that’s no good for animals that breathe through gills. “It makes it harder for them to get the oxygen out of the water.”

Another etiquette consideration sometimes applies to family fishing expeditions involving multiple children, and the tendency of some to brag about their catches.

“It makes the other siblings feel bad,” Niekamp said.

She offered some ways to help those who aren’t having much success.

“Ask them what kind of bait they’re using,” she said. “Maybe the bait that you’re using is really working that day, and whatever they’re using is not. And you can share your bait with them.”

And as far as venturing to favorite fishing spots, she recommended a simple act to avoid trouble.

“Most people will not mind if you cross their property to get to wherever you want to go,” she said, “but you always have to ask permission first.”

While some folks fish for a good dinner, others simply enjoy the activity and release their catches back into the water. That’s fine, as long as it’s timely.

Smith, Southwest Region education specialist, shared information about what to do if a fish swallows a hook.

“The best thing to do is cut the line as close as you can to the fish’s mouth,” she said, recommending bringing something that can do the job, even nail clippers. “They have a really good chance of surviving after you do that.”

Smith added another tip in regard to ensuring the survival of fish.

“You never want to throw them like a baseball or a football,” Smith said. “What’s going to happen to that fish when it hits the water if you’re throwing it really hard? It’s going to do a belly flop. Who’s done a belly flop in the pool? It hurts, right?

She and Niekamp looked for a particular takeaway by program participants.

“Teach others,” Niekamp said. “Hopefully, something that you’ve learned today or will learn today, you’ll be able to teach someone else one day when you go fishing.”

The Canonsburg Lake Restoration and Improvement Association looks to mitigate the effects of silt and debris collection.