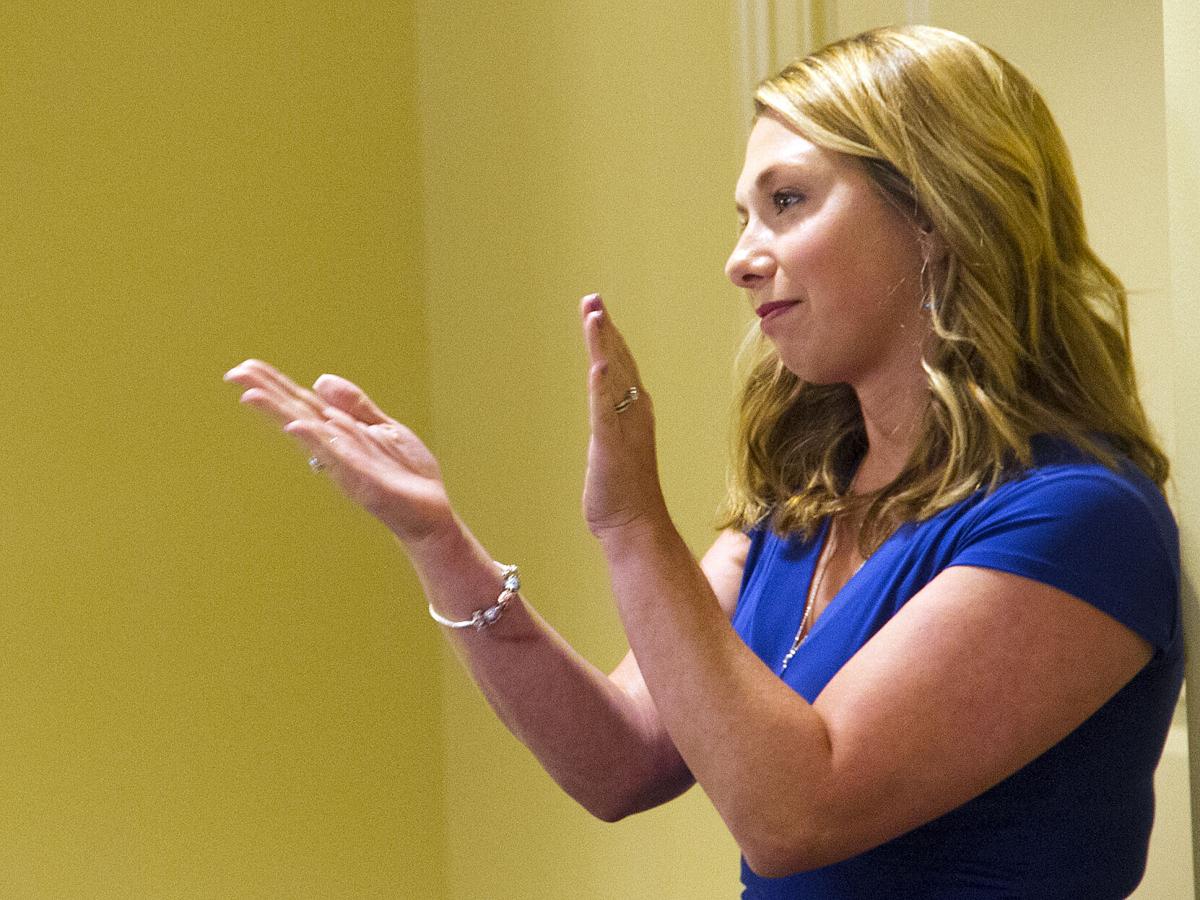 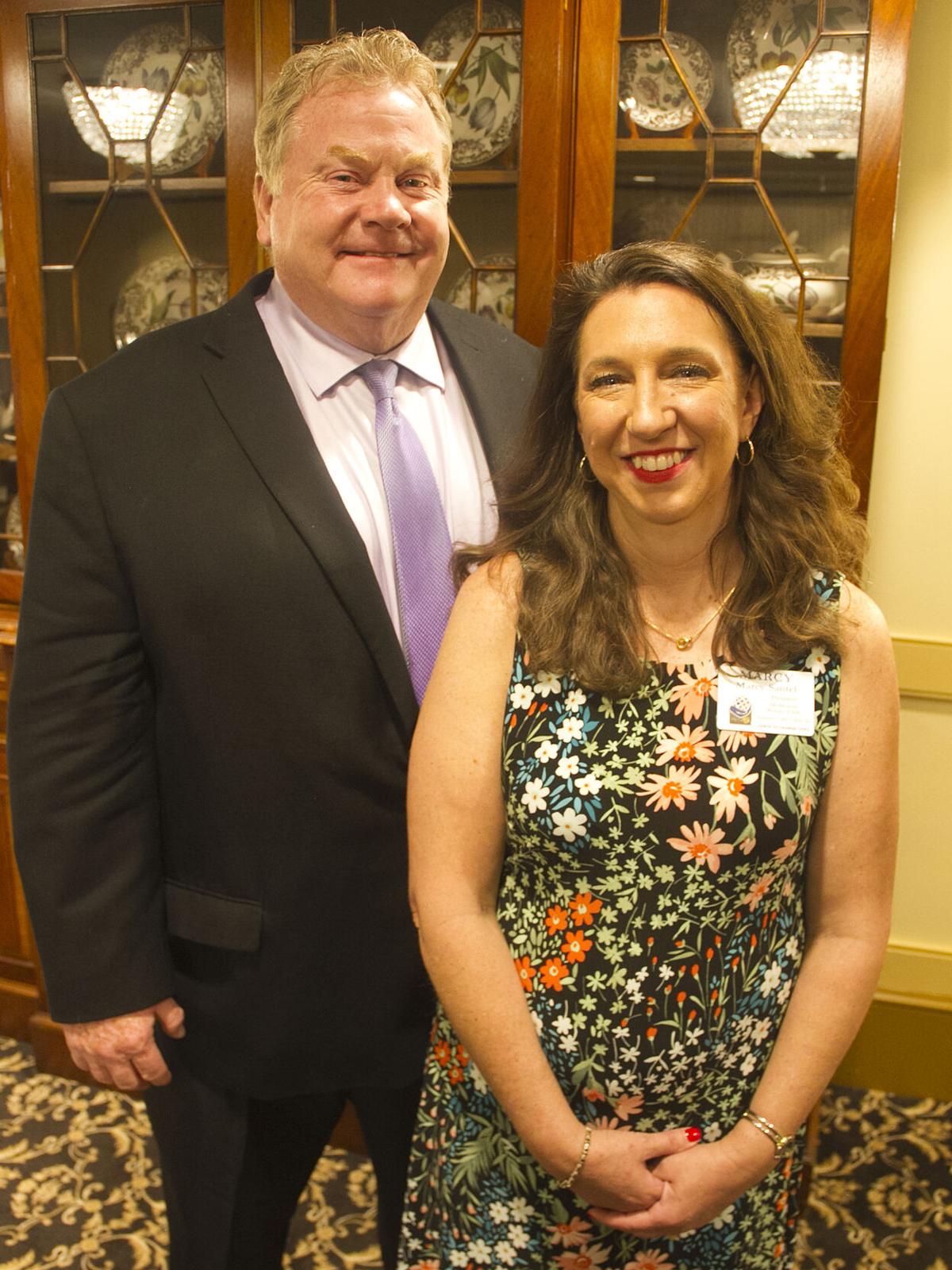 Marcy Santel and her husband, David 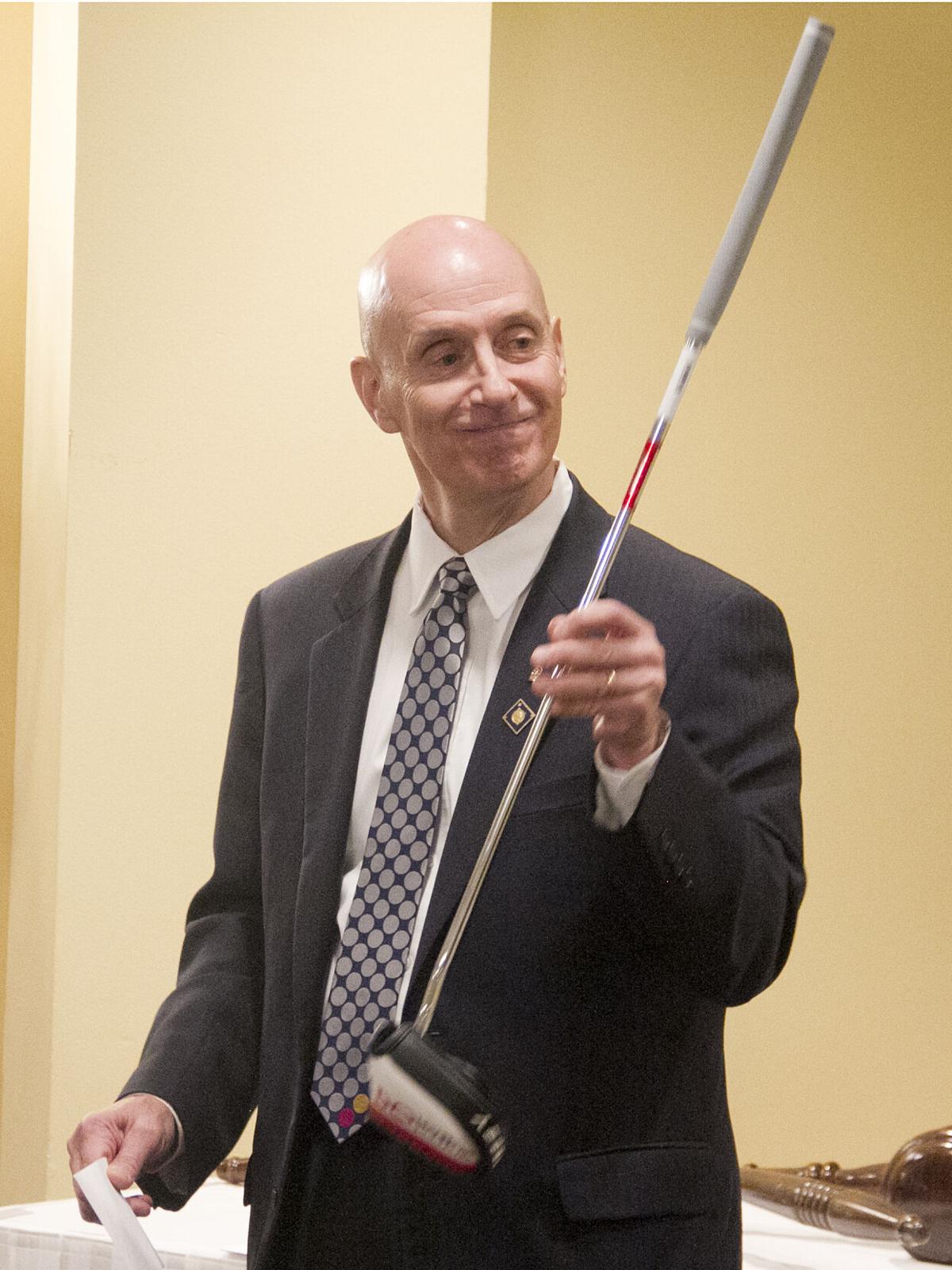 Al DeLucia takes a good look at the gift he receives in completing 2020-21 as Rotary International District 7305 governor. 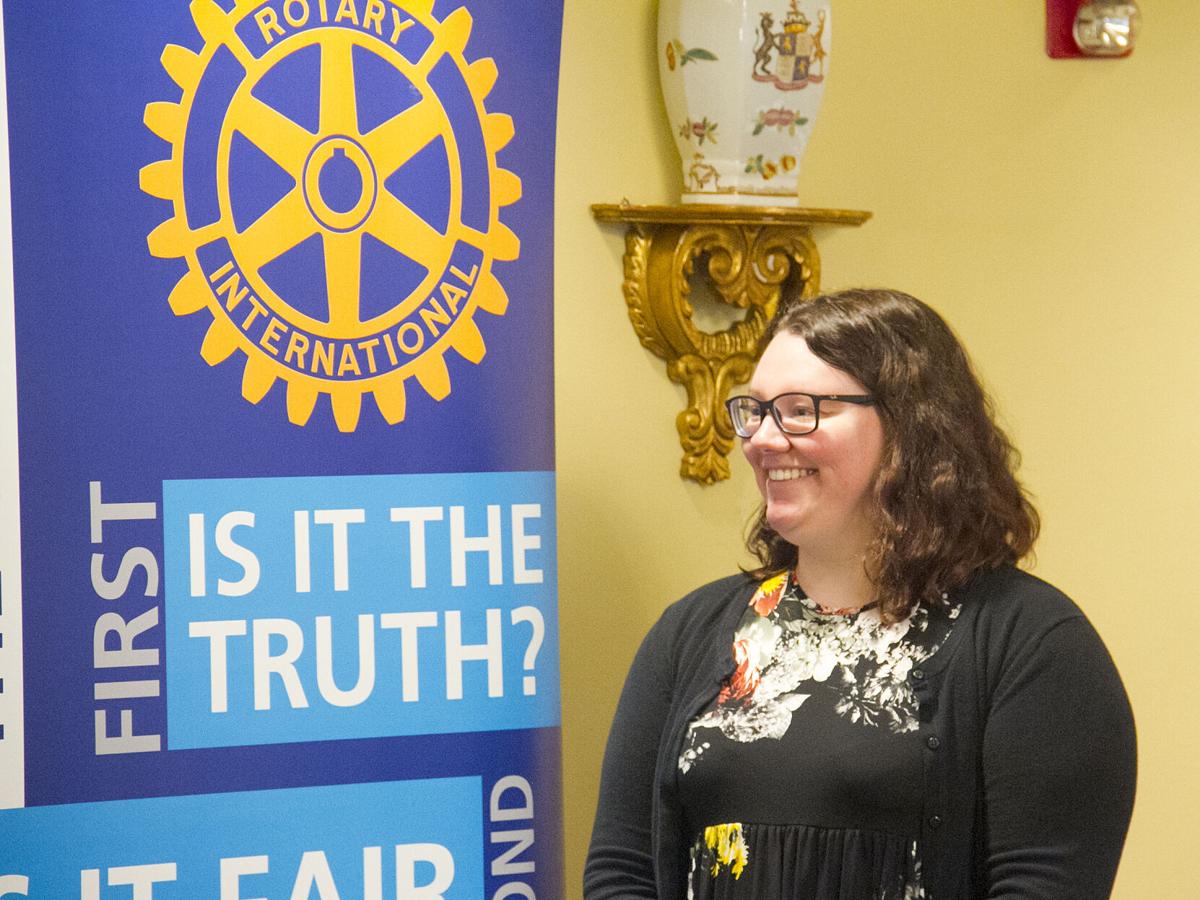 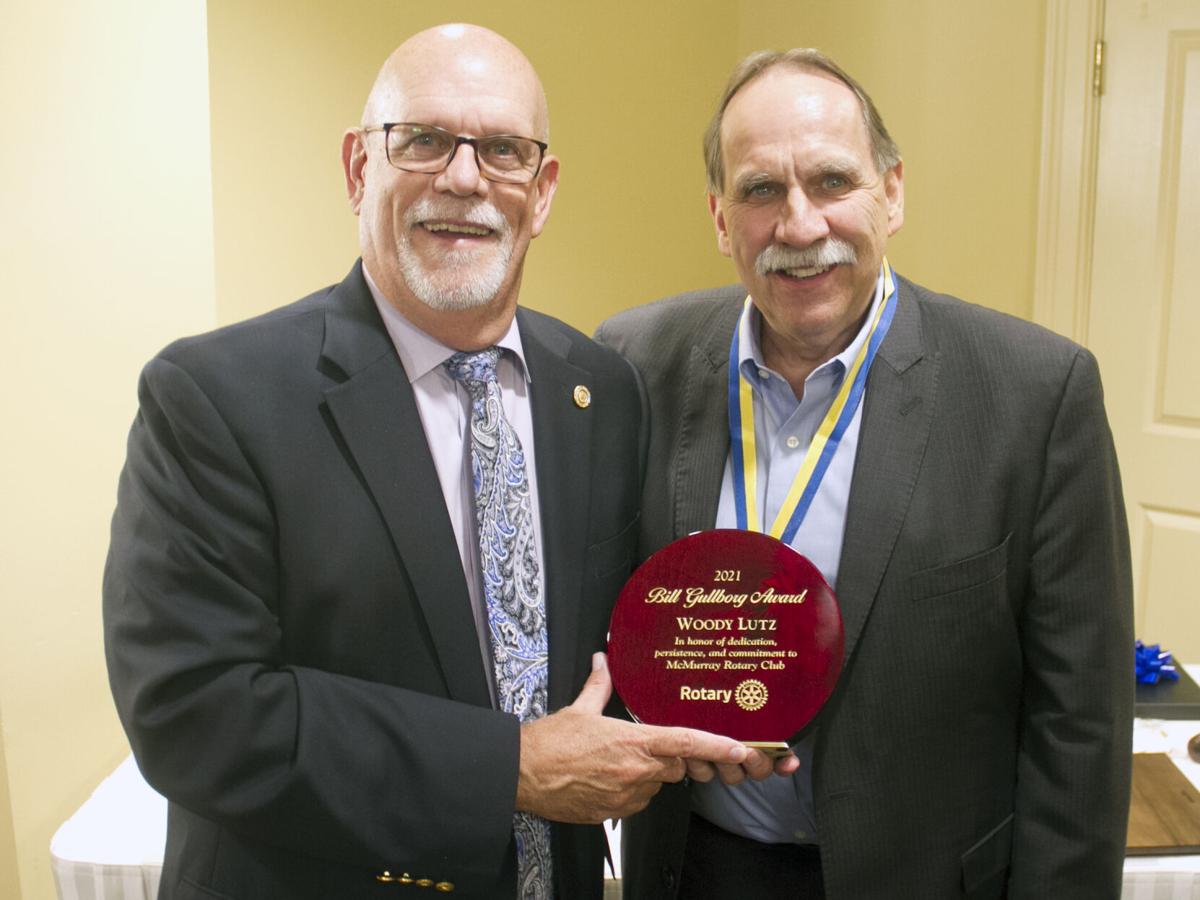 Woody Lutz, left, is congratulated by Bill Gullborg Jr. for receiving the award named after his father. 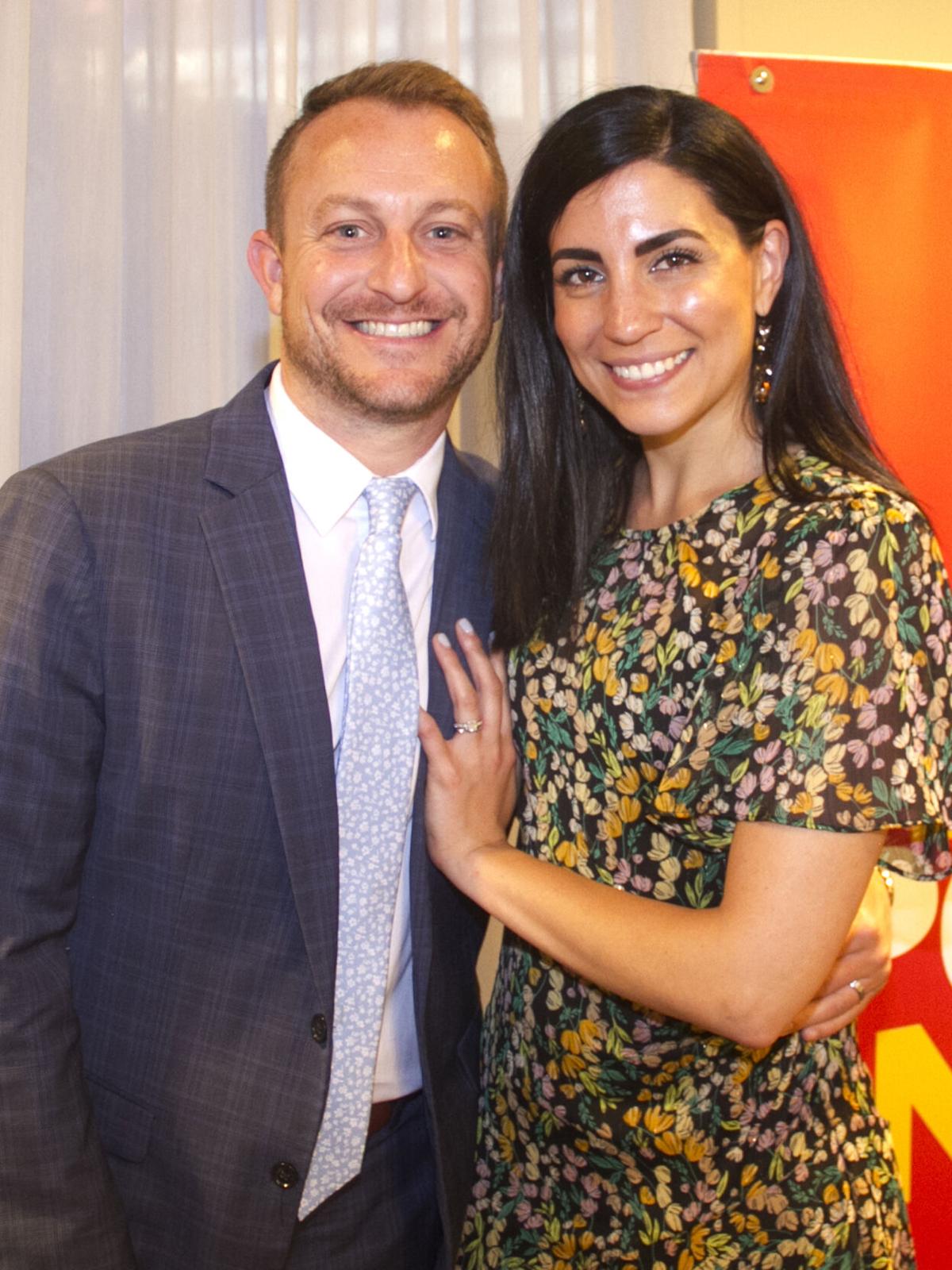 Jess Sidary Lepore, who was inducted to the club June 2, attends the President's Dinner with husband Brendan Lepore. 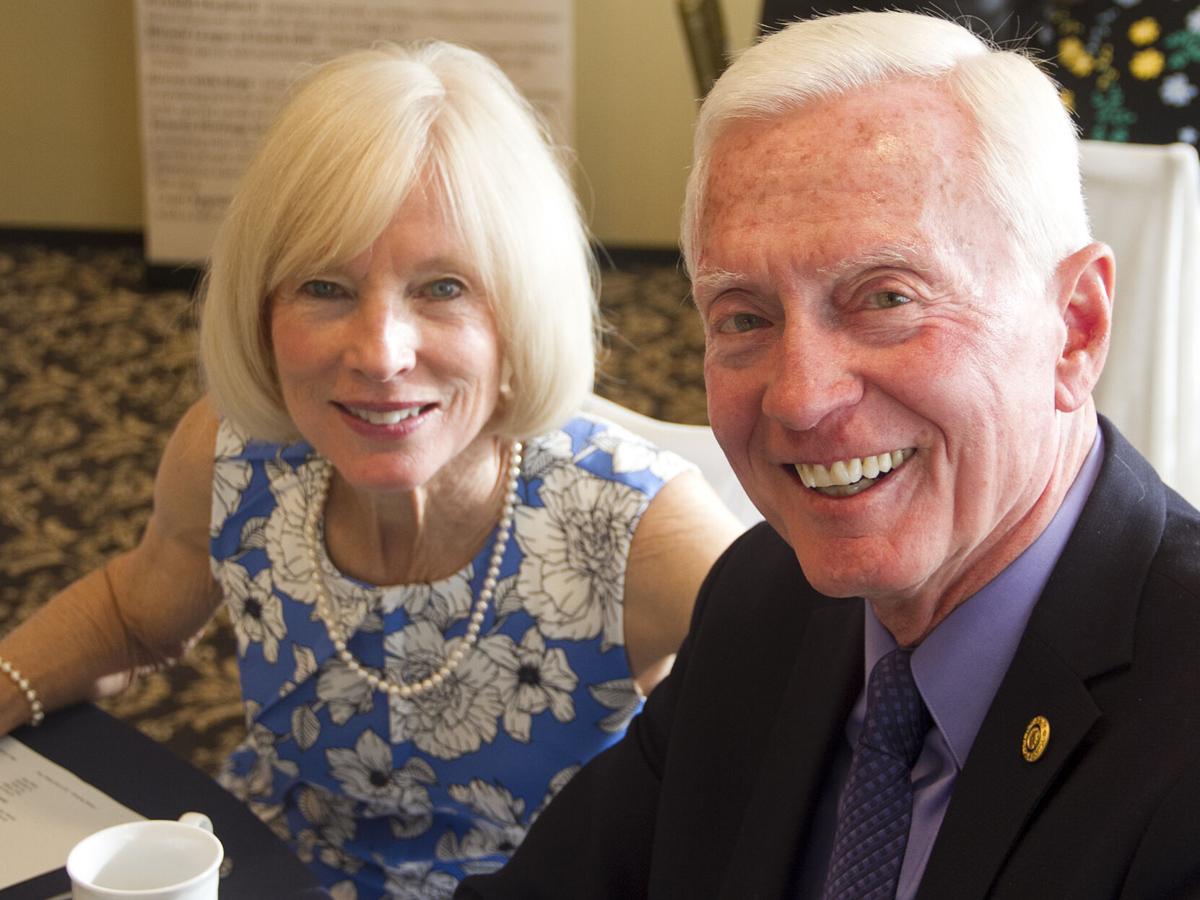 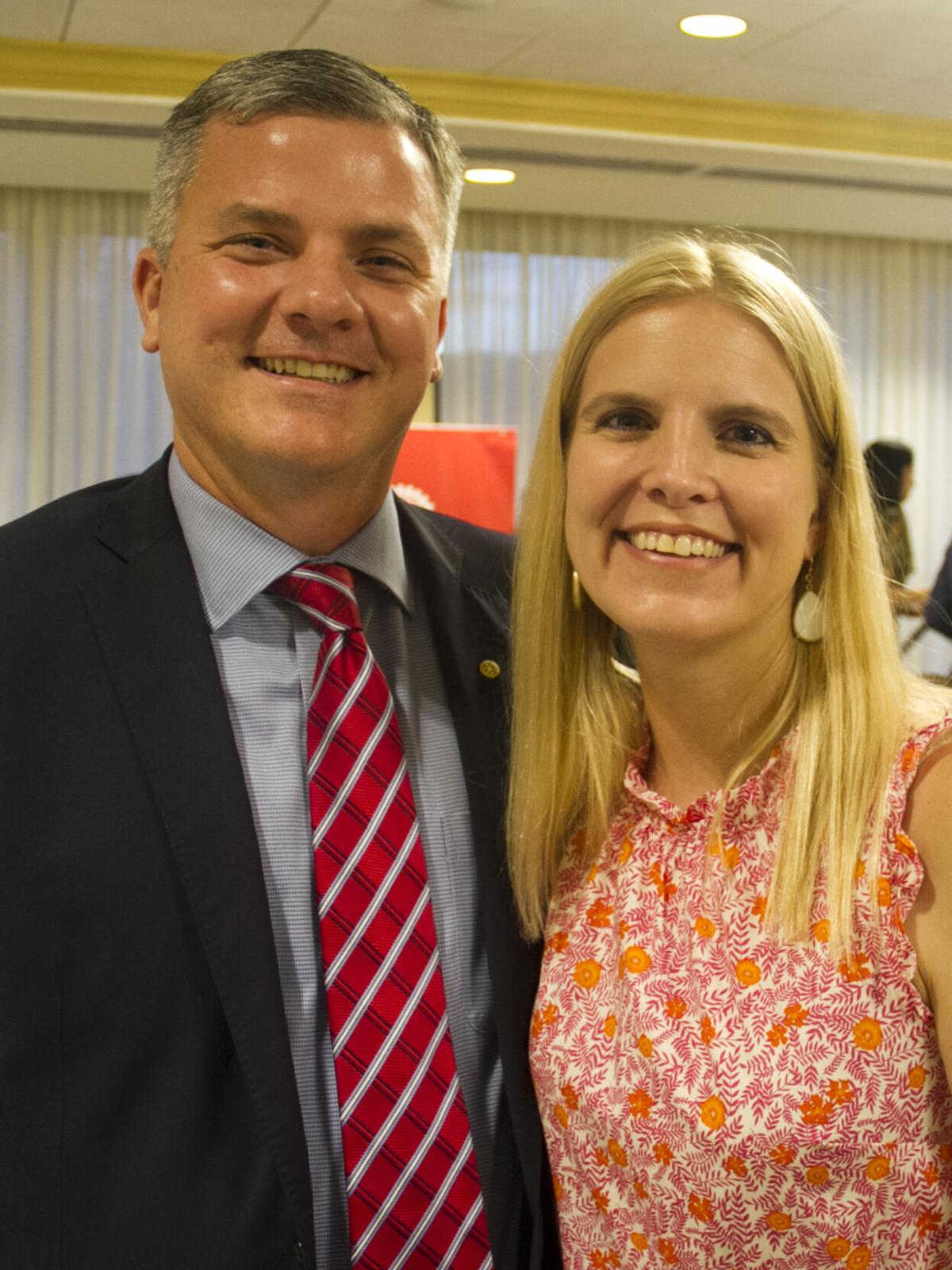 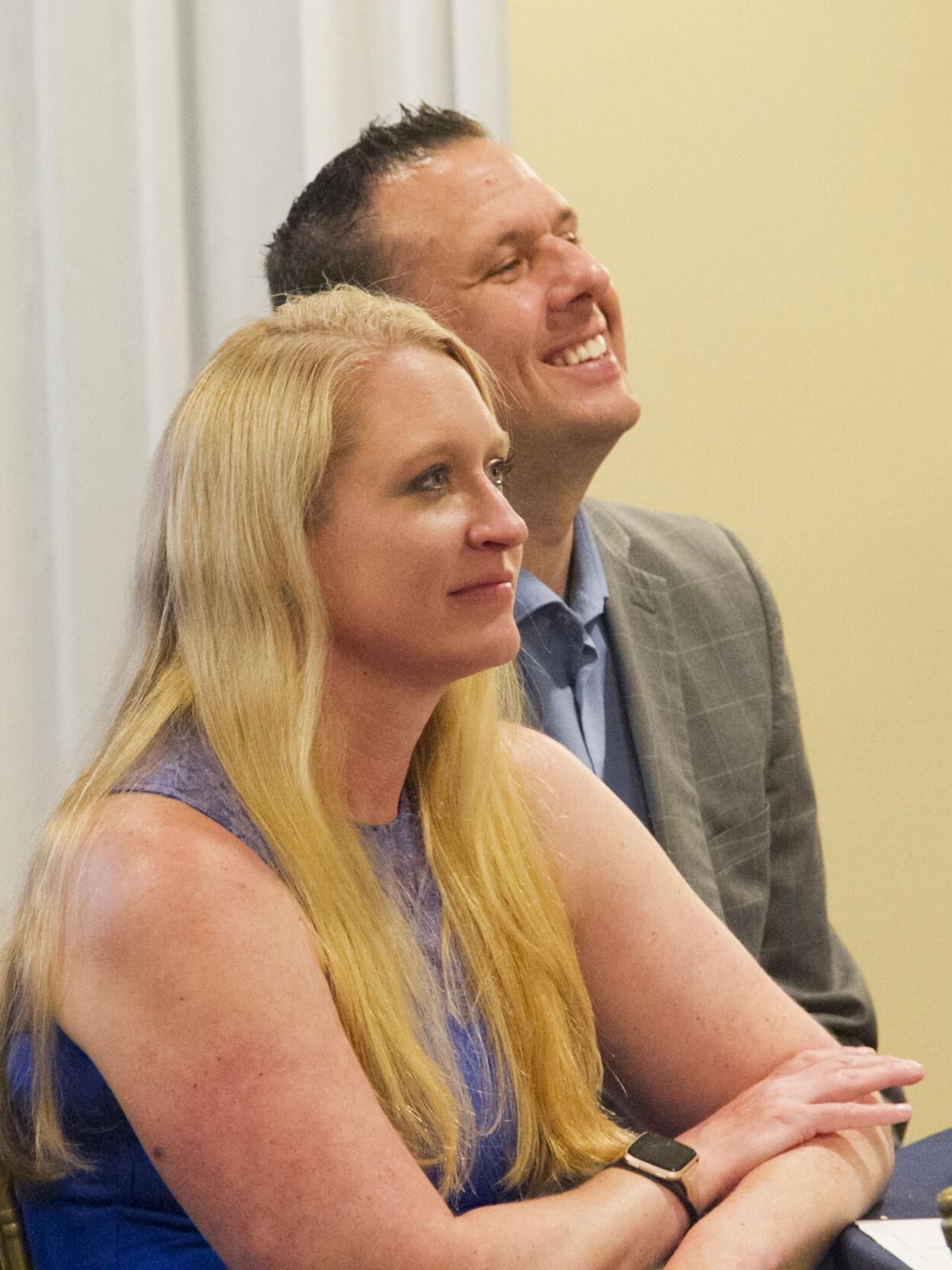 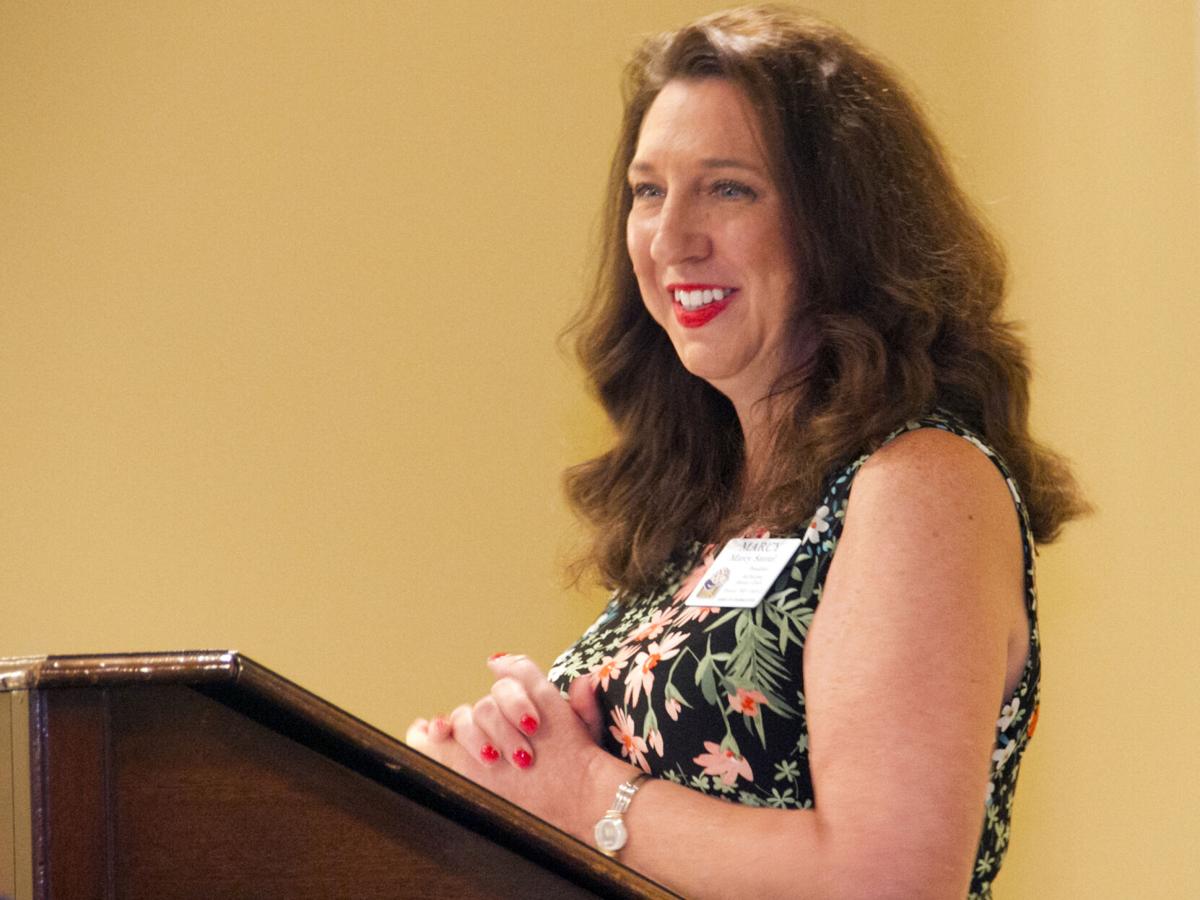 Marcy Santel is the McMurray Rotary Club’s president for 2021-22, after serving for two years as treasurer. 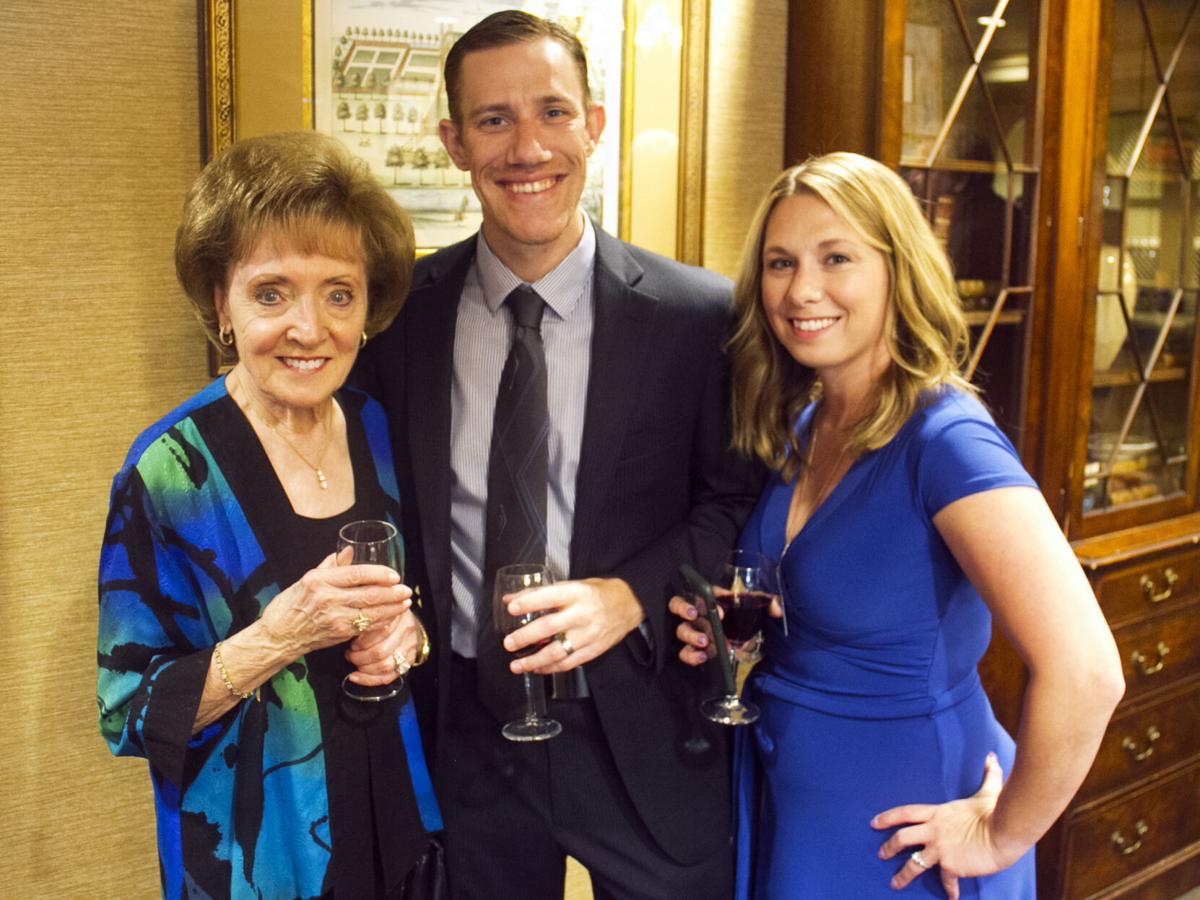 Kate Cole with husband Chris and grandmother Josie Groff, whose late husband, Paul, was a Rotarian

Jess Sidary Lepore, who was inducted to the club June 2, attends the President's Dinner with husband Brendan Lepore.

Marcy Santel is the McMurray Rotary Club’s president for 2021-22, after serving for two years as treasurer.

Kate Cole with husband Chris and grandmother Josie Groff, whose late husband, Paul, was a Rotarian

Anyone who planned just about anything for the spring of 2020 was bound to be disappointed, and COVID-19 made all the work Kate Cole put into organizing a major fundraiser go for naught.

Rather than dwell on the cancellation of the McMurray Rotary Club’s annual gala, she focused on making pandemic-related adjustments when she took over as club president last July 1.

“Change is hard. Adapting is uncomfortable,” the Peters Township resident said. “But Rotarians at their core are agents of change. We focused on what we could do, not what we no longer could do, and we found opportunities to work within our constraints.”

During the club’s recent President’s Dinner, during which she passed the gavel of leadership for 2021-22 to longtime member Marcy Santel, Cole spoke about the successes of the past 12 months despite the unprecedented adversity.

For example, despite not being able to host its main fundraising event, the club was able to generate $11,000 through various activities for the purpose of making financial contributions to worthy nonprofits.

“We also collected and donated over $7,500 in goods for various projects,” Cole said, plus the club supported Rotary International programs aimed at polio eradication and expanding access to clean water in Haiti. “This summary of our year can serve as a reminder of what a group of like-minded people can do, even at a distance during tough times.”

In appreciation of Cole’s efforts, Santel gave her a bracelet with a pearl, representing her grit.

“She talked about all the things that the club did, but we would not be able to do this without her leadership,” Santel said. “She’s one of those people that, it’s not what happens to you. It’s how you respond.”

As it turned out, Cole had a busy night. She also was presented with the club’s Service Above Self Award, named for Rotary International’s official motto since 1915, and her fellow McMurray members named her Rotarian of the Year.

The club as a whole received a Crystal Citation Award for meeting criteria regarding increased impact, enhanced participant engagement, strengthened youth services and outreach, and expanded reach and increased ability to adapt. McMurray is one of 13 clubs out of the 85 in Rotary International’s District 7305 to earn the distinction for 2020-21.

Presenting the award was McMurray Rotarian Al DeLucia, who was in the process of wrapping up his yearlong term as District 7305 governor.

In turn, David Wylie – his late father, Russ, was one of the McMurray club’s founding members in 1965 – presented DeLucia with a golf putter to use when he has more free time.

The club lost its longest-serving member when Bill Gullborg, who joined in 1968, died in November.

The first award in his name, for a member displaying the positives of commitment and consistency, was given to Woody Lutz, a former club president whom Cole thanked for supporting her throughout the year.

In attendance at the President’s Dinner was Bill Gullborg Jr., who was designated by the club as a Paul Harris Fellow, named for the Rotary International founder. Sydney Romanko, who is taking over from Santel as club treasurer, also received the honor.

The event also featured the induction of a new member, Jim Malloy, by membership chairman Greg Incardona, and Brian Schill, Peters Township Chamber of Commerce executive director and member of the Rotary Club of Upper St. Clair-Bethel Park (Breakfast), was given a certificate of appreciation for his continuing support of the McMurray Rotarians.

As for the coming year, Santel has the goal of increasing club membership to 40 from its current 36, and she looks forward to bringing back the fundraising gala that was held in neither 2020 nor ’21.

“I think we all learned a new appreciation for our lives, and we realize how much we enjoy the simple act such as getting together for this dinner,” the Bethel Park resident said, referencing the camaraderie among club members. “They’re friends. They show up week after week to do the work that we do, but they do it because they also like each other and want to be together.”