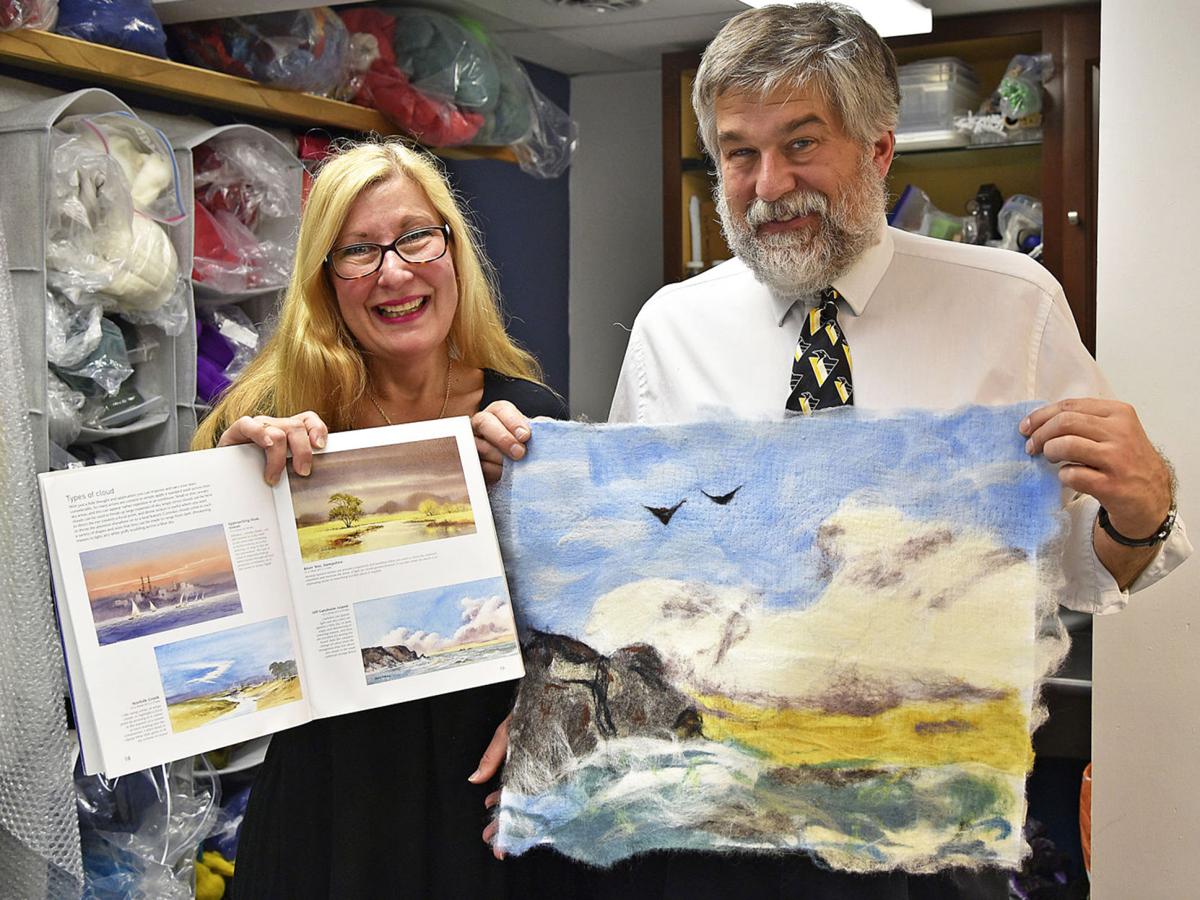 Judé Ernest taught Harry Funk how to make a felt creation based on a picturesque seaside scene. 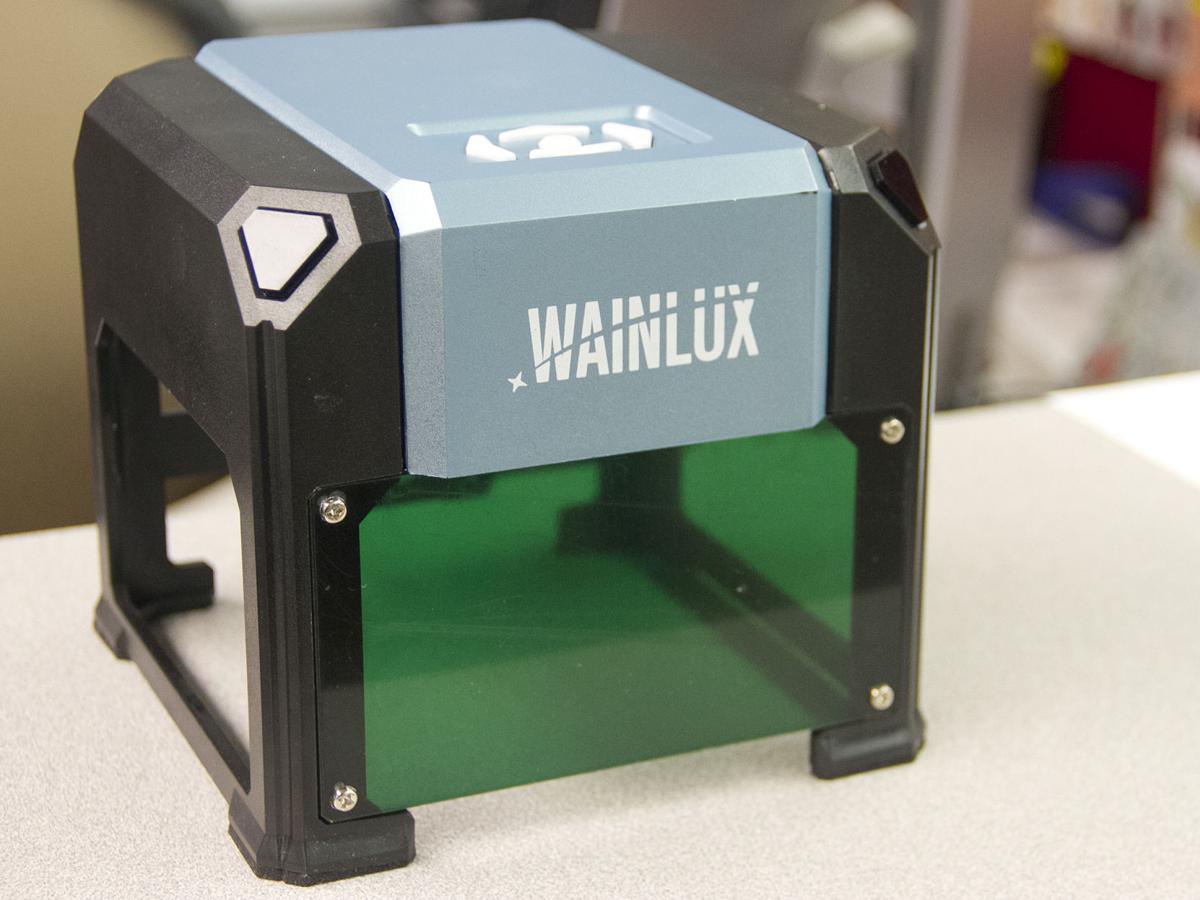 Among the available high-tech tools for creativity will be a laser engraving machine. 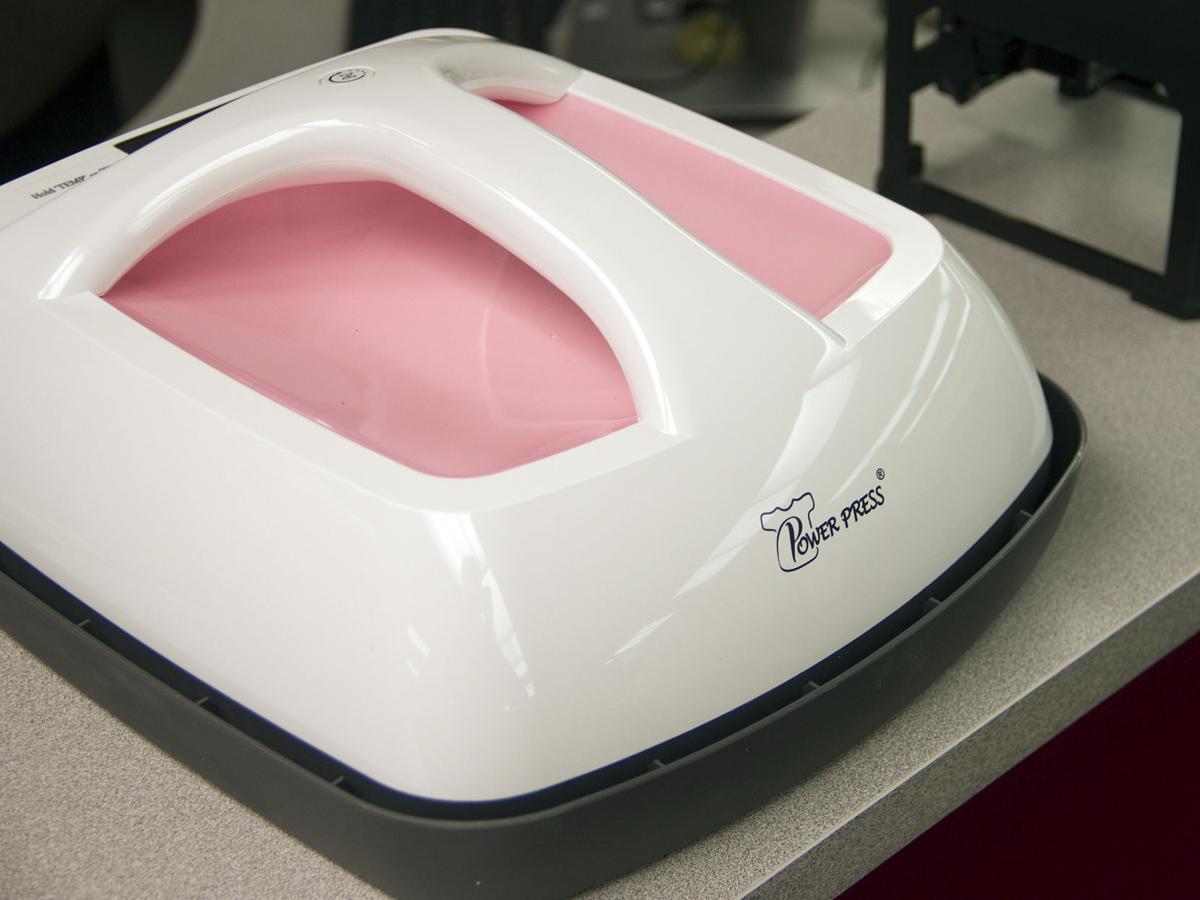 A heat press allows for customization of T-shirts and other articles of clothing.

People tell her not to say so, but Judé Ernest will admit it: “I’m an enabler.”

But, of course, she means that in a positive context.

“Enabling is providing someone with a vehicle,” the Mt. Lebanon artist said. “That’s what I want to do, then have them see that they’re able to do it themselves.”

As such, she conducts classes in workshops in a variety of media, with felt creations as her specialty.

Ernest’s latest venture is at Upper St. Clair Public Library, where she is serving as artist-in-residence and has a new program, “Making” Friends, starting Jan. 13. From 2 to 4 p.m. Mondays, patrons are invited to express their own creativity in a thoroughly welcoming environment.

“Basically, I’m going to be the facilitator, the person on the spot, always there to inspire and support and connect,” she said. “I’m very flattered and also inspired. This has been kind of a want of mine for a long time, just getting people to be together.”

“I think of it like a quilting bee, where you’re all together,” Ernest explained. “You’re working on something. Everybody’s talking.”

She and Walker Evans, programs and outreach services librarian, have been preparing for “Making” Friends after getting to know each other through the library’s monthly Creative Café program.

Featured on Jan. 27 will be New Century Careers and the United Brotherhood of Carpenters & Joiners.

New Century Careers was established as a nonprofit organization in 1999. Since then, it has strived to grow the skills of Southwestern Pennsylvania’s manufacturing workforce.

The United Brotherhood of Carpenters & Joiners of America, which began in 1881, has established itself as one of the nation’s largest, strongest and most respected unions. In 1998, the first local Sisters in the Brotherhood was formed.

On March 9, the director of admissions for Community College of Allegheny County’s South Campus will be on hand to answer questions about all of the programs offered.

The program continues April 20 with representatives from the Douglas Education Center in Monessen. New Horizons and Penn Commercial will be featured when the program wraps up for the academic year on May 18.

All informational sessions begin at 6:30 p.m. To register, visit twpusc.libcal.com/calendar/tween_and_teen.

“This is an expansion of a number of efforts that the library was already doing in order to connect library users with opportunities to create,” Evans said, including Ernest’s felting classes, instruction in painting and drawing by artist James Sulkowski, and Gulay Baltali teaching Ebru, the Turkish art of paper marbling. “We actually brought her back several times more than we expected to because it was such a high-demand class.”

Then there’s the new Silhouette Cameo 4 vinyl cutter, “which will allow people to create T-shirts and tote bags with iron-on design,” Evans explained. “That’s also going to be very useful for things like cardmaking and scrapbooking. It can cut all kinds of card stock into custom intricate designs.”

For those who lean toward more traditional activities, materials for the likes of beading and origami will be available. Ernest also is seeking the donation of a sewing machine.

“As this program continues and as we see it be embraced, I imagine that who we’re supporting will influence what also we’ll have on site,” she said. “What we want to do is be very organic and very supportive.”

The target audience is pretty much any adult with an interest in creating.

“We really would like to target as broad a cross-section of the community as we can. We want all kinds of people with different interests and different backgrounds, bouncing ideas off one another,” Evans said. "Often, artists end up kind of cooped up, and this is giving them an opportunity to get out and connect with other folks.”

To Ernest, that concept is all-encompassing.

“One of the challenges is to not just have this be women. I am so interested in seeing the dynamics of representation of everyone. This is not just everybody who knows everybody.”

The set hours on Monday afternoons represent more or less of a launching point, according to Evans.

“These are the hours that Judé will be on hand,” he said. “But depending on the type of response we see, we’re very interested in expanding open hours to give folks more times of day, to be flexible with their schedules when they want to drop by and use equipment.”

For now, those who are interested in “Making” Friends are welcome to register in advance.

“That’s helpful for us, to have a rough idea of how many folks to expect,” Evans explained.

“But we won’t be turning anybody away. We want to be as welcoming as we can.”