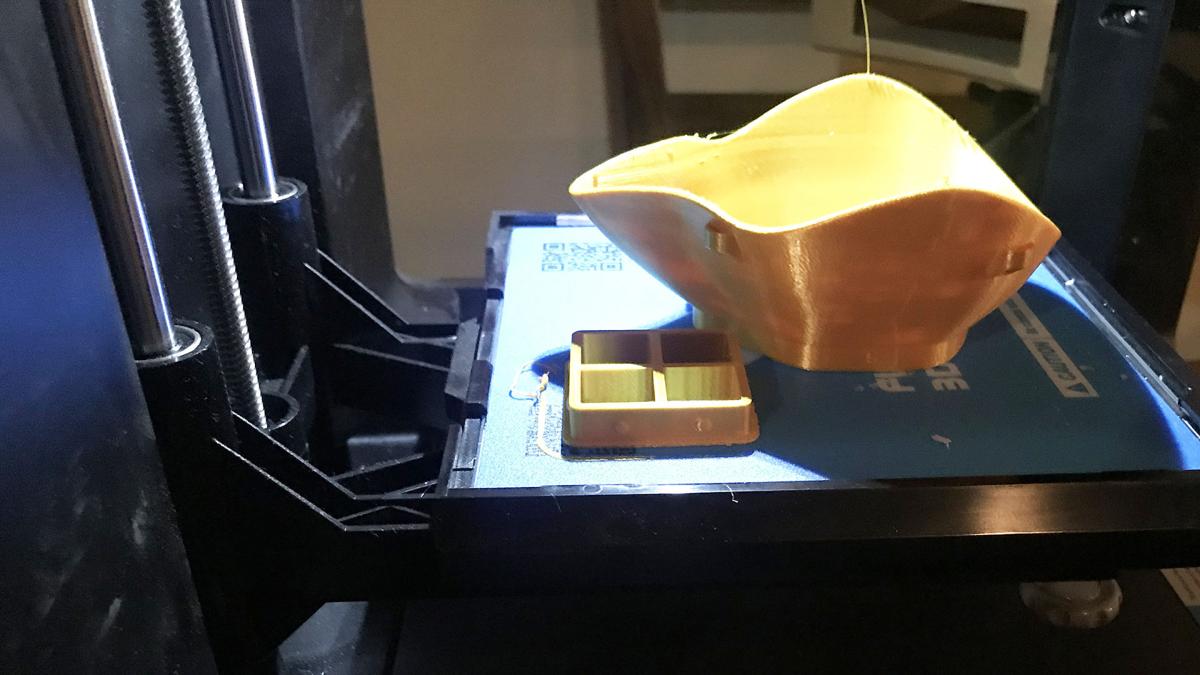 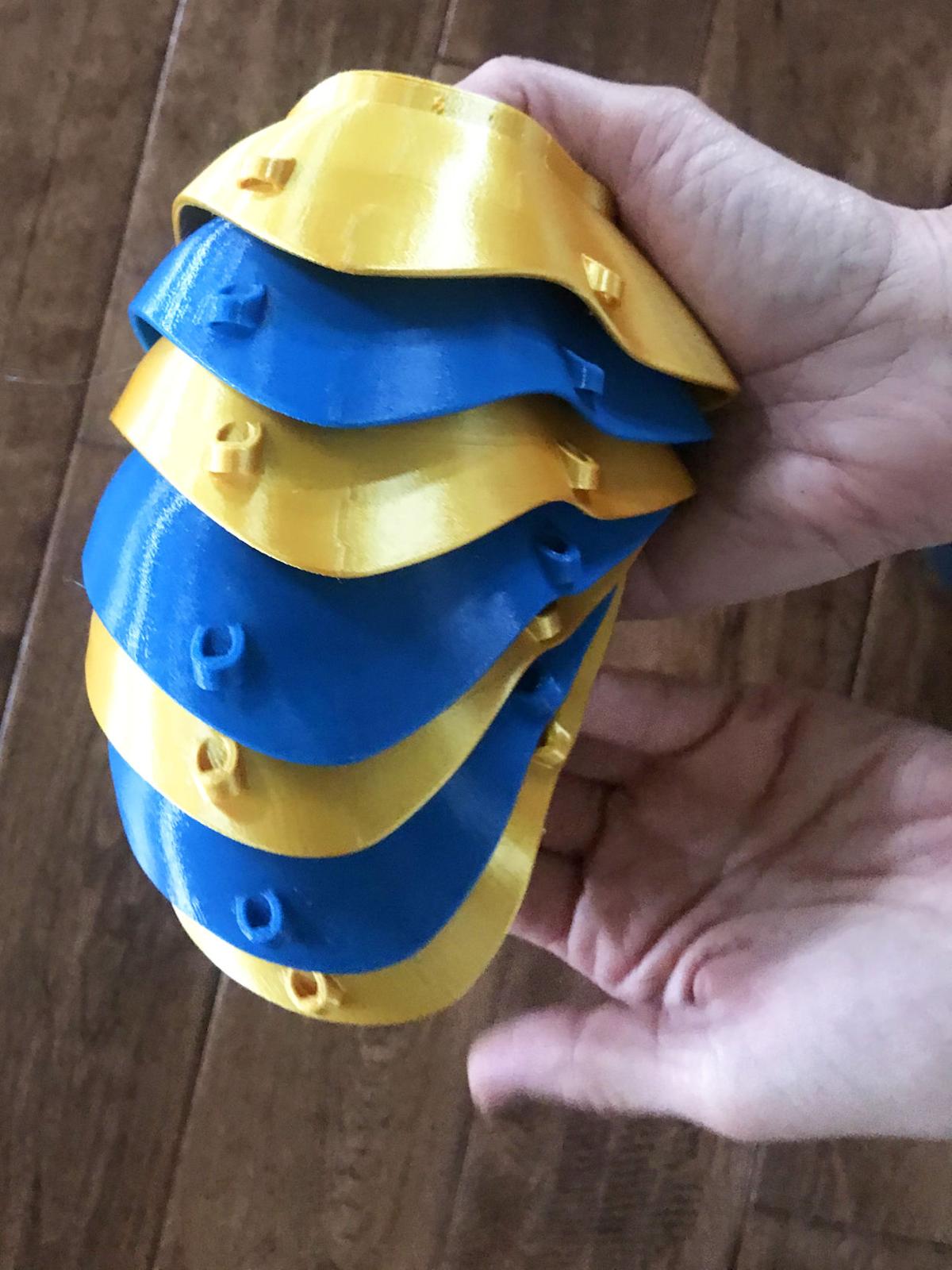 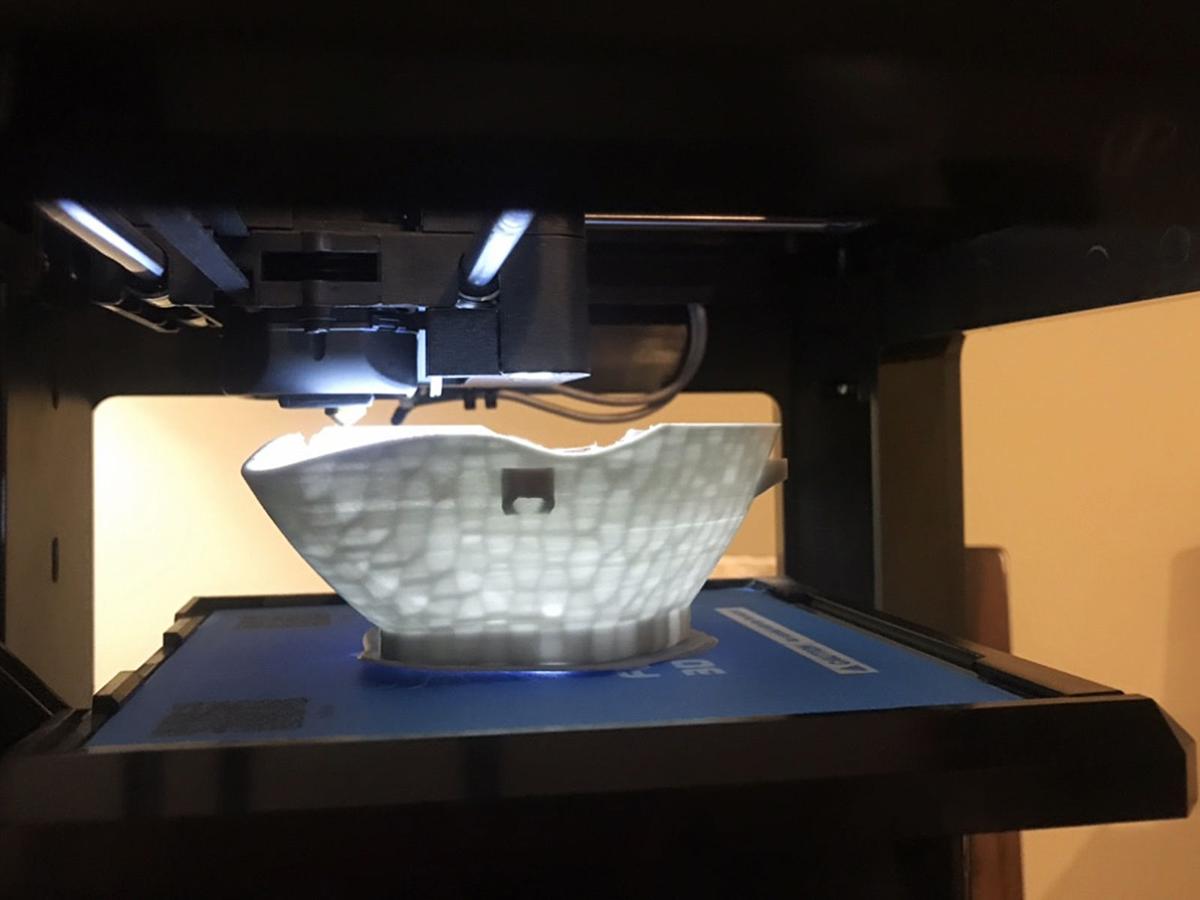 As Henry Ford used to say about his Model T, “You can have any color you want, as long as it’s black.”

That was kind of the situation for a group of Mt. Lebanon elementary school teachers when they embarked on a project to make protective masks with three-dimensional printers. The plastic, or filament, they had in stock to be used in the printing process pretty much tended to be on the dark side.

“I brought the printer home from our school and started printing them, and they were so amazed,” Hoover Elementary library media specialist Rae Ann  Macosko said about her family’s reaction to the masks. “And then they went to put them on and said, ‘I don’t know. I feel like Darth Vader.’”

And so she thought that something a bit brighter might be the way to go.

“I bought online some rainbow colors, and I bought blue and gold for Mt. Lebanon,” she said. “I thought, let’s get some nicer colors, so they’re not so Darth Vader kind of ‘Star Wars’-ish.”

Whatever the color, the protective gear that the Mt. Lebanon educators are producing represent part of a nationwide Make the Masks effort, coordinated in the Pittsburgh-Western Pennsylvania area by Tom Joseph, chief executive officer and chairman of Epiphany Solar Water Solutions in the South Side.

Various local groups are printing components of the masks, and the finishing touches are applied at Epiphany for delivery to healthcare workers and public safety personnel.

They are using the 3-D printers that are part of the Matt’s Maker Space at each building. Noelle Conover and her husband, David, provided donations to establish the hands-on learning spaces in memory of their late son, Matthew, who attended school in Mt. Lebanon.

Through their nonprofit organization, the Conovers are continuing to provide resources for Matt’s Maker Spaces in other parts of the region.

“We kind of are in a standstill, because we were in the middle of building three maker spaces at schools, but we had to stop,” Noelle said, referencing the closures because of COVID-19. “So this is great to know that they took those 3-D printers that we donated and put them to great use.”

When the teachers began to run low on raw materials, Marybeth Irvin, the school district’s assistant superintendent, elementary education, contacted Noelle about helping the cause.

“She said, ‘Absolutely.’ So she donated another $500 for everybody to buy filament,” Macosko said. “You talk about a generous person, a heart of gold. We wouldn’t have any of this without her. We wouldn’t be able to participate in this program without her. She’s the reason we have 3-D printers in our schools.”

As for the process of 3-D printing, Macasko provided a description for those who may not be all that familiar, comparing it to the workings of a hot glue gun.

“You’re feeding in the plastic. You’re getting a heating element and melting it. And then it starts to layer, back and forth, all the different layers. So that’s about a four-and-a-half-hour process to print one of them,” she said, and that actually represents a mask and small gasket produced simultaneously.

While her school was open, she had been teaching fifth-graders how to use a 3-D printer, including working with computer-aided drafting software.

“I had them designing and making pencil holder cups for all the tables in the library, to make something that has a purpose,” she said, and then she came up with new idea: “One of the teachers was saying, ‘Gosh, every time I go to prop open these doors during dismissal, I can never find the door stop.’ And I thought, there’s another practical application for the kids.

“This is the ultimate practical application,” she said about the protective equipment, “when you’re helping people on the front line, helping all those first responders.”

“You just never know, when you make a donation, where it’s going to go,” she said.

“You never know what opportunities there are going to be. We could have never dreamed that they’d be using Matt’s Maker Space printers to print masks that healthcare workers can use.”