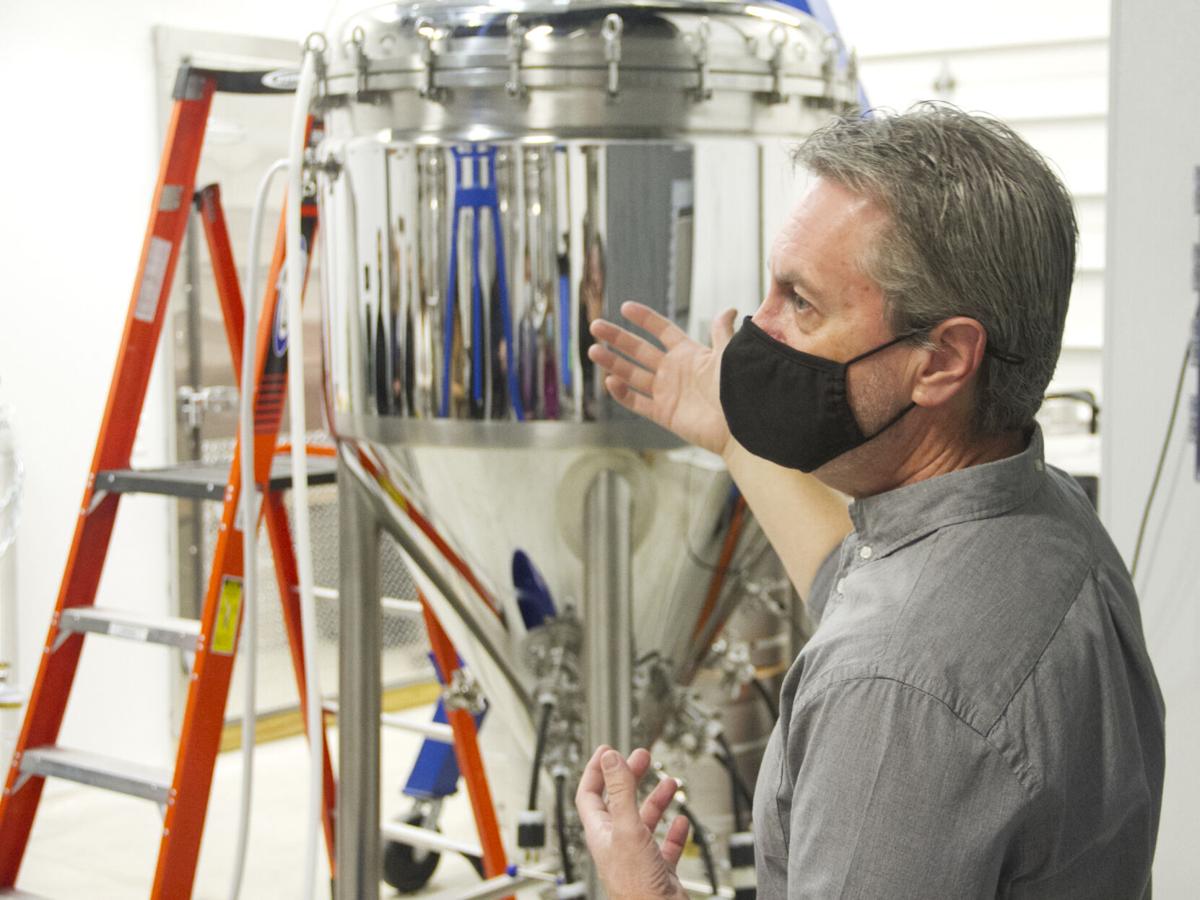 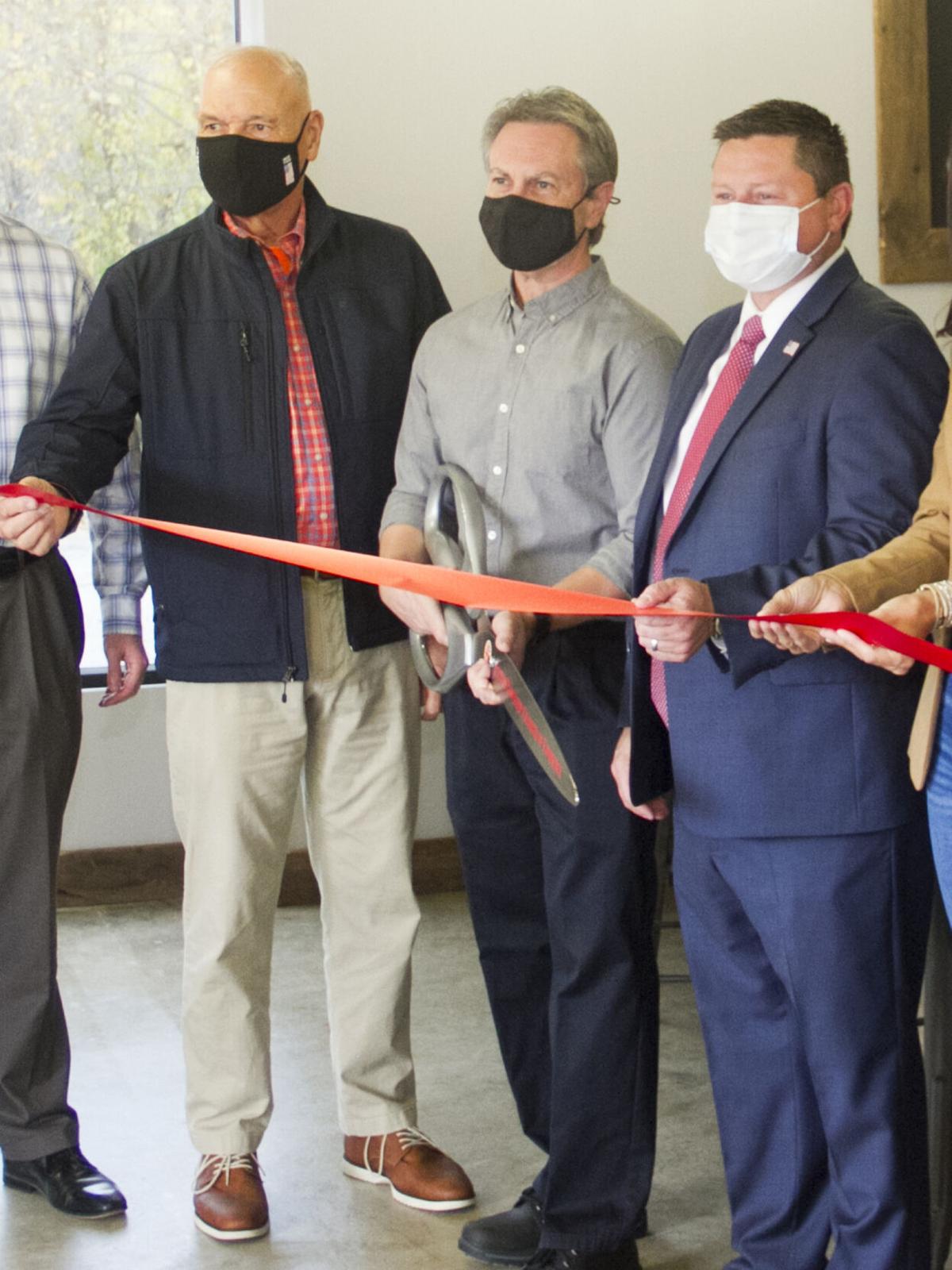 Among those joining Sam Fee, center, in cutting the ribbon are Washington County commissioners Larry Maggi, left, and Nick Sherman. 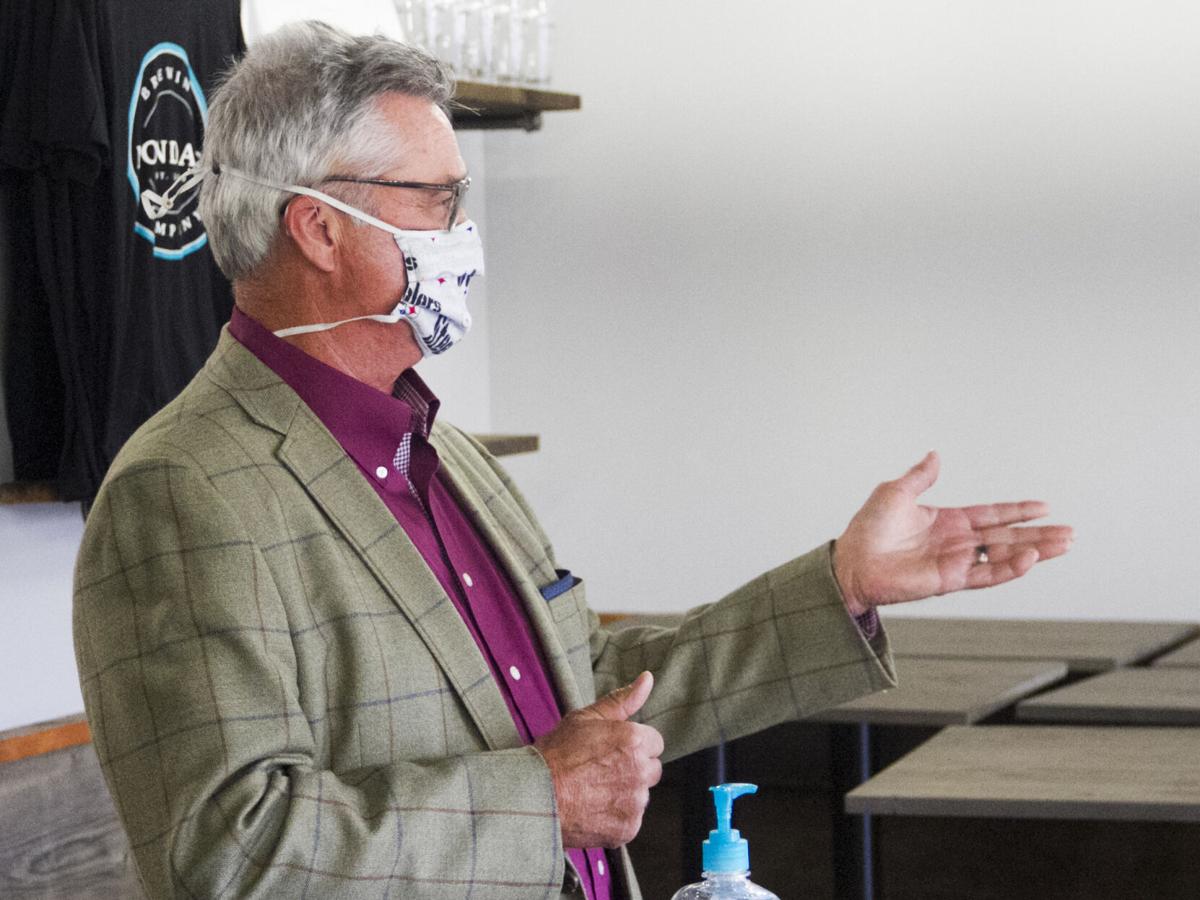 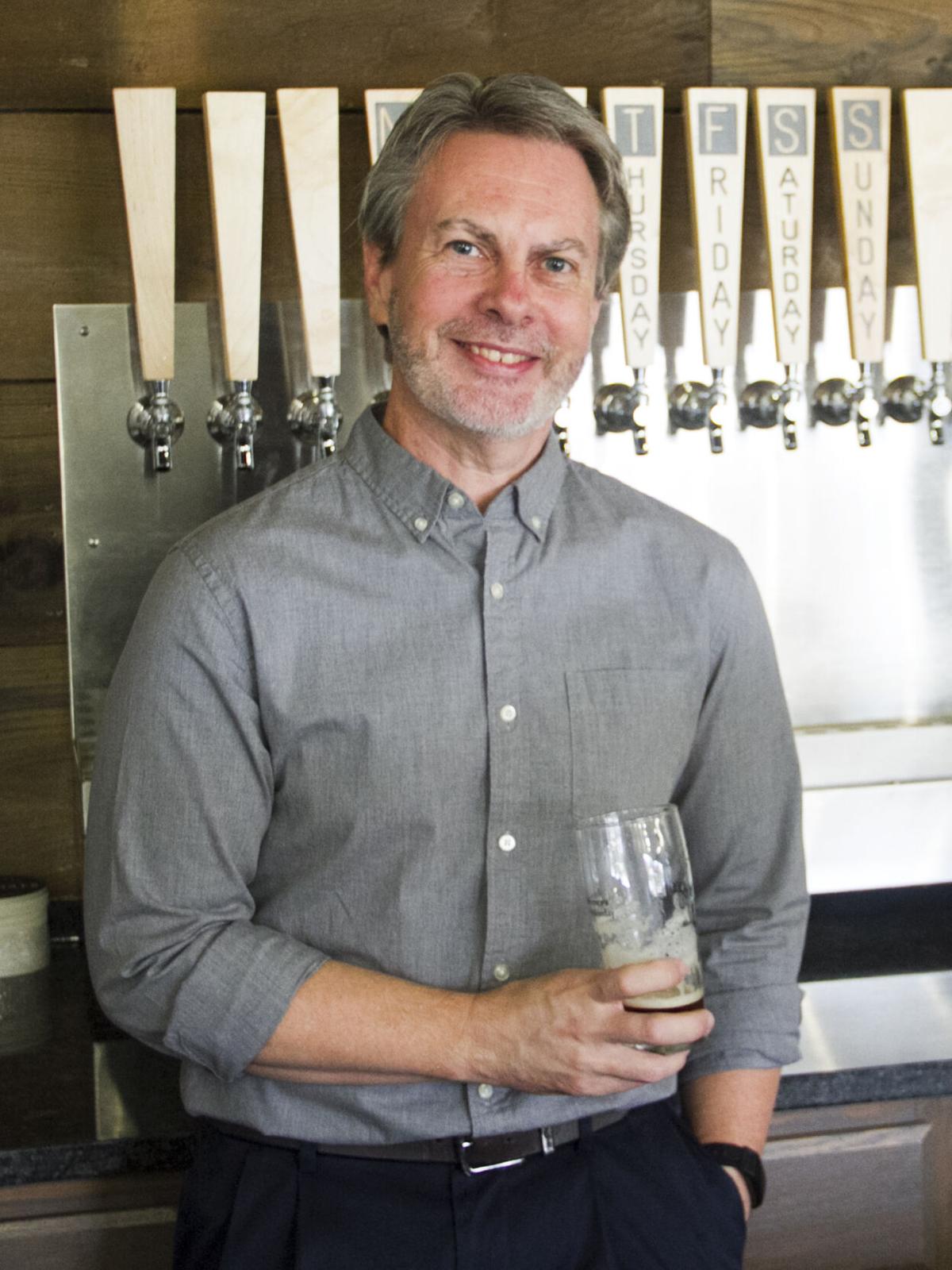 Sam Fee with a sample of one of his offerings, Rebellious Rye IPA 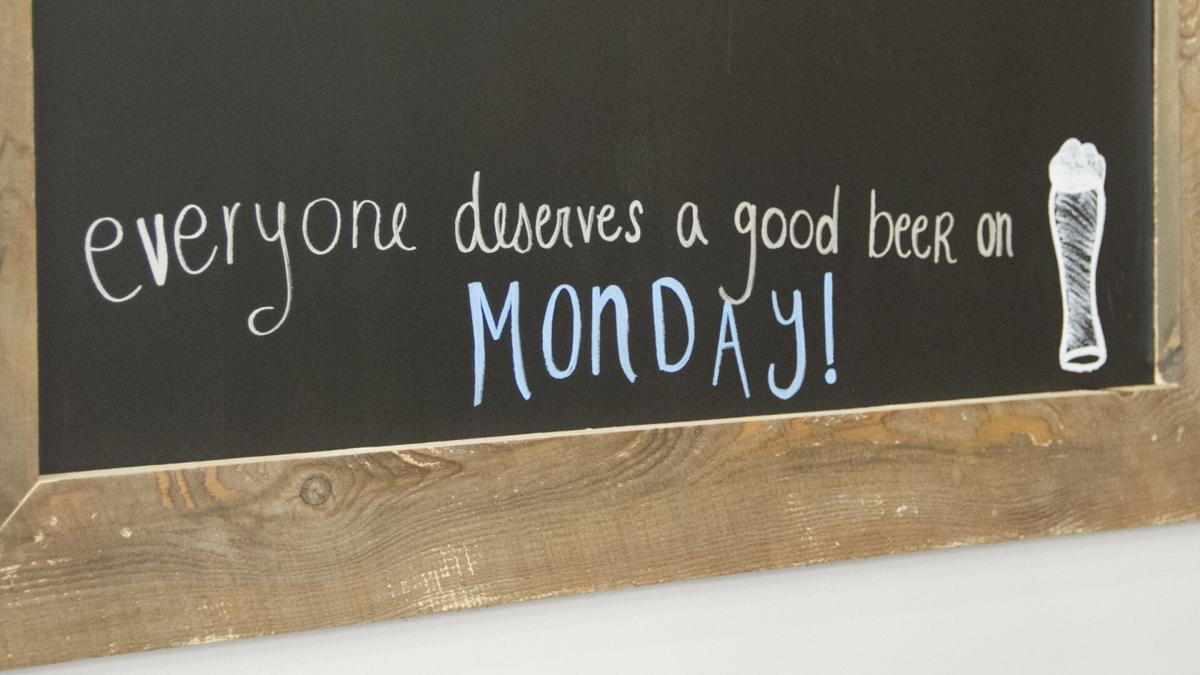 The message on the brewery's chalkboard says it all.

When it comes to being in the spotlight, Mondays Brewing owner Sam Fee prefers it to shine elsewhere.

“I’ve found that a lot of breweries tend to be about the brewer, and I’ve been working really hard to spin the story as about the community and not really about me,” he said. “This is just a place where we all come together, and the story is crafted by everybody who’s here. All I have to do is make good beer, so that people will come and drink it.”

Ale aficionados will have the opportunity to taste for themselves during the first week of November with the full opening of Fee’s new business at Peters Township’s Waterdam Plaza.

During a ribbon-cutting ceremony that took place Monday – of course – he explained the reasoning behind the name.

“Mondays can be difficult days. Everybody needs a beer on Monday, especially around 4 or 5 o’clock,” he told his guests. But most Pittsburgh-area breweries, at least before the COVID-19 pandemic, tended to be closed at the start of the traditional workweek.

And so not only does he plan to have Mondays Brewing open each Monday, but he’ll extend special offers to service industry workers who typically are off work that day.

The brewery’s location not only is close to home for Fee, a Peters Township resident, but it fills a geographical void for beer enthusiasts.

“When I was developing the business plan, which now seems like forever ago, I actually mapped out all of the breweries in PA, and Peters had this beautiful little ‘dead zone’ with no breweries in it,” he said.

Fee happened to start putting his plan into operation about the time COVID-19 started to present a major health hazard.

“Well, it’s either going to be horrible and we’ll go down in a ball of flames, or it won’t be bad and it’ll be over in a few months,” Fee said about his viewpoint at the time. “Or we will open up and have all the beer we need to get us through this apocalypse.”

With the last-named scenario in play, he is ready to confront pandemic-related situations such as limited seating capacity and customers’ preferences for curbside pickup of products.

“I think that if I’d opened, say, in April, I might not have made it,” he said. “But opening now, I’ve been able to observe the successes and less-successful things that other breweries have done all throughout the region.”

An educator by profession – he is a professor and chairman of computing and information studies at Washington & Jefferson College – Fee took up his beverage-oriented avocation kind of by necessity.

“I started in 1999 when I was in Kentucky and experienced the words ‘dry county’ for the first time in my life,” he recalled. “My alternative was to drive 45 minutes to Lexington or make my own beer.”

Helping turn his erstwhile hobby into a business is assistant brewer Mike Jones of Washington, who is an Observer-Reporter staff writer.

“There have been so many times where I’ve said, ‘That’s it. That beer’s no good. Dump it.’ And he’s kind of like, ‘Wait a minute. You’ve got to think about this, that and the other thing.’ So he’s giving me the encouragement to kind of keep going,” Fee said. “And we’ve never dumped a beer.”

For quality-control purposes, though, that always is a possibility.

“Any day that a beer doesn’t pass muster, it’s just going down the drain. And to make the sewer authority happy, it’s going down very slowly and in a controlled way, with no hop matter,” the professor said.

He also credited Ashley Mikelonis, a Washington & Jefferson alumna who serves as volunteer assistant coach for the W&J women’s basketball team, with being an integral part of the Mondays team.

“She has come in here and put this taproom together with an incredible vision,” Fee said.

And in keeping with the community aspect of the brewery, some 20 to 30 other volunteers also have helped in various capacities with getting Mondays ready to open.

Fee plans to have half a dozen of his beers on tap to start, along with serving products from Liberty Pole Spirits in Washington, Silver Mark Cellars in Canonsburg, Apis Mead and Winery in Carnegie, and even some other breweries. He also is collaborating with Washington County restaurants to make sure his customers have plenty of food to go along with their drinks.

Despite launching Mondays under less-than-ideal circumstances, Fee tends to see his beer glass, if you will, as half full.

“It is true. We are in a pandemic. It is kind of crazy to open in a pandemic. But we’re here,” he told his ribbon-cutting guests. “And if social media is any indicator, we’re going to be just fine.”