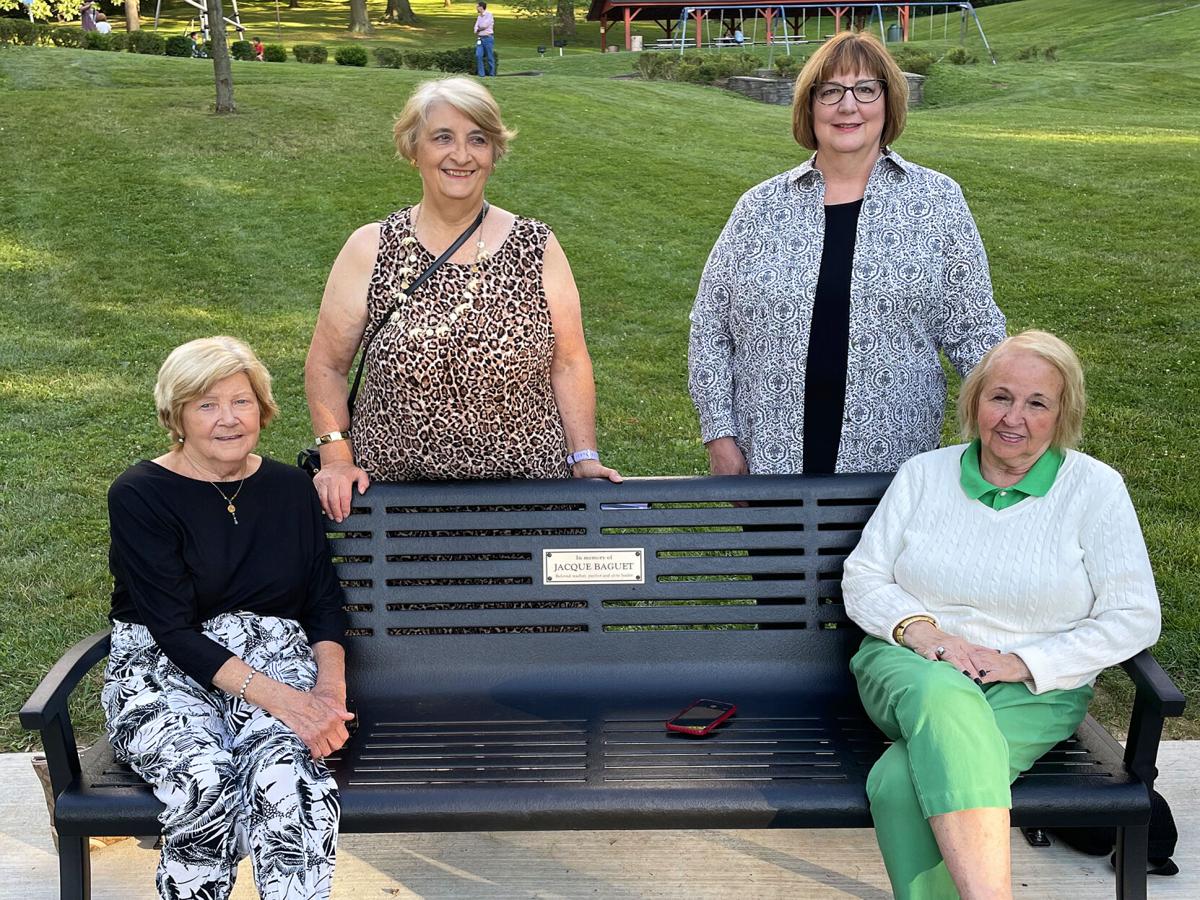 Friends of Jacque Baguet gather at the bench placed in her honor at Mt. Lebanon Park. 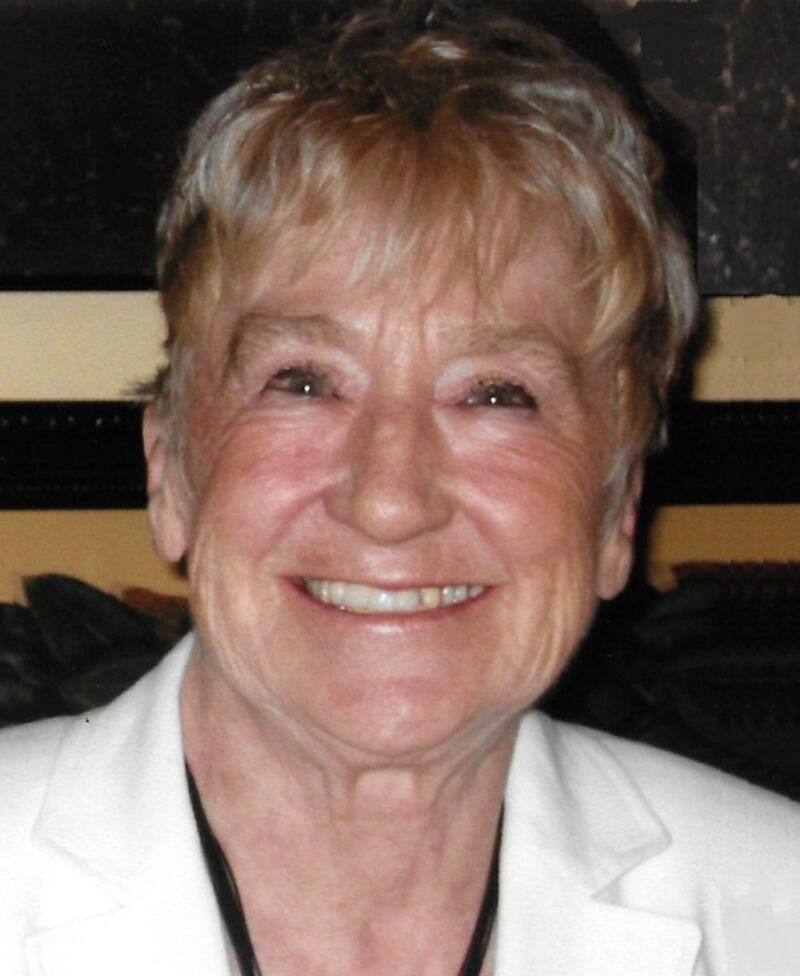 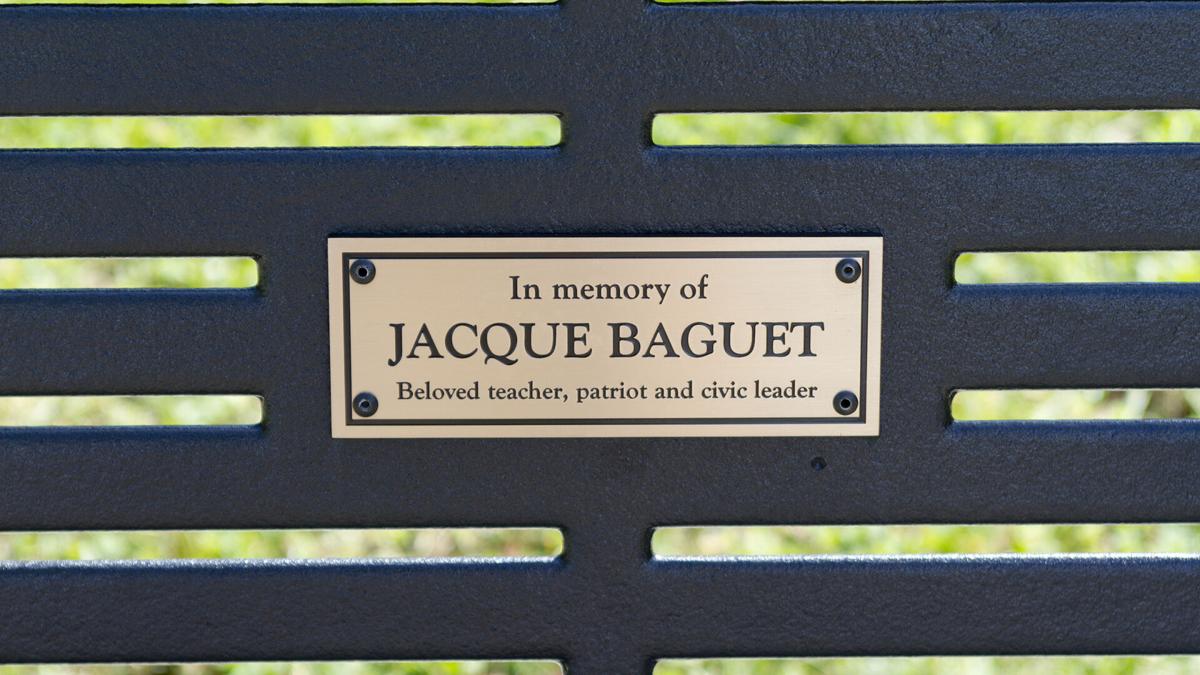 For parents or other caregivers trying to keep up with children at a playground, a nearby bench can be a welcomed sight.

One such seat in Mt. Lebanon Park bears a plaque stating its purpose: “In memory of Jacque Baguet, beloved teacher, patriot and civic leader.”

People who take advantage of the bench’s presence for a bit of a respite may read the plaque and wonder who Baguet was.

Her friends are happy to enlighten, particularly with regard to her personality.

“She treated everyone well,” Beverly Saulnier recalled. “She was very respectful and kind to everyone.”

Saulnier and other members of the Mt. Lebanon Council of Republican Women were instrumental in memorializing Jacqueline B. Baguet, who died June 23, 2016, at age 86.

“We wanted to recognize and do something to honor Jacque. So we sent out a fundraising letter and asked for donations, and people were so generous. We ended up with more money than we needed for the bench,” Saulnier said, adding the extra $600-plus was designated for a scholarship.

Although Baguet worked tirelessly for decades on behalf of one political party, the donations were bipartisan.

“She had a breakfast in the park that she invited people to,” her friend Rose Liptak said about Baguet’s annual Fourth of July event, “and half of them were Democrats. So she was one who was really a unifying person.”

Her hometown benefited as a result.

“She was a booster,” Saulnier said. “Whenever anybody was moving, she’d say, ‘Move to Mt. Lebanon.’”

Baguet taught first grade in Pittsburgh Public Schools, first at Boggs Avenue Elementary in Mt. Washington and then at Whittier Elementary in Duquesne Heights. She also served as a teacher of sorts for her many nieces and nephews.

“She was a very good aunt,” said Dee Spahr, another friend. “Jacque would always take them different places and tell them all about the history.”

The “patriot and civic leader” portion of her plaque refers to her participation in a variety of community organizations and especially her efforts on behalf of the political process.

“She was a unique woman who realized she was in a unique country,” her friend Eileen Holste said, “and she just had a passion for getting the best people into government to keep things going the way they should be.”

Over the years, Baguet became known among fellow Republicans as a go-to person.

“If ever a candidate were running in Allegheny County or the state, they knew to come to Jacque and get her advice and counsel and support,” Saulnier said.

In that respect, she was comparable to another high-profile GOP supporter from Pittsburgh.

“I’ve always called Jacque the Elsie Hillman of Mt. Lebanon,” Spahr said. “She said, ‘But Dee, I didn’t have her money.’”

Baguet did have cachet, though.

Spahr told about a cold, rainy October evening when Baguet requested a ride – she didn’t drive – to Shadyside for an event at which U.S. Sen. Pat Toomey was speaking.

“We go up and around this long driveway, and park the car. And these people run out and get Jacque,” Spahr said.

She was a bit behind, and by the time she made it into the house, everyone was listening to Toomey.

“After he finished speaking,” she recalled, “there was Jacque, in a chair, drinking wine, right beside the Senator.”

With her passing, Baguet’s friends decided they should preserve her memory.

“We kept thinking, what should we do? We kept delaying it and delaying it. And I said, ‘Hey. We’ve got to do something now,’” Spahr said.

Finally, the park bench was dedicated during this year’s Mt. Lebanon Council of Republican Women Flag Day ceremony. The seat is placed in a position where adults can keep a close eye on playing children, a fitting tribute to a woman who devoted her life to education and working toward what she believed to be of benefit for all.

“She gave her best at everything,” Holste said, “and she brought out the best in other people.”