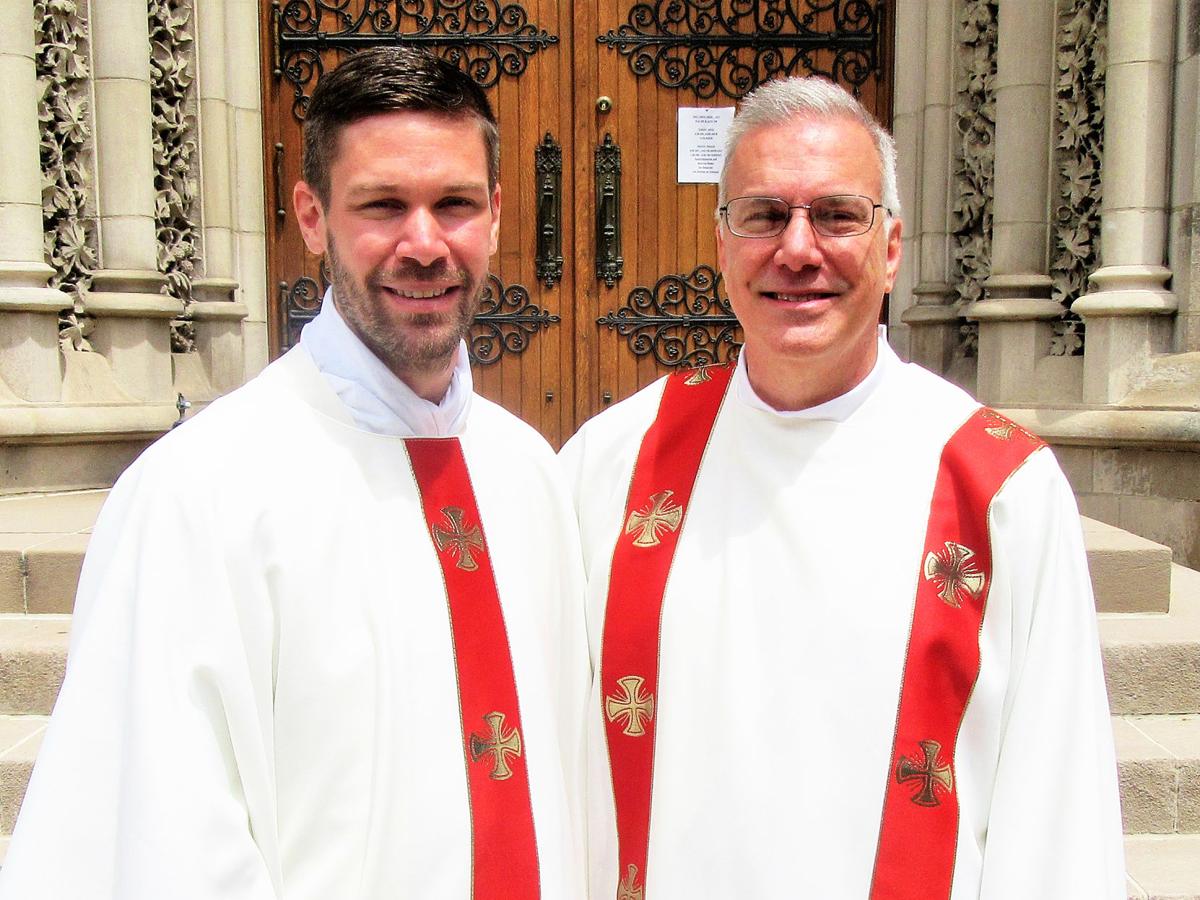 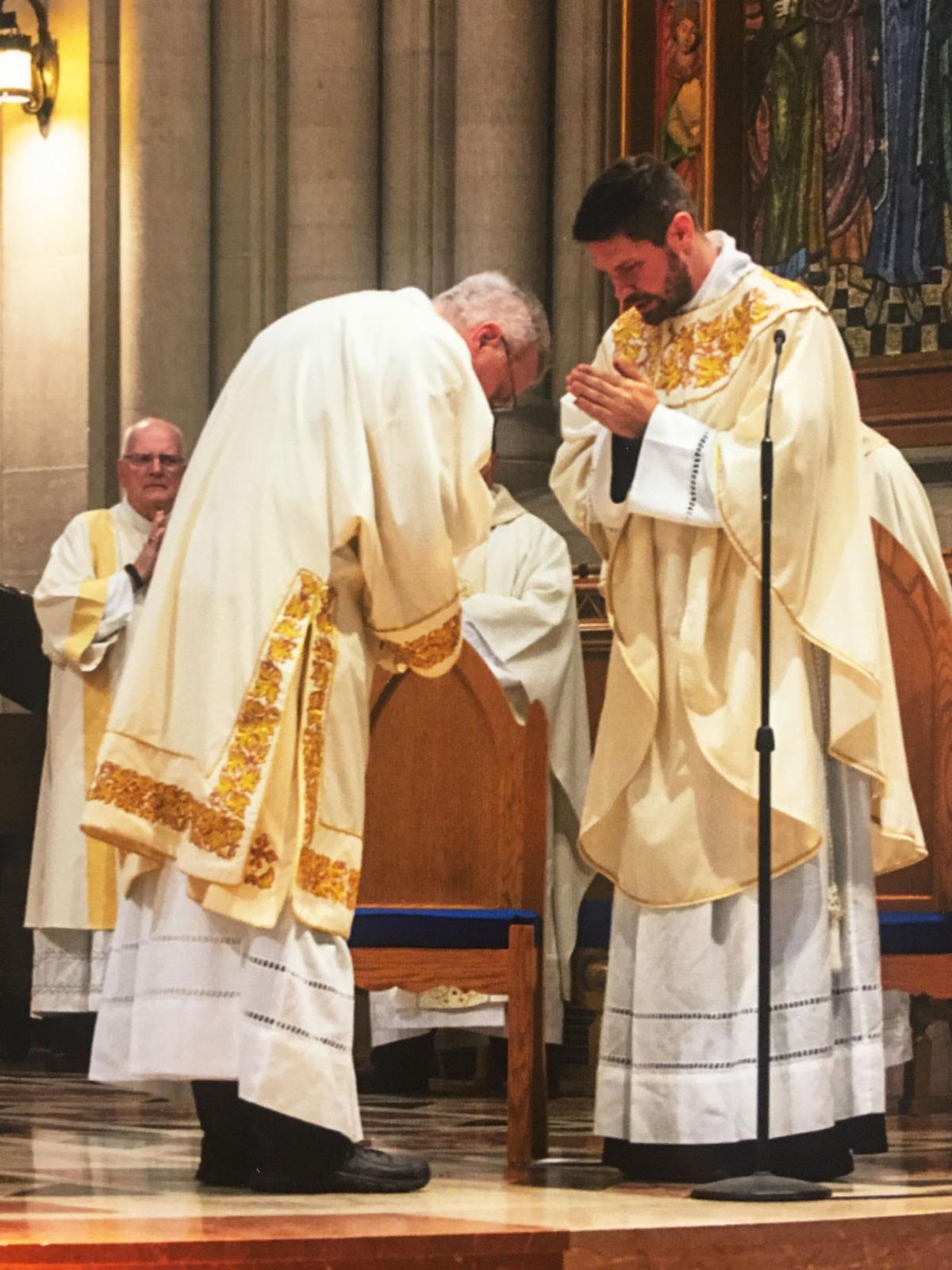 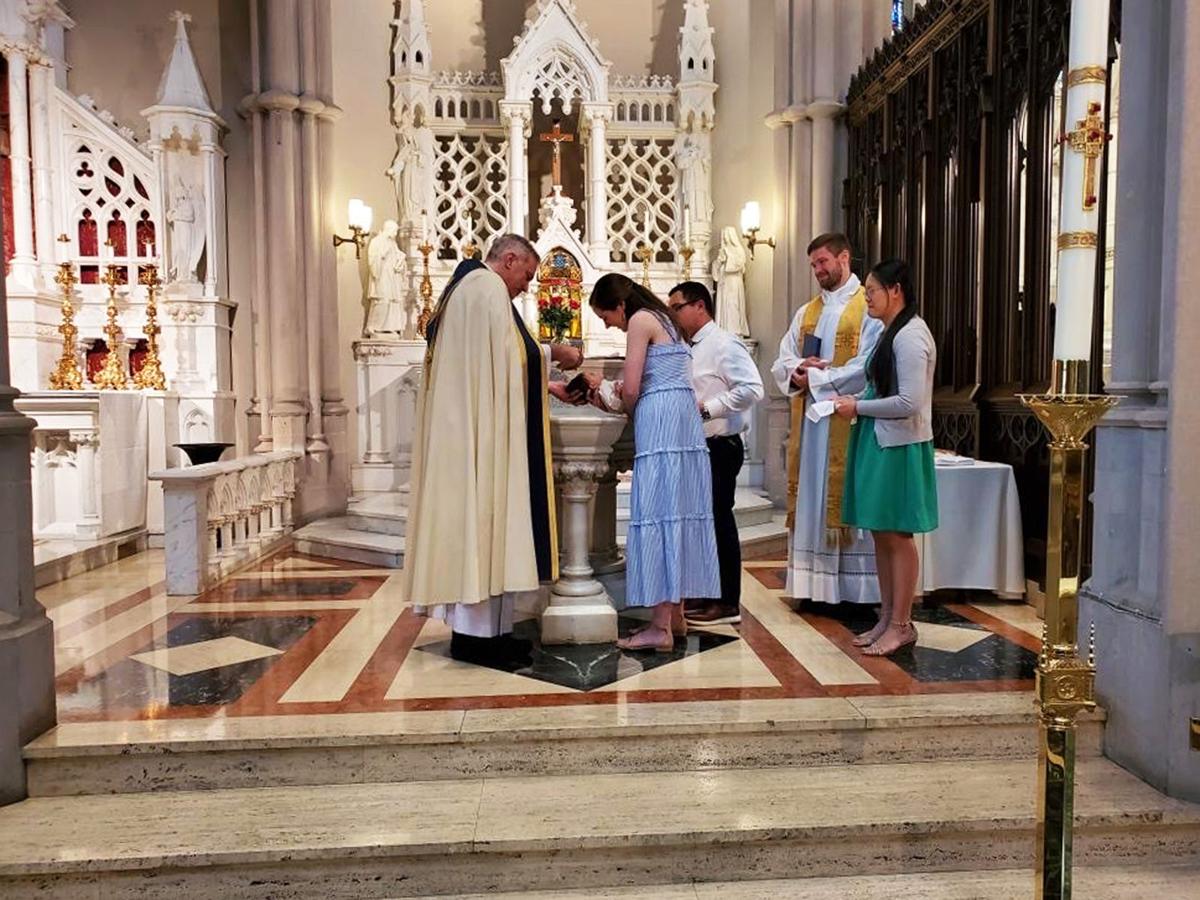 Deacon Scott Potter baptizes his granddaughter Rose with Father Adam Scott as one of the godparents on Father’s Day.

Ordinations have become something of a family tradition for the Potter family of Mt. Lebanon.

In 2015, the Rev. Adam Potter was ordained as a deacon in the Catholic Church, at none other than St. Peter’s Basilica in Vatican City. His ordination as a priest came the following year a bit closer to home, St. Paul Cathedral in Oakland.

The mother church of the Roman Catholic Diocese of Pittsburgh also served as the site when Scott Potter – Father Adam’s father, if you will – was ordained June 13 as a permanent deacon.

Now, the Potters are the only family in the diocese with a dad-son deacon and priest, representing two of the three orders of ordained Catholic ministers, along with bishops.

Scott’s journey toward the distinction diaconate started six years ago, during a men’s group meeting at St. Bernard Church in Mt. Lebanon that featured a deacon speaking about the responsibilities of his position.

“He described the types of ministries that deacons are involved in. He described the real need that we have within our diocese and the Catholic Church in general. Priests like Father Adam, they are just stretched in so many different directions,” Scott said. “And so it really hit me that this was what the Lord was calling me to do.”

The experience was reminiscent of the one that led his son on the path to priesthood, while the Potters were continuing their annual practice of attending the Defending the Faith Conference at Franciscan University in Steubenville, Ohio.

“I heard this young man talk about his own journey to considering being a priest, and I heard it as if it were an invitation directly from the Lord,” Father Adam recalled. “And that my dad was right there at that moment, whenever the Holy Spirit was speaking to my heart, is not lost on me.”

“I remember that event just like it was yesterday,” he said. “And I remember listening to that young man Father Adam just described, and knowing that he could have been speaking directly to my son. The place was packed, but sometimes you just know, OK, there’s a connection here.”

The Potters’ connection to the Catholic Church came relatively late, especially for Scott.

His wife, Heidi, was raised Catholic but hadn’t been practicing. Then a friend, a Jewish woman who had converted to Christianity, attended her first Mass, was suitably impressed and told Mrs. Potter, “I have to learn more.”

“And that was the catalyst for Heidi to, first of all, realize that she never was taught the beautiful, fundamental truths in the Catholic faith,” Scott recalled. “She one day called me at work and said, just unexpectedly: ‘Scott, I think I’m being called back to the Catholic Church.’”

Their son was in seventh grade at the time.

“When my mom first told me about this idea of the Catholic Church – that Jesus Christ, himself, founded – I had no reason to actually take to it, let alone be interested in it,” Father Adam said. “I was much more interested in basketball and girls at the time. But my heart was just captivated by this new-found faith and especially the sacraments of the Eucharist,” the consumption of the Body and Blood of Christ during Mass.

“That just set my heart on fire in a way that I know was totally from the Lord and not from me,” he said.

“What’s awesome about being in that part of the city is being especially present to the college students,” he said about the proximity to the University of Pittsburgh and Carnegie Mellon University. “I do what’s called spiritual direction, meeting one-on-one with different students as they’re trying to navigate arguably one of the most difficult and formative times of their lives: How do I be a Catholic and still try to be part of the world?”

In addition to his responsibilities as a deacon – including visiting the sick, performing baptisms and distributing the Holy Communion – Scott Potter continues his full-time job as a systems engineer at General Dynamic Mission Systems in the South Side. As part of the process of applying to study to become a deacon, he was asked to supply a letter of recommendation from his employer.

“I did not know my manager too well at the time, and so I was a little bit anxious,” he recalled. “Would he consider this to be: Oh, Scott’s heart is not at work. It’s elsewhere.”

As it turned out, there was no reason to worry.

COVID-19 limited the scope of that ceremony, but the following weekend, both Potters were present for Mass at St. Bernard Church, where Deacon Scott received a blessing from Father Adam. And to make the occasion truly memorable, the newly-ordained deacon had the honor of baptizing his first granddaughter, Rose, with his son the priest as one of the godparents.

That is an awesome experience that this priest and deacon, and the entire Potter family, will never forget.