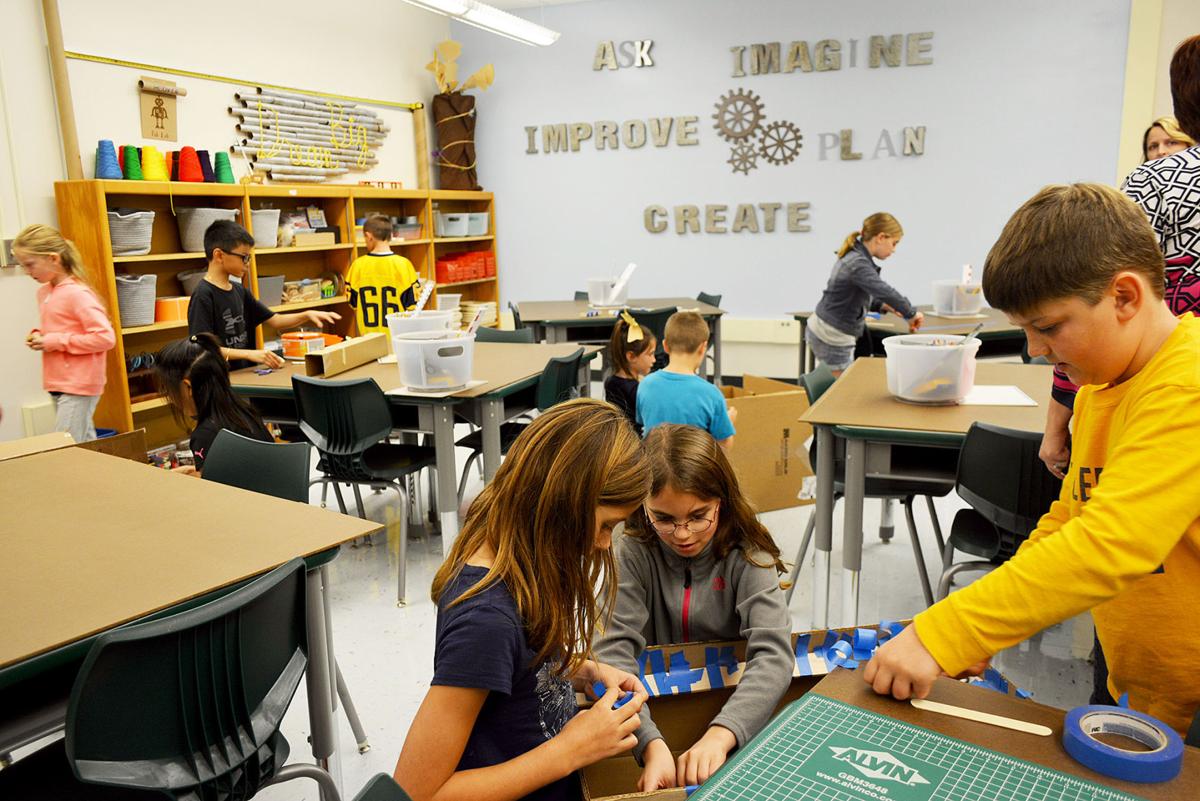 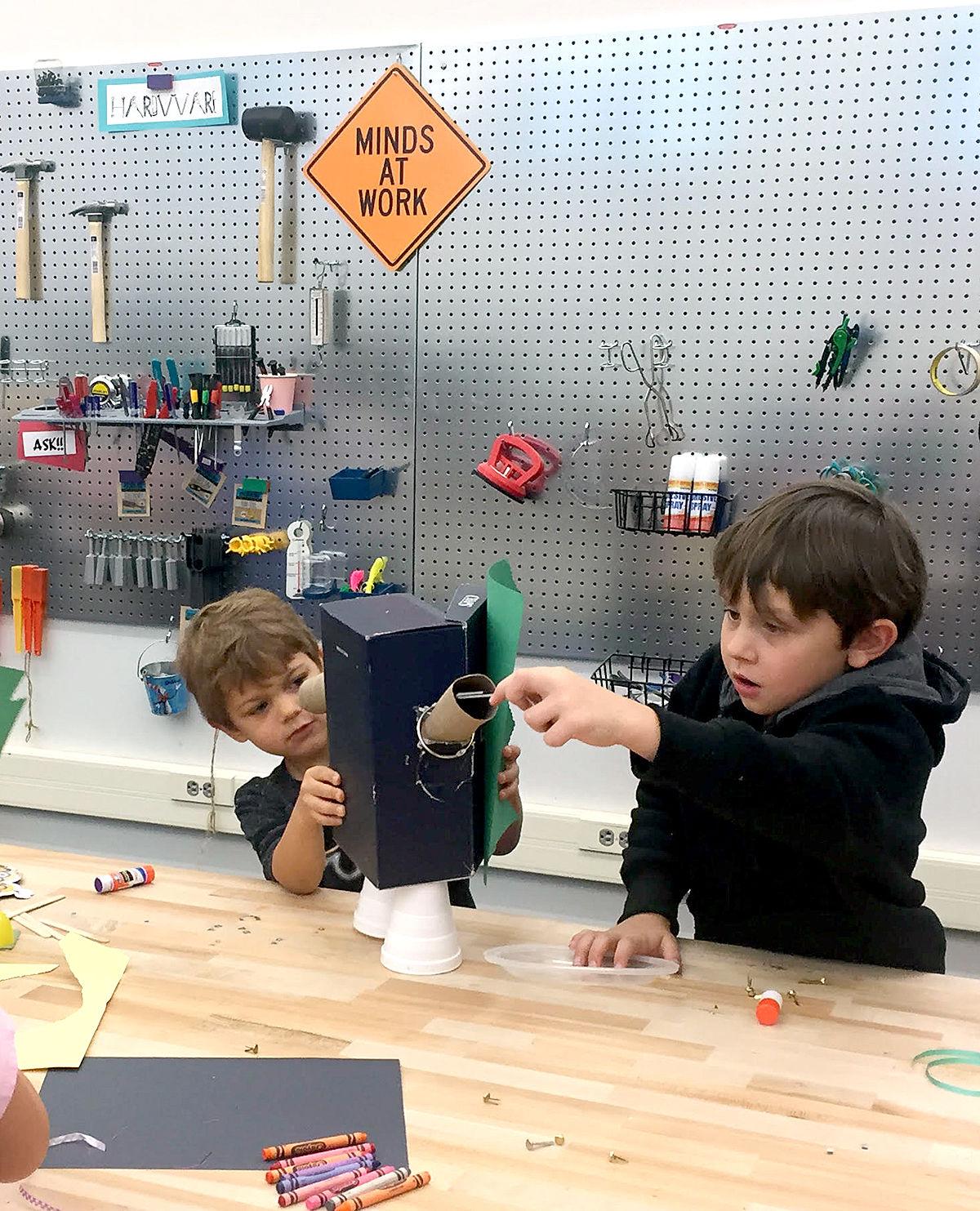 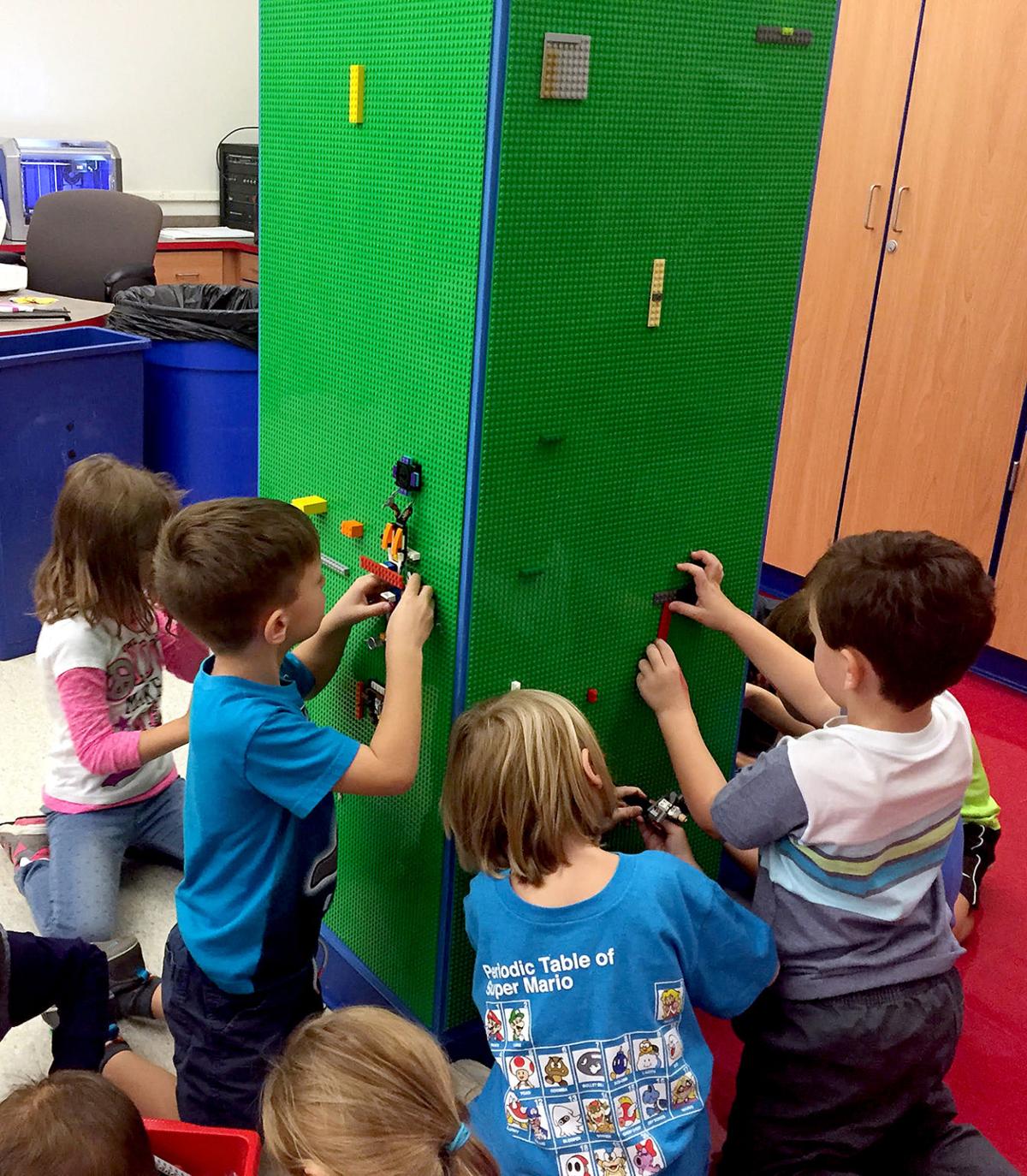 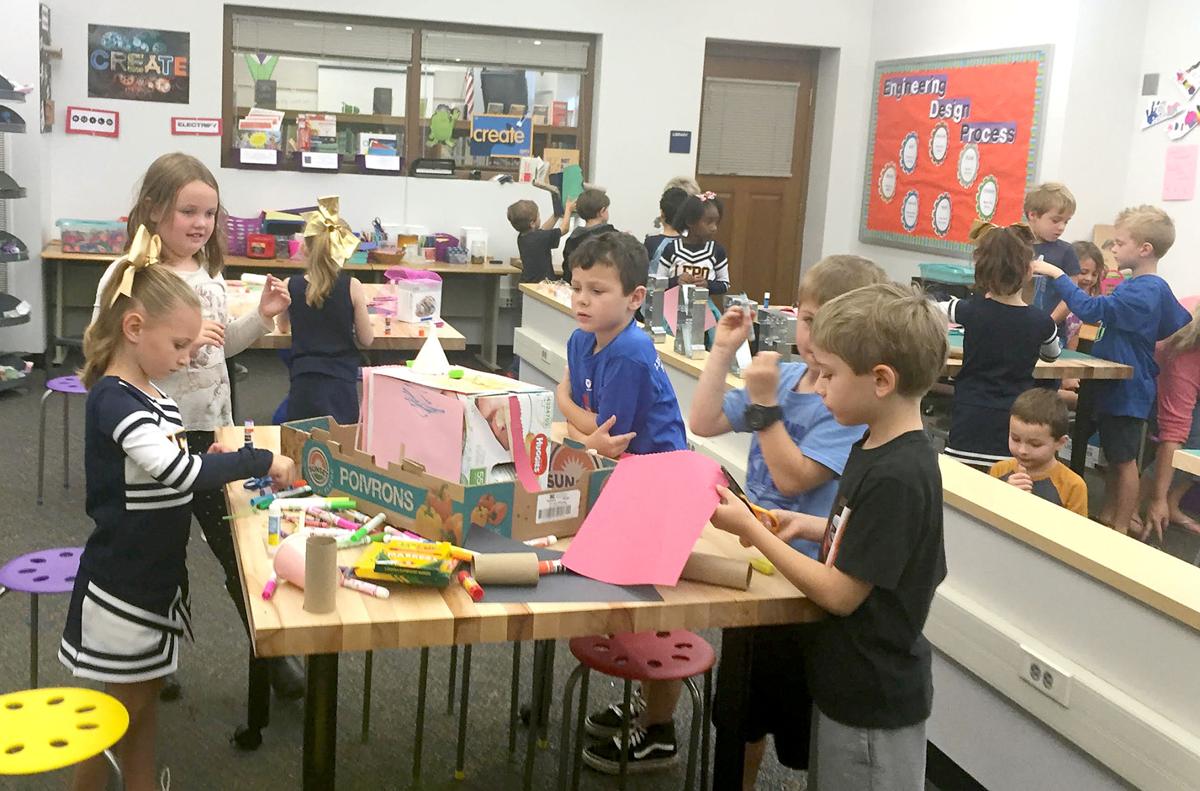 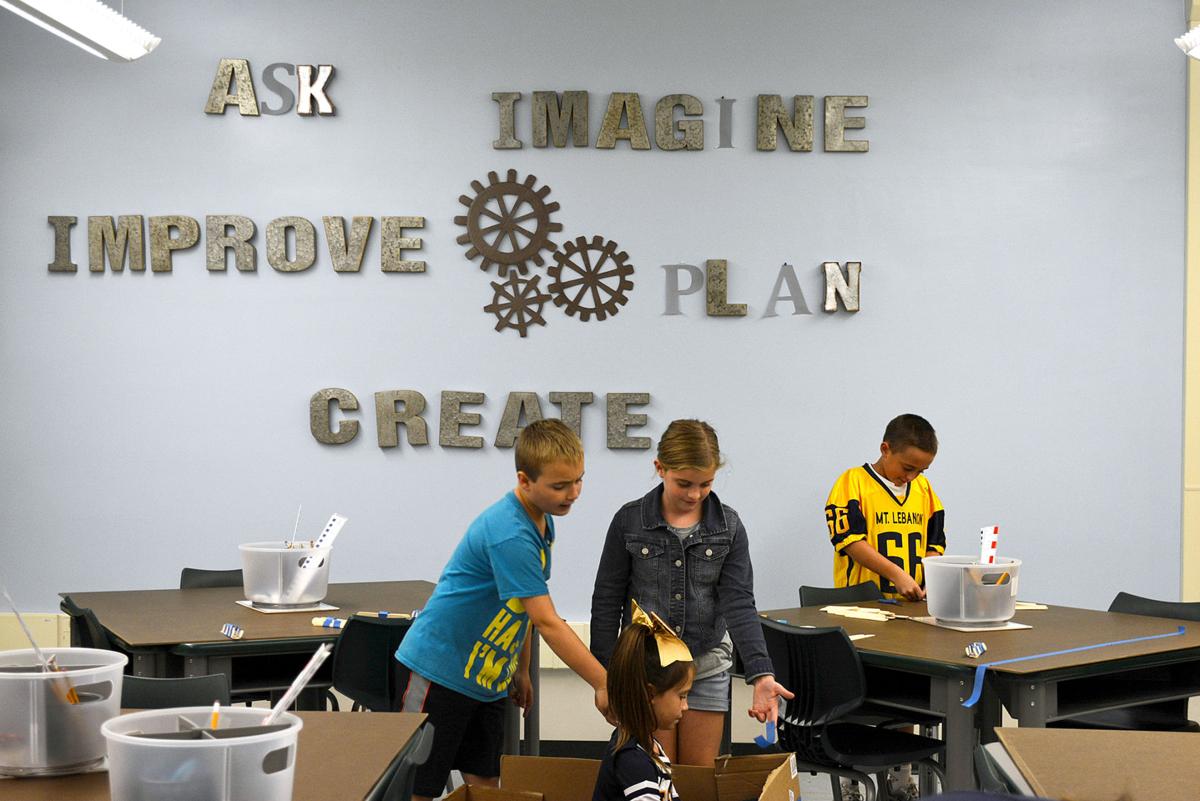 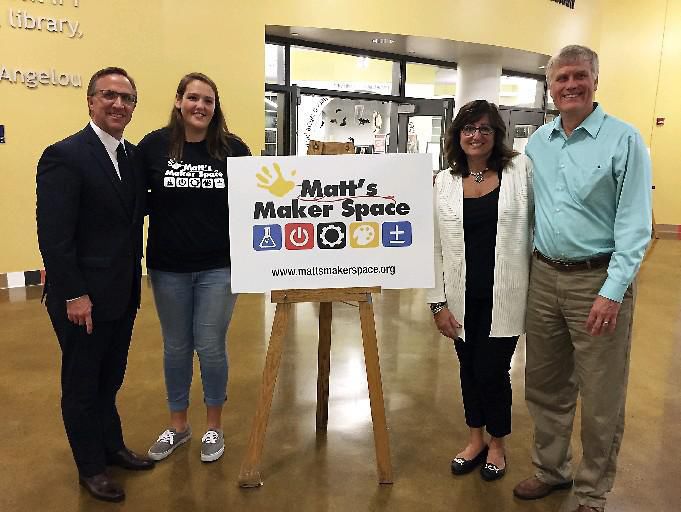 Standing from left to right, Mt. Lebanon Superintendent Timothy Steinhaeur, Anna Conover, Noelle Conover and Dave Conover, made the announcement in 2016 that Matt’s Maker Spaces will be developed in each of the district’s seven elementary schools.

In 2001, Matt Conover of Mt. Lebanon was diagnosed with non-Hodgkin lymphoma.

Matt’s mother, Noelle Conover, said the support from the Mt. Lebanon community throughout Matt’s battle with cancer and after he lost it was “amazing.”

“The community of Mt. Lebanon just really comes around people to support them. Unless you’ve felt this and been in a position to feel this you may not even realize how a community supports you.”

Conover said the community helped in any way they could, even starting a memorial donation fund in Matt’s name.

The community’s kindness, Conover said, led her family to give back to help themselves grieve.

“In order to get through our grief, getting outside of ourselves and looking outward was the key,” Conover said.

“We believe if he were here today, he would be a maker,” she said.

Conover and her husband Dave both grew up in Mt. Lebanon. When the community responded to the loss of their son, they thought the only thing they could do to make themselves feel better is to give back to the community.

First was a fundraiser selling homemade scarves. The community, like they had through Matt’s treatment, rallied together to donate $80,000 to cancer research.

The Conovers then started a fund called Matt’s Media 4 Kids with Cancer, which paid for gaming at the bedside of patients in the oncology unit at UPMC Children’s Hospital of Pittsburgh.

“Matt loved gaming, and when he was in the hospital, they didn’t have anything like that,” Conover said.

Then they put in a media room at Our Clubhouse, a Western Pennsylvania nonprofit that provides support to those affected by cancer. They also put one in Foster Elementary School, where Matt used to attend.

Last year, when Conover’s youngest child, Anna, who was 3 when Matt died, graduated from Mt. Lebanon High School, Conover felt it was time to give back again to the school district that graduated three of her children and has supported the family since Matt’s diagnosis.

With maker spaces gaining traction in school districts, administrators in the district wishing they had the funds to create them and Matt’s love for making, Conover said it was an easy decision. In total, the Conovers gave a $175,000 donation to the Mt. Lebanon School District’s Century of Excellence Capital Campaign, while allows community members to donate to a Mt. Lebanon public school.

“We really didn’t think it was that big of an investment for what we got back,” Conover said. “It’s such a great initiative; it’s phenomenal. The kids are learning in ways they’ve never learned before.”

Conover’s giving, she said, is a connection between the want to give back and her need to fulfill her passion.

“We wanted to make a difference,” she said. “But we also wanted people to know who Matt was.”

Maker spaces, simply put, are learning playgrounds. Everything goes as long as you play nice, work as a team and are learning.

They are where the kids can learn in nontraditional ways through collaboration, experimenting and making. The learning can be as simple as building using Legos, or as complicated as robotics, 3D printing and coding.

The 2017-18 school year is the first year with all the Matt’s Maker Spaces implemented at the district’s seven elementary schools: Foster, Howe, Hoover, Markham, Jefferson, Lincoln and Washington. The donation will support the project for the next three years.

Before undertaking the initiative, the school district needed to prepare teachers for how to best utilize the maker spaces. The teachers went through a boot camp, which included maker space-specific curriculum, and principals and district leadership visited maker spaces in other schools in the area as well as partnering with the Children’s Museum of Pittsburgh on how to design the spaces.

Michelle Murray, principal at Howe, said collaboration is a hallmark of maker spaces.

“It’s a hands-on approach to learning that is about making connections across different content areas,” Murray said. “There’s lots of ways to solve a problem, and that’s what we’re trying to teach kids is that sense of agency. They can put their heads together, collaborate, talk about it, exercise critical thinking and come up with some creative solutions and have a lot of fun.”

At Howe and several other elementary schools, the kids are learning the basics of coding – something that’s often thought of as an overtly complex and sophisticated language. The lessons the maker spaces teach the kids and the knowledge it gives them, like the basics of coding, is “transformational,” Murray said.

At Foster, the maker space is called Matt’s Media Room after it was implemented by a different Conover donation about seven years ago.

“The kids have a personal connection here because Matt went to school here and some of them know his family,” said Foster’s librarian Bridget Belardi. “On the first day of school this year, I took each class in and really introduced them the space and gave them a tour. We talked about who Matt was, that he wasn’t here to experience this and how his parents wanted a space where kids could have those experiences.”

Belardi said she knows when the kids are truly learning when they are teaching others about what they’ve learned in the maker spaces.

Each school has different protocol for how classes can use the room, but each class in every school will be in the maker space a couple times a year.

The maker spaces, Conover said, will create “a better generation of thinkers.”

“What I love about the maker space is there’s no right or wrong answer in them,” Conover said.

For Conover, the impetus for the donation was for Matt.

“At the end of the day this project not only gives back to the district, because giving back helps us,” Conover said.

“This keeps the memory of our son alive.”