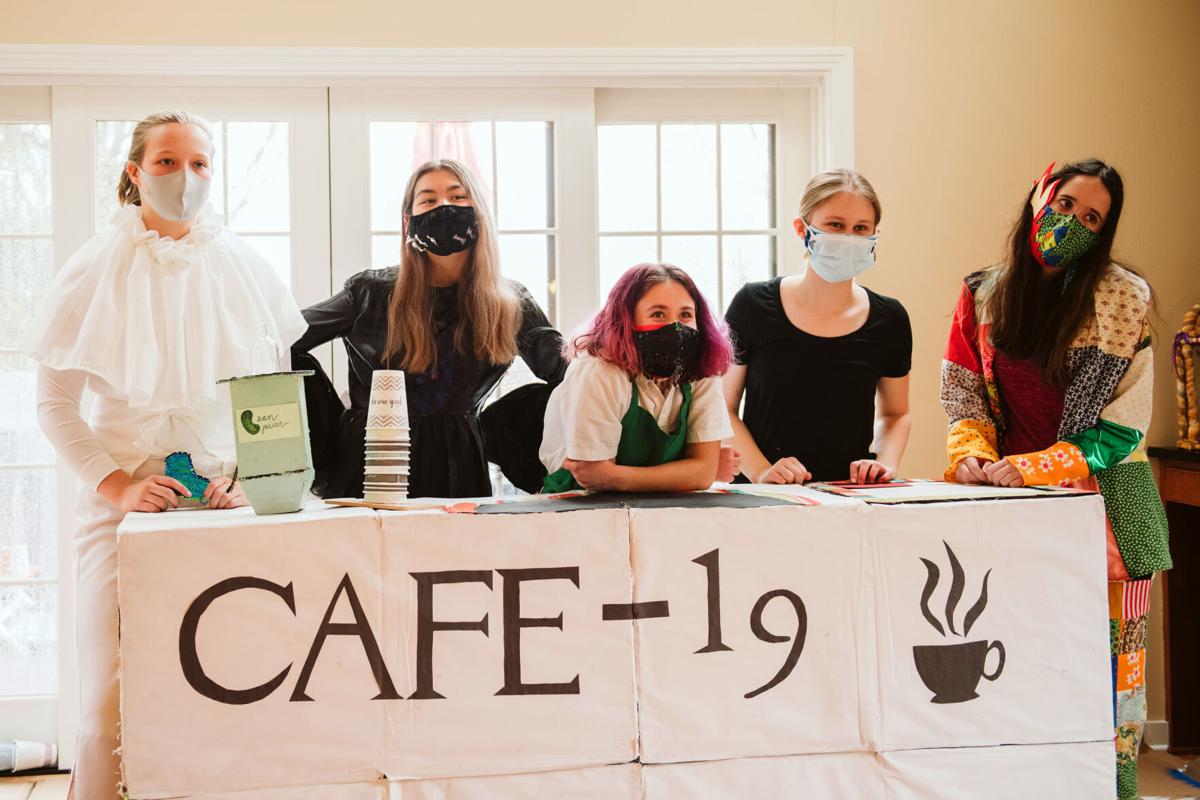 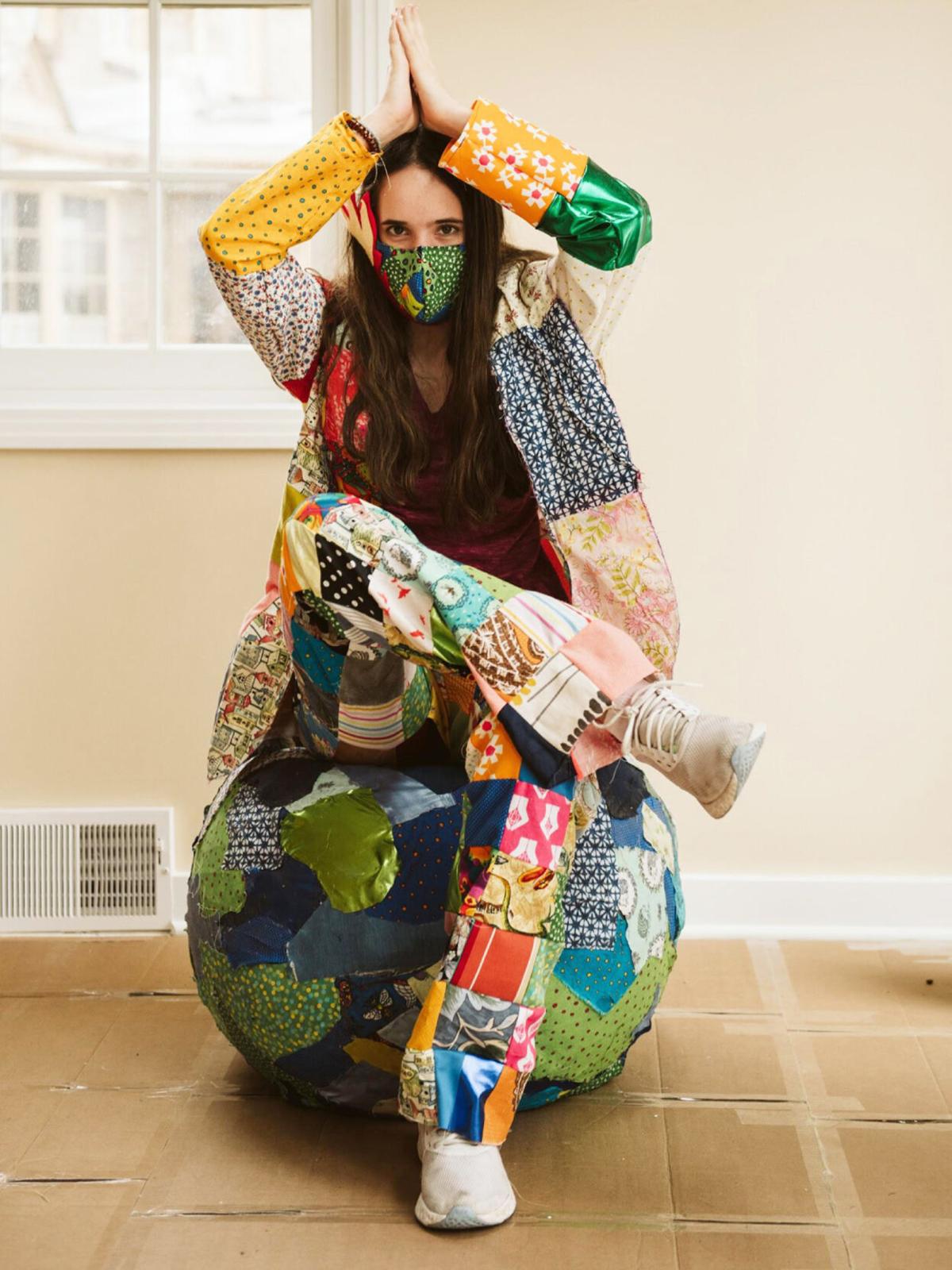 Nikki LaSota sits atop the "earth," made from a yoga ball and patchwork fabric to match the Sisters Grimm’s hand-sewn pantsuit and to resemble the chaos of 2020, the skit’s theme. Both the Earth and the costume were made from the remnants of the fabric used to make homemade masks at the beginning of the COVID-19 quarantine. 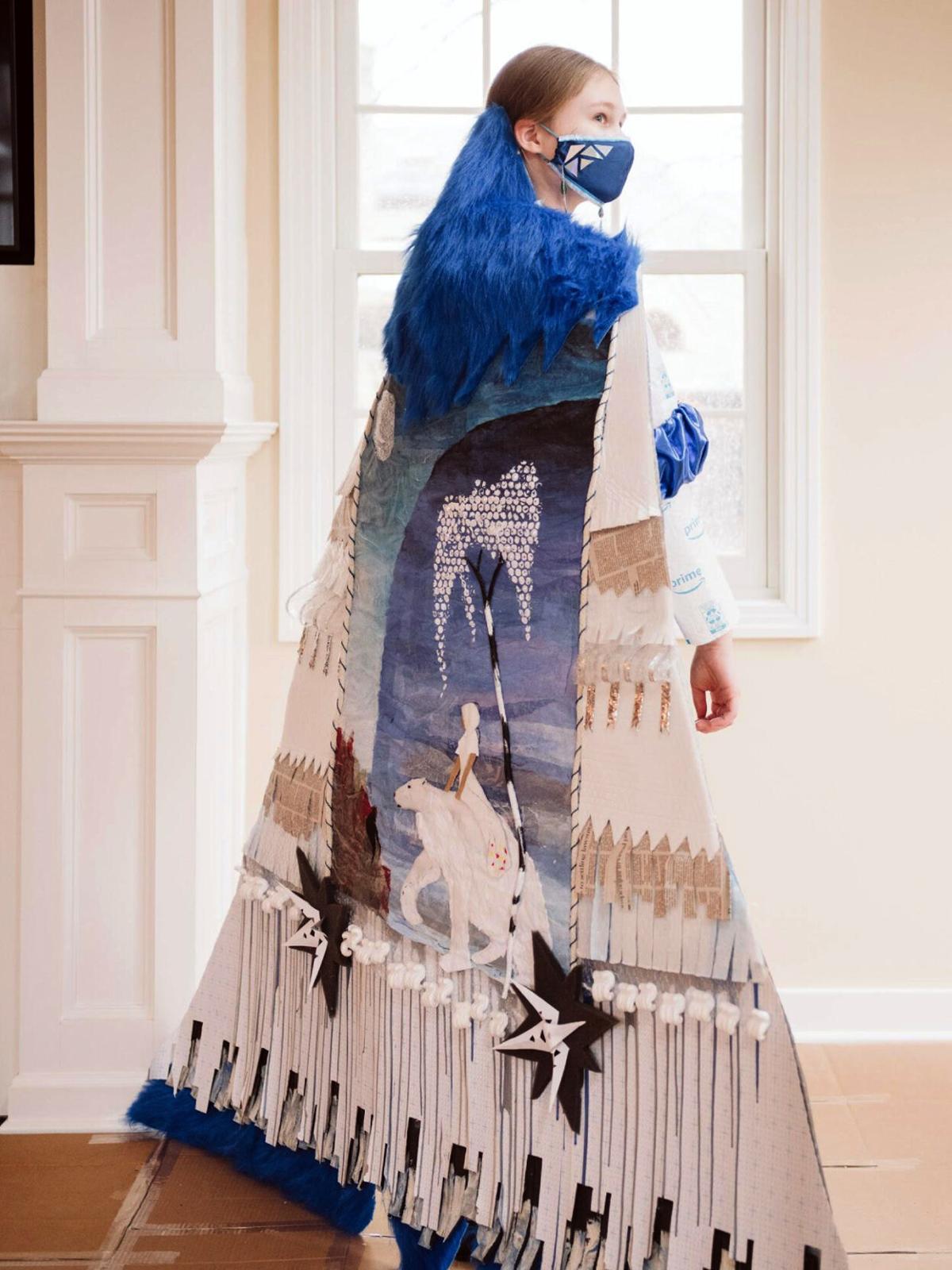 Natalie McGee wears a colorful cape, made almost entirely from mail packaging materials such as bubblewrap, foam rubber, newspaper, tissue paper, packing peanuts and insulated bags, a nod to the abundance of online orders and mail deliveries of 2020. 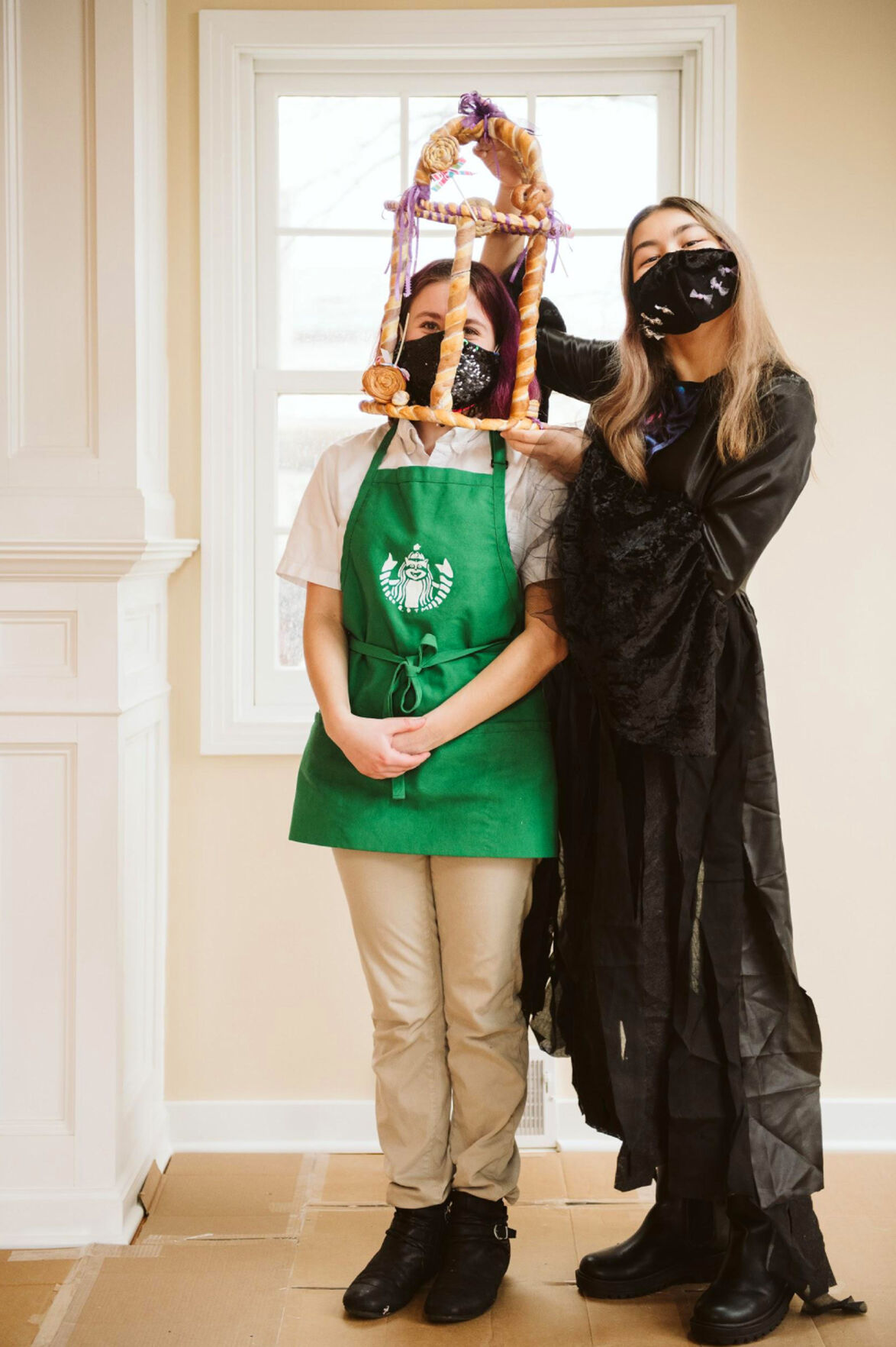 Witchy Melody Reynolds demonstrates how she plans to trap the youngster, Leah Vuillemot, in a "pretzel cage." Thanks to the witch’s story, Hansel and Gretel, the youngster learns that it is best to always wear your “mask” when facing the world. 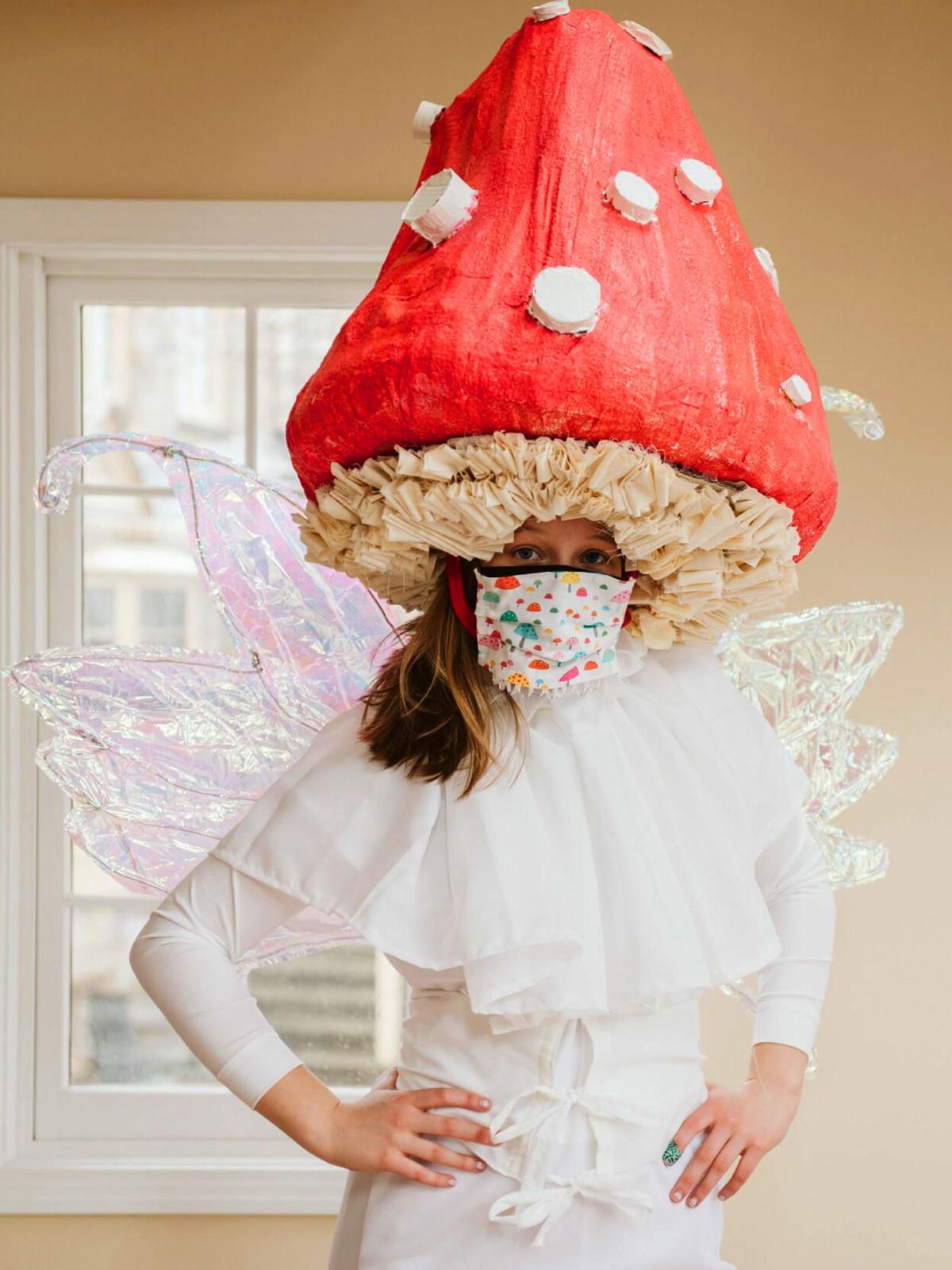 Anna Mares' Fairy Godmother mushroom ensemble is hand-sewn and made from several different parts, including a floor-length gown, a ruffled collar designed to mimic the ruffles under a mushroom cap, a laced bodice, glittering wings made from iridescent cellophane, and an enormous mushroom cap made from plaster, foam rubber, and an old lampshade. 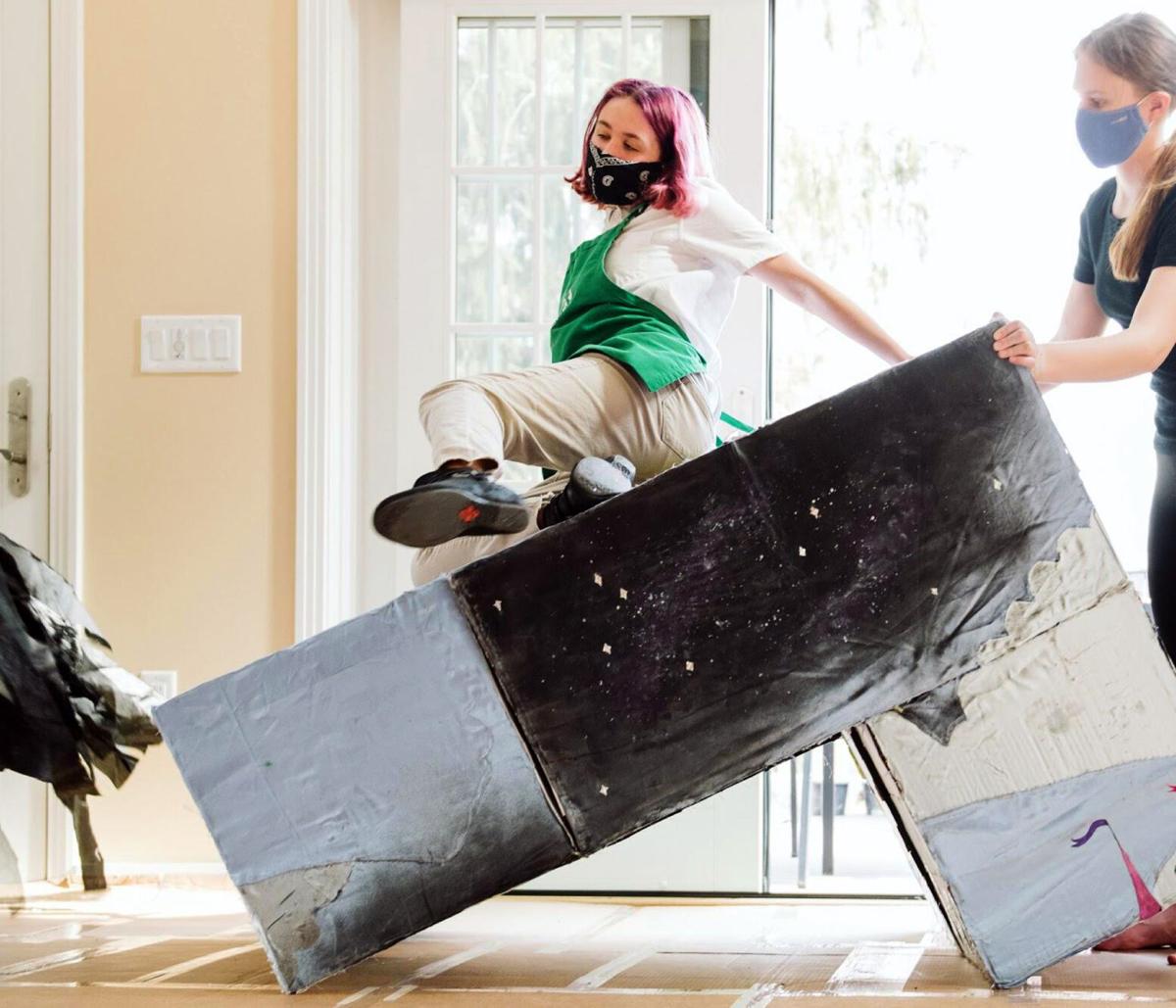 Set transformation: Each of the eight cubes that make up the set is constructed from six laminated cardboard panels with edges beveled at a 45-degree angle, allowing the sides to fit together and be self-supporting. The cubes are attached with old canvas drop cloths on both sides of each edge, which was sown along the joint with twine to support the stress of the weight of the blocks on either side. The design allows the set to maintain its structural integrity throughout each of its different orientations, including the one pictured here with Leah Vuillemot, left, and Natalie McGee. 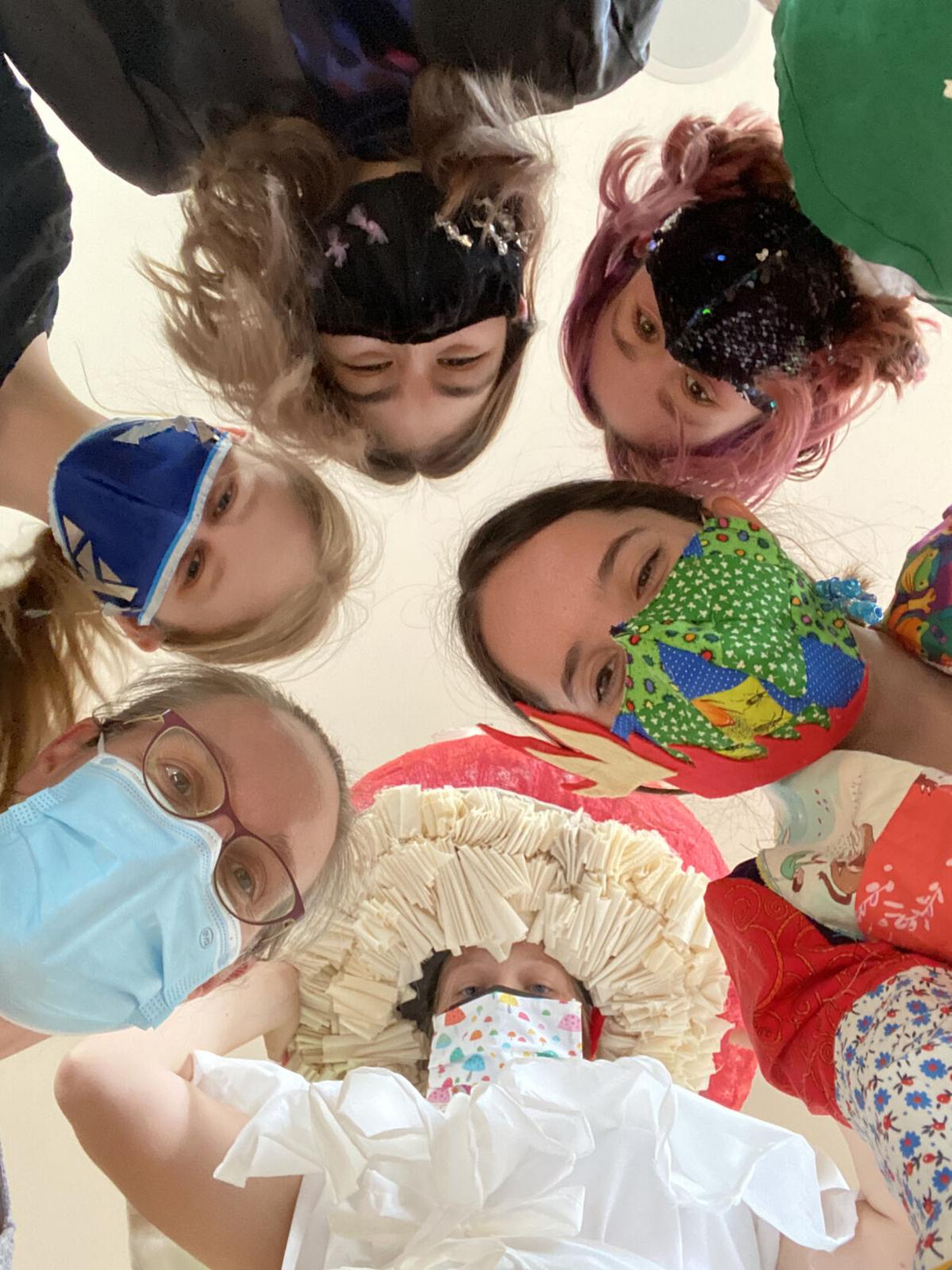 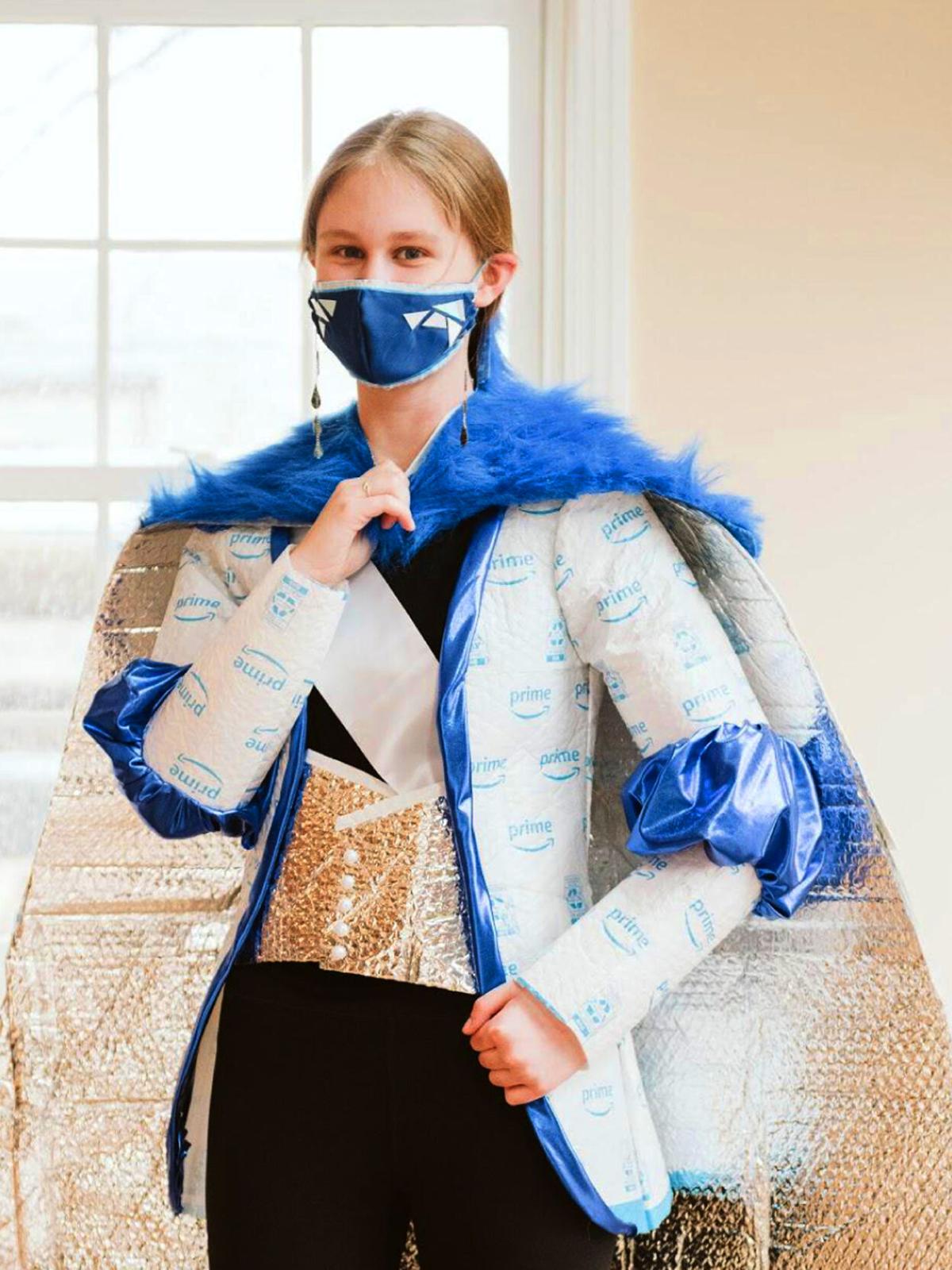 Natalie McGee plays the “East of the Sun and West of the Moon" polar bear. 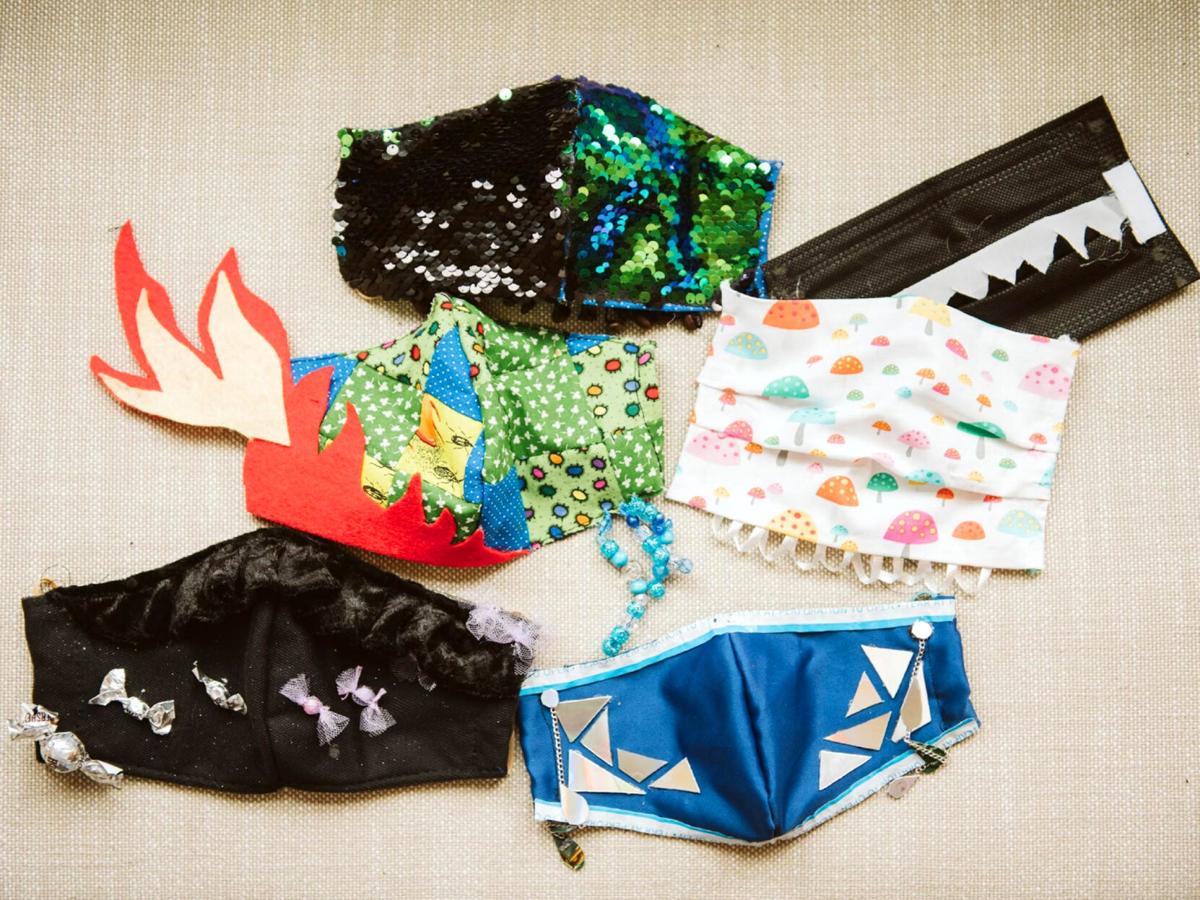 The face masks used in the project are hand-sewn and decorated by the team to represent the personalities of each character.

Natalie McGee plays the “East of the Sun and West of the Moon" polar bear.

The face masks used in the project are hand-sewn and decorated by the team to represent the personalities of each character.

A decoratively cloth-covered yoga ball may or may not have had something to do with the disruptive anomaly that was 2020.

What happened to her and four classmates is that they placed second in this year’s Odyssey of the Mind World Finals, impressing judges with their video presentation based on a certain “Fee-fi-fo-fum!”-type fairytale, in which Nikki portrays a character called, appropriately enough, Sisters Grimm.

She and fellow juniors Anna Mares, Natalie McGee, Melody Reynolds and Leah Vuillemot earned the top spots in the problem-solving program’s regional and state tournaments, prior to being edged out internationally by a team from Poland.

Among the variety of problems presented for solution, the Mt. Lebanon students chose “to create an original performance depicting a youngster character that travels to a storybook land when a magic bean grows into a beanstalk.”

If that sounds familiar, what they developed as a skit is anything but.

“Hello, and welcome to ‘2020,’ the hip new reality TV show brought to you by the producers of ‘Tiger King,’” Anna announces in the video they submitted for the state and world competitions, making the first of many pandemic-related cultural references. “One chosen youngster will be swept away on the journey of a lifetime, and learn to remove her mask and be her true self.”

Leah plays that particular youngster, who is shown as working as a barista in “Café-19,” and not being particularly attentive to those who are placing orders. She inadvertently grinds the magic beans, and, well, it’s not quite Jack and the Giant.

Instead, Sisters Grimm appears as “your magical, all-powerful producer,” and she does her thing with her yoga-ball earth. The shakeup results in a veritable crossover episode of fairytales, with Natalie portraying the polar bear from “East of the Sun and West of the Moon,” and Melody taking a turn as the witch from “Hansel and Gretel.”

They proceed to defeat the whole “true self” premise by telling about how their revelations – the bear as a prince, the witch as a cannibal – didn’t work out well. And so the youngster ends up learning the life lesson, as Natalie’s character puts it:

“You must never take off your mask. It is far too dangerous.”

That applied to real life, of course, when the students finally got together in person to work on the project, after months of planning through Google Meet. So they decided to incorporate the face coverings as an essential part of their eight-minute skit.

“Using a mask we already owned, we created a pattern and took inspiration from our characters’ costumes and personalities to customize each mask,” Leah explains in a “behind-the-scenes” segment that follows the skit on video.

The team actually produced two videos, and the first version, submitted for the regional tournament, concludes with a different life lesson.

“It was ‘Don’t be yourself,’ which was a fun take on a classic fairytale story. We figured, why not? Just switch it up and feature villains instead of heroes,” Melody explained after the team members learned of their worldwide success.

“When we got to states, we were trying to think of what we could do better,” she said. “We had already had the masks idea, and we sort of shifted to ‘Always wear a mask,’ whether physically or over your character.”

They also followed the directive to use baking soda from Odyssey of the Mind sponsor Arm & Hammer in developing their presentation, including Natalie making the basic components of a “pretzel cage” and Melody creating soccer-ball-sized bath bombs for a special effect.

A particularly special aspect is the main set feature of the skit: an interconnected series of boxes reconfigured for various scenes, from the “Café 19” counter to the “Hansel and Gretel” oven.

“For Odyssey, there’s a cost limit” – it’s $125 – “and so you can’t make it out of actual construction materials. So what we ended up doing was taking old cardboard boxes and cutting them into square, and laminating six or seven layers on top of each other with glue,” Natalie said. “After it dries, it becomes really strong, like wood or even stronger.

“We were able to cut those and do the necessary calculations, and put them into the right shapes so that they all fit together to form a cube,” she explained. “And then we connected them all together into that configuration, so they would all kind of fold and unfold.”

Further elucidation about the project is provided for the benefit of judges in the final seven minutes of the video.

“They had to create that differently this year, because normally, you’d just be able to talk with the judges,” Anna said about the virtual component of this year’s competition. “It actually gave us a little more freedom to show the entire process. They could see me taking a lampshade and putting chicken wire on top of it” to create the massive mushroom-shaped hat she wears as the narrating “naturally charismatic Fairy Godmother.”

All five members of the Mt. Lebanon team have Odyssey of the Mind World Finals experience, traveling together with a few other members to Iowa in 2018 to present their take on E.B. White’s “Charlotte’s Web.” They finished 12th among 60 teams in their age division and second for style points.

This year, they also earned the coveted Ranatra Fusca Creativity Award from judges for the Pennsylvania tournament, another feather in the cap for individuals who obviously have learned to work exceptionally well together.

“Over the years, I have discovered teamwork has a much deeper meaning for me,” Nikki said. “To work as a successful team, you need to have self-awareness, respect, and courage, resulting in award-winning creative compromise.”

Providing plenty of support on the adult side are Natalie’s mother, Dr. Kerry McGee, who hosted the in-person gatherings, and Laura Mares, Anna’s mom and a professional photographer, working on the project’s videography.

The team may have yet another secret for success.

“Mrs. McGee figured out a way to keep us all up and energized. She has a giant freezer in the basement full of ice cream and snacks,” Anna said. “Let’s say we’ve practiced the skit 10 times. Everybody’s about to, like, die. She’s like, ‘OK, ice cream break!’ And then we’ll eat ice cream, and we’ll come back and be ready to go.”

With their masks back on their faces, of course.

To view the Mt. Lebanon High School video submitted for the Odyssey of the Mind Pennsylvania Tournament and World Finals, visit www.youtube.com/watch?v=ARk25-9xBPM.