You are the owner of this article.
Edit Article Add New Article
You have permission to edit this article.
Edit
Welcome, Guest
News
Sports
Life & Culture
Events Calendar
Lottery Results
Fish Fry Map
Weather
Sponsored Content
Classifieds
e-Edition
South Hills Living
Get Our Newsletter
Get the Almanac
Advertise With Us
Submit Content to The Almanac
Contact Us
About Us
1 of 14 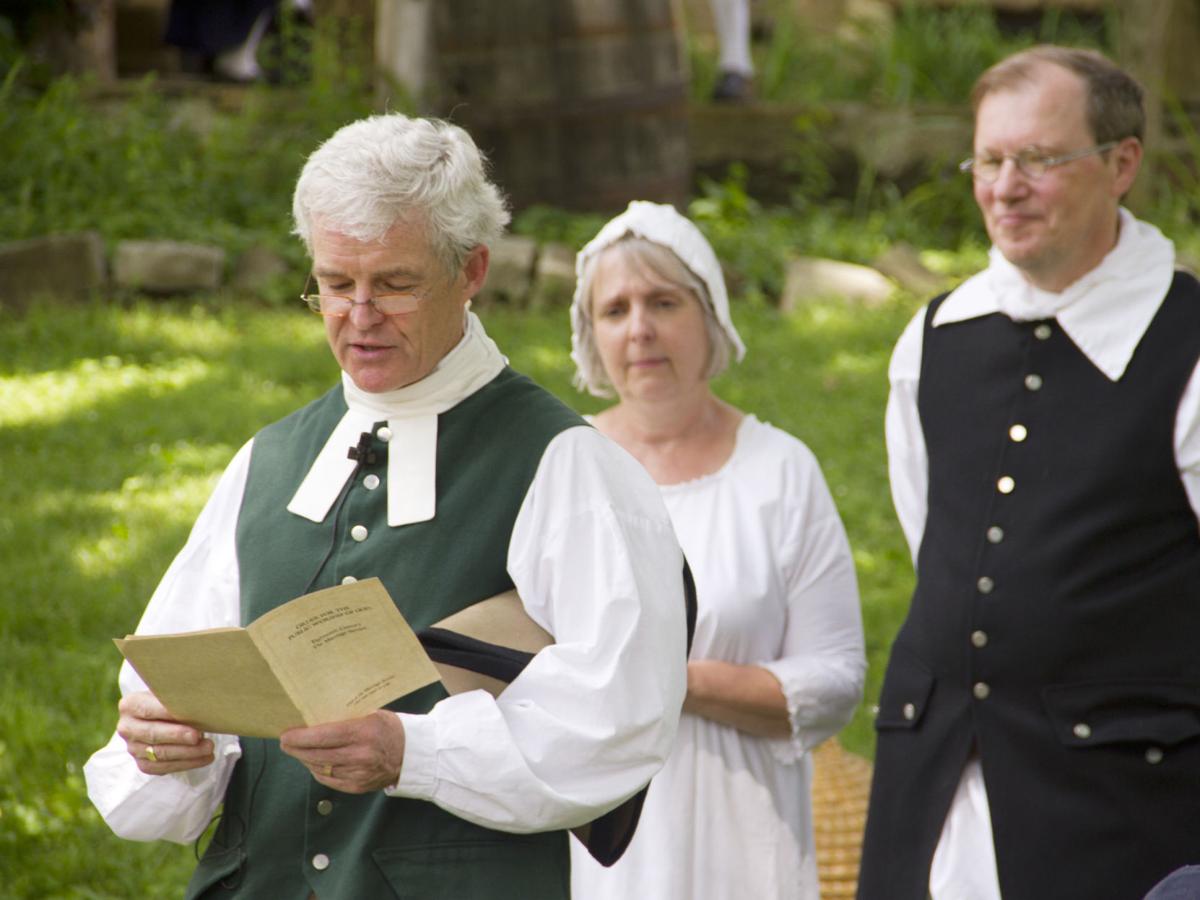 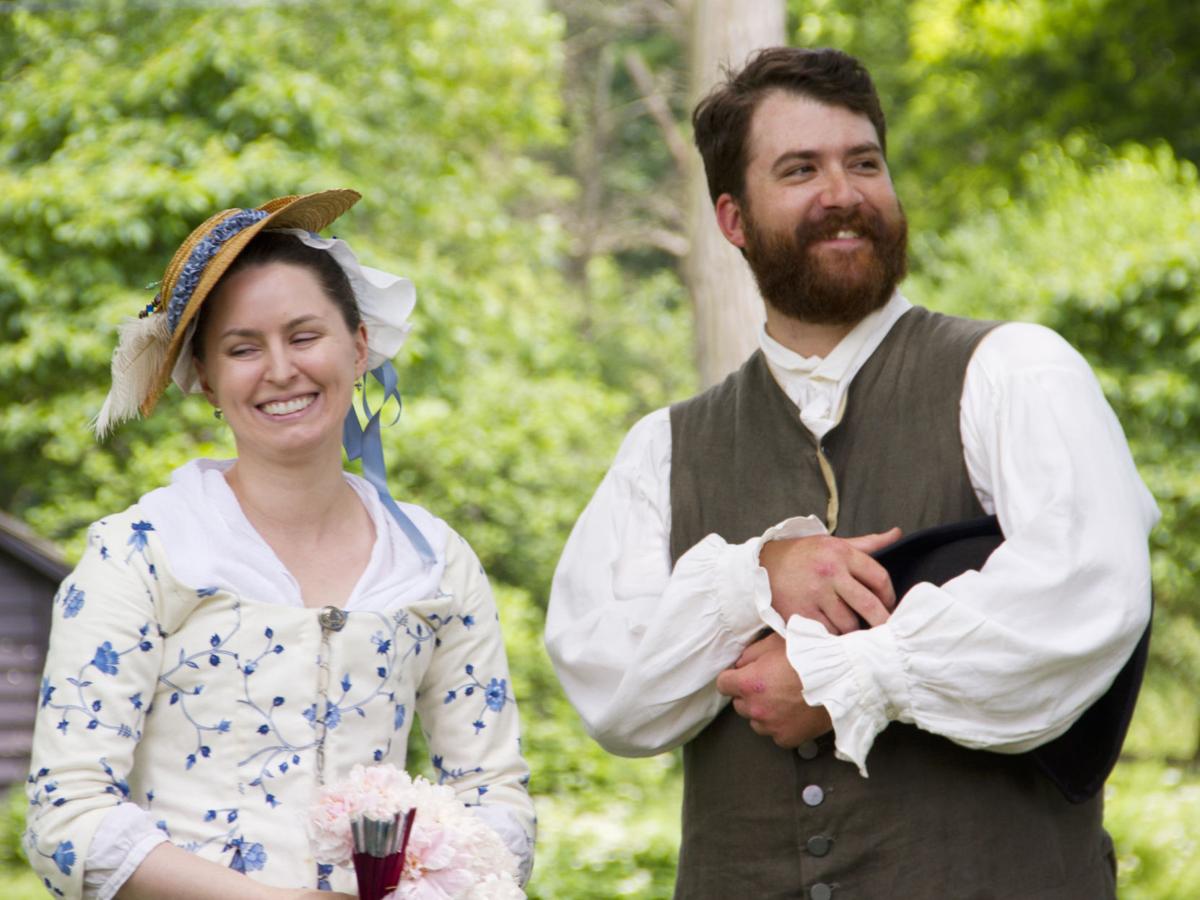 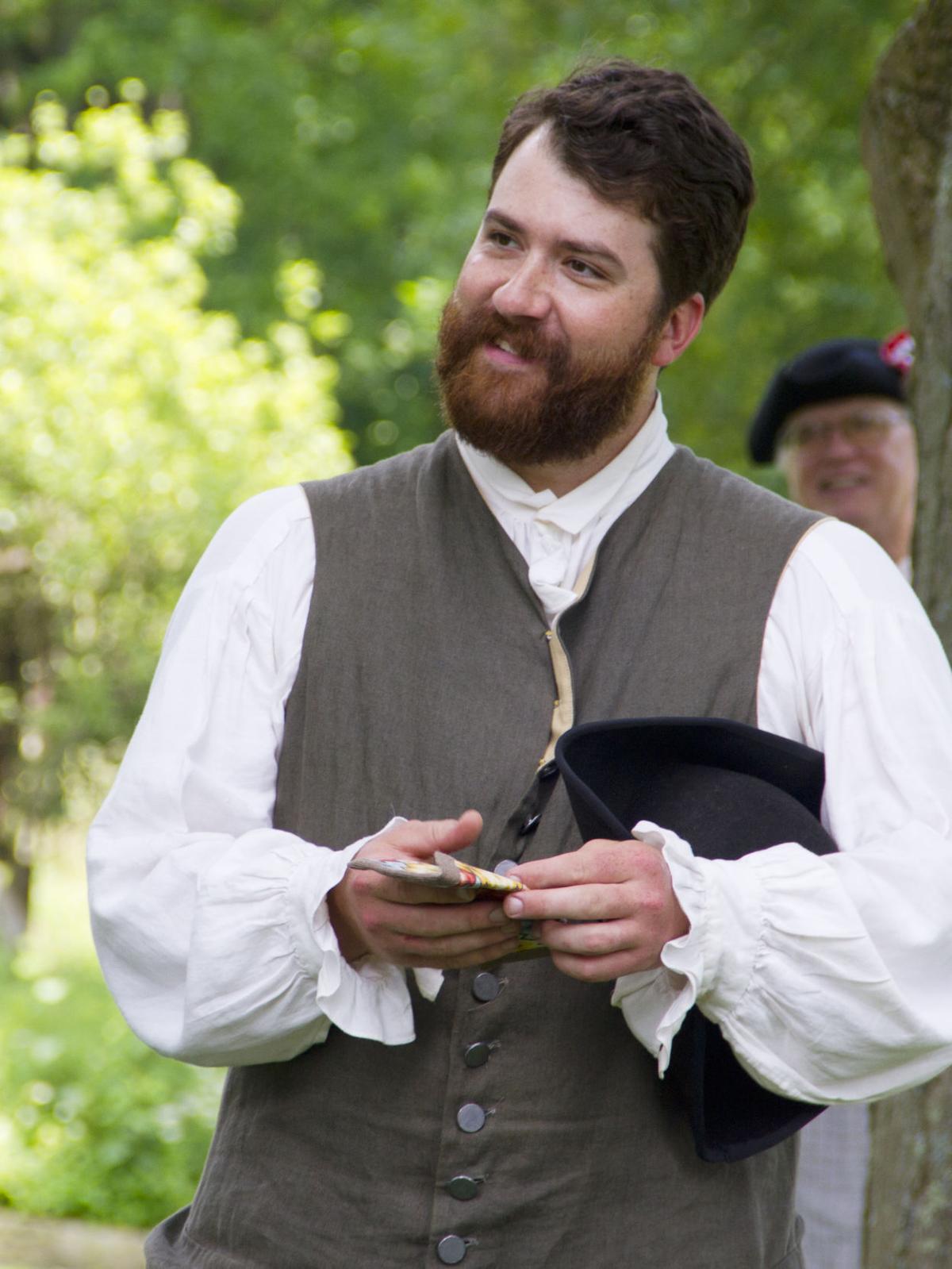 “William Wallace of Cross Creek” thanks his new wife for her gift to him. 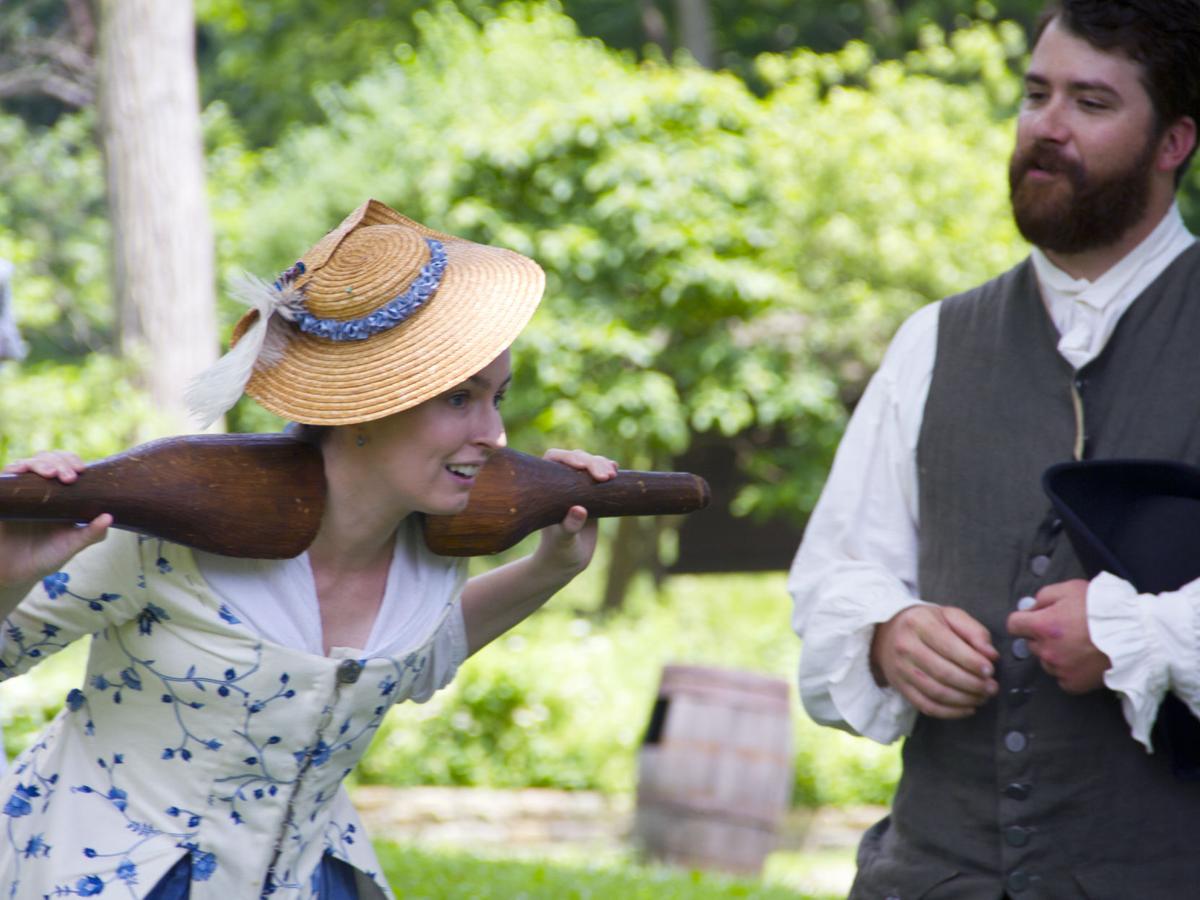 “Mary Miller Wallace” tries on her new husband’s “gift” to her. 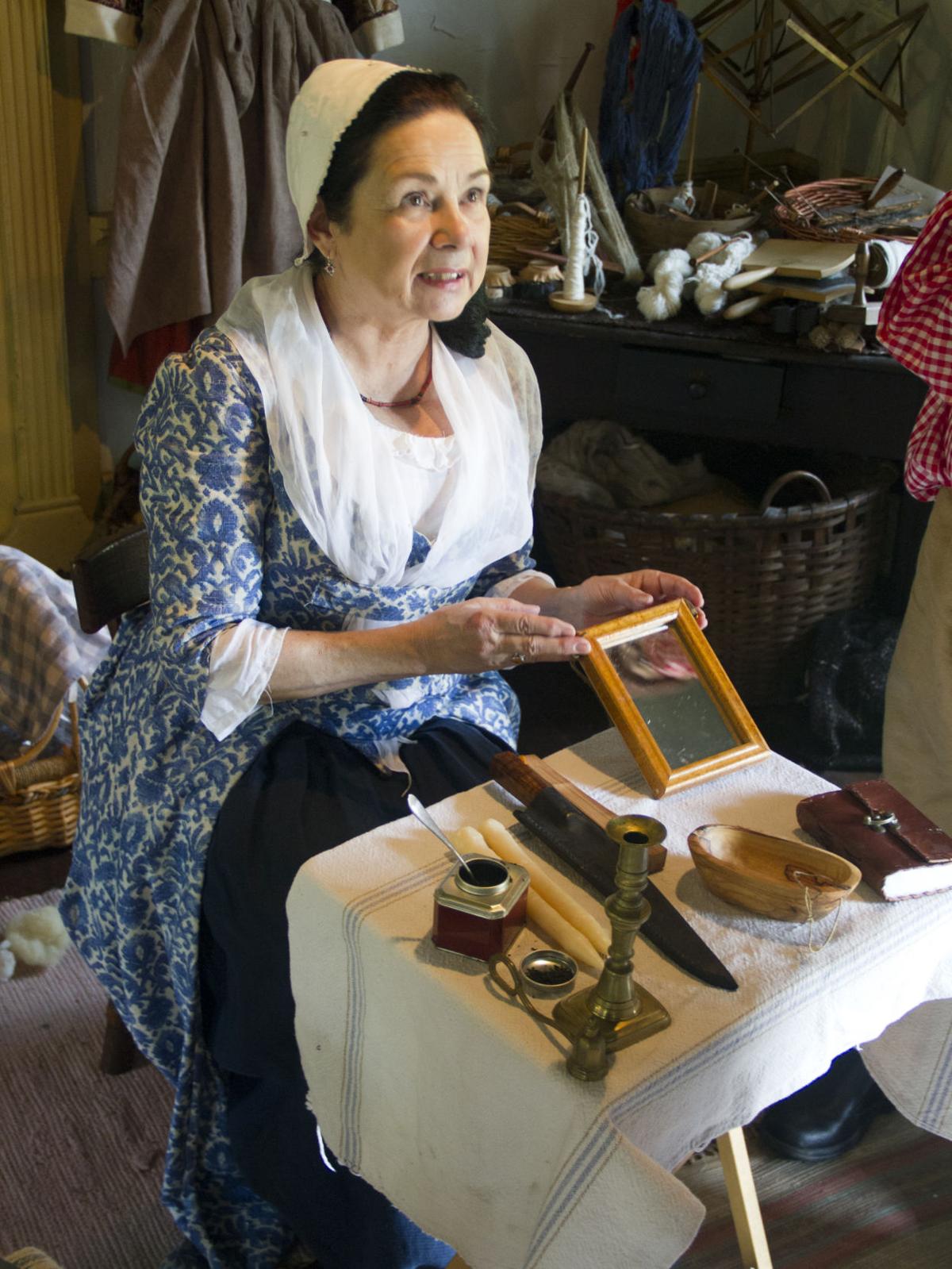 Barbara Bockrath describes typical wedding gifts of the 18th century, based on the information provided in “Planting of Civilization in Western Pennsylvania” by Solon Buck. 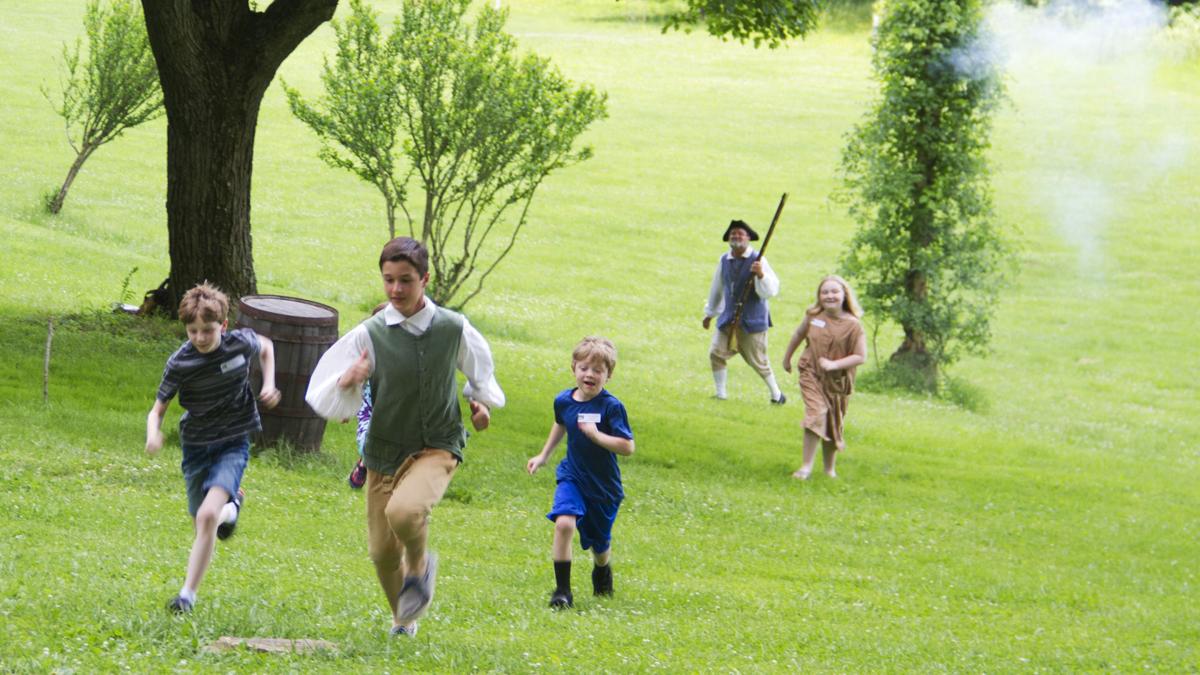 Young guests participate in the "bottle run," for a container of lemonade. 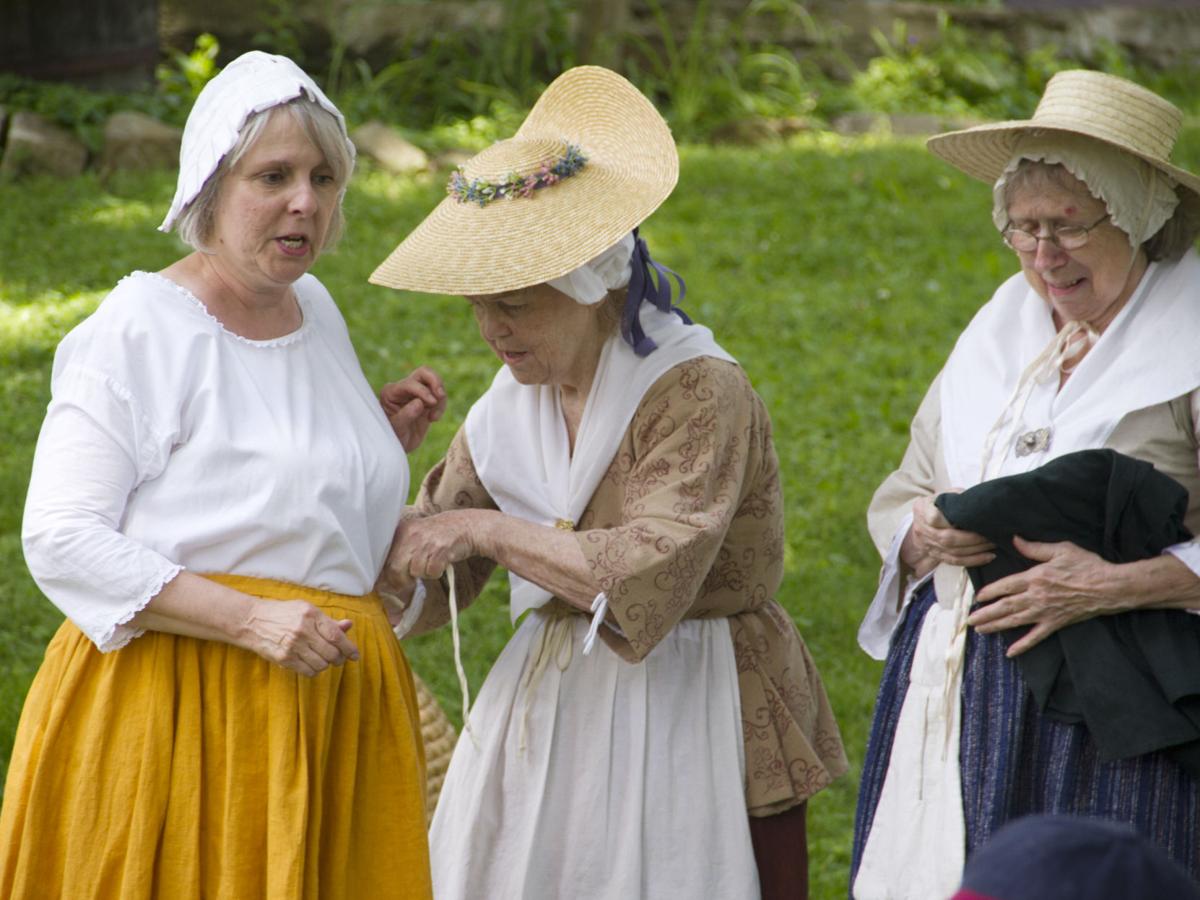 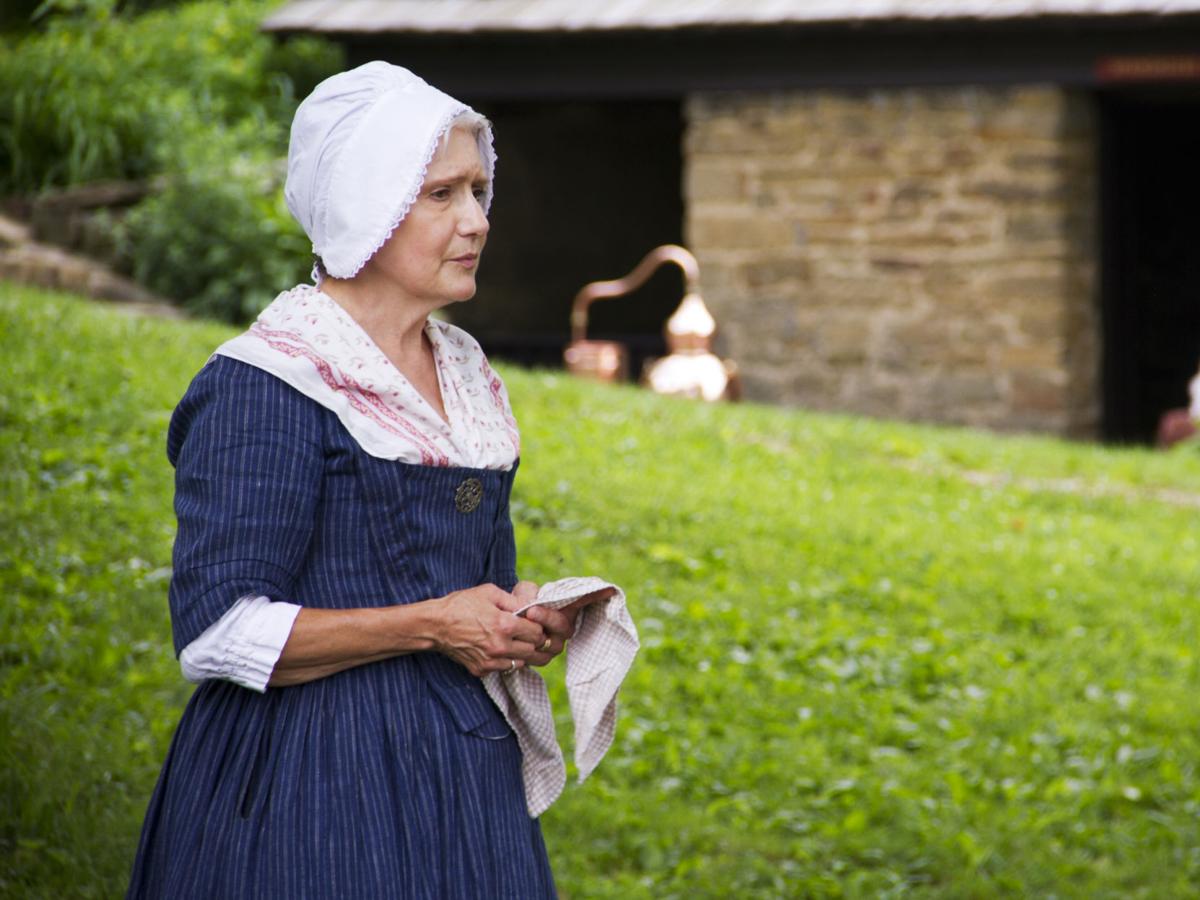 Mary Pat Swauger briefs guests on the known details of an 18th-century wedding. 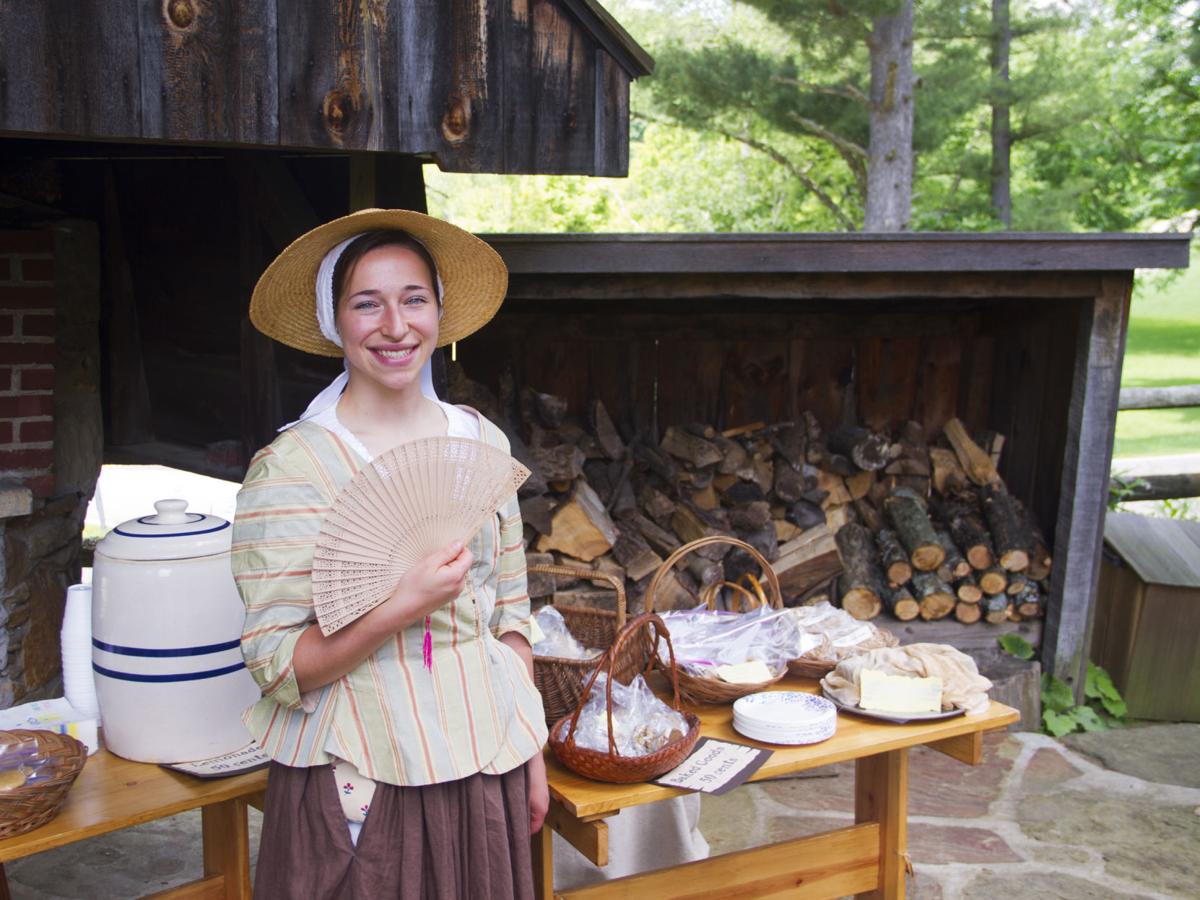 Emily Mattocks attends to the bake sale during the event to benefit the Oliver Miller Homestead. 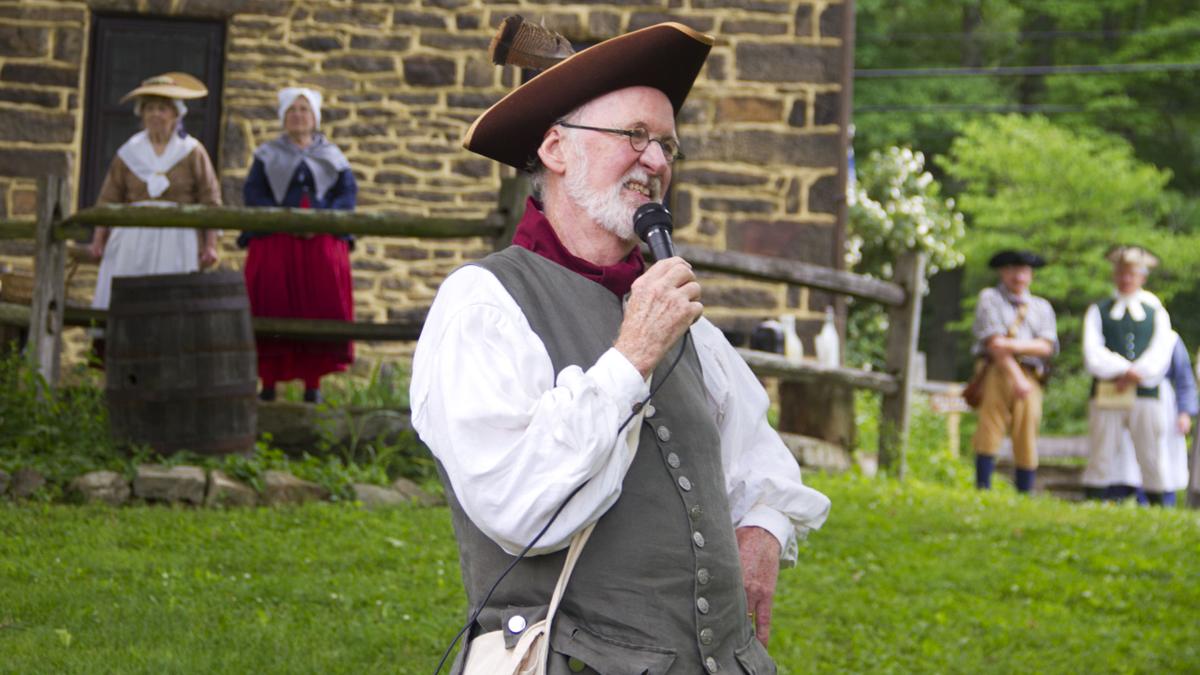 Dale Main describes the tradition of the "bottle run." 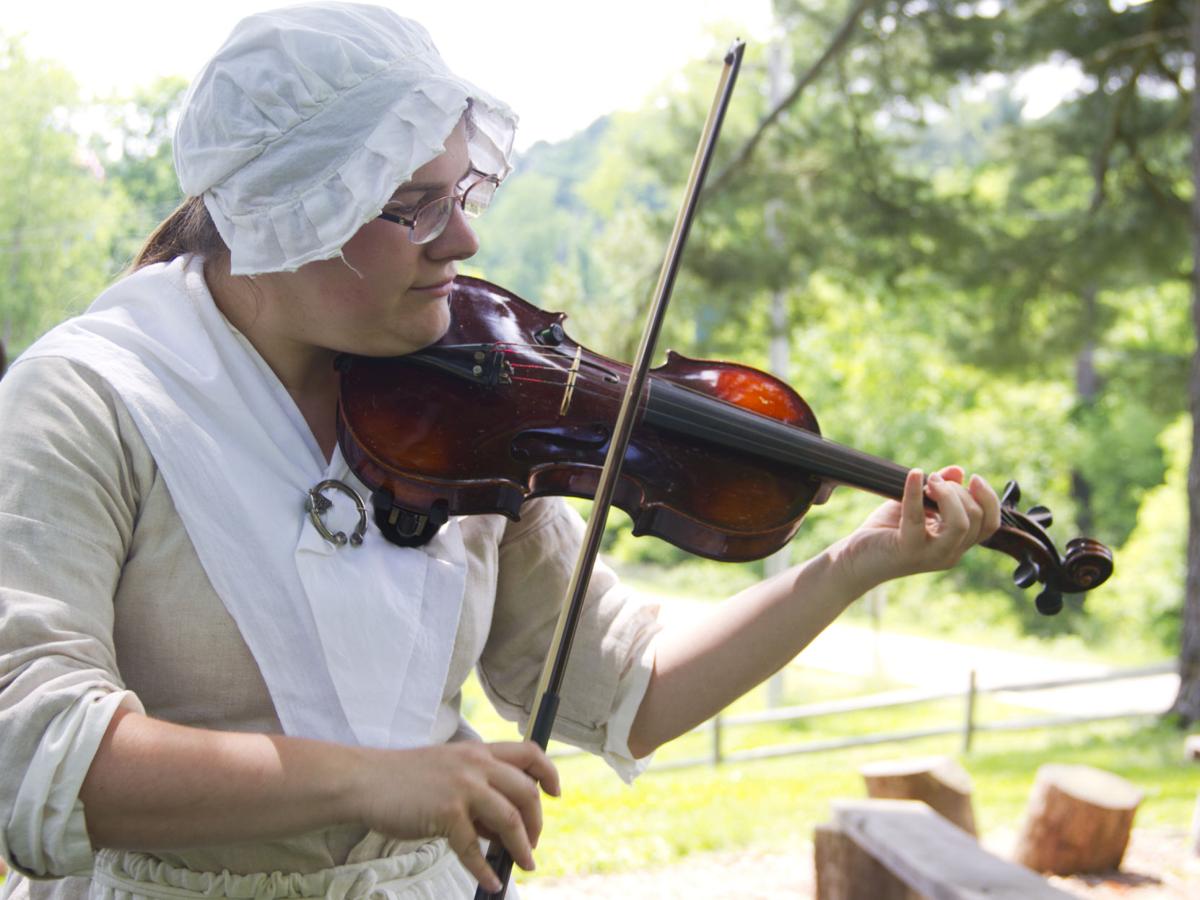 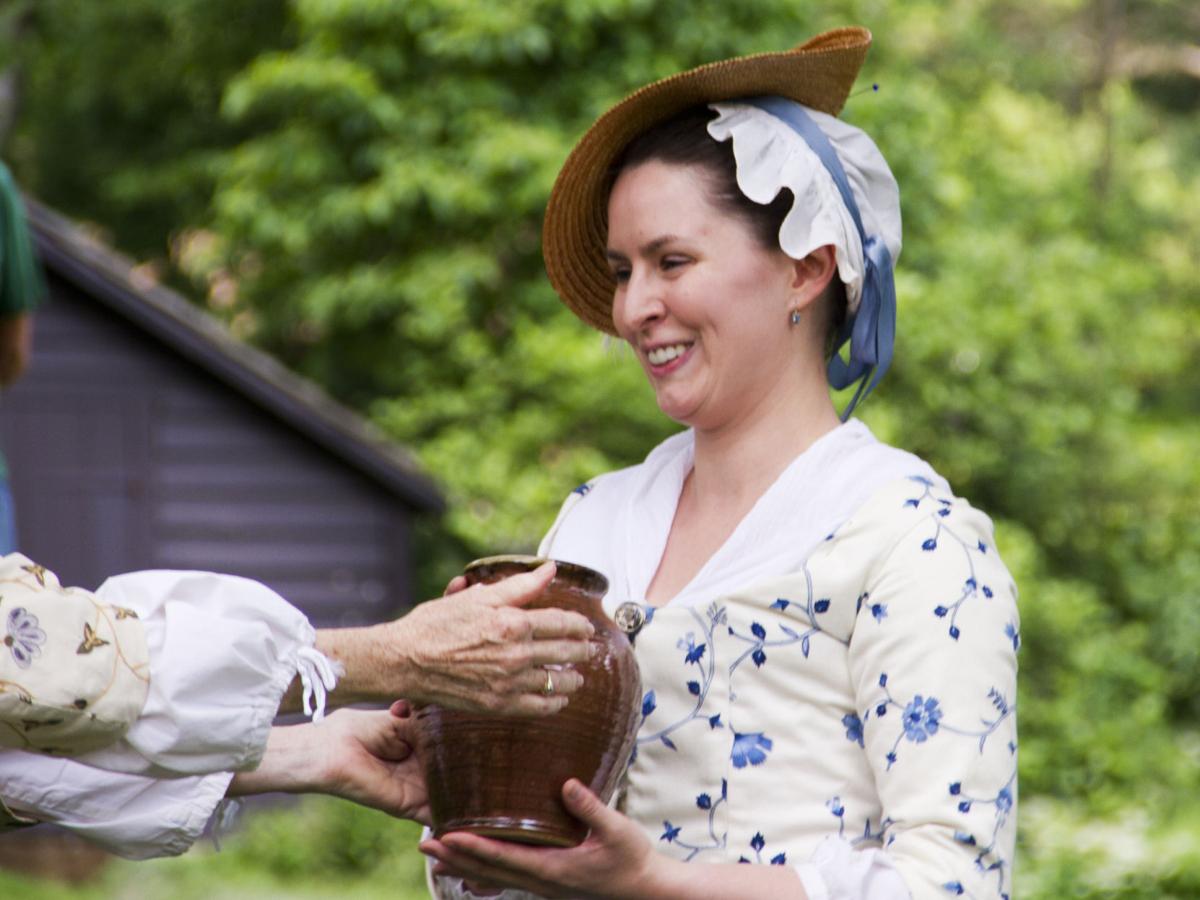 "Mary Miller Wallace" receives a gift from a "guest." 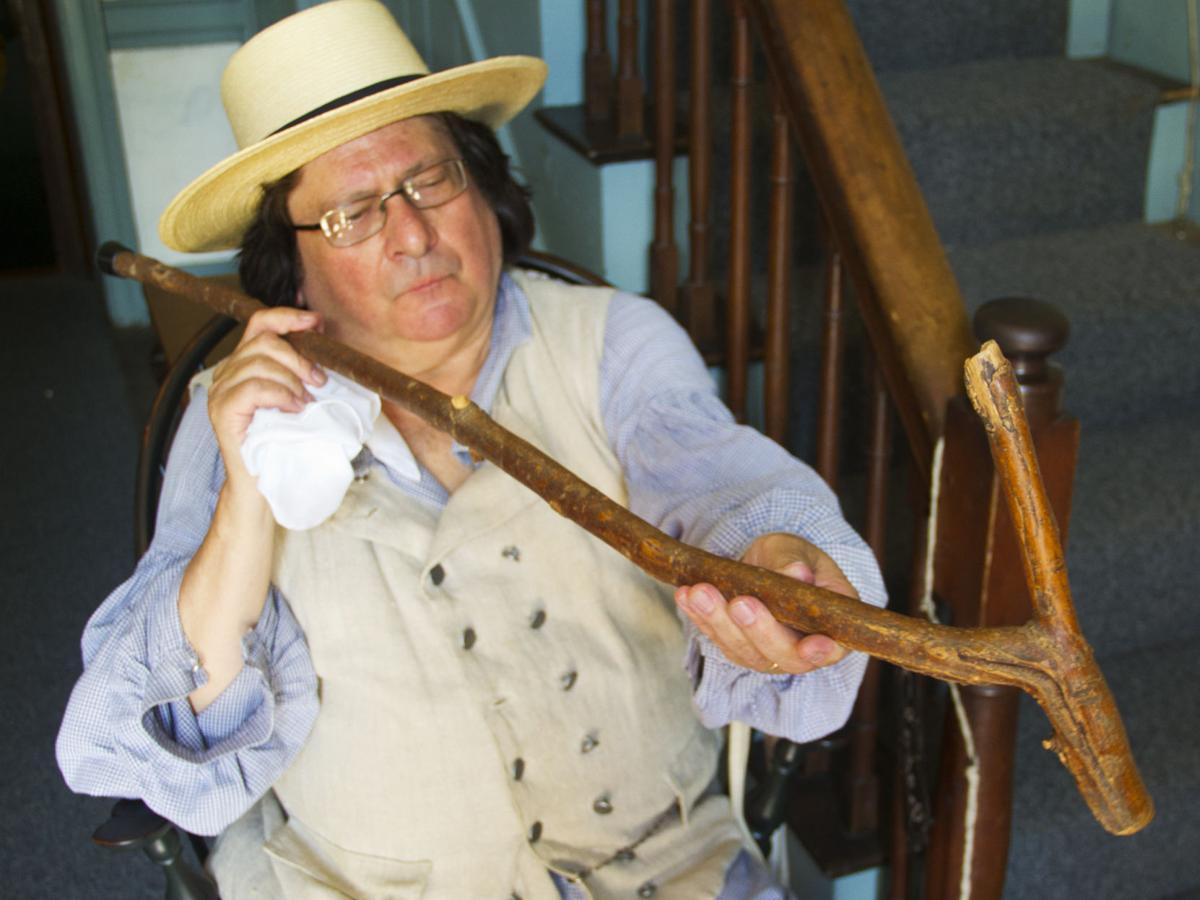 Phil Haines displays a crutch he crafted from a tree branch. 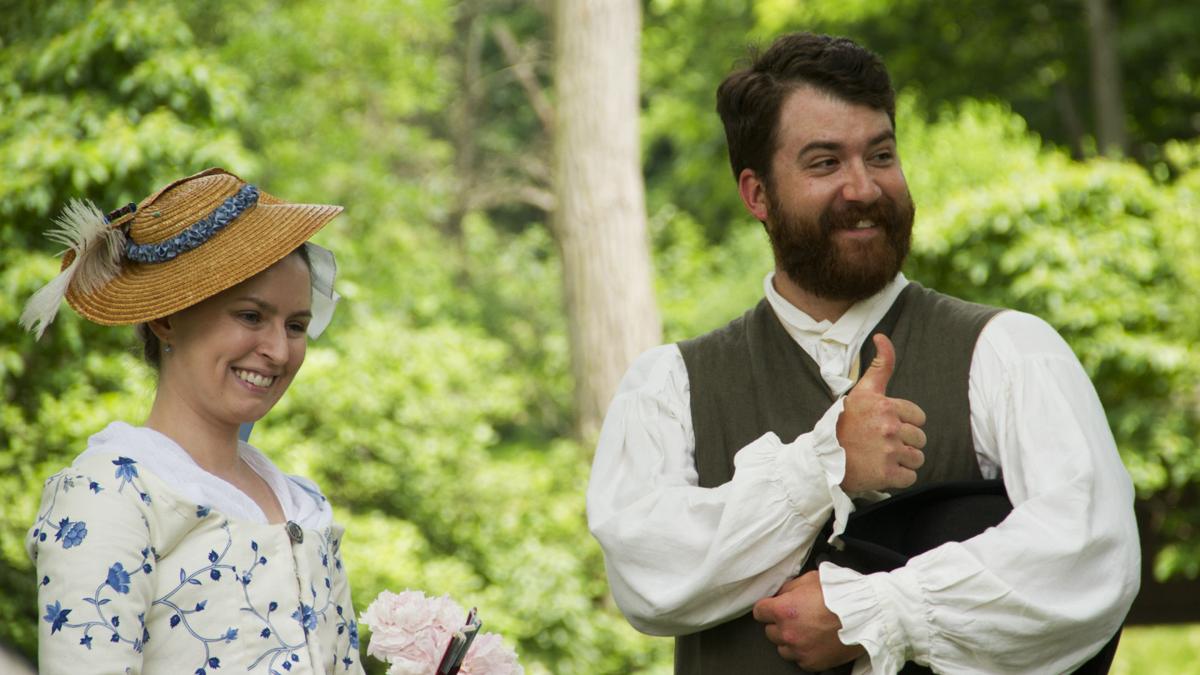 Giving the thumbs-up might not have been an 18th-century practice, but Max Bader signals that everything is fine. 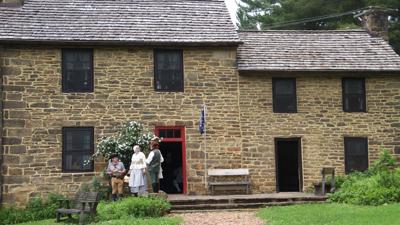 “William Wallace of Cross Creek” thanks his new wife for her gift to him.

Mary Pat Swauger briefs guests on the known details of an 18th-century wedding.

Dale Main describes the tradition of the "bottle run."

"Mary Miller Wallace" receives a gift from a "guest."

Phil Haines displays a crutch he crafted from a tree branch.

Giving the thumbs-up might not have been an 18th-century practice, but Max Bader signals that everything is fine.

A custom of a couple of centuries ago had brides and grooms presenting gifts to one another at their weddings.

“I fashioned this yoke for you,” William Wallace said as he revealed a handsome hunk of wood for his new wife, “made specially to fit your delicate shoulders, so that your work may be ever more easy.”

Mary Wallace, née Miller, promptly tried it on for size. Then she handed her husband his present.

“And for you, I have this hand-stitched wallet. It is empty now, but it is up to you to fill it.”

The exchange drew laughter and applause from guests visiting the Oliver Miller Homestead in South Park for Sunday’s presentation of “A Frontier Wedding (Or Two).” Lisa Schoon and Max Bader – he happens to be senior ranger of Allegheny County Parks’ South Region – had plenty of fun portraying Mary and William.

“About every five years, we have a re-enactment wedding here,” Mary Pat Swauger of the Oliver Miller Homestead Associates told the audience. “So this really is a special event, more special than our usual special-event days.”

The re-enactment always features the nuptials of the 22-year-old daughter of Oliver Miller, himself, and a gentleman from Cross Creek, who actually were married July 12, 1787. Lacking any other means of transportation, the groom’s party walked all the way from western Washington County for the ceremony.

The “Or Two” aspect of the event is what was known in the day as a “shift” wedding, with the reference to a chemise-type undergarment, which is what the bride often wore.

“If a woman was widowed and unable to pay her previous husband’s debt in full, she could be stripped of everything, including her own clothing,” a handout given to guests explains. “If a woman remarried in her shift, she proved she had nothing. Once married, she no longer belonged to her deceased husband, and the remainder of the debt was erased. She could then put on clothes given to her by her new husband or friends.”

As such, Bethel Park resident Beth Chatham portrayed the bride dressed in her shift, with some friends dressing her right after the ceremony, with her real-life husband, Jim, playing the groom.

Much of the script for the re-enactment comes from the memoirs of historian and clergyman Joseph Doddridge (1769- 1826) bearing the title of “Notes on the Settlement and Indian Wars of the Western Parts of Virginia and Pennsylvania from 1763 to 1783, Inclusive.”

“He says it was a joyous occasion,” Swauger said. “It was practically the only time that family and friends could gather together and celebrate without any work being expected of them in return.”

Oliver Miller volunteer Dale Main described one aspect of the celebration, the “run for the bottle,” as it would have pertained to the Miller-Wallace wedding:

“As the folks from Cross Creek are walking out here, as they get closer and closer, they know that there’s a bottle of whiskey waiting for them at the end. So one of the guys kind of sneaks ahead a little way and tries to get a little lead, and everybody kind of gets up behind him.

“After they get about a mile away, then they kind of start to break into a run,” he continued. “They’re jumping over logs and giving each other a hip, trying to get an advantage to get here first.”

Two groups then re-created the run: youngsters racing toward a bottle of lemonade, and the Cross Creek contingent sprinting for the real thing.

Spirits were often made for wedding presents, according to volunteer Barbara Bockrath of Bethel Park, who was stationed inside the homestead’s stone farmhouse to explain 18th-century gifts.

“No stores, so when people decided to give the young couple a gift, it was items from their own homes,” she said. “Somebody thought a great idea would be a cone of white sugar, and that is a very expensive wedding present. Can’t come by that easily.”

Martie Main, Dale’s wife, showed examples of the era’s wedding cakes in an adjoining room. The groom’s cake would be dark in color, made from brandy, molasses, dark fruits and almonds.

“The fruits and nuts are symbolic of fertility, that they’re hoping they will have a huge family. They did have 10,” she said about the children of William and Mary Wallace, “so that’s a pretty good size.”

And what about the bride’s cake?

“They would have spent some money for some white flour and some white sugar for that. You weren’t able to grow wheat out here for a while, because wheat needs a cleared field.”

The Oliver Miller Homestead is on the property that was owned and occupied by five generations of the Miller family, from 1772 until Allegheny County acquired the land by eminent domain in 1927. The all-volunteer Oliver Miller Homestead Associates formed in 1973 to maintain the property, preserve its history and present a variety of programs depicting life in 18th-century Western Pennsylvania.