You are the owner of this article.
Edit Article Add New Article
Welcome, Guest
News
Sports
Life & Culture
Events Calendar
Lottery Results
Fish Fry Map
Weather
Classifieds
e-Edition
South Hills Living
Get Our Newsletter
Get the Almanac
Advertise With Us
Submit Content to The Almanac
Contact Us
About Us
1 of 11 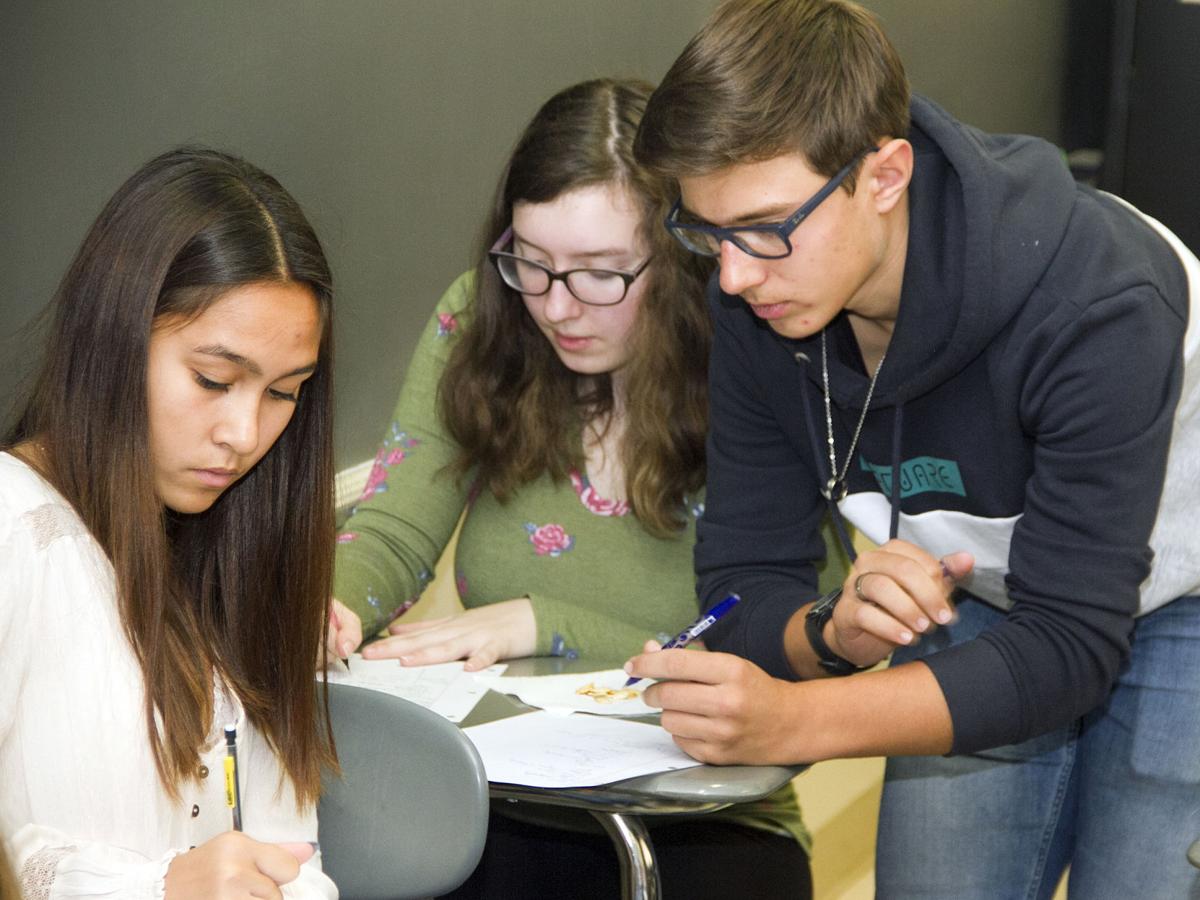 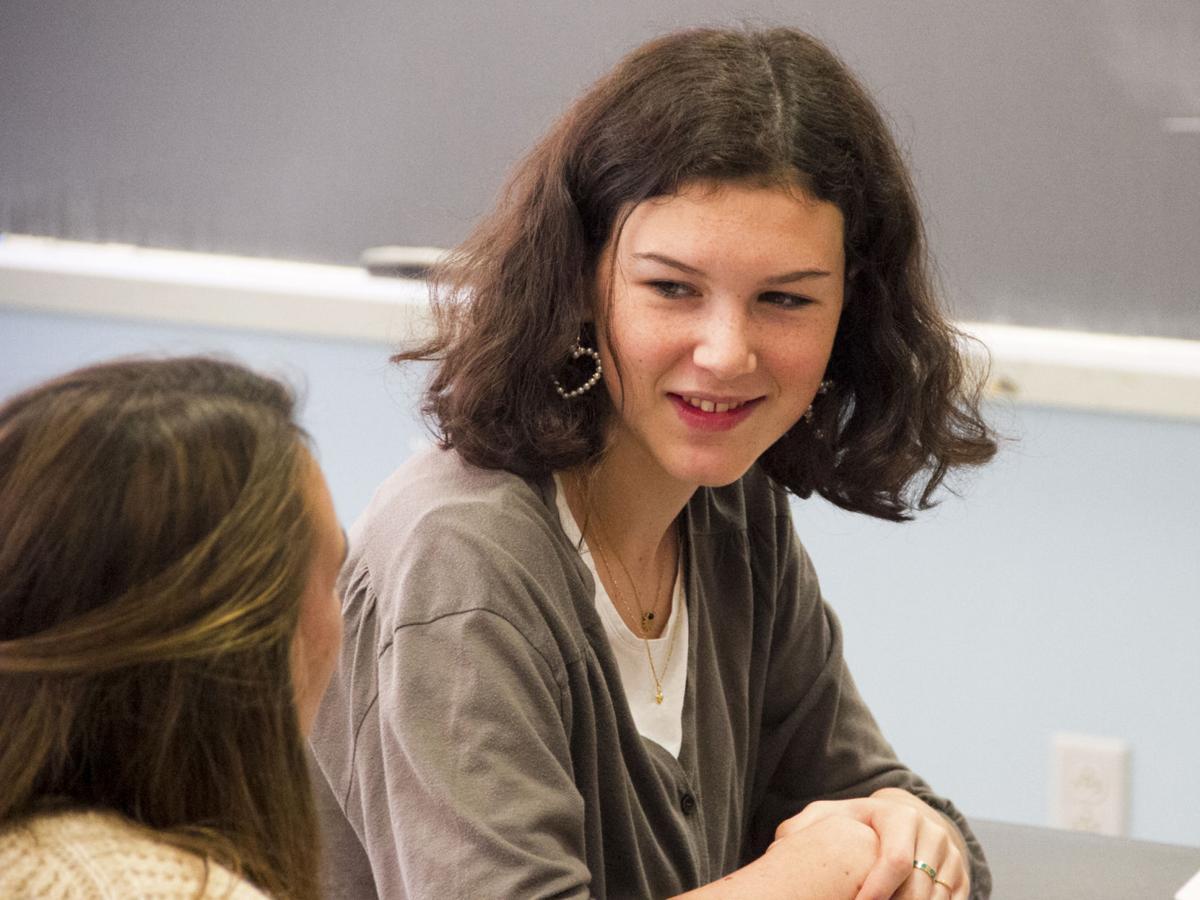 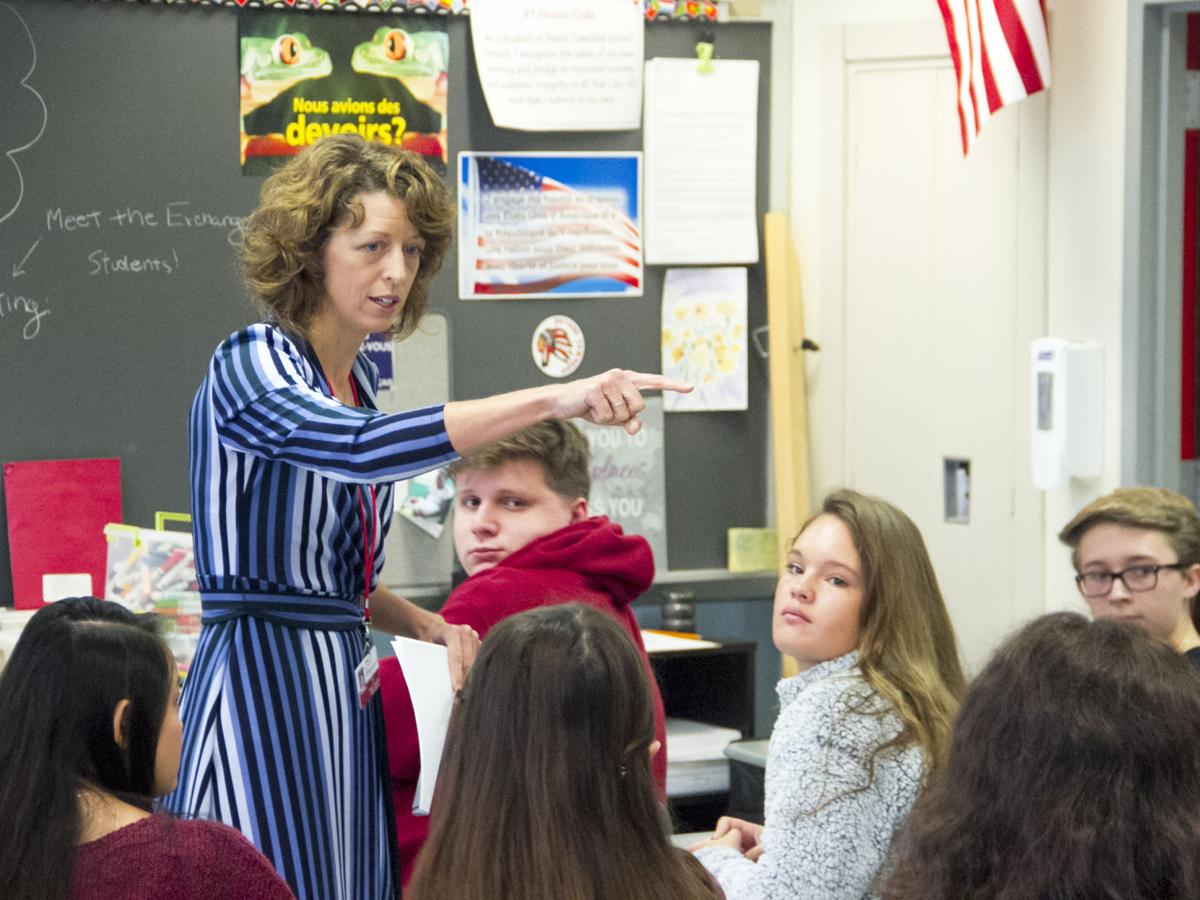 Teacher Michelle Chenevert divides her class into groups of students to speak with visiting students from France. 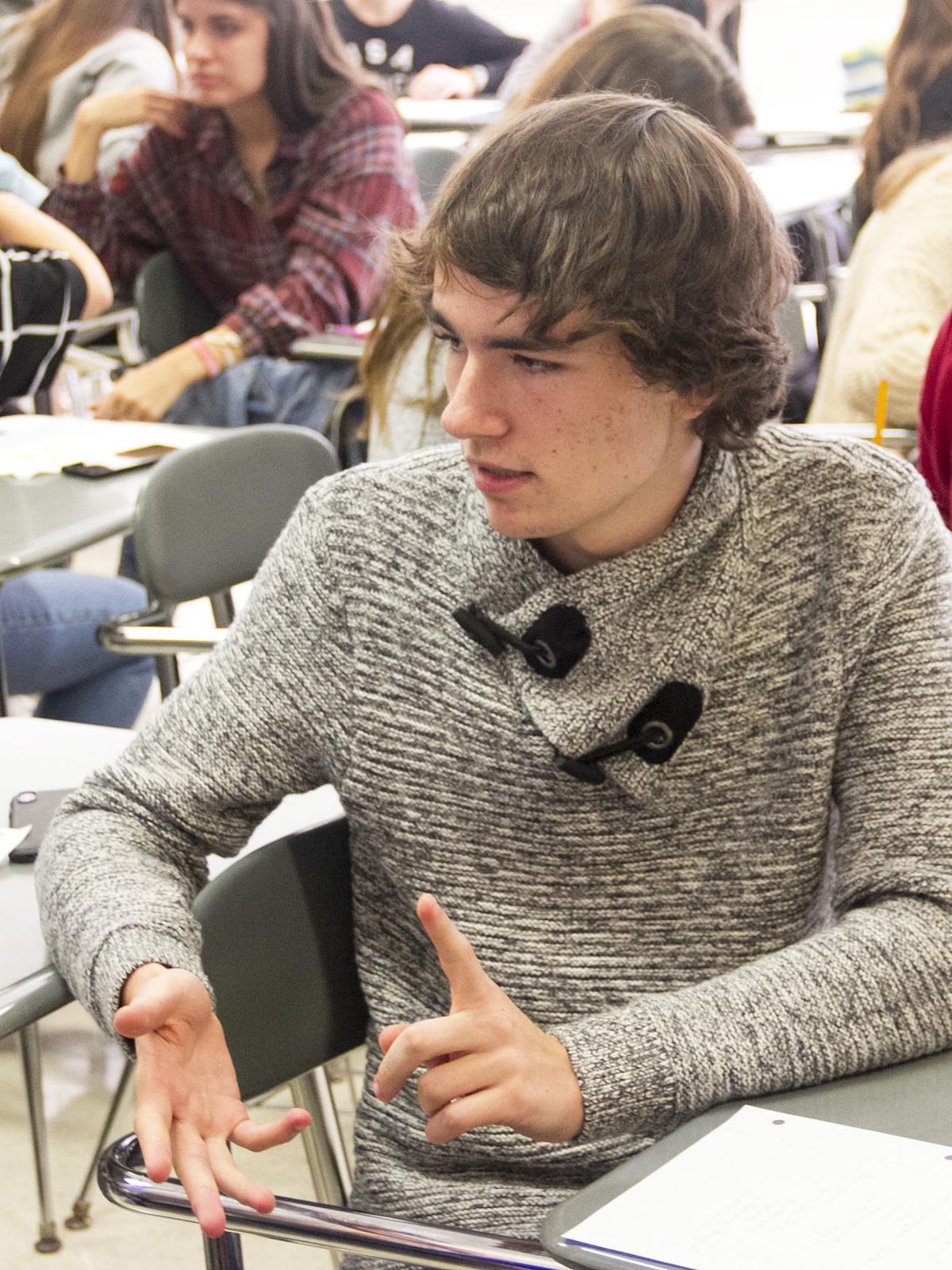 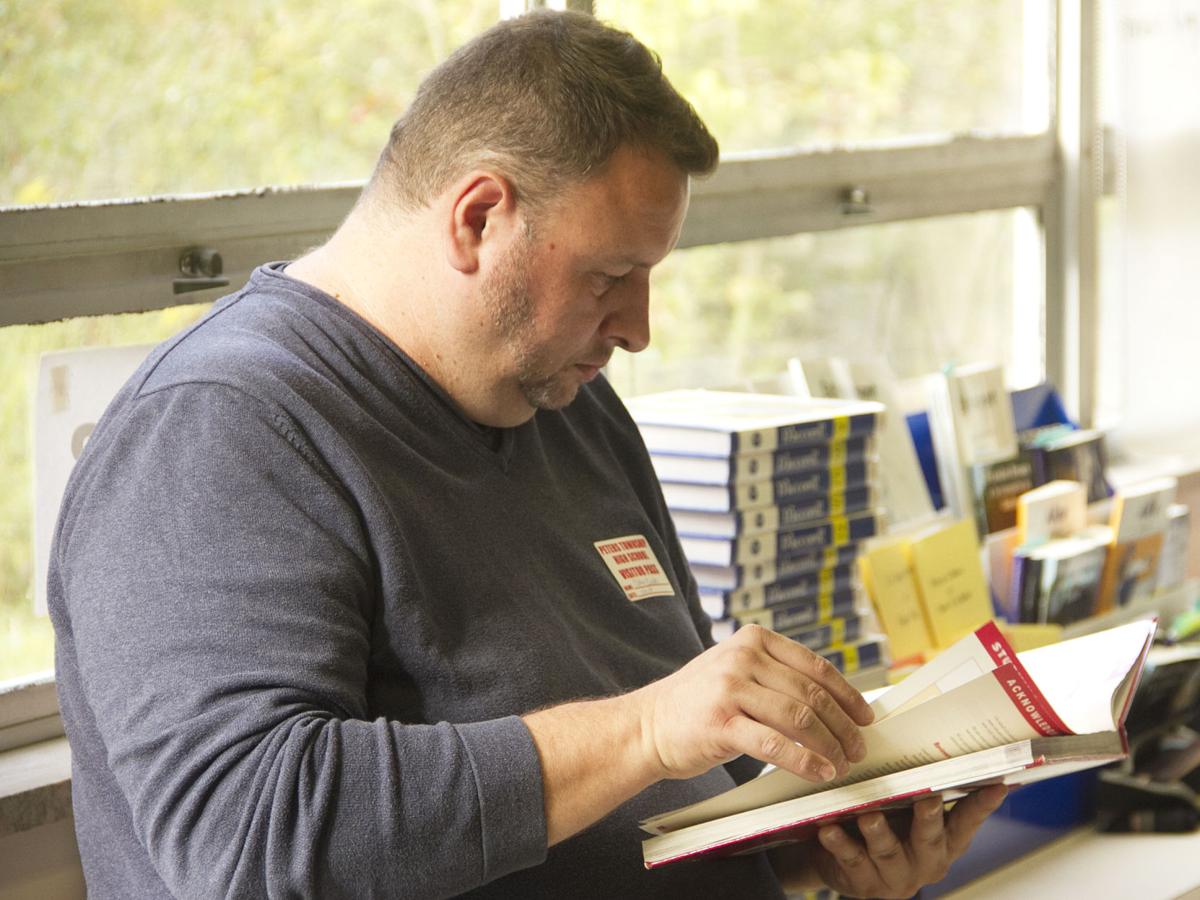 Cédric Civade takes a look through an American textbook. 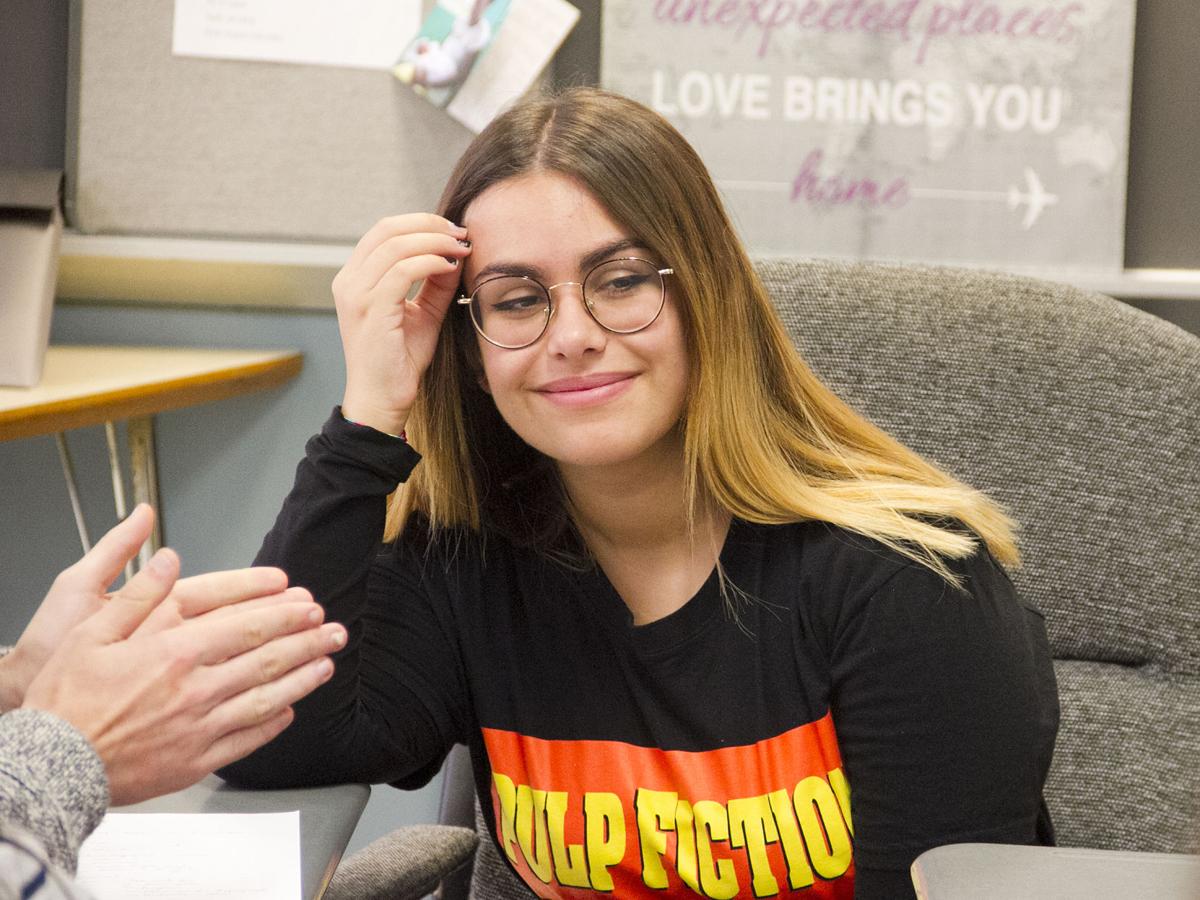 Lucie Dos Santos Rodrigues listens during a discussion about the French language. 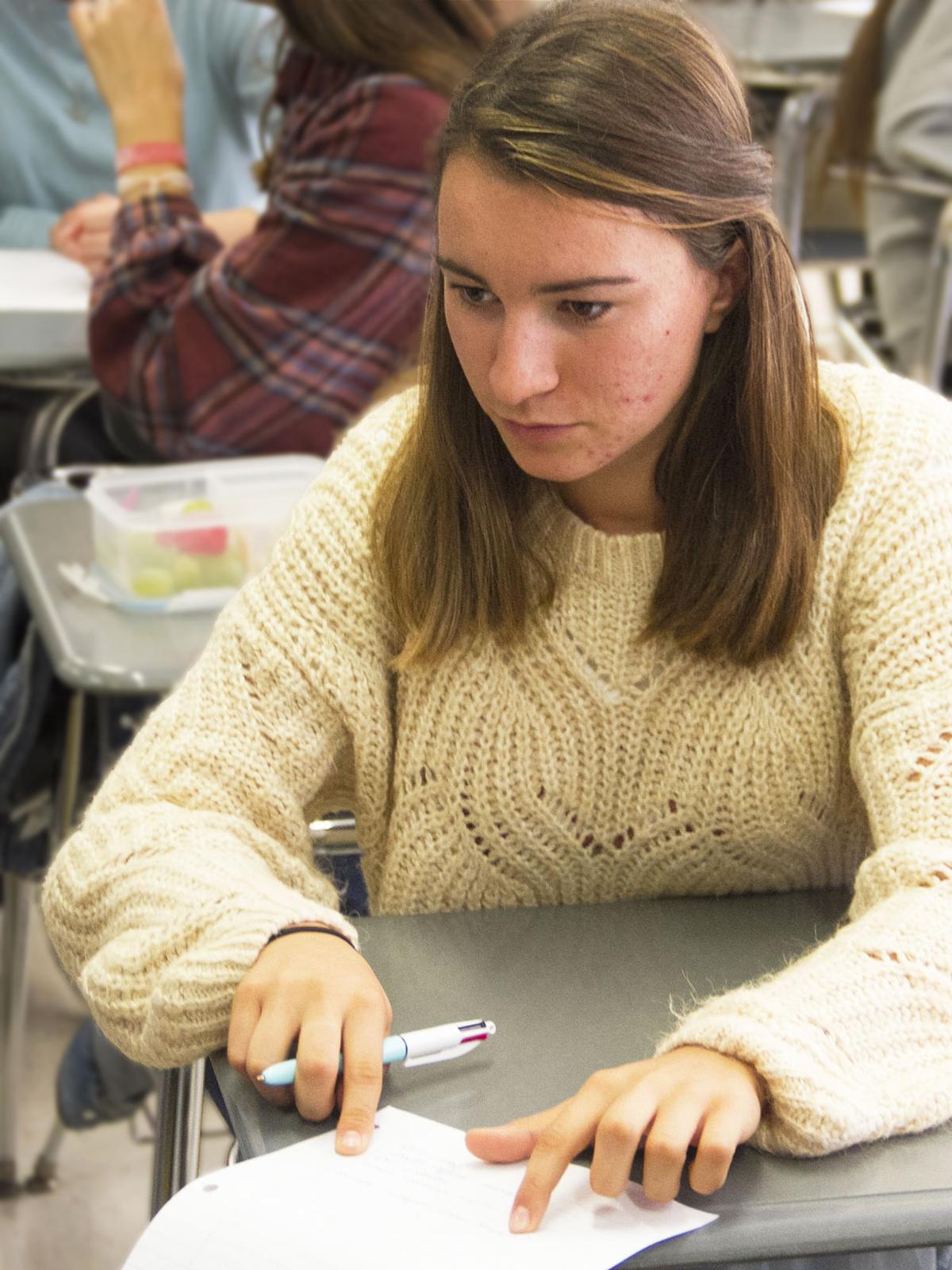 Iluela Neraud-Perochain points out an example about how the French language works. 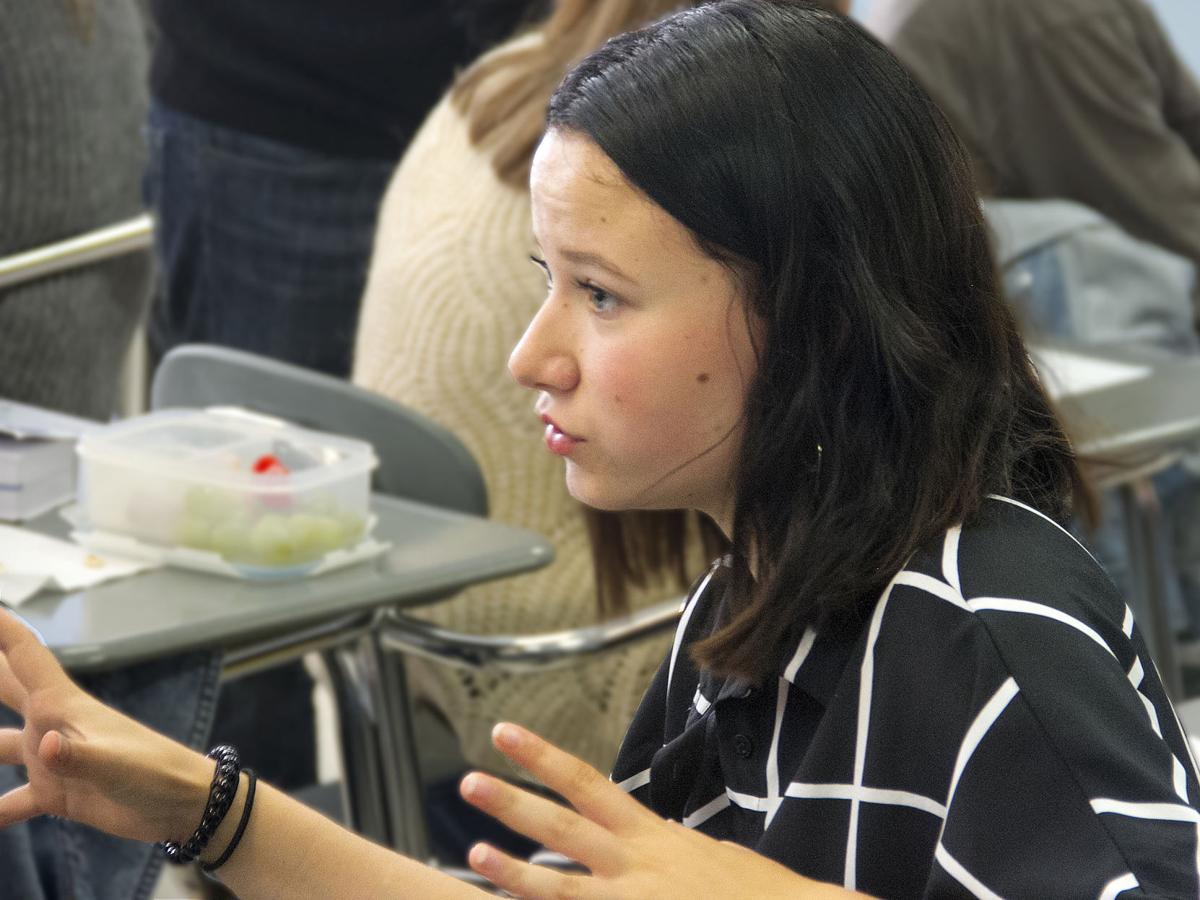 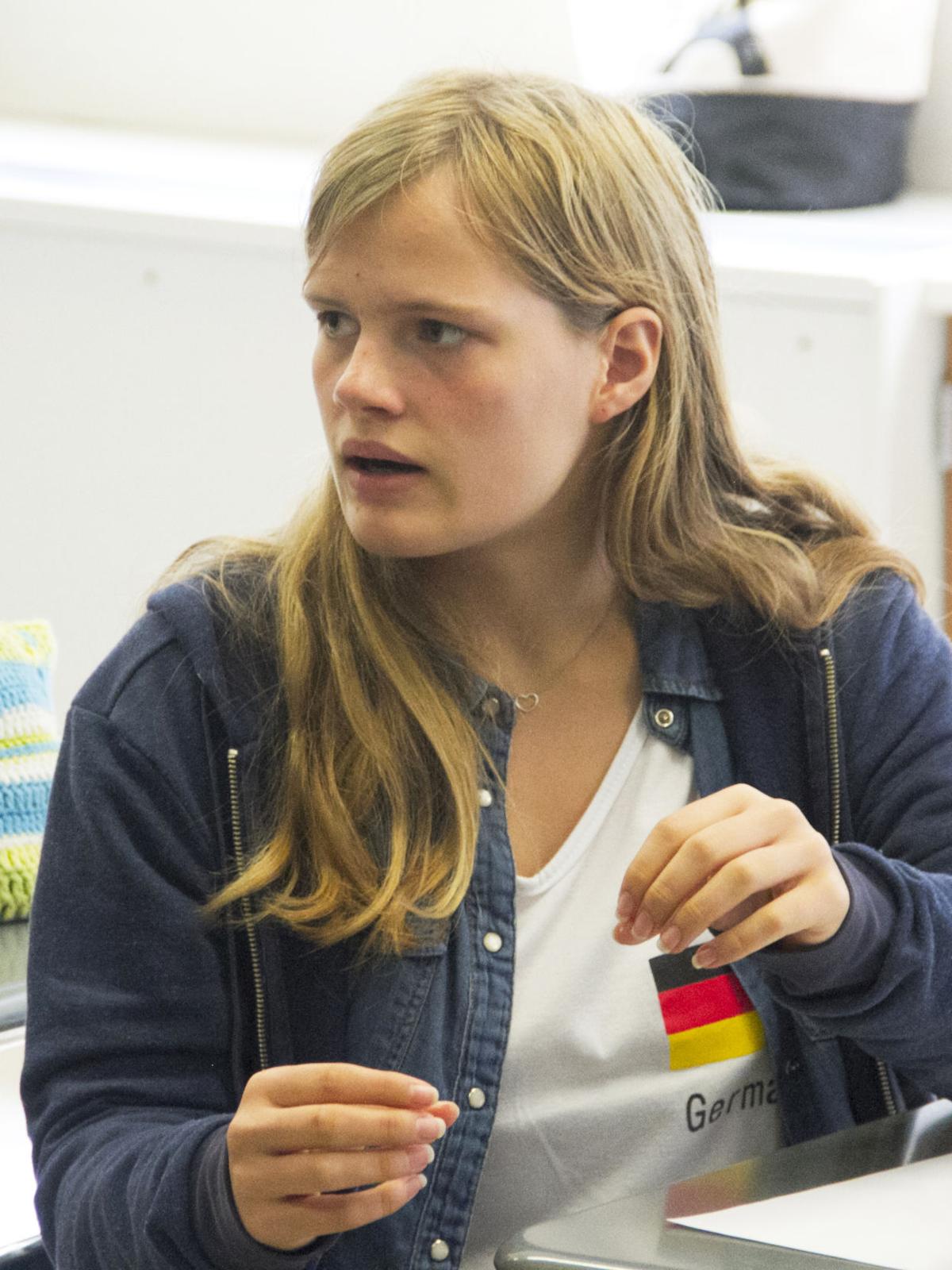 Eloïse Larroque participates in a discussion about the French language. 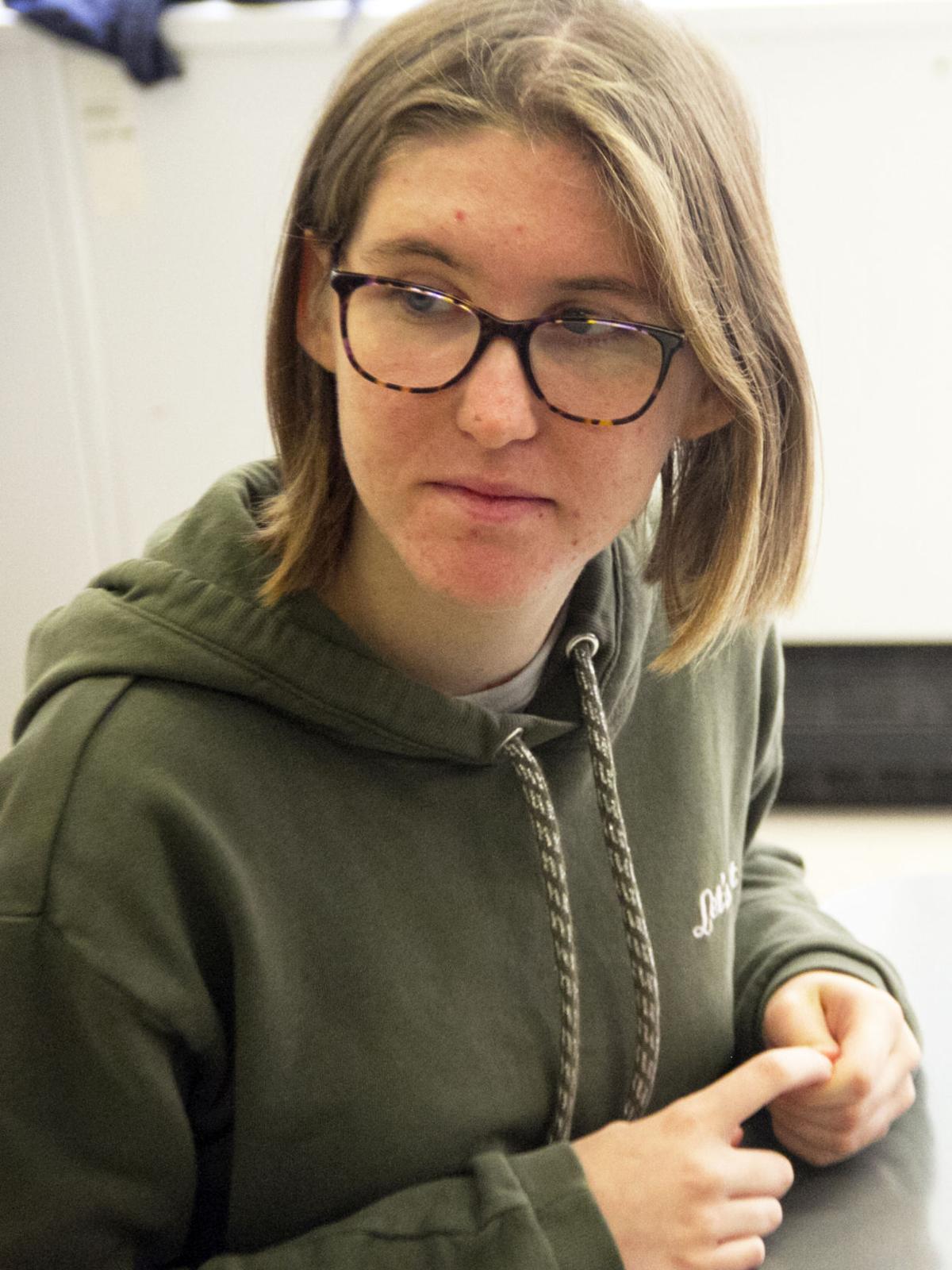 Léna Richer listens to questions about the French language. 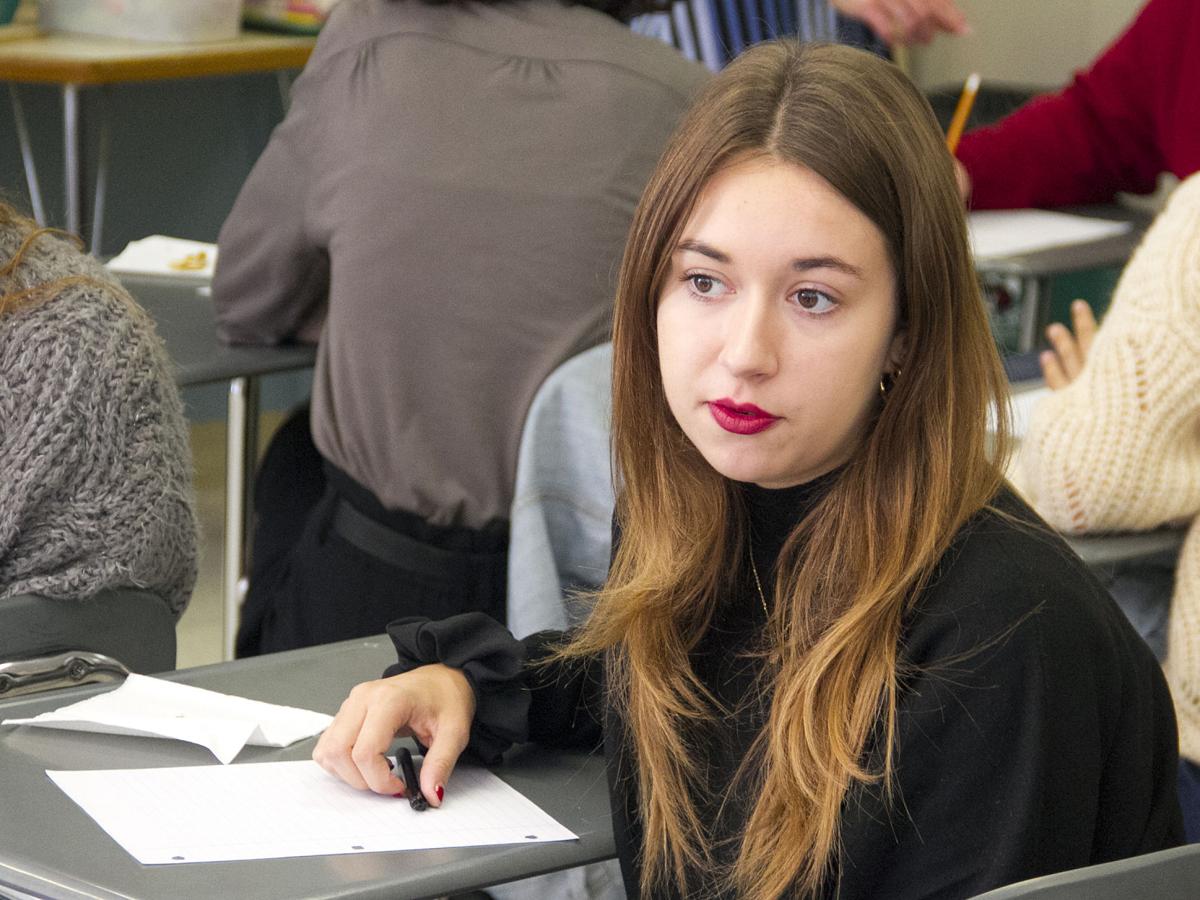 Emma Morisset is ready to share information about the French language.

Teacher Michelle Chenevert divides her class into groups of students to speak with visiting students from France.

Cédric Civade takes a look through an American textbook.

Lucie Dos Santos Rodrigues listens during a discussion about the French language.

Iluela Neraud-Perochain points out an example about how the French language works.

Eloïse Larroque participates in a discussion about the French language.

Léna Richer listens to questions about the French language.

Emma Morisset is ready to share information about the French language.

In the age of Snapchat and Skype, you might not expect recipients of good, old-fashioned letters to be all that thrilled, especially if they’re American teenagers.

But consider what happened when certain pieces of mail arrived from across the Atlantic for some of Michelle Chenevert’s students.

“It was adorable,” the Peters Township High School French teacher recalled. “It was honestly like Christmas morning here. They were so excited.”

The correspondences were from their counterparts at Lycée Général et Technologique Cordouan – near the oceanside town of Royan, France – who had written in advance of what would become a mid- to late October visit to Peters.

Sure, the students used various forms of electronic communication and social media to get to know one another. But there was just something about the exchange of handwritten correspondence.

“We wanted them to realize that the writing was different, the size of the paper was different,” Cédric Civade explained. “They were really surprised when they got the letters.”

He and Florian Darmagnac, English teachers at the lycée – that’s the French equivalent of high school – accompanied 20 students on a two-week trip that included a jaunt to Washington, D.C.

The students were eager to visit the United States, Darmagnac said, but they may not have had specific expectations.

“Maybe a bit of stereotypes, like big cars, big malls, everything of a size. And if that’s what they wanted, I must say they probably weren’t disappointed, because everything is huge,” he said. “There’s also a reputation that American people would be friendly and welcoming and warm, and that’s also something that came true.”

The guests, who stayed at the homes of advanced Peters Township French students and their families, had plenty of exposure to the suburban American teen’s way of life, from attending a high school football game and Phantom Fright Night at Kennywood Park to having a picnic and going shopping at South Hills Village.

For the visiting students, the main objective was learning more about speaking English, and the immersion aspect proved to be successful.

“We had students who were very shy, and we’ve seen complete transformation,” Darmagnac reported. “They come to us and they start speaking in English, which would never happen in a French hallway.”

The American students also took the opportunity to hone their skills in speaking French.

“They’re taking risks,” Chenevert said. “Instead of being like, ‘Well, Madame, how do I say it,’ they’ll just jump in and try to communicate.”

The partnership between Peters Township and Lycée Cordouan began about two years ago, when Chenevert learned about the opportunity through an email she received from the American Association of Teachers of French. She contacted Civade, and a lengthy series of preparations began.

“We have similar programs with Germany and Spain in our school. But there was nothing with the U.S., and we wanted to put that in place,” Civade said. “Even before we met Michelle, it took two years to find someone who was serious.”

The trip finally took place with the French group flying into New York City and traveling by bus to Pittsburgh. The Peters Township contingent met the visitors for breakfast at the David L. Lawrence Convention Center, with food and coffee supplied by Einstein Bros. Bagels.

“Even that was a cultural experience, because they do have bagels in France, but only plain ones with cream cheese, and it’s not something they eat every day,” Chenevert explained. “Pumpkin-spiced bagel with honey-almond cream cheese: They definitely never had that before.”

And so it continued to go for the students throughout their visit.

“When you ask them, ‘What has been your favorite part so far on the trip,’ you get like 20 different answers,” Civade said. “Some are going to notice things like the Statue of Liberty because it was a dream, and others, the 9/11 Memorial. They were very touched. And for others, it’s meeting their pen pals.”

As for his students learning the intricacies of English:

“Trust us. It’s way easier than French,” he said. “Every object has a gender. So you have to choose if a chair is male or female. And when you realize that a chair is female, you have a hard time understanding why an armchair is male.”

To which Darmagnac chimed in: “A table is female, but a desk is going to be male.”

And Chenevert’s observation: “But only a grownup’s desk. A student’s desk will be female.”

Remember that next time you’re in Royan.