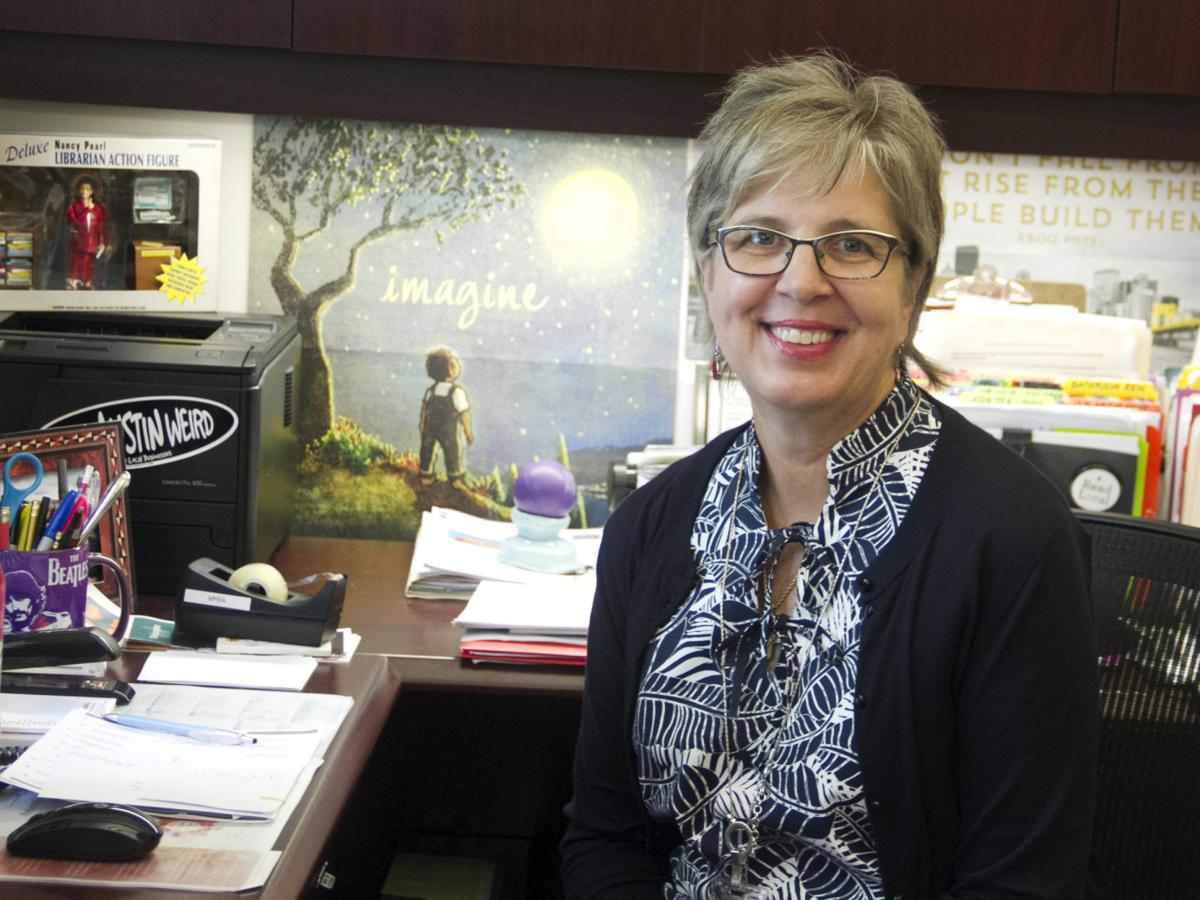 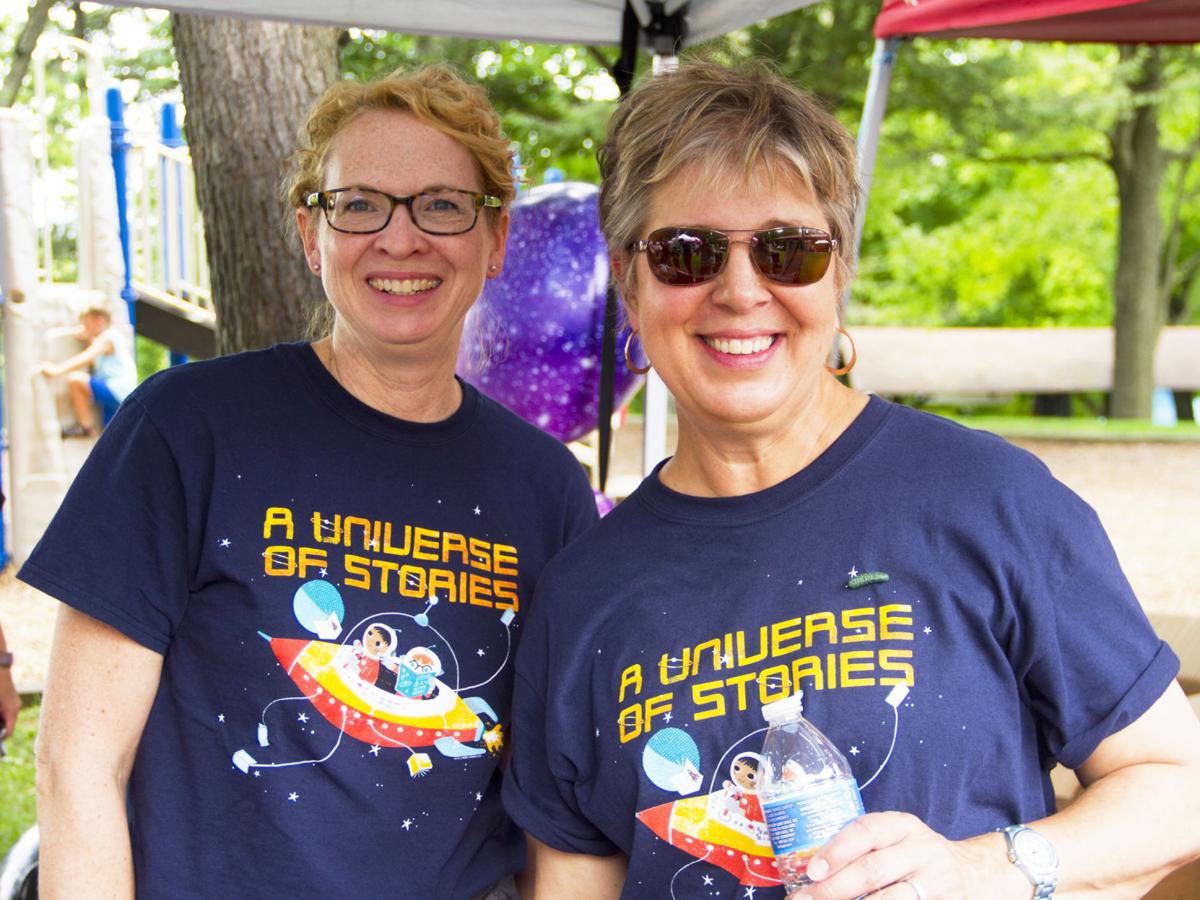 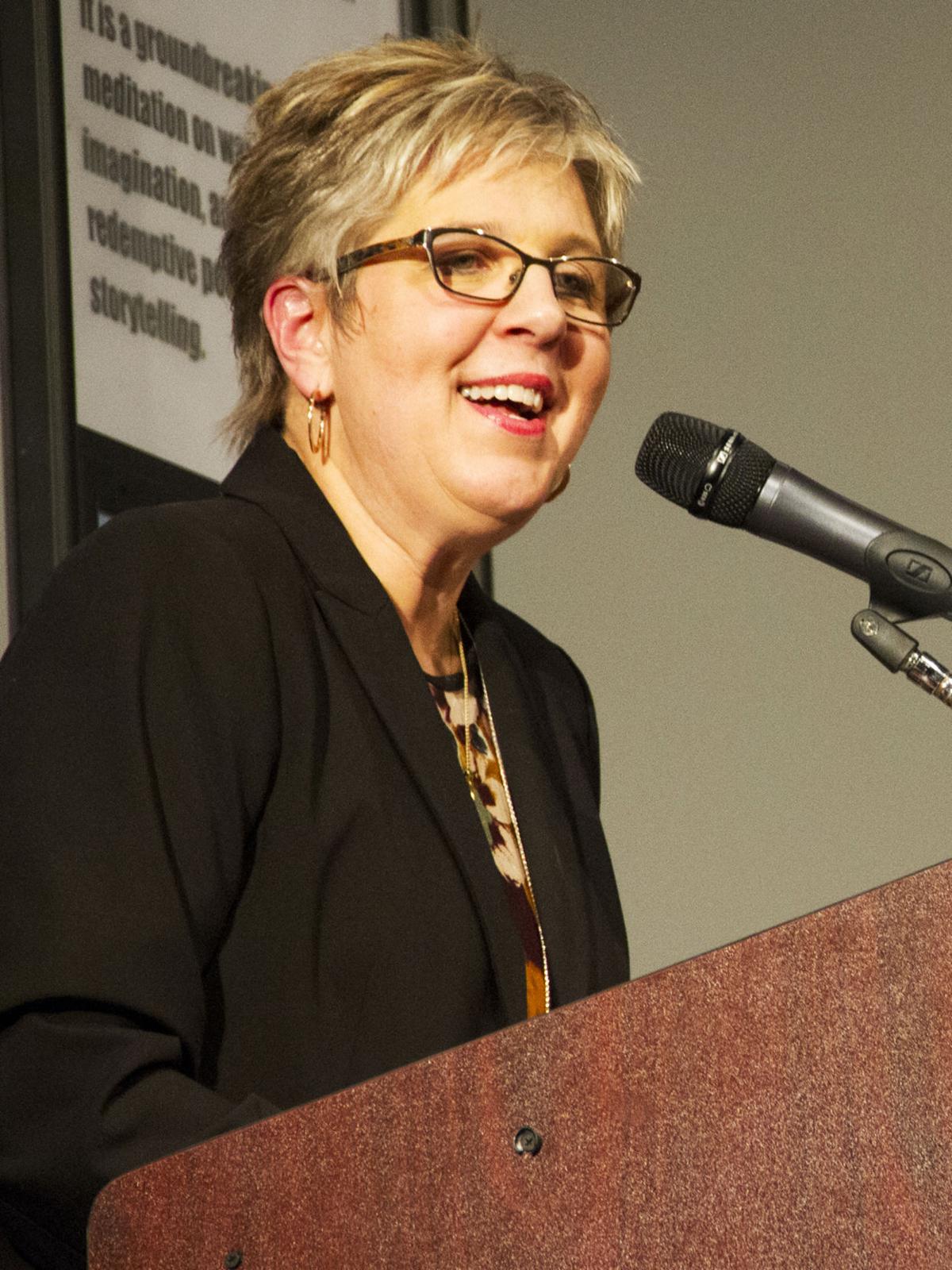 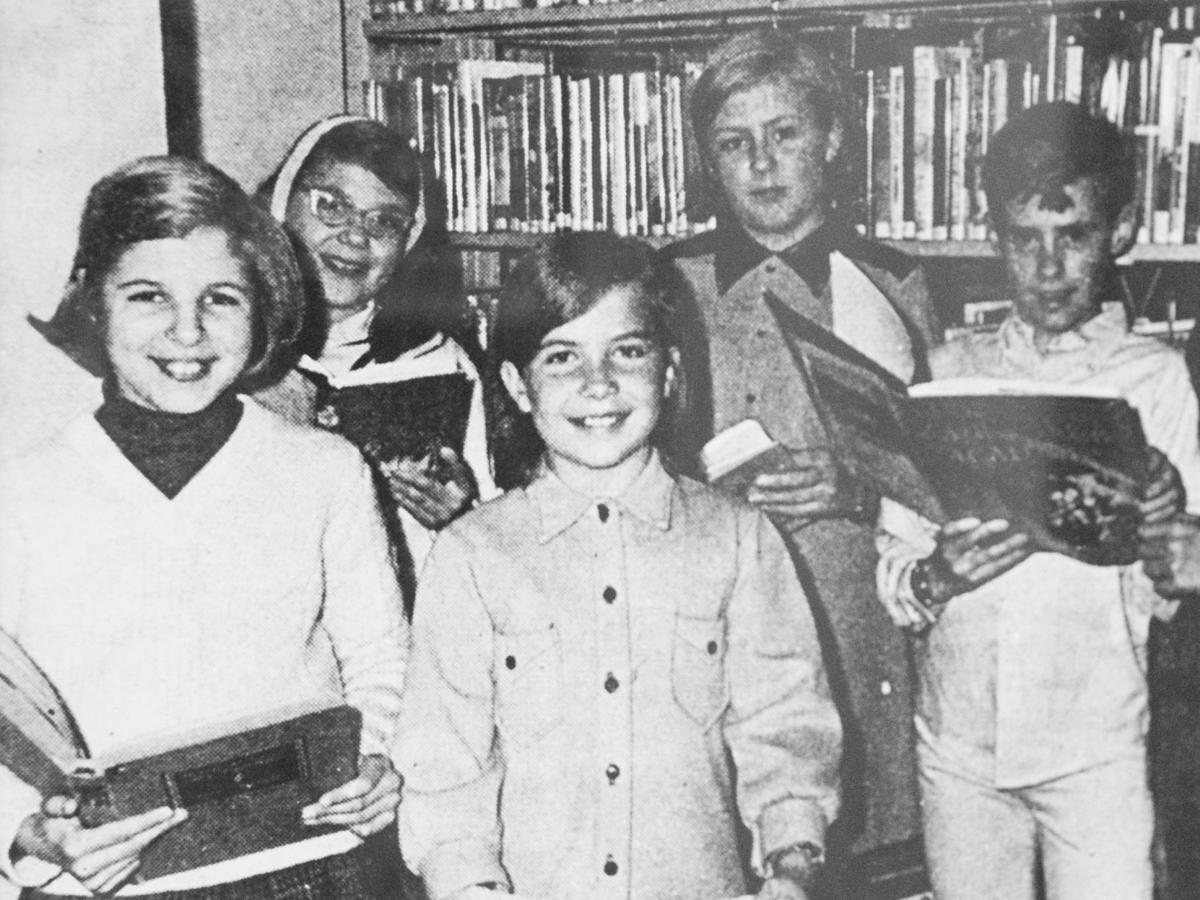 Myra Rusinko, far left, is pictured with other young Peters Township Public Library volunteers in a 1968 photograph that ran in a local newspaper. 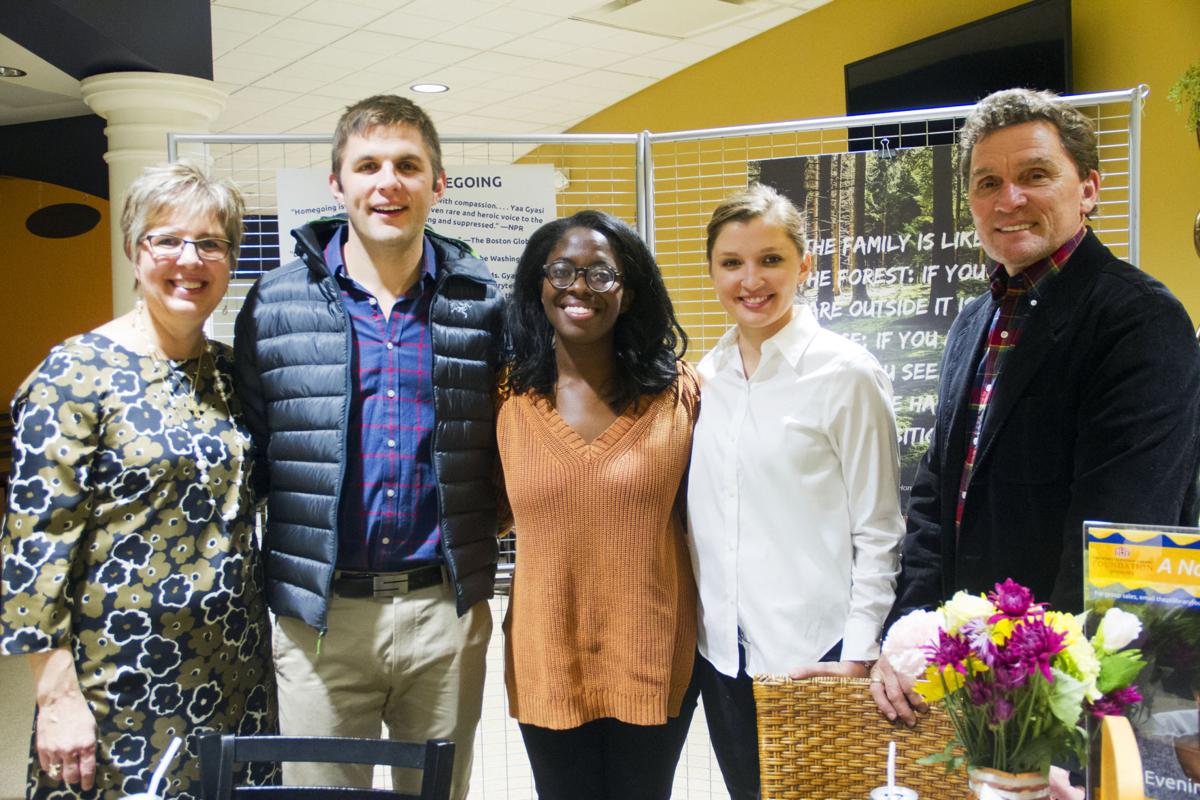 Members of the Oleynik family visit with author Yaa Gyasi, center, during the inaugural Novel November event in 2017. From left are Myra, Gregory, Alexandra and John.

Myra Rusinko, far left, is pictured with other young Peters Township Public Library volunteers in a 1968 photograph that ran in a local newspaper.

Members of the Oleynik family visit with author Yaa Gyasi, center, during the inaugural Novel November event in 2017. From left are Myra, Gregory, Alexandra and John.

Everyone has his or her favorite sayings, and there’s one that’s high on Myra Oleynik’s list.

The statement pretty much sums up her experience since 2015 as Peters Township Public Library director.

“It sounds maybe kind of corny,” she said, “but it is the truth. Really, everything that we were able to accomplish in these five years had to do with teamwork.”

From implementing a long list of new programs and services to figuring out how to cope with COVID-19’s effect on the library, Oleynik credits members of her staff with making her tenure a success story. And by extension, she knows the library will be in good hands when she retires as of July 20.

“I just felt like it was time,” she said about the career move. “This year, itself, felt like two years packed in, from March until now.”

Actually, she had planned to announce her retirement date much earlier in 2020. Then came the temporary closure of the library as a precaution against the spread of COVID-19.

“We worked really hard to keep it all up and running as best we could. And it was never really a good time, in my mind, to bring it up,” Oleynik said with regard to an announcement, “because I didn’t want it to appear as if I were jumping ship.”

From mid-March to late June, when the library reopened physically with multiple safety measures in place, staff members came up with ideas to continue to serve the public. An in-service program in January, about the importance of developing a “growth” mindset, helped prepare the staff for dealing with the unprecedented situation.

“This whole pandemic is about having a ‘growth’ mindset,” Oleynik said. “One minute, you try something, and it shifts and changes under your feet. So it’s OK to say, ‘That didn’t really work right. Let’s try it this way.’”

She brought that type of attitude when she succeeded Pier Lee, who had served as library director for four decades.

“I actually thought, maybe two or three years, just to kind of help with the transition,” Oleynik said. “One project led to another. Then when this year rolled around, I knew it would be five years for me in July.”

That’s when she joined the library staff, the month after her retirement – yes, this is her second time around – from Peters Township School District after 36 years. She took over as director in December 2015, with Lee’s encouragement.

“When she kind of floated the idea, I said, ‘I’ve been in education all my life. I really don’t know all that much about public libraries,’” Oleynik said.

Lee, however, had faith in her successor.

Oleynik served as library media specialist for Peters Township’s elementary students since 1993, working at Bower Hill Elementary since the school’s opening in 1999.

A lifelong township resident, Miss Rusinko, as her name then was, started with the school district in 1979 as a third-grade teacher after earning her bachelor’s degree in elementary education from Grove City College. While teaching, she worked on her master’s in library and information science at University of Pittsburgh, taking a bus to and from Oakland for classes.

“I think I have to give credit to my dad, because he loved books,” Oleynik said of what piqued her interest in libraries. “He said, ‘Something is learned every time a book is opened.’ And I grew up with books everywhere.”

John Rusinko passed away in October at age 91, and now that Myra is retired, she plans to spend more time with her mother, Olga. Of course, that also applies to husband John – he also is a retired teacher – and their children, John Nicholas, Alexandra and Gregory Oleynik.

“It’s been a lot of years of full-time work for me,” Myra said. “I want to relax and be on the patio without my phone, and do some more reading. During this pandemic, I read two books. That’s it. I couldn’t focus. I was so focused on work. There’s really no downtime when you’re working behind the scenes.”

She doesn’t appear to have taken much downtime since becoming library director.

One of her first initiatives was to pursue “gold” certification in the PA Forward Star Program, a process that involves promoting various types of literacies among patrons: basic, information, health, financial, and civic and social.

“We were the first library west of Altoona to get that,” she said. “I was so excited, because I felt like it was really bringing the community’s attention to the work that we can do. We’re more than books.”

And that’s evident by the wide variety of programs offered by the library. Oleynik instituted an event called Preschoolpalooza, providing parents with opportunities to meet and speak with representatives of preschools.

For folks on other parts of the age spectrum, there are numerous book clubs, discussion groups and conversation circles, the latter involving people speaking with one another in Spanish, German or French to hone their language skills.

Early in Oleynik’s tenure as director came the formation of the Peters Township Library Foundation, with the mission of building financial and volunteer support for the library. Of particular note have been the annual Novel November events organized by the foundation, featuring authors Yaa Gyasi in 2017, and Tim O’Brien and Anna Quindlen the following years.

Oleynik also acknowledges the administrative library board, of which she is a former member, for the considerable amount of support she has received.

And as an educator, she appreciates what she learned on the job.

“Your world really gets expanded at the library, because people of all ages, all walks of life, are coming in for different reasons,” she said. “I did love it. I really, really loved it. And I’m going to miss it.”