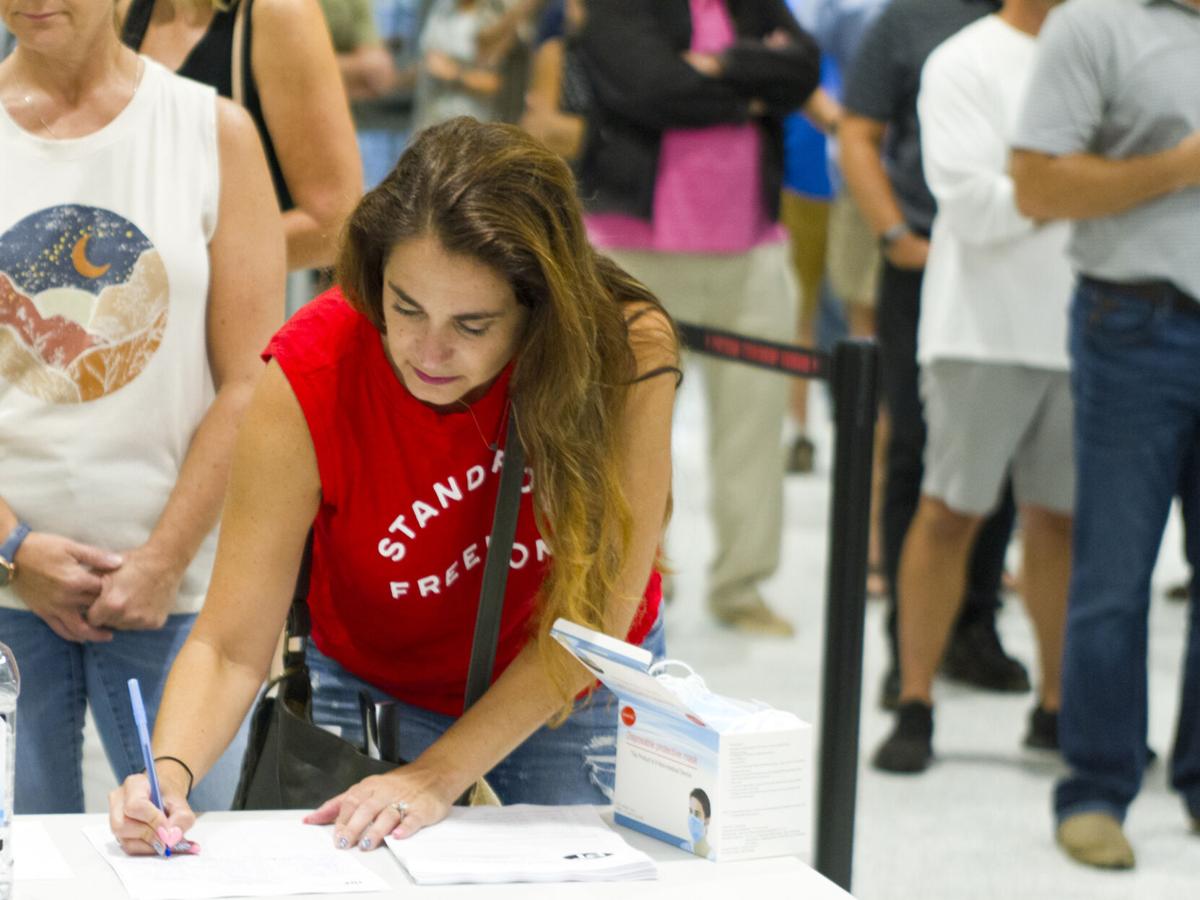 More than four dozen individuals signed up to speak for a maximum of five minutes per person during the public comment portion of Wednesday's special Peters Township School Board meeting. 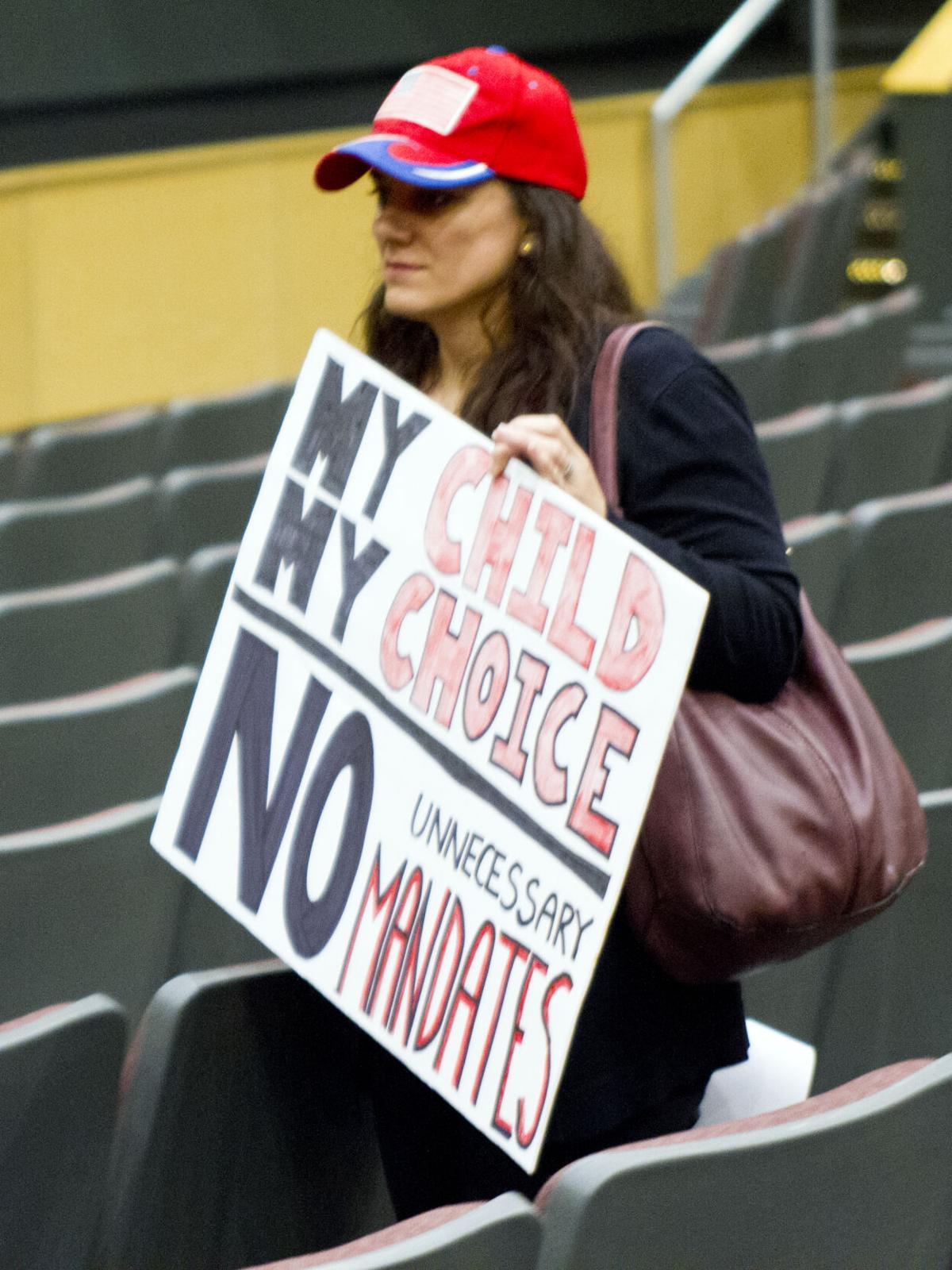 A woman carries a sign stating her position into the Peters Township High School auditoirum. 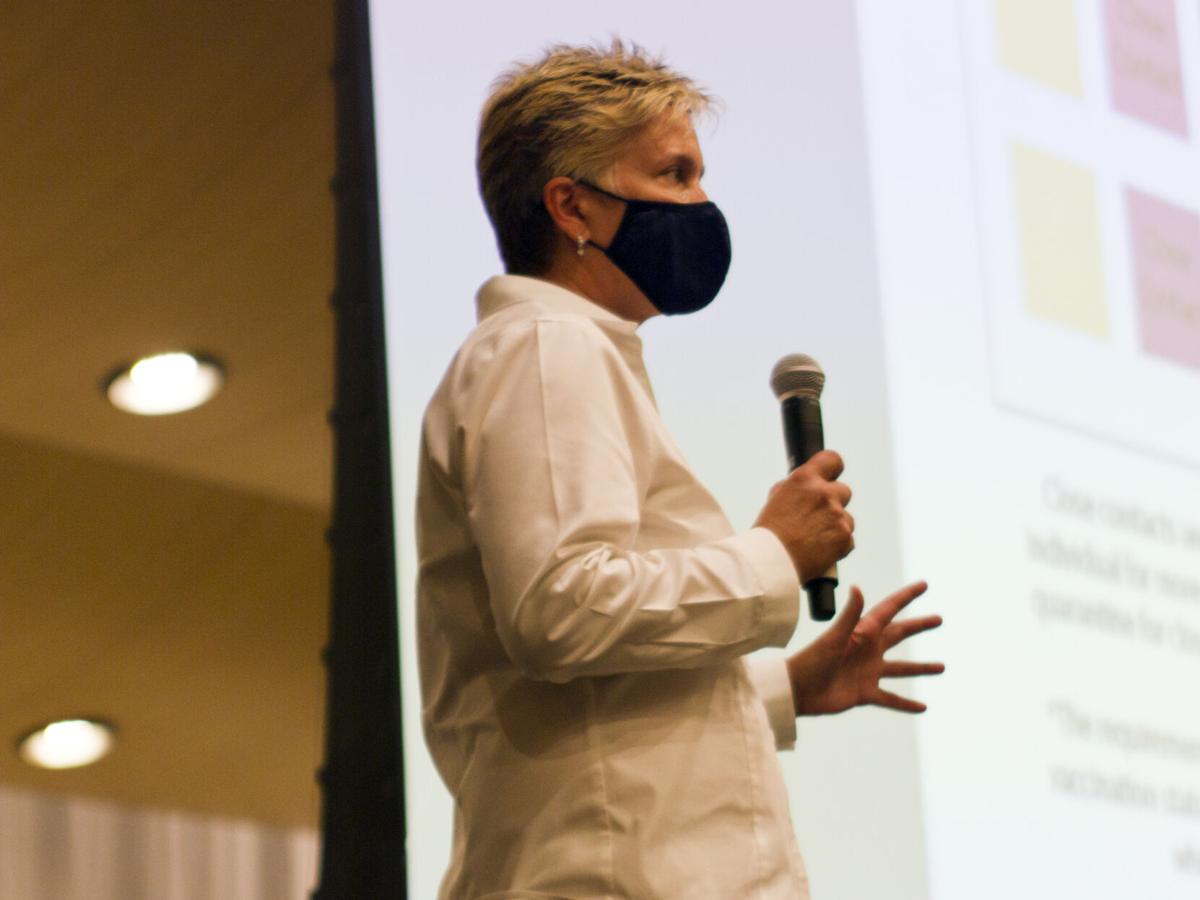 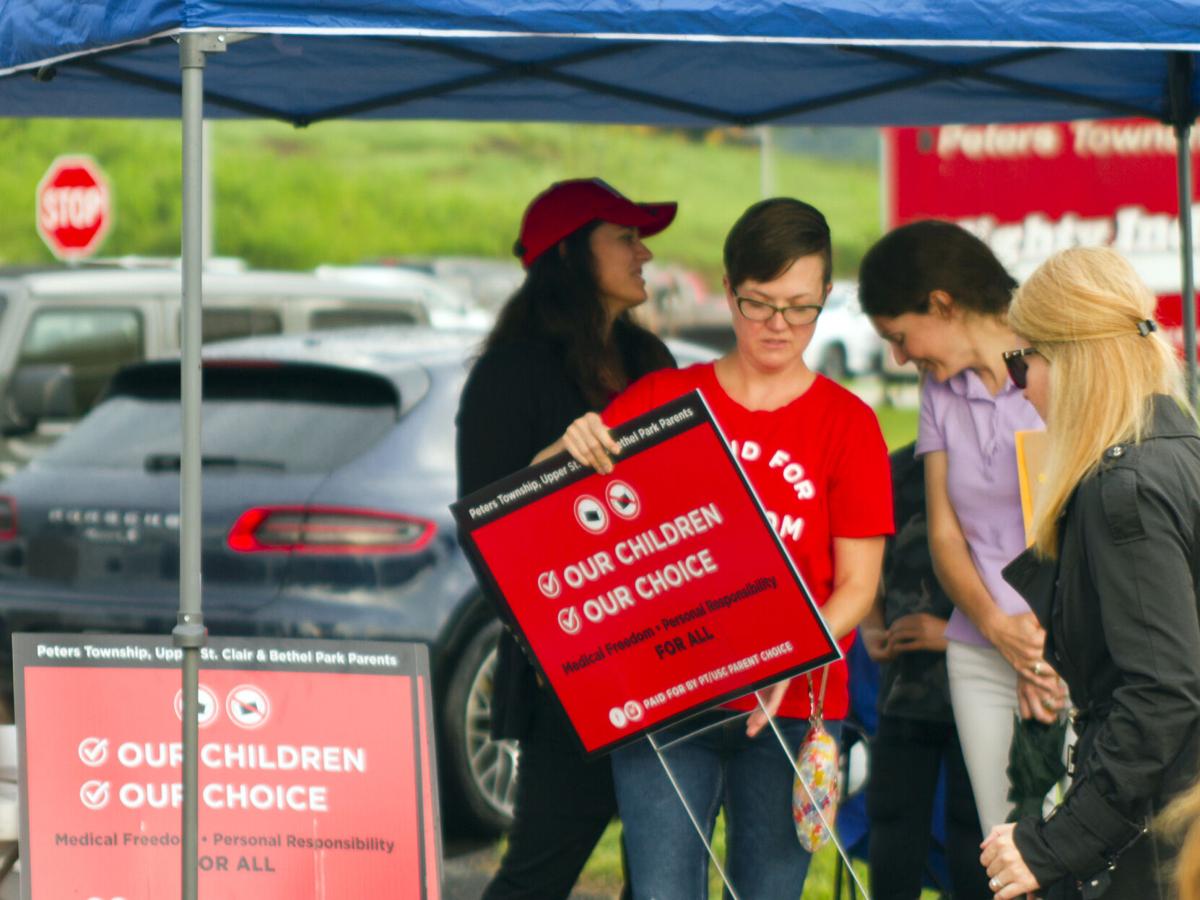 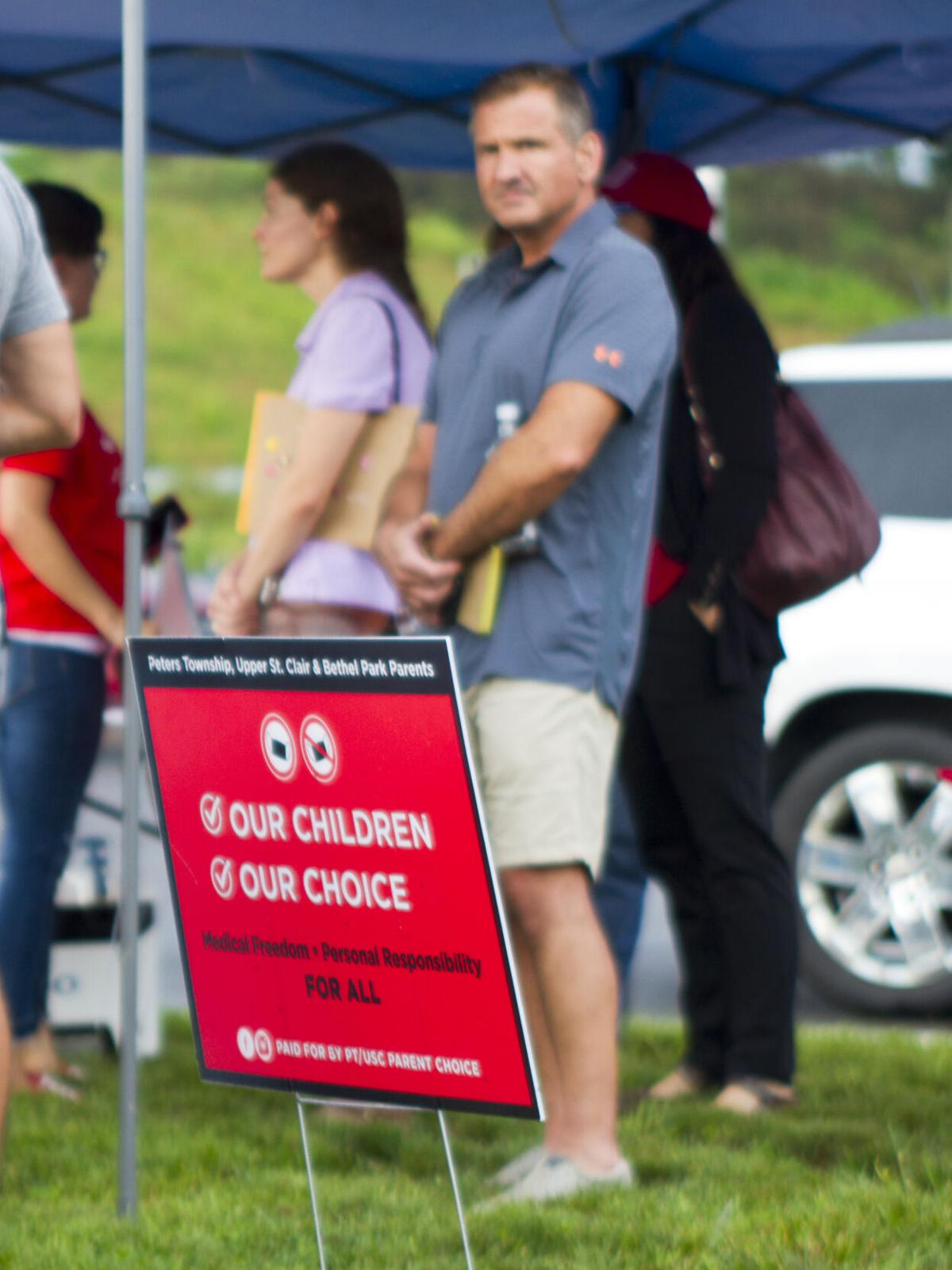 Signs posted Wednesday at Peters Township High School, and on certain lawns throughout the community, advocate for a pro-choice stance with regard to masking. 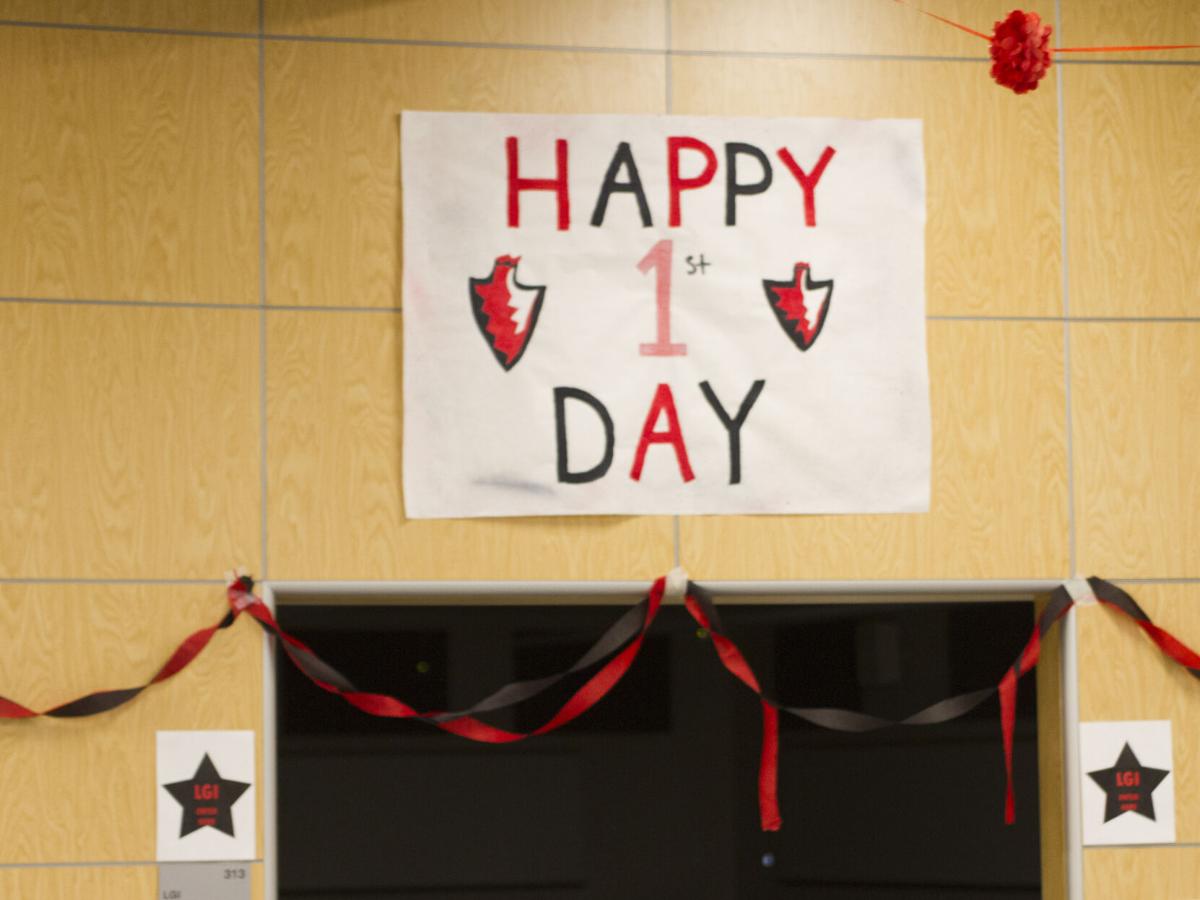 More than four dozen individuals signed up to speak for a maximum of five minutes per person during the public comment portion of Wednesday's special Peters Township School Board meeting.

A woman carries a sign stating her position into the Peters Township High School auditoirum.

Signs posted Wednesday at Peters Township High School, and on certain lawns throughout the community, advocate for a pro-choice stance with regard to masking.

During a special meeting Wednesday, Peters Township School Board voted 6-3 to uphold a universal masking requirement.

The action took place nearly five hours after the start of the meeting, following opportunities for audience members to speak. The meeting was held at the high school auditorium to accommodate all who wished to attend in person.

The vote ratifies the district’s health and safety plan, which includes provisions to “maintain universal masking inside district facilities, to be reviewed no later than the end of the first semester,” according to the meeting’s agenda.

The special meeting was put on the calendar following the board’s 5-4 vote at its Aug. 16 meeting to amend the district’s health and safety plan to include the mandate for face coverings as a protective measure against COVID-19. Anderson at that point voted against the measure.

Following that meeting, a lawsuit was filed against the board and several individuals contending a violation of state law because all who wished to attend were not accommodated.

“And so we scheduled this meeting immediately so that we could reconvene,” solicitor Jocelyn Kramer said Wednesday. “We have to have legal advertisement before we can hold the meeting, or we would have held it sooner.”

Prior to public comments, she spoke about the “back-door mandate that we’re operating under” by way of the Pennsylvania Department of Health, which “has the specific authority to direct the school district to participate in case investigation, to identify close contacts and to quarantine those close contacts.”

“They also have the ability to order schools to close,” she said.

She told audience members the department has issued a new definition of “close contact” with regard to individuals who have contracted COVID-19.

“It’s still within six feet for 15 minutes; you would be a close contact,” Kramer said. “But then they added a new layer. They said, if you are three to six feet, so at least three feet apart, and both people are masked, you don’t have to quarantine. That’s both people, though. So if one student is masked and the other student isn’t masked, both kids have to quarantine.

“We have to operate under that definition.”

She further paraphrased Department of Health requirements as they apply to the school district:

“If you don’t require everyone to wear masks, you’re going to be subject to mass quarantine, mass disruption. We have the authority and will close you. And oh, by the way, we’ll disrupt your sports seasons. We’ll disrupt your co-curriculars.”

Kramer also said if any school official fails to comply, the department has “the ability to impose professional discipline against them, as well as criminal penalties.”

“But behind the scenes, we were working seven days a week, on call day and night, to get that contact tracing so we could keep our schools open,” she said. “Unfortunately, we had to consider over 1,800 students close contacts and keep them out of school.”

The new requirements would be likely to result in fewer academic days lost, as long as students and others in district buildings wear masks.

“In most cases,” French said, “it would just be the infected person who would have to isolate.”