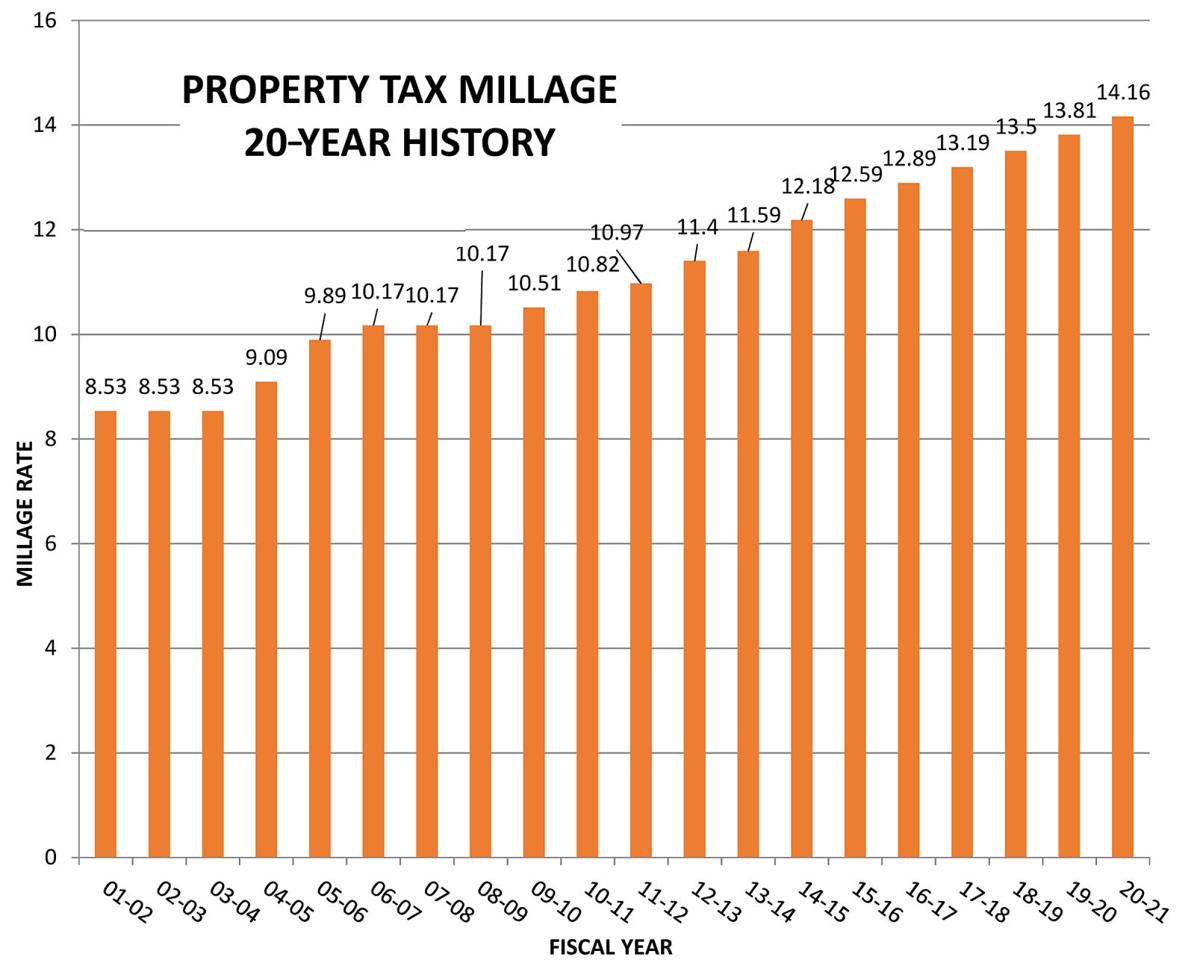 Peters Township School District notes that increased housing starts locally supported stable real estate tax rates in the early 2000s. Rates prior to 2017 are adjusted to reflect Washington County’s change to taxation based on 100% of assessed property value instead of 25%. 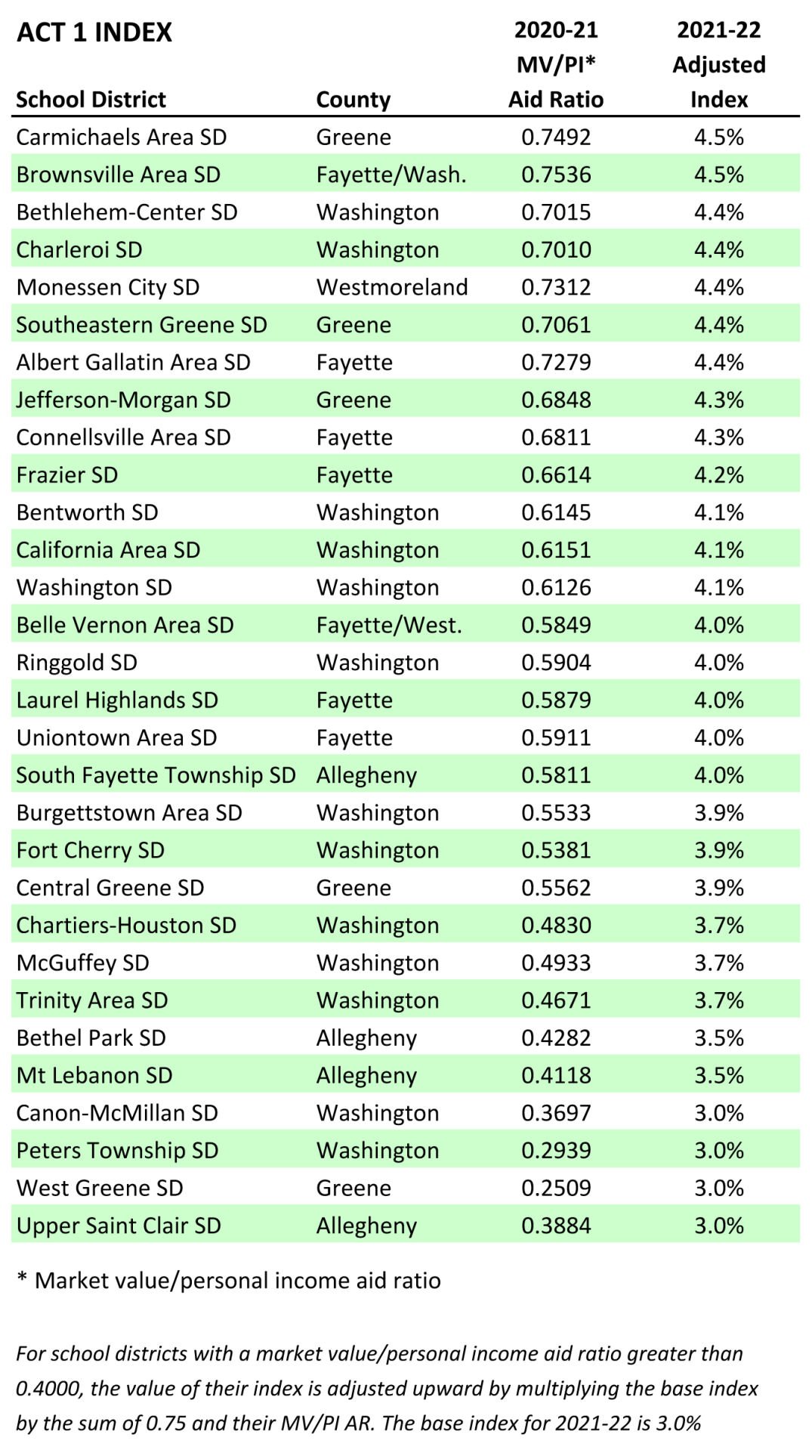 Peters Township School District notes that increased housing starts locally supported stable real estate tax rates in the early 2000s. Rates prior to 2017 are adjusted to reflect Washington County’s change to taxation based on 100% of assessed property value instead of 25%.

The school board Tuesday approved a resolution stipulating a real estate tax increase of no more than 3% for the coming fiscal year.

That figure corresponds with the district’s adjusted index under state Act 1 of 2006, which calls for a limit on annual tax increases based on statewide average weekly wages and the federal employment cost index for elementary and secondary schools.

Even if the real estate tax rises by the set maximum, to 14.5848 mills, 2021-22 expenditures are projected to exceed revenues by some $2.76 million, according to information presented by district business manager Brad Rau at the school board finance committee’s Jan. 11 meeting.

“The thought would be to use the fund balance to offset it,” he said, referring to money the district keeps in reserve. To balance the current year’s budget prior to its approval in June, the board used $911,675 of the surplus.

The associated boost to revenues would be about $1.3 million, bringing the projected total to a little more than $72 million.

“When we look at our revenues projected for next year, we don’t bring them all the way up to the levels that they might have been prior to COVID-19,” Rau said about the continued potential for adverse effects caused the pandemic. “But we did bring them up based on what we budgeted last year.”

Some 75% of money taken in the district, $54.5 million, is generated locally, and Rau reported that the assessed value of properties in the township has increased, meaning a corresponding boost to the tax base. Also, despite initial pandemic-related concerns, proceeds from the earned income and realty transfer taxes are trending to surpass figures budgeted for 2020-21.

Revenue from the state for the coming year is projected at slightly more than $17 million, basically representing the status quo.

“In every other normal year, that is the worst-case scenario. We figure they’re not going to go back on our funding,” Rau said, before adding district officials are “a little concerned this year.”

To get a better idea, he plans to participate in a Feb. 4 Pennsylvania Association of School Business Officials seminar examining the state Department of Education’s budget and its impact on local districts.

Peters Township received federal Coronavirus Aid, Relief and Economic Security Act funding in 2020. If similar measures are taken this year, Rau mentioned the possibility of the funding being used by the state to offset its commitments to Pennsylvania schools.

“So our net revenues would remain the same, even though we would get a bump in federal money,” he explained. “But we would get a decrease in state money.”

Regarding Peters Township’s expenditures, which are projected at almost $74.8 million for 2021-22, Rau’s presentation to the school board lists major cost drivers as teacher and staff salaries and benefits, debt service and technology investment.

Under the provisions of contracts, salaries will increase by $950,610 over the current year, and the district’s contribution to the Public School Employees’ Retirement System rises from 34.51% to 34.94%, resulting in an added cost of $382,500.

Debt service costs, projected at $9.75 million and accounting for 13.02% of total expenditures in 2021-22, reflect an aggressive strategy in borrowing for construction of the new Peters Township High School, with shorter-term bond issues than are common for such purposes.

“We made that decision that we were going to pay a little more a little sooner, but a little less overall for the complete issue,” Rau said.

In June, the school board approved lease agreements to provide computers for all district students so that they “have appropriate access to our online learning environment,” director of educational technology Adam Swinchock said at the time.

While CARES Act funding covered the expenditure for 2020-21, the budget for next year includes $375,119 for lease payments.

Adoption of the final budget is due by June 30. In the meantime, district officials will pursue ways to trim the $2.7 million shortfall.

“We’ll continue to work on that and try to get that number down a little bit more,” Rau said.

“But right now, I think this is an accurate number of where we’re sitting.”