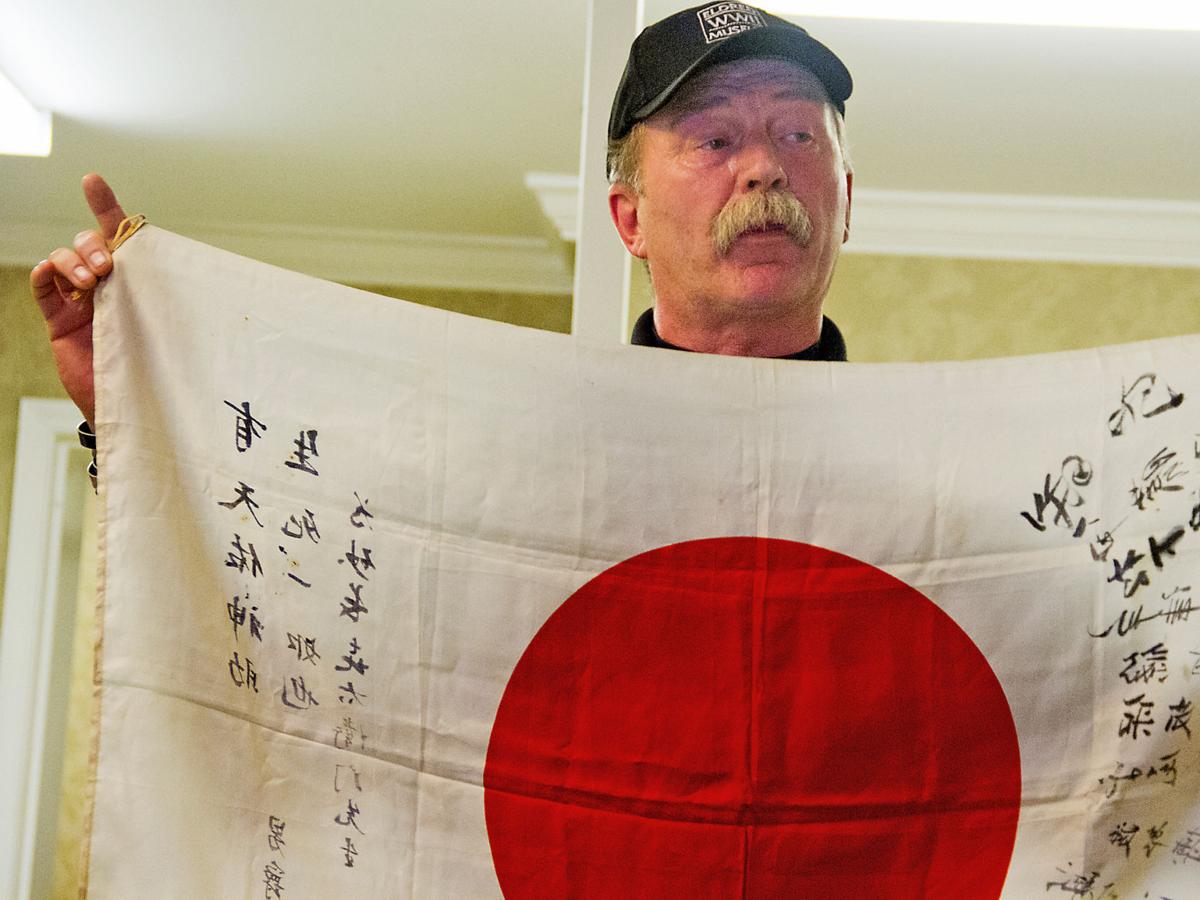 Steve Appleby explained that when a Japanese soldier went to war, his mother would have other mothers in their village write prayers on a silk flag to send along with him. 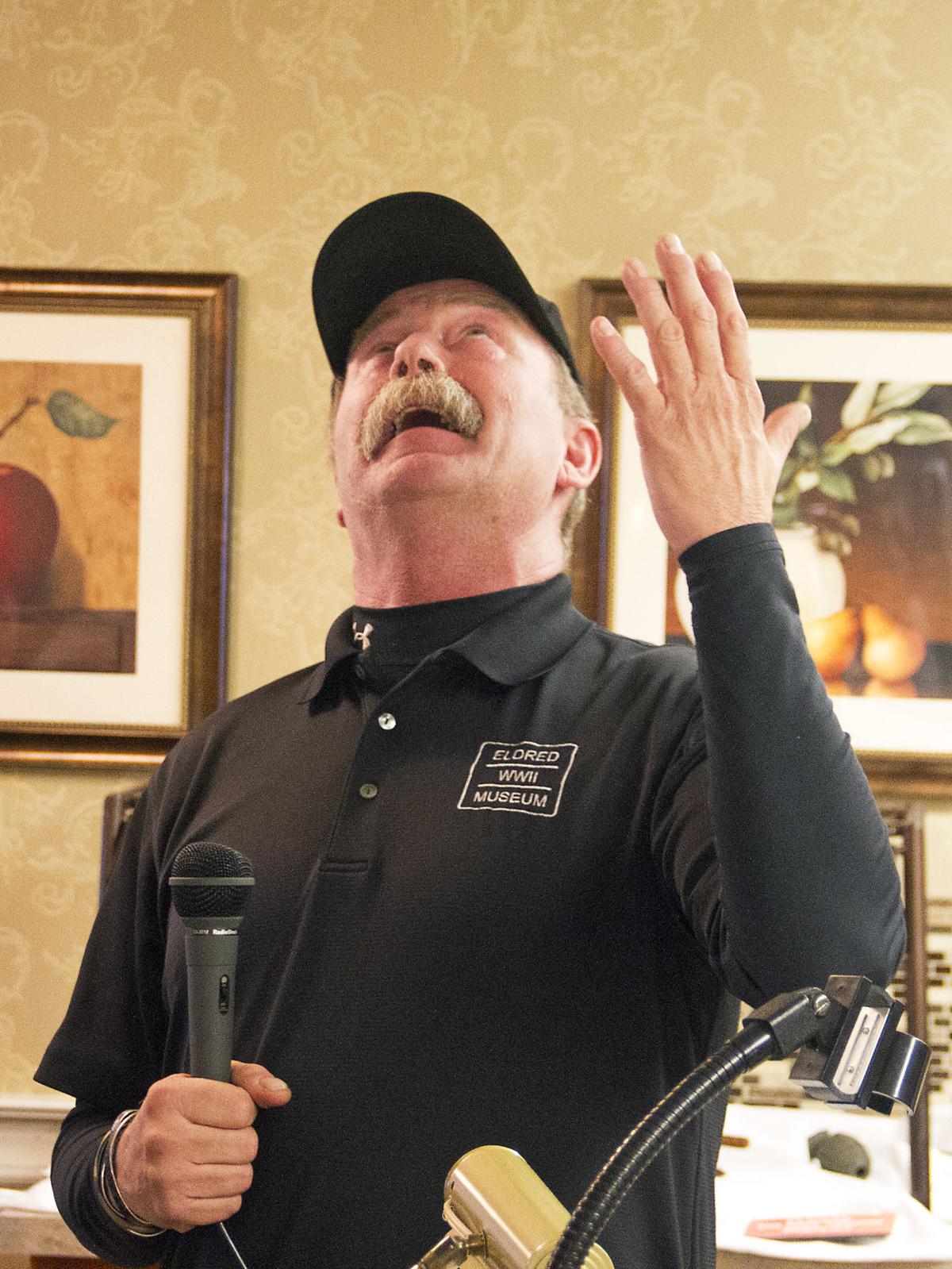 An animated Steve Appleby makes a point during his talk. 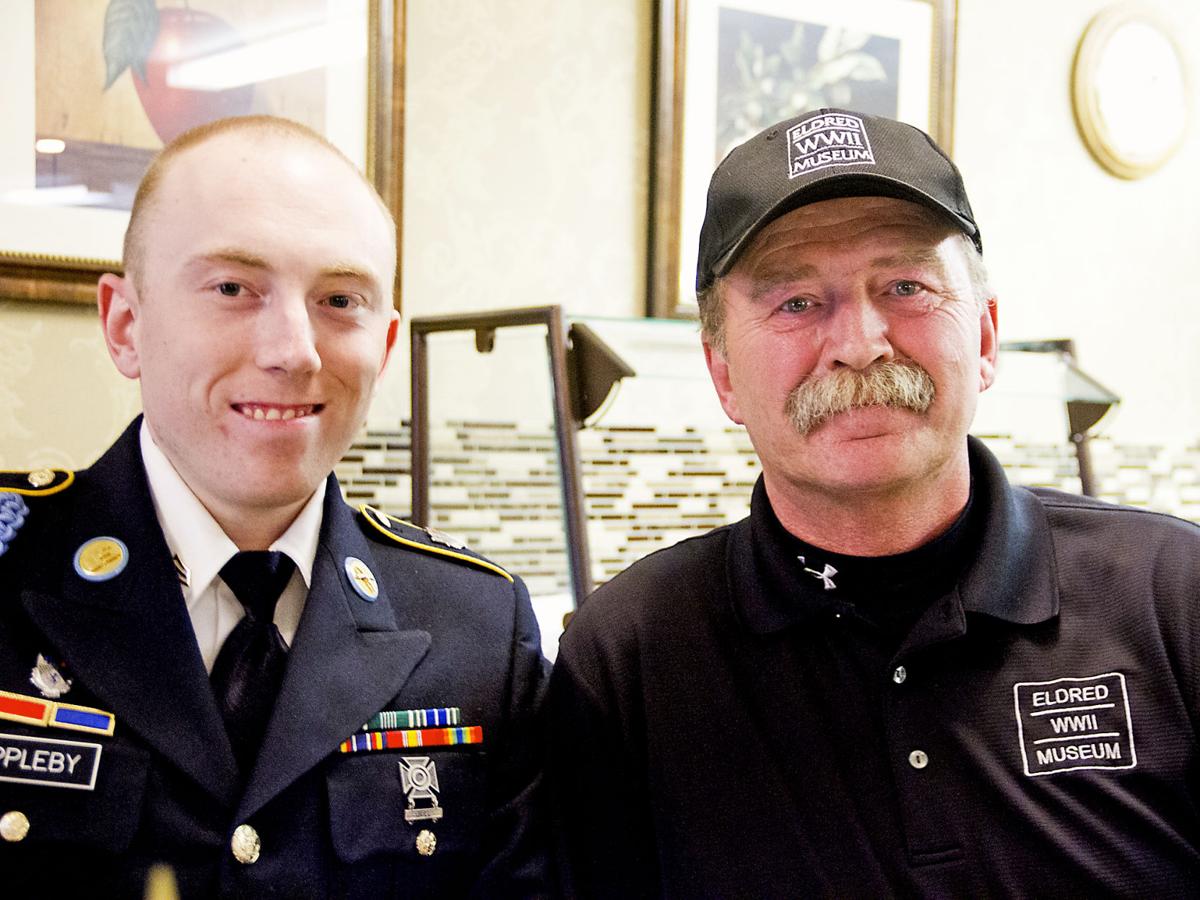 Alex Appleby of the U.S. Army joined his father for the Pearl Harbor Day remembrance at Country Meadows of South Hills. 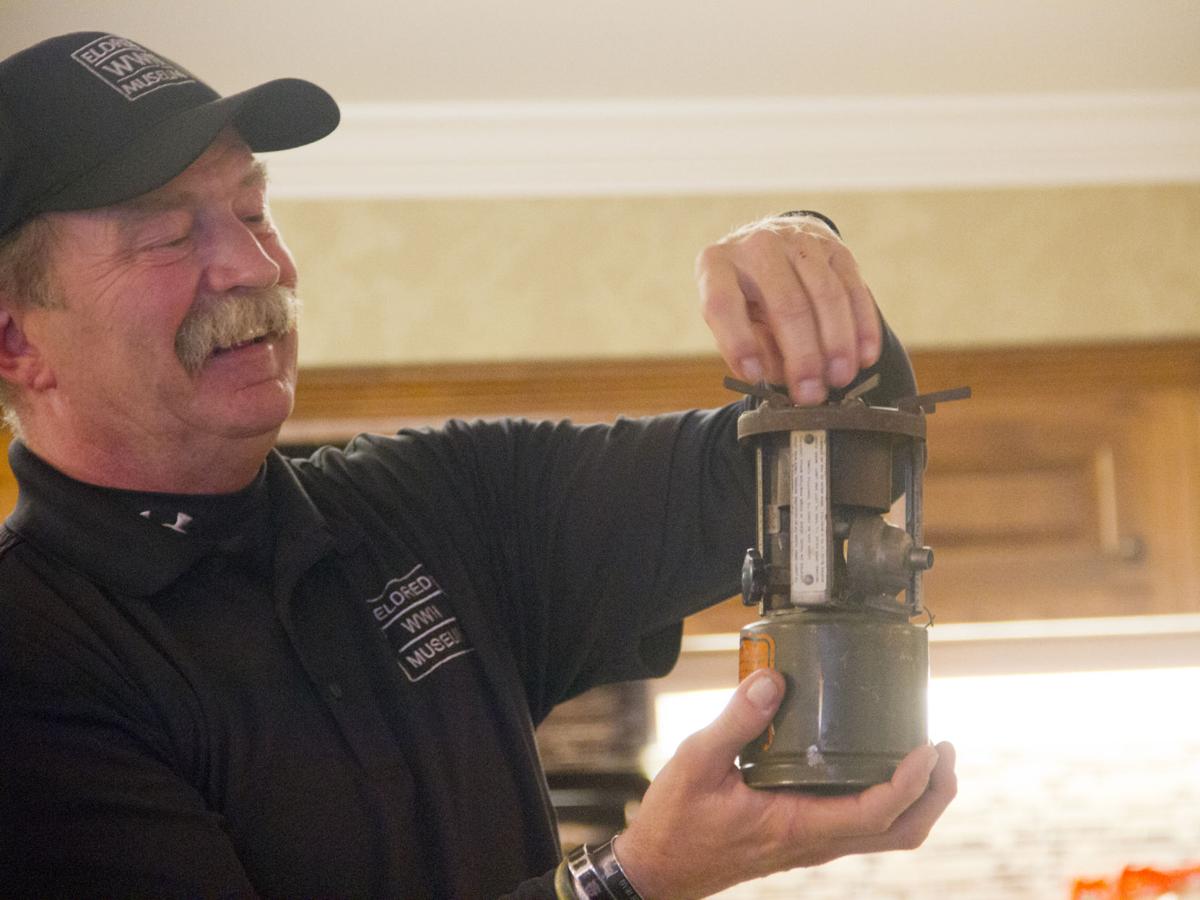 Steve Appleby displays a Coleman Model 520 stove, produced for the U.S. military during World War II, as one of the museum pieces he brought from Eldred, McKean County. 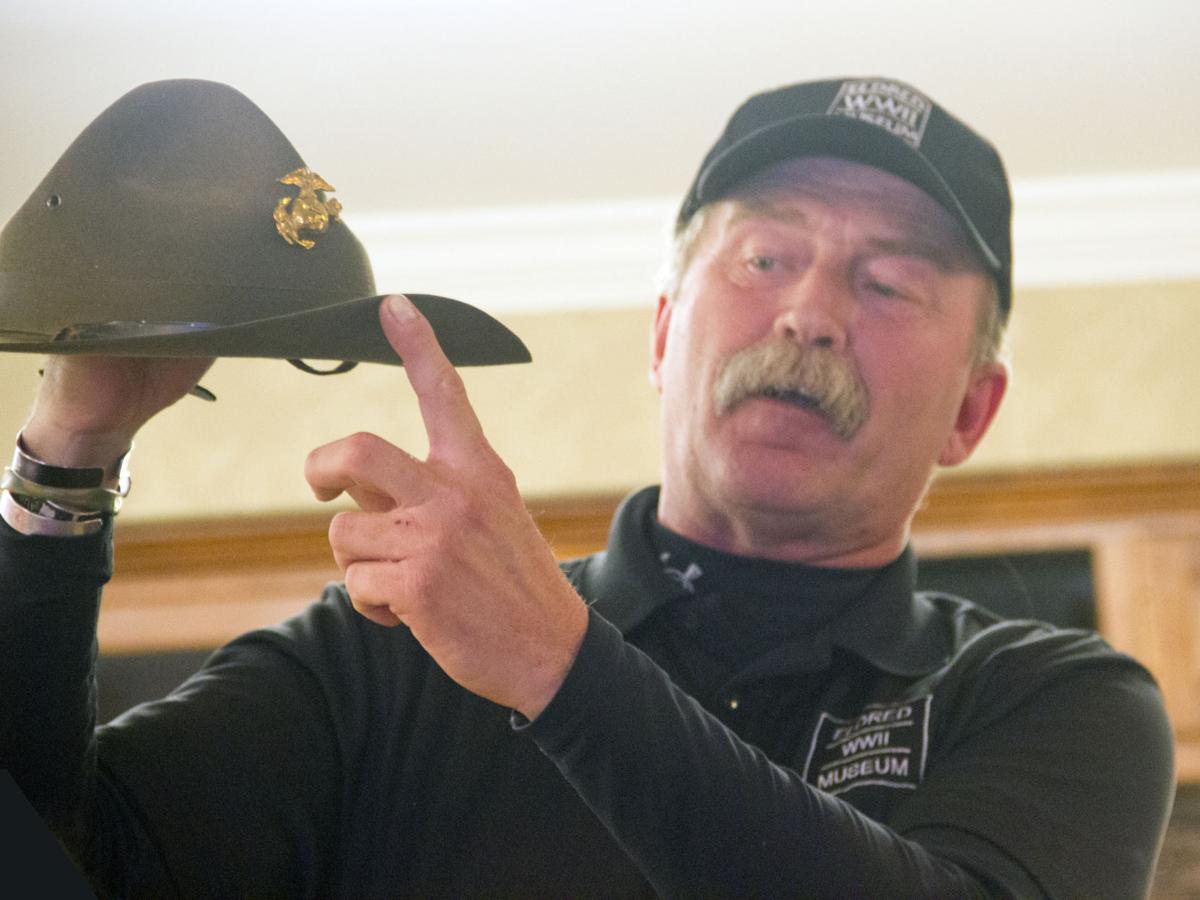 Steve Appleby displays the type of drill sergeant’s hat with which many military novices became familiar in boot camp. 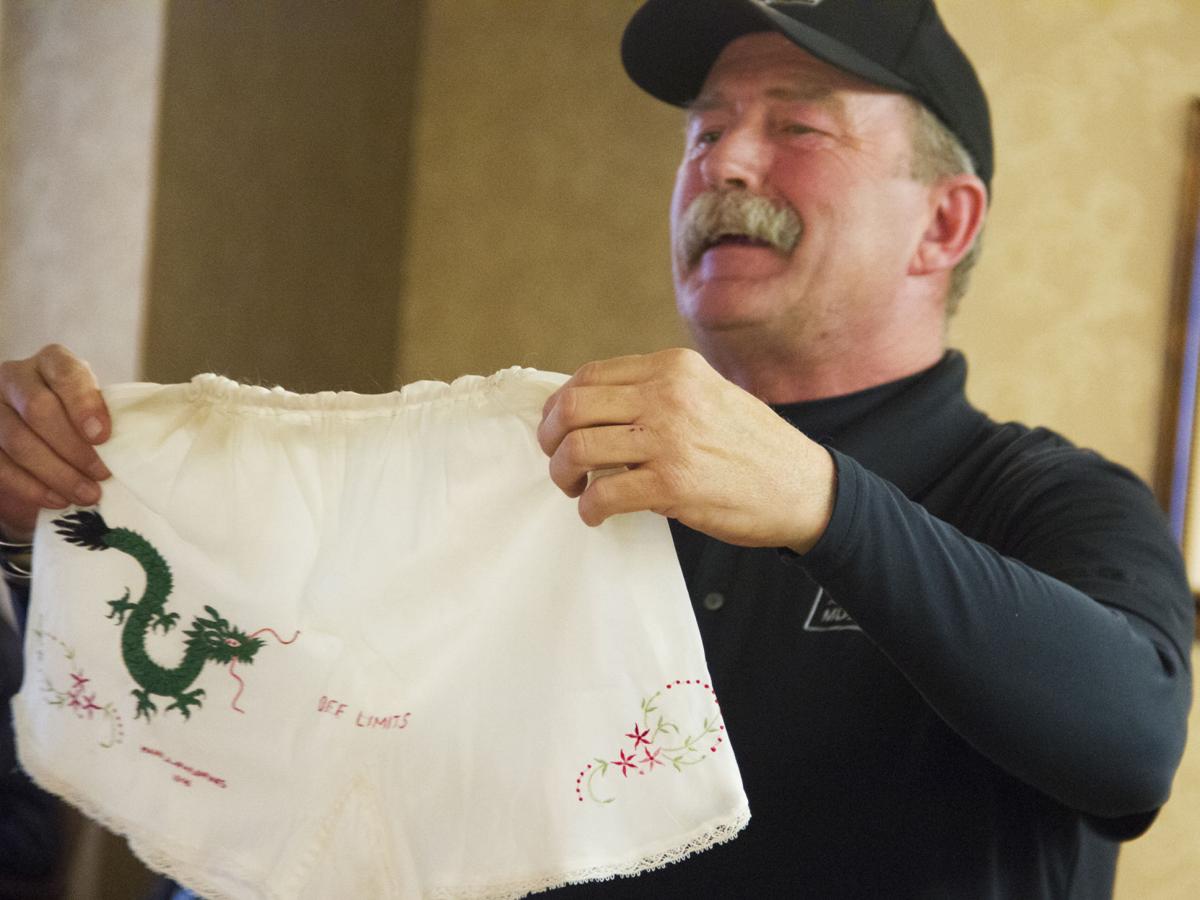 This museum piece contains the message “off limits.” 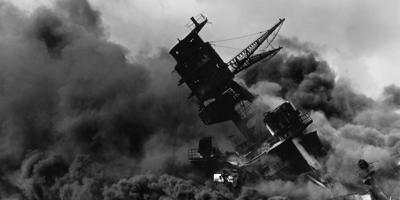 Steve Appleby explained that when a Japanese soldier went to war, his mother would have other mothers in their village write prayers on a silk flag to send along with him.

An animated Steve Appleby makes a point during his talk.

Steve Appleby displays a Coleman Model 520 stove, produced for the U.S. military during World War II, as one of the museum pieces he brought from Eldred, McKean County.

Steve Appleby displays the type of drill sergeant’s hat with which many military novices became familiar in boot camp.

This museum piece contains the message “off limits.”

For a room full of people who either served in World War II or lived through it, or are at least well-informed about it, Steve Appleby had quite the revelation.

“You’d be surprised at how many people don’t even know what Pearl Harbor is in our country,” he said. “Never heard of it. ‘What’s the big fuss about Dec. 7?’”

As guest speaker at Country Meadows of South Hills’ annual Pearl Harbor Day remembrance event, Appleby assured his audience that, as director of the Eldred World War II Museum in McKean County, he’s doing his best to make sure the people he meets don’t have to ask that question.

A native of Eldred, McKean County, Steven Appleby enlisted in the U.S. Army immediately after graduating from Otto-Eldred High School, serving in the infantry and Special Forces until his retirement in 2006.

For the last six years of his service, he was stationed at the Bradford Armory, where he was the recruiter for the local National Guard unit.

Eldred was the site of the National Munitions Co., which began operation in mid-1941, before the United States became actively involved in World War II. Approximately 1,500 people worked in the facility, and at the height of the war, 95 percent of National Munitions Company’s employees were women.

The Eldred World War II Museum was established in 1996, with the mission to:

“As soon as you walk in, the first thing you see is our motto, which is the old saying: ‘Those who forget the past are condemned to repeat it.’ So it’s very important, to us, to preserve the history of the World War II generation and use it to teach young people, he explained, and some need all the elucidation they can get:

“We have kids who come into our museum who literally say, ‘Wow! A World War Eye-Eye museum! What’s that?’”

As a U.S. Army veteran who started developing a deep interest in World War II as a youngster, Appleby expressed a substantial amount of enthusiasm in conveying his message about the importance of preserving memories of one of the key periods in human history.

“For the veterans in the crowd, I urge you, I challenge you, I beg you: Tell your stories,” he said. “Tell your families where you were and what you did.”

He acknowledged that some believe their stories aren’t worth telling:

“I hear it all the time: ‘Oh, I drove a truck in New Jersey at Fort Dix the whole war.’ I don’t care. You did something. You did your part. Every job is critical. You don’t have to be a combat veteran to count.”

Critical to Appleby’s educational mission is providing information on circumstances that led to the war, notably Japan’s brutally hostile takeover of parts of China and southeastern Asia, and, of course, Adolf Hitler’s rise to power in Germany.

Among the many items Appleby brought from the Eldred museum to South Fayette Township was a first printing of Hitler’s manifesto, “Mein Kampf.”

“I don’t recommend it,” he said. “I read it in eighth grade, and it gave me a migraine and made me sick. It’s full of hatred, death, racism. It’s horrible. But in this book, Hitler basically says, ‘I’m going to take over the world and kill everyone I don’t like.’”

He spoke out against the appeasement of Hitler in futile hopes of avoiding war and of the United States basically turning a blind eye to the atrocities being committed by the Japanese military.

“Pearl Harbor was a wake up for our country,” he asserted. “I always tell people, ‘Thank God for Pearl Harbor.’”

By extension, his hope is that perpetuating the knowledge of what caused the war – he basically boils it down to a solid case of good vs. evil – can help avoid a repeat.

And despite his stories of the lack of knowledge among young people, he did offer some hope.

“I had a kid in there not long ago,” he said about the museum, “13 years old, walk up to me, tugged on my shirt. He asked, ‘Do you think if Neville Chamberlain would have stood up to Hitler in Munich in ’38, we could have avoided the war altogether?’ So there are still those out there who still get it and love your generation.”

Howard Chandler, 89, tells of the horrors he and his family faced in Poland during World War II.