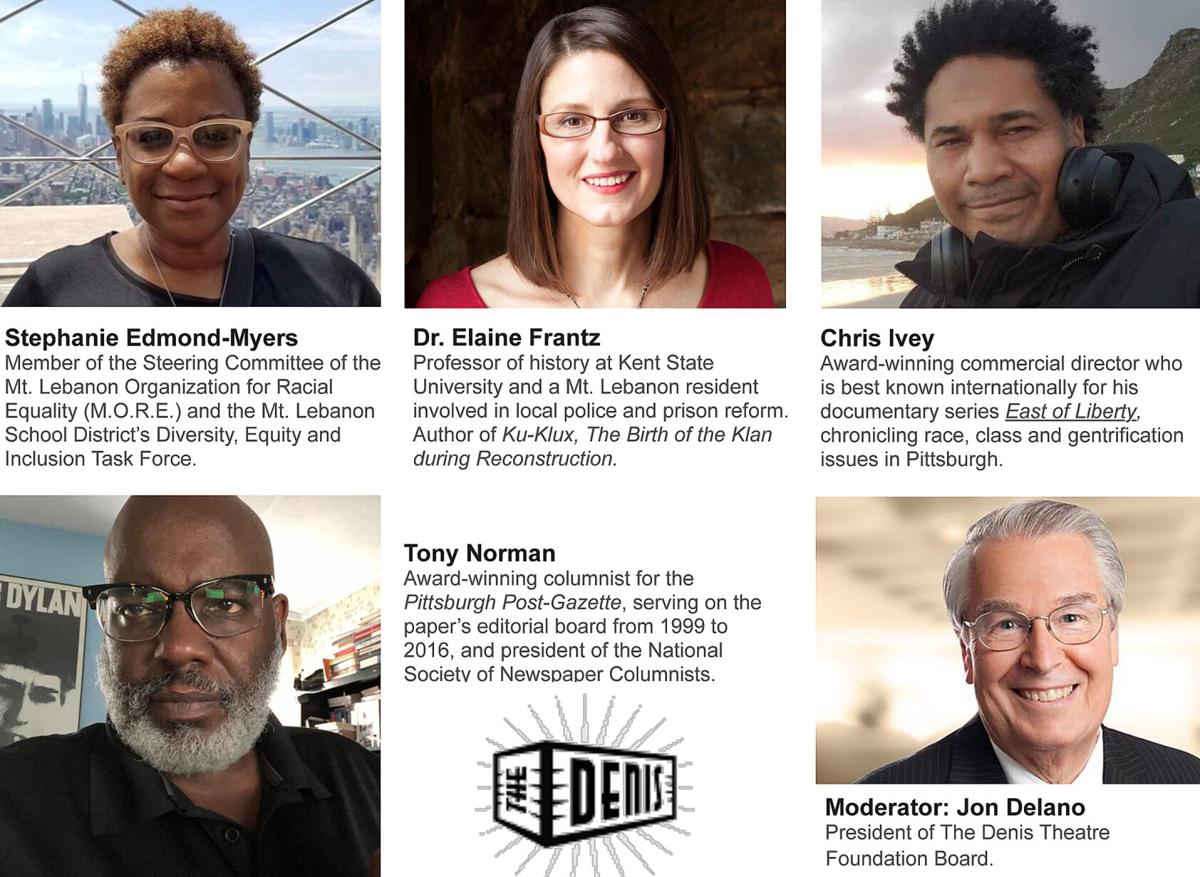 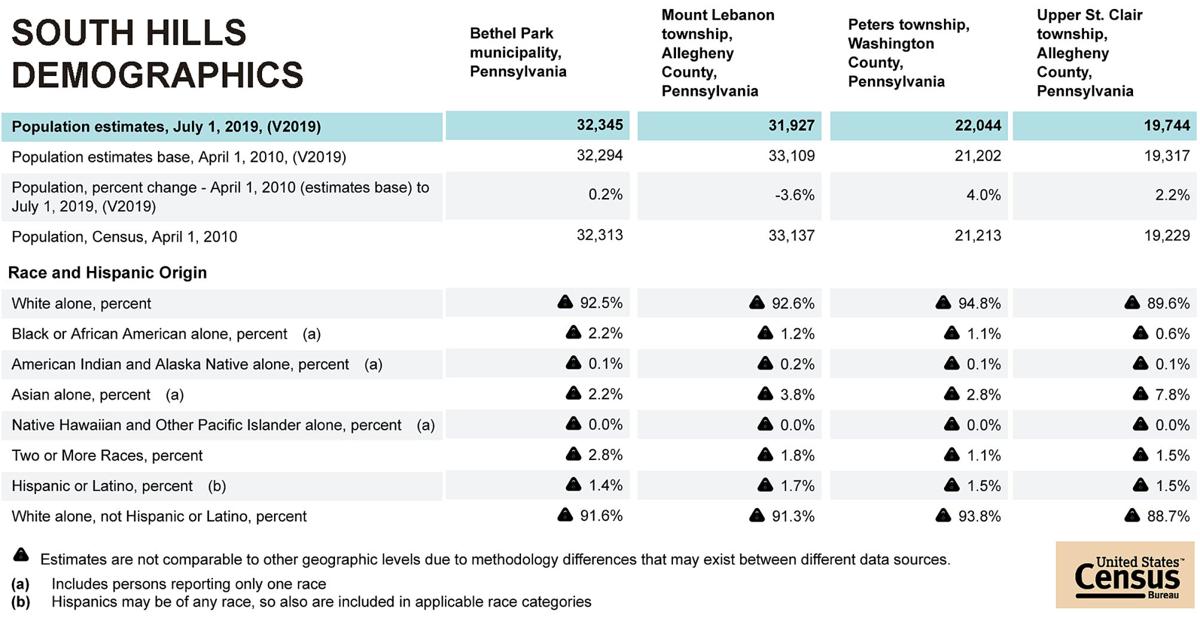 Note: This is the first of a three-part series.

The simple act of a friend shutting off an electrical appliance taught Stephanie Edmond-Myers a lasting life lesson.

As she watched the young woman hold back her tresses, Edmond-Myers had somewhat of a revelation.

“I’ve never thought about it that way. I have short hair. I never even think about my hair getting caught in the fan. I just reach down and turn it off,” she recalled telling her friend. “We have one fan, but we have two different experiences.”

Since then, the Mt. Lebanon resident has viewed the exchange as a metaphor for varying perceptions within American society, as she expressed during a recent panel discussion on “Racism – In My Neighborhood?”

Presented virtually by the Denis Theatre Foundation as part of its ongoing efforts to promote conversation within the community, the 90-minute program featured a considerable amount of insight from Edmond-Myers and fellow panelists Elaine Frantz, Chris Ivey and Tony Norman, along with moderator Jon Delano.

Regarding her friend and the fan, Edmond-Myers hypothesized about her response going in another direction.

“If, instead of saying that to her, I would have said, ‘What? That’s nonsense. Why would you worry about something like that,” she said. “That’s never happened to me.’ Or if I were to say something like, ‘The fan is there to keep us cool. What is there to fear? Maybe you’re doing something wrong.’”

Drawing on that scenario, people with closely cropped hair become the “dominant caste,” as Edmond-Myers termed it. And they set the ground rules for how the fan – that’s society – should be perceived.

“The difficulty for people like myself, who are not members of the dominant caste, is that we have no say-so in the formation of the system, and our needs and viewpoints are not considered. And therefore, they’re not represented,” Edmond-Myers said. “These types of problems not only exist in suburban communities, but they’re perpetuated by systems. It’s basically inherent.”

She lives in the midst of a suburban area that is rife with homogeneity in terms of demographics, with U.S. Census Bureau estimates listing about nine out of every 10 residents in four major municipalities along the Route 19 corridor as “White alone, not Hispanic or Latino.”

Delano, another Mt. Lebanon resident, pointed out a consequence of a longstanding lack of diversity, even as overall attitudes ostensibly change.

“We’re in a society where overt racism is no longer acceptable, period. It’s still there. We know it’s there in certain pockets,” he said. “But what we really have is covert racism, and racist systems or impacts that are racist, without necessarily the folks knowing that they’re being racist.”

Or they very well may be aware, according to Frantz.

“There’s a real anxiety that people have to think that they might be racist, and sort of at the heart of that is the fact that they are racist. Certainly being a white person in this world, you’re a racist. It’s just how it is, living as we do and being raised how we were,” she said.

“You can try not to harm people with your racism and really work at it,” the Mt. Lebanon resident continued. “Instead, maybe they should worry more about what harm their racism is causing. And then I think that in some way, that would make people feel a little bit more empowered to do something helpful and less sort of self-focused.”

Norman echoed the need for making efforts toward helping to understand the plights of others.

“Along with systemic discriminations and racisms and so forth, you really do have a failure of empathy and a failure of imagination,” he said. “I mean, a racist is usually the dullest person in the room, the person who is unable to imagine him or herself in another person’s experience. And that’s profoundly, profoundly sad.”

The focus of “Racism – In My Neighborhood?” isn’t limited to the suburbs. Ivey, a Squirrel Hill resident, discussed what he has faced in the region during his career as a filmmaker.

“When I started doing commercial work, when I was younger,” he said, “it was hard for me to get work at first because, one, I was the youngster director in that level of work, and two, because I was Black. And it still goes on today in the Pittsburgh advertising industry, and it goes on in a lot of different ways.”

He is a native of Monroe, N.C.

“It’s extremely conservative, but at least it’s all out in the open. You know what you’re dealing with,” Ivey said. “Here, it gets more to the way that the city is run and everything goes, and I find that a lot more scarier that way, trying to figure out, where do I fit?”

For their part, Norman and his family have found a good fit in Pittsburgh’s Swisshelm Park neighborhood.

“We could have moved out to the suburbs, but we want to be where we felt that our three sons would have a good education. And it is possible to get a good education in the city, at the right schools,” he said.

“My boys certainly got a taste of the suburbs whenever they would go out and play soccer at one of the suburban schools, and get called names. So there was like a sense that the suburbs weren’t really ready for at least the Norman family, once upon a time,” Norman recalled.

“If my wife and I were to downsize and try to find a new place, would we go to the suburbs? Eh,” he said, unenthusiastically. “I mean, it would be a little more welcoming now than it would have been 30 years ago, when we were starting out. But it would not be a priority. The city is fine. We like diversity. Diversity is a positive thing, and we don’t necessarily want to be the people who are causing the diversity. We kind of like to take it for granted.”

Remedying systems that have failed to produce diversity first entails acknowledging their existence, according to Edmond-Myers.

“One of the things in the Black community that we say often is, ‘Get your people.’ And what we mean by that is, start having conversations with your people,” she said. “That, a lot of times, is the hard part, to actually call people out. But it’s crucial.”

“Anti-racism is a commitment to fight racism wherever you find it, including in yourself,” Edmond-Myers asserted. “And that’s the only way forward.”