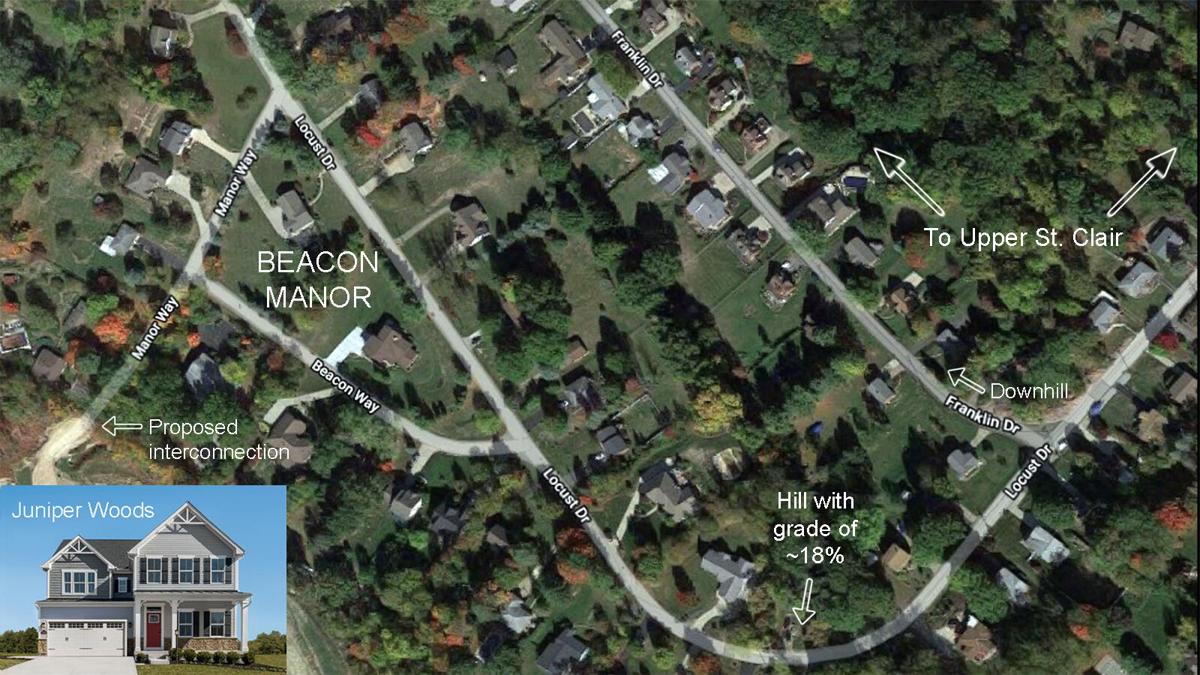 For decades, Locust Drive has provided the only vehicular access to the neighborhood that also includes Manor and Beacon ways. At issue is a possible connection from Manor Way to the Juniper Woods residential development. 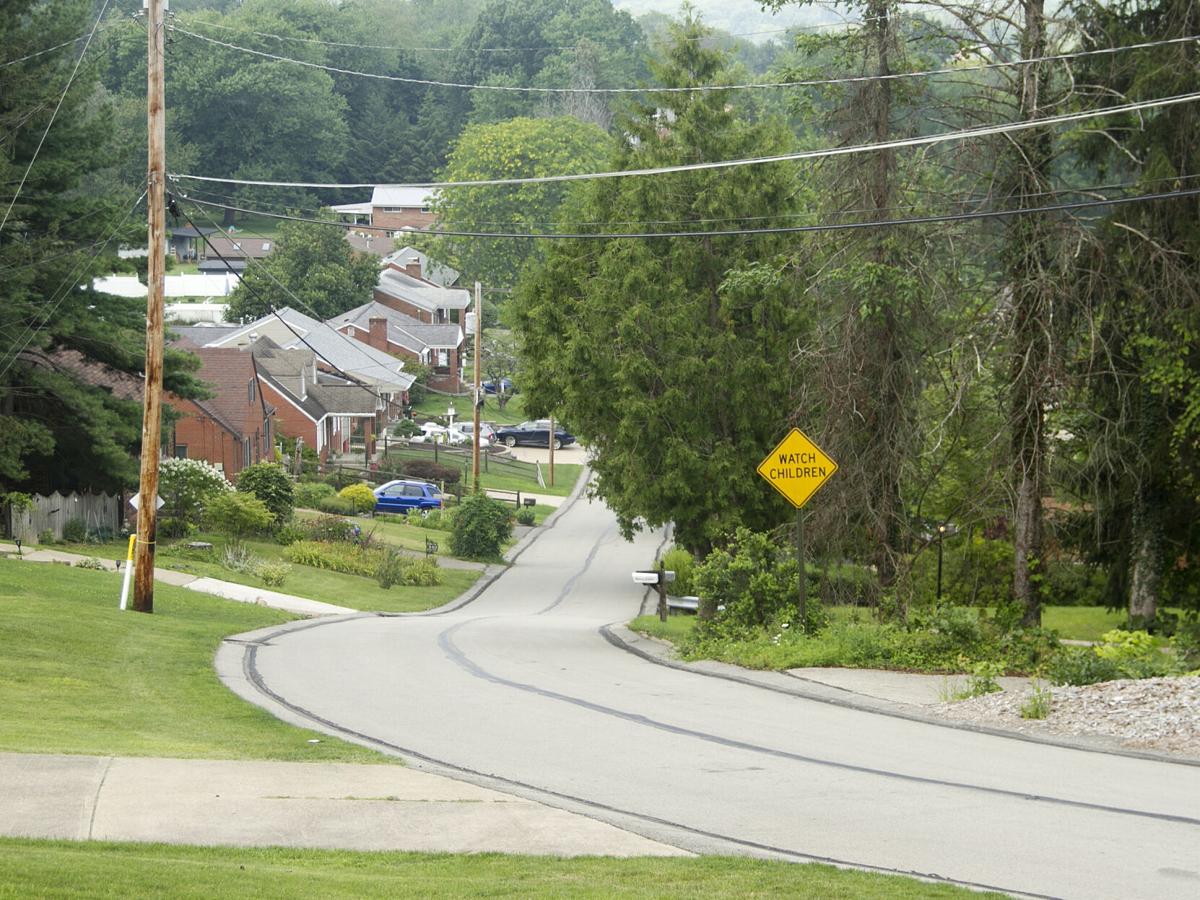 From its intersection with Locust Drive, Franklin Drive has a steep descent. 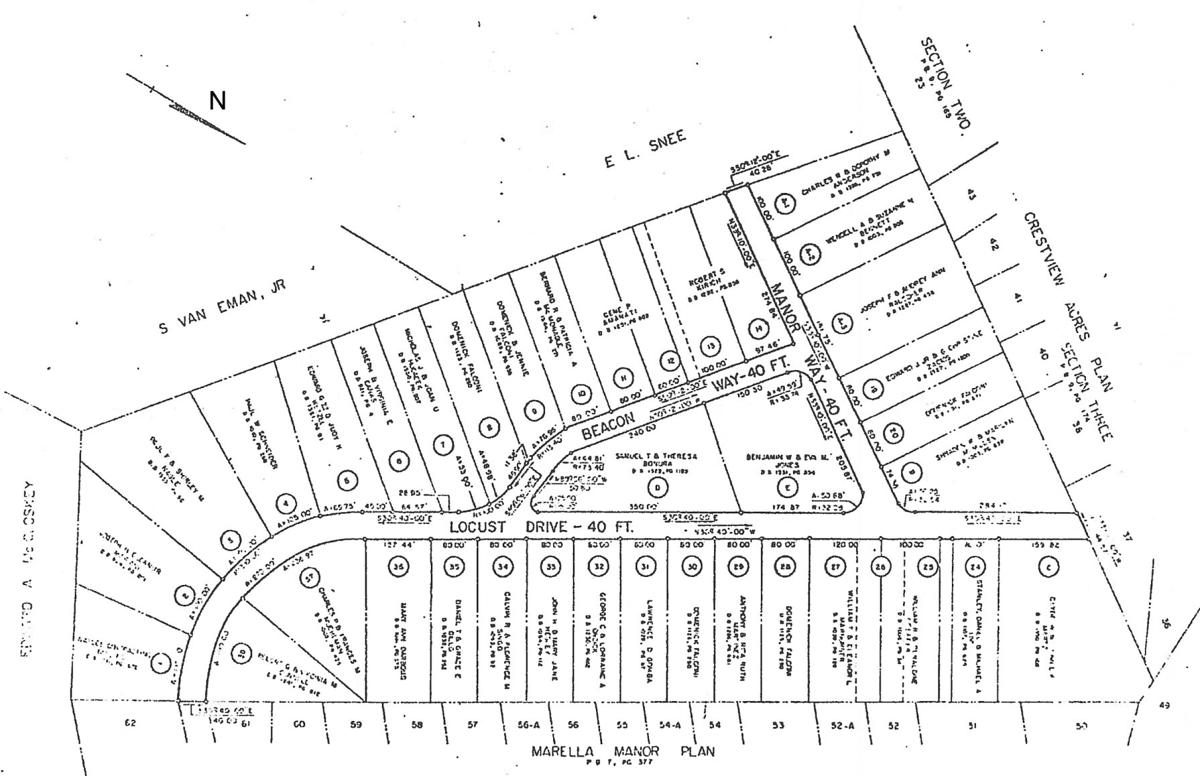 A 1972 rendering of the Becaon Manor Plan of Lots shows Manor Way extending south to the Snee property line. 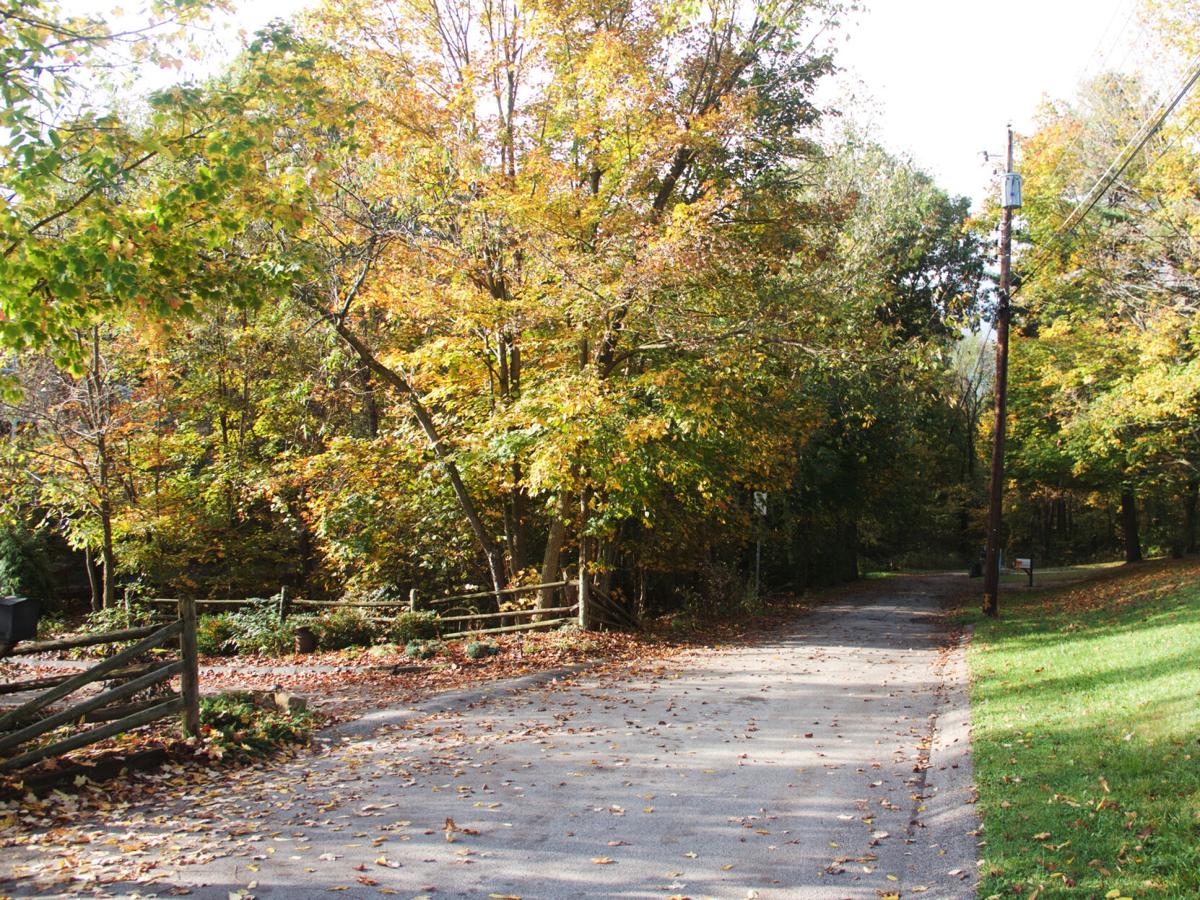 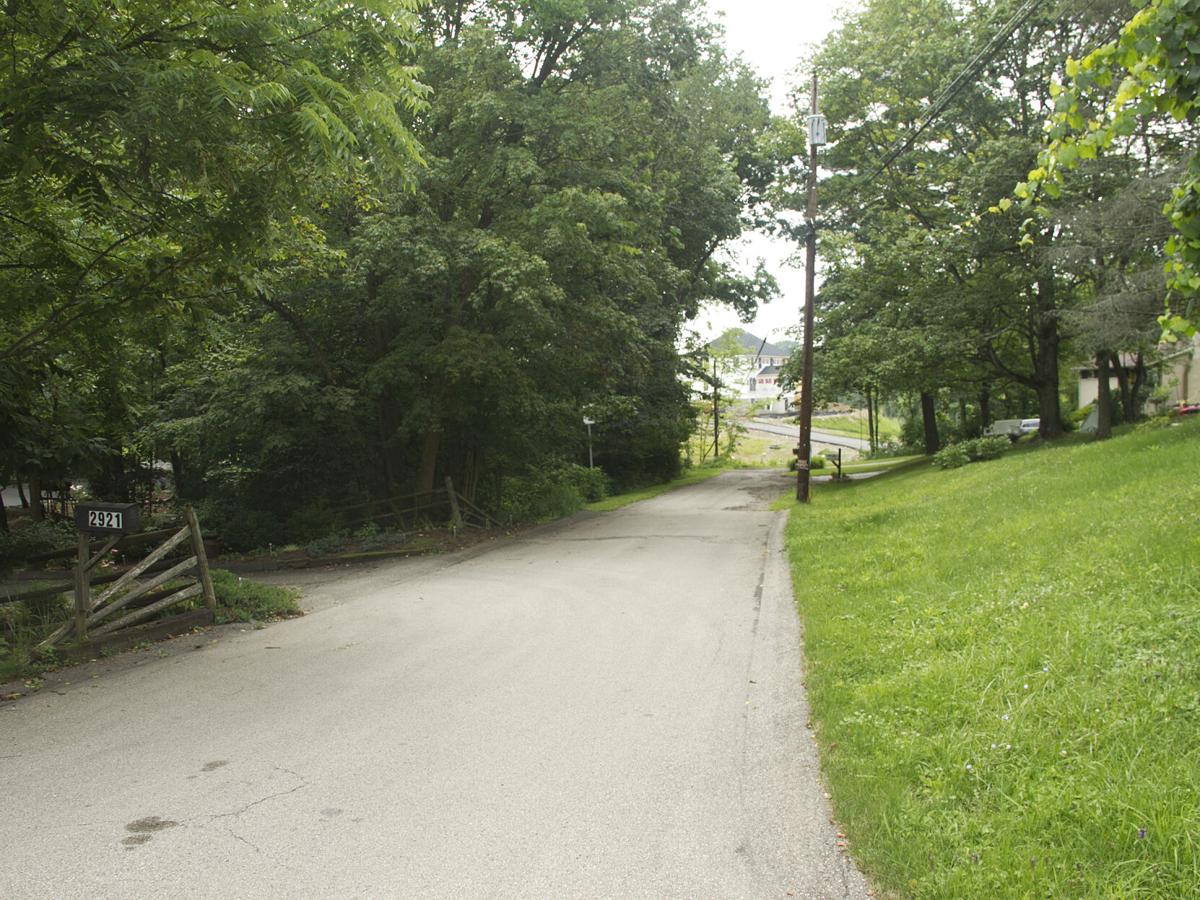 For decades, Locust Drive has provided the only vehicular access to the neighborhood that also includes Manor and Beacon ways. At issue is a possible connection from Manor Way to the Juniper Woods residential development.

From its intersection with Locust Drive, Franklin Drive has a steep descent.

A 1972 rendering of the Becaon Manor Plan of Lots shows Manor Way extending south to the Snee property line.

Residents of a relatively isolated Peters Township neighborhood are continuing their attempts to keep it that way.

For decades, the only vehicular access to Beacon Manor has been to travel through Upper St. Clair and then navigate a steep hill to reach the homes below.

On May 10, township council narrowly voted down an ordinance and declaration of taking that would have resulted in the acquisition of land necessary to build a second means of ingress and egress.

Council members, though, have discussed revisiting the issue, and many of the residents of Beacon Manor and the adjacent Marella Manor plan are concerned about the possibility.

At the heart of the matter is safety, from two different perspectives.

The residents’ primary concerns are related to the increase in traffic that would result from connecting Manor Way, which always has been a dead-end street, to the new Juniper Woods residential development.

Meanwhile, the township’s position basically is that a second means of access would decrease response times and provide an alternate route during emergencies.

The situation has its genesis when the Beacon Manor Plan of Lots was recorded with Washington County in 1954.

“It should be recognized that Manor Way was stubbed to the adjacent property line during the layout and recording of the Beacon Manor Plan, allowing for a future connection,” Mark Zemaitis, township director of engineering, wrote in an Oct. 2, 2017, memo to council.

The correspondence was in advance of a meeting at which council voted to approve the preliminary plan for Juniper Woods, located on 30 acres to the south of Beacon Manor on property once owned by the family of the late Edwin Snee.

At that point, residents to the north already were objecting to making the connection. The two sets of owners of the Manor Way property abutting Juniper Woods – Joe and Deb DeLisio, and Sherri and Jason Snyder – wrote to council Sept. 14, 2017, about more traffic on streets that “do not comply with township required width guidelines,” along with a “potential for increased crime.”

“If only emergency service is allowed to use this connection, everyone’s position would be satisfied,” the letter states. “There would be no change in current traffic in the Beacon Manor plan. Therefore, the concern of road width would not change. Also, studies of dead-end roads related to increase of crime are inconclusive, and we feel the Peters Township Police Department would provide the proper protection.”

Recently, Joe DeLisio and Jason Snyder were among a group of residents who gathered at the Beacon Way home of Jim Kittelberger and Deb Bosco to reiterate their concerns.

“We’ve been here 38 years, and the township wasn’t worried about our safety until this plan started coming through,” DeLisio said, referencing Juniper Woods.

He spoke about motorists attempting to navigate Locust Drive, which now represents the only access to Beacon Manor and has one of the steepest grades in the county, estimated at 18% in township records.

“They start down that hill and they don’t know it. They’re going to be all over the place,” he said.

“There are going to be accidents.”

Snyder has gathered petitions indicating a large majority of residents of Beacon Manor and Franklin Drive, which runs just north of the neighborhood, do not want the interconnection.

He cited the narrowness of local streets, which have no sidewalks, as one of the major factors.

“I would love to get the council members to drive down this road with a UPS truck and a bus, and see how they fit, see how tough it is,” he said.

In 2004, the township made improvements to Beacon Manor streets, with the exception of the Manor Way “stub,” with the intention of widening them to 18 feet. Zemaitis’ 2017 memo references a portion of Locust Drive that has a width of only 17 feet because of “a concrete driveway that is not parallel with the road and juts out into the roadway slightly.”

But Beacon Way resident Andy Kisty said he has taken measurements on Locust, which runs behind his property, showing widths as low as 16 feet, 10 inches. In his view, opening the neighborhood to more traffic would create additional risks without necessarily improving emergency services.

“I’m here 44 years. I have never had a problem with police or fire trucks, never to this day,” he said. “And it shouldn’t be a problem now.”

Another Beacon Way resident, Adam Blank, has impaired vision and is wary of the presence of additional vehicles.

“I am an avid walker. I have walked this whole neighborhood for a long time, and everybody knows who I am,” he said, adding his route sometimes takes him up the Locust Drive hill from his house. “When I get to that crest, I cannot see if a car is coming. I have to use my hearing to judge. It really is about a safety issue here.”

His father, Ken Blank, also mentioned the potential for hazards on the hill.

“If someone is coming down there speeding, they have no time to react,” he said. “And at that point, I’m in harm’s way with my dog, and God forbid I have my grandkids out there walking.”

Above Beacon Manor, Locust Drive intersects with Franklin Drive near one of the highest points in Peters Township, and residents there are worried about more motorists using their street to reach points northwest.

“I’ve been here for 30 years. Speeding has always been a problem,” David Zrowka said. “Anybody who wants to go to Route 19 makes a left onto Franklin, blazes down the road.”

He also said drivers tend to ignore stop signs along the way, and he supports the idea of a Manor Way connection with limitations.

“Worst case, they can put in a one-lane access road and gate it, and that was brought up at the original meeting,” he said. “They get their access, and we don’t have a safety concern on a daily basis.”

The minutes of the council meeting of Oct. 9, 2017, state member Monica Merrell “added that she would rather have the interconnection be emergency access only.”

At that time, she and Frank Arcuri voted against the Juniper Woods preliminary plan, which was approved 5-2. This May 10, they were joined by Gary Stiegel Jr. and Robert Lewis in rejecting the Manor Way declaration of taking.

Lewis later said he voted against the measure because he “felt it was one more instance where government was telling a bunch of people, don’t think they can take care of themselves, that they’re wrong and you’ve got to do this.”

His explanation came during council’s June 28 meeting, at which the Manor Way issue arose as part of a discussion about street interconnections throughout the township, in general.

If the policy eventually applies to Manor Way, Trish Tegley of Franklin Drive wonders whether future residents of Juniper Woods, which still is largely under construction, are aware of the possibility.

“It’s not going to be one way. They need to realize that there’s going to be a lot of traffic, especially these houses in this first circle going past them all the time,” she said about those closest to Beacon Manor.

And once motorists enter her neighborhood, Bosco is concerned for their safety.

“We all know how to drive on these roads here,” she said. “Unless there’s ice, I think every one of us can make it up and down these hills. But you take an inexperienced driver, when it’s pitch black with no streetlight, it’s dangerous for the folks who are even passing through, not to mention the danger for us.”

Regarding the potential for the degree of additional traffic, Jason Smith, who lives at the corner of Locust and Franklin, cited the role of Global Positioning System navigation in guiding motorists north from Juniper Woods.

“When you’re anywhere on that side, it’s going to take you the shortest route,” he said.

As it stands now, the only access to Juniper Woods is from Thompsonville Road. And according to Google Maps, the drive from the development’s Thompsonville entrance to the end of Manor Way – via East McMurray Road, Hays Road and Locust Drive – is 2.4 miles and takes approximately seven minutes.

Beyond the safety aspect, residents who oppose the interconnection just plain enjoy their current environment.

“This is a family residential area,” Franklin Drive resident Steve Magan said. “These people are moving here because of what we have, because of the community that it is. Don’t change where we live because it’s convenient for you. That’s not fair. That’s not what this community is about.”