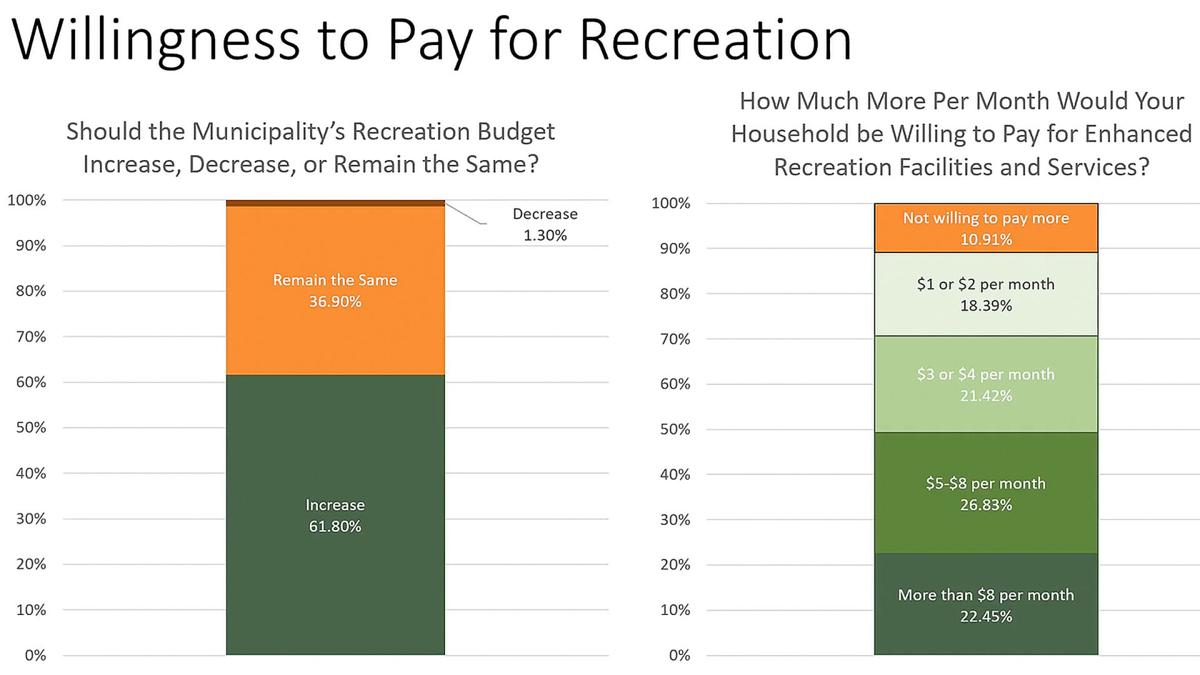 The results are in for a survey pertaining to an update of Mt. Lebanon’s parks master plan and a related feasibility study for a community recreation center.

Among the new offerings that are popular among those taking the survey are educational classes, cited by 57% of respondents, followed by rock climbing, 37%, and accommodations for pickleball, 33%. New amenities residents would like to see include permanent bathrooms, 45%; bike paths, 45%; and nature trails, 44%.

Assisting him were Carolyn Yagle and A.J. Schwartz of Environmental Planning and Design, lead consultant for the master plan feasibility study project.

The survey received more than 2,100 responses, including about 4% from those who live outside of Mt. Lebanon, but use its parks, according to McMeans.

He compared the level of participation with a similar gathering of input in 2013 for the current municipal comprehensive plan.

“That really speaks to the work that Carolyn did and our public information office did to get the word out about the survey through a variety of different methods,” he said.

Yagle, Environmental Planning and Design’s director of planning and policy, said responses were fairly consistent, in terms of geography and demographics, with regard to the top choices in the survey’s various categories.

“These were also the ones that rose to the top pretty much of each ward,” she said. “The respondents to this survey are representative of many age groups.”

One exception to the overall consistency was pointed out by Schwartz, director of urban design for EPD.

“Only the climbing is in a more narrow user group or set of age cohorts,” he said. “It’s anywhere from youth up to about early 30s, mid-30s. That’s typically what the demographic is.”

Regarding what they would like to see in conjunction with a community recreation center, 65% of respondents cited “programs of interest.” Available parking (42%), affordable pricing (41%), common areas (31%), event space (28%), centrally located (24%) and accessibility (15%) rounded out the top selections.

The survey also gauged willingness to pay for amenities.

Only 1.3% of respondents suggested reducing the municipality’s recreation budget, while 61.8% supported an increase and 36.9% remaining the same.

As far as money from their own pockets, almost 90% of the respondents said they would be willing to pay at least a little bit more per month.

“Everything usually comes back to budget numbers,” McMeans said, “and this is good feedback to have moving forward as we look at not only the feasibility of a recreation center, but also investments in our parks that need to be made.”

The next step in the process is to gain more community feedback and then to develop recommendations for commissioners to consider.

“The goal here is to have recommendations, at least in a rough-draft form, by October so that we can make a presentation to the commission,” McMeans said, “prior to the commission going into budget meetings in November.”

Commissioner Andrew Flynn suggested looking at the longer term with regard to financial and operational considerations.

“I want to caution people not to rush into decisions,” he said.

“I would just be really hesitant to go jumping in right from the plan to ‘hey, let’s look at budget items to go spend money on,’ without further thinking.”

He did, however, compliment the progress that is being made on the project.