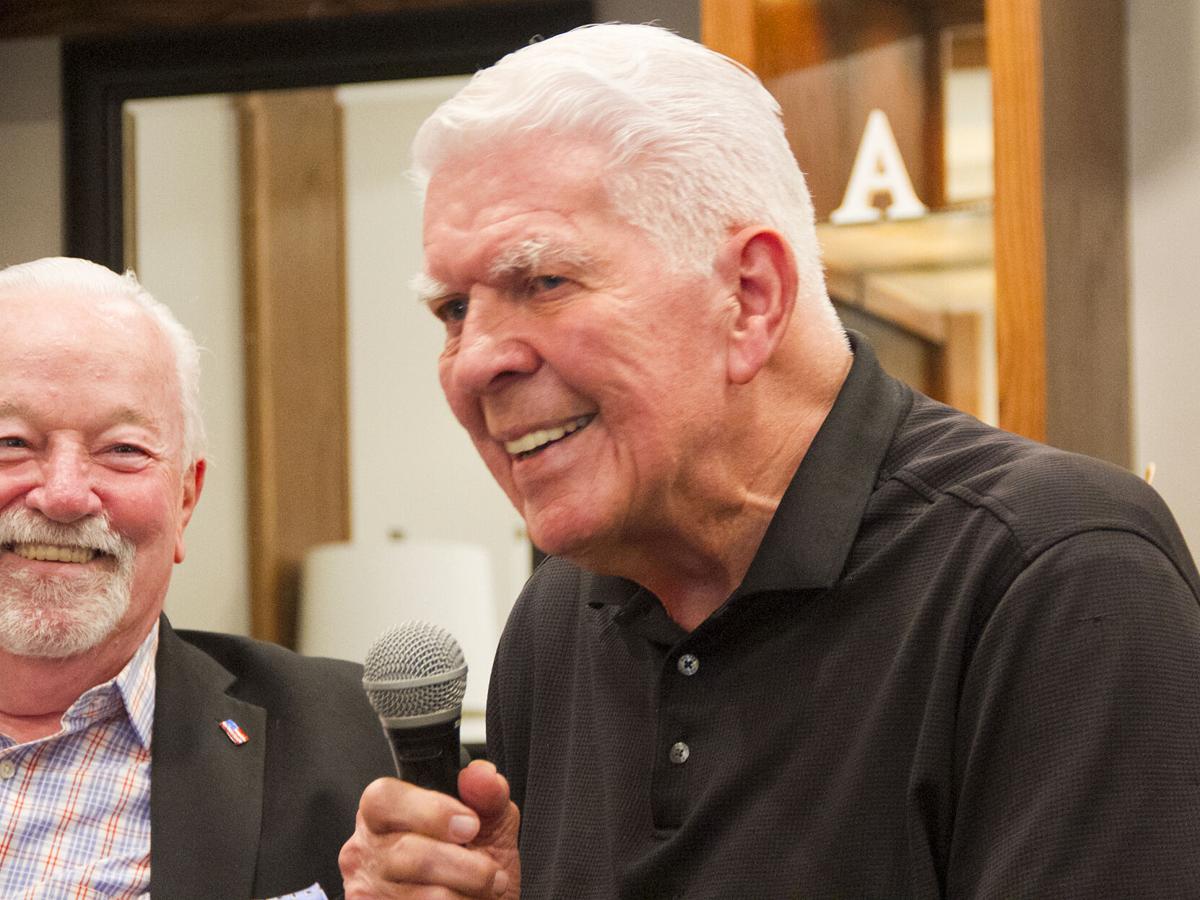 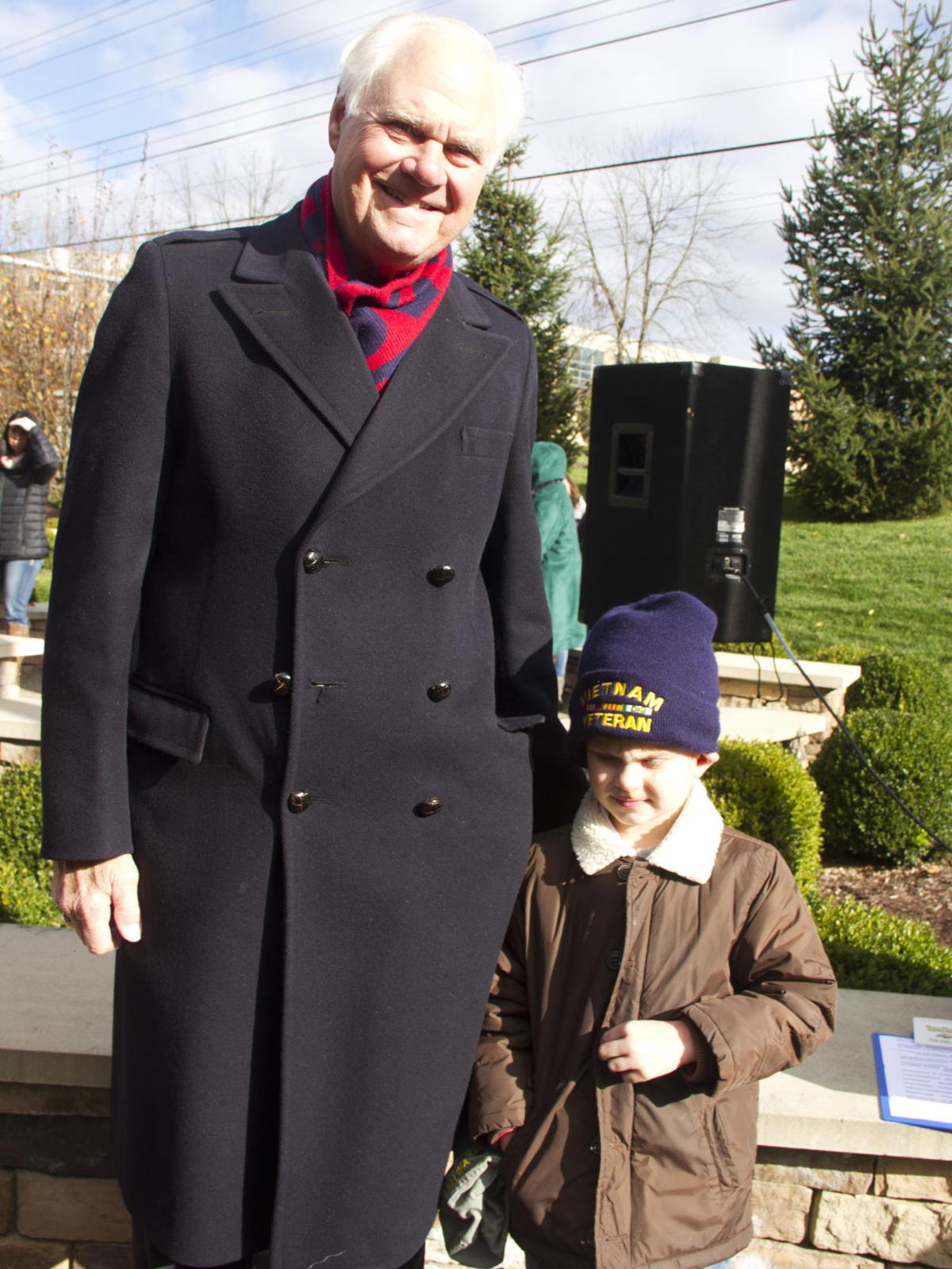 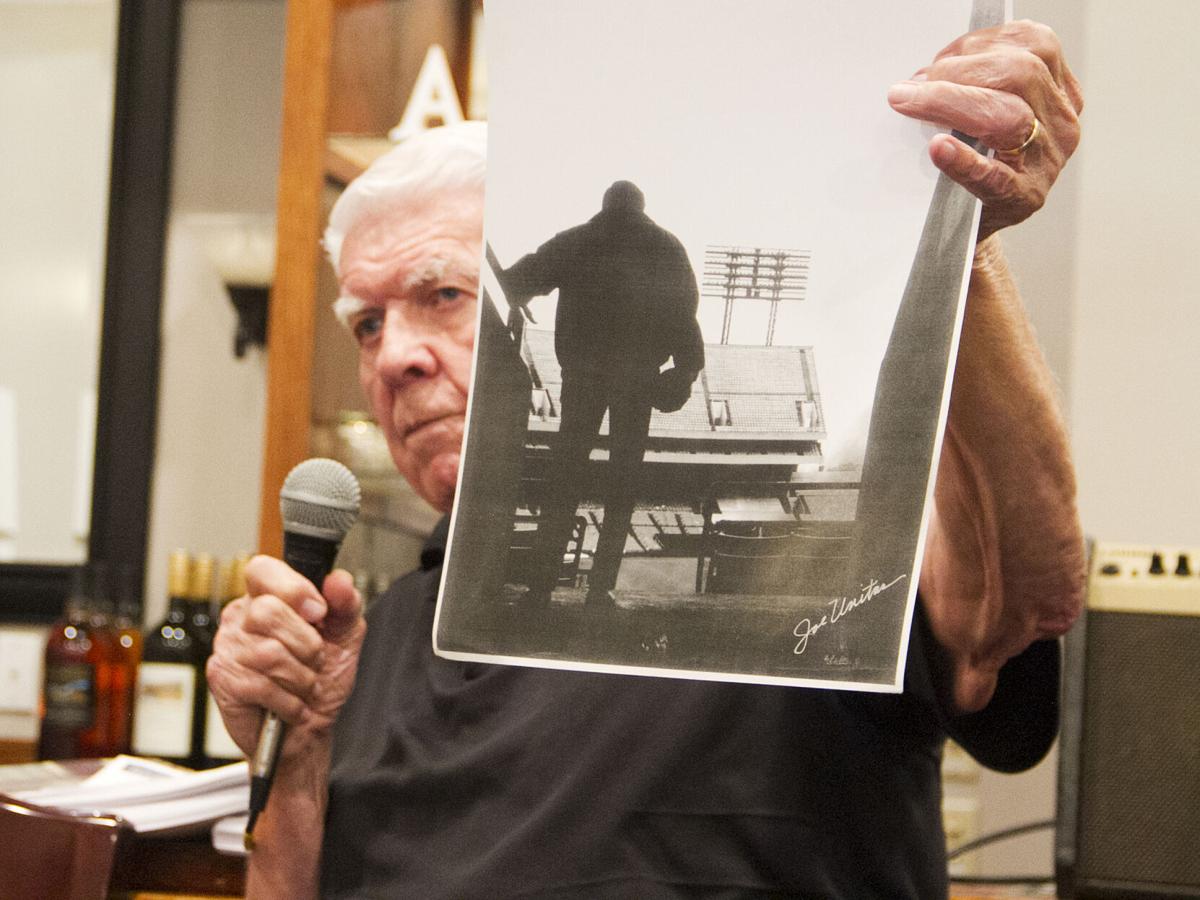 Joe Unitas shows a photograph he took of his cousin John at Baltimore's Memorial Stadium in 1992. 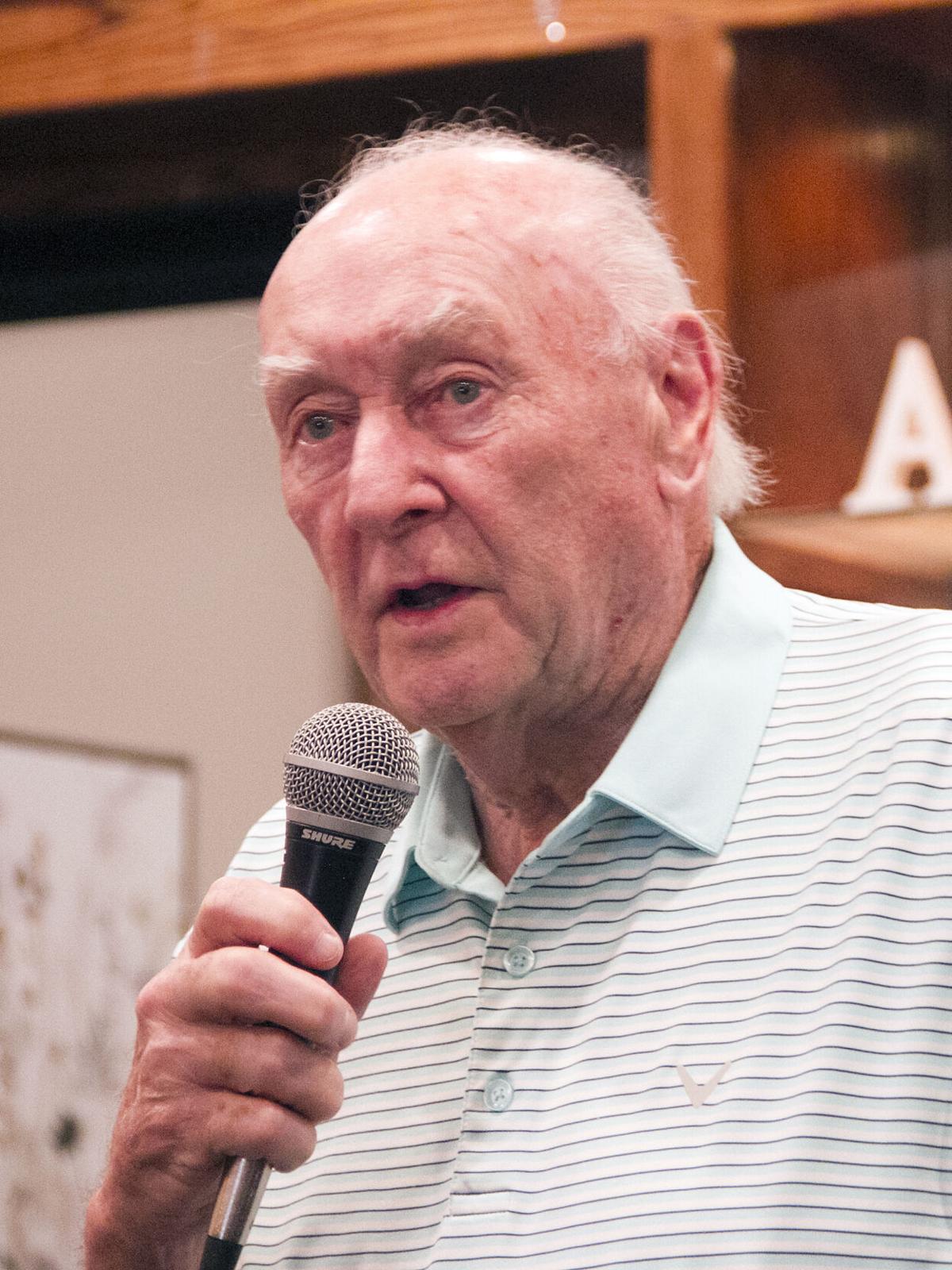 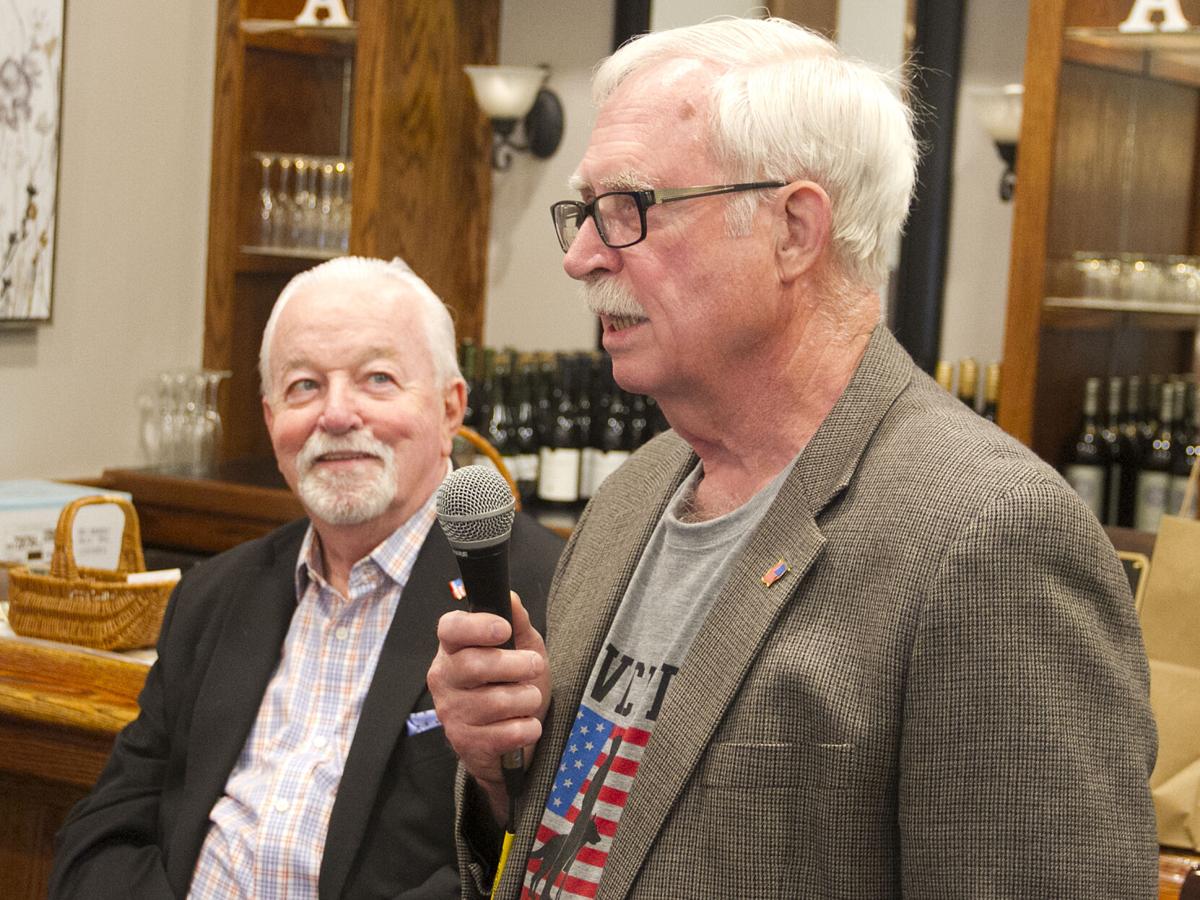 Joe Unitas shows a photograph he took of his cousin John at Baltimore's Memorial Stadium in 1992.

The ability of nonprofit organizations to raise money may have hit a snag during the COVID-19 pandemic.

But if the resumption of a monthly luncheon at Atria’s Restaurant in Peters Township is any indicator, philanthropy could be on the rebound as 2021 progresses.

Several years ago, author Jim O’Brien started gathering his friends and acquaintances from the Pittsburgh sports scene and beyond in a group he simply refers to as the Good Guys.

Beyond enjoying fellowship and talks by special guests – some Pro Football Hall of Fame inductees, for example, have showed up to share stories – the group has generated a considerable amount of cash toward a special cause: Life Changing Service Dogs for Veterans.

During the latest luncheon, at which attendance was limited because of pandemic guidelines still in place, guests donated $545. Plus more contributions were mailed to the organization, which partners with Florida-based Guardian Angels Medical Service Dogs Inc. to provide extensively trained canines for veterans’ companionship.

Life Changing Service Dogs was co-founded by U.S. Army veteran Tony Accamando, who has been receiving consistent support since explaining the project to his fellow Good Guys about five years ago.

Among the more involved supporters is Tom Anderson, who provided an update at Atria’s about Guardian Angels Medical Service Dogs’ plans to build a campus is Robinson Township, Washington County. The plan is to break ground in the spring of 2022, he said.

Anderson also reported that Jack Wagner, the former Pennsylvania auditor general who leads Guardian Angels’ development in the Pittsburgh area, has secured a $500,000 matching grant from the state, meaning an equal amount of dollars must be raised.

“That money has to be applied for actual construction. We can’t use any of that money for design or anything of that variety,” Anderson said.

Overall, fundraising for the partnering organizations has gone well, toward both the construction project and the training cost of approximately $25,000 per dog. And an opportunity to help the cause further is scheduled for June 5 at 31 Sports Bar and Grille, 1020 Washington Pike, Collier Township.

The establishment, owned by former Pittsburgh Penguins goaltender Ken Wregget – he wore No. 31, of course – is hosting a Meet and Greet from 12 to 2 p.m., featuring former pro football and hockey players, longtime sportswriter Ron Cook and rock ’n’ roll legend Donnie Iris. Tickets are $35 and include food and two beverages.

From 2 to 8 p.m. will be open admission, with donations toward Life Changing Service Dogs for Veterans accepted. Musical performances are scheduled as 1 to 2 p.m. Aaron Margaria; 2 to 4 p.m. Cross Creek; 4:30 to 5:30 p.m. Kelley Colopietro; and 6 to 8 p.m. Shady Mugs.

‘I’m still pulling for you’

Although he retired 48 years ago, Pittsburgh native John Unitas still figures in many a conversation about the all-time greatest quarterback.

What’s for certain is that his salary was mere pocket change compared with guys named Montana, Manning or Brady.

Joe, as it turned out, had an even more modest contract with the Colts.

“I signed for $75 a week because I was still trying out,” he recalled. “And they found out I had a heart murmur and they said, ‘We’ll see you, Joe. It was nice to know you.’”

As guest speaker at the Good Guys’ May luncheon, Unitas shared memories of his late, great cousin and of his own career as a professional photographer. Oh, and he happened to serve as director of lighting for a 1968 film called “Night of the Living Dead.”

“My mother had a camera, a little blue box camera, and I would take pictures with that,” he said. “I liked the sound of the way the shutter would open and let the light in. It was fascinating to me.”

So was the gridiron. Joe joined John for a two-Unitas University of Louisville football team, and they later paired up, however briefly, in Baltimore.

In between came a situation everyone in their hometown would like to forget.

The Pittsburgh Steelers drafted John in 1955, but cut him before he ever took a snap in camp. He subsequently played for a team called the Bloomfield Rams at $7 per game, as Good Guys host O’Brien informed those in attendance.

He also told about a chance meeting on Brookline Boulevard between Joe and Steelers owner Art Rooney, who assured the quarterback of an opposing team, I’m rooting for you, kid. Keep up the great work. I’m still pulling for you.”

Joe Unitas verified the story, and he had one to relate about the two future Hall of Fame quarterbacks whose teams squared off in Super Bowl III, which the Colts didn’t win.

“Johnny had a restaurant down in Baltimore called the Golden Arm,” he said. “And Joe Namath happened to be there one evening, and he said, ‘John, thanks for naming the restaurant after me.’”

In attendance at many a Good Guys gathering is Eddie Johnston, best known around Southwestern Pennsylvania as former head coach and general manager of the NHL’s Pittsburgh Penguins.

Around Boston, he’s known as the last goalie to play every minute of his team’s game throughout an entire season, and as a teammate of one of the sport’s true legends.

“Tell the story about when Bobby Orr’s father asked you to look after his son,” O’Brien prompted Johnston at the latest luncheon.

“I said to Mr. Orr, ‘I don’t know if you have the right guy to have your son stay with me.’ And he said, ‘Well, everybody told me you’re the guy they recommend,’” Johnston said.

“He stayed with me for a couple of years. He never took a drop of drink until he was 21.”

Johnston recalled Orr giving him rides to and from downtown Boston.

“Here’s the best player in the game chauffeuring me around a little bit,” Johnston said. “He was the best man at my wedding. He’s godfather to my son, and likewise with him and his wife, Peggy. We’ve had a great, great relationship.”

In 1984, Johnston was at the helm when the Penguins drafted center and now-owner Mario Lemieux, whom he compared to Orr.

“Off the ice, they’re two special people. They do a lot of things nobody knows about for ex-players and charities,” Johnston reported, adding that as player, “Mario was probably the best penalty killer in the league, for years and years.”

“He reminds me a lot of Orr, for the simple reason that he’s the first guy on the ice and he’s the last guy off,” Johnston said. “And you lead by example when you do that.”