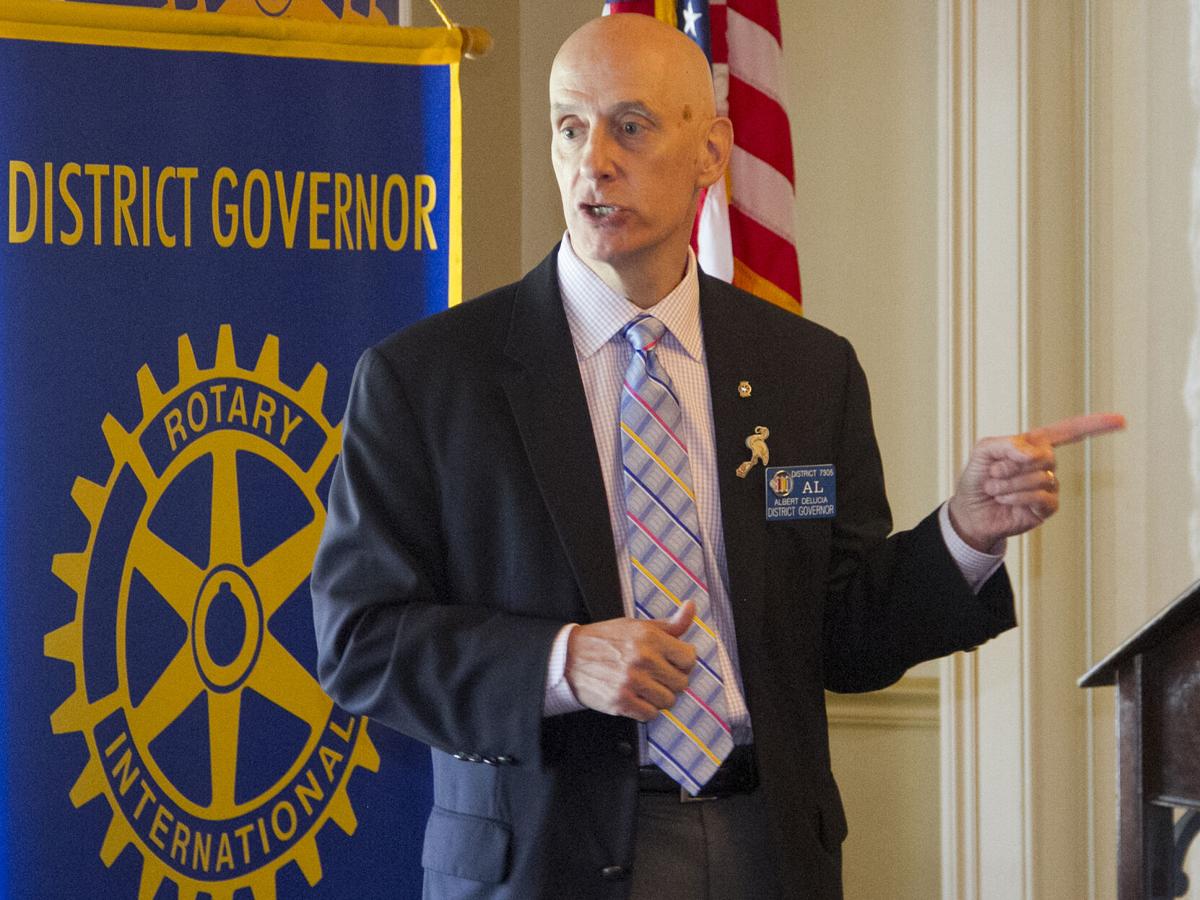 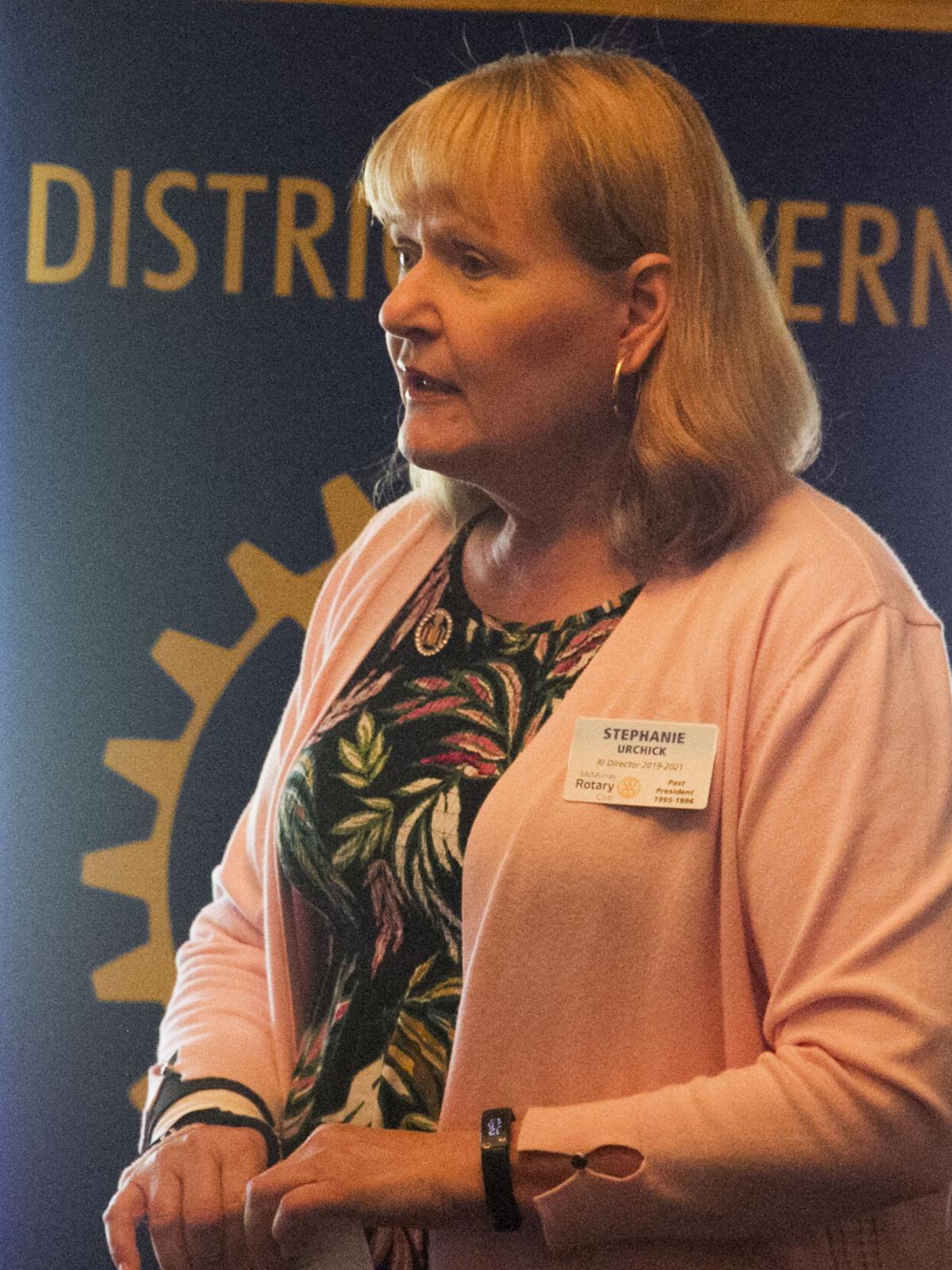 Stephanie Urchick speaks prior to introducing Al DeLucia as the new district governor.

Eradicating a life-threatening disease has been a primary goal of Rotary International since the launch of its PolioPlus project in 1985.

Along with ensuring vulnerable children receive the oral polio vaccine – the count now stands at more than 2.5 billion – the initiative has supported other facets of the fight including research, education and providing necessary supplies.

“Now, the ‘plus’ is COVID-19,” Al DeLucia said. “The world is looking at Rotary to say, how did you do polio? How can that knowledge, how can that army of volunteers that you have, help us in combating COVID-19 worldwide?

“There’s no organization out there that has the person power that Rotary does in disease prevention and treatment, because of polio.”

In the midst of the COVID-19 pandemic, DeLucia has taken over as governor of Rotary International District 7305, which encompasses southwestern Pennsylvania counties including Allegheny, Fayette, Greene and Washington.

The resident of Bethel Park recently paid his first official visit as district governor to the McMurray Rotary Club, of which he is a 29-year member. During his presentation, he discussed the club’s merits in the context of the 2020-21 international theme, “Rotary opens opportunities.”

“Some people say that every challenge is an opportunity, and that’s the way we have to look at it, because we do have a significant number of challenges,” he said. “We can show how we can increase our ability to adapt. If we look back six months ago, we would have never thought that we’d be meeting here and like this.”

Club members were gathering at Valley Brook Country Club in Peters Township, with safety protocols in place, because COVID-19 has prevented the regular venue, Atria’s Restaurant, from hosting sizable gatherings.

“We did not even think about doing virtual meetings,” DeLucia said. “Now, they’re a standard operating procedure for us.”

He acknowledged the roles of club members David Wylie, 2019-20 president, and Greg Incardona in quickly organizing weekly meetings through a videoconferencing platform, to a large degree of success compared with clubs that waited until they were able to resume meeting in person.

“They don’t have as many people coming as they used to, because their members weren’t quite as engaged as we were, meeting virtually and having basically what was a regular meeting, only we were doing it through Zoom,” DeLucia said.

The 2020-21 club president, Kate Cole, has drawn on the experience to change the club’s monthly schedule of meetings at 12:10 p.m. Wednesdays: Two are in person and streamed live, and another is conducted virtually.

The remaining meeting date is dedicated to service projects, launched in July with the packing of “birthday bags” for children through Greater Washington County Food Bank.

A certain demographic has drawn the attention of the current Rotary International president, Holger Knaack of Schleswig-Holstein, Germany.

“He wants to see more women in leadership,” DeLucia reported, and McMurray is setting a good example in that regard, too. Sandra Castro served as the club’s first female president, in 2017-18, and Marcy Santel will succeed Cole in the top position starting in July.

And club member Stephanie Urchick serves as one of only 17 Rotary International directors worldwide, leading Zones 33 and 34, an area that extends from Pennsylvania to the Caribbean. When she was in the California club, Urchick served as the first woman governor of what then was District 7330.

“There are certain qualities that are necessary to be a district governor,” she said prior to introducing DeLucia at Valley Brook. “Some of them, you can imagine, are typical leadership traits that you would see in any business leader. Many of you have them, yourselves.

“But to be a Rotarian is even a little bit more special, because we are a group of volunteers. There are no ‘carrots.’ We don’t get paid to do the good work that we do around the world,” Urchick continued. “Al has certainly, in all the years that I’ve known him, shown those abilities and those skills and those talents.”

DeLucia also has the distinction of being the first member of McMurray Rotary Club to serve as governor, despite the reputation that the club has earned since forming 55 years ago.

“Clubs around our district and now in our zone look at us and say, that’s what we should be doing,” he said. “That’s how you serve your community. That’s how you reach out and make an impact.”